Why Stealing Art Is a Terrible Idea 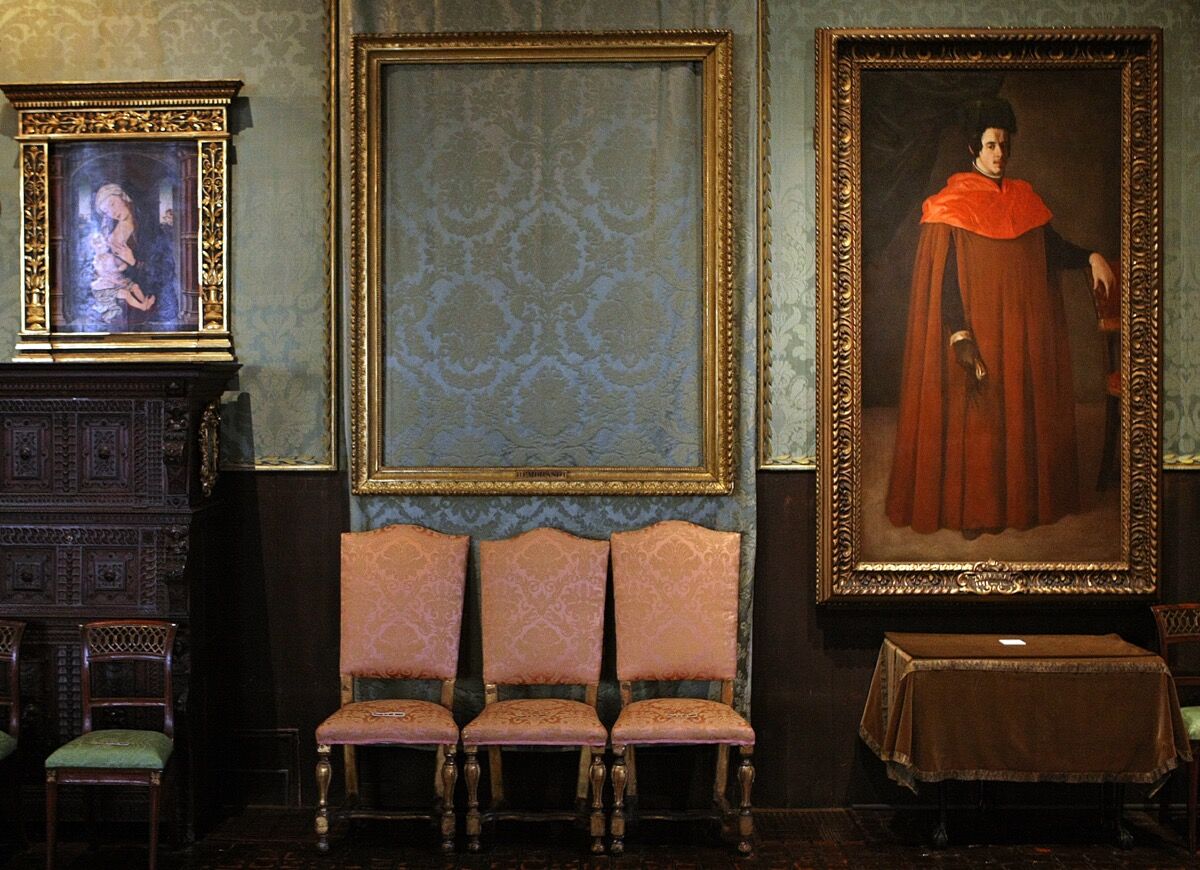 BOSTON - MARCH 13: An empty frame for Rembrandt’s ‘The Storm On The Sea Of Galilee,’ circa 1633. The anniversary of the big heist of 19th century masterpieces, still missing, is coming up. (Photo by David L Ryan/The Boston Globe via Getty Images)

On a chilly winter day in Stockholm, Sweden, in late December 2000, the city’s National Museum was quiet. Three armed, masked thieves approached the institution, entered, and stole a
Rembrandt
self-portrait and two
Renoir
paintings. The trio had laid down nails on nearby roads to ensnare police cars responding to the scene, and set off two small car bombs as a distraction. They made their escape, with the three paintings, on a boat moored nearby.
This may sound like a rousing success, but the thieves had not yet begun the most challenging part of the art heist—offloading the stolen goods. “[Criminals] don’t realize the real art in art theft isn’t the stealing, it’s the selling,” retired FBI agent and author Robert K. Wittman tells me. He was part of the art crime team that eventually recovered the Rembrandt painting roughly five years later, after the FBI got a tip from a drug dealer in Los Angeles. The painting was still in its original frame, hidden in the back of a Denmark apartment.
While this case may seem more like a movie plot than the vastly more common smash-and-grab burglary turned art theft, these remarkably brazen criminals found themselves facing the same challenges a more modest art thief encounters. That is, how to get rid of the stolen artwork and make a profit?

Hollywood-style thefts are far from the norm. “Art thieves are just your average, everyday criminals,” says Timothy Carpenter. As a special agent of the Federal Bureau of Investigation’s art crime team for the past nine years (and now supervisor), he would know. Carpenter has ostensibly seen every type of art crime there is—from forgery, to theft, to antiquity smuggling.
He’s quick to point out that people who snatch art are generally not connoisseurs. There are exceptions (like the “spider-man” burglar who nicked paintings that struck his fancy from a Paris museum), but by and large, “most of these guys break into houses looking for the usual stuff—guns, drugs, money—and maybe they stumble across a piece of art,” he says.
While art theft is legally equivalent to any other property crime, stealing a painting or sculpture is special. Unlike cars or cash, most art is one of a kind. This poses a great challenge to thieves looking to unload stolen artwork, but also to investigators like Carpenter, who are tasked with tracking down singular objects that have irreplaceable public and historic value.

Typically, art thieves are also not so well-versed on how art is valued; they’re blinded by the dollar signs in news headlines. “These thieves are looking to cash out quickly and they don’t think about the next step,” explained Christopher A. Marinello founder of Art Recovery International.
Because of its unique nature, art is nearly impossible to sell through legitimate channels without being noticed. This is mainly due to law enforcement and private databases that track stolen art. And reputable art dealers—who are essentially the only pathway to the multi-million-dollar returns that thieves salivate over—use these tools and alert police when a possible theft case arises.
The sheer difficulty of selling stolen artwork pushes price tags way, way down, to just 5% or 10% of the value on the open market—and that’s if a thief can find a buyer at all, Marinello says. He worked on a case in which a work by Henri Martin, valued around $150,000, was stolen from a U.K. country house. Someone called him from Canada and offered to sell the piece for $20,000. Marinello refused (he doesn’t pay for stolen art) and alerted the police. Two years later a dealer who had bought the work thinking it was fake grew suspicions and contacted Marinello, who confirmed it was stolen. The thief had sold it for £1,000. “Eventually they settle for whatever they can get,” he says.

Recovering stolen art isn’t easy, either. Police working the art crime beat face a lack of resources compared to other areas, but databases are instrumental tools in improving how work is recovered. In 2015, Marinello helped launch Artive, a nonprofit database that tracks stolen art. Auction houses and other art dealers can access Artive to check if a work coming through their shop is wanted in connection to a crime (private companies are charged a small fee, but law enforcement can use the service free of charge).
Rapidly improving technology and improved international cooperation between police are helping make already difficult art sales even harder. Artive uses picture recognition—which as of yet the FBI doesn’t have in its internal database—to ensure that a thief doesn’t change the title of the work to evade tripping alarms.
The challenge criminals face when selling art might seem like purely an asset to law enforcement, but an essentially unknown work taken from a private home can usually still be bought and sold easily. And just because a work has been reported stolen, it doesn’t mean a reputable dealer will always be able to know. A stolen
Norman Rockwell
, recovered in March by the FBI in Philadelphia after 40 years, hung on the walls of an unassuming antiques dealer, who didn’t realize the piece was illicit property until he saw a news story on it.
The publicity generated by high-profile thefts isn’t always helpful, though. Yes, it puts the art world on the lookout, but as Carpenter said, it can hinder investigations by pushing art underground, away from the open market and into thieves’ closets, making the art ever more difficult to recover.
To unearth such pieces, the FBI has the traditional range of tools at its disposal—everything from databases to undercover operations to forensic analysis. But just as thieves don’t typically have art history degrees, nor do the 22 or so agents on the FBI’s art crime team who are hunting art down (the team’s size is a number Marinello and others would like to see increased). “What I prefer on the team is just to have a good investigator,” says Carpenter.

Along with apprehending the criminal, Carpenter and those at the FBI are also thinking about the safety of artworks. He recounted the story of the theft of a roughly $1 million
Juan Gris
painting from early on in his career. Some “mopes” broke into a home as part of a residential burglary and grabbed the Gris, which happened to be the first painting they saw (in a testament to the importance of Art History 101 classes, they didn’t think much of the
Picasso
hanging right next to it, which was worth five times as much).
After investigating the theft, Carpenter and his team were able to recover the Gris and apprehend the criminals. But in talking to them, the FBI learned that they were involved in another theft of a separate Picasso. The thieves apparently became aware that a different law enforcement agency—not the FBI—was on their tail, so they allegedly doused the Picasso in lighter fluid and set fire to it. This is the worst outcome, and it’s something the FBI art crime team actively works to avoid.
“You don’t want to do something that’s going to jeopardize that piece of art because it’s gone forever,” Carpenter said. “So yes, there is a difference in the way that we work these theft cases.”
Isaac Kaplan is an Associate Editor at Artsy.

An earlier version of this article stated that Timothy Carpenter has supervised the Federal Bureau of Investigation’s art crime team for the past nine years. He has been an agent on the team for nine years and is now the supervisor. The article also incorrectly described Artive as the first nonprofit database for tacking stolen art.