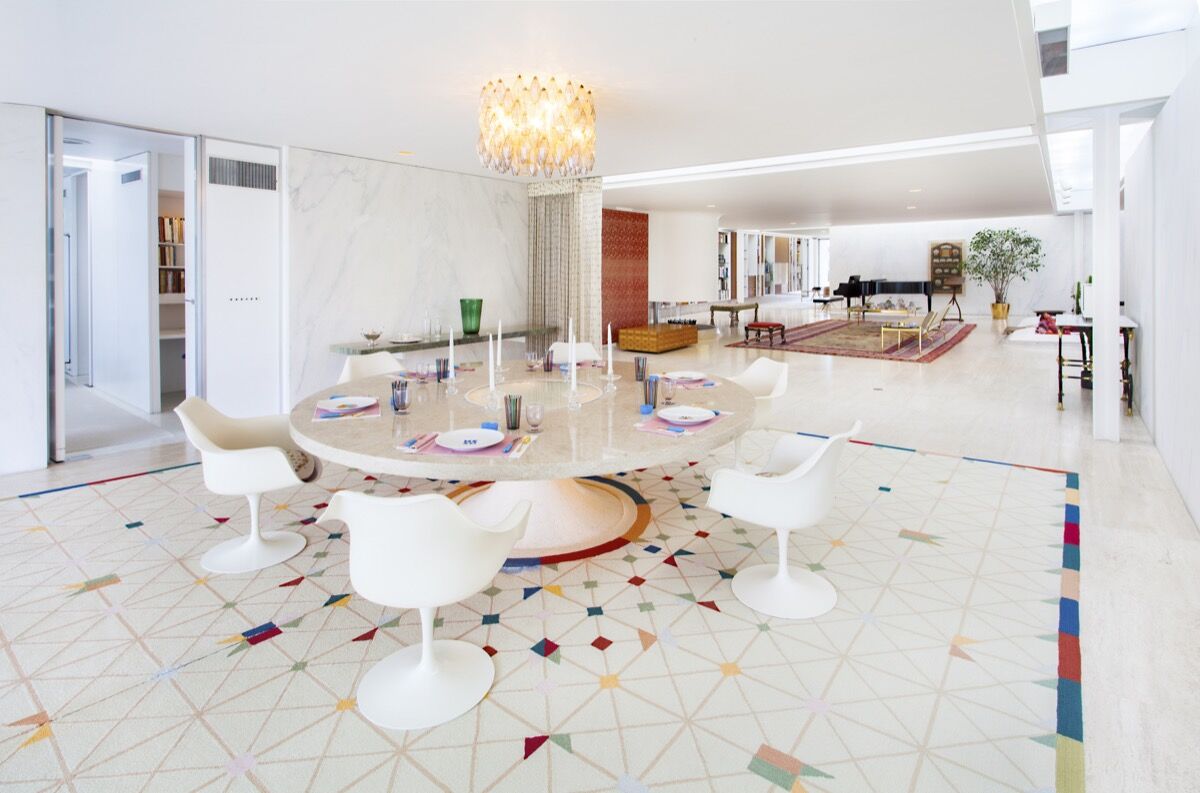 It’s one thing to own an architecturally significant home by one of the greatest 20th-century modernists, but it’s quite another for that home to be designated a National Historic Landmark while you’re living in it. Yet such was the reality for Joseph Irwin Miller and his wife, Xenia, when their iconic home, designed by
Eero Saarinen
& Associates in Columbus, Indiana, was bestowed the honor in 2000.
“It always felt like a home,” recalls Aaron Schiller, one Miller’s ten grandchildren who frequented the house every Christmas, and who now runs his own architectural practice in New York. “It was a very proper, well-ordered Midwestern home, but it was a very comfortable place—it wasn’t a ‘don’t touch anything’ house by any means.”
That has changed in recent years. The entire Miller House property, which was completed 60 years ago, was formally donated to the Indianapolis Museum of Art after Xenia’s passing in 2008. Following a $2 million restoration of the Saarinen-designed property, the Indianapolis Museum of Art opened the residence to the public for the first time in May 2011.
One of few single-family residences by the celebrated Finnish-American designer Eero Saarinen, the Miller House remains a key example of midcentury modern residential design. A friend of the Millers, Saarinen had already designed a summer home for the family a few years prior in Ontario, Canada.
The Millers were great industrialists and ardent supporters of modern architecture and the local community, commissioning numerous buildings by leading designers like
Richard Meier
, Harry Weese, and
I.M. Pei
elsewhere in the city. For the Columbus house, they sought a primary, year-round residence at which they would also host family gatherings as well as meetings with business associates. 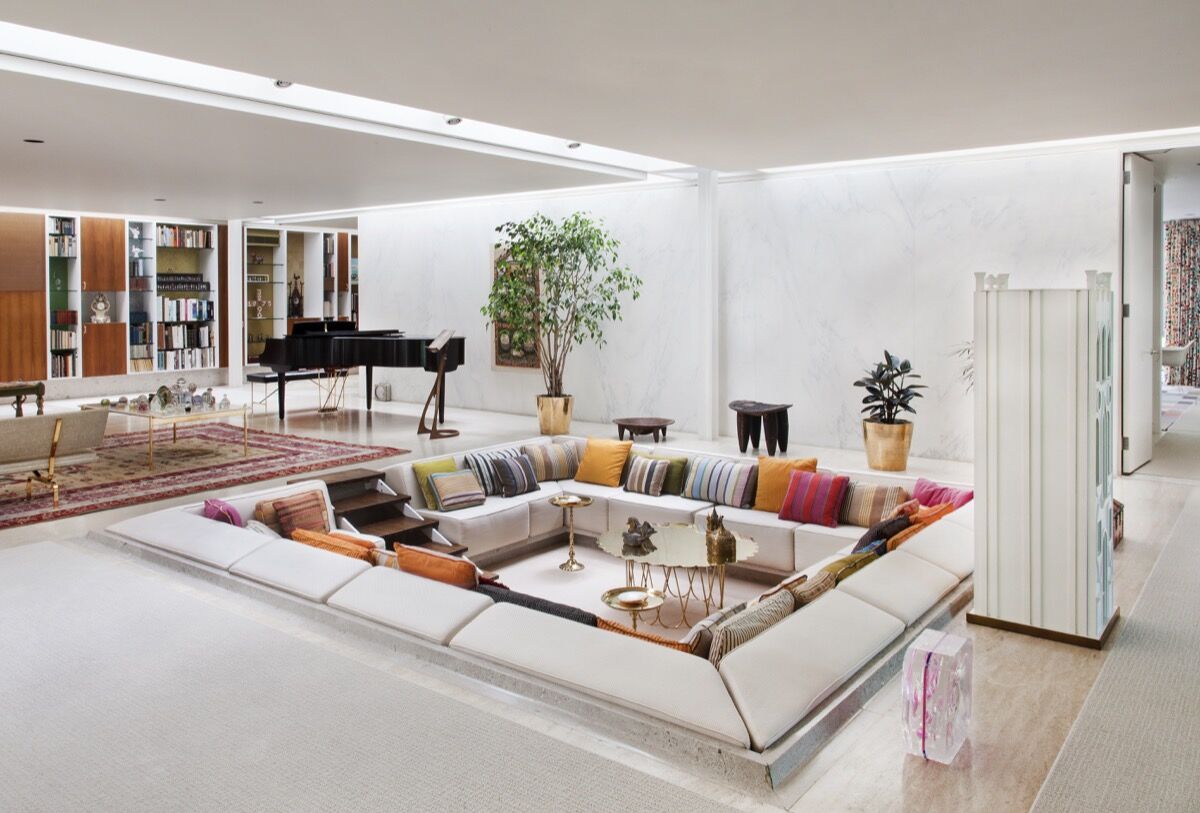 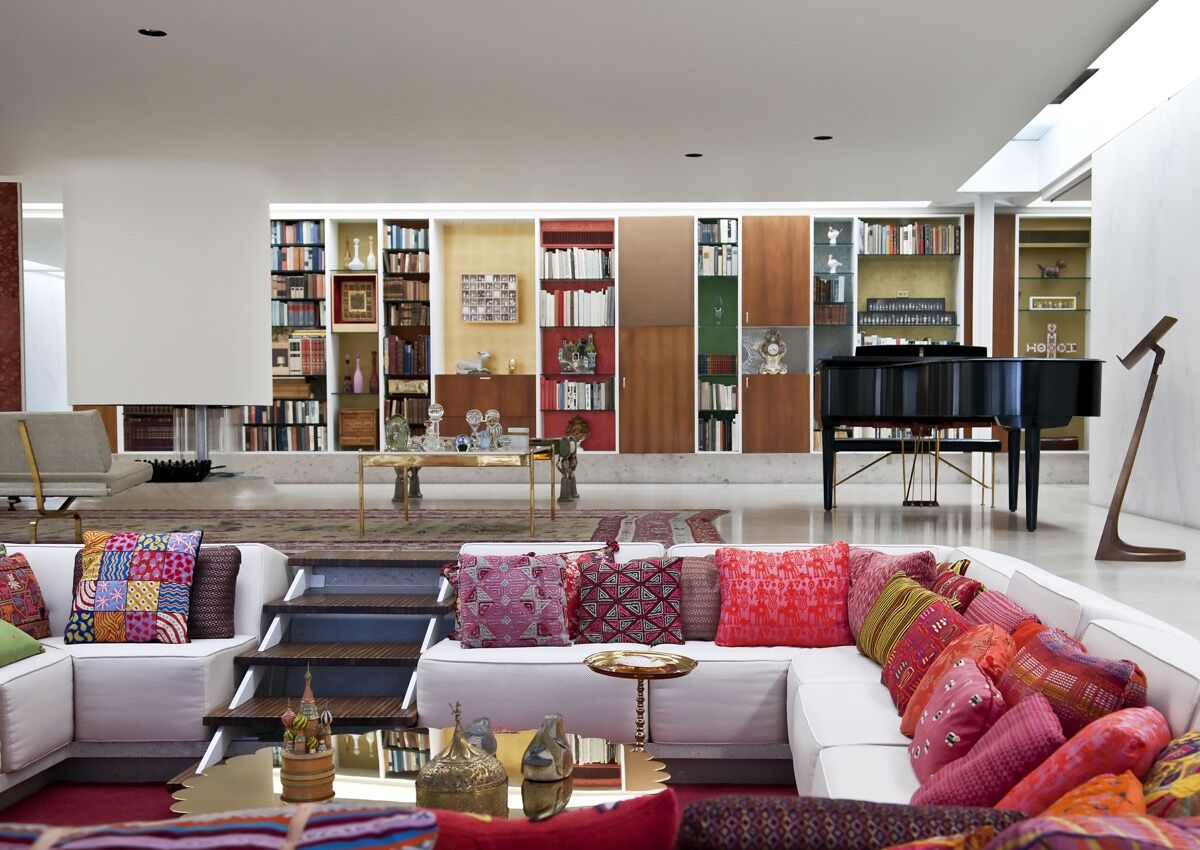 Design devotees are likely to recognize the Miller House for the iconic conversation pit that Saarinen designed for the living room: a communal seating area that is recessed into the marble floor, lined with plush white banquettes, and richly colored textiles that changed palettes with the seasons. It’s a vivid, era-defining image that has transcended into pop consciousness. But it is just one part of a capacious, 6,838-square-foot structure on an expansive 13-acre property.
The team behind the Miller House’s design involved several key talents beyond Saarinen himself. Pritzker Prize-winning architect Kevin Roche, then a principal associate in Saarinen’s office, played a pivotal role; landscape architect Dan Kiley designed the expansive and neatly geometric gardens, which feature an elongated allée of honey locust trees and interpret the home’s gridded floor plan to its outdoor environs. Alexander Girard, an interior designer with a penchant for folk art, appointed the interiors and worked as a color consultant, even creating a “textile master plan” for the residence.
“Girard’s elements are really the thing that has affected me the most,” reflects Schiller. “The textiles, the eye for color, the combination of warm and cold—the ability for a piece of architecture to at once be present or recede, and take on the warmth of the materials.” Girard developed a long-standing working relationship with the Millers for over 15 years, adjusting and evolving the interior through the seasons and along with the family’s lifestyle.
It should be noted that Saarinen, who passed in 1961, had already produced many of his iconic works when the Millers commissioned him to design their home in 1953. He designed the 630-foot-tall, Gateway Arch monument in St. Louis, Missouri, in 1947 (though it was not completed until 1965), as well as the Womb Chair for Knoll, which remains in production today. Along with the Pedestal armchair and table (commonly called the Tulip Collection) he later designed in 1956, and the TWA terminal at New York’s John F. Kennedy Airport, completed in 1962, the curvilinear, jet-age contours of these signature projects embodied the organic yet neo-futurist aesthetic for which he became known. 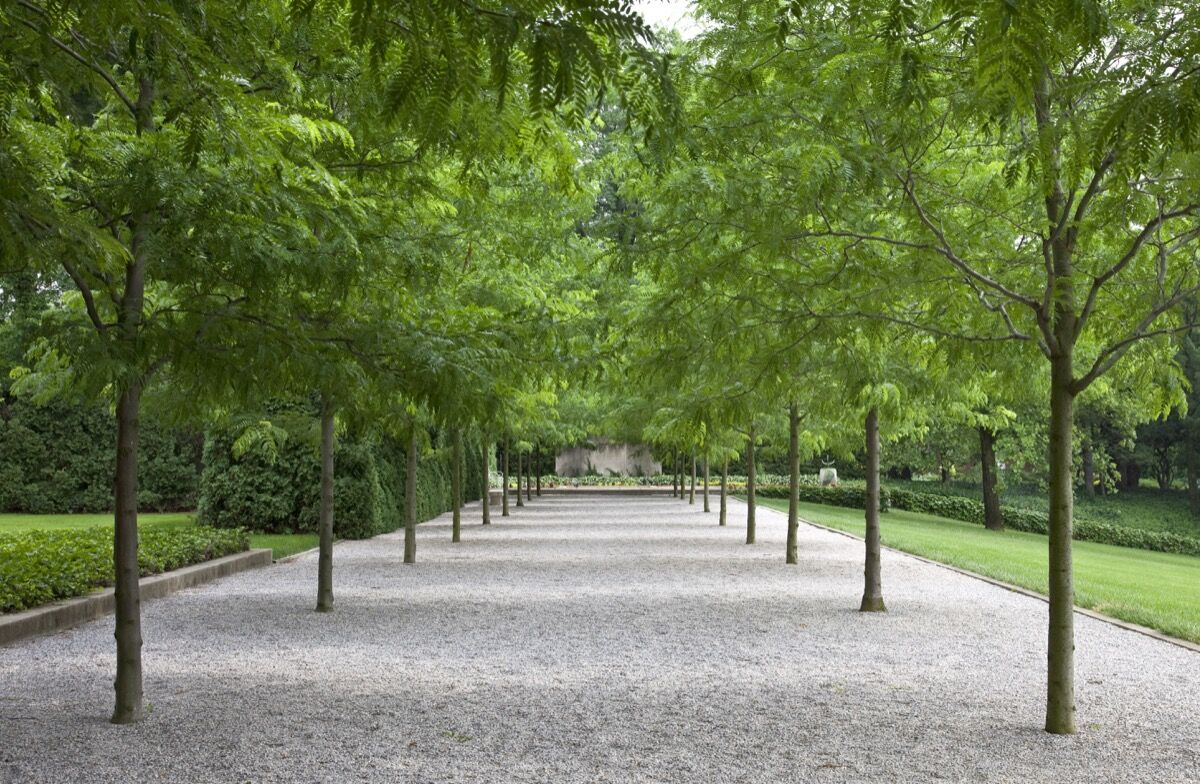 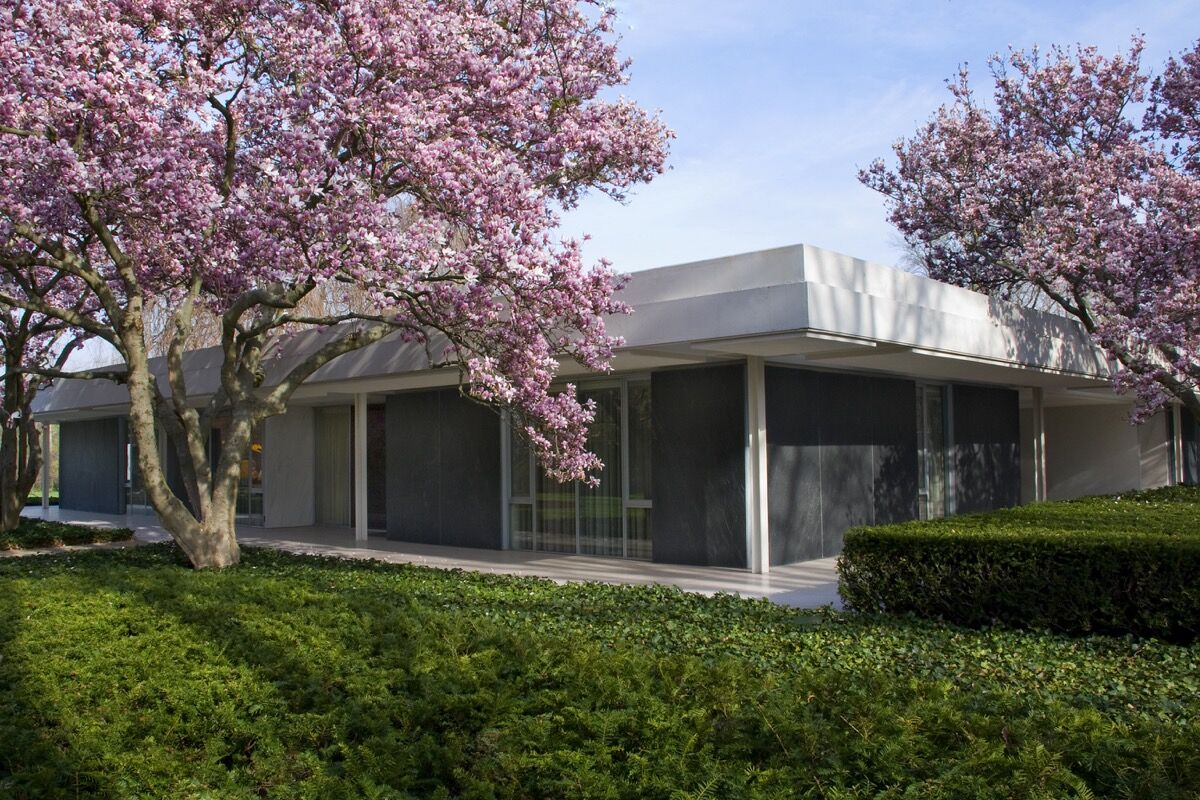 Advertisement
At the Miller House, however, Saarinen and Roche’s work follows the tradition of International Style modernism, with its flat roof, wide expanses of glass windows and slate walls that form a rectangular, open-plan structure. For Schiller, his grandparents’ home only later became a point of intellectual and academic interest during graduate studies at Yale’s School of Architecture.
In a research paper that has been cited by architectural historian Peter Eisenman and critic Suzanne Stephens, Schiller situates the Miller House in conversation with the rigid rectilinear structures by figures such as
Mies van der Rohe
and
Philip Johnson
, both of whom had pushed the boundaries of residential architecture, respectively, with the Farnsworth House (completed in 1951) and the Glass House (completed in 1949). Schiller argues that through the home’s interior pinwheel arrangement—which takes
Palladio
’s nine-square grid plan as its general basis and gently revises it—offers a subtle progression and subversion of earlier modernists, adding movement to the stringent box.
While his ties to the home remain personal, Schiller, who last visited the property in October as a guest of the inaugural Exhibit Columbus symposium, believes the home now belongs to the wider design community, and is excited about the scholarship that may come from it. “There’s such a deep intellect at play there,” says Schiller.
“All I have to do is think about that house and know that I have so much more work to do as an architect to be any good at all. If anything, that house is just intimidating as hell.”
Aileen Kwun
Related Stories