The Myth of Jackson Pollock, Peggy Guggenheim, and the Masterpiece Created in One Night 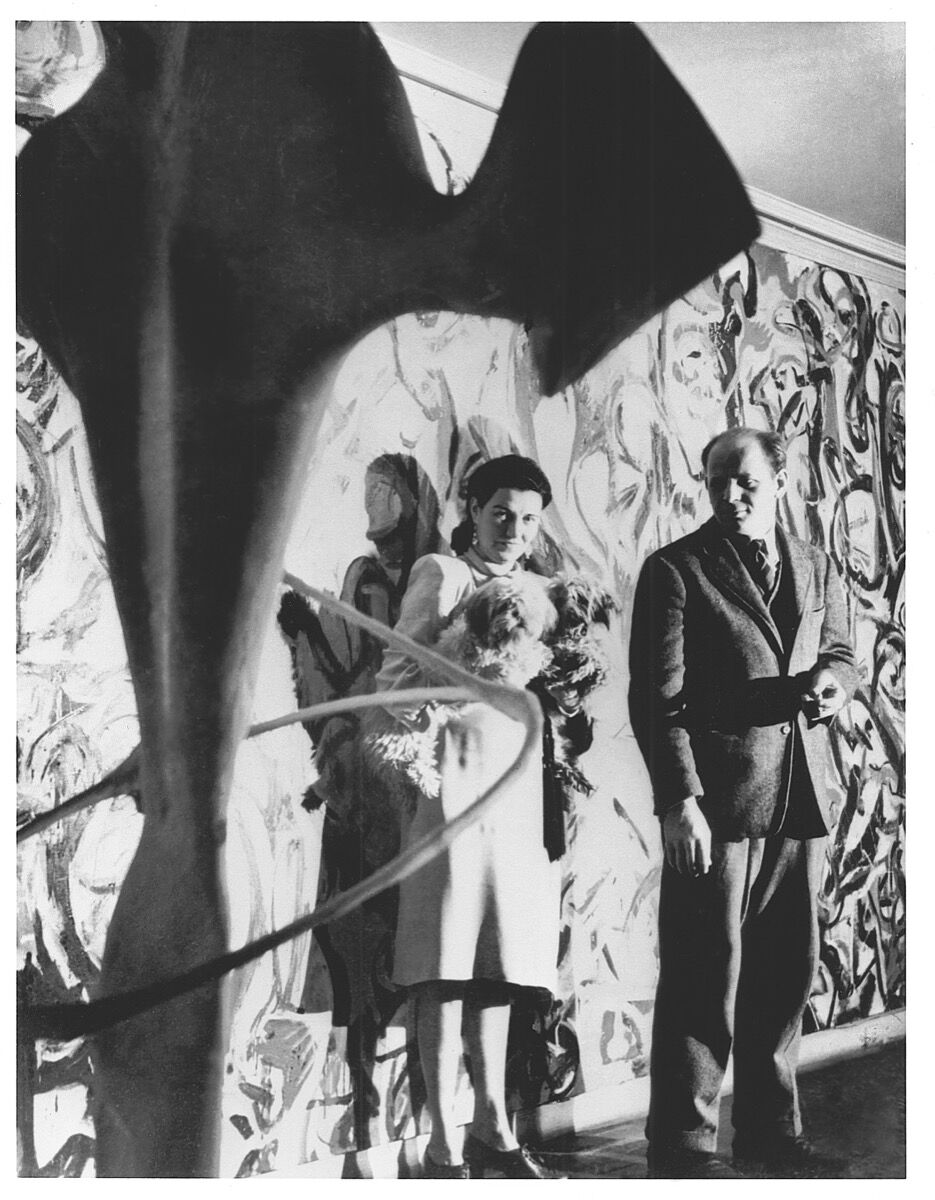 Peggy Guggenheim and Jackson Pollock in front of Pollock’s Mural, 1943. © Foto George Kargar. Image courtesy of The University of Iowa.

In the summer of 1943, Peggy Guggenheim commissioned a young
Jackson Pollock
to paint a mural for her Manhattan townhouse. At this point, the artist was relatively unknown—he had yet to receive a solo show, and he was years from producing the first of his iconic drip paintings. Guggenheim herself was ambivalent about his practice, persuaded instead by her assistant Howard Putzel and
Marcel Duchamp
, who both saw promise in the artist’s small-scale works.
The commission came with a contract, rare at the time, of $150 per month. The money was much-needed, as Pollock and his future wife
Lee Krasner
(a painter in her own right) were barely scraping by in their shared New York apartment.
The problem was, Pollock couldn’t get started. As Krasner told it, he stared at the blank canvas for days that turned into weeks that turned into months. Guggenheim, at first simply concerned, became increasingly frustrated with his progress. She finally gave Pollock an ultimatum: Finish the painting for a party I’m throwing in January, or your stipend is history. When Krasner went to sleep the night before the deadline, Pollock still hadn’t made a single mark. She was certain that his career was over.
When she awoke the next morning, the 160-square-foot canvas had been transformed into a frenzy of energetic brushstrokes. Teal, yellow, red, and black marks looped and whirled on a white background, a vision Pollock later described as “a stampede...[of] every animal in the American West, cows and horses and antelopes and buffaloes. Everything is charging across that goddamn surface.” Pollock rolled up the canvas and delivered it to Guggenheim’s apartment with hours to spare.

“It’s a great myth. And it’s a terrific story,” acknowledges Pollock scholar Ellen Landau. And for years it was accepted as fact. Krasner offered the original account of that fateful night, which was later corroborated by Guggenheim and critic Clement Greenberg. It was cemented in Jackson Pollock: An American Saga, the Pulitzer Prize-winning biography written by Steven Naifeh and Gregory White Smith, and published in 1989. But as research conducted by the J. Paul Getty Museum and the Getty Conservation Institute proved conclusively in 2014, the tale is certainly exaggerated.
A team of technicians determined that the work was painted over a period of weeks, identifying several layers of paint that dried between applications. That wasn’t the first time someone had poked holes in Krasner’s story—in the catalogue for the Museum of Modern Art’s 1998 Pollock retrospective, a footnote expressed serious doubts. But the Getty’s two-year-long analysis of Mural offered concrete scientific evidence that the work was not painted overnight. That’s not to say, however, that the story is completely false. “It looks as if Pollock did finish some kind of initial composition over much of the canvas very rapidly, perhaps even in a single all-night session,” noted Tom Learner, head of science at the Getty Conservation Institute.
Dispelling this myth has not diminished the painting’s art-historical significance, either. “Mural certainly is considered to be a pivot because it’s his first large painting,” Landau notes. “Although it still includes a lot of the kind of mythic imagery that Pollock was painting in the early 1940s, the areas of loose paintwork give you glimpses of what the future’s going to be.” It was the first time that the artist experimented with commercial paints, for instance. Among the high-end artists’ oils used in Mural (most likely supplied by Guggenheim), Getty researchers discovered swatches of white house paint. And while Pollock used a brush for most of the composition, he heralded his later drip techniques by flicking pink paint onto portions of the canvas. He would eventually lay his works flat on the floor and stand over them, but in this case he probably flung the paint at an upright canvas.
Mural would not only be Pollock’s first large painting—it would be his largest. So large, in fact, that he and Krasner were forced to dismantle one of their apartment walls to fit the canvas inside, secretly carrying chunks of plaster to the garbage cans at night so as not to alert their neighbors. Greenberg, who would become one of Pollock’s prominent supporters, loved it. “I took one look at it,” Greenberg said later of Mural, “and I knew Jackson was the greatest painter this country had produced.”
Although it hung for several years in Guggenheim’s apartment, when she moved back to Europe following the end of World War II, the massive painting needed a new home. Guggenheim eventually gifted Mural to the University of Iowa, where the correspondence concerning the cost of its delivery is amusingly cavelier—particularly considering the work’s current estimated worth of around $140 million.
“The price of $40 to pack it seems rather exorbitant,” the head of the university’s art department wrote in December of 1948. “I wonder if you could see if it could be taken care of for less.” Following this letter, he seemed to promptly forget about the work; letters resume more than two years later, when he finally agreed to the shipping fee. 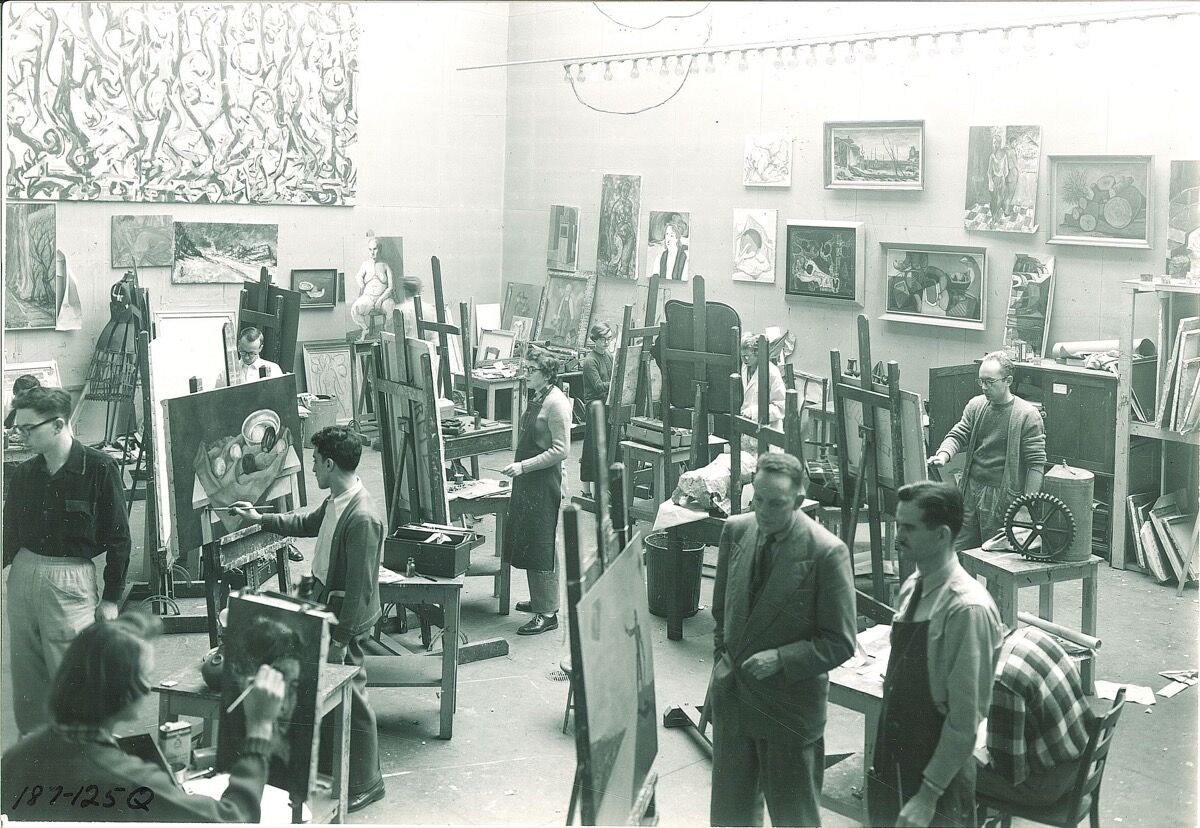 Advertisement
Since then, the work has continued to inspire. “Like Michelangelo or Picasso, there are endlessly interesting things you can say about Pollock,” Landau says. “Some artists, once you’ve said it, given their biography, that’s it. Pollock is someone that subsequent generations continue to find new and refreshing.” Perhaps the most recent example of this phenomenon is Kanye West’s music video for “Famous,” featuring a sculpture of 12 American pop culture icons lying naked side-by-side in bed. West’s animatronic sculpture was inspired by a painting by
Vincent Desiderio
, which in turn took cues from Pollock’s Mural.
“A British columnist once said that if Jackson Pollock hadn’t existed, then Time-Life would have had to invent him,” Landau continues. “There’s a whole range of mythic ideas about what an artist is that converge in Pollock.”
—Abigail Cain
Related Stories

How Pollock, Picasso, and 7 Other Iconic Artists Overcame Creative Block 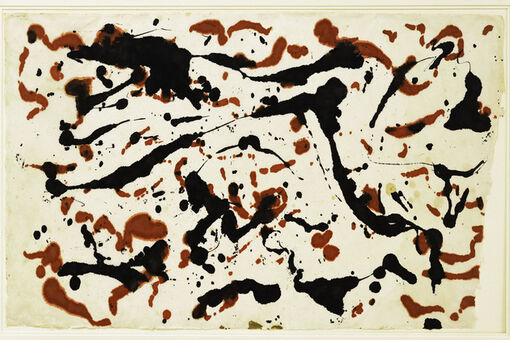 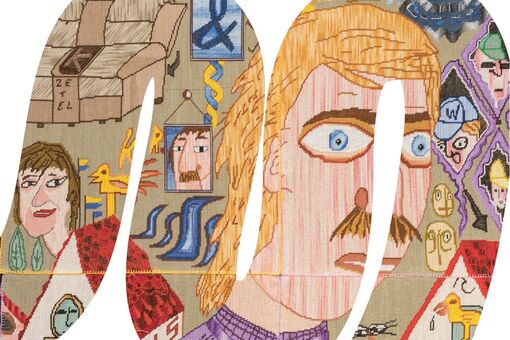 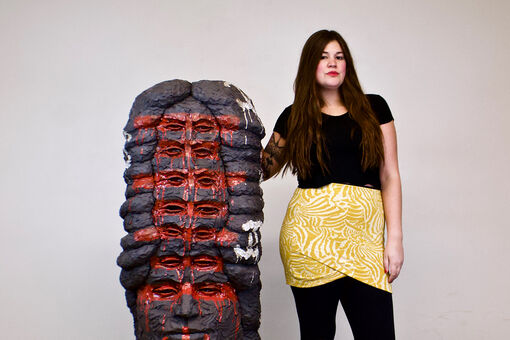 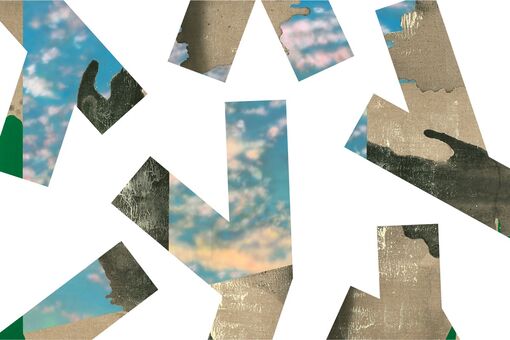