Storytelling With Ceramics at Maison Gerard 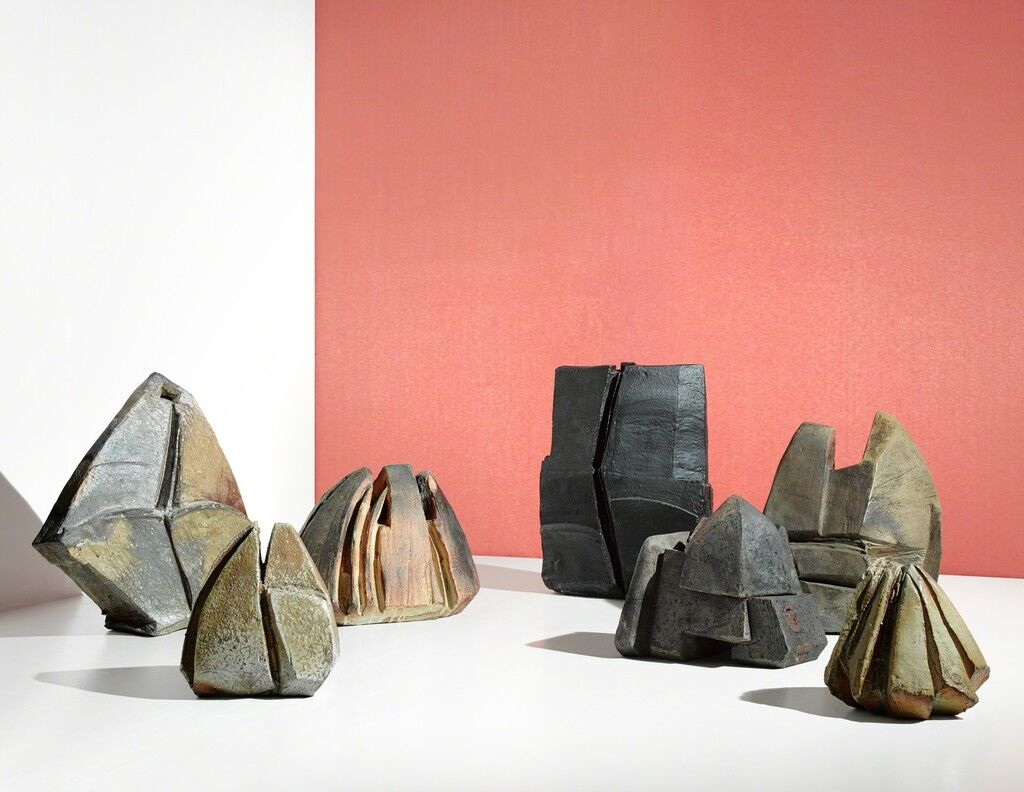 Installation view of works by Eric Astoul in “Out of the Fire,” Maison Gerard, New York. Courtesy Maison Gerard and the artist

In the catalogue for Maison Gerard’s new show, director Benoist Drut credits collector Pierre Staudenmeyer and gallerist Patrick Mignot for his love of ceramics. It is an eye-opening preface to what is ultimately a very personal show for Drut. Titled “Out of the Fire,” the exhibition focuses on the recent work of
Eric Astoul
,
Guy Bareff
, and
Nadia Pasquer
, three contemporary French ceramists responsible for Drut’s discovery and eventual obsession with the medium. All late in their careers, the artists are a natural fit. Equally skilled in their craft, they share a resplendently refined sense of abstraction that unites them in spirit rather than aesthetics. 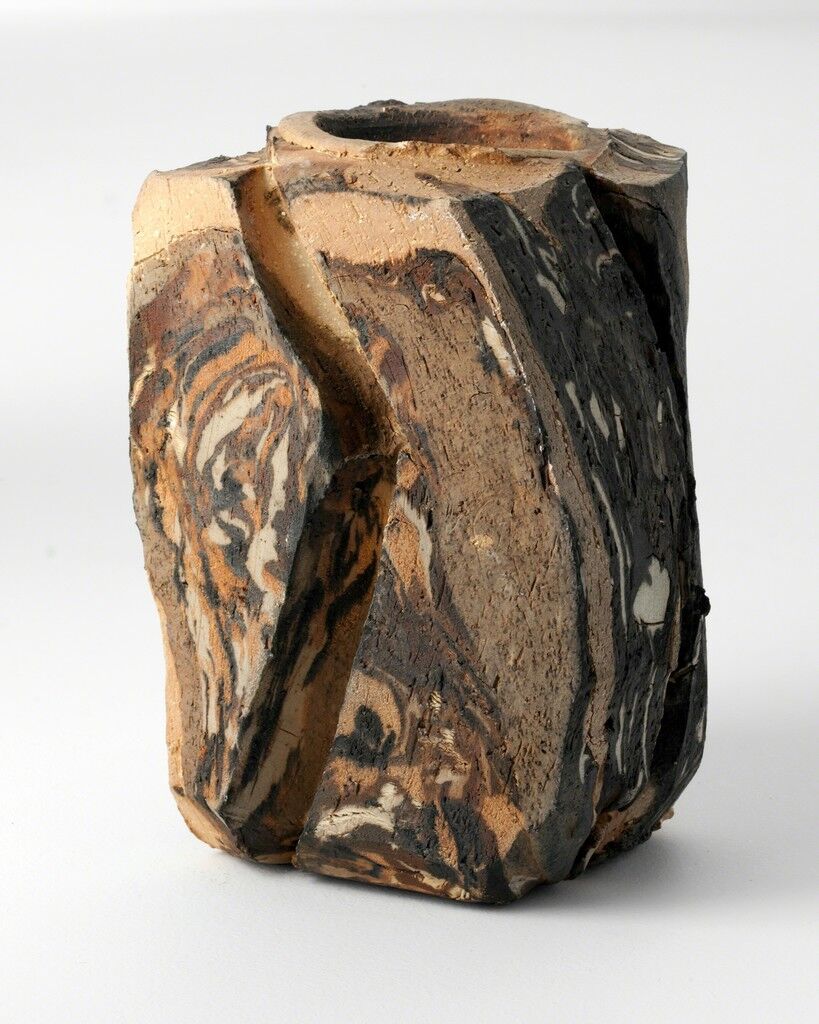 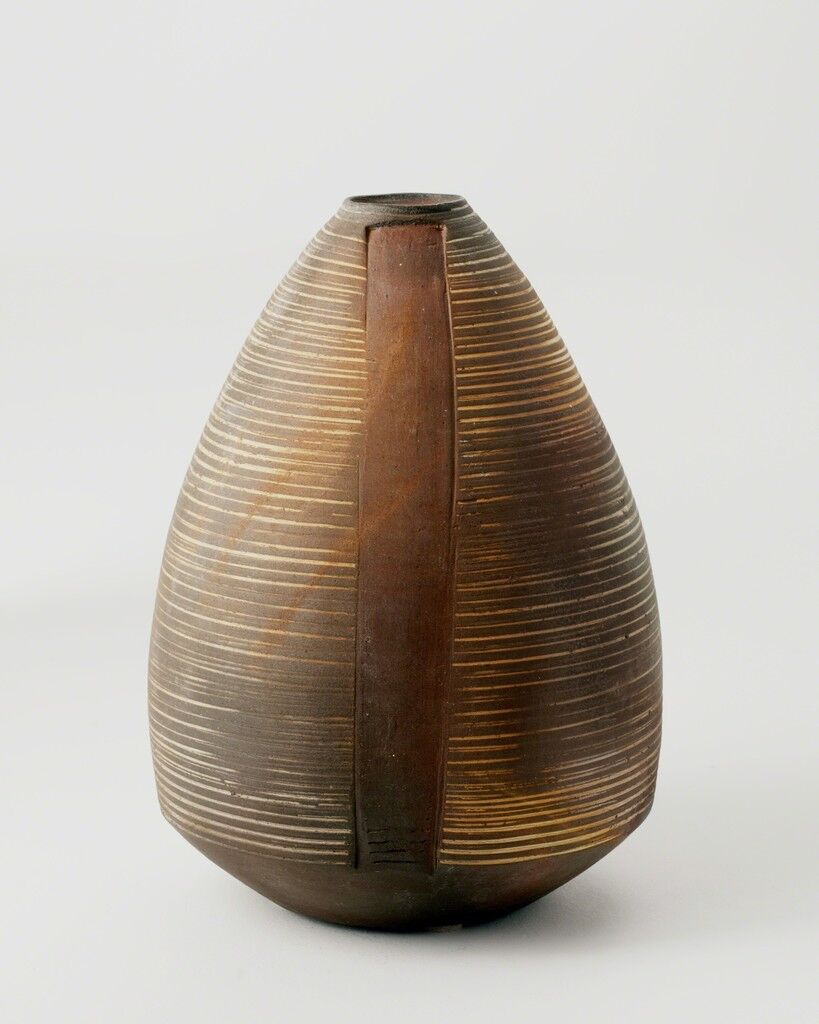 Eric Astoul
Vase ovoïde, 2010
Maison Gerard
Drut’s story begins with the work of Eric Astoul. Having picked up a piece by the French ceramist at a marketplace in Paris, the gallerist was inspired to track down the source. This led him on a journey, and eventually to the doorstep of Astoul and his wife Elisabeth in La Borne, France. While extensive traveling in Africa and Japan inform his work, Astoul’s tale begins and ends with this tiny French region, which is known for its sandstone and wood-fired ceramics. Drawing upon these traditional techniques, Astoul’s etched stoneware vases and sculptures celebrate tactility in a way that feels intuitively architectural. The legibility of Astoul’s handiwork makes each piece unmistakably one of a kind. Deliciously worked, his rich textures provide an eye-catching contrast for Bareff and Pasquer, whose work looks decidedly more restrained. 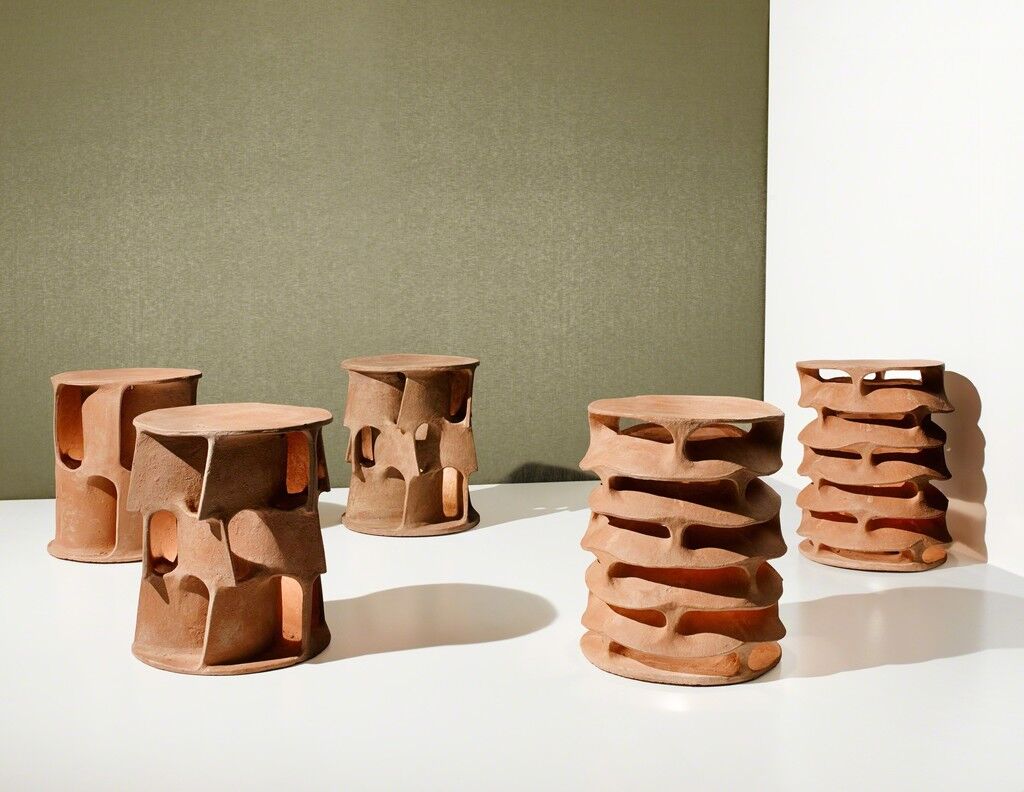 Installation view of works by Guy Bareff in “Out of the Fire,” Maison Gerard, New York. Courtesy Maison Gerard and the artist 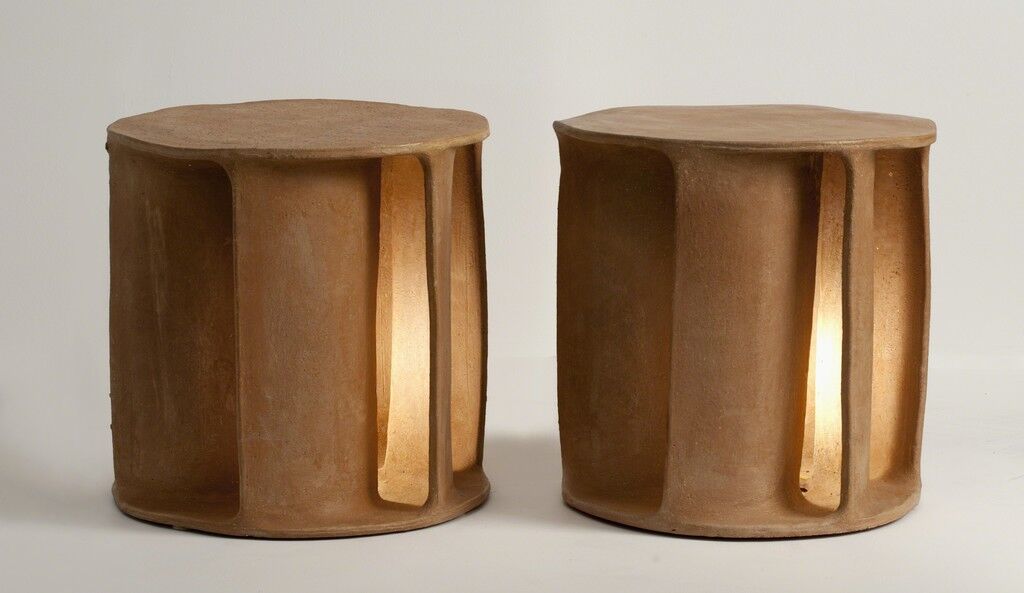 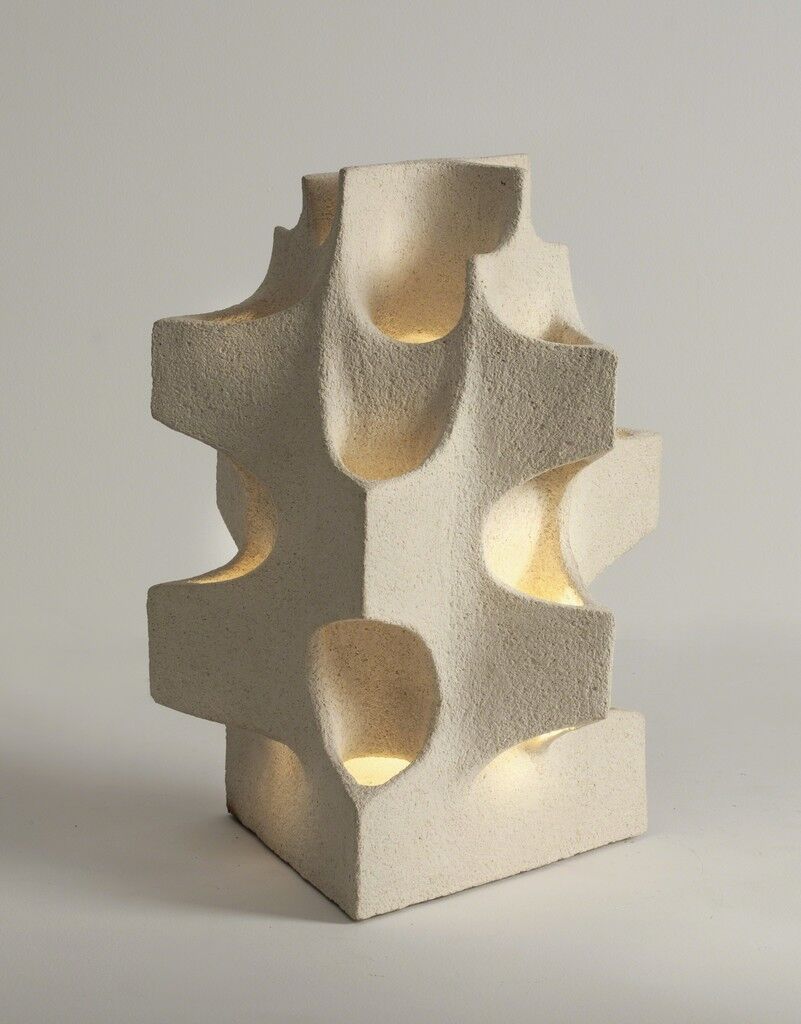 Guy Bareff
Illuminated Sculpture, 2014
Maison Gerard
Like Astoul and Pasquer, Bareff takes from his past. Growing up in his father’s ceramic studio, Bareff set himself apart from his contemporaries by embracing the beauty of clay in its natural state. Devoid of glazes, his whimsical sculptures from the 1970s rely on his innate gift for creating organic shapes. Having only recently returned to the medium, after more than a decade of writing and painting, Bareff’s most recent work picks up on where he left off. Like the early work, his new series of “Illuminated Sculptures” call to mind molecular structures as much as they do the playful primitivism of architect Antti Lovag’s Palais Bulles for Pierre Cardin. Contextualized by Astoul’s scratched surfaces and Pasquer’s polished meteorites, Bareff is cast as the inventive formalist of the group. It’s the role of a lifetime. 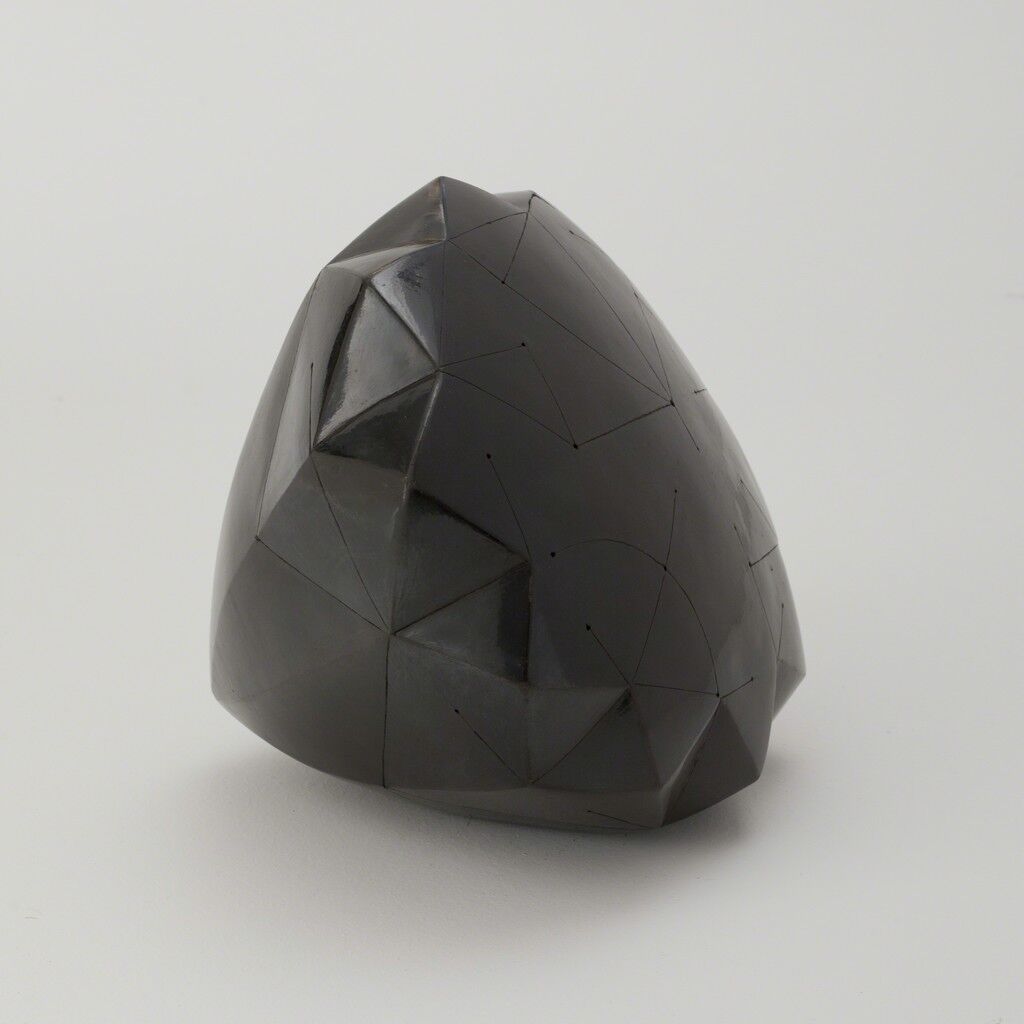 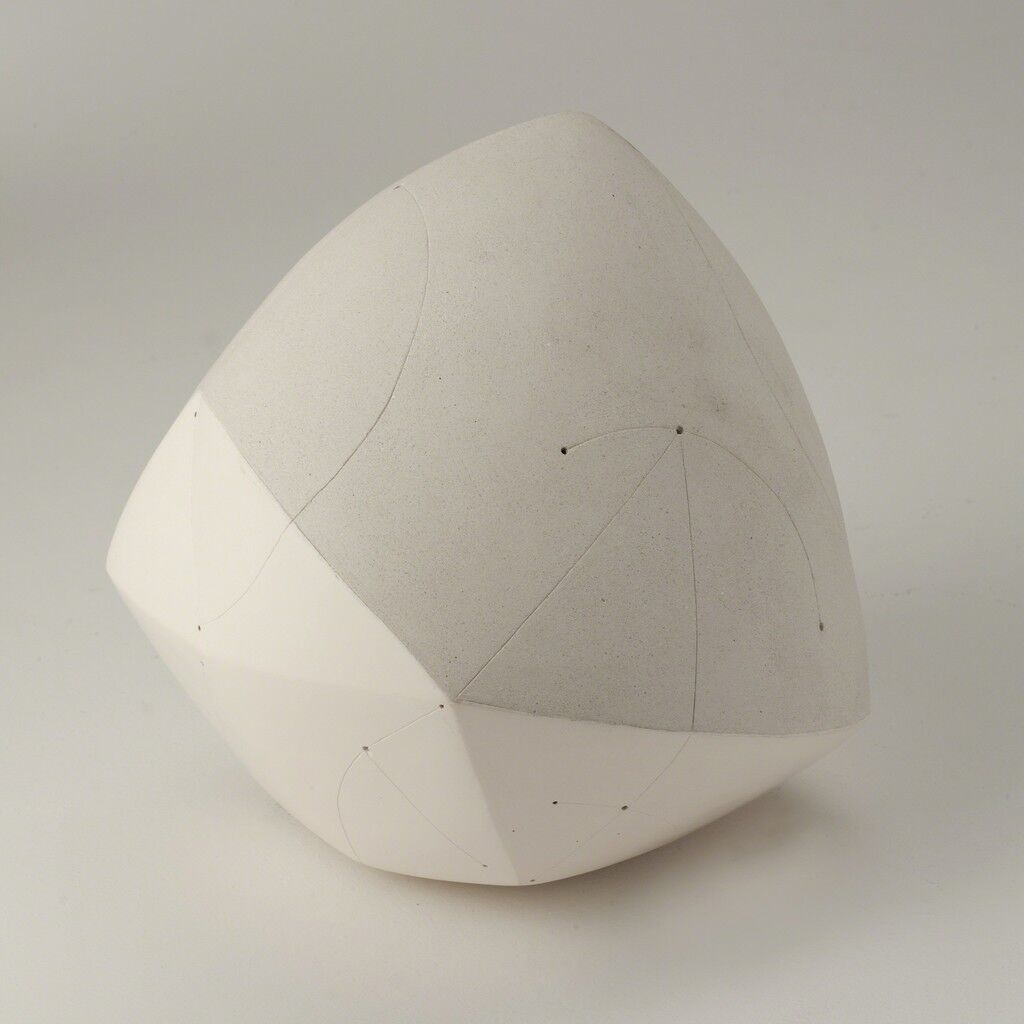 Nadia Pasquer
Polyèdre blanc, 2014
Maison Gerard
Pasquer is the final piece of the puzzle. Impossible to overshadow, Pasquer is the dreamy foil to her peers’ physicality. Like Astoul a native of La Borne, Pasquer frees herself of the regional pedagogy by transforming the earthy surface of the traditional stoneware smooth with either smoke or slip. Pasquer decorates her shiny, irregular stones; unlike Astoul’s etchings, Pasquer’s marks are almost figurative. Her tiny incisions form constellations across the sleek surfaces. Celestial rather than functional, Pasquer’s work acts as a vehicle for the artist’s lofty contemplations. Take for example one of her “Polyhèdres”—her jewel-like interpretations of the five Platonic solids. While her introduction to Drut by Pierre-Marie Giraud was serendipitous, Pasquer’s effortlessness is not. Her process relies upon her mastery and willingness to experiment just like Astoul and Bareff.
As a trilogy, Astoul, Bareff, and Pasquer complement one another, their stories intermingling; the show reads like an epic told in three parts with each individual chapter revealing yet another instance of ingenuity. Transcending the boundaries between art and craft, the display makes a compelling argument for why they all deserve a place in the contemporary canon.
Kat Herriman
“Out of the Fire” is on view at Maison Gerard, New York, June 10–July 8, 2015.
Follow Maison Gerard on Artsy.
Related Stories