Street Art Has Mainstream Influence, but Does It Have Art-World Credibility?

Isaac Kaplan
Jun 21, 2016 5:15pm
It’s not often that a van comes up at a fine art auction. But that’s exactly what will happen when, in a few days, a vehicle spraypainted by street artist
Banksy
will appear at Bonhams in London’s Mayfair. Asking price? Somewhere between £200,000 to £300,000. Even as he remains anonymous, Banksy is something of a household name, galvanizing the attention of diverse audiences and appearing in museums across the globe—from MOCA in Los Angeles, to the Bristol Museum and Art Gallery in England, to the Palazzo Cipolla in Italy. But is Banksy’s long march from the street to the museum to the auction block indicative of an institutional acceptance of street art? 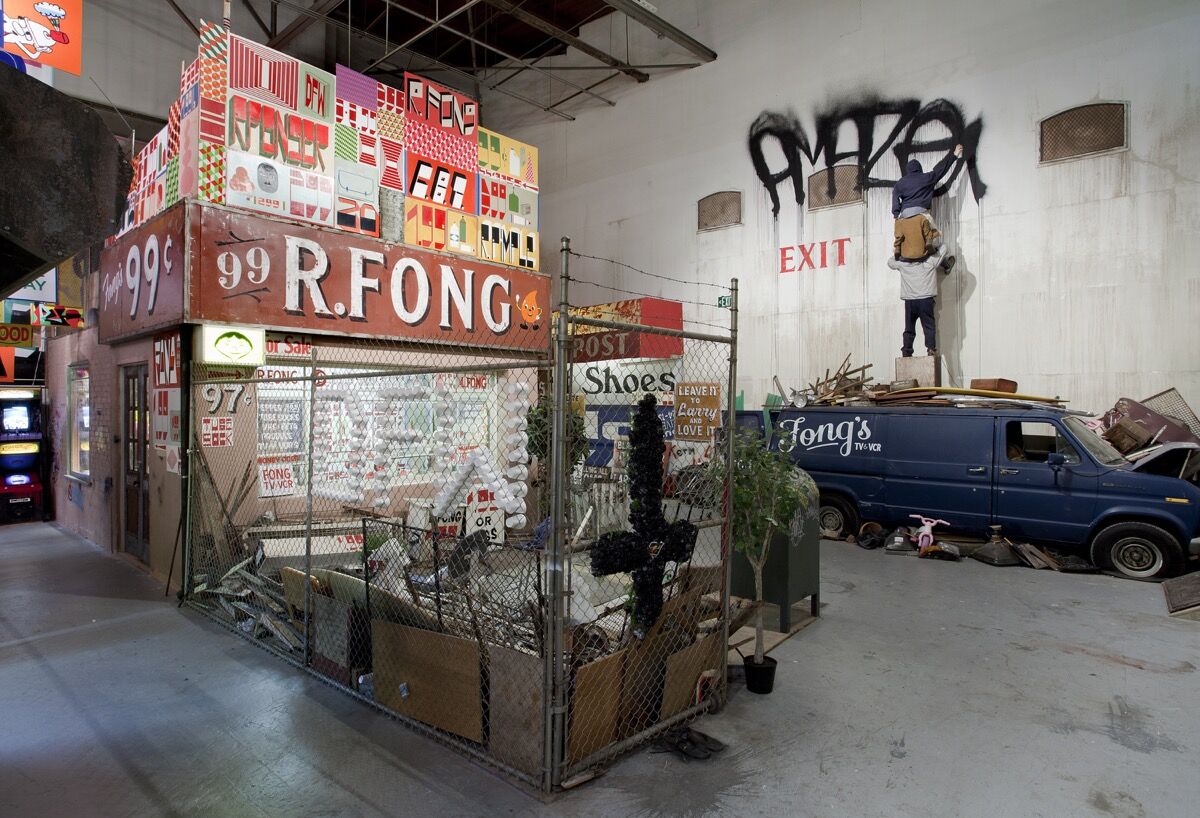 Installation view of “Art in the Streets” at MOCA, Los Angeles (2011). Photo courtesy of the museum.

“I think work has definitely moved inside, it’s been moving inside for years,” Roger Gastman, curator and founder of R. Rock Enterprises, told me. Though he dates the start of the process as far back as the early 1970s, he says that in “the last three to five years, especially, the landscape has completely altered.” One need only look at “Art in the Streets,” a 2011 MOCA exhibition organized by Jeffrey Deitch, Gastman, and Aaron Rose, as both indicative of the successes bringing street art into museums and the challenges that still remain. A major survey of street art, the show looked across continents and decades to bring together 50 street and graffiti artists like
Barry McGee
, Chaz Bojorquez, and
TAKI 183
.
The crowds that flocked to MOCA to see the show were a similarly broad group according to Deitch—from top collectors and patrons to a diverse range of communities that museums struggle to engage. This should perhaps be unsurprising given that the birthplace of street art is the public sphere. Street art “is for everybody, because this art addresses contemporary life,” he said. “It addresses the conditions in the street, in the cities. It speaks to people.” By some estimates, the show drew a staggering 201,352 people to the museum.
But when Deitch began to organize the exhibition, he immediately ran into an institutional knowledge gap, one that can be traced to the art world’s historical dismissal of street art. “We needed to build a curatorial team. I put the word out, I surveyed who is there in universities, museums, who has expertise in this area,” he told me. “And we could not find anybody.” Deitch looked to the commercial arena for curatorial partners and—though some critiqued the move—the exhibition clearly resonated with a large audience. A similar story can be told of Gastman’s 2013 show “Pump Me Up: D.C. Subculture of the 1980s,” which looked at the gritty Washington, D.C., of the decade and featured some graffiti art. Though hosted by a somewhat hesitant Corcoran Gallery of Art, it went on to prove a blockbuster in terms of visitor numbers according to Gastman. 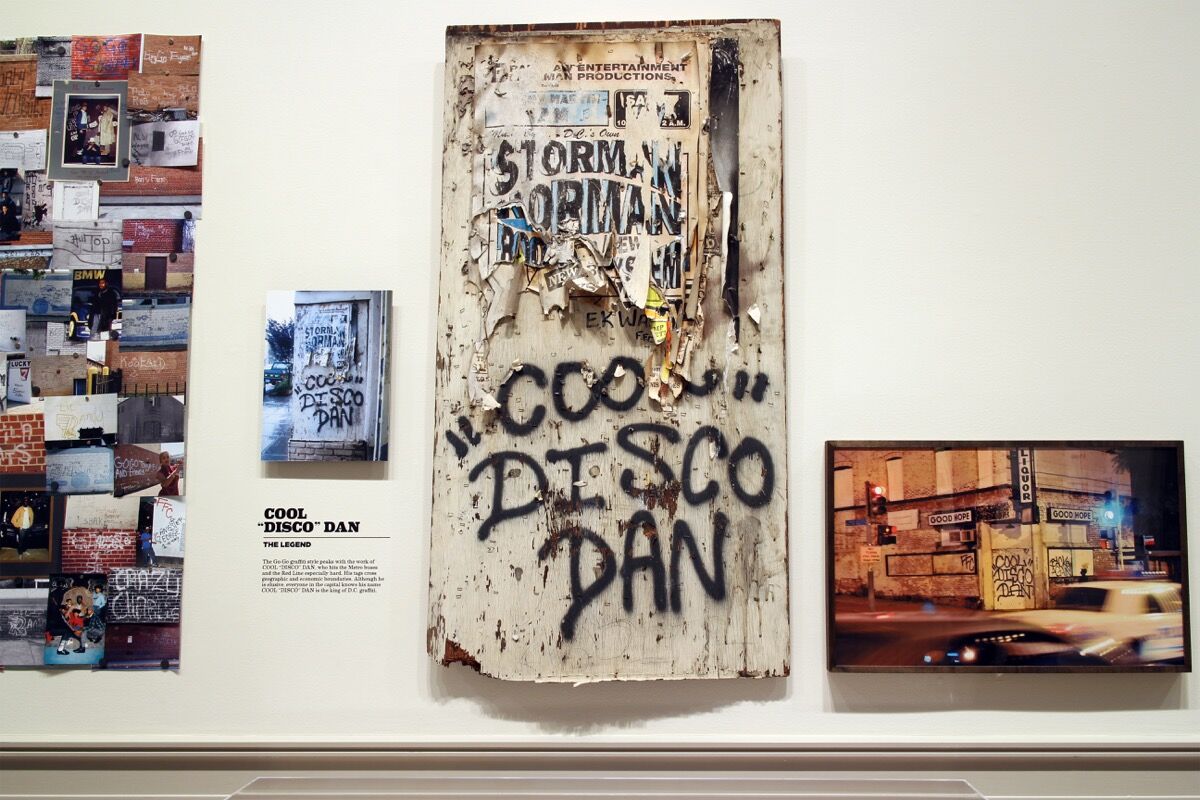 Installation view of “Pump Me Up: D.C. Subculture of the 1980s” at the Corcoran Gallery of Art. Photo courtesy of the institution.

Advertisement
G. James Daichendt—a professor at Point Loma Nazarene University who specializes in street art—notes that within academia, street art is “a field that’s mainly on the fringes.” Still, he adds, museum shows like “Art in the Streets” are helping to change that. “Art History just stopped using slides so it’s a pretty slow field,” he says. “There are a handful of people talking about [street art]. I think that’s pretty darn good considering all the specialities you can have.” And as more students come across street art in Art History 101 textbooks, the acceptance of the style in future generations is likely to grow.
Yet according to those I spoke with, there remains institutional reticence towards a style that some malign as graffitti. Graffitti, street art, and art by street artists appearing inside museums are related but have stylistic and conceptual differences. There are exceptions, especially at smaller museums like ICA Boston, MCA San Diego, Museum of the City of New York.
And the bias against “graffiti” stretches far outside the art world as well. When “Art in the Street” was slated to travel to the Brooklyn Museum, New York City councilman Peter F. Vallone, Jr., following a polemical New York Daily News editorial, penned a letter to the museum itself. “Let me be very clear,” he wrote to then-Brooklyn Museum director Arnold L. Lehman, “taxpayer money should NOT be used to encourage the destruction of our taxpayers’ property.” The museum subsequently canceled the show, citing funding constraints rather than political pressure. Perhaps a sign of how much can change in a few short years, in 2014 the Brooklyn Museum hosted a site-specific installation by the borough’s very own
Swoon
.

Installation views of “Art in the Streets” at MOCA, Los Angeles (2011). Photos courtesy of the museum.

A reluctance to engage with street art beyond its most seminal figures and a dismissal of important graffiti movements means art history isn’t giving these artworks attention commensurate with their influence.
Basquiat
has belatedly entered museums, but the same cannot be said about his close friend and artist
Rammellzee
or the graffiti style known as “Wildstyle,” which can be found across country, on highways, overpasses, railroads. In terms of influence, “it parallels hip hop, and music, and breakdancing—it’s an amazing cultural innovation that comes out of New York,” Deitch told me. “So it matches, if not surpasses, the influence of any other art that came out of New York City. In my point of view, it very much merits study, serious collecting.”
Indeed, in some ways the commercial side of street art is “helping make people take notice,” says Gastman. It has led a number of major auction houses (Christie’s and Sotheby’s among them) to devote sales to the genre. Megan Mulrooney—head of private sales at Julien’s Auctions—notes that street art has indeed found widening reception by those looking to buy. “The evidence is in the prices,” she says, noting that recent years have witnessed the emergence of “blue chip” street artists like Banksy,
Kaws
, and
Invader
, all who attain prices in excess of $100,000. Over the years, those snapping up street art have come to resemble the “traditional” art collector. “The early adopters of street art were a different kind of clientele,” she says. Friends and longtime fans are mixing and competing with “people who owned an Impressionist picture and are also looking for street art.”
There is no doubt that more work needs to be done, especially when it comes to education and exploring lesser-known women street artists. Yet given that street art is powerfully able to engage both frequent denizens of the art world and those who feel alienated by such spaces, it will continue to have a devoted following. One day street art may be seen not as some subset or suburb of the fine art world, but as a crucial and meaningful part of its whole.
Isaac Kaplan is an Associate Editor at Artsy.
Related Stories