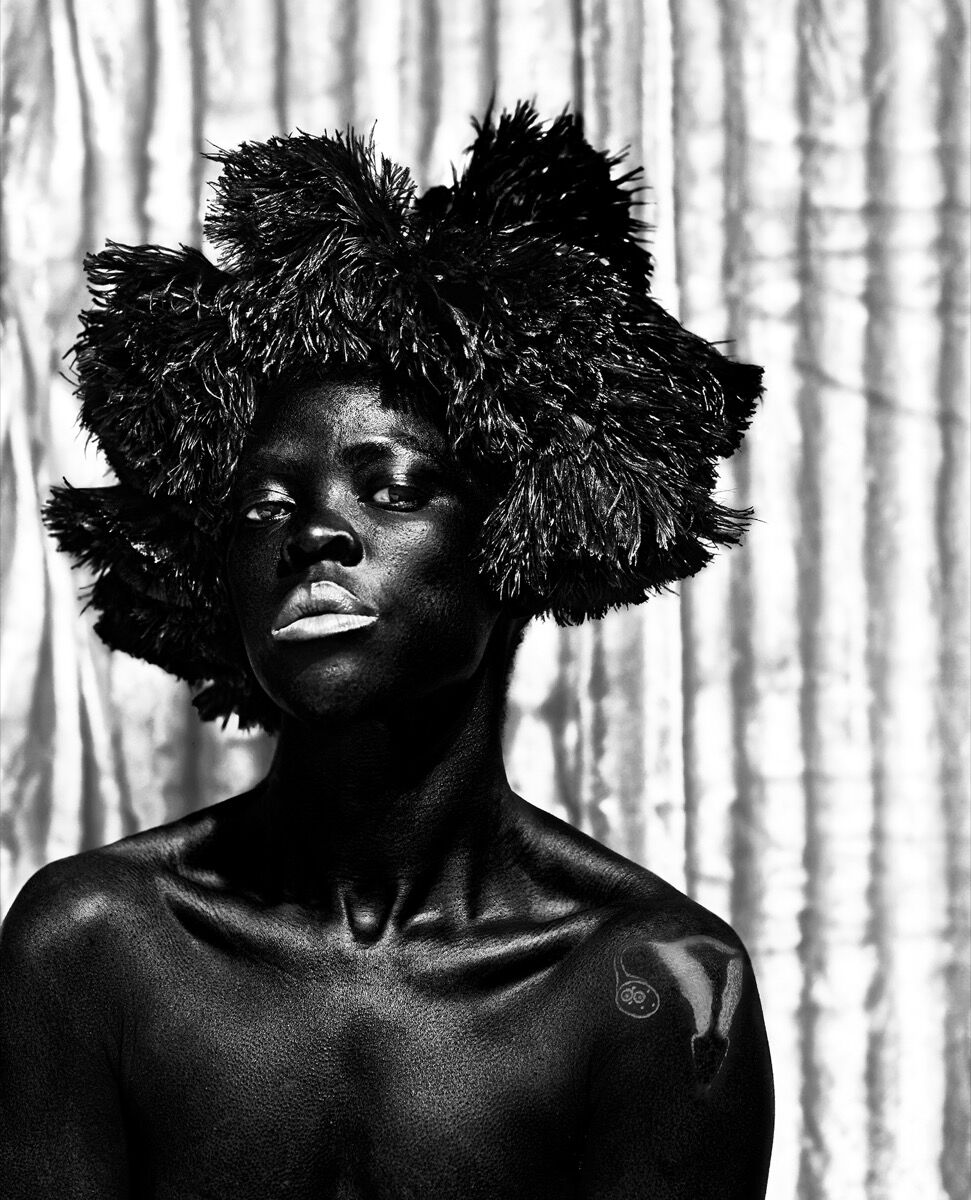 Striking contrast defines the self-portraiture of
Zanele Muholi
, the photographer who, in recent years, has become an art world phenom. The unsmiling South African artist renders herself in searing, digitally amplified monochrome against stark backgrounds—a minimally wrought bedroom or beach, at most. Costumed in a tiara or an elaborate hair adornment, and wrapped with tires or rope around her body and head, Muholi creates a series of diverse characters that allude to the multiplicity of self.
A new monograph by Aperture, Zanele Muholi: Somnyama Ngonyama, Hail the Dark Lioness, explores the tension between artist and persona, reality and fiction. If the areas of stark, saturated hues first capture the viewer’s attention, the eye quickly moves to the regions in between—where light settles on, and ultimately illuminates, Muholi’s skin. The self-portraits ask viewers to reconsider not just the individual, but a larger, more complicated (and often damning) history of viewing black bodies. 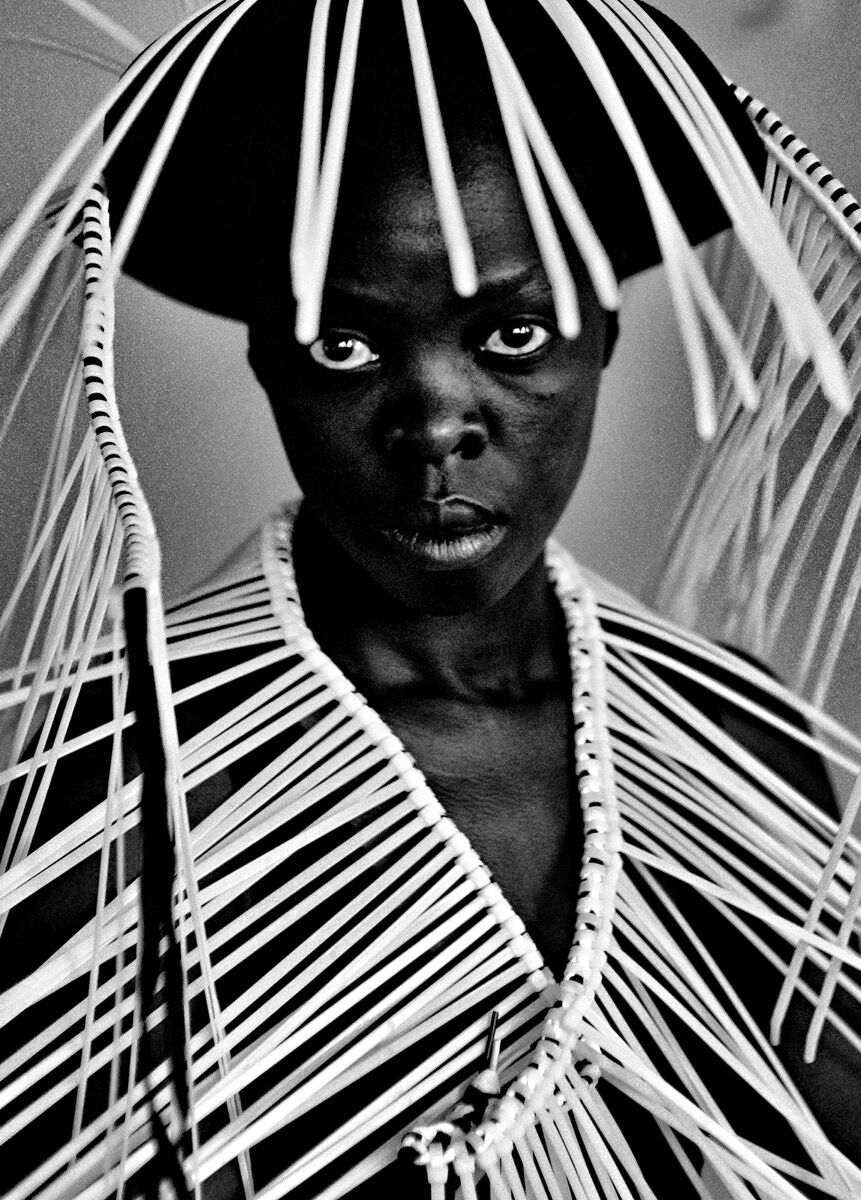 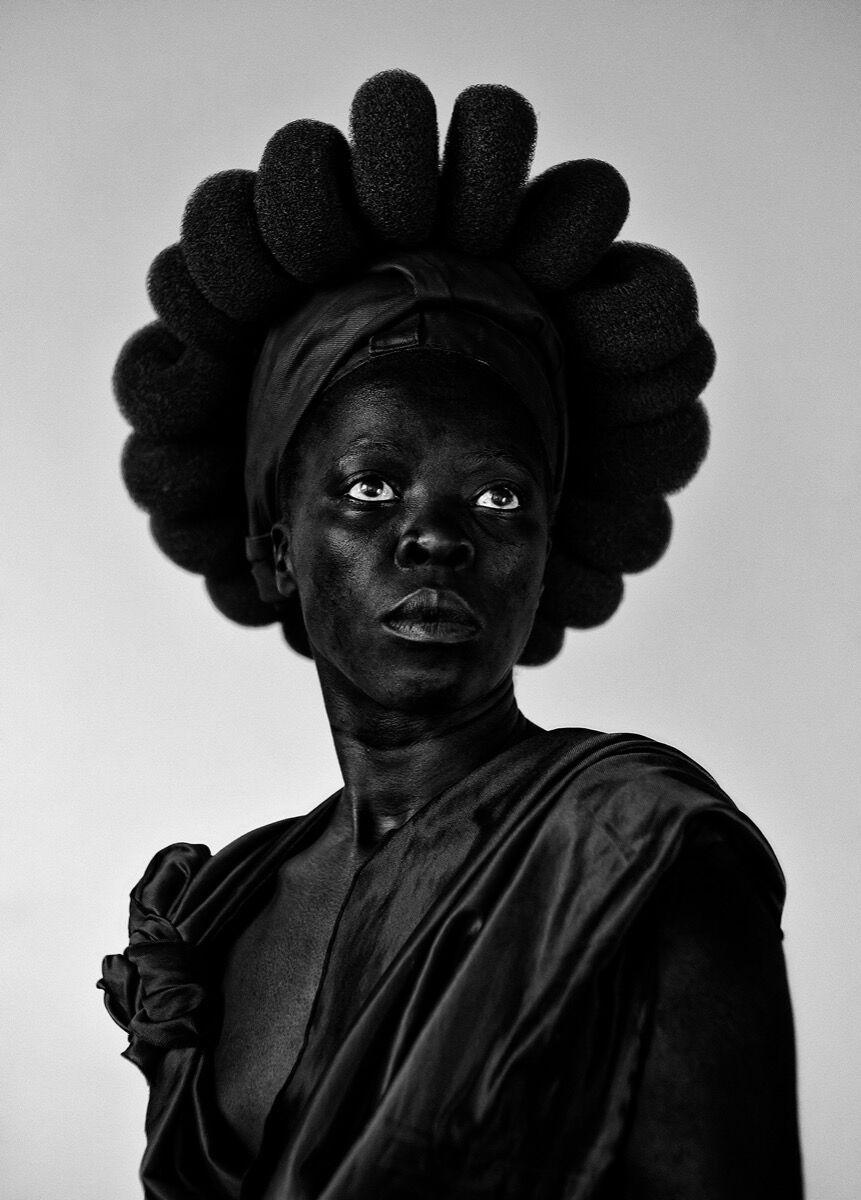 Born in 1972 in the Umlazi township on the east coast of South Africa, Muholi rose to prominence with her 2006 “Faces and Phases” series, in which she began photographing the country’s LGBTQIA+ community. She called herself a “visual activist,” using her lens for empowerment. The project offered visibility and dignity for its subjects at a time when widespread homophobic violence threatened their lives. That year, Muholi exhibited in Austria, the Netherlands, South Africa, and Spain; an international audience responded to her hyper-local aesthetic.
In 2015, Muholi mounted a major exhibition at the Brooklyn Museum entitled “Zanele Muholi: Isibonelo/Evidence” to a wider American audience. The show—her most comprehensive presentation to date, according to the institution—featured 87 works, many from “Faces and Phases,” produced from 2007 to 2014.
Muholi began to turn the camera inward during the latter years of that body of work, exploring her own sense of self. The new Aperture volume features an early self-portrait from 2012, though the series really took off in 2014, when Muholi decided to create 365 portraits of herself (a project that has not yet been completed), continuing that practice during a 2015 residency at Light Work in Syracuse, New York. Each day of her residency, she took one self-portrait. 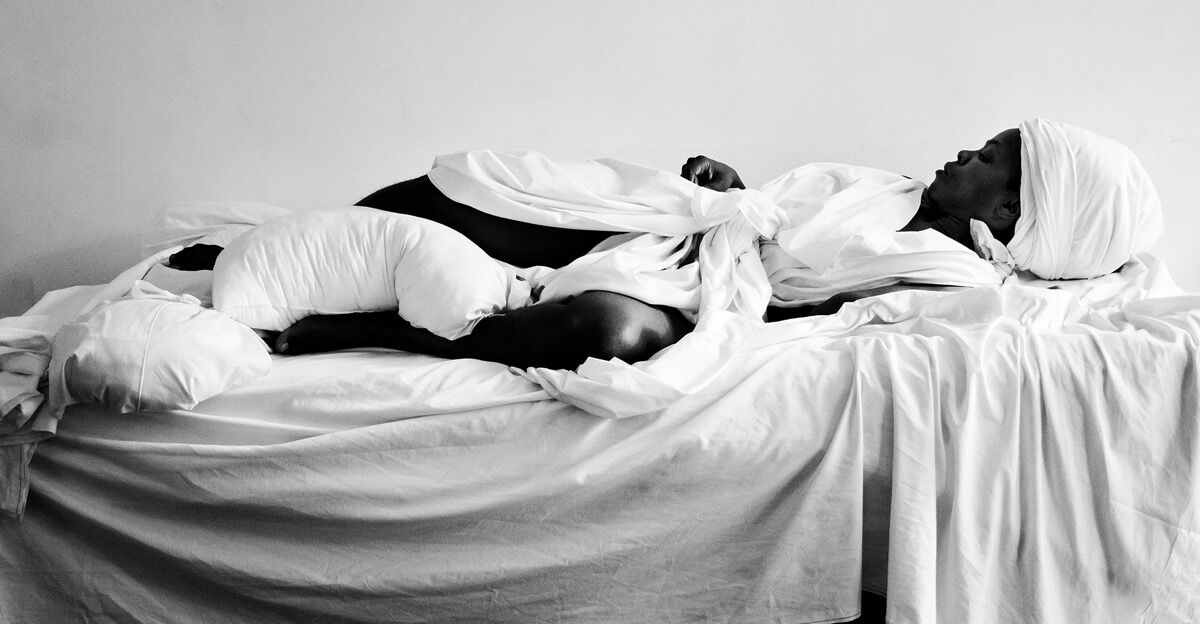 Advertisement
Curator Sophie Hackett has compared Muholi’s aesthetic in her self-portraits to that of
Robert Mapplethorpe
(in particular, his black-and-white photographs of bodybuilder Lisa Lyon) and mid-century fashion photographer
Louise Dahl-Wolfe
, suggesting multivalence within Muholi’s deceptively simple photographs.
“Muholi has really found this amazing way of looking at herself,” said Lesley A. Martin, publisher at the Aperture Foundation. “[She’s] able to unpack her personal history, sociological history, cultural history. Muholi really defines herself as a visual activist.” Placing herself in front of the lens, Muholi evokes layers of art and political history in South Africa, New York, and beyond. 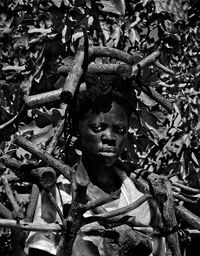 Zanele Muholi
View Slideshow
4 Images
For example, ZaKi I, Kyoto (2017) features Muholi kneeling in a doorway, a flower in her hair, wearing a loosely wrapped, bold-patterned dress. The floral motif on the door embellishments and the botanical wallpaper behind her enhance the sense that she’s riffing on an
Orientalist
perspective. Despite her apparently submissive position on the ground, the viewer is at eye level with her. Muholi’s body blocks entry to the room beyond, making her a powerful gatekeeper.
Like all of Muholi’s self-portraits, ZaKi, Kyoto is named after the site where took the photograph—the artist responds to her specific environment in each frame. Martin mentions that for MaID in Harlem, African Market 116th Street New York (2015), Muholi purchased a cowrie shell, a beaded necklace, and a flyswatter in Harlem with which to adorn herself. “All of those materials were taken from the market and talk about the African diaspora of these items,” Martin said. “That image could almost be an ethnographic portrait from the 1900s, but in fact it’s Muholi posing with these items that she’s collected very close to where they were staying at that moment.” Past and present merge in the simple composition. 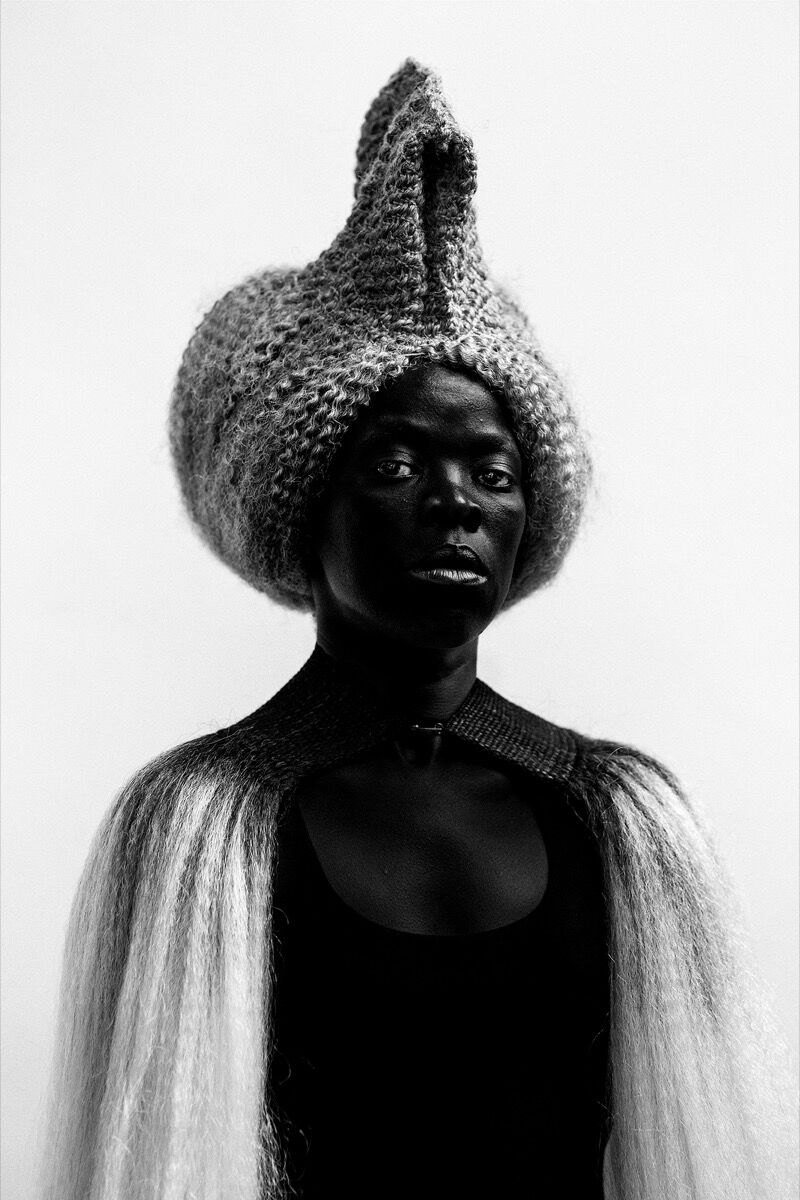 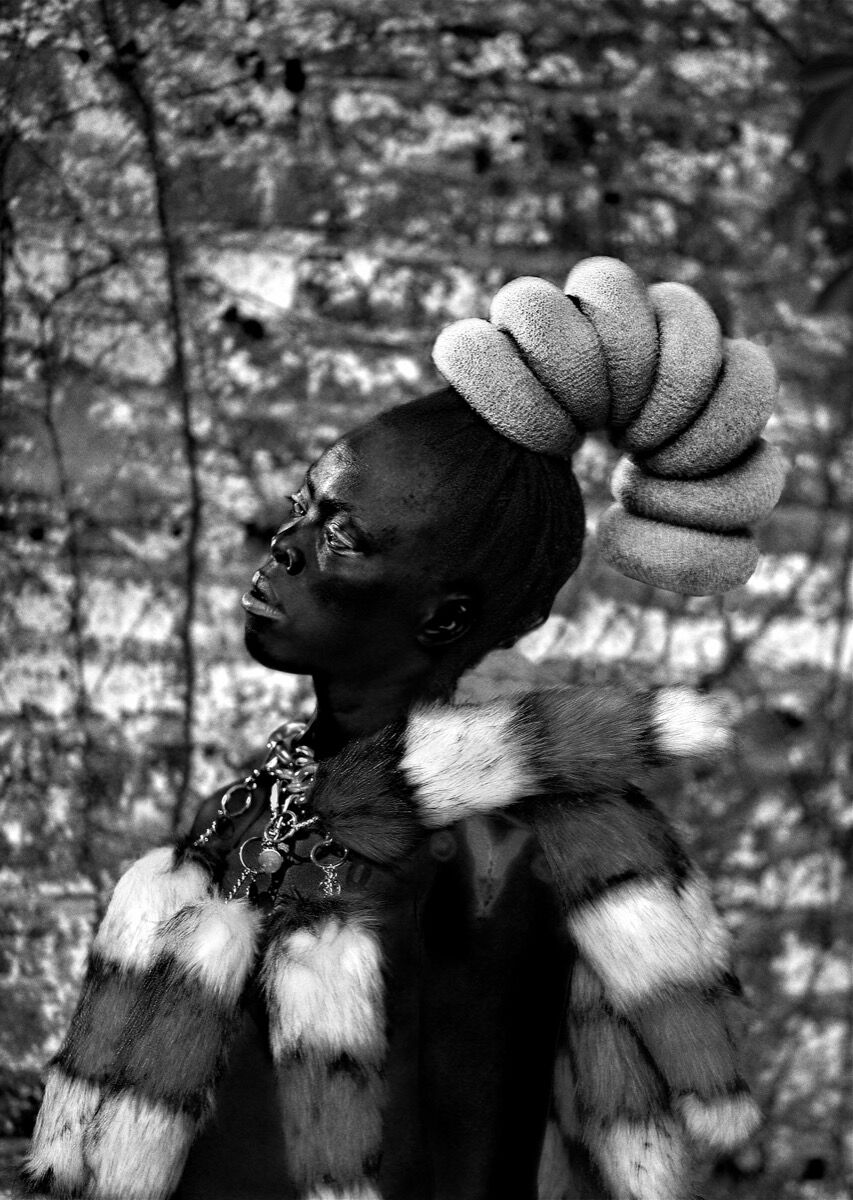 Muholi’s titles, which reference places from North Carolina to Berlin, Paris, and Sweden, suggest her itinerant lifestyle and ability to shape-shift as she enters new places. Reading the titles, a viewer can construct the photographer’s journey—both literal and metaphorical—towards self-discovery.
“Bester” is a recurring character throughout the photographs taken in Mayotte (an island between Madagascar and Mozambique), who wears clothespins in her hair or a floral-patterned scarf around her head. Muholi took the name from her mother, who served a white South African family as a domestic worker for over four decades. Muholi reimagines Bester as a self-possessed, formidable presence.
While Muholi’s images reference place, they often seem removed from time: Her frames feature few objects that would connect them to the 21st century. Yet current events—traumas, in particular—motivate much of her imagery. In a conversation transcribed in the Aperture volume with Renée Mussai, curator and head of archive at Autograph ABP in London, Muholi spoke about taking a portrait in response to Sandra Bland’s 2015 murder in Texas.
Muholi connected the case to violence in South Africa. “A person had been found murdered in a cell and nobody wanted to take responsibility for what happened to this young black woman,” she said. “I regarded Sandra’s killing as a hate crime against the black body at the hands of someone.” In the two images that comprise MaID I (2015), Muholi wears white gloves that she first wraps around her neck as if to choke herself, then raised as if for a fight. Through the dual photographs, Muholi condemns racist brutality worldwide, while reclaiming her own image and ability to retaliate.
Muholi’s self-portraits allow for endless self-invention in a world that so often attempts to limit or punish expressions of race and sexual identity. At its core, it’s a practice of introspection. ‘‘This is why the self-­portraits are so major to me,’’ she told Jenna Wortham for a New York Times profile in 2015. ‘‘We get caught up in other people’s worlds, and you never ask yourself how you became.’’
Alina Cohen
Related Stories

How Black Artists, Dealers, and Collectors Are Boosting the Careers of Their Younger Peers

When Sipho Gongxeka’s Sister Came Out, He Used His Camera to Reframe Queer Identity in His Township 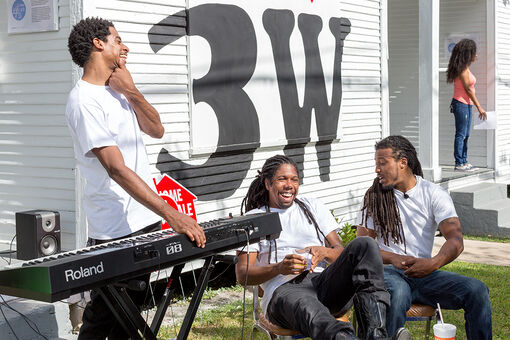 How Black Artists, Dealers, and Collectors Are Boosting the Careers of Their Younger Peers
Antwaun Sargent
Dec 14, 2017 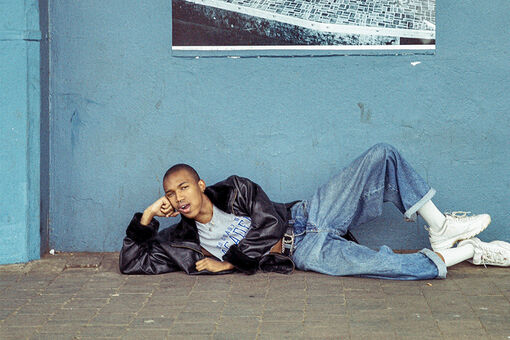 When Sipho Gongxeka’s Sister Came Out, He Used His Camera to Reframe Queer Identity in His Township
Tom Seymour
Aug 13, 2018 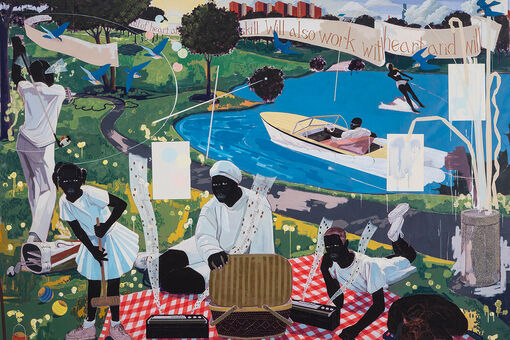