SUNDAY Art Fair Benefits from a Risk-Taking Roster of Galleries 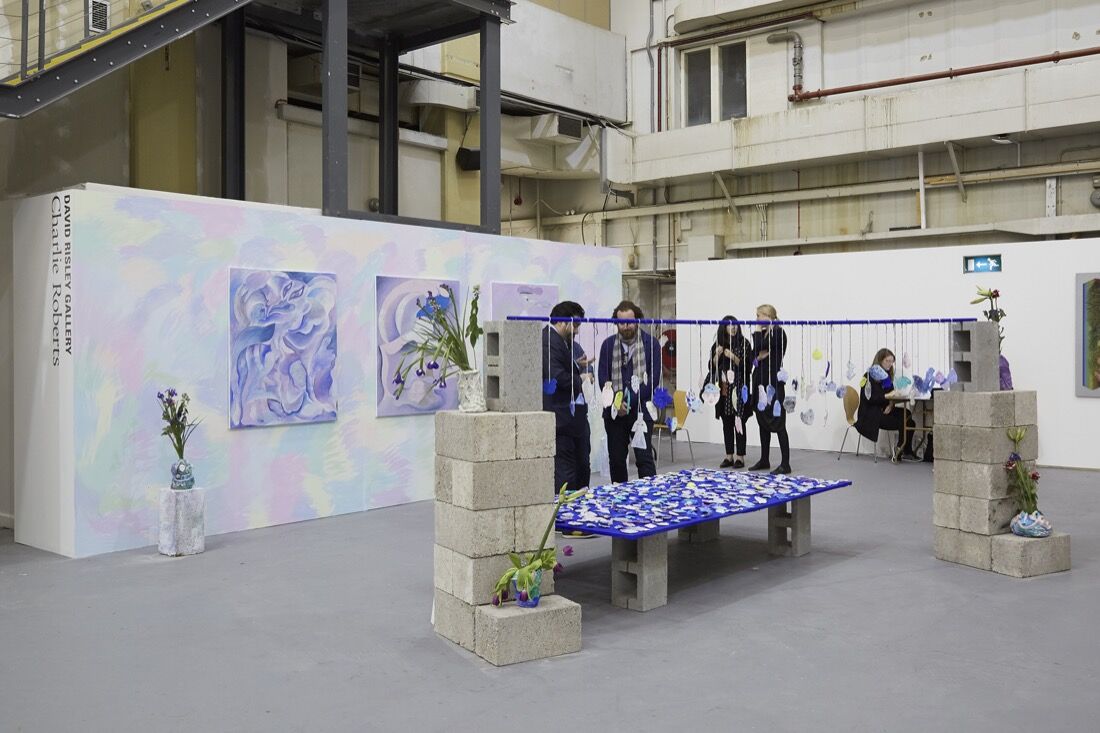 In trying to find London’s SUNDAY Art Fair, I joined a long line leading to a large, institutional-type building. Assuming that the youth and general scruffiness of the clientele reflected the fair’s reputation as the shabbier, cooler younger cousin to pinstriped Frieze, I waited patiently in line to register for my press pass. Only when I got to the front of the queue did it dawn on me that I was about to sign up as a student at the University of Westminster. Redirected by a kindly security guard towards a metal gate 30 yards down the road, I came across a forlorn-looking but bright-sounding young woman alone at a small desk, who sent me down a set of clattering metal stairs into the building’s bowels, scattered with the detritus of industry: discarded building materials, scaffolds, strips of corrugated iron. Paper signs taped to the walls directed me to a large, atrium-like space on two levels, from the upper of which I walked down into the open plan fair. 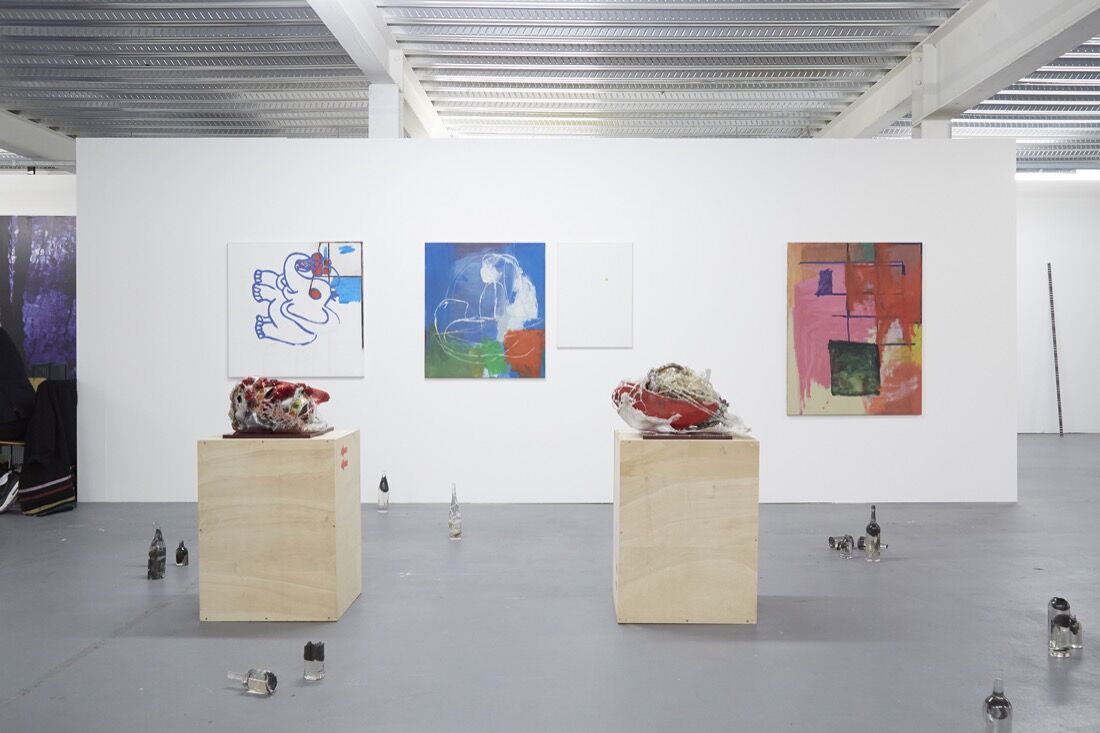 The layout of the fair, which welcomes 25 galleries in its sixth edition, is distinguished by the relative scarcity of dividing walls, meaning that it can sometimes be difficult to tell where one display ends and another begins. The design lends SUNDAY a pleasingly democratic sense of space and openness, more inviting than the variously sized but always claustrophobic booths into which galleries are elsewhere squeezed. It does mean that one tends to be drawn, initially, to the most visually striking work in each of the three interconnected rooms, but overall I found this bleed between presentations to be no less distracting than the numbing overstimulation that art fairs can sometimes induce. 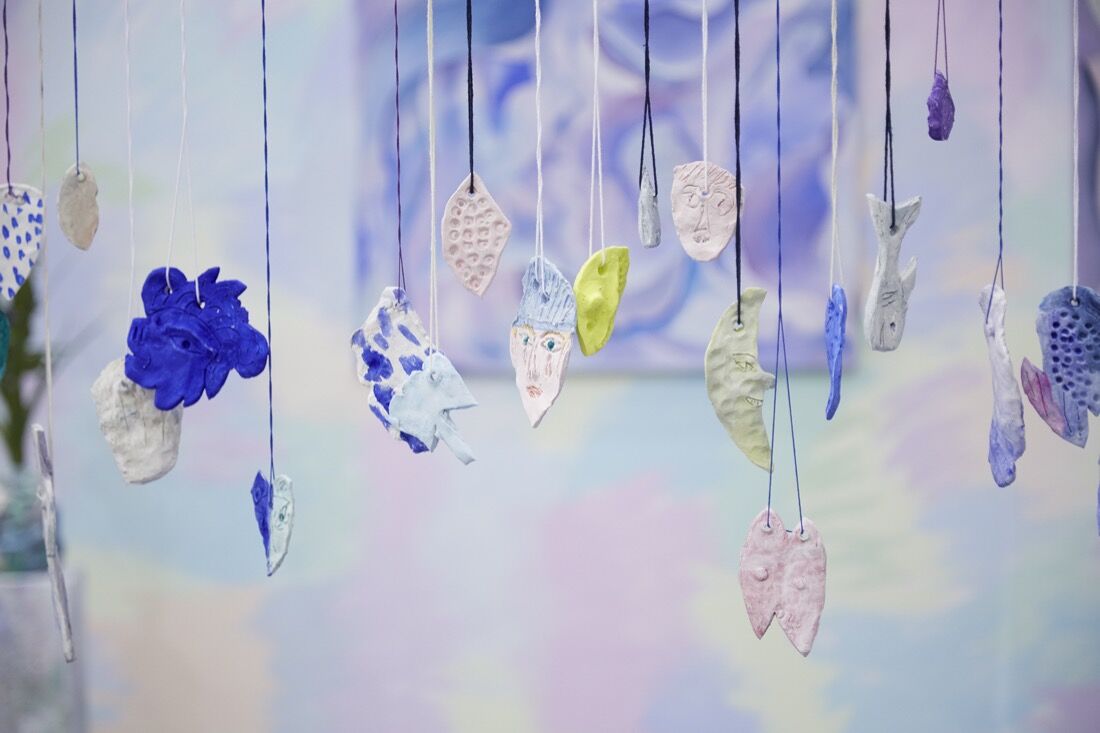 Advertisement
My eye was first caught by the borderline garish pastel swathes decorating the single wall devoted to Copenhagen’s David Risley Gallery, on which hang three dreamlike paintings by Oslo-based, American-born artist Charlie Roberts. These are accompanied by a motley array of pocket-sized ceramic sculptures scattered across a long table and hung by string from a line stretched above. Spliffs, faces, birds, and eyes are among the subjects of these contemporary fetish objects, individually priced so that they might be affordable even to the aforementioned students. The genial kitsch of the presentation—which also includes small works on paper and scattered, ramshackle vases—is rather charming, and certainly preferable to the po-faced obfuscation which can sometimes be mistaken for gravitas at satellite fairs. 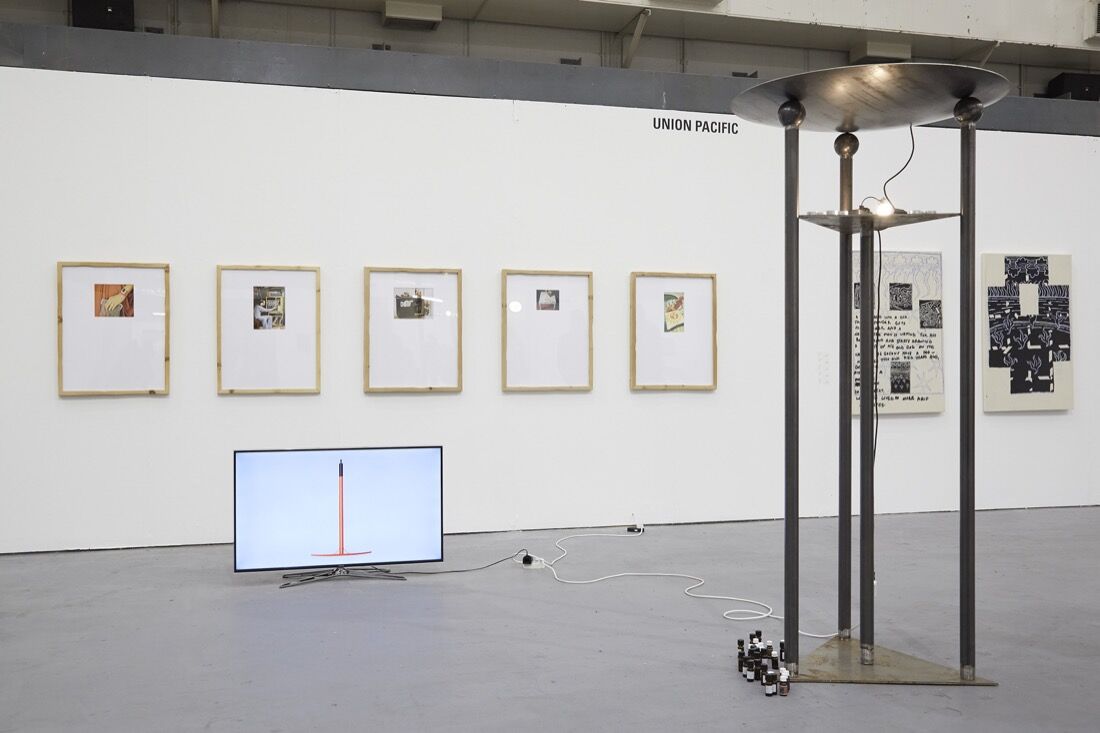 While my eyes alerted me to David Risley’s booth, my nose took me to the recently established, London-based Union Pacific gallery. From a shallow bowl atop an intimidating, tri-legged metallic sculpture wafts the strong—and rather dislocating, given the industrial setting—smell of pine oil. The Swiss-based artist responsible for the structure, Jan Kiefer, also contributes a series of elegant-seeming wall-based works—pictures appropriated from 1970s DIY magazines, surrounded by white space and framed in hand-whittled, mountain pine. The gallery’s co-founder Grace Schofield reassures me that the work is, while unquestionably retrospective, not nostalgic. The presentation takes interest in the processes of physical manufacture and is intent on engaging the senses in a way that has become a trend among certain younger artists. The long-mooted return of “the object,” perhaps. 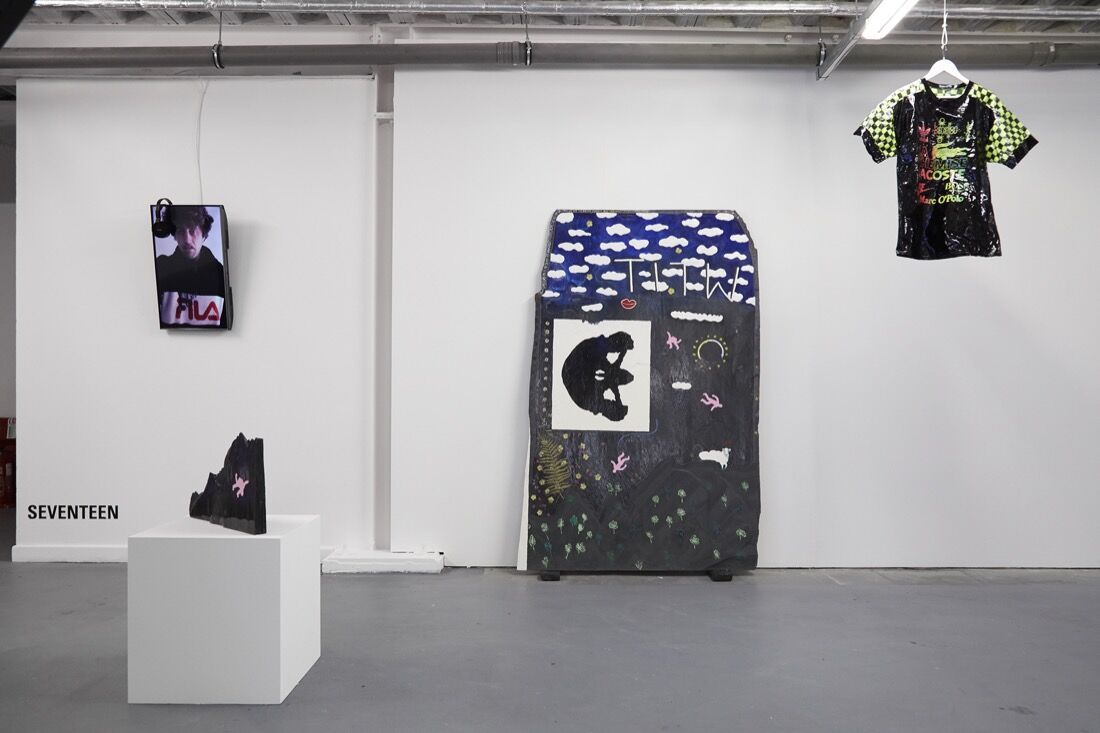 Jimmy Merris is at the vanguard of another widely discussed, even contentious tendency in new British art. The diaristic, nakedly autobiographical inclinations of his work and that of other young, white, middle-class male artists has drawn criticism for its perceived self-indulgence. Yet the work on show at Seventeen is interesting precisely because it acknowledges the absurdity of this introversion and twists it into something unquestionably strange and deeply sad. The emasculated, decentered melancholy of the 21st-century male has been expertly exploited—in the first person—by writers including Ben Lerner and Karl Ove Knausgård. Here, Merris documents a recent relocation from the once-hip London borough of Peckham to the wilderness of Wales through childlike paintings on slate and videos of fractured, jarringly edited footage of the surrounding countryside, across which words like “horse” shudder. It’s curiously touching. 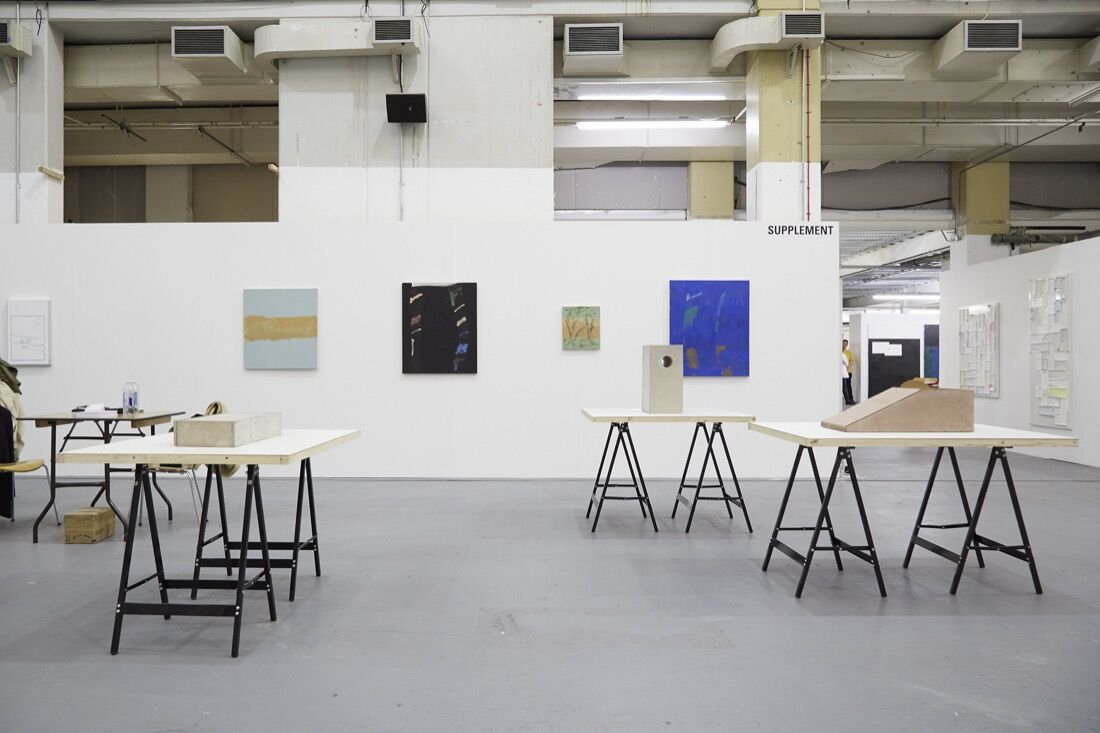 Thomas Duncan Gallery was recently described to me by a West Coast native as the best of the Los Angeles’s young galleries. Duncan’s considered, calm presentation of young Brooklyn-based painter
Zak Prekop
demonstrates a striking confidence in the capacity of the artist’s work to speak for itself, even in the dizzying mix of an art fair. To resist the temptation to show obviously flashy work, or to flourish a glitzy curatorial strategy, bodes well for the future of the gallery. The same faith in its artists is exhibited by London’s Supplement gallery, which eschews more fashionable considerations in favor of remarkably delicate small sculptures in concrete by the London-based Jack Vickridge. 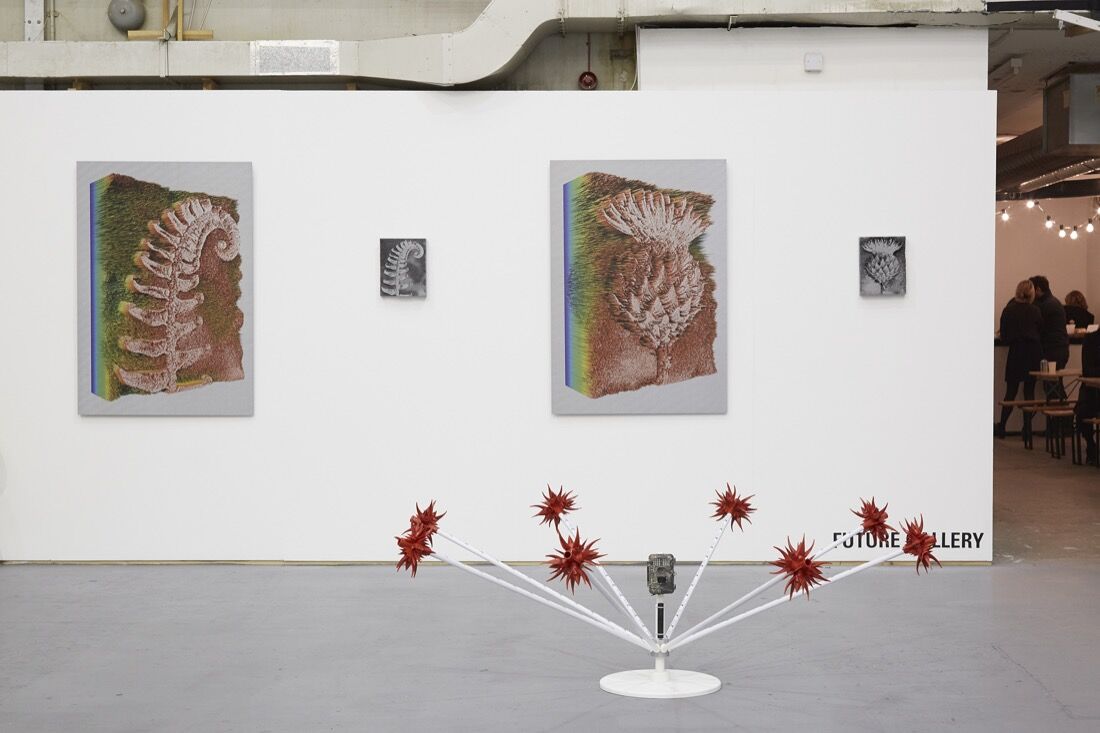 The fair has a similar feel to that of Independent and presents itself as a relatively open, casual, and experimental alternative to the Frieze behemoth. So intense are the financial pressures of participation in fairs such as Frieze—the commercial revenue from which has become an increasingly central part of the larger galleries’ financial projections—that there is little incentive to take risks. While anyone who has worked for a smaller gallery would contest that the commercial imperatives of taking part in an art fair are less pressing—indeed in existential terms, the stakes are typically higher—there is a greater reward for risk. While galleries at the big fairs increasingly look to the safe bets among their stable, their younger rivals are competing without safety, their reputations (and future commercial success) dependent exclusively on their ability to identify new talent.
Ben Eastham
Explore SUNDAY 2015 on Artsy.
Related Stories