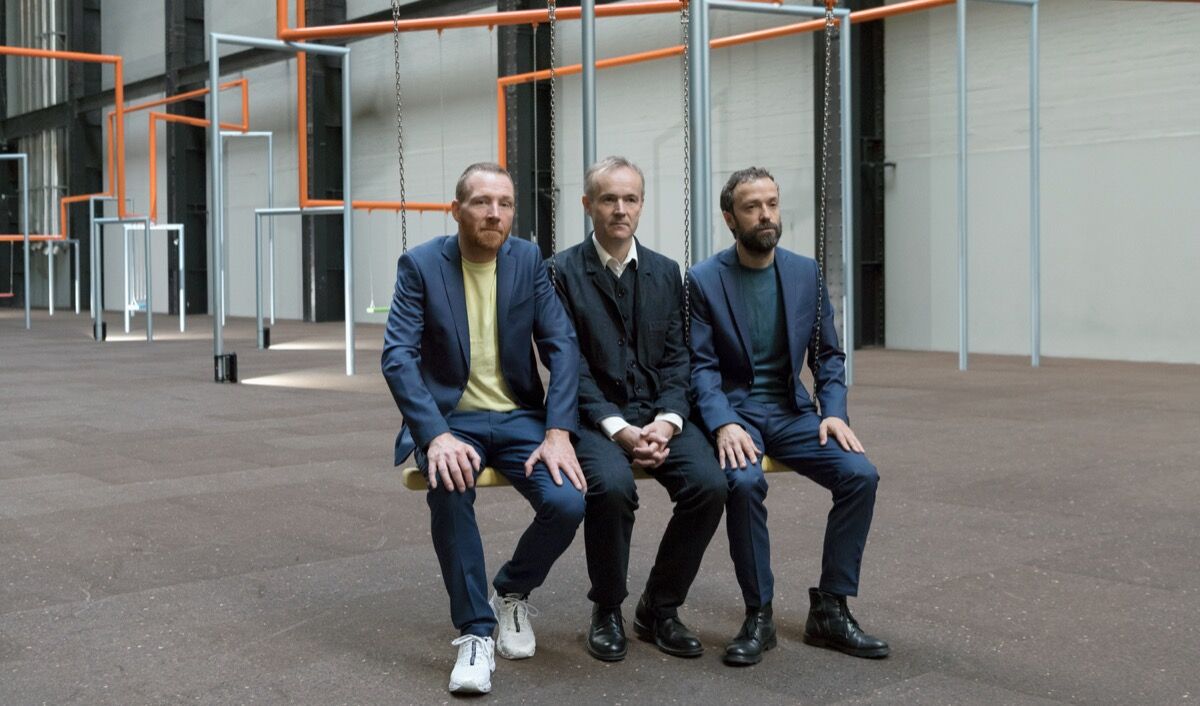 Bjørnstjerne Christiansen of the art collective
SUPERFLEX
talks a lot about “challenging power structures”—and now he’s planning to take down the system with a super bright orange playground. In almost anyone else’s mouth, such a claim would ring hollow. But over the last 24 years, the Danish trio (which also includes Jakob Fenger and Rasmus Nielsen) has addressed an array of socio-political issues in truly innovative ways. One Two Three Swing!, their contribution to the Tate Modern’s series of Turbine Hall commissions, is no exception.
SUPERFLEX have always used an art context in order to engage with the wider world. Their first major project involved designing a bubble which allowed the production of enough gas to sustain a rural family “living in the global south” (Supergas, 1996). The group took on multinational coroporations’ guaraná monopoly in Brazil with the launch of a locally run guaraná drink cooperative (Guaraná Power, 2003), and campaigned for the inclusion of Palestine in the Eurovision singing contest (in which an Israeli team has competed since 1973, (Palestinian Eurovision, 2008). In 2011’s Power Toilets, they revamped a bathroom at a downtown Manhattan restaurant to exactly resemble the executive facilities at JPMorgan Chase bank.
For the Turbine Hall, they’ve harnessed the radical potential of play in a monumental installation that takes over the cavernous atrium and spills out onto the courtyard outside the museum’s recently opened extension, designed by
Herzog & de Meuron
. 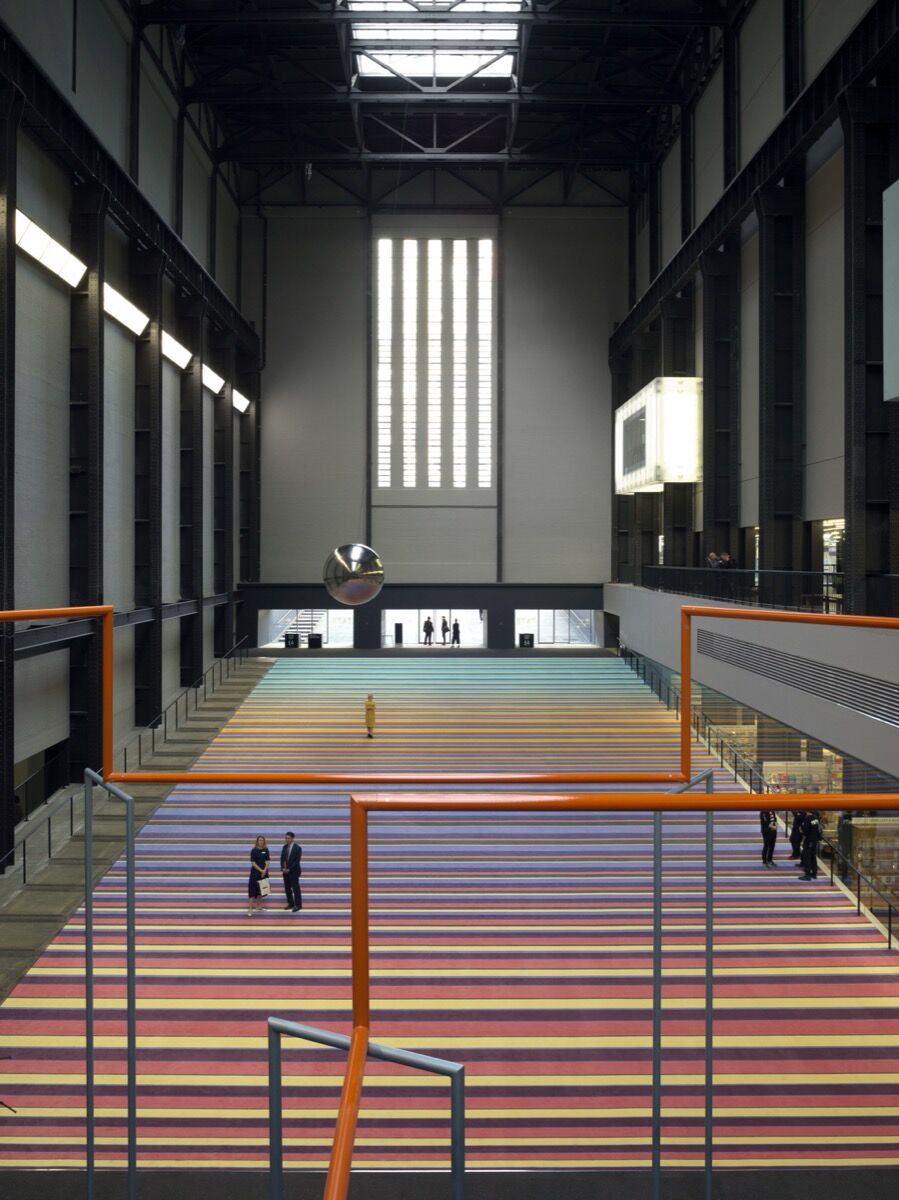 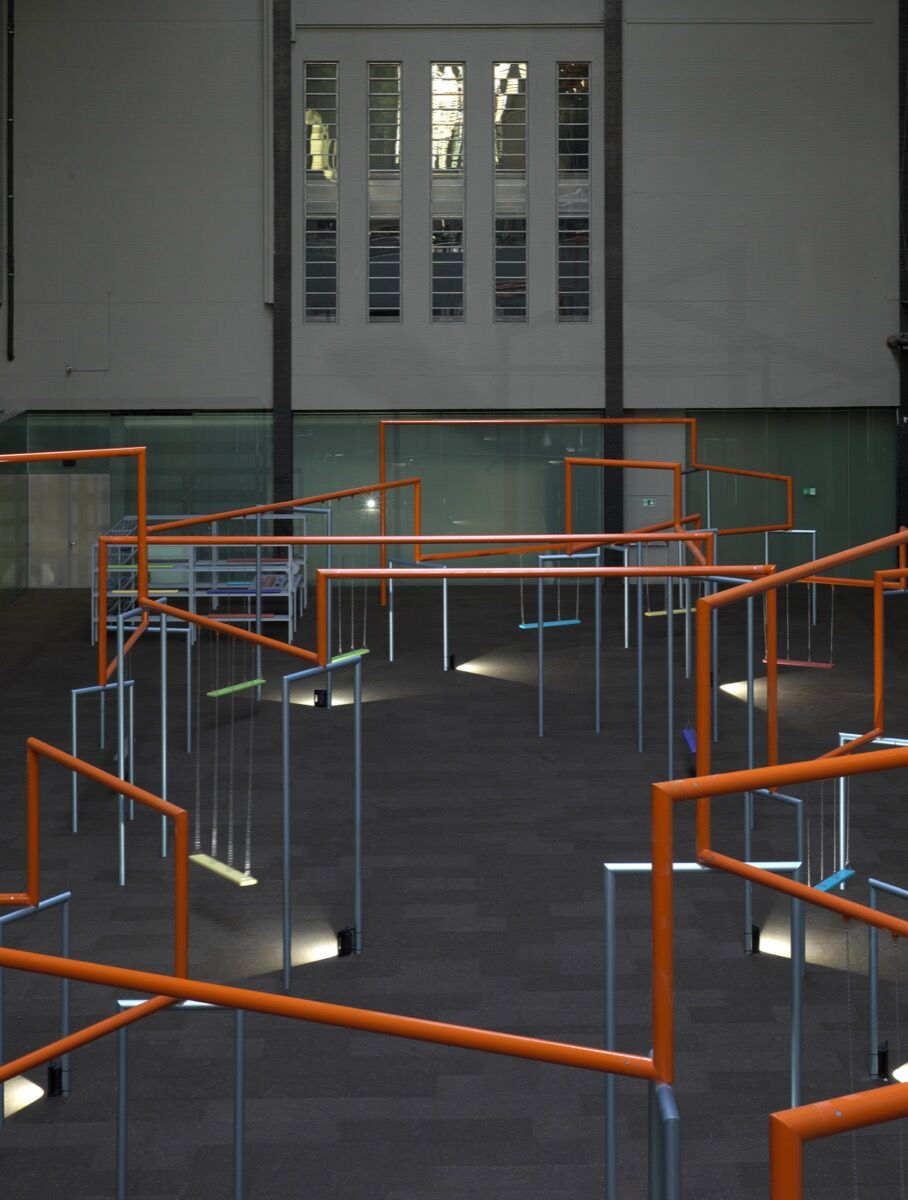 One Two Three Swing! features a giant pendulum swinging over a carpet printed with the color scheme of British banknotes, as well as over 30 three-seater swingsets attached to a labyrinthine orange pole that snakes throughout the space.
When the Bankside Power Station was converted starting in 1996, the fledgling Tate Modern designated its former heart, the Turbine Hall, as a “street,” freely open to the public. SUPERFLEX have pushed the logic to its extreme, blurring the distinction between the museum’s indoor and outdoor spaces, and nodding towards the site’s history as a generator of energy.
The piece continues the collective’s exploration of public space as a lab for social experiments—an impulse that led them to create urban parks in Copenhagen (Superkilen, 2011) and Sharjah in the United Arab Emirates (The Bank, 2013). SUPERFLEX hope that visitors here will go from apathetic viewers, staring at the pendulum ominously moving above their heads, to active participants, swinging together. 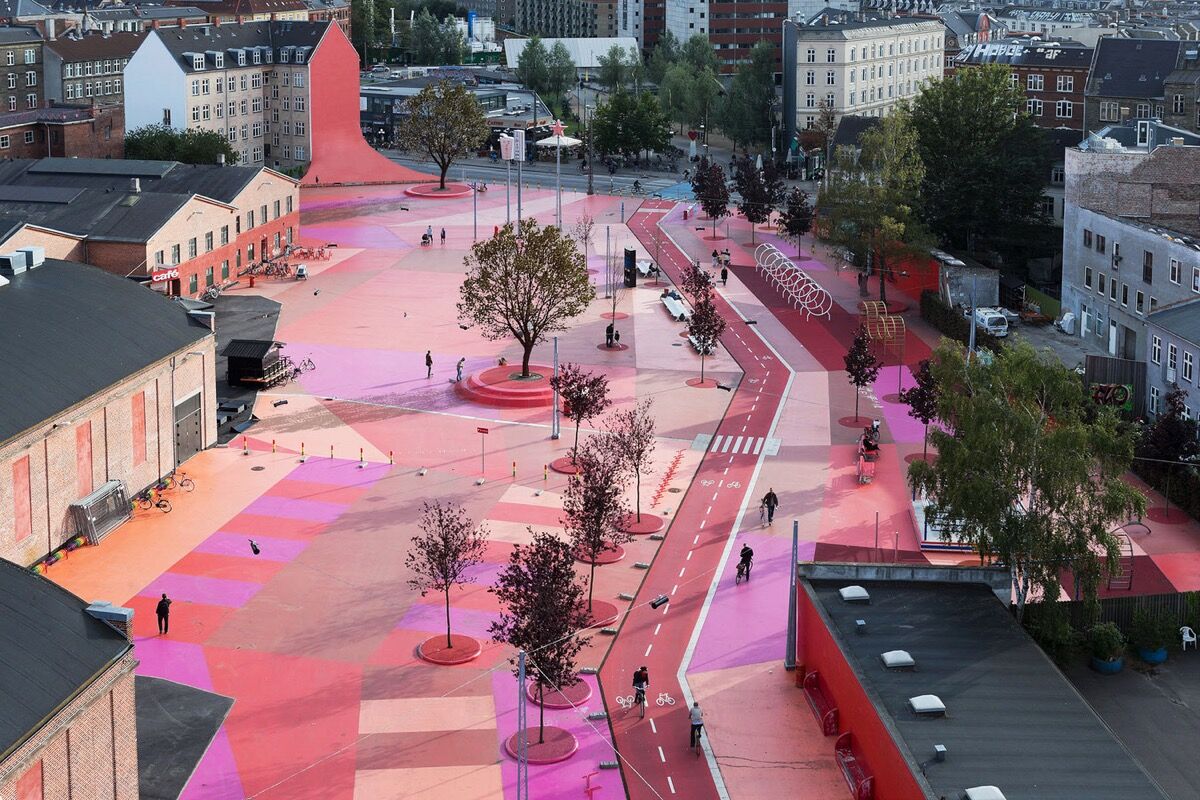 Advertisement
The group has never shied away from using direct, perhaps heavy-handed symbols (see for instance their films Flooded McDonald’s (2009) or Burning Car (2008) which show exactly what it says on the tin). In the case of this new installation, the swings are almost too heavy to be used solo. When I tried to give one of them a go this morning, it quickly became obvious that I wouldn’t go very high without companions. I asked a few strangers to join me and, properly ballasted, our swing finally took off: One Two Three Swing!
“Something happens when there’s two or three of you on a swing,” says Christiansen. “Once you’ve found your balance, you can create a much more powerful movement and a higher level of energy. The whole process [of the piece] is focusing on the power of collaboration.”
One Two Three Swing! is the first Turbine Hall commission to reach beyond the institution’s walls—and the first masterminded not by an art curator, but by Tate’s Head of Regeneration and Community Partnerships, Donald Hyslop. Its overt inclusivity is a fundamental aspect of the project, and it speaks volumes about the museum’s priorities as a contemporary organization. The distinctive swingsets will pop up in three other locations throughout south London, visually linking private businesses, parks, and housing blocks. Other sites in town and abroad are currently being envisaged. (Visitors are encouraged to leave suggestions in a small side room labeled “the Bank of Opportunities.”)
“People who normally wouldn’t give a shit about going to an art exhibition can interact with the work outside of its confined art space,” as Christiansen simply puts it. 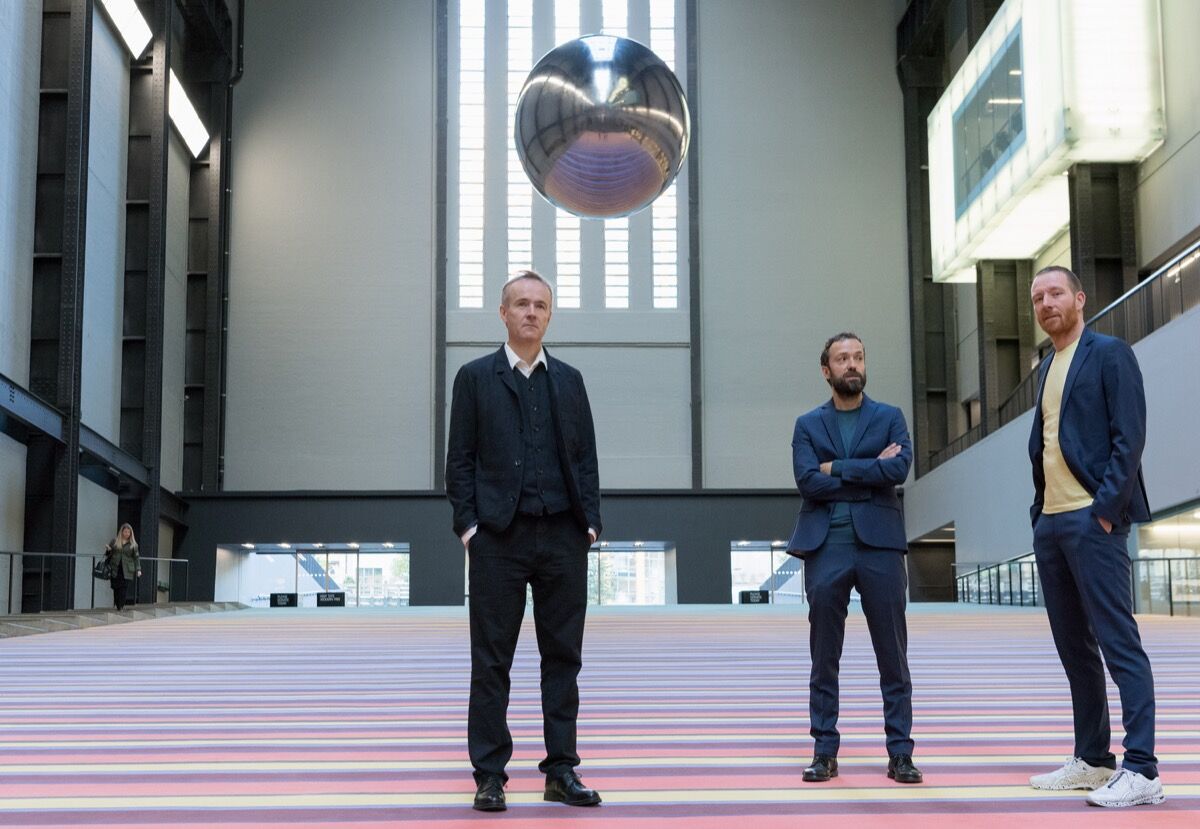 SUPERFLEX was founded in 1993, and the group is a child of the 1990s in more than one way. Their work is emblematic of the
Relational Aesthetics
theorized by Nicolas Bourriaud in 1998. It also shows signs of influence from Piratbyrån, a Swedish think-tank-type organization that, as the Internet expanded, championed open-source culture and fought against copyright infringement laws (some of its members went on to found the torrent search engine The Pirate Bay in 2003). SUPERFLEX’s motto is “if value then copy” and, to this day, their artworks are designated as tools, meant to be appropriated, used, and transformed by others. One Two Three Swing! has been conceived as an test, and the group hopes that if it’s considered successful, its modular architecture could be replicated elsewhere.
It’s easy to be cynical about artists hoping for interaction in the context of a high-profile exhibition. (Installations in which a bunch of chairs are meant to foster local community-building have become a biennial cliché.) But one can safely bet that SUPERFLEX’s swings will be thoroughly used wherever they pop up; it’s possible some of these impromptu riders won’t know they’re sitting on an art installation, but they might get that doing it in threes is faster and all around more fun than doing it alone. And in these days of creeping isolationism, that’s a vital point.
When
Carsten Höller
opened his Turbine Hall installation featuring metal slides back in 2006, the show triggered endless debates around art as entertainment. How should we react to Höller’s kid-friendly slides—or to a piece like
Ann Hamilton
’s 2012 installation at the Park Avenue Armory, which also involved swings? The idea that an artwork could be both a valid aesthetic proposition and fun clearly remains challenging for many. I asked Christiansen if he thought One Two Three Swing! would be seen as a populist crowd pleaser, but he dismissed the idea as “ridiculous thinking.” The key, he says, is for people to engage with the work. “We use humor and play because it can often challenge the social structures that you are part of.” 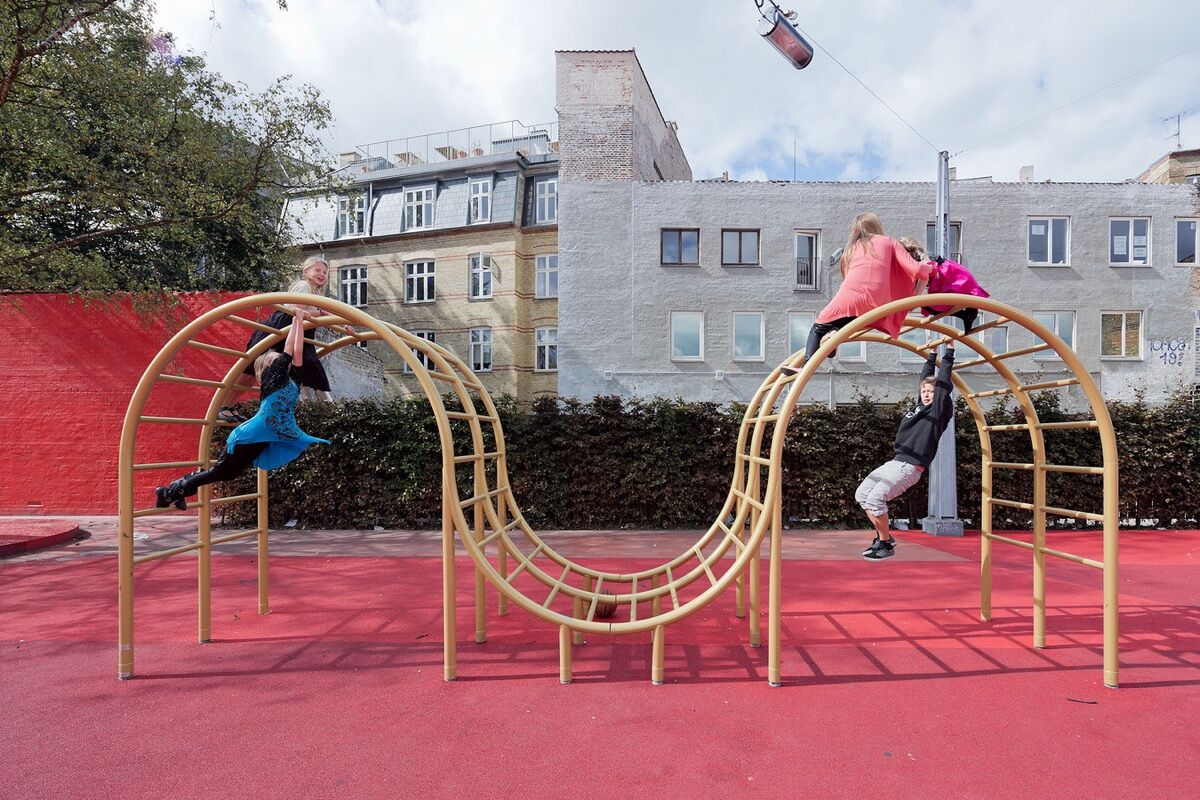 For all this radical talk, though, it’s not always clear exactly which “social structures” SUPERFLEX are talking about. The Tate, for instance, is a complex power structure itself, tainted, like all museums, by a Western-centric legacy (although it’s among the institutions that have done the most to address that history). Its private and corporate patrons have also cast a long shadow recently. Following years of protests against its sponsorship by BP, Tate ended its deal with the oil giant in 2016. The museum was criticized for its decision to rename its new wing the Blavatnik building, after the foundation of billionaire Len Blavatnik donated £58 million ($65 million)—the biggest gift in Tate’s history.
While Christiansen refuses to refer to the museum’s new building by the donor’s name—calling it instead, pointedly, the Herzog & de Meuron building—he’s clear that the piece contains no critique of Tate itself, for which he has only praises. Ditto for Hyundai, the Korean car manufacturer, which has sponsored the commission since 2015. “There’s never been anyone who has said no to anything we have proposed” for the Turbine Hall, the artist says.
SUPERFLEX’s target, then, is instead more amorphous: the forces that keep us apart; the fear of the other; social norms that dictates you shouldn’t look at a stranger in the eye, or strike up a conversation unprompted. The trio hopes that the promise of an enjoyable ride will entice people to start chatting, sit together, and coordinate their swinging legs. While One Two Three Swing! isn’t SUPERFLEX’s hardest-hitting piece—somewhat surprising given the collective’s previous work, and the current political climate—its message is nonetheless urgent. And unlike so many artworks hoping to trigger human exchange, I’m convinced this one will work. In the age of the filter bubble—when Western Europe is more divided than perhaps ever since World War II—anything bringing us together should be celebrated.
Coline Milliard
Related Stories