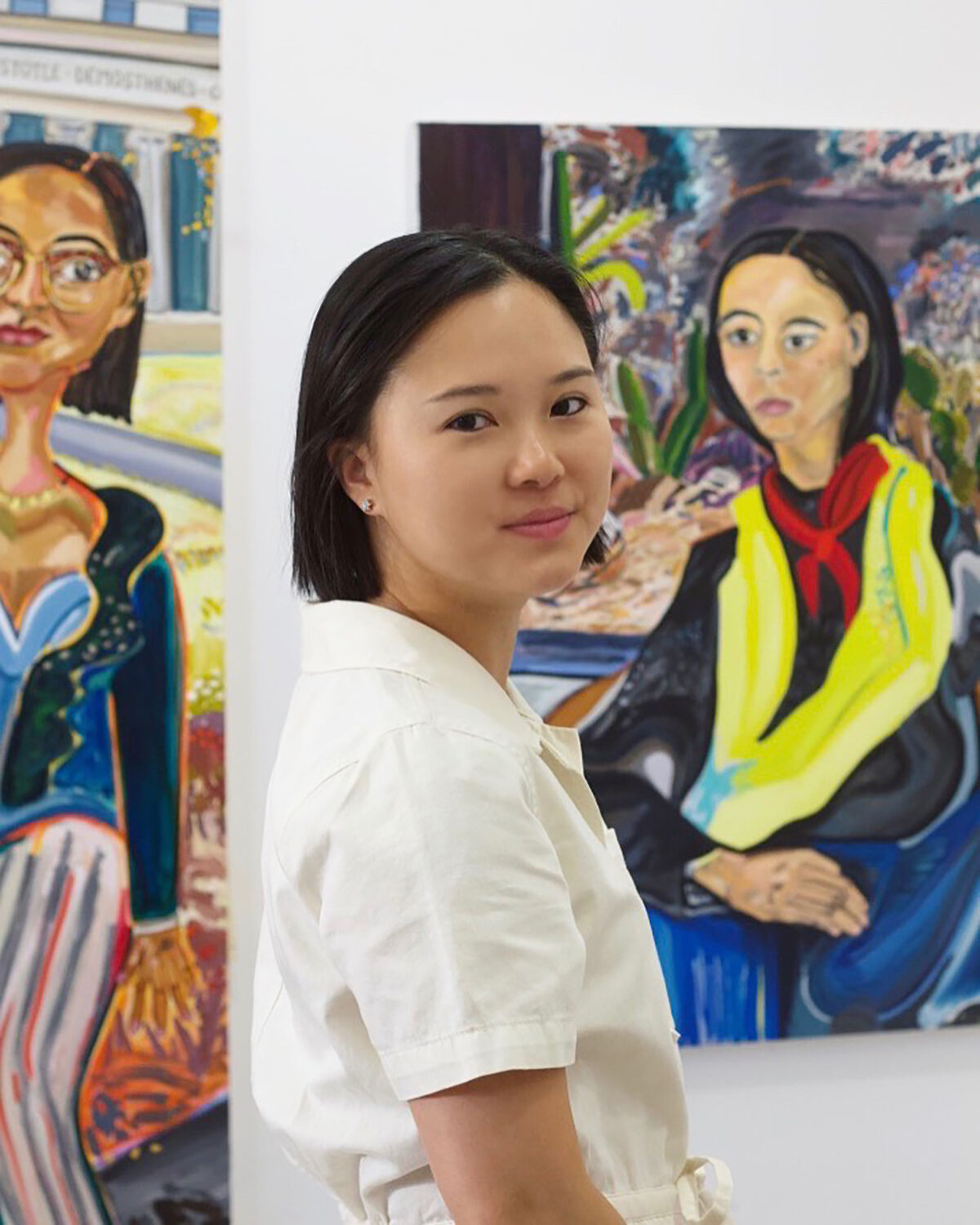 Portrait of Susan Chen. Courtesy of the artist. 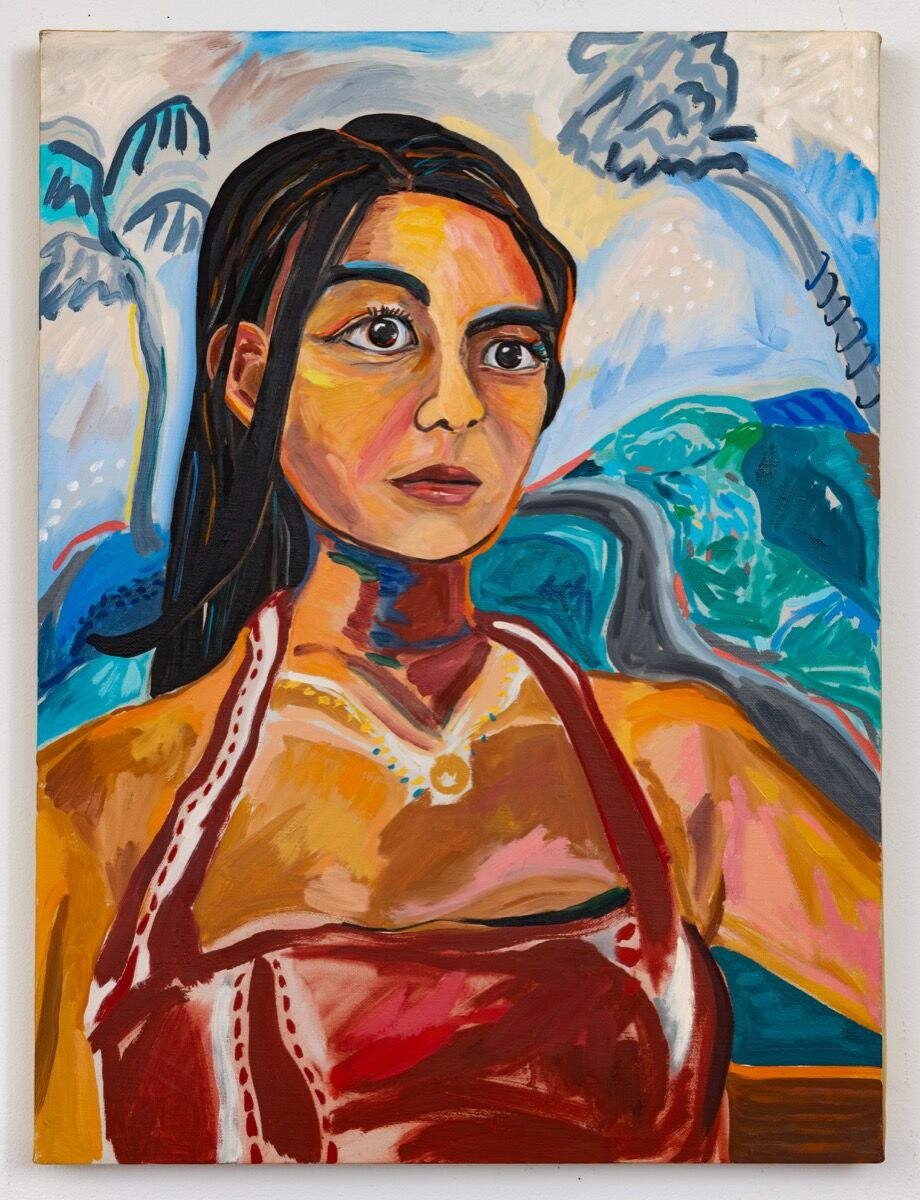 Just months after receiving her MFA from Columbia University,
Susan Chen
sold out her first solo exhibition at Meredith Rosen Gallery in New York before it officially opened in August. The show, titled “On Longing,” is on view until September 26th and features two new bodies of work: portraits of strangers whom Chen approached in various Asian and Asian American Facebook groups, from Subtle Asian Traits to Chinatowns of New York; as well as self-portraits created during shelter-in-place.
Materializing out of bold brushstrokes in various shades of yellow and brown, the subjects in the 28-year-old’s paintings are people who have been completely excluded from dominant visual culture, or have historically lacked control over their own likeness.
Andrew J. Russell
’s photograph commemorating the completion of the first transcontinental railroad—which included only two Chinese laborers—and Arnold Genthe’s manipulated images of San Francisco’s Chinatown in the late 19th and early 20th centuries immediately come to mind. Chen’s work fills a prominent gap in the tradition of figurative painting and, at the same time, raises questions about the limits of representation. 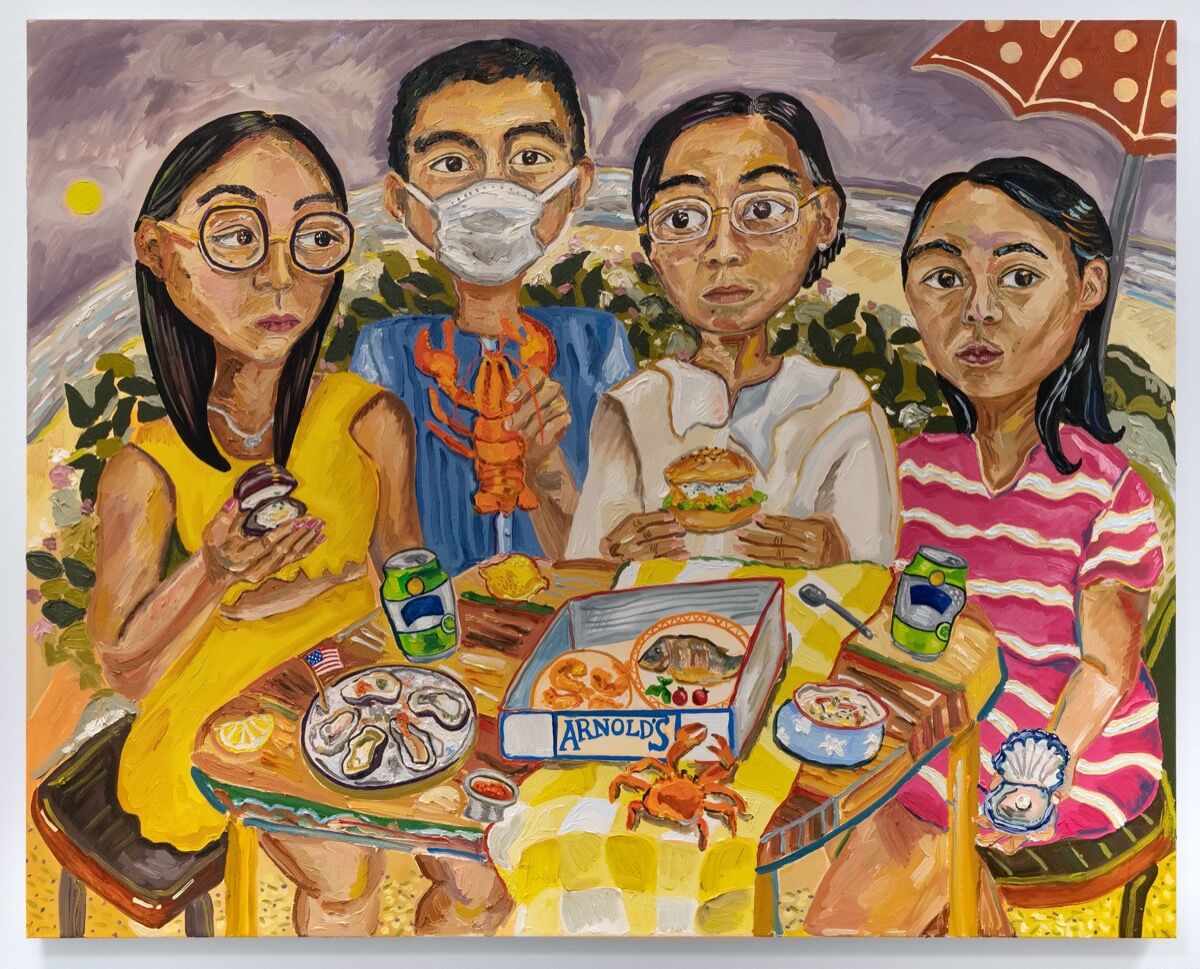 Chen was born and raised in Hong Kong when it was transitioning out of British colonial rule; then, she relocated to the United Kingdom for boarding school at the age of 12. She is keenly aware of the Western-centric nature of her academic background and upbringing. “I’m making this work, but my education comes from this one-sided lens,” Chen said. “When you, yourself, and your culture are different, you try to find a way to merge the two.”
Ultimately, it wasn’t an artist of the Asian diaspora that inspired Chen’s artistic pursuits, but
David Hockney
. While studying abroad the summer following her sophomore year of college at Brown University, Chen visited “David Hockney: A Bigger Picture” at the Guggenheim Bilbao. “It completely changed my life,” Chen recalled. She started painting during her junior year before deciding to double major in visual arts and international relations. Although “On Longing” features portraits exclusively, Chen’s entryway into painting was through the landscape. Her bright color palette, seen through the purple tree trunks and blue shrubbery in Pink Pathway (2016), illustrates Hockney’s influence. 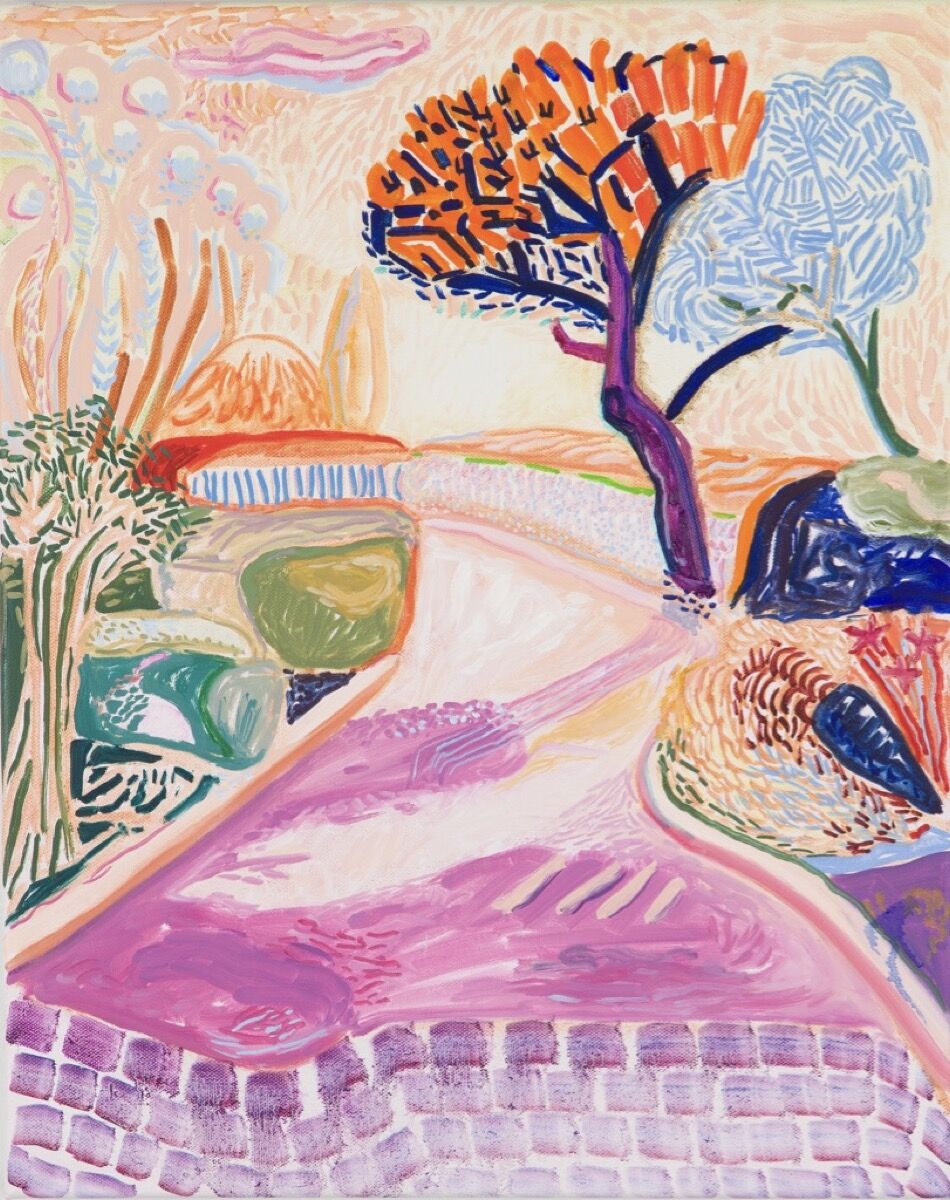 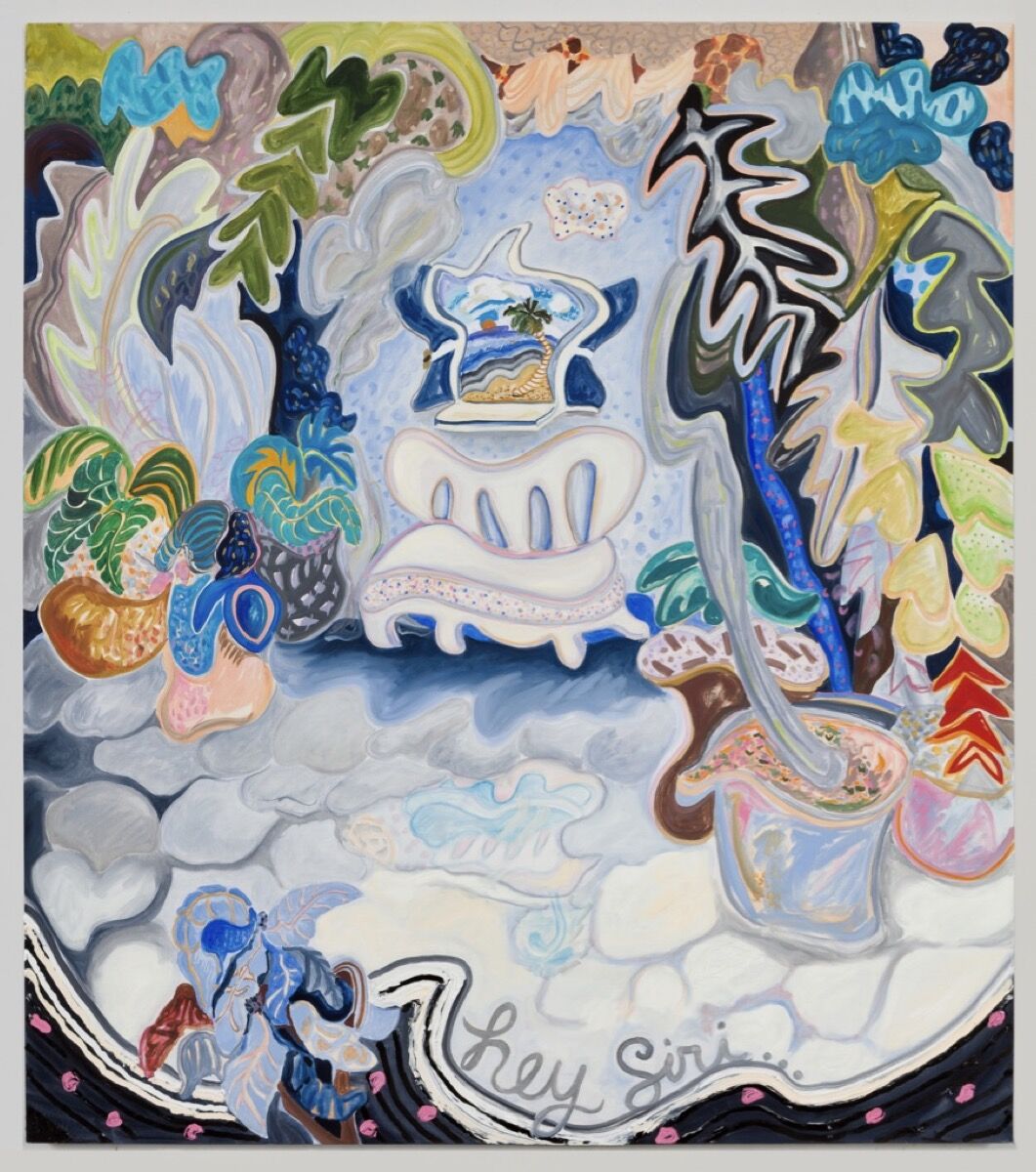 Advertisement
“I think landscapes in general are so much about longing,” Chen said. “A lot of them have the feeling of ‘I’m here but I’d rather be there.’” For example, 👻 (2017) depicts an undulating interior scene with a view of the beach through a small window. The miniature landscape is reminiscent of
Henri Matisse
’s paintings of open windows, such as Girl by a Window (1921), yet instead of a forlorn figure, plants and a lone loveseat occupy Chen’s scene. “The abstract scenes with chairs were also metaphorical portraits for my sister and I,” Chen explained. “We are the only ones in the family who immigrated to America.”
While pursuing her MFA, Chen’s focus shifted to the figurative works that have come to represent her practice. “I look at my figures as if they were landscapes,” Chen said. In Tadashi Mitsui (2020), for instance, squiggles of yellow, brown, and orange form the sitter’s face; blue paint articulates his jawline, while his eyelids are traced with purple. Although Chen hoped to continue painting others, the outbreak of COVID-19 forced the artist to turn to self-portraiture. In March, she had to leave her Columbia MFA studio with just a few days’ notice, and converted her living room into a makeshift art studio. 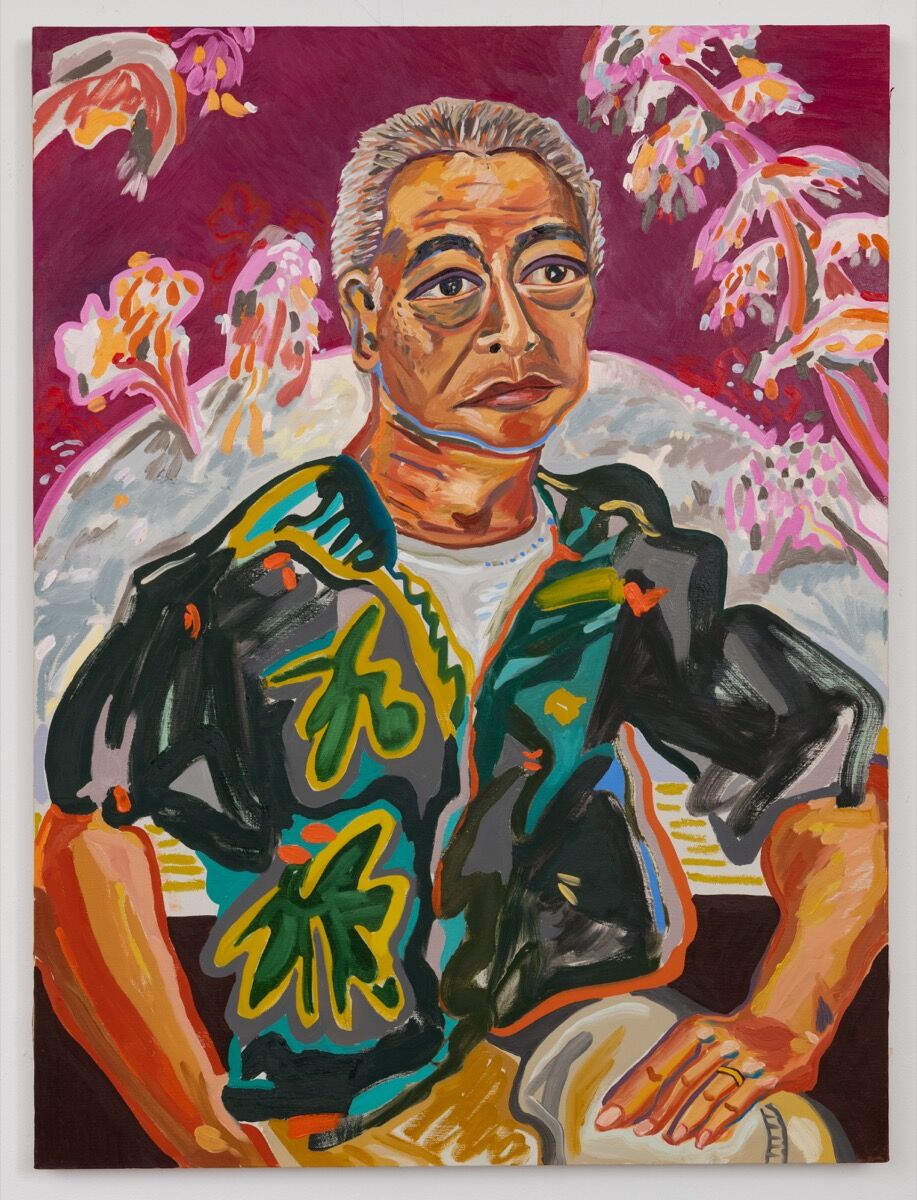 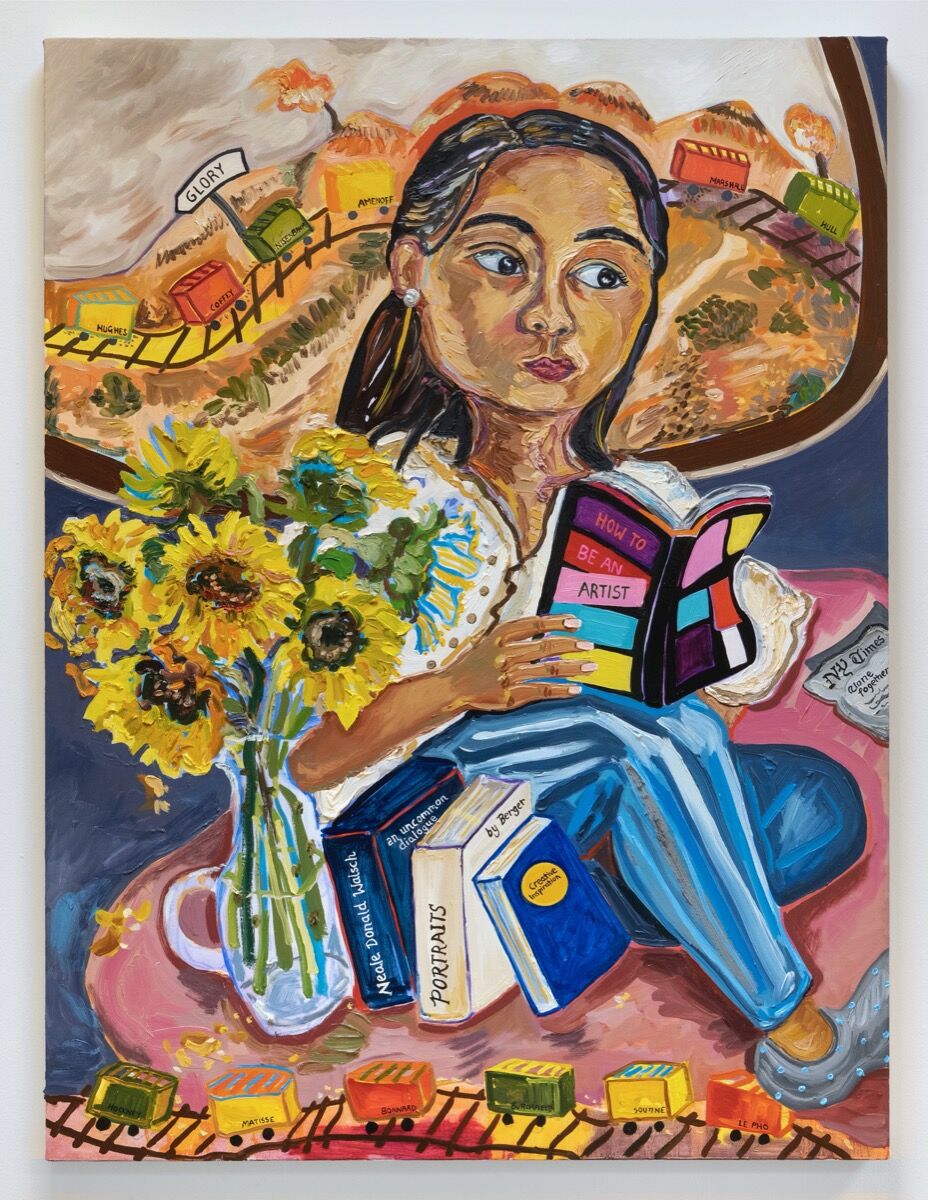 In Street Cars of Desires (2020), Chen is seen seated beside yellow sunflowers, evoking
Vincent van Gogh
, and a small collection of books. We see Neale Donald Walsch’s Conversations with God: An Uncommon Dialogue (1995) that has calmed Chen during moments of high anxiety, John Berger’s Portraits (2015), and a book of Van Gogh quotes that Chen sleeps next to and calls her “no-quitting book.” Off to the side is the New York Times review of the group exhibition “Alone Together” at Steve Turner. (Turner originally offered Chen a solo exhibition, but she suggested a group show with her fellow graduating class instead.)
The painting shows Chen reading Jerry Saltz’s How to Be an Artist (2020), while one of the book’s exercises—to make a train of artists you feel connected to—takes shape around her. One such artist for Chen is
Shara Hughes
, for whom she was an assistant between 2016 and 2017. Other train cars are labeled Hockney, Matisse,
Bonnard
, and others, including the only named artist of color in the work—modernist painter
Lê Phổ
. “I had all these painting books in my studio, and someone asked me why they’re all white male painters,” Chen said, reflecting on the prominence of Eurocentric institutions and resources. “Literally, that was what I could find in [Columbia’s library]. I went into the painting section and that was what they had.” 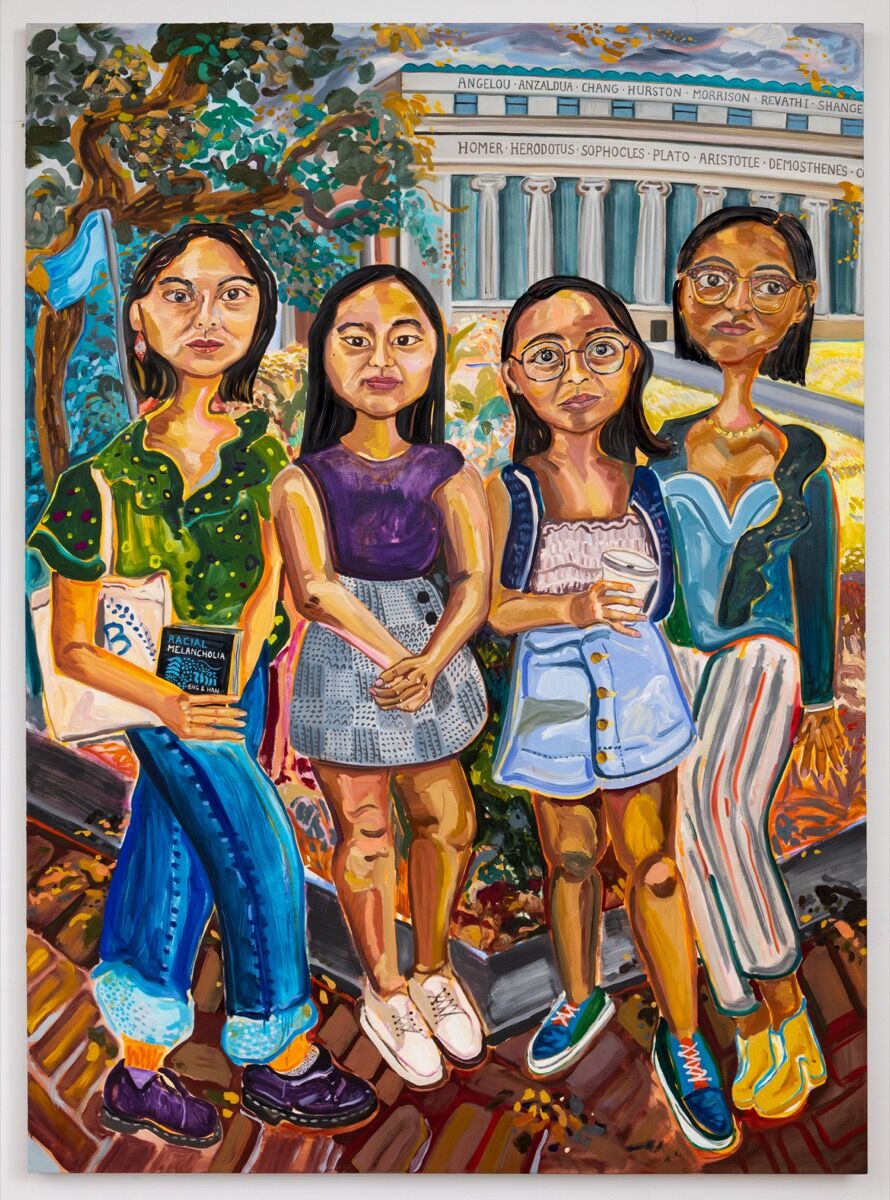 Susan Chen, About Face, 2020. Photo by Adam Reich. Courtesy of the artist and Meredith Rosen Gallery. 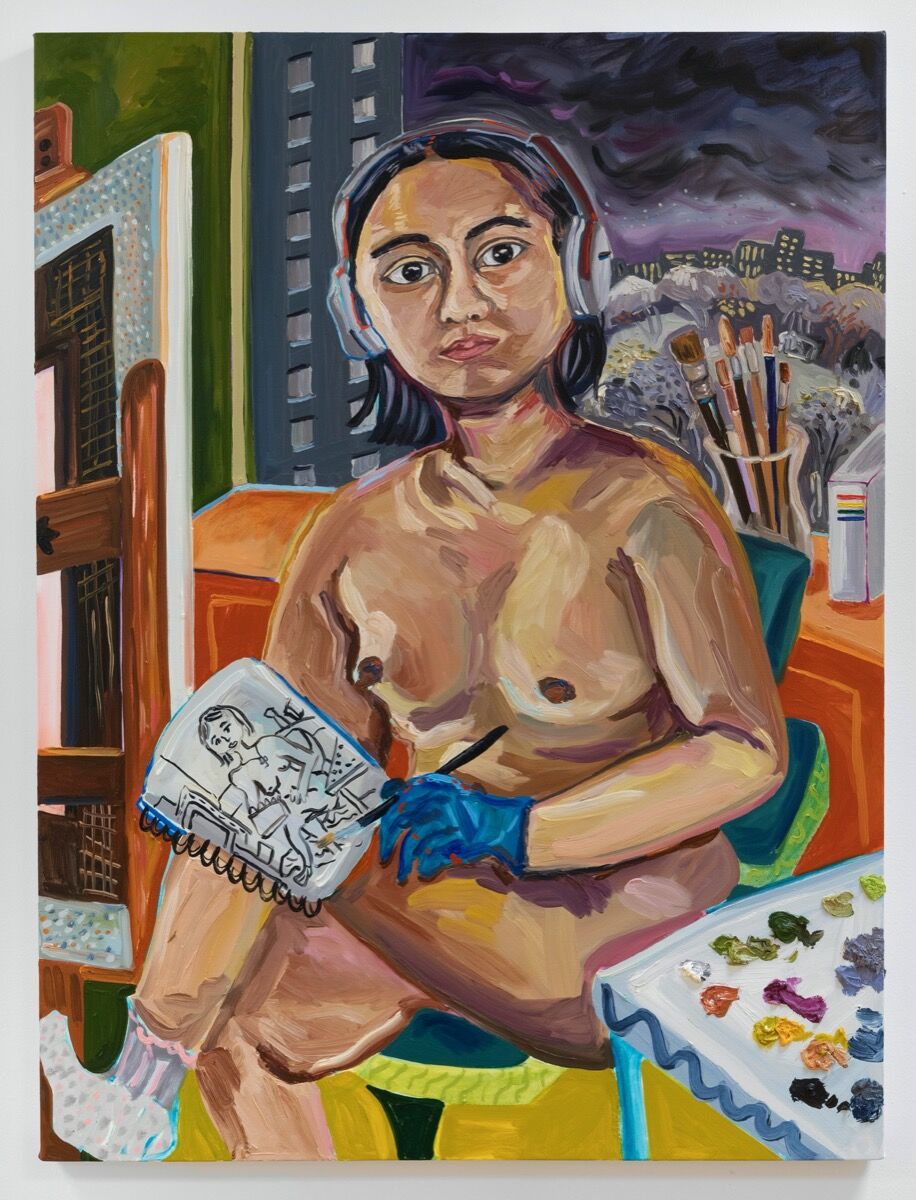 Chen tackles these flaws in our academic system more explicitly in About Face (2020), in which Columbia University’s Butler Library is depicted with an additional, imagined frieze carved with the names of several prominent female writers of color. Alluding to the banner of women writers—most of them white—unfurled by Laura Hotchkiss Brown and four friends in 1989, Chen imagines a permanent intervention based on the third and most recent iteration of the Butler Banner (now supported by the university).
Chen encountered similar biases in her art studio courses as well. “When I first started figuring out how to paint figures during my MFA, I was taught (only) about two palette systems: the Cheetham’s Mud Palette and Zorn Palette. I couldn’t find a palette system for painting Asians,” Chen remarked. “One has to assimilate with the palette, too.”
Theories of assimilation appear in About Face, in which one of the four young women of Asian descent depicted outside the Butler Library carries a copy of Racial Melancholia, Racial Dissociation: On the Social and Psychic Lives of Asian Americans (2019) by David L. Eng and Shinhee Han. Building on Freud’s theories on melancholia, Eng and Han describe racial melancholia as the unresolved feelings of loss experienced by Asian Americans due to migration and an inability to reconcile the unattainability of assimilation and the American Dream. Oftentimes, this is compounded by historical amnesia in which the range of cultural production and history of activism by Asian Americans feels unknowable. Since this knowledge is not readily available to immigrant communities, we’re unable to build upon the work of our predecessors, instead reaching the same conclusions decades later and leading to feelings of collective stagnation. 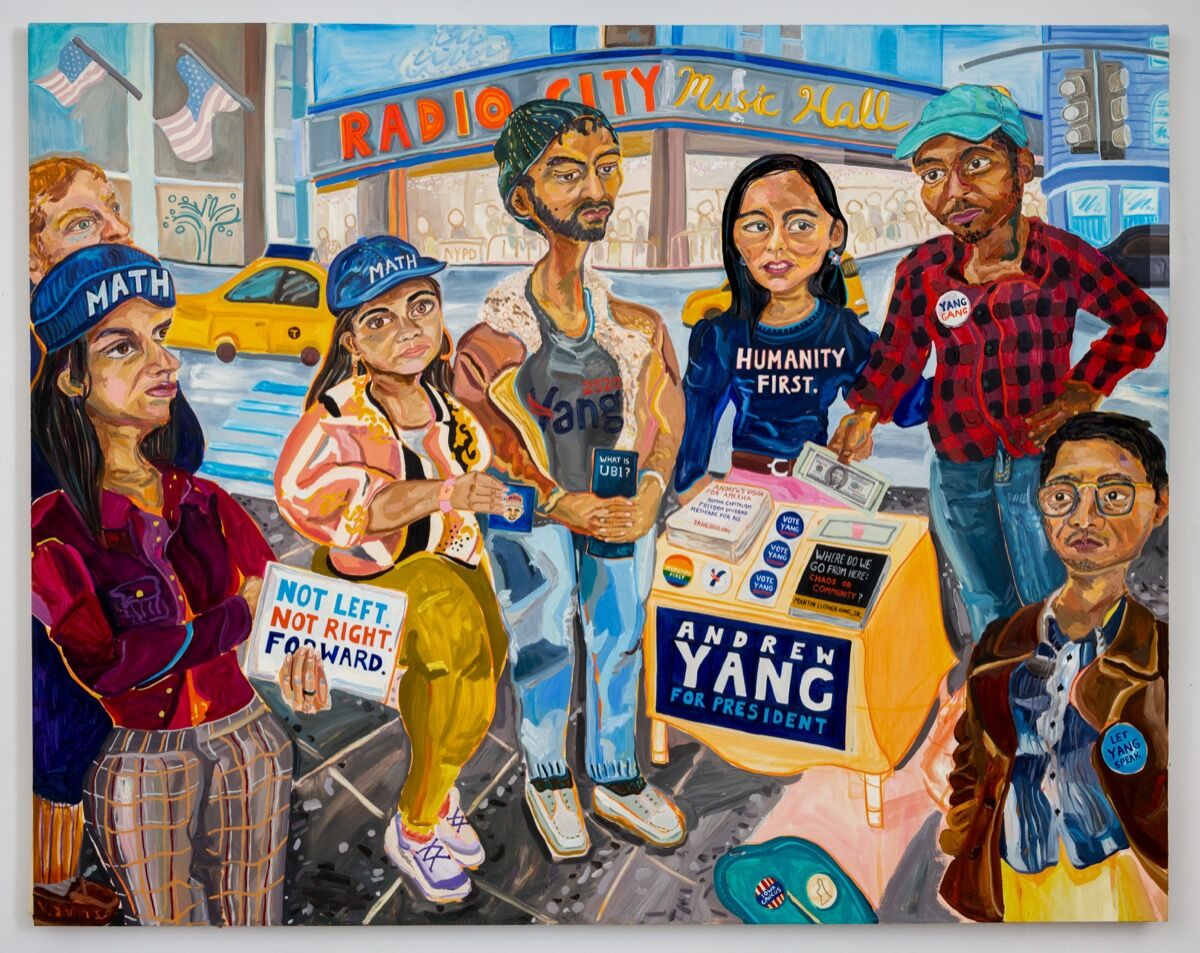 Perhaps this is why we cling to instances of Asian American representation in the mainstream as indicators of progress. In Yang Gang (2019), a group of supporters table outside Radio City Music Hall for Andrew Yang, the first Asian American to run for president as a Democrat since Hiram Fong campaigned as a Republican in 1964 and again in 1968. Chen assembled the group by posting a call for sitters in Yang Gang Facebook groups across the five boroughs. “I was more excited about Yang Gang than I was about Andrew Yang,” Chen admitted.
Filled with the ephemera and merchandise from Yang’s presidential bid, the scene feels absurd as all of Yang’s slogans visually collide. With blue caps emblazoned with the word “math,” Yang leans into rather than rejects the model minority myth in an effort to reclaim the stereotype, ignoring its anti-Black origins. Yang has become one of the most prominent Asian American political figures in U.S. history, but remains a rather divisive character amongst Asian Americans, recently coming under fire for suggesting that assimilation and patriotism are appropriate responses to the rise in anti-Asian hate crimes. 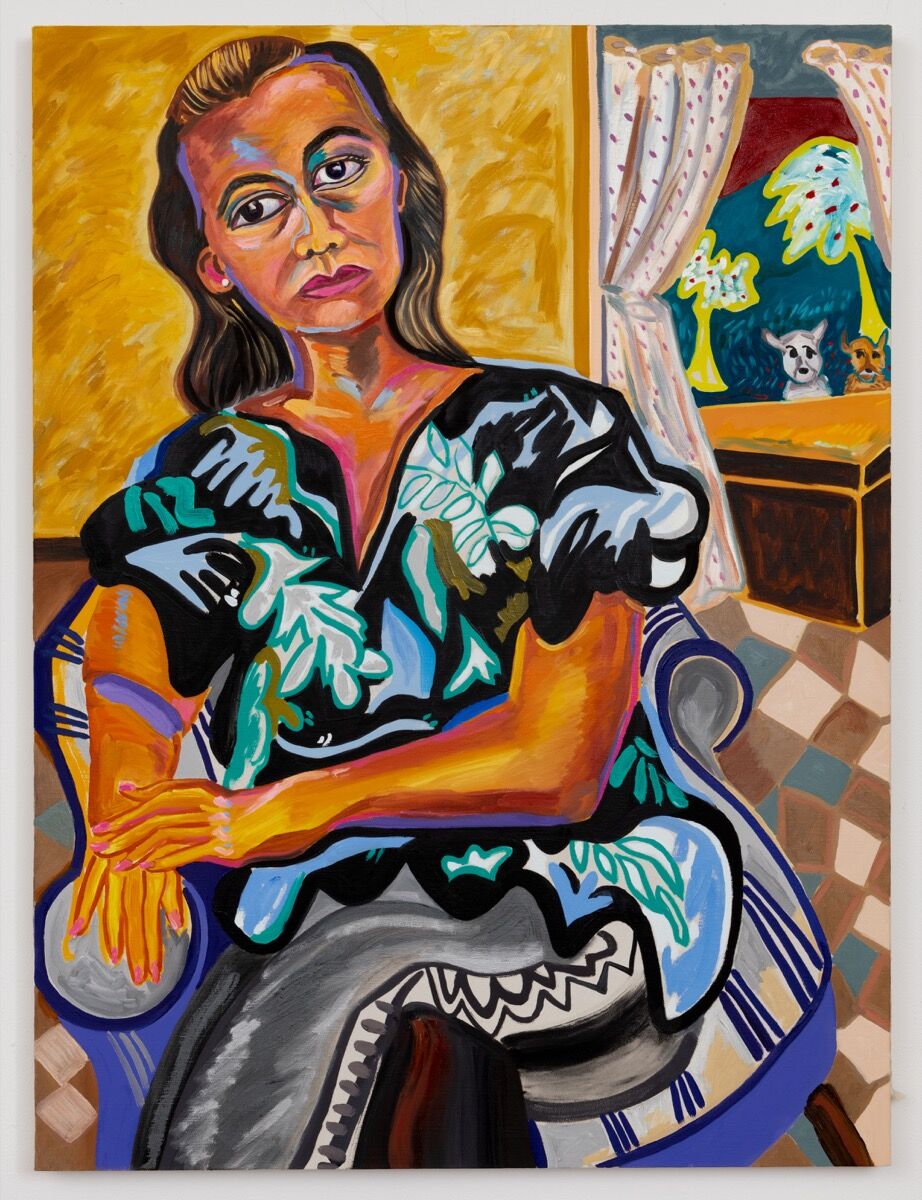 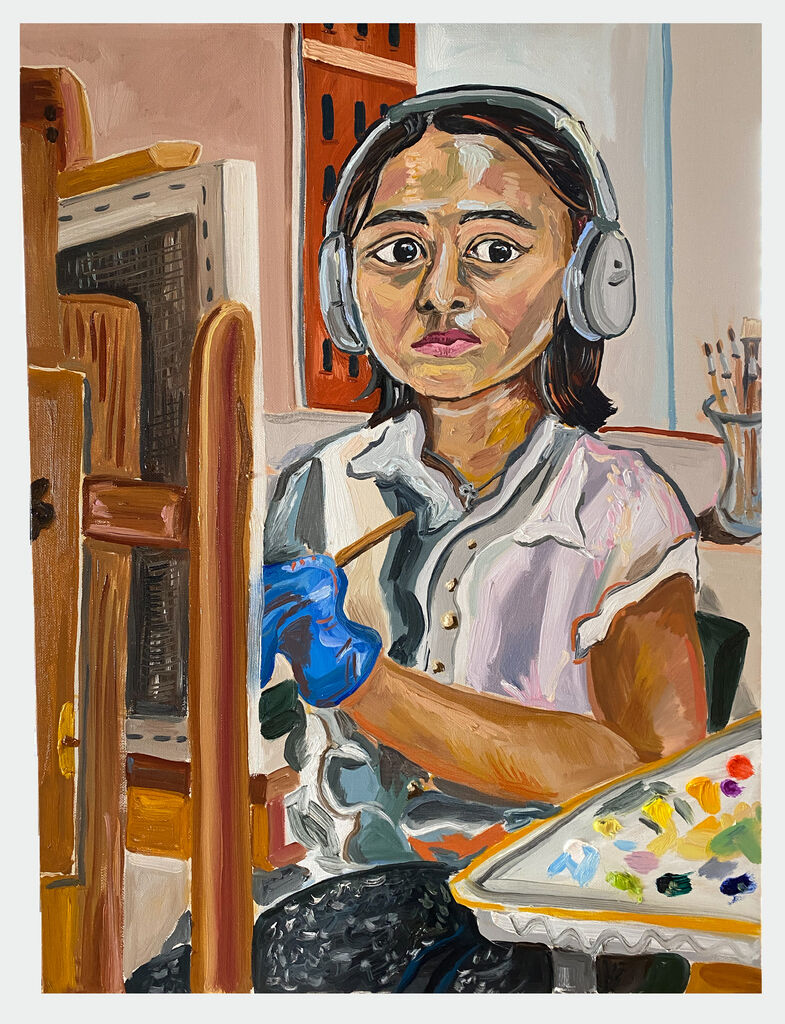 Susan M B Chen
First Self-Portrait, 2020
Steve Turner
It’s interesting that Chen finds her sitters on Yang Gang Facebook pages as well as Subtle Asian Traits. Both groups of this nature are interested in Asian American representation, but are polarizing for their tendency to attract very specific niches of Asian Americans. Subtle Asian Traits, with more than 1.8 million members worldwide, has garnered criticism for content that runs the risk of reducing Asian cultures to consumer goods, normalizing trauma and domestic violence, and refusing to engage with current sociopolitical events.
The concept that underlies much of Chen’s practice is the limits of representation. While seeing Asian Americans on-screen can feel validating, media projects that tout an all Asian cast do not necessarily entail complex characters with compelling stories. During this election cycle, it’s become increasingly clear that electing a person of color into office does not intrinsically lead to policy decisions that are considerate of marginalized groups in the U.S. and abroad. Calls for diversity are futile without an accompanying multiplicity of ideas and perspectives, and inclusion into dominant culture stops short of liberation. 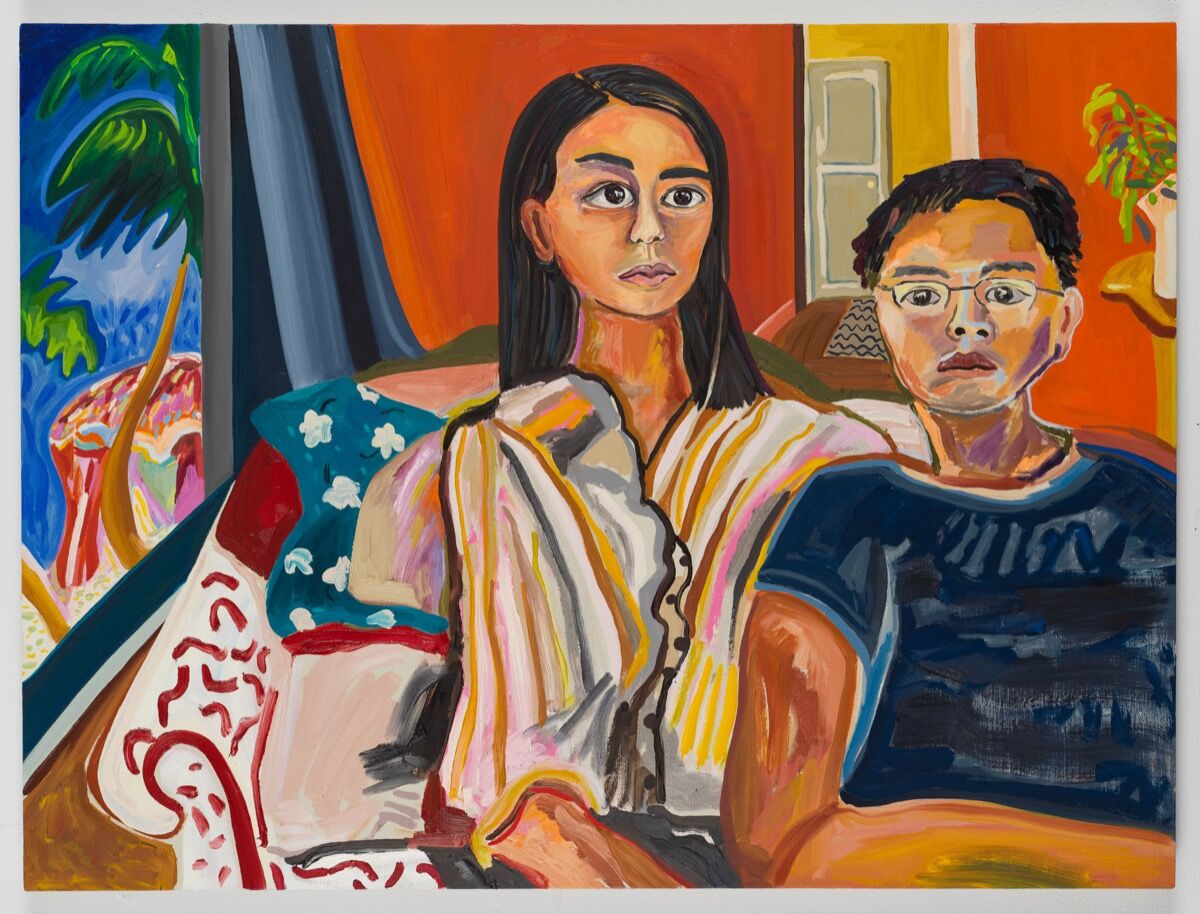 Pivoting away from the lack of Asian American representation, Chen’s upcoming project considers Asian Americans as hypervisible, perpetual foreigners in the wake of COVID-19, revealing that our “model minority” status was always circumstantial. Addressing an increase in anti-Asian hate crimes, Chen is currently seeking sitters to paint via Zoom with the aims of the project culminating into more than 40 canvases of Asian Americans.
One of Chen’s earlier works, #InjectDisinfectant (2020), also confronts the pandemic. Hooked to an IV resembling a Clorox spray bottle, Chen is pictured casually sipping Lysol through a straw. A number of artists have created new works referencing the pandemic through face masks and hand sanitizer, but Chen’s self-portrait also alludes to recent acts of racial violence. As someone of Chinese descent, Chen consumes and injects disinfect into her body as if she herself is the contagion. 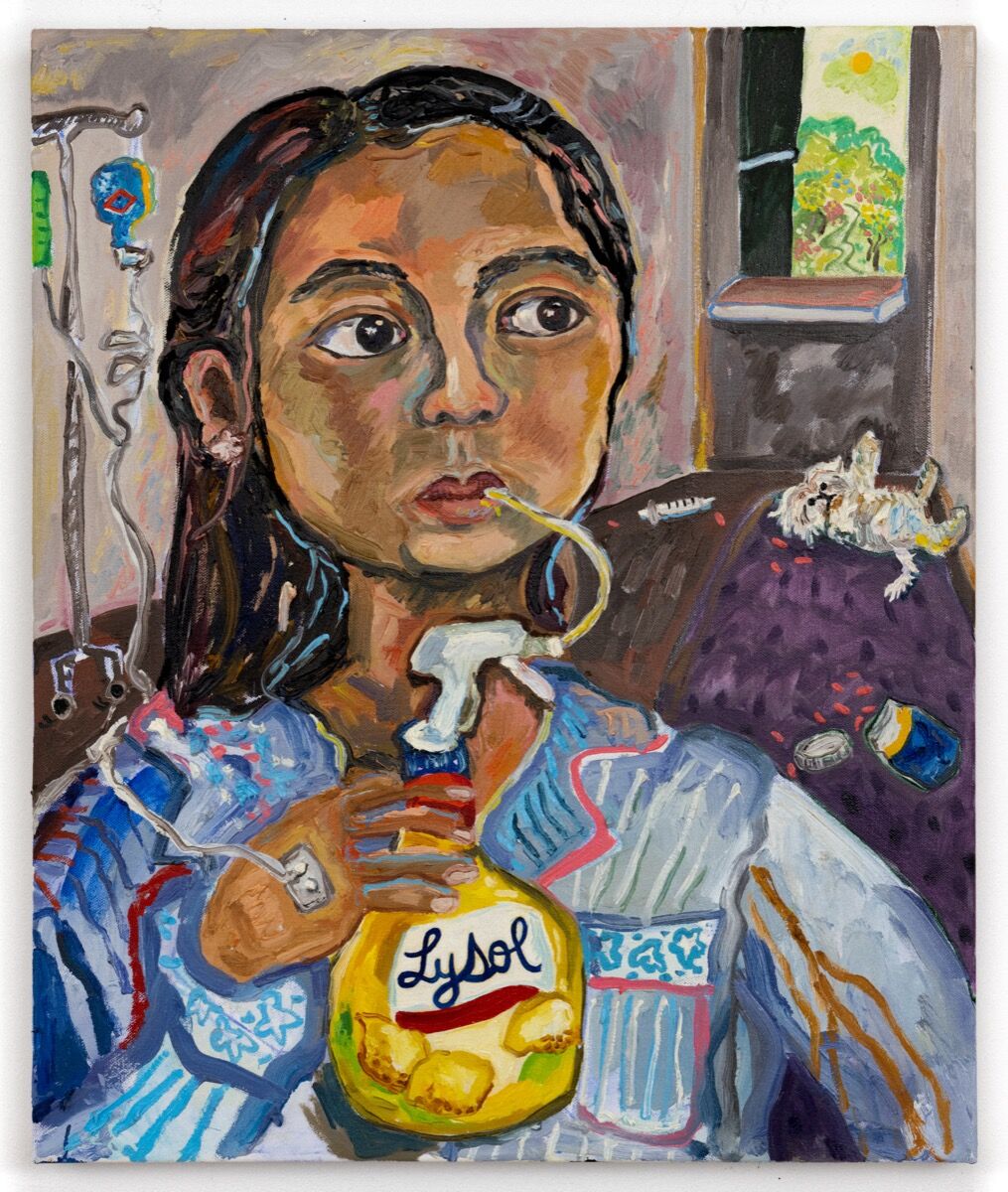 Susan Chen, #InjectDisinfectant, 2020. Courtesy of the artist and Steve Turner. 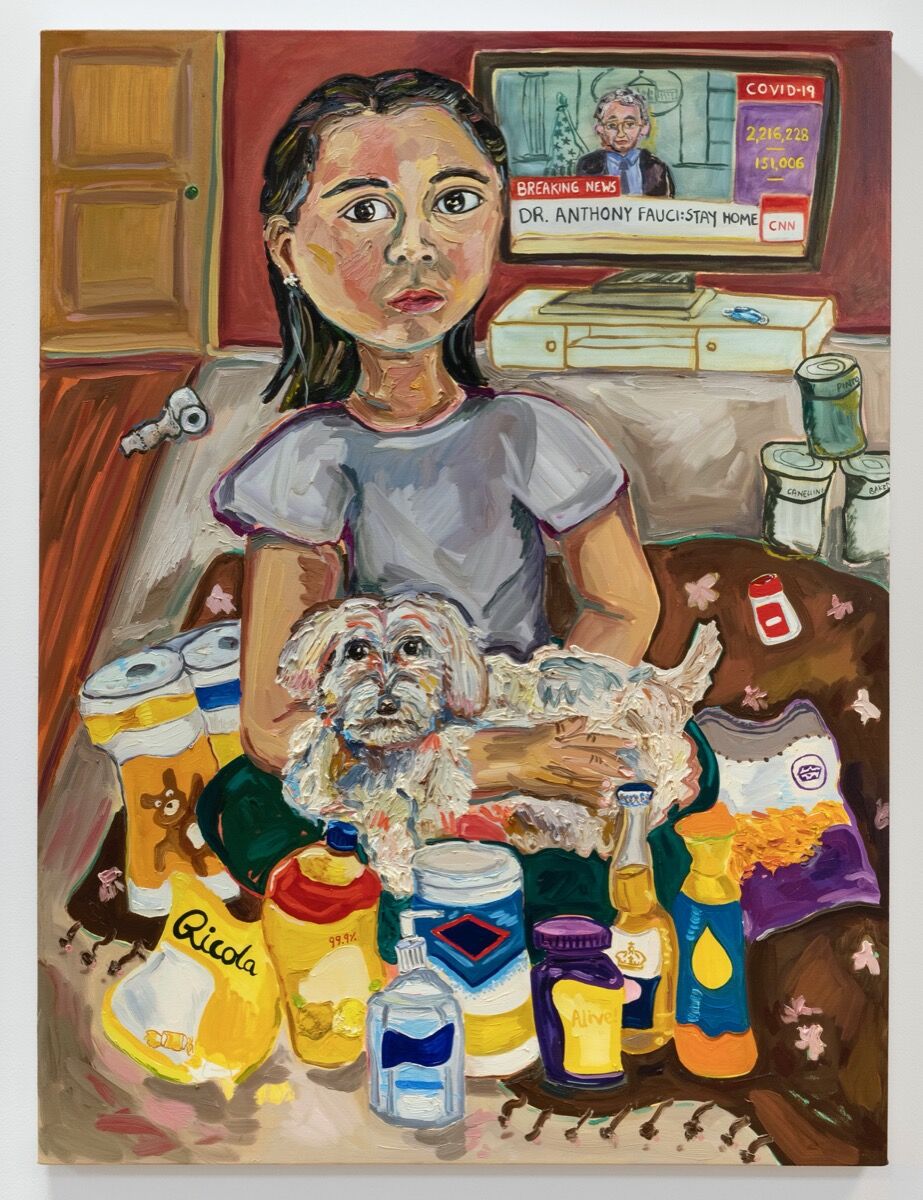 Beliefs connecting race to cleanliness, or the lack thereof, have a historical precedent. An 1870 illustration from Leslie’s Illustrated Newspaper, for example, depicts the supposed dirtiness of a Chinese laundromat in San Francisco—one man can even be seen spitting on the clothes. This fear of the Other eventually culminated into the Chinese Exclusion Act of 1882, which was replaced in 1943 with a quota system that only ended in 1965. Yet notions of an inherent dirtiness resembling that of race science persists today.
In conversation with a rich past and present, Chen has yet to show her MFA thesis exhibition, which has been postponed to April 2021, but already had a waiting list for her first solo show. Over the phone, she recalled a
Philip Guston
quote to me: “When you’re in the studio painting, there are a lot of people in there with you—your teachers, friends, painters from history, critics…and one by one, if you’re really painting, they walk out.”
Harley Wong
Related Stories