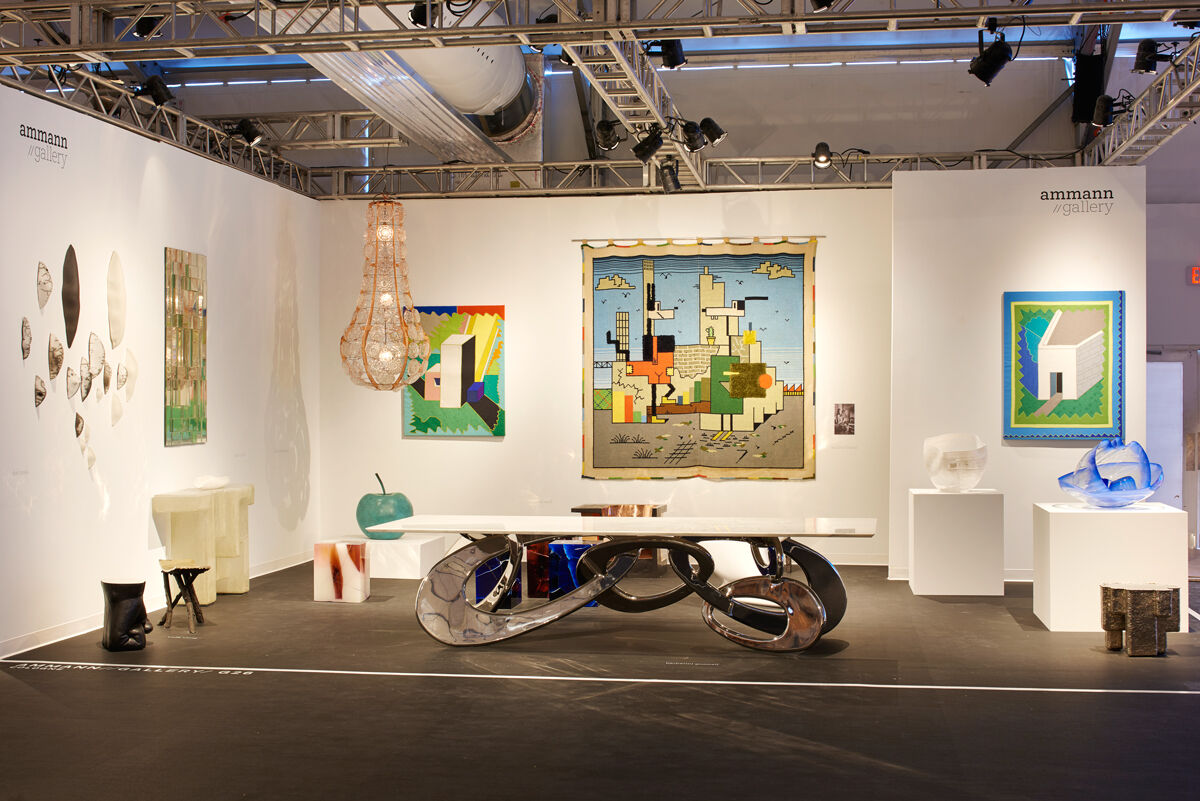 Design Miami/ opened its doors on Tuesday with a new look and a big announcement. The fair, which has made a perennial home in Miami since 2010—and has since established itself as the leading platform for innovative design, both historic and brand spanking new—will be partnering with the United Nations in 2017. Together they’ve formed an initiative called “Building Legacy: Designing for Sustainability,” which was created to help mobilize the intergovernmental organization’s 2030 Agenda for Sustainable Development. The result is an unprecedented relationship for a commercial art or design fair.
“This fair is all about how our lives can be improved by thoughtful design and thinking,” said Design Miami/ executive director Rodman Primack in the opening hours of the fair. “It’s not just about making something, it’s about making something better and more beautiful. And right now, that also means sustainably.” Primack was standing in the middle of a round amphitheater—the likes of which ancient Romans used to work out pressing state issues—a “conversation pit” as it’s affectionately called, designed by real estate firm DDG and made of spruce sourced from one of the globe’s most environmentally responsible factories. Fittingly, it will host the first of Design Miami/’s collaborative efforts with the UN, a series of “Building Legacy Talks.” 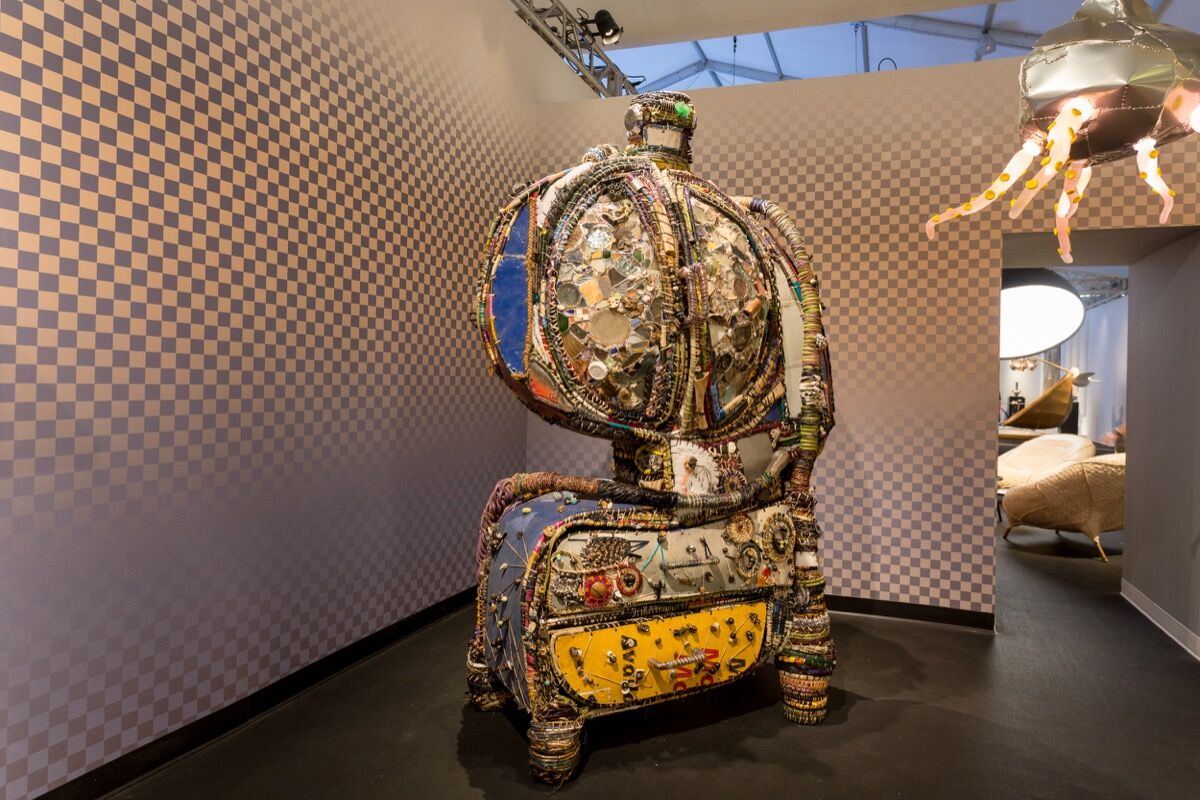 “The goal is to bring the stakeholders of the built environment together to think about what we can do as a community to support sustainable development all over the world,” Primack explained. This turned out to be a theme that seeped into many of the fair’s booths. Installations throughout were forged both from visually stunning design and ideas of sustainability, preservation, heritage, and environmentally conscious innovation.
Upon leaving the amphitheater, I quickly found my way into Friedman Benda’s booth, drawn in by an immense armoire—a kind of reconstituted cabinet of curiosities, whose treasures were woven into its very surface. Gallery representative Erica Boginsky explained that the work’s young designer, New York-based RISD grad
Misha Kahn
, collected its sundry parts (including bits of sea glass, a fragment of a tin can, the back of a cell phone) from the beaches of Rockaway, a shoreline not far from his Brooklyn studio. He then took the materials to Swaziland, where he worked with five local artisans to weave the found debris together into an intricate, spellbinding whole. Embedded into its form is not only a basic process of recycling refuse (the likes of which wash up on beaches and collect in the Great Pacific Garbage Patch), but also the preservation of an age-old Swaziland tradition. Other Design Miami/ attendees were drawn to Kahn’s work too. Both the armoire, and a series of light fixtures that Kahn concocted, were sold by the close of day one. 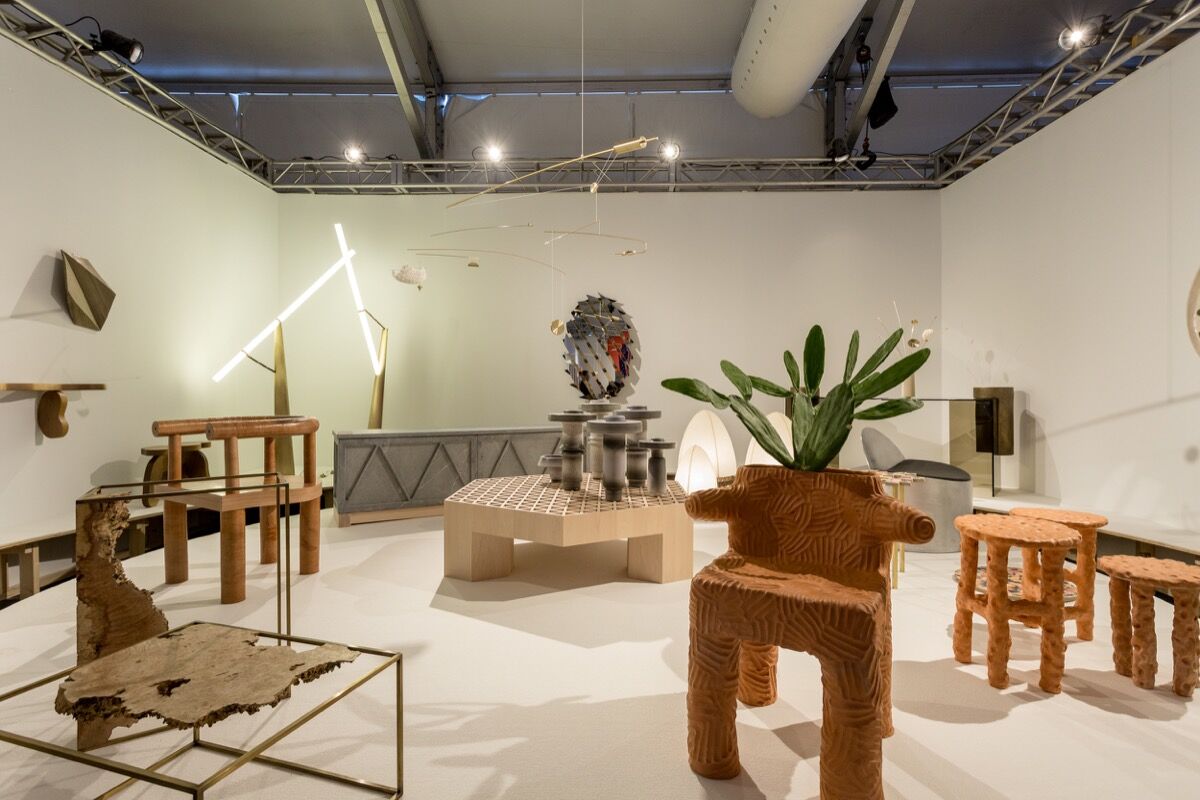 Advertisement
Around the corner, a new, towering lamp, priced at $18,000, by on-the-rise design duo Chen Chen and Kai Williams was a beacon into Patrick Parrish’s elegant booth. While it resembled a radioactive fossil left by the contemporary world, it was made of materials like resin, rope, and brass. Other standout works in the booth, like Fort Standard’s leather chair and soapstone cabinet, use historic and natural materials in new, innovative ways. Primack’s words came to mind as I reached my hand out to touch the smooth, beveled surface of the marble: “As our lives become more and more connected to our phones and technology, we’re starting to look for more and more ways to also connect with the natural world.” That connection can take place, even momentarily, through the objects we live with, and touch, on a daily basis.
Over at Chamber, a first-time exhibitor at the fair, the young Amsterdam-based designer Niek Pulles’s prototypes for chairs (which look like thrones for the king of a future cyborg tribe) command attention. Their hulking, royal blue forms are made from repurposed car seats and styrofoam coated with rubber paint. Copenhagen-based artist
Hilda Hellstrom
’s Diffident Obelisk (Healed Fractures Series) (2015), priced at $4,900, is nestled between the two blue masses. A lovely column made from anthracite and jesmonite, it feels like a shy monument to the fragile Earth that we often forget is beneath our feet. This and another subtle work, too, stayed with me long after I left the fair. Ika Künzel’s delicate glass vessels— priced from $8,000-11,000 and all unique—hold miniature vases, once owned by her grandmother, suspended at their core. “They’re like an invisible forcefield, ensuring the preservation of those artifacts,” gallery director Michael Vince Snyder mused. 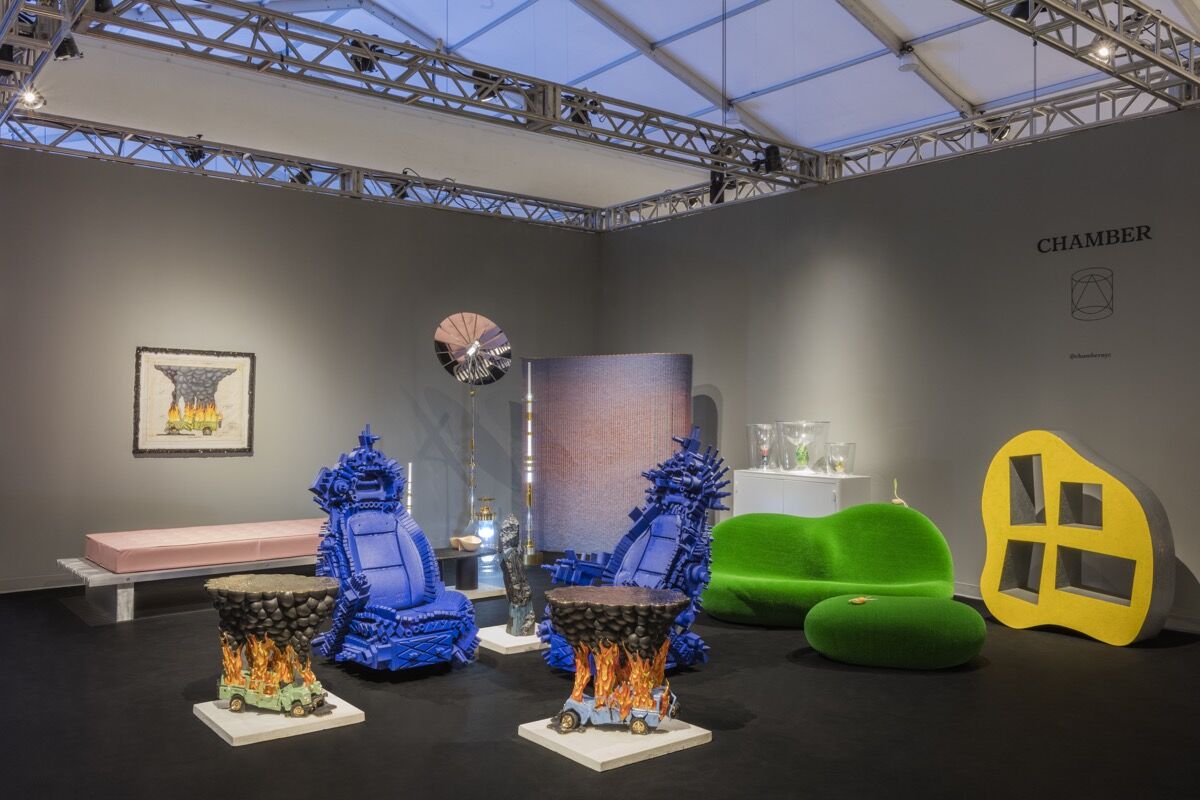 Preservation of a different sort was on display across the the hall, at Mercado Moderno’s booth, where 62-year-old Hugo França was holding court amongst a cohort of substantial, albeit sinuous, wooden chairs and benches. “I find all of the fallen trees close to my home,” explained França of his material of choice. The designer moved to the remote Bahia region in Brazil in the 1980s to be closer to nature. “Most of them are over 1,000 years old,” França added. As of 3 p.m. on the first day of the fair, none of the works had sold, but the gallery reported numerous conversations in the works. The centerpiece of the booth, a sculptural lounge chair pieced together from the massive root debris of a pequi tree, was certainly drawing eyes, and even the occasional caress.
The preservation of the work of great designers—and their grand visions, too—was a powerful theme across the fair. Stunning, museum-quality, early works by the pioneering French designer
Maria Pergay
were arranged across Jousse Enterprise’s sprawling space. Throughout her career, Pergay, who’s now 86-years-old, has transformed stainless steel from an industrial material into icons of modern design. Two of her signature “wave” benches stand guard at the front of the booth, with graceful, low-lying silver chairs, and tables of all shapes and sizes behind them. The rare works are priced between $12,000 and $200,000. 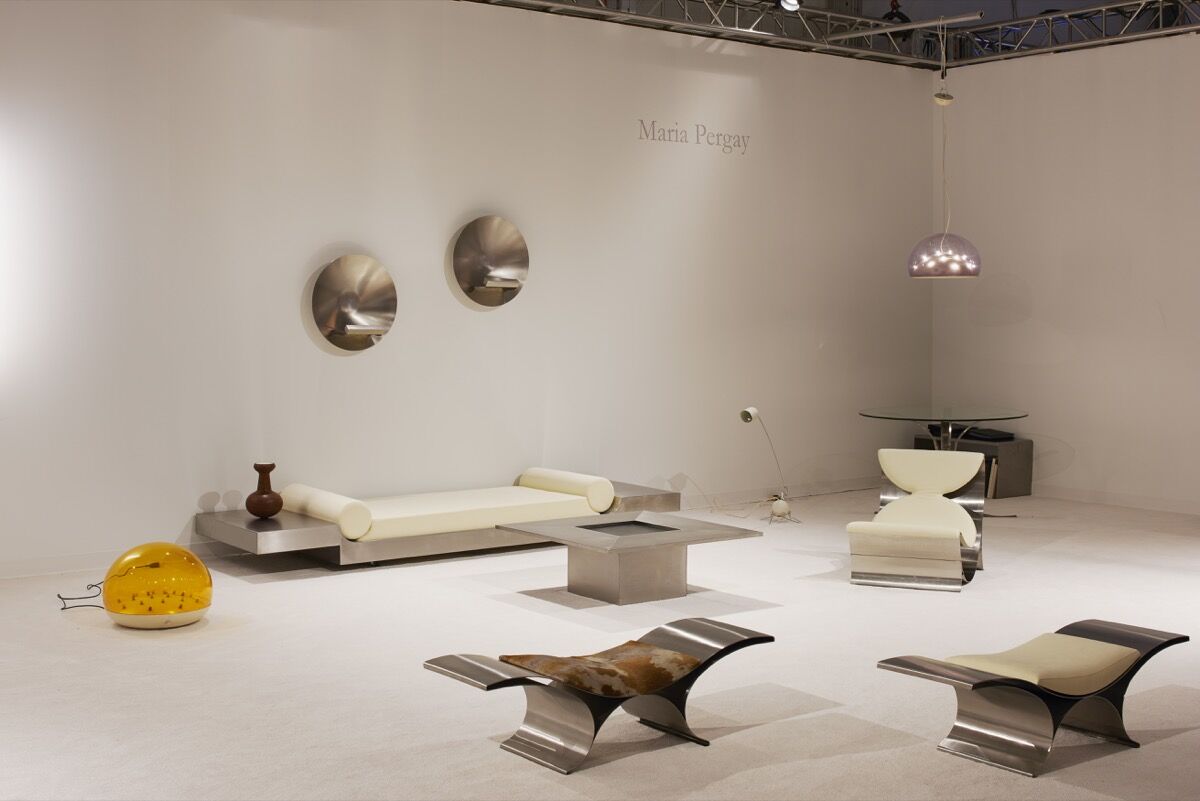 Other historical standouts span the fair. At amman//gallery, these include tapestries by Italian Radical designer Andrea Branzi and Memphis Group trailblazer Ettore Sottsass. Galerie Downtown François Laffanour shows a stunning grouping of the furniture Pierre Jeanneret and
Le Corbusier
designed for the utopic Indian community of Chandigarh. Carpenters Workshop Gallery’s booth features an exquisite couch by the recently deceased
Vladimir Kagan
. And at Jason Jacques Gallery, one finds a mini-retrospective of Beate Khun’s whimsical ceramics.
As I made my way out of the fair, Salon 94’s solo booth of
Gaetano Pesce
’s bold, colorful cabinets and vessels had summoned an excited throng. The cult designer’s new “Tree Vases” were arranged across the floor. Shaped like plants themselves, they protectively housed a mini-stand of palms and rubber plants. A papier-mache tree covered the facade of a tall armoire. And on the other side of the installation, two collectors opened a cabinet and vied playfully for one of Pesce’s bracelets hidden within. The energy in the booth was calm and buoyant, and sales were being made to boot. It was hard not to attribute the positive atmosphere, at least in part, to the vibrant vegetation that sprouted around the feet of collectors, and were celebrated in Pesce’s designs. 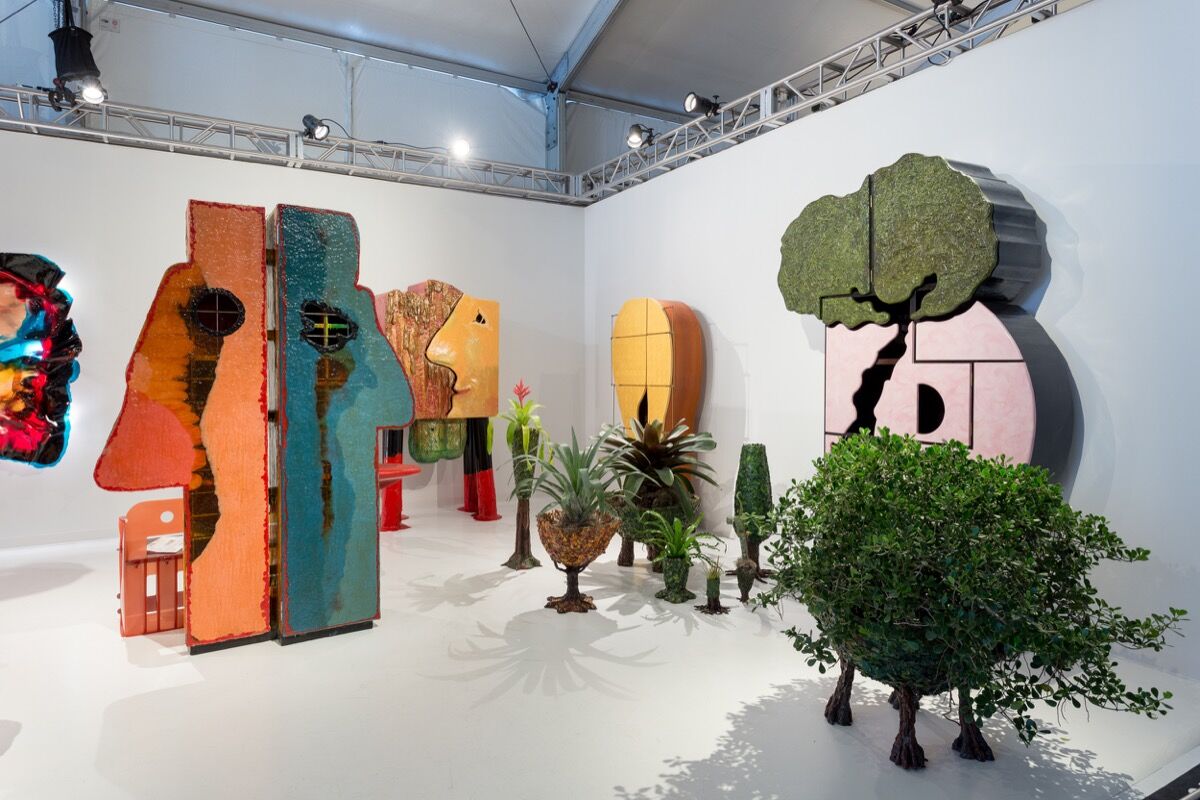 Given the trying year the world has had, as I left the fair, my belief in the power that design and art have to bring people together and inspire conversation—even in small, vase-sized doses—felt renewed. And, in light of ongoing skepticism over the worsening realities of climate change, it’s reassuring to be reminded that members of the creative community are not afraid to address hotly contested global issues like climate change—especially at one of the most prominent U.S. platforms for art and design each year.
Alexxa Gotthardt
Related Stories