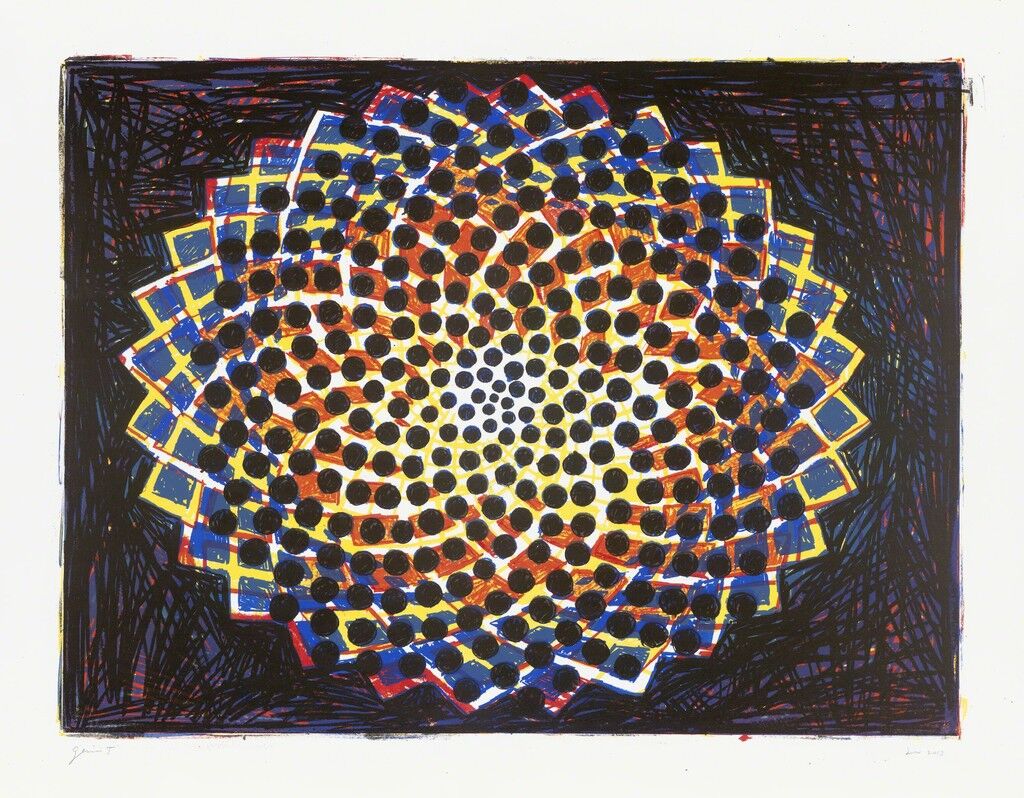 Terry Winters
Clocks and Clouds/5, 2013
Gemini G.E.L.
You’re probably reading these words on an electronic screen controlled by a long strand of ones and zeroes. Your body itself is a strand of As, Ts, Gs, and Cs twisted into a double helix. Like it or not, everything is data now. Scientists have gradually discovered a way of thinking about life, the universe, and everything else: as a complex, mathematical code.
No contemporary artist understands this better than
Terry Winters
. Over the course of his four-decade career—the subject of a retrospective at the Drawing Center in Manhattan, on view through August 12th—Winters has produced paintings, drawings, and prints that mirror advances in science by interpreting reality as an endlessly evolving chunk of data. In his work, mysterious shapes and patterns swirl in and out of focus, prompting a host of different and even opposite interpretations: Organic and artificial, beautiful and chaotic, alluring and sinister. You could say the same about the entire Information Age.
Winters was born in Brooklyn in 1949. Some of his earliest memories involve visits to used bookstores, and it’s telling that, from a young age, he was struck by what he called the “dizzy and dazzling array” of words he found there. His art has been praised for conveying the thrill of being overwhelmed by information—a feeling any book lover knows well—and his interviews abound in allusions to topology, astrophysics, Mexico’s crystal caves, ancient Celtic ruins, and the novels of W.G. Sebald. If Winters isn’t an expert on all these subjects, he’s clearly a devoted amateur who never stops reading and learning. 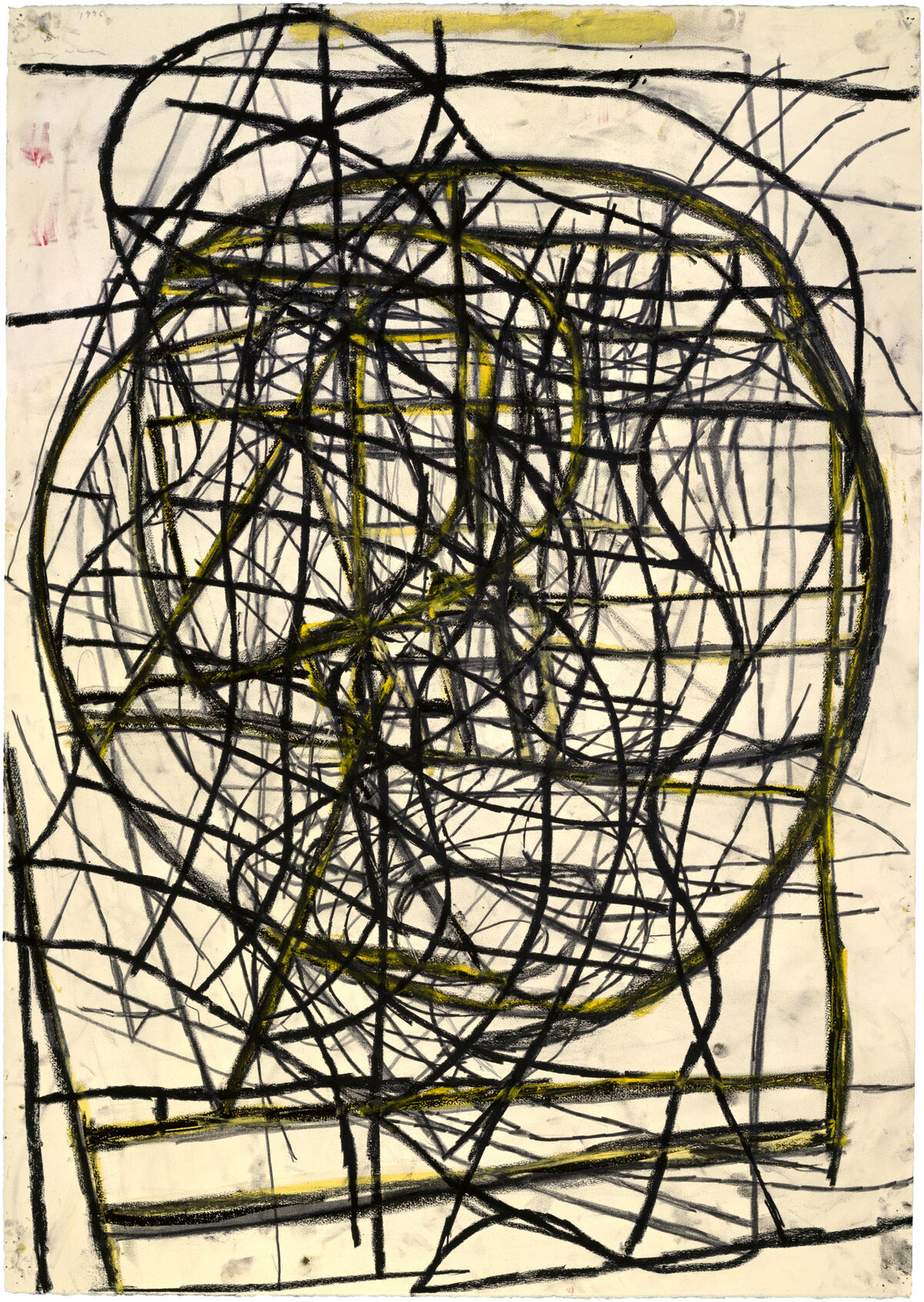 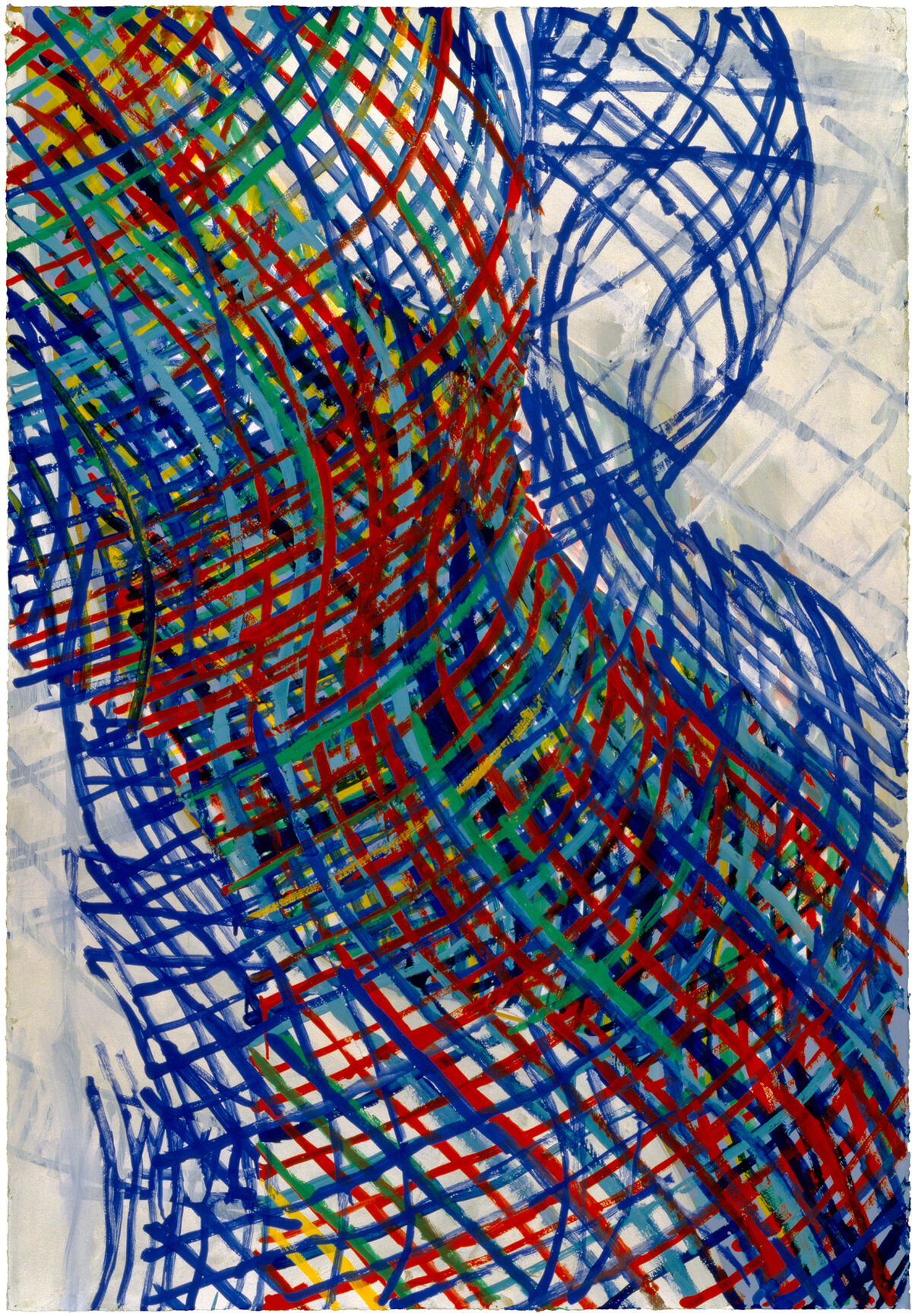 Before finding his signature tone, Winters flirted with a number of different artistic movements. After he graduated from Pratt Institute in 1971, he spent most of his time in New York and New Mexico. During these years, he worked largely in the purified tradition of
Minimalism
, avoiding figurative painting and stylized embellishment. By the late 1970s, Winters had begun experimenting with
Process Art
, a movement stressing that the work of art itself was less important than the act of creating it. The influence of Process Art led Winters to learn how to make his own pigments, and it can still be detected in the way he discusses his work: Recently, he claimed his goal was to show “all the events that went into the making of the painting.”
According to Claire Gilman, Chief Curator at the Drawing Center, Winters “consciously refrained from showing his work in public” throughout his twenties. An introvert in a field dominated by swaggering self-promoters, he didn’t get his own show (at Sonnabend Gallery) until 1982, the same year he turned 33. But perhaps as a result, the first paintings Winters sold in New York seem unusually sophisticated, reflecting a full decade of development after his time at Pratt. Consider the work Double Gravity, completed in 1984, a mere two years after Winters’s debut exhibition. Although Winters had no formal scientific training, he learned an impressive amount about microbiology while learning to make pigments, and many of his paintings and drawings from the ’80s evoke the shapes of cells and germs. Double Gravity makes plain Winters’s scientific interests while also conveying an illusion of depth—showing how far he had strayed from flat, rigid Minimalism since graduation.
Winters continued to take a highly individual, cerebral approach to art-making. While he still looked to microbiology for inspiration, he disliked when critics interpreted his paintings as straightforward depictions of microbes. Partly for this reason, his work from the late ’80s onward tends to be flatter and more plainly mathematical. It would be almost impossible to mistake Animation (1996), one of the many striking charcoal works featured in the Drawing Center retrospective, for a depiction of a cell, or of any particular object—it looks like nothing other than itself. 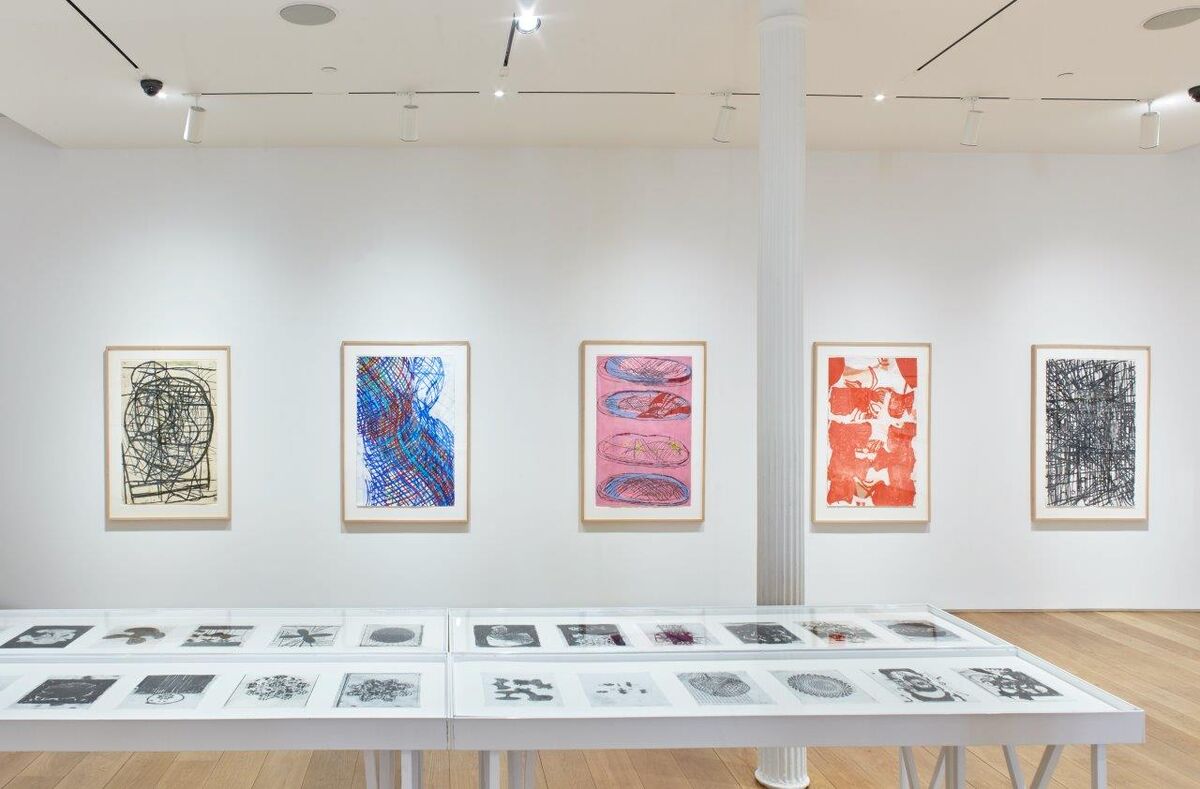 Advertisement
Still, this points to one of the most common questions about Winters’s works: Are they abstract or figurative? In a way, they’re both. If that sounds confusing, look around you. From graffiti on the street to the logo on your business card to the screensaver on your laptop, abstract forms are an unquestioned part of life, as familiar and concrete as any object. Geneticists have even reimagined life itself as a set of interlocking abstract shapes. Abstraction, strange as it sounds, has become a kind of figurative art.
Winters’s paintings jump teasingly back and forth between abstract and figurative forms—part of the joy of viewing them, in fact, stems from being unable to decide which are which. In Untitled I (1999), to name one of many examples, colorful strands almost coalesce into recognizable shapes, only to fall apart once again. “What I’m trying to do,” Winters said in 2008, “is engineer the pictures to the point where those figural components are there, but not quite there. A tension develops between them becoming legible and illegible, or drifting off from one thing to the next. That, for me, is part of what keeps them moving.”
In the mid-1990s, Winters—always shrewd about choosing his materials—began painting with a translucent mixture of oil and alkyd resin. Doing so allowed him to produce bright, dynamic works that communicated some of the enthusiasm he’d felt while creating them—or, as Winters himself put it, the “energy made visible.” 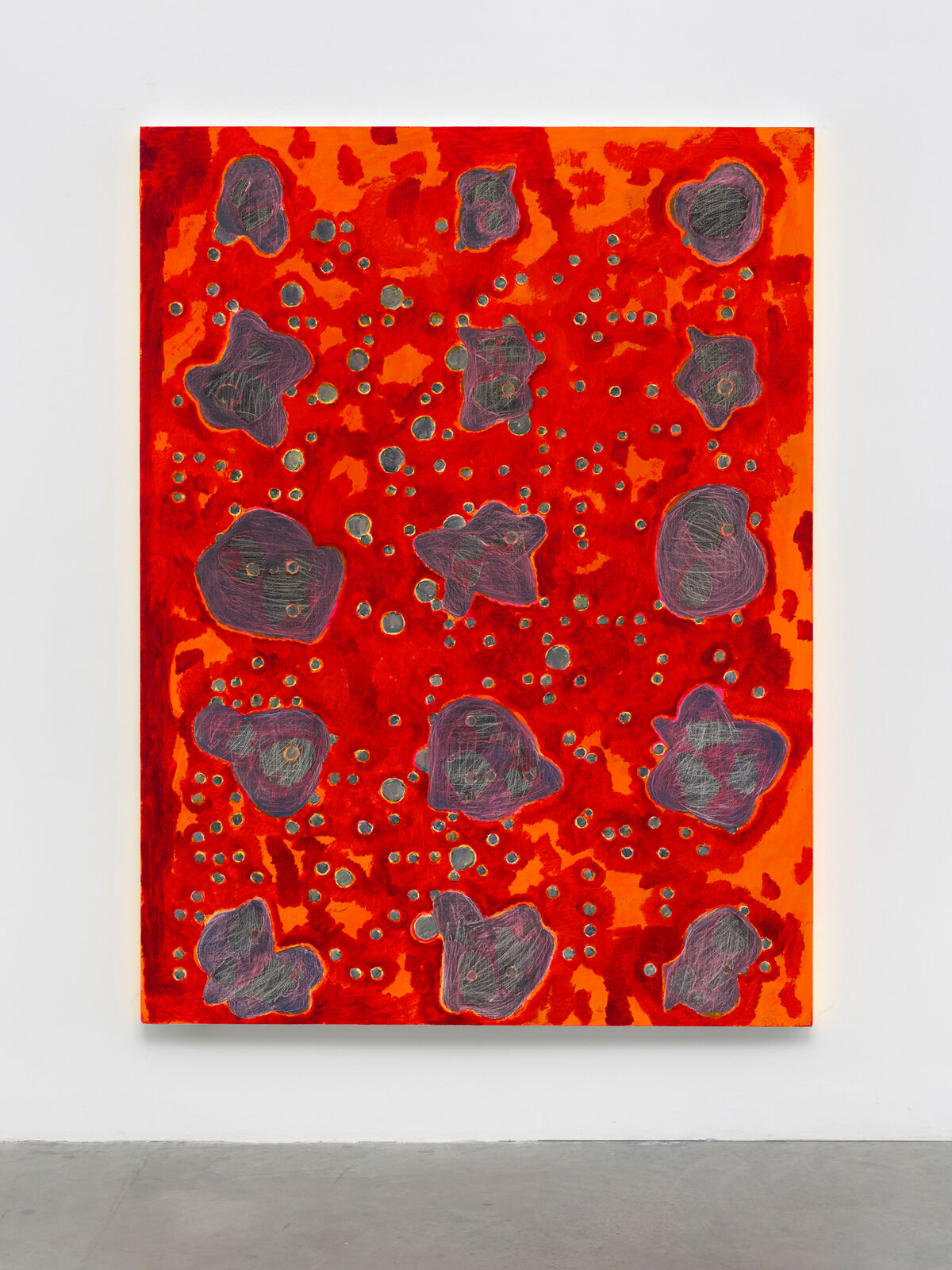 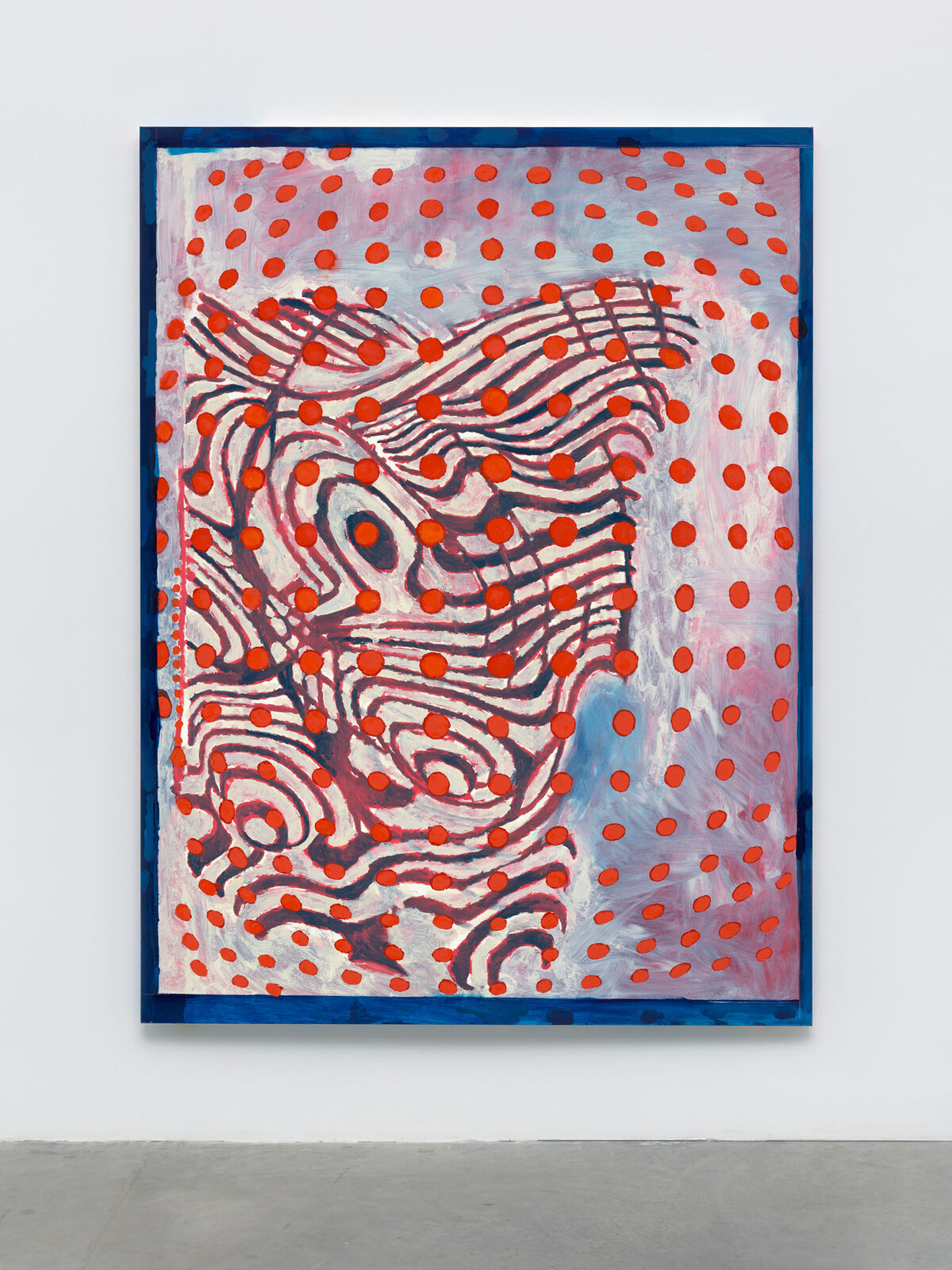 In the last 20 years, much of Winters’s output has been dedicated to that concept of making energy visible. The shapes of computer chips, neural networks, and EKG charts have inspired some of his recent paintings. Winters isn’t exactly trying to depict these things; instead, he riffs loosely on their forms, like a saxophonist playing variations on a melody. “Winters rarely abandons motifs,” Gilman, from the Drawing Center, told Artsy, “but rather adapts and reintegrates them into new compositions, thereby giving them new life.” Echoing the Process Art he studied in the late 1970s, Winters’s works suggest his own struggle to make sense of the unknown—a struggle in which the viewer can’t help but participate.
But the unknown never quite makes sense in his art, no matter how intently the viewer looks. Partly for this reason, Winters’s work has been interpreted as a metaphor for the way in which information is processed in the 21st century. In drawings such as 7-Fold Sequence, One (2008), recognizable patterns don’t proceed as planned: They develop sudden glitches, breaking down into unpredictable, mutant forms. The same goes for the shapes that recur in “12twelvepaintings,” a series Winters completed in 2017. Inspired by a variety of technical illustrations he found on the Internet, Winters invented wild, colorful patterns that took on lives of their own, so that—save for the deadpan titles (Cell, Cobalt, Cinnabar)—it’s almost impossible to tell what their source images depicted.
Isn’t this more or less how data gets passed along in the Information Age? The data in question could be anything—a tweet, a news story on Facebook, a computer virus—but the more it’s circulated, the less familiar it becomes. Whether you welcome or condemn this process, you can’t deny that it’s changed the way we communicate—and, if Terry Winters is any indication, the way we make art. In 2012, when asked about his creative methods, Winters replied, “The challenge is to describe another possible world.” Looking back at the compelling, dizzying work he’s produced since the 1970s, it seems that world might be the one we’re all now living in.
Jackson Arn
Related Stories