Artsy Editors
Jan 22, 2016 4:46pm
Chantal Joffe
’s studio—a long, light-filled space in a canal-side Victorian industrial building in north London—is elegantly disarranged. Books are scattered about on a shabby couch; amateur, anachronistic-seeming photographs are piled high on the table (so rare, now, to see family pictures in print); spreads torn from fashion magazines hang loosely from the wall; paint flecks every surface. Amidst the disorder, leaning up on walls or lying flat on the floor, are the oil paintings and pastel drawings that confirm Joffe’s place among the most acute interpreters of the human (and specifically female) condition.

The American-born British artist has, in the course of a 20-year career, painted women in a startling variety of roles, costumes, and performances. She works predominantly (but not exclusively) from photographs, deriving her inspiration from a wide variety of sources. As a student at the Royal College of Art she harvested images from pornographic magazines, translating their lifeless, de-personalizing male fantasies into curiously life-affirming, affective portraits of women. She continues to use fashion magazines as a database for stylized images of women, as well as her own (what she calls “bad”) photography and family snaps donated to the cause by friends. Her practice, she tells me in a soft, hesitant voice that I must occasionally strain to catch, “shifted more to the known, the real” with the birth of her daughter 12 years ago; Esme has since been the subject of numerous portraits, often depicted beside her mother.
The combination of the real and the fantastic is apparent in her latest show, which goes on display at Victoria Miro’s Mayfair space this week. Among the self-portraits, anonymous models, and family members are several famous faces from the heroic era of postwar poetry. There’s Robert Lowell, looking uncomfortable beside his wife and two children, distracted by something off canvas; there’s Anne Sexton in the famous image that adorns the 1991 Virago edition of her Selected Poems, elbow crooked against her desk and head tilted into left hand, cigarette dangling from her fingers (though in a glorious echo of Matisse, Joffe transformed the study’s wallpaper, soberly mid-century in the original black-and-white photograph, into a dance of red on mustard yellow). 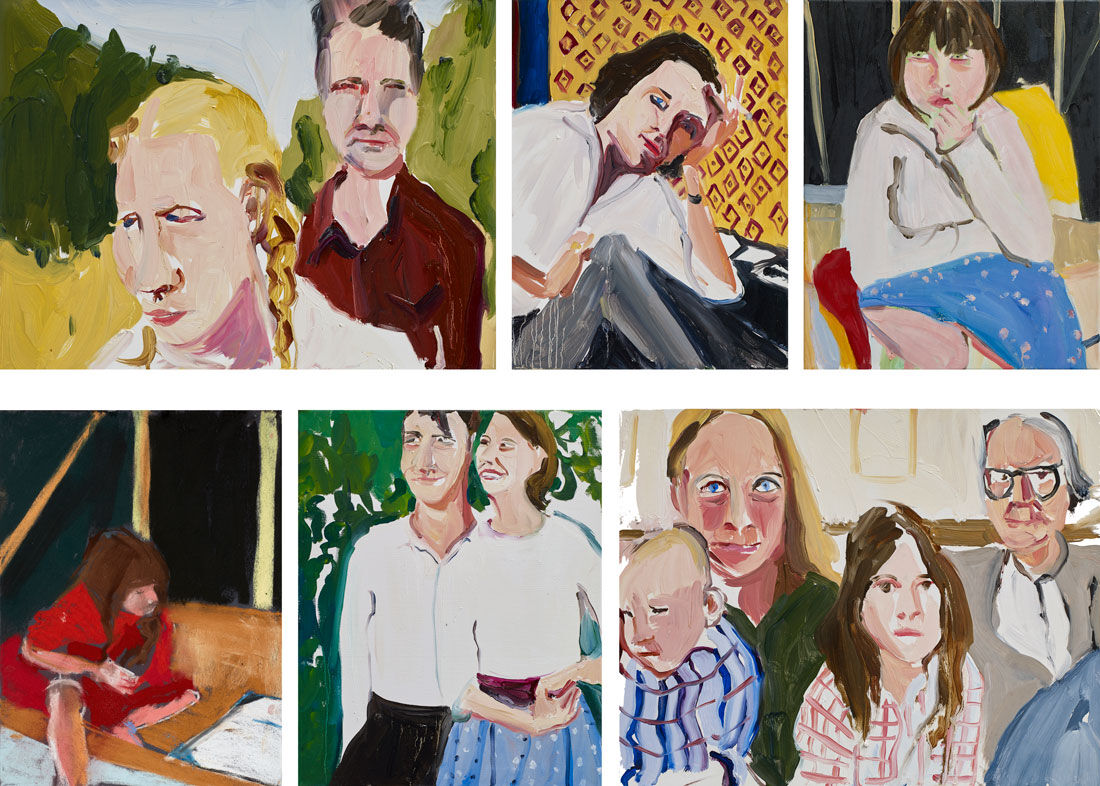 Advertisement
Joffe describes her portraits of the confessional poets as a means of “paying homage” to this group with whom she felt such a close emotional attachment that, she explains, they “began to feel like an extension of my family.” In regard to their writing, and their biographies, she admits to something approaching an obsession, drawn to this bohemian clique who lived so openly, divulging to each other, and to the world, their insecurities, neuroses, passions, and pain. “It’s so romantic, so irresistible in a way,” Joffe says. “They lived their lives almost without account. They didn’t look after themselves, physically or mentally. They weren’t careful. They lived their lives in free-fall.” That sense of abandon clearly appeals to an artist whose portraits are unapologetically honest and yet irresistibly sympathetic.

The extent and long duration of Joffe’s identification with her idols is apparent in a small collage, dating from 1994. Titled Anne Sexton and Me, it depicts the poet’s suicide in her car by carbon monoxide poisoning, her face here substituted for an incongruously cheerful, tightly cropped photograph of the artist herself. In person, the connection between these tragic, famously immoderate poets and the shy, solitary artist who sits with knees clutched up to her chin is hard to fathom. But in her painting, which combines the tight organization of form and color with a thrilling absence of restraint, the influence is unmistakeable. Joffe’s description of their poetry might also faithfully describe her own painting: “Pure expressionism doesn’t work ... it is just a vomiting out of crap. There has to be structure, control, intention.” In Joffe’s best work, her quick, expressive handling of flesh tones balances with perfectly weighted stripes, lines, patterns, and clever framing devices. 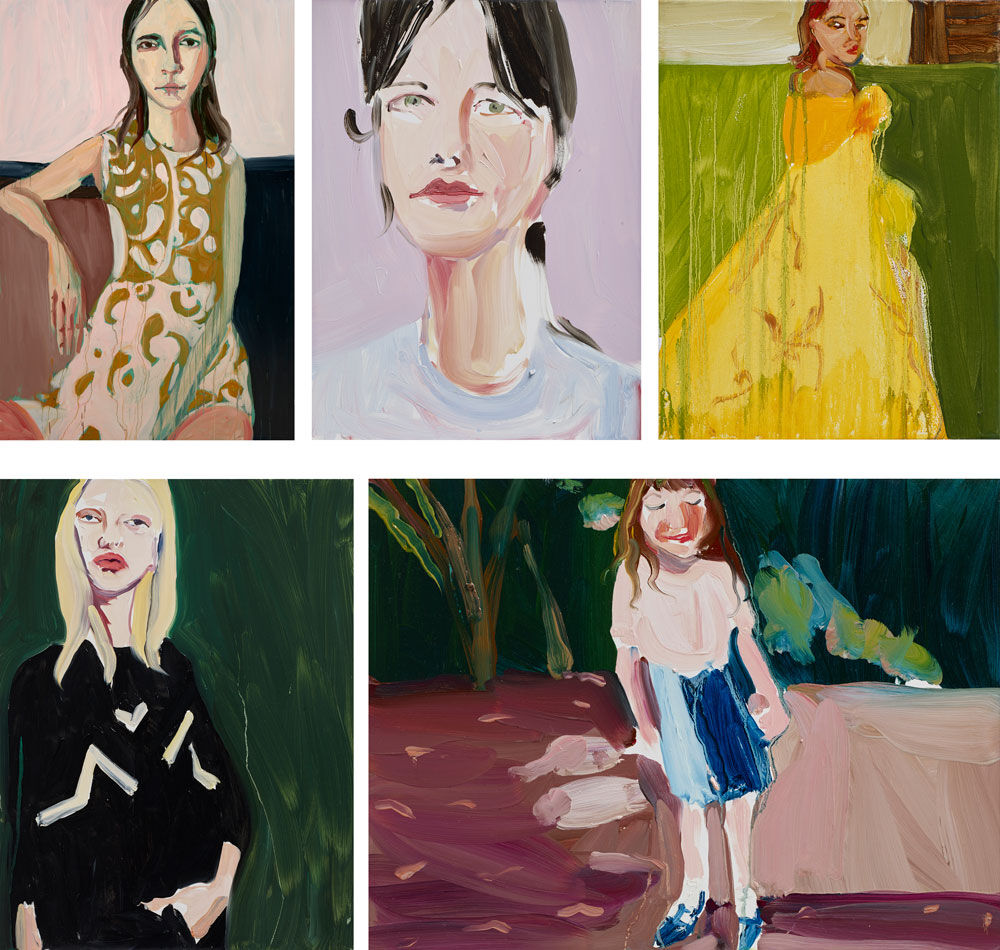 Indeed, while it’s tempting to apply psychoanalytical or political readings to Joffe’s patching of her adolescent heroes into the fabric of her life (as monuments to the formative role that both art and celebrity play in our personal development, perhaps), or to walk around the gallery spotting Sylvia Plath and Ted Hughes, it is in their influence on the artist’s approach that we should recognize them. The confessional poets were preoccupied, as the name suggests, with the possibility of faithful self-expression. The strategies that they adopted in pursuit of this goal varied enormously, from Elizabeth Bishop’s tightly locked lines, to Plath’s provocative howls of fear and corrupted desire, and Sexton’s frightening directness. But as art, its vitality was predicated on its honest attempt to draw upon and articulate the author’s own felt experience.
“That’s the thing about painting,” Joffe explains. “Everybody knows the difference between a painting that feels real and one that feels artificial or fake.... Everybody knows what’s really good, but most people are afraid to say what’s bad.” Painting and poetry can be “miraculous,” she says, addressing that mysterious property that transforms technical competency into emotional effect. That “miraculous” element is difficult to identify, but the best of Joffe’s paintings have it.