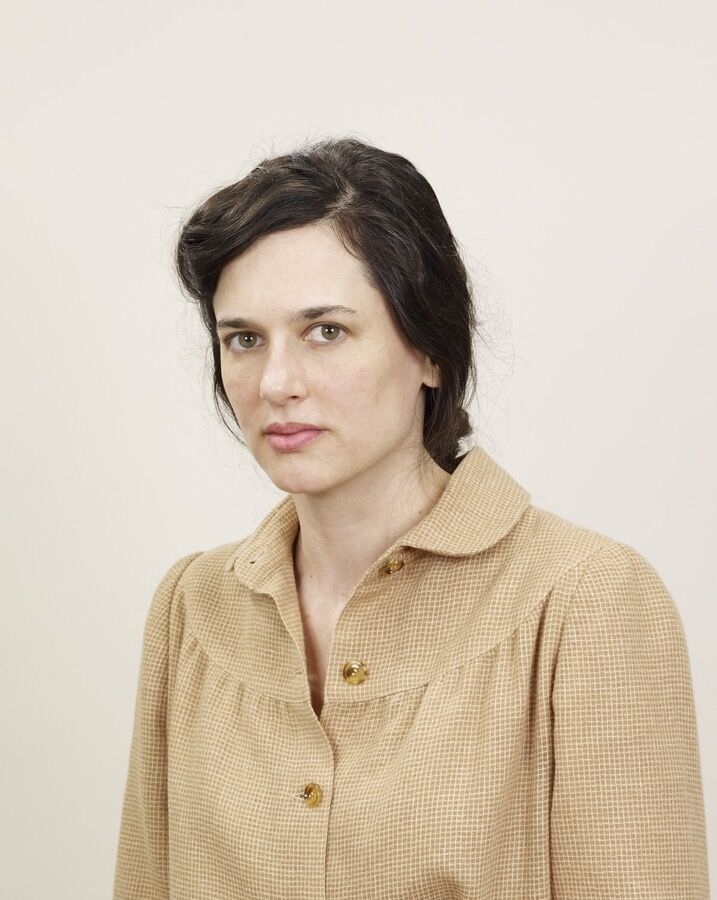 It’s President’s Day, and artist
Taryn Simon
strolls through Gagosian Gallery’s 24th Street space in Chelsea, adding the finishing touches to her latest exhibition. “I guess it’s an appropriate day for this,” she muses, surveying the scene. Large, technicolored photographs of flowers—from flamboyant sprays of gladioli to awkward piles of carnations—line the walls. They’re not works you’d expect from an exhibition titled “Paperwork and the Will of Capital,” but expectations quickly dissolve upon learning the backstory. “I came upon a photograph of the Munich Conference where Mussolini and Hitler were surrounding a bouquet; I was struck by it,” Simon recalls. “I started thinking about the flowers listening to what was going on in the room, observing these masters of the universe trying to control the evolution of the world.” Intrigued, Simon set out to find the flowers that had witnessed some of international politics’ most pivotal—and, as it’s turned out, futile—agreements.
Across Gagosian’s massive space, Simon gives us a mesmerizing taxonomy of such bouquets. In 1994, a mountain of pink stargazer lilies was present when a quartet of world leaders—Russia’s Boris Yeltsin, Ukraine’s Leonid Kuchma, the U.K.’s John Major, and the U.S.’s Bill Clinton—agreed to transfer Ukraine’s cache of nuclear weapons to Russia in exchange for security assurances. Twenty years later, Russia invaded Ukraine, blatantly ignoring the treaty. In 2000, a bucket of palm fronds bore witness to a handshake between Cuban president Fidel Castro and Venezuelan president Hugo Chávez, cementing the trade of Venezuelan oil for Cubans working in medicine, agriculture, and other technical professions. Since then, hundreds of Cubans sent to work in Venezuela have appealed for political asylum. Simon put it succinctly: “They were trading human beings for oil; it’s human capital.”
Summaries of these failed agreements and their attendant flowers—which Simon (with the help of a botanist) painstakingly identified, sourced from Holland, arranged, then photographed—proliferate across the gallery’s walls. They come together as an enthralling, albeit unnerving investigation of what Simon refers to as “the stagecraft of power.” “How can you not think about it right now; all of the presentation and the attention to presentation that goes on in politics,” she reflects. “Beneath the surface, who knows what’s there? It doesn’t even seem to matter anymore.” In the rooms where bargains between world leaders are struck—amidst freshly starched suits, billowing flags, and cascading plants—the pomp of politics can be convincing, even blinding. “Here, I’m sort of distilling all of that political theatre to just its aesthetic qualities, using the color fields and the decorative elements to represent a much larger parade,” she explains. 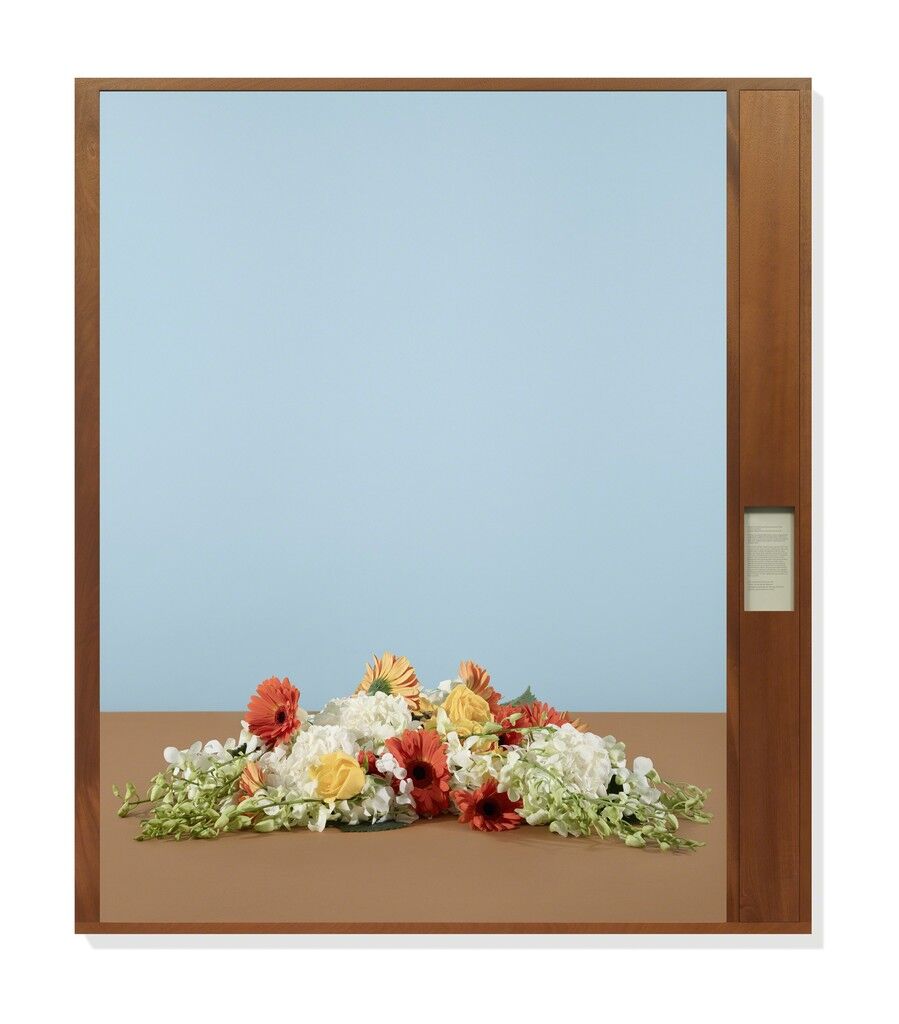 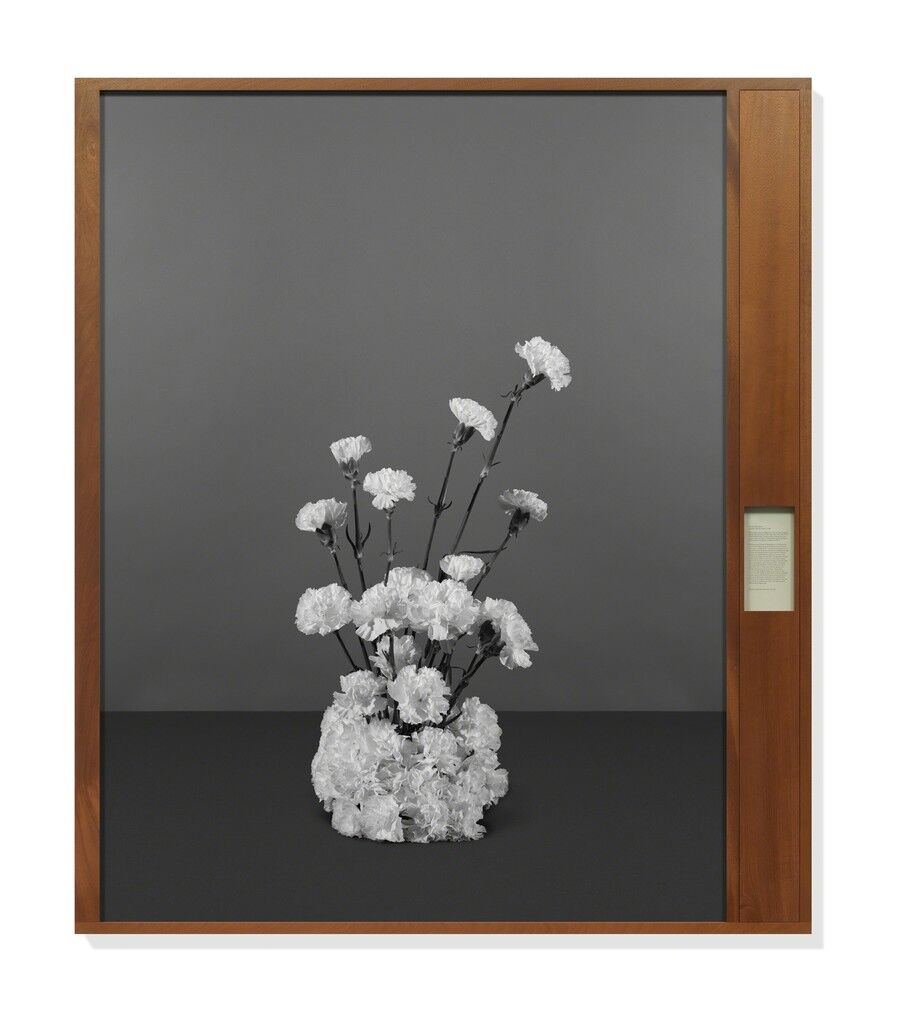 Taryn Simon
Bratislava Declaration, Bratislava, Slovakia, August 3, 1968, Paperwork and the Will of Capital, 2015, 2015
Gagosian Gallery
Since 2002, when Simon debuted “The Innocents”—a research-intensive exploration of wrongful convictions in the U.S.—she has proved herself a master at siphoning weighty political and social quandaries into serial artworks. Other projects have catalogued the cultural influence of the James Bond franchise or amassed a photographic archive of objects seized from people and packages entering the U.S. For this project, flowers are the alluring proxies for political theater—and the flower market itself is a stand-in for the complexities of globalization and capitalism.
To recreate the ceremonial arrangements, Simon ordered some 4,000 flowers from a single source—Holland’s Aalsmeer Flower Auction, which is, as she points out, “the epicenter of the global flower market.” In a typical globalized trade loop, flowers are grown in countries around the world, shipped to and aggregated at Aalsmeer, then shipped again to their final destinations. Bouquets that gather blooms from Ecuador, Thailand, and the Netherlands end up in bodegas, or on the desks of politicians, the world over. For us, these medleys are the norm—but it hasn’t always been that way. Dubbed “impossible bouquets” and traced back to Dutch 17th-century painters, clusters of exotic flowers were the stuff of  these artists’ dreams—and the subject of sought-after still lifes that would go on to establish the beginnings of the art market.
Simon made the cogent, time- and space-collapsing connection between the “impossible bouquet” and the pageantry of political gatherings, where sundry leaders and their motives are brought together and packaged in pretty flowers and fragile paperwork. Significantly, all of the floral arrangements view at Gagosian also represent impossible bouquets, “flowers that could never grow together, in nature, in the same place and at the same time,” Simon explains. “Or in my interpretation, that could never be grown in the place of the meeting, at the time of the meeting.”
She gestures towards a photo of a tangled mass of green leaves (a golden pothos plant grown in the U.S.) that sat in the room where, in Cairo in 2010, numerous countries gathered to draft an agreement requesting the return of cultural treasures that had been taken by colonial powers. Notably, “the U.K., France, Germany, and other countries holding most of the contested artifacts did not attend the conference,” Simon’s text accompanying the photo explains. “It’s like a Gordian knot,” she reflects, gazing at the plant. “In the context of that agreement, it feels like some strange poem to this idea of cultural heritage and what power does to one’s cultural heritage.” 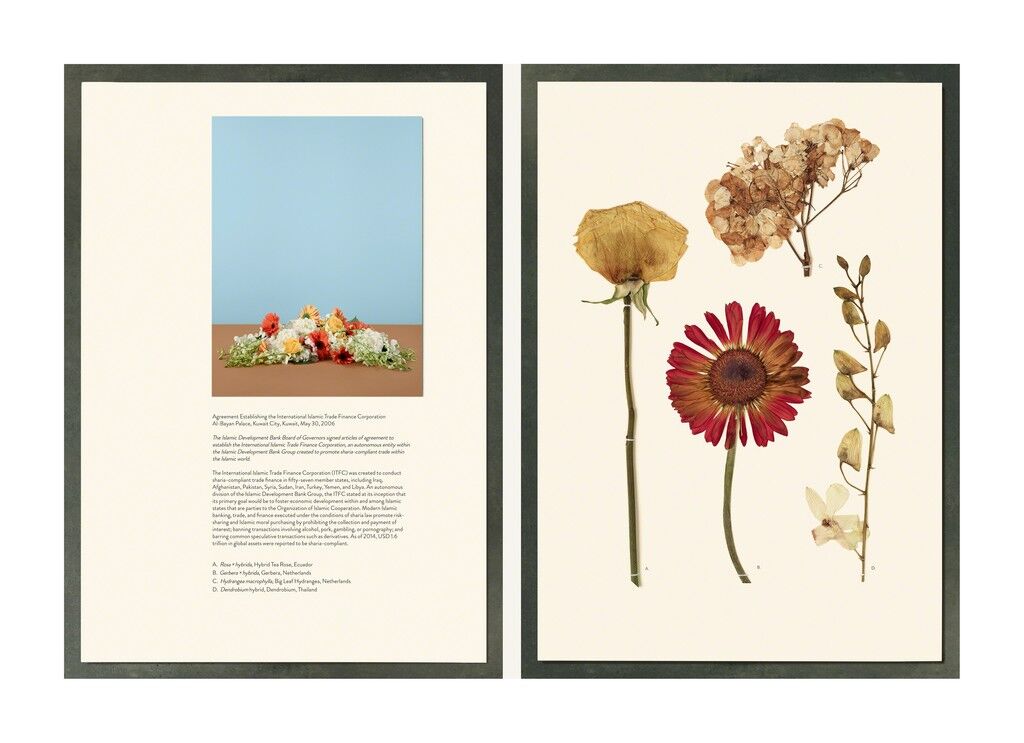 Taryn Simon
Bird’s-eye view, Agreement Establishing the International Islamic Trade Finance Corporation Al-Bayan Palace, Kuwait City, Kuwait, May 30, 2006; Rosa × hybrida, Hybrid Tea Rose, Ecuador; Gerbera × hybrida, Gerbera, Netherlands; Hydrangea macrophylla, Big Leaf Hydrangea, Netherlands; Dendrobium hybrid, Dendrobium, Thailand, Paperwork and the Will of Capital, 2015, 2015
Gagosian Gallery
Advertisement
Simon’s metaphor could be applied to the the entirety of “Paperwork and the Will of Capital,” which opens tonight. While her photographs take center stage, perhaps the most poetic works in the show are sculptures—heavy black columns that seem to stand guard on the floor of the main gallery. Each is topped with delicate pieces of paper that host pressed flowers—artifacts of each bouquet that Simon recreated. The columns, it turns out, double as elaborate flower presses. “Here, you have the representation of the real, pressing up against the real itself in a race against time,” Simon explains.  “Who knows how long the English language or the photographs themselves will last, but we know herbarium specimens have been found in the ancient Egyptian tombs, and they’ve lasted 3,000 years.”
We look at a page cataloguing a poppy from Italy, a snapdragon from Spain, and baby’s breath from Kenya. In 2013, these three species were united to witness an agreement between the U.S. and Switzerland, requiring that the European country send the names of all Americans with Swiss bank accounts to the IRS—a measure taken to combat tax evasion. Since then, many Swiss-American dual citizens affected by the decision have renounced their U.S. citizenship. As time passes and the repercussions of such agreements are revealed, Simon’s pressed flowers fade in step. But there is also the sense that all isn’t lost. “Aging also implies notions of survival,” Simon reflects. Indeed, as she walks out of the gallery, her sculptures feel less like memorials and more like vaults, preserving history’s mistakes with an eye to learning from them.
Alexxa Gotthardt
“Paperwork and the Will of Capital” is on view at Gagosian Gallery, New York, Feb. 18–Mar. 26, 2016.
Related Stories