As Tech-Fueled Capitalism Accelerates, a New Exhibition Asks What’s Next Still of video by Socialist Core Values. Courtesy of the artist and Long March Project.

Is the only response to technology-fueled global capitalism to lean into it, to accelerate the depletion of the world’s resources until a radical alternative becomes not only possible, but inevitable? Such is a narrative suggested by controversial British thinker Nick Land, who, since the 1990s, has been central in popularizing the strand of philosophy called “accelerationism.” His ideas now sit at the core of a group show, “Special Economic Zone,” which opened last month at Long March Space in Beijing.
“Special Economic Zone” is the third in a series of exhibitions launched in 2006 and called “Building Code Violations,” which has looked at how the rapid economic expansion and social change that China has undergone in recent decades has shaped the “political, social, economic and cultural realities of today.” It’s part of the gallery’s Long March Project, a curatorial initiative conceived in 1999 (three years before the gallery itself opened) that aims to bundle alternative programs such as walks, discussions, and writing groups alongside traditional exhibitions. 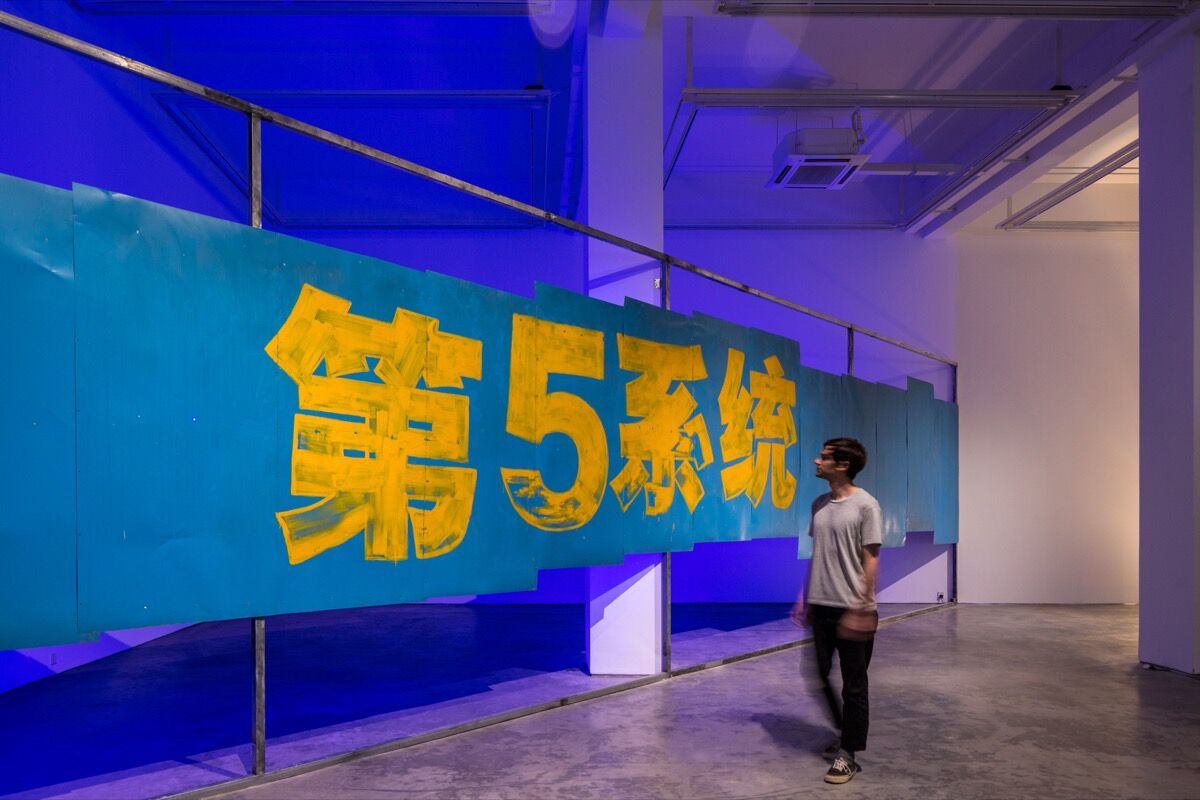 The exhibition’s title references Deng Xiaoping’s program of reform and opening up that launched in 1979, particularly the case of Shenzhen, which transformed from a fishing village into an economic powerhouse in a matter of decades. Shenzhen’s dramatic rise upon receiving Special Economic Zone (SEZ) status, which provides financial and trade incentives to foreign investors, is sometimes seen as a case study in accelerationism, a unique pilot program by which China’s planned economy began integrating into the global capitalist system with astonishing results.
In Shenzhen, a city famous for industrial rather than artistic capacity, this process of economic opening sometimes led to tensions between artists and developers, a dynamic that is palpable in
Yan Lei
’s The Fifth System (2003-2007), a hanging sheet of construction material that the artist originally constructed for a 2003 exhibition in the city. In the piece, the Shenzhen exhibition’s title (“The Fifth System: Public Art in the Age of Post- Planning”) is painted in bold yellow characters on blue construction material emblematic of the cycles of demolition and rebuilding that have been a constant feature of China’s megacities as they’ve expanded.
When it was first installed, Yan’s intervention effectively walled off a small parcel of lucrative real estate in Shenzhen’s commercial and tourist zone known as Overseas China Town, preventing it from being developed for the two-year run of the exhibition. In the Long March installation, it hangs across a large corner of the white cube as both a protest against the speed of commercialization and a commodity absorbed by the very system it was built to critique. 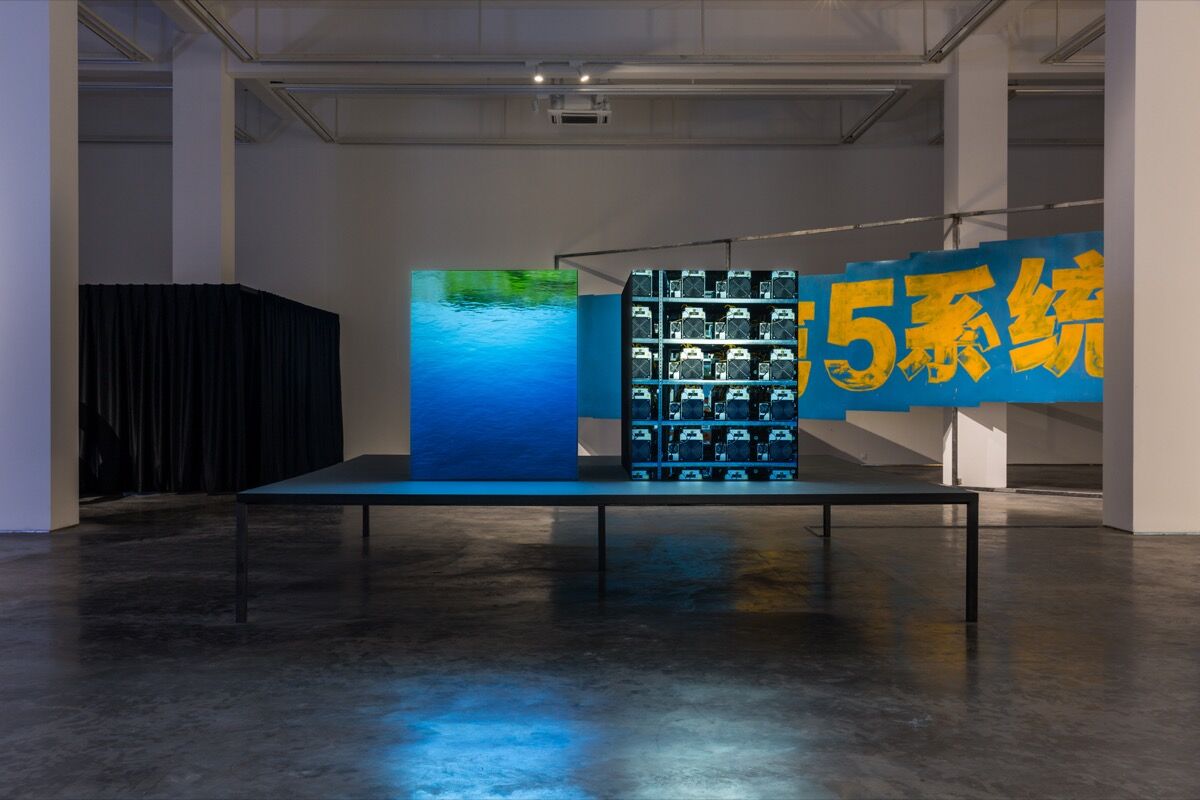 Advertisement
Elsewhere, “Special Economic Zone” pays more attention to the of-the-moment technologies that are contributing to Land’s theory, from AI to robotics to blockchain. Take, for example,
John Gerrard
’s Stream (Sichuan) 2018 (2018), which presents parallel animations screened on adjacent cubes. One pans endlessly over racks on racks of Bitcoin-mining servers (it’s modeled on a real mining farm the artist visited in Sichuan); the other depicts a flowing stream of water, an allusion to the vast quantities of natural resources required to create cryptocurrencies. (One estimate put the electricity consumption of Bitcoin mining operations worldwide to be roughly comparable to that of Ireland.)
Nearby, a work by the fashion collective SCV spotlights the unique intertwining of socialism and consumerism brought on by China’s dramatic economic expansion. The anonymous group’s name refers to Socialist Core Values, a set of 12 national values including “harmony” and “democracy” that were officially enshrined into the doctrine of China’s Communist Party in 2012.
At Long March Space, SCV presents an animation and a collection of its clothing designs, which appropriate verbiage and iconography from these socialist values, incorporating them into trendy streetwear. Pieces from the collection were on offer at a pop-up shop at an edgy fashion boutique in Shanghai last month, and can be purchased for between $15 (for a pair of crew socks emblazoned with the characters for “prosperity” and “rule of law”) and $60 (for a “China Dream” T-shirt, which rips its graphic from the propaganda mascot that accompanies banners touting the “Chinese Dream” slogan adopted by the Communist party in 2012). 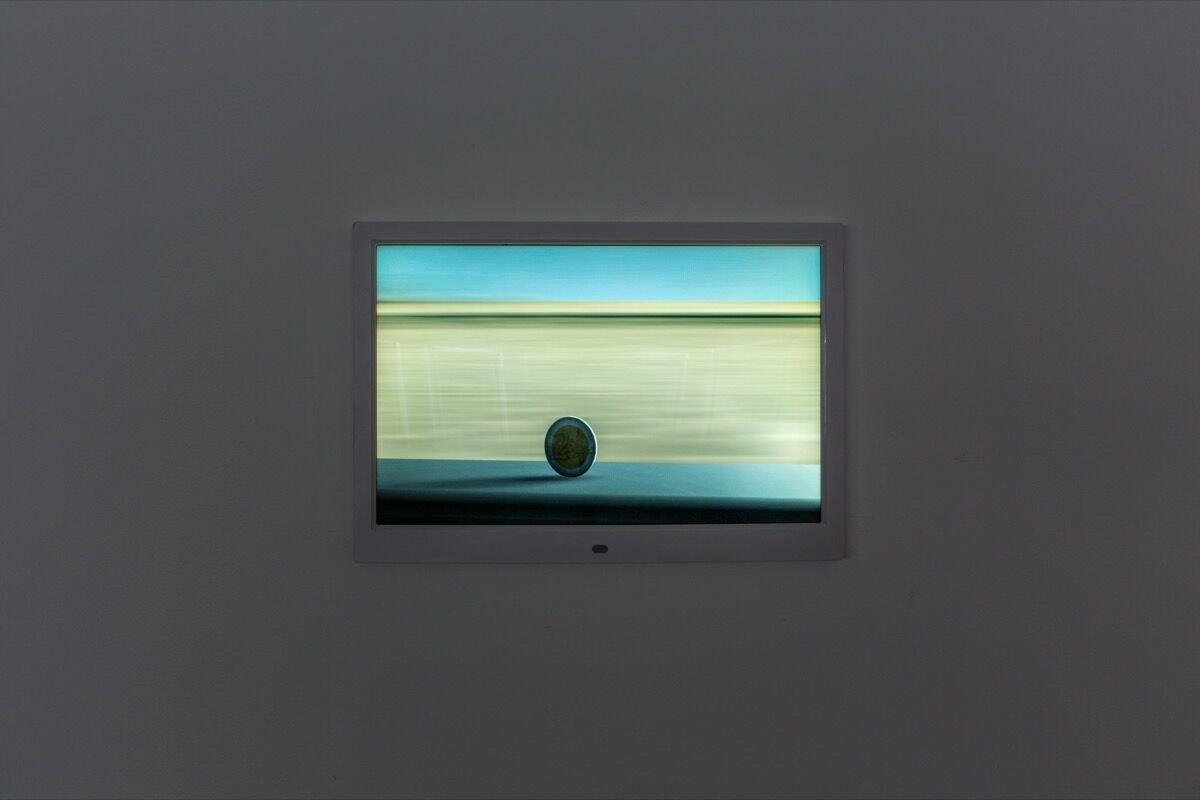 Detail of Ho Rui An, Asia the Unmiraculous Series, 2018. Photo by ARTEXB. Courtesy of the artist and Long March Project.

A more literal reference to acceleration is made by
Ho Rui An
’s Asia the Unmiraculous. The work references the viral video entitled “Coin Test China High Speed Rail,” in which a €2 coin is balanced on the ledge of a Chinese bullet train as the landscape whips past in the background at speeds of up to 350 kilometers per hour. Ho also contributed a series of short essays to the exhibition, which contrast Western stereotypes and fears of an economically rising Asia with the facts on the ground. Ho’s work serves as an apt stand-in for the exhibition as a whole, which juxtaposes those feelings in the West with the optimistic tone of Chinese businessmen and politicians, who believe that all of this acceleration is sustainable (one text produced by the Long March Project for the show calls out such talk as “science fiction propaganda”).
For the Chinese Communist Party, the 40th anniversary of reform and opening up has been a cause to celebrate the Chinese economic miracle pushed forward by cities like Shenzhen. For the curators and artists gathered by “Special Economic Zone,” however, Shenzhen is not a unique model of Chinese exceptionalism, but rather a harbinger of a rapidly approaching and uncertain future.
Whether it’s the immense amount of energy consumed by cryptocurrency creation, the marketization of “socialist core values,” or the fetishization of stability in the face of unprecedented change, each piece in the exhibition furthers the idea that the speed at which technology and capitalism circle the globe today locks humanity into new cycles of creative destruction, just as quickly as it emancipates us from the old ones.
Josh Feola
Related Stories