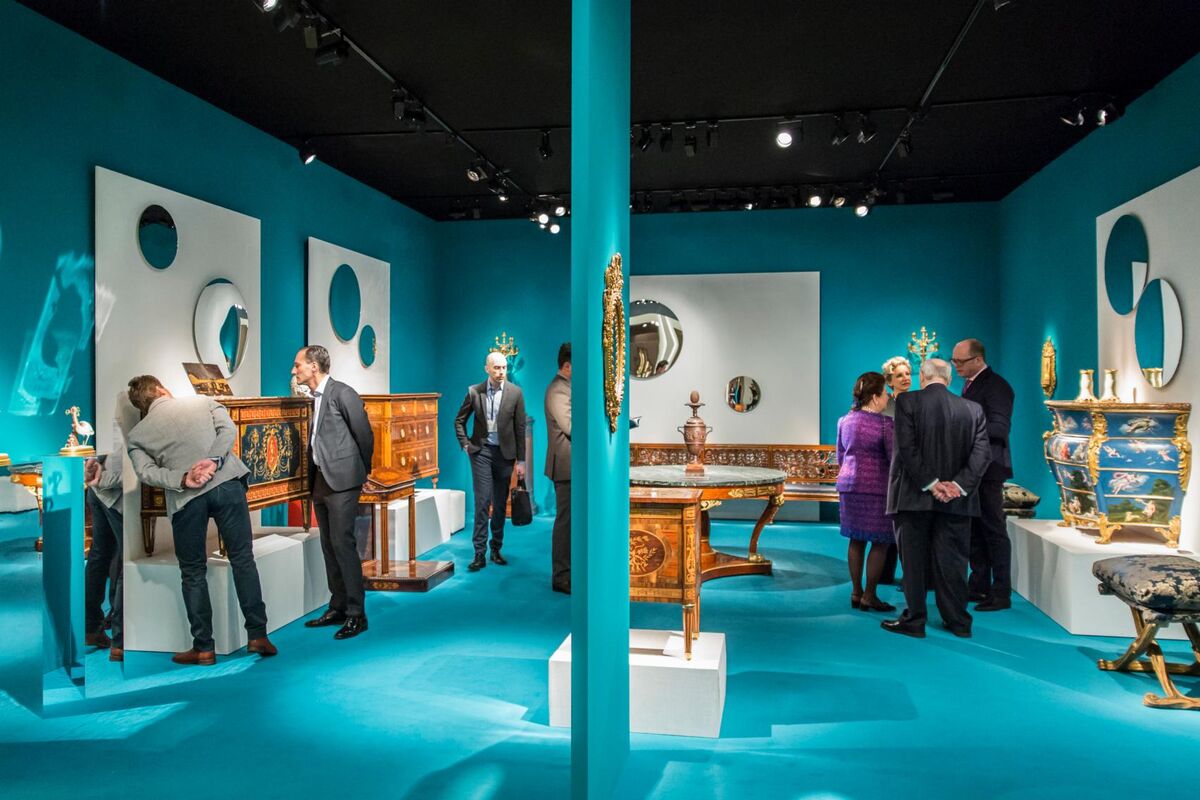 TEFAF (The European Fine Art Fair) Maastricht opened the doors to its 31st edition on Thursday morning with 275 dealers hailing from some 20 countries. An elegant, eager crowd spilled into the lofty halls of the city’s convention center during the preview, feasting their eyes on art, antiques, fine jewelry, and antiquities.
The venue was bedecked with customary fanfare—including a stately illuminated entryway and floating topiaries of tiny glass vases of roses (both the work of the fair’s much-lauded designer Tom Postma)—and inside, fairgoers devoured luxe hors d’oeuvres, including dainty tartlets and freshly shucked oysters.
During the preview, six- and seven-figure sales came in at a moderate pace, with dealers reporting that the strength of the fair matched previous editions and that this year included a more geographically diverse clientele—perhaps thanks to the growing visibility of TEFAF New York and the newly expanded two-day VIP preview period, which allowed dealers to transact at a more relaxed clip and, at times, with collectors they had not met before. 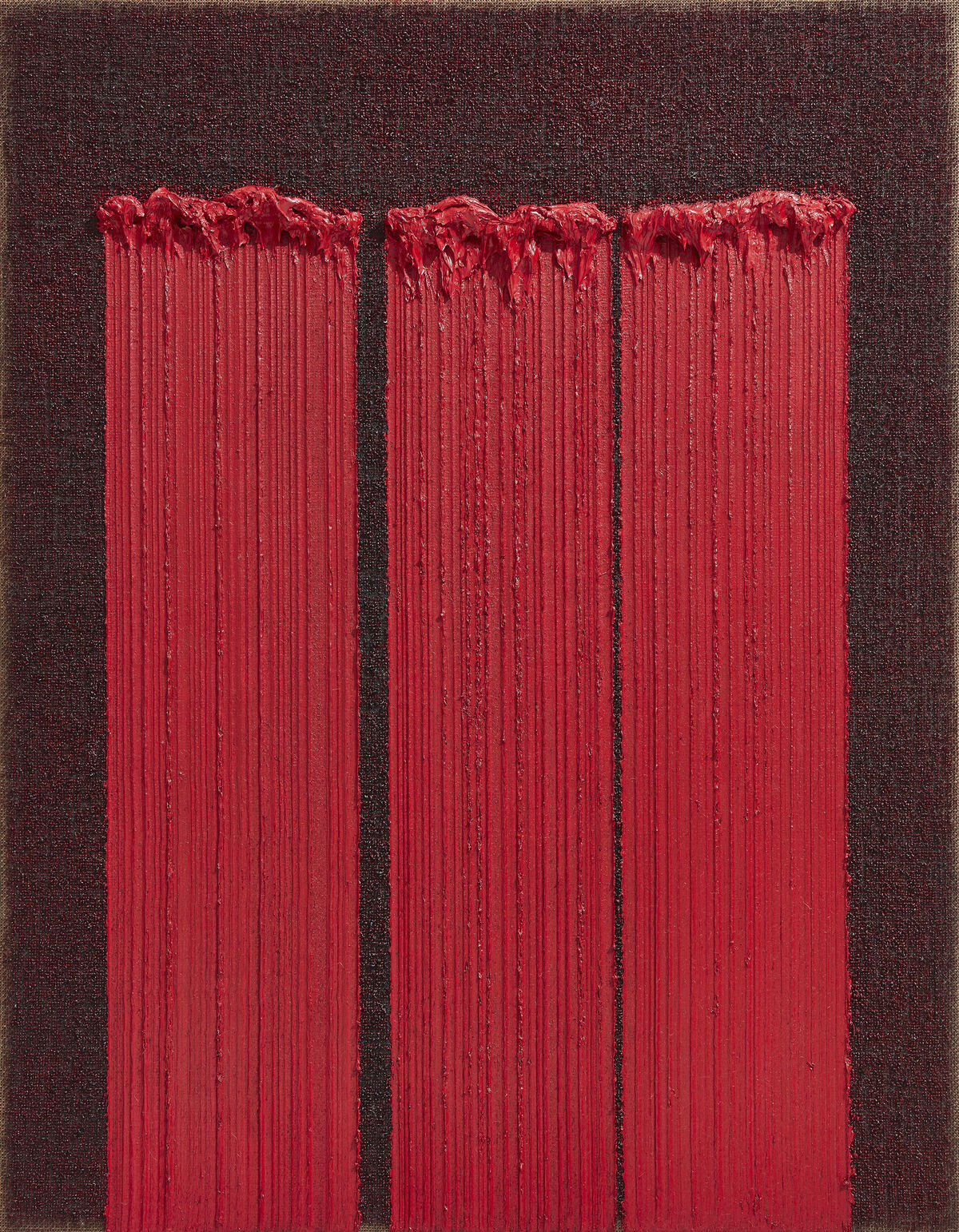 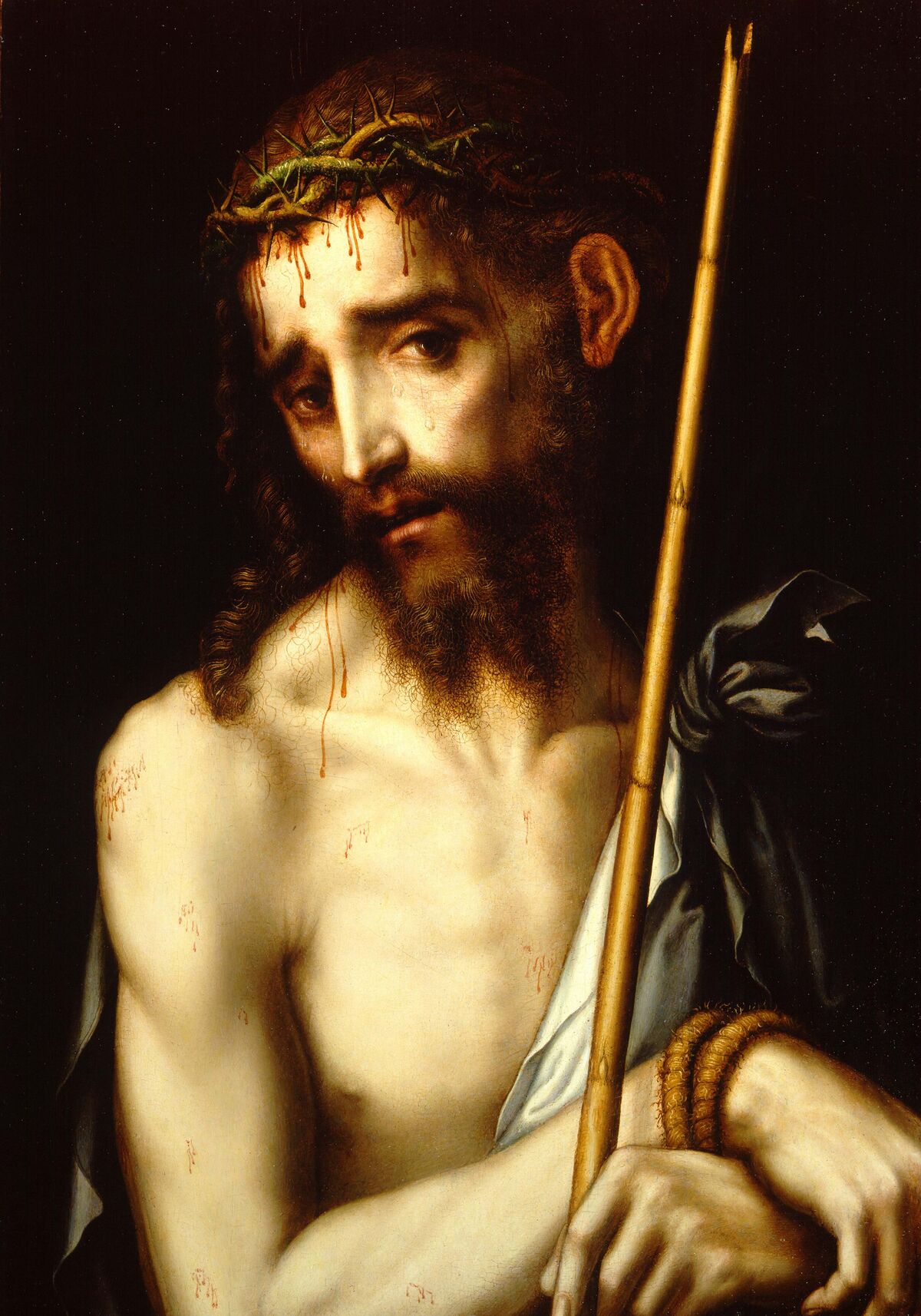 On day one, multiple galleries notched seven figures sales. The London, New York, and Madrid-based Colnaghi sold a
Luis de Morales
painting, Christ the Man of Sorrows (c. 1520-86), to an American institution for €1.2 million; and
Bartolomé Esteban Murillo
’s 17th-century painting La Dolorosa for an undisclosed seven-figure sum to a private European collector; they also had two sales in the six-figure range, including a
Roman
mid-1st-century marble bust of a woman for €700,000.
In the next stand over, Leeds and London-based Tomasso Brothers also had a solid first day with their booth devoted to Rome—complete with faux-mosaic floors and custom lavender fresco-inspired wallpaper. They sold a pair of monumental marble lion sculptures (one lion is depicted attacking a horse, the other a bull) attributed to
Giovanni Battista Foggini
and his workshop, for €1.75 million. They also sold a large 1783 oil painting by
Giovanni Battista Cipriani
for around €425,000 in the early hours of the fair.
London’s M&L Fine Art, showing for the first time this year, sold two prominent works from its
Arte Povera
presentation, including a fine
Giorgio Morandi
still life for about $1 million. And London’s Daniel Katz Gallery sold several works during the first two days, including a large Renaissance bust sculpture by Stoldo Lorenzi that went in the region of £500,000 and a painting of a Javanese Dancer by Dutch
Impressionist
Isaac Israels
for around €200,000. The gallery noted that more lucrative sales had been closed with institutions, but the details could not be disclosed.
Belgium- and Hong Kong-based Axel Vervoordt Gallery also had a strong showing at the preview, selling eight works from its booth in the Antiques section. A 1977 painting by Korean
Dansaekhwa
artist
Yun Hyong-keun
had sold for $500,000 and a
Gotthard Graubner
painting from the 1960s went for about $200,000, while a selection of ancient Roman and
Egyptian
objects had sold as well, on the range of €50,000 to €150,000. (The booth’s top-ticket items were still on offer towards the end of the preview, including a
Kazuo Shiraga
painting priced between $2–3 million and an
El Anatsui
tapestry priced at $1 million.)
Per usual, a spin through the sprawling fair (I clocked over three miles while reporting one day) is a journey through the history of human creativity: from prehistoric fertility figures to a diamond-encrusted
Salvador Dalí
-designed ring, from a Renaissance portrait by
Artemisia Gentileschi
to a contemporary glass sculpture by
Roni Horn
that literally weighs a ton. Dealers widely reported that the quality of work on offer at this year’s fair met TEFAF’s usual high standards. The quality is matched by the expertise of the collectors who attend, such as those observed discussing the finer points of
Tang Dynasty
horse sculptures or Roman micro-mosaics. 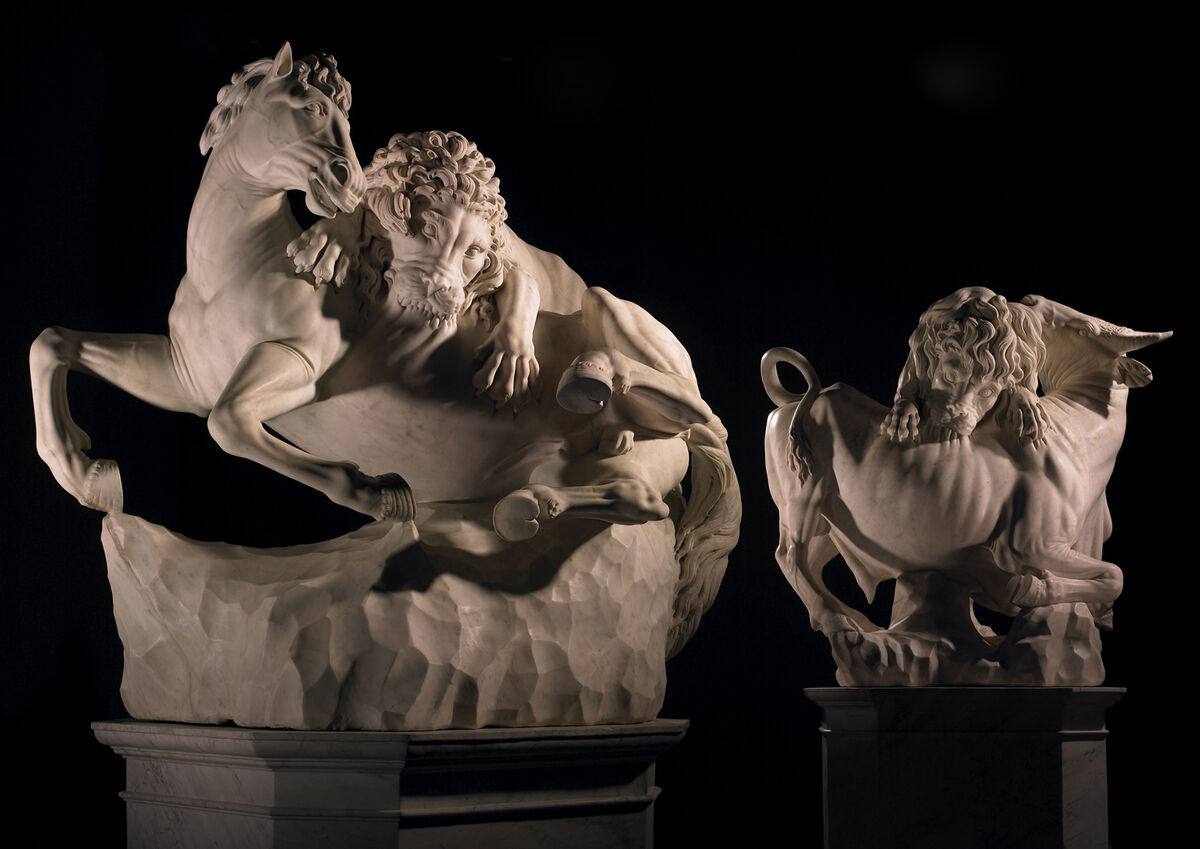 Sculptures attributed to Giovanni Battista Foggini and his workshop. Courtesy of Tomasso Brothers.

Advertisement
The new two-day preview period gave these passionate collectors more time to get into the weeds of niche corners of art history—and the dealers more face time with the super wealthy people who keep flying all over the world to attend fairs. Interestingly, the ultra contemporary fair Frieze New York recently announced that it will also be introducing two VIP days for the first time this May, while Art Basel in Hong Kong has been doing this since its 2015 edition.
Noach Vander Beken of Axel Vervoordt noted that the new schedule “gives us the chance to breathe a bit, to have proper discussion with collectors instead of having everybody in the booth at the same time,” he said. In the early afternoon of day two though, he noted, they were seeing less interest.
Dino Tomasso of Tomasso Brothers said the new strategy made for a quieter opening day, but overall was “in general more effective.” In comparison to last year, he noted, “it was just a different atmosphere, slightly more stylish, all the dealers were very pleased with it—even the skeptical dealers changed their minds.”
Tom Davies, director at Daniel Katz, noted that his initial skepticism was assuaged, that the strategy turned out to be “quite clear and coherent,” and that on Thursday, the fair had “the right density of people.” Benedict Tomlinson, director of Robilant + Voena’s London location, agreed, saying that the first day allowed for “gentle looking,” where clients could have an extra day to think over potential purchases and return on day two—“and they can still feel that they are the VIPs.” 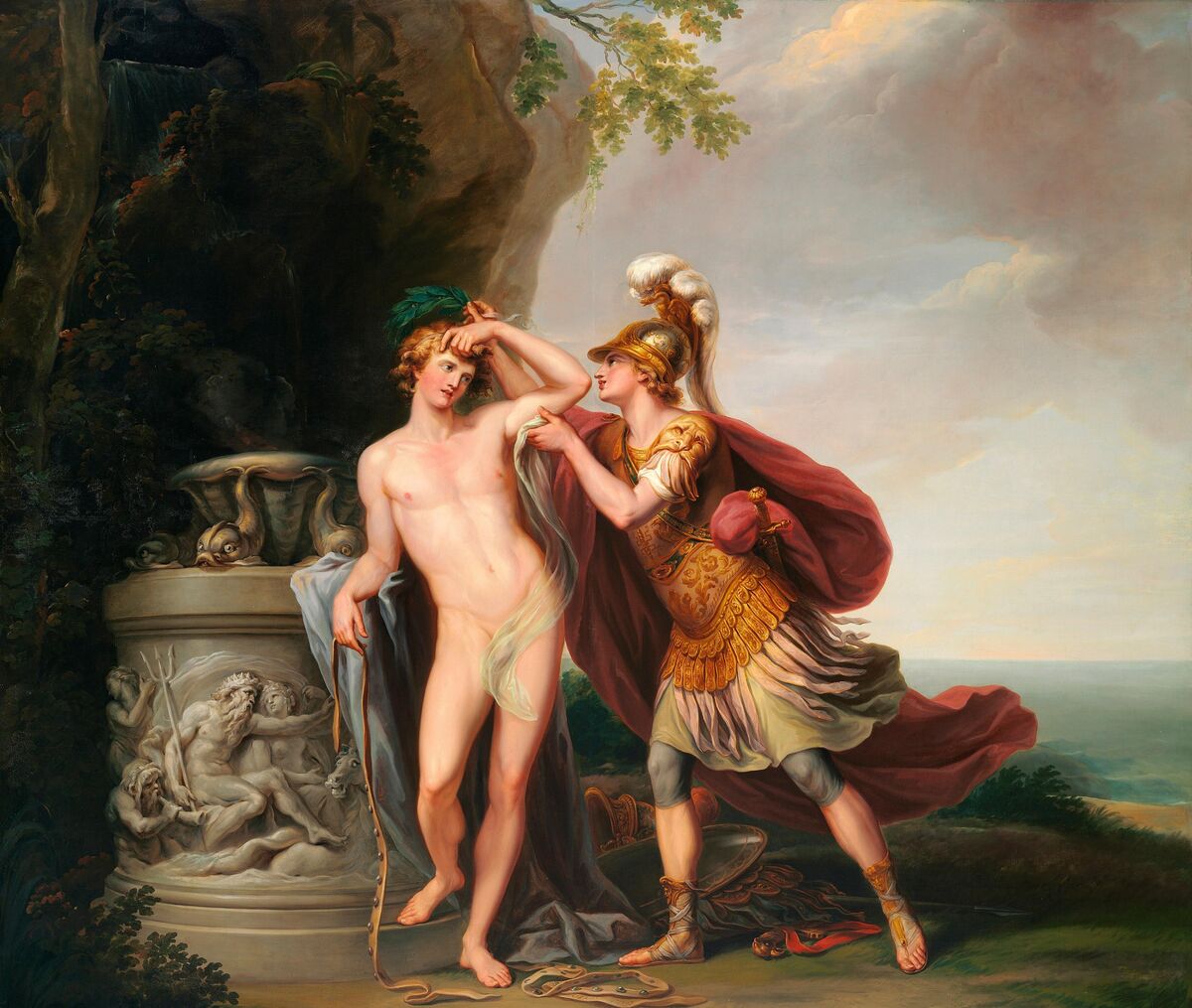 Several dealers also noticed that the while Europeans—hailing primarily from the Netherlands, Belgium, France, Germany, Italy, the United Kingdom—still made up the bulk of the attendees, there were more Americans than usual, which some credited to the three editions of TEFAF New York that have taken place since 2016.
“Now more American audiences are aware of the Maastricht fair because of TEFAF New York, and it made them want to come here,” said New York-based gallery owner Tina Kim, stating that she’d just spoken with a client from San Francisco. At the joint booth of Tina Kim Gallery and Kukje Gallery, she’d sold three major pieces on day one—a wall-based work by
Anish Kapoor
, a video piece by
Bill Viola
, and a painting by Korean Dansaekhwa artist
Ha Chong-Hyun
.
Davies noted that prior to this year, Americans may have been reluctant to travel to Europe for security reasons, pointing to the fact that the 2016 terrorist attack in Brussels happened right after the Maastricht fair that year. “I think that genuinely affected visitors from the States,” he said. 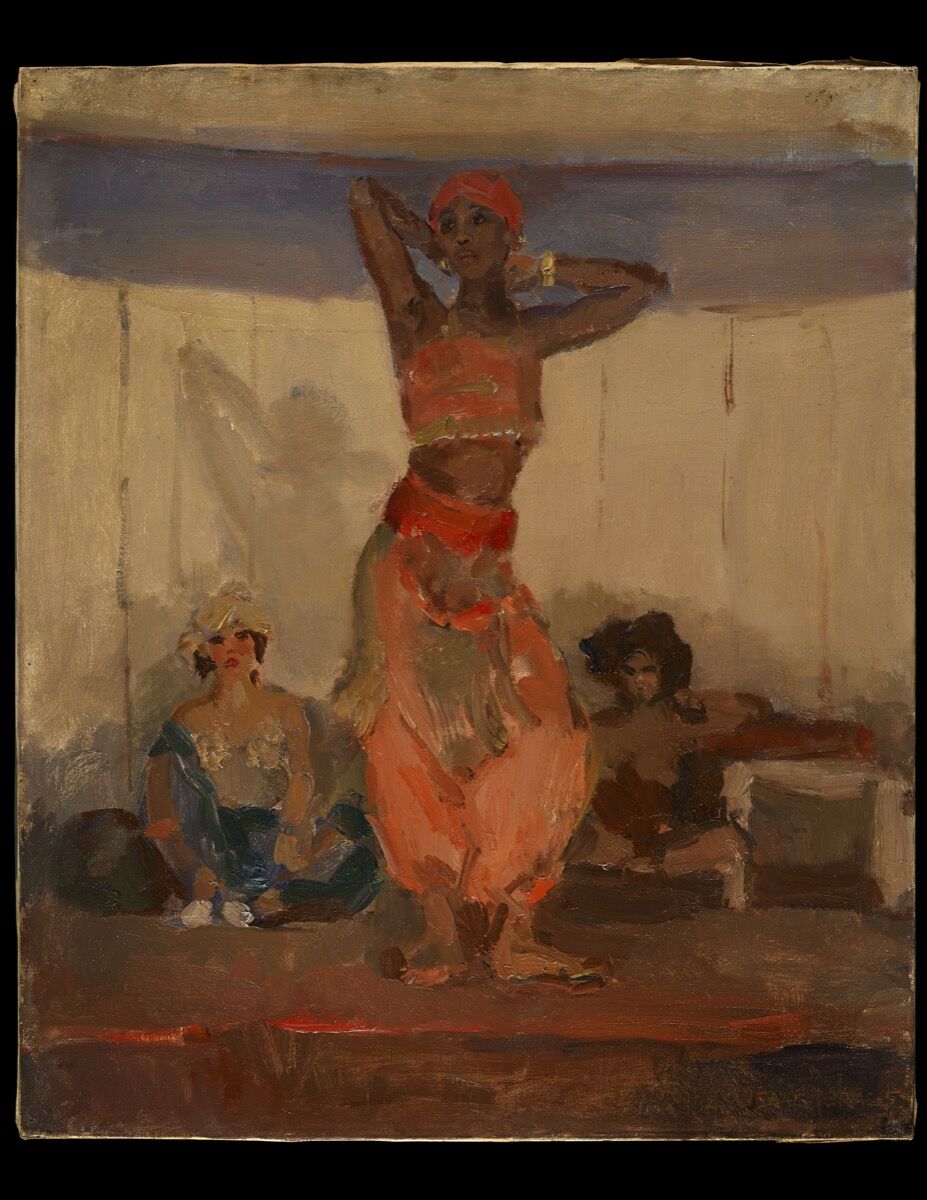 Tomasso also encountered “an abundance of Americans,” and added that he had just finished a promising conversation with a Chinese collector, which would be the gallery’s first time selling to a Chinese client.
Joe La Placa of Cardi Gallery’s London location noted that some of the credit should go to art insurance company AXA, which brought a large group of Asian collectors, many of whom were from Taipei, to the fair through their Hong Kong office.
But Vander Beken said that overall he estimates there’s been a drop in Asian collectors compared to the strong presence in the past three years. “I can tell you that three years ago, we had tremendous Asian presence here and lots of key pieces were sold to them,” he explained, noting that this was true of Axel Vervoordt’s booth and for other dealers as well. He added that a similar scenario occurred when the gallery showed at the first edition of TEFAF New York in 2016. This year, all of the works the gallery sold by early afternoon on day two will remain in Europe. 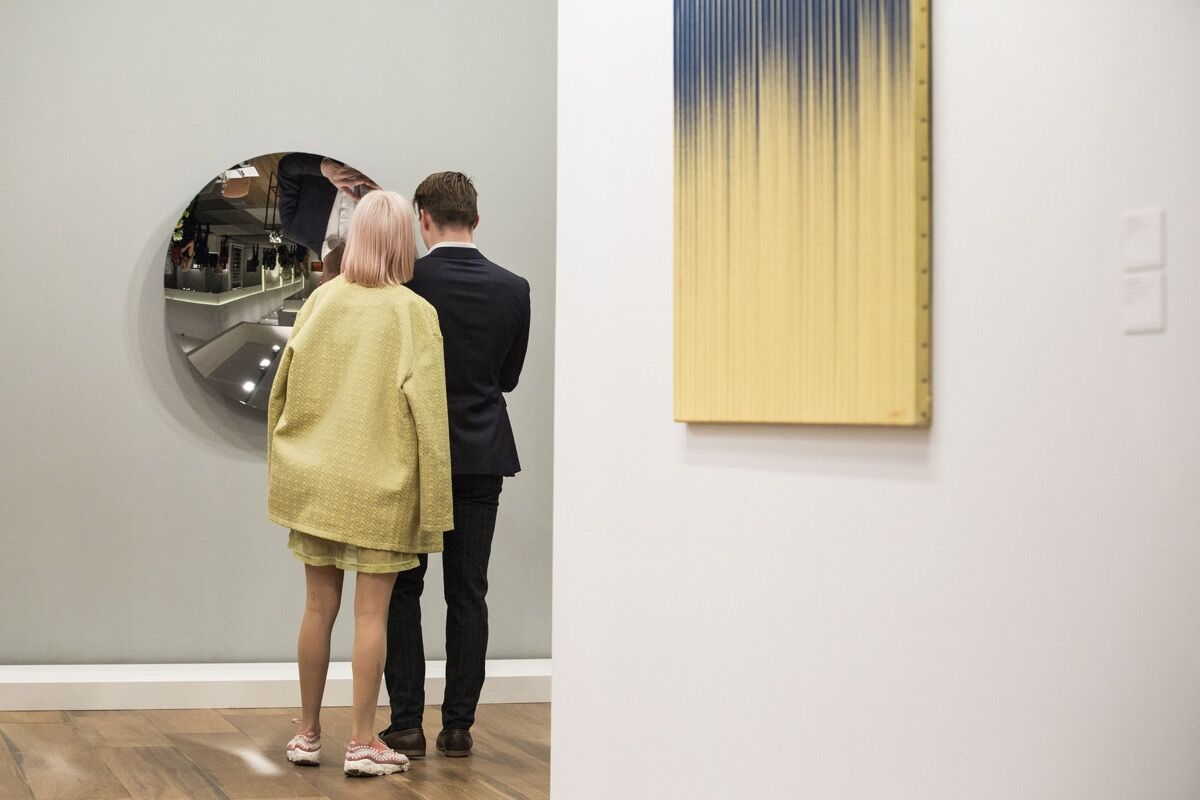 He also surmised that several promising young collectors he works with, who are interested in both contemporary and historic art, may have skipped TEFAF this year because it coincided with Armory Week in New York. “I think it’s important for contemporary collectors today to learn about the past,” he said.
The scope of art historical treasures on view give pieces from each era a special glow. Such is the case for Cardi Gallery’s booth, an anomaly at the fair, which features a single, large-scale installation,
Giulio Paolini
’s Nine Plaster Casts (1981–84), comprised of 11 pedestals, colorful drapery, and plaster casts of Apollo that appear in various states of disarray.
It is an unexpected booth for TEFAF, and not an easy piece to sell—it would need to go to a museum, foundation, or a private collector with a sizeable room to fill—but it was a risk the gallery was able to take after very strong results at Zona Maco in Mexico City, said La Placa. “This year we decided to do something which was appropriate to the fair, because this has a very classical feeling to it,” he said, noting that great modern and contemporary art should be able to hold its own when compared to historical pieces. Few other fairs offer the opportunity to compare Arte Povera with Ancient Roman statuary. And it’s this context that La Placa and other dealers say makes TEFAF Maastricht the best fair. 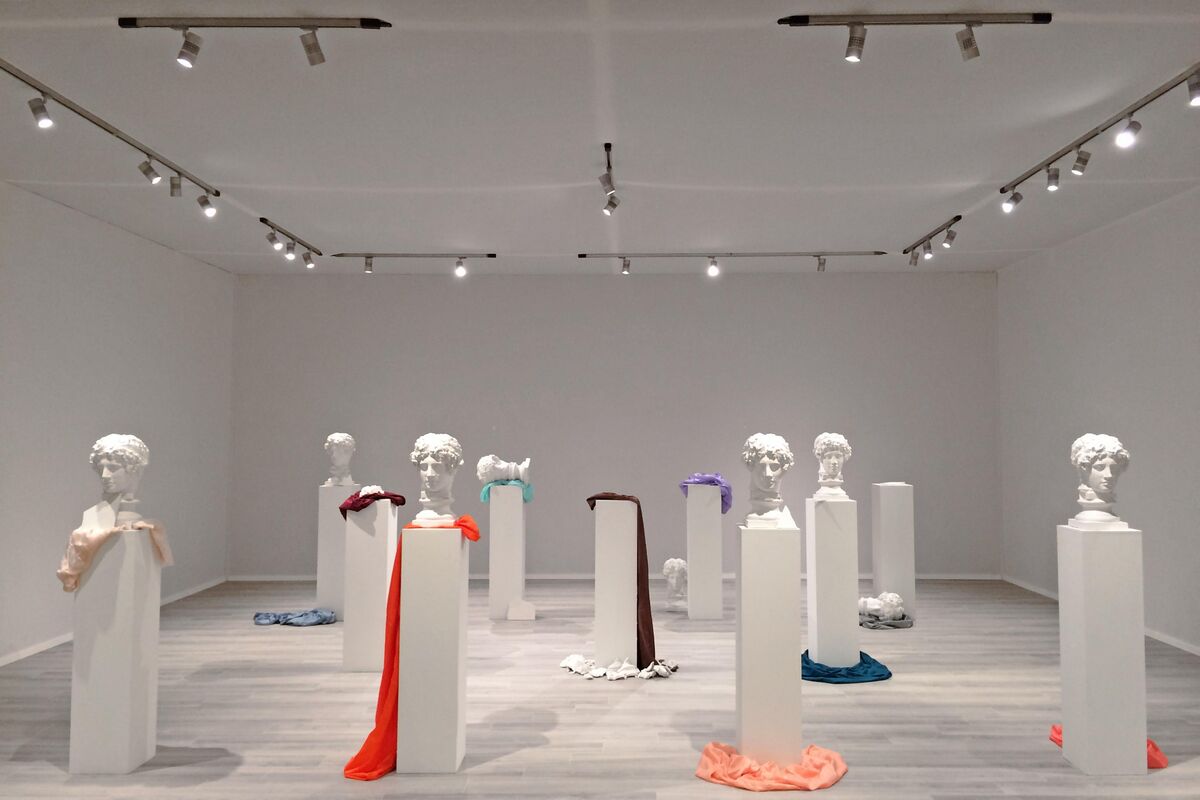 “In terms of the diversity of what you see, there’s not many museum collections that can replicate what is presented at TEFAF,” said Jason Busch of New York’s Jason Jacques Gallery, which is showing in the design section with a curated presentation including ceramics by
Beate Kuhn
and
Anne Marie Laureys
, paintings by
Richard Anuszkiewicz
,
Josef Albers
, and
Victor Vasarely
, and a suite of walnut anthroposophical furniture attributed to Felix Kayser. “If you want to come and open yourself up to learning about art, from the beginning of time to even the present, this is the place to do so—and it’s ever-changing.”
Tomasso noted that every year he wanders the aisles of the fair hours before it opens, admiring the offerings of his peers. Now in his eighth year showing at TEFAF, he’s still “massively impressed.”
“I’m the old-fashioned type of dealer where we’re interested in so many different things, all at the same time—Chinese art, works on paper, contemporary art, decorative arts,
Old Master
painting. Everything in here is of museum quality,” he offered. “It’s quite an honor to be able to be represented here as a gallery.”
Casey Lesser is Artsy’s Lead Editor, Contemporary Art and Creativity.
Related Stories