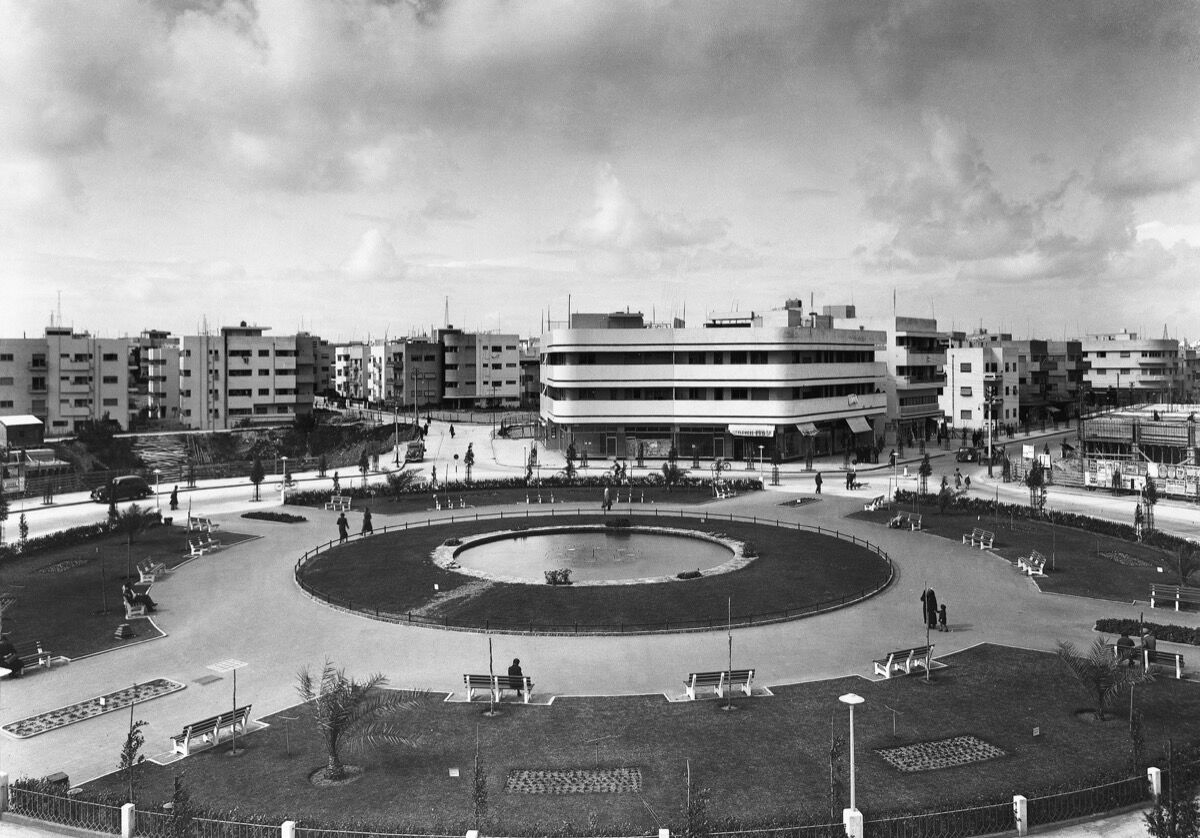 A cluster of white cubes perched on the sloping hills of Jerusalem’s inner city, the Israel Museum was designed by architects Al Mansfeld and Dora Gad in 1965 and inspired by the image of an Arab village sprawled across the mountainside. It is the country’s largest cultural institution and an iconic architectural landmark, a fusion of Europe’s structuralist and
Brutalist
schools of architecture and regional design influences. Mansfeld’s motto of “change, growth, and uncertainty” underpins the museum’s system of cubic spaces, which allow for the addition of more galleries. Indeed more space was recently added under the leadership of director James Snyder with the Israeli firm Efrat-Kowalsky Architects and the New York-based James Carpenter Design, who stayed true to the original design.
This week, the museum inaugurated its new Architecture and Design department with the opening of a compact and exquisite exhibition, “Social Construction: Modern Architecture in British Mandate Palestine,” curated and designed by architect Oren Sagiv, a history that offers an interesting precedent to the museum’s own building design. The exhibition—which draws on the research of one of Israel’s most renowned architects, Ada Karmi-Melamede, and architect Dan Price, published in Architecture in Palestine During the British mandate, 1917-1948—traces the influence of European Modernism on architecture in Palestine in the period before the founding of Israel. “While in Europe most architects were engaged in theoretical debates for or against the Modernist doctrine, architects in Palestine were actually building it,” they write in the book. “The local version—devoid of traditional symbols—became symbolic of the birth of the nation.”

Though the book spans over three decades, the exhibition focuses only on architectural projects realized between 1930 and 1940—the years when, according to Sagiv, European Modernism was embraced with the most coherence in Palestine’s three major cities: Ancient Jerusalem and the slopes of the Judean Mountains; the port city Haifa along the rugged bay; and Tel Aviv, the country’s first Hebrew city. It was during those years that Modernism, a movement determined to embrace a new beginning and ideological foundation, arrived in Palestine.
Its arrival, along with the influx of immigrants from Europe following the Russian Revolution of 1905 and the rise of the Nazi regime in 1933, announced the elimination of the ornament and the celebration of function. “As newcomers, the architectural pioneers in Palestine did not have to struggle with classical architectural European precedents or adopt the vernacular ones,” write Ada Karmi-Melamede and Price in their book. “They were free to experiment and search for their own version of the modern language, which was neither inspired by European technological innovations of the time nor enamored of the picturesque local architecture and handicraft. A unique modern language evolved, which was a transformation of a borrowed set of rules.”
The exhibition also sheds light on the myth of the White City of Tel Aviv. UNESCO declared Tel Aviv as the White City Heritage Site in 2003 due to its housing the world’s largest collection of International Style (referred to by locals as simply “Bauhaus”) buildings. This declaration attracted not only architecture enthusiasts and an enormous real estate boom, but also a critique of the ethics of “whiting-out” the actual history of Tel Aviv and its origins in the adjacent Arab city of Jaffa. The reappearance of refurbished luxury
Bauhaus
architecture in Tel Aviv, after years of neglect, is one of the factors driving the public’s interest in this exhibition. 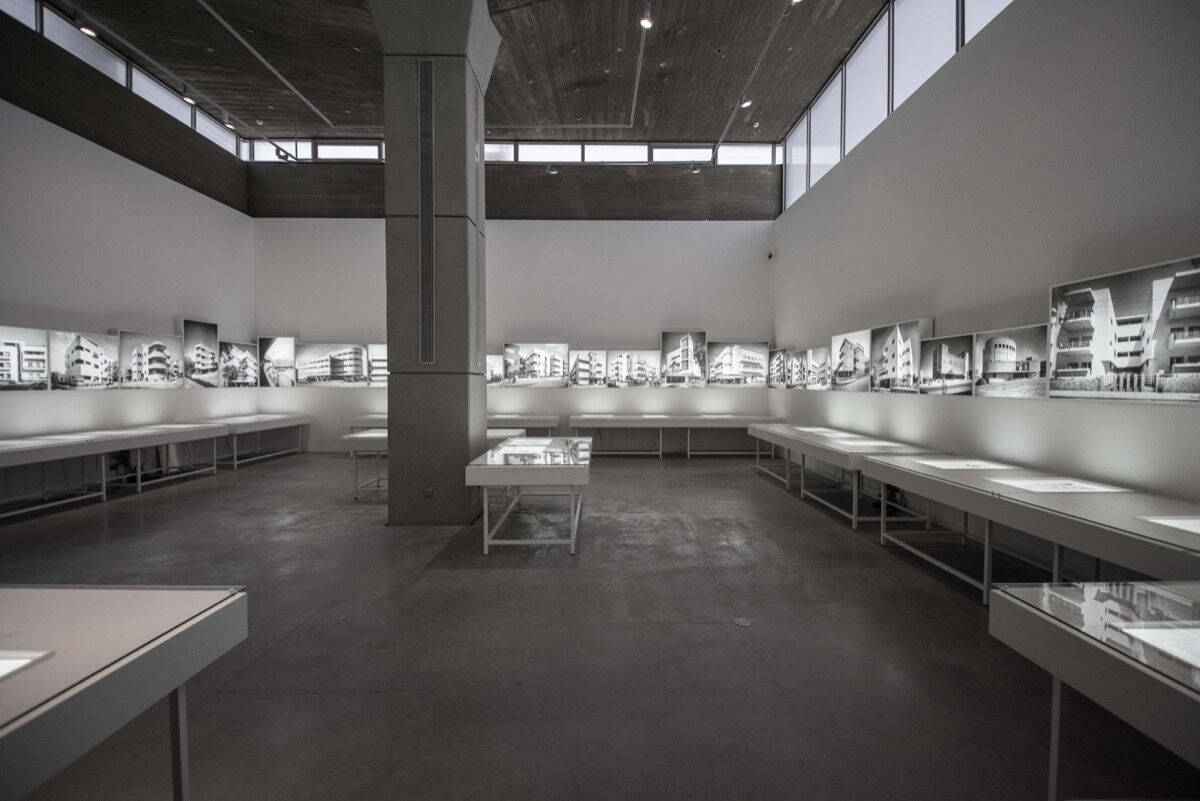 Installation view of “Social Construction: Modern Architecture in British Mandate Palestine.” Photo by Or Kaplan, courtesy of the Israel Museum.

Advertisement
The City of White has never been whiter than in Sagiv’s glimmering installation, set against Mansfeld’s exposed concrete gallery. A series of large-scale images of iconic building projects are illuminated with delicate light boxes arranged like the artificial skyline of a phantasmagoric city. The exhibition also offers an in-depth analysis of particular attributes commonly associated with Modern architecture, such as double-layered façades, publicly accessible rooftops, and a clear relationship to the architecture of the street. Through a set of beautifully hand-drawn illustrations, these architectural features are defined and contextualized to become a consistent architectural language. “Architecture expresses something very natural,” Sagiv explains, “a relationship between the intent (the drawings) and the result (the buildings), perceived by the senses in our daily lives. These drawings communicate an architectural thought and one of the messages of the exhibition—that architecture is not simply about form, but about the values of a society.”
—Gili Merin
“Social Construction: Modern Architecture in British Mandate Palestine” is on view at the Israel Museum, Jerusalem, Jul. 7–Dec. 31, 2016.
Related Stories