For Tennessee Williams, Painting Was Another Way to Express Emotions 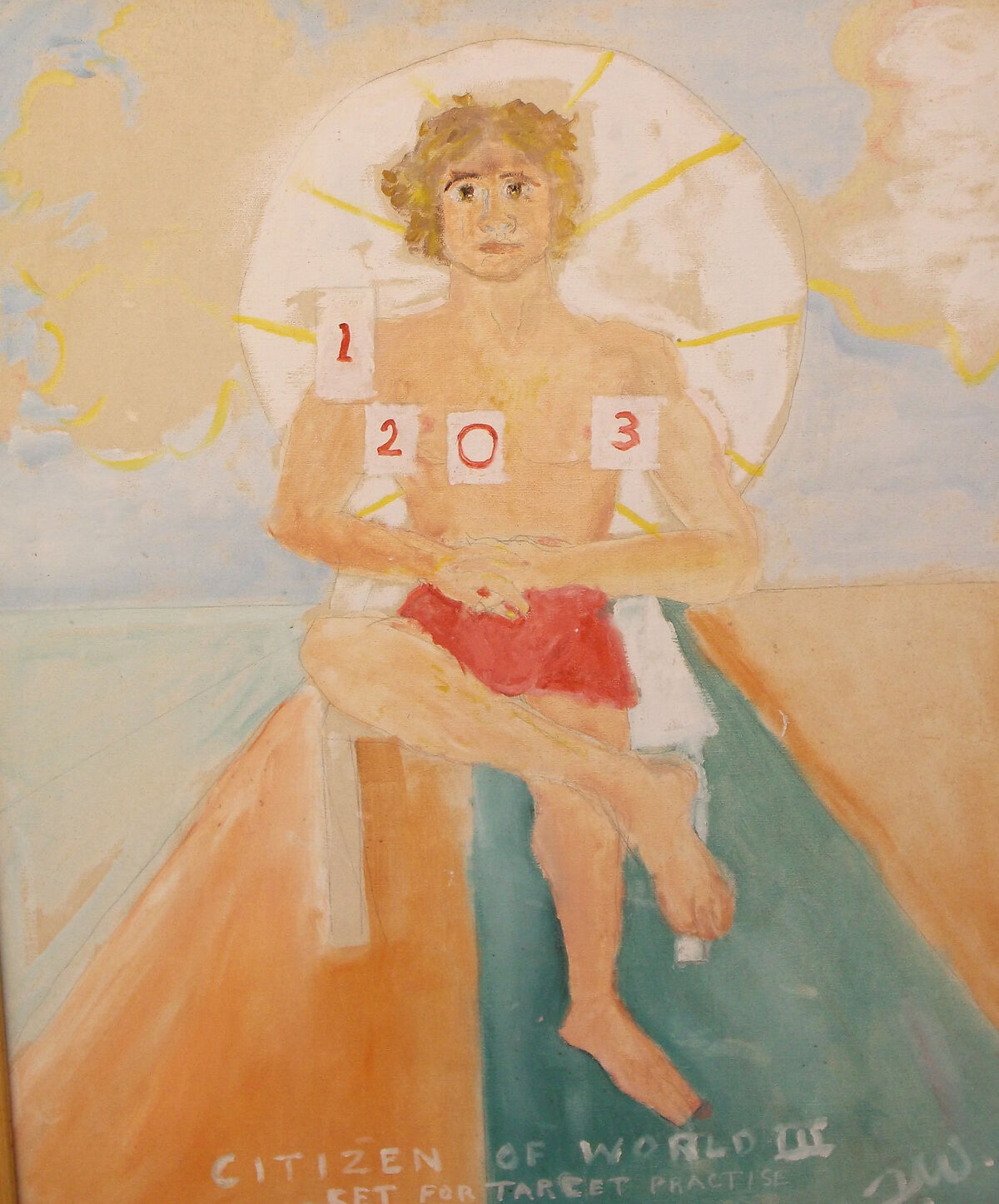 Tennessee Williams, Citizen of World III, 1970s. On loan from David Wolkowsky. Courtesy of The Jewish Museum of Florida-FIU. 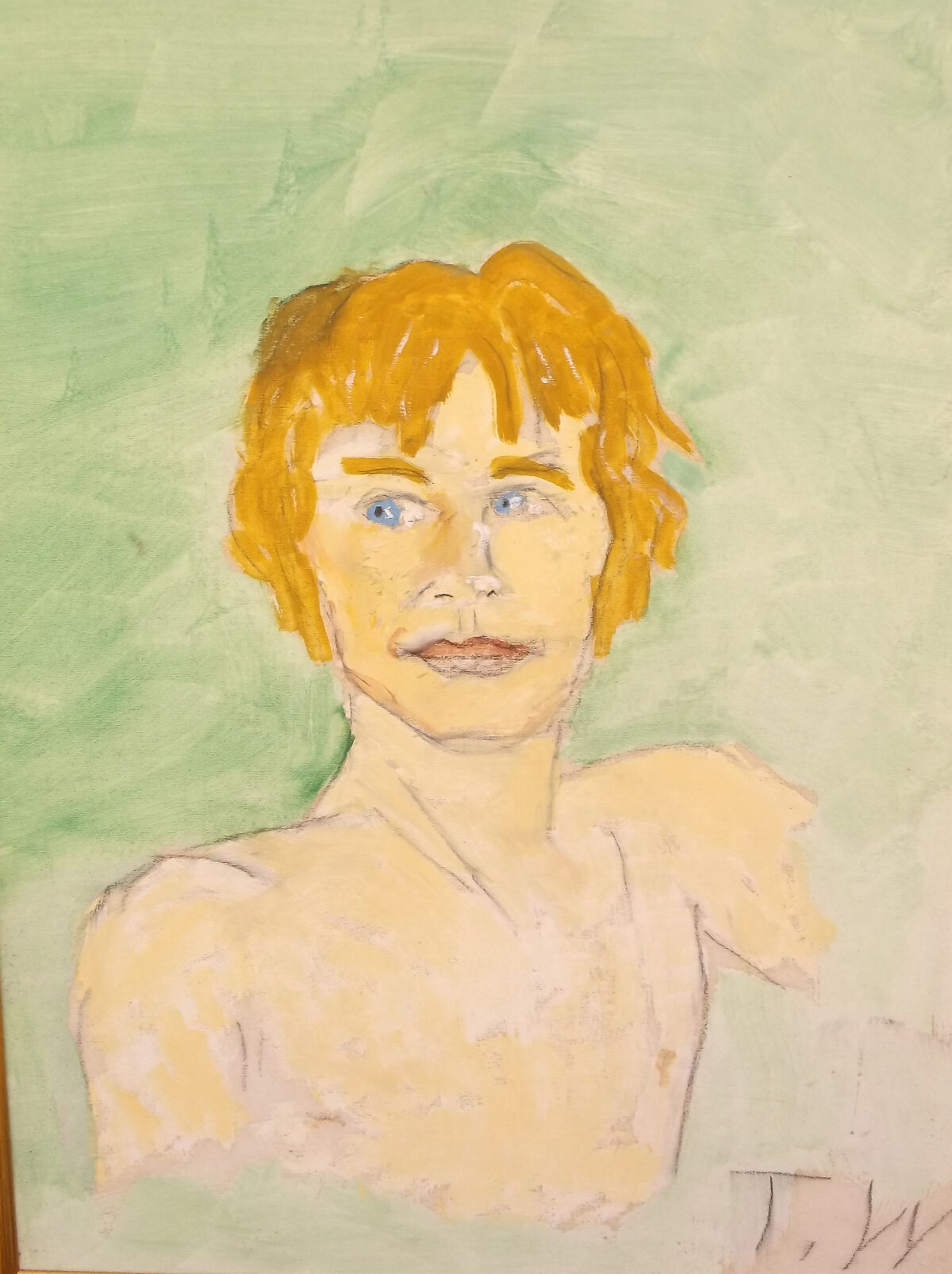 When Tennessee Williams wrote one of the most heated scenes in the 1947 play A Streetcar Named Desire, he imagined a
Vincent van Gogh
painting hanging on the wall. “There is a picture of Van Gogh’s of a billiard-parlor at night,” he wrote in the stage directions for scene three. “The kitchen now suggests that sort of lurid nocturnal brilliance, the raw colors of childhood’s spectrum.” Williams presumably saw in the Dutch artist’s painting The Night Cafe (1888)—with its agitated brushstrokes and haloes of oppressive light emanating from hanging lampshades—an apt corollary for a scene of simmering tension that unfolds around a poker table on a hot, humid night in New Orleans.
It wasn’t the only instance in which Williams responded to a work of visual art. (He penned a poem in response to
Pierre Bonnard
’s 1913 Salle à manger à la campagne after seeing the painting on a visit to the San Francisco Art Fair in 1939.) And the playwright was also a visual artist in his own right, albeit an amateur one. Over the course of his life, he made dozens of paintings—of lovers, characters from his plays, actors, authors, and landscapes—that give a glimpse into Williams’s personal life, and suggest another outlet the writer used to express his emotions. 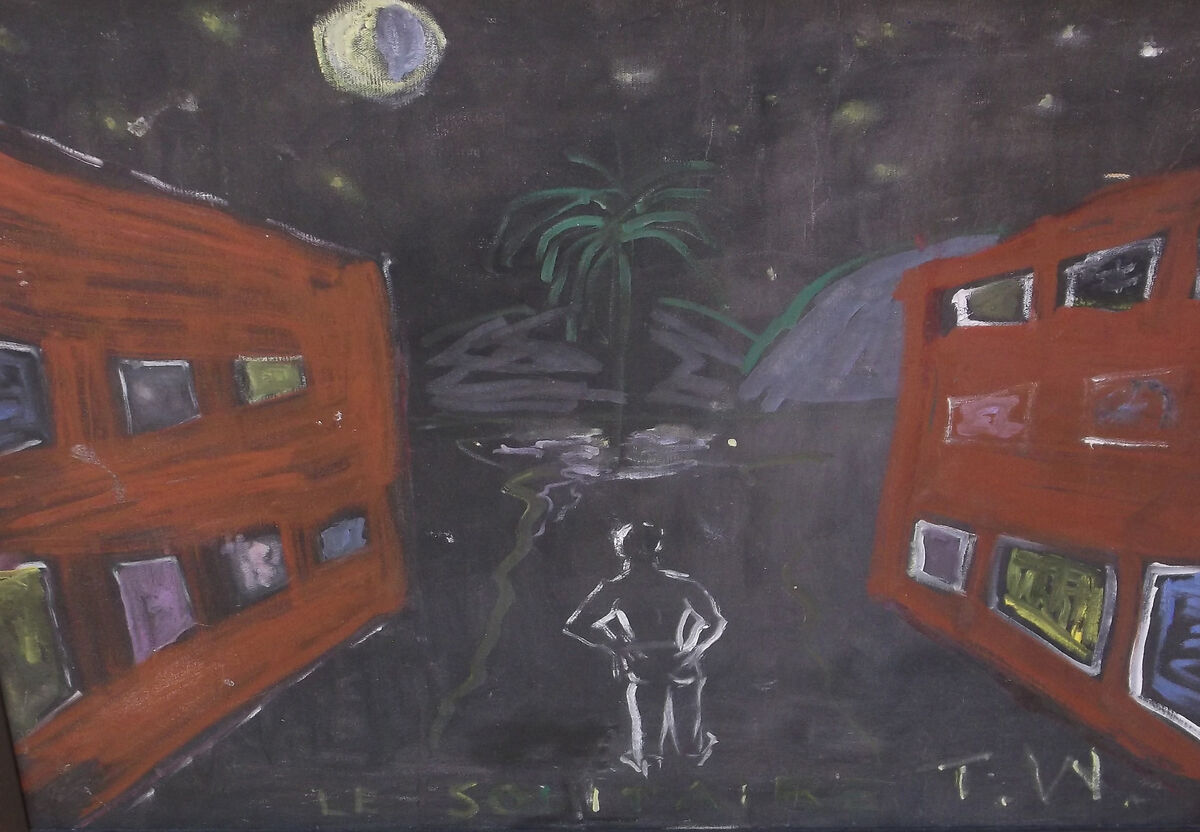 Tennessee Williams, Le Solitaire, 1977. On loan from David Wolkowsky. Courtesy of The Jewish Museum of Florida-FIU.

“It’s a private look at the man behind the writer,” said Jacqueline Goldstein of the Jewish Museum of Florida, where nine of Williams’s paintings are currently being shown. The works are on loan from the collection of the late David Wolkowsky, a friend of the artist who is known to have helped transform Key West, Florida—where Williams lived part-time for more than 40 years alongside cultural luminaries like Ernest Hemingway and Robert Frost—into an artist’s colony.
Williams had his first real taste of painting while living in California with his friend Jim Parrott, whom he’d met in New Orleans after graduating from college. They had embarked on a road trip to Laguna Beach, where Jim’s uncle owned a squab farm. Williams was “living hand-to-mouth at this point,” said Carolyn Vega, the curator of “Tennessee Williams: No Refuge but Writing,” an exhibition held earlier this year at New York’s Morgan Library & Museum. “He’s picking squab, renting bicycles because he can’t afford to buy a bicycle.”
It was there that—along with writing poetry and submitting plays to contests—Williams began taking free art lessons from Adelaide Parrott, Jim’s aunt, who was a WPA instructor. In 1939, Williams wrote a letter to his mother reporting his new pastime. “I’ve made 3 paintings of scenes out here which are really good,” he wrote. “[Adelaide] says I have remarkable talent so maybe I’ll come back East in a berêt.”
2 Images
View Slideshow 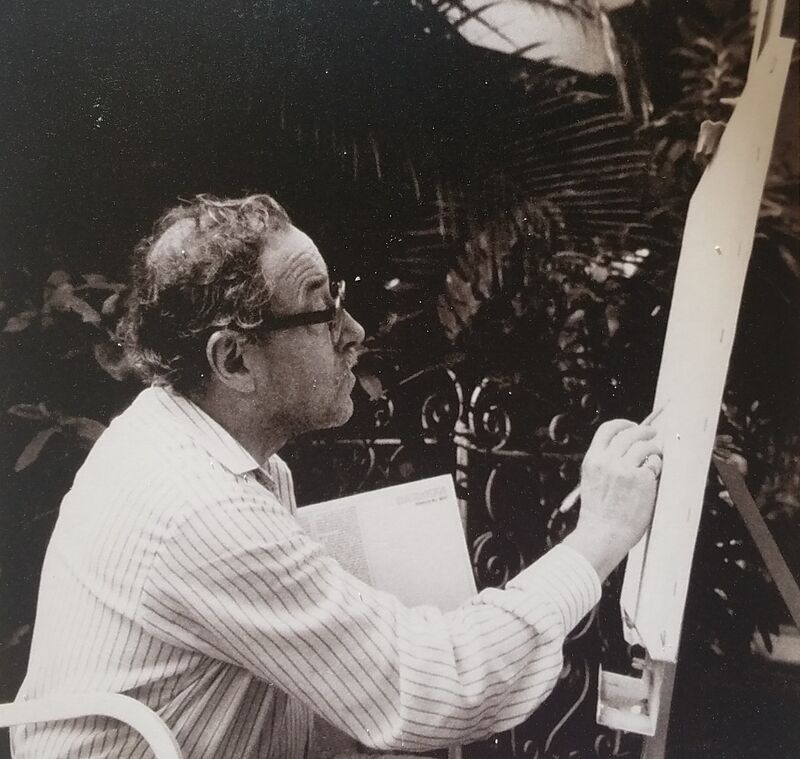 Advertisement
It was during that same spring, Vega said, that Williams received a telegram notifying him of having received a $100 prize for a group of one-act plays—“not a groundbreaking prize,” Vega continued, “but his first prize and not an insignificant amount of money for Williams at the time.” That first break set him on course towards theatrical success. (He would receive his first Pulitzer Prize, for Streetcar, less than a decade later.) But he would continue to paint, on and off, for the rest of his life.
Though it’s not known how many paintings Williams produced, another cache of them is housed at the Harry Ransom Center at the University of Texas at Austin, alongside many of his archives and papers. That collection includes portraits of Jim Parrott, as well as (undated) portraits of his longtime lovers Frank Merlo and Pancho Rodriguez.
In one painting, Williams depicts the dark-haired Merlo against a soft green background, tenderly holding and gazing at a plant leaf. An image of Rodriguez, who is thought to have informed Williams’s characterization of the brutish Stanley in Streetcar, shows him head-on, with a half-smile and stars (or scars?) etched into his face. Among Williams’s paintings that are known to be from the 1970s—and which make up much of the Wolkowsky collection—are a portrait of the actor Michael York, who played the role of Felice in Williams’s Out Cry; and a painting entitled Citizen of World III (1970s), which shows a seated man whose body has been turned into a target. It is thought to be a representation of the persecution that Williams faced as a gay man in the American South. In a similarly melancholic vein, Le Solitaire (1976) shows a lone figure wandering out into the emptiness of a jet-black night, barely penetrated by stars and moon. 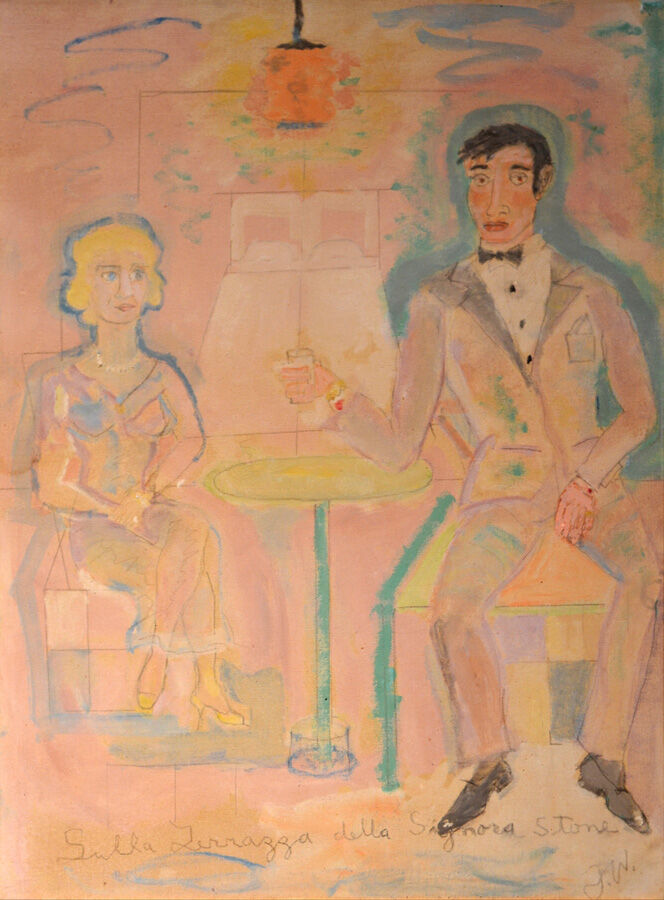 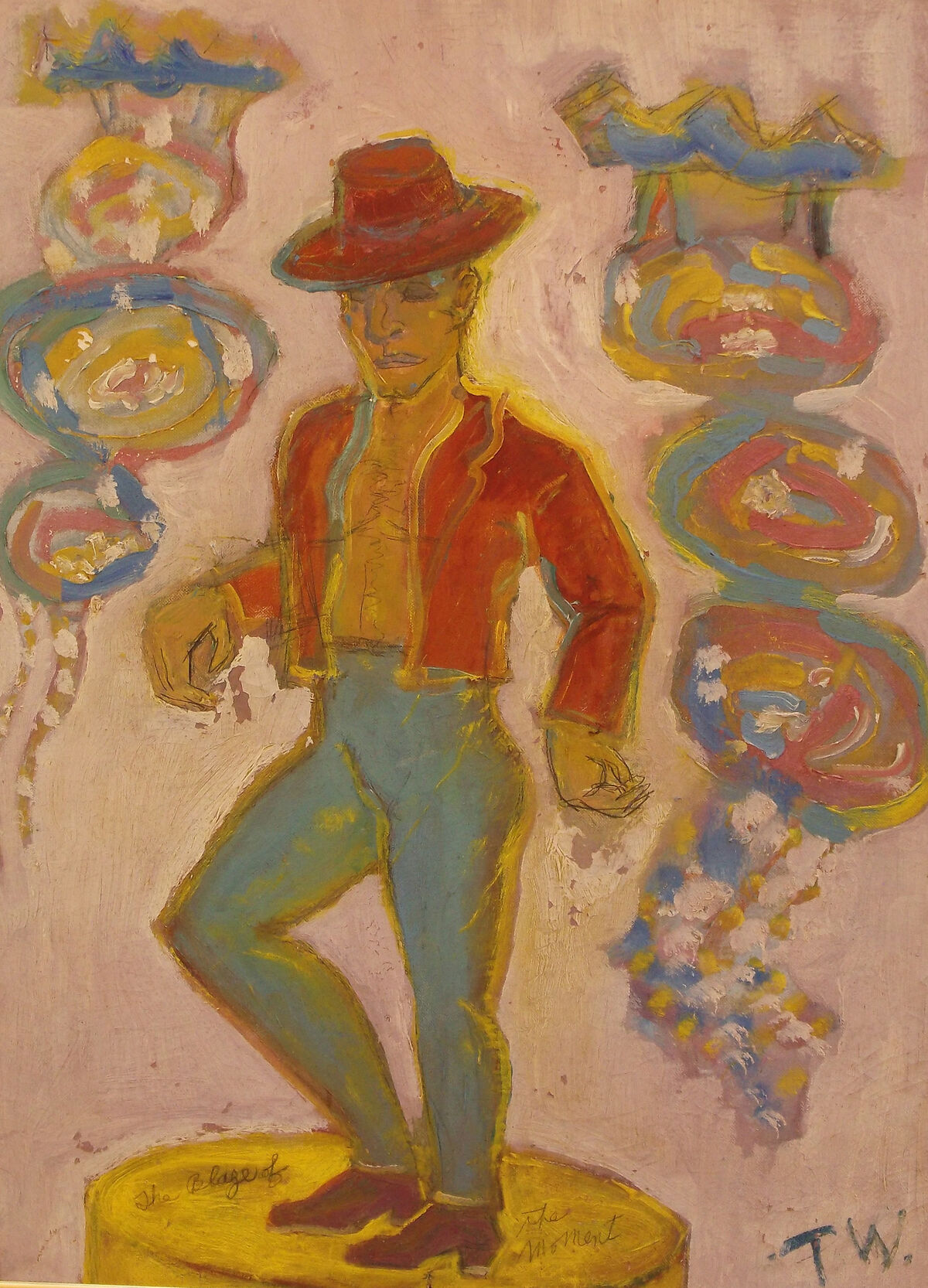 Tennessee Williams, The Blaze of the Moment, 1970s. Courtesy of The Jewish Museum of Florida-FIU.

The work recalls an observation that Vega made in her research into the playwright. She was struck, she said, by the evocative production notes Williams penned for his set designers. In his notes for Cat on a Hot Tin Roof, for instance, he imagined a room with a bed that was haunted by the ghosts of gay lovers from the century past, roofed only by the night sky. In the description for another play, he suggested a window that was cobwebbed and looked out over “a disturbing emptiness.”
Williams, Vega said, was a “lifelong rewriter and reviser of works” who would go on tinkering with characters long after they’d debuted on Broadway. It’s in that light, perhaps, that we can understand why he revisited characters from his plays and novels in paintings years later, such as in Sulla Terrazza della Signore Stone, which depicts the characters from his first novel, The Roman Spring of Mrs. Stone—a story about an older woman who falls in love with a younger man after the death of her husband, and becomes undone.
Williams was no less scrutinizing when it came to others’ interpretations of his plays and characters. When American painter
Thomas Hart Benton
painted his own rendering of that heady poker night in Streetcar, Williams admired it as a work of art, but felt it captured “too much of the Stanley aspect of the play,” Vega said.
Tess Thackara
Related Stories