Terrariums Let Anyone Create a “Perfect World” in Their Own Apartment 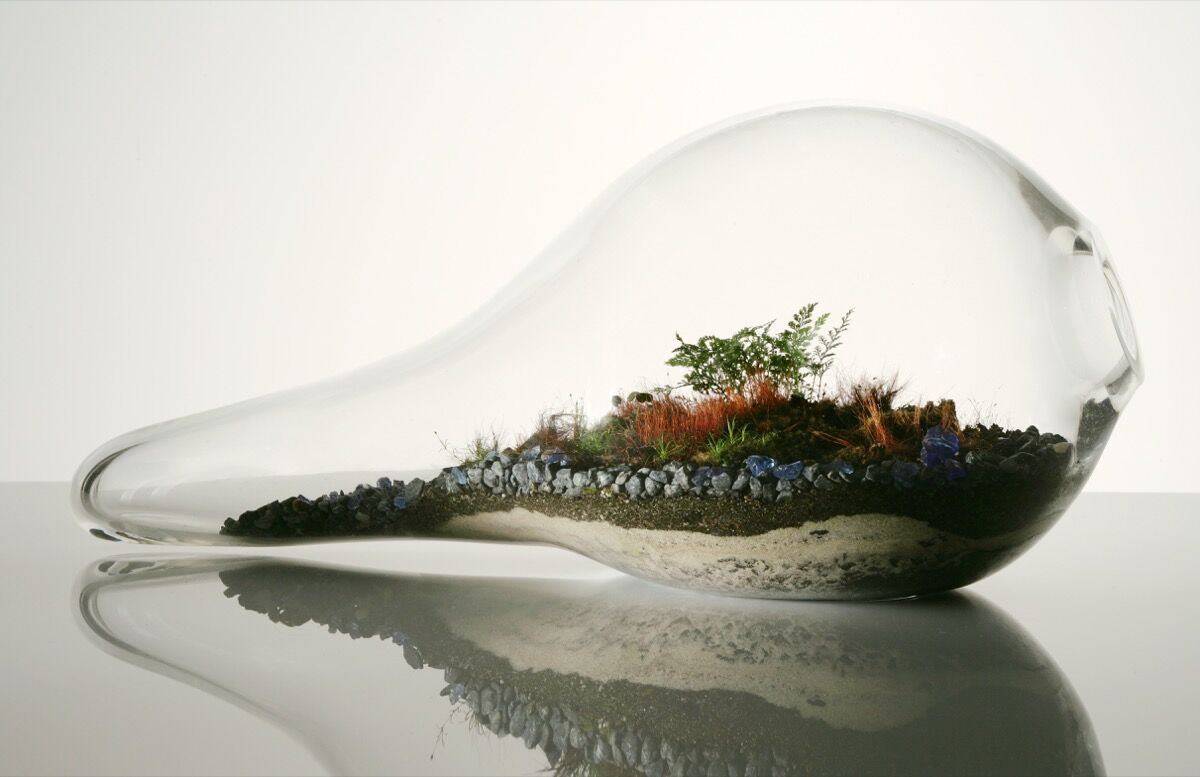 The artist
Paula Hayes
has always been obsessed with the natural world, so it was never a question of if she would incorporate plants into her work, but how. That answer came in 2004. At a show entitled “Forest” at Salon 94 in New York, she introduced the world to the contemporary terrarium: a delicate blown-glass sphere filled with stones, moss, and a few small plants. The art world’s reaction to her work was immediate and enthusiastic. Her terrariums were featured in Wallpaper and T Magazine, and the gallery sold them as fast as she could make them. “I had never had that response to my work,” Hayes recalled recently. “I had never had so many people say, ‘I’ve never seen anything like that.’”
That Hayes would elevate the terrarium to fine art makes sense in light of her upbringing and education. The artist grew up in rural Massachusetts, where she spent the majority of her childhood playing by herself outdoors. When she moved to New York City in the 1980s to attend the Parsons School of Design, she began working as a gardener on the side. “I had to be around plants when I moved to New York City,” she told Artsy. “I’m very sensitive to the environment. It’s a natural connection that I have.”
One of Hayes’s first shows to incorporate living plants, held at AC Project Room in 1997, featured a conceptual piece involving a shelf of potted plants, entitled An Agreement for a Potted Plant as an Artwork. Hayes would only allow the sale of plants to a collector who co-signed a contract promising to keep them alive. “I was sincere, and I crafted it very, very carefully,” she told Artsy. In the contract, there is a clause that addresses what happens if one of the plants dies. “It’s phrased as a ‘perfectly understandable mishap,’ but I wouldn’t say it’s tongue-in-cheek,” she said. “Because it’s really about the idealism to go on in the face of the potential of death.” This show also included one of Hayes’s first terrariums. The artist studied the history of terrariums extensively before making her own, which she modeled after the Wardian Case, a Victorian-era invention that allowed explorers to transport plant life from one continent to another by ship. Once the interior of the case was in equilibrium, it could be sealed, maintaining a constant atmosphere for the plants inside. “They’re really this more perfect world,” Hayes said of the original terrariums.
Wardian Cases are named after Nathaniel Bagshaw Ward, who discovered the possibility of creating a closed, miniaturized ecosystem by accident in 1829. He lived in polluted inner-city London and was obsessed with cultivating a fern garden, according to the history recounted in the 2007 essay “Unnatural History: Ward’s Glass Cases.” Ward would bring ferns back to London from the countryside and attach them to a rock wall outside his home, which he kept moist with an invention that trickled water down the wall all day and night. But no matter what he did, these plants died.
One day, Ward sealed a moth chrysalis in a jar with a handful of soil, curious if the moth would metamorphose inside. What he got instead was a tiny fern, which sprouted from the soil and survived for three years in the closed jar. Word of his accidental invention spread, and within a decade, Wardian cases had gone from a means for transporting plants overseas to a popular design element in middle-class Victorian drawing rooms. These decorative terrariums were referred to as “crystal cases” and, like today’s terrariums, allowed an increasingly urban population to grow healthy plants inside. 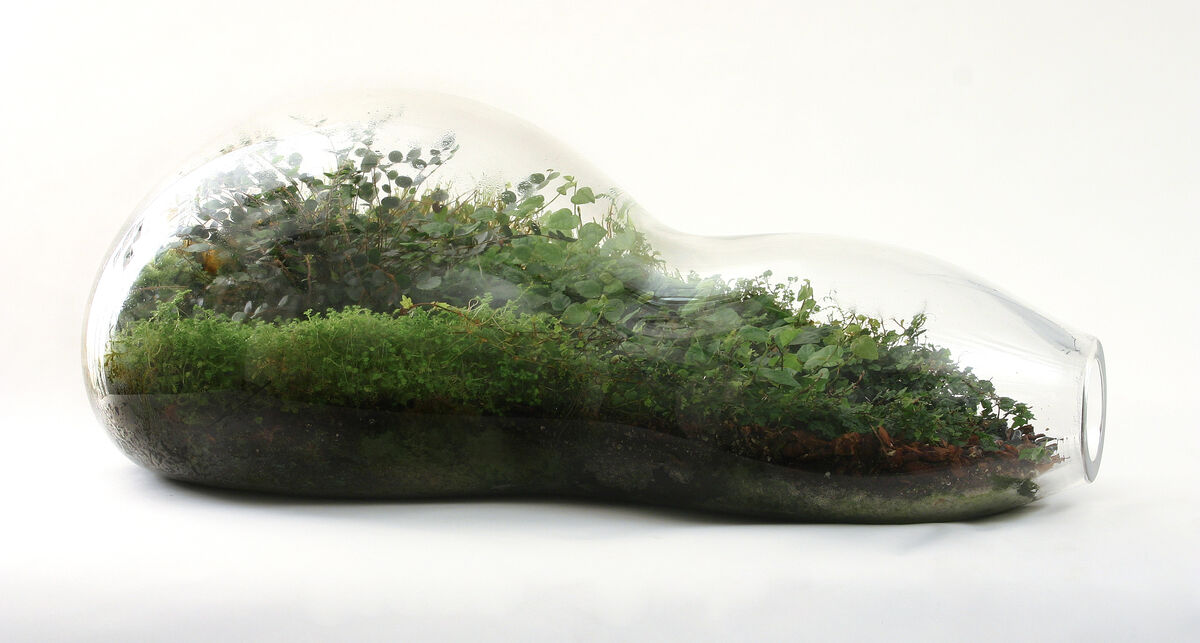 Advertisement
The industrial revolution was well underway by the time Ward discovered the terrarium, and it was instrumental in driving the object’s popularity. Throughout the Victorian era, people were moving in droves from the countryside to the city in order to work in the factories that were driving England’s economic growth. In a book he wrote about his invention, Ward highlighted “how close-pent man regrets the country,” detailing how his invention would allow city-dwellers who missed nature to grow plants in the confines of their apartments, even when sunlight is scarce and air quality is poor. This humble, domestic goal was what mattered most to Ward, not plant transportation or science. In his book, he urged poor Londoners to embrace terrariums as a way to bring life into their homes.
Over time, the obsession with terrariums faded, but it returned in the 1960s and ’70s when the environmental movement—and hippies—burst onto the scene in America and the U.K. Rachel Carson’s Silent Spring, published in 1962,revealed the toll of pollution on the environment and laid the groundwork for a movement that coalesced into the establishment of the first Earth Day on April 22, 1970. Terrariums were the physical embodiment of that movement: little shrines encapsulating the fragility of nature. These terrariums were mostly homemade, using a fishbowl or another sort of container that would have otherwise been discarded (a perfect example of what has come to be known as upcycling). Of course, terrariums were commodified, too. A company called Tiara Casa mass-produced a DIY terrarium kit—consisting of a large plastic globe atop a tall white stand—that became a fixture in many 1970s living rooms. 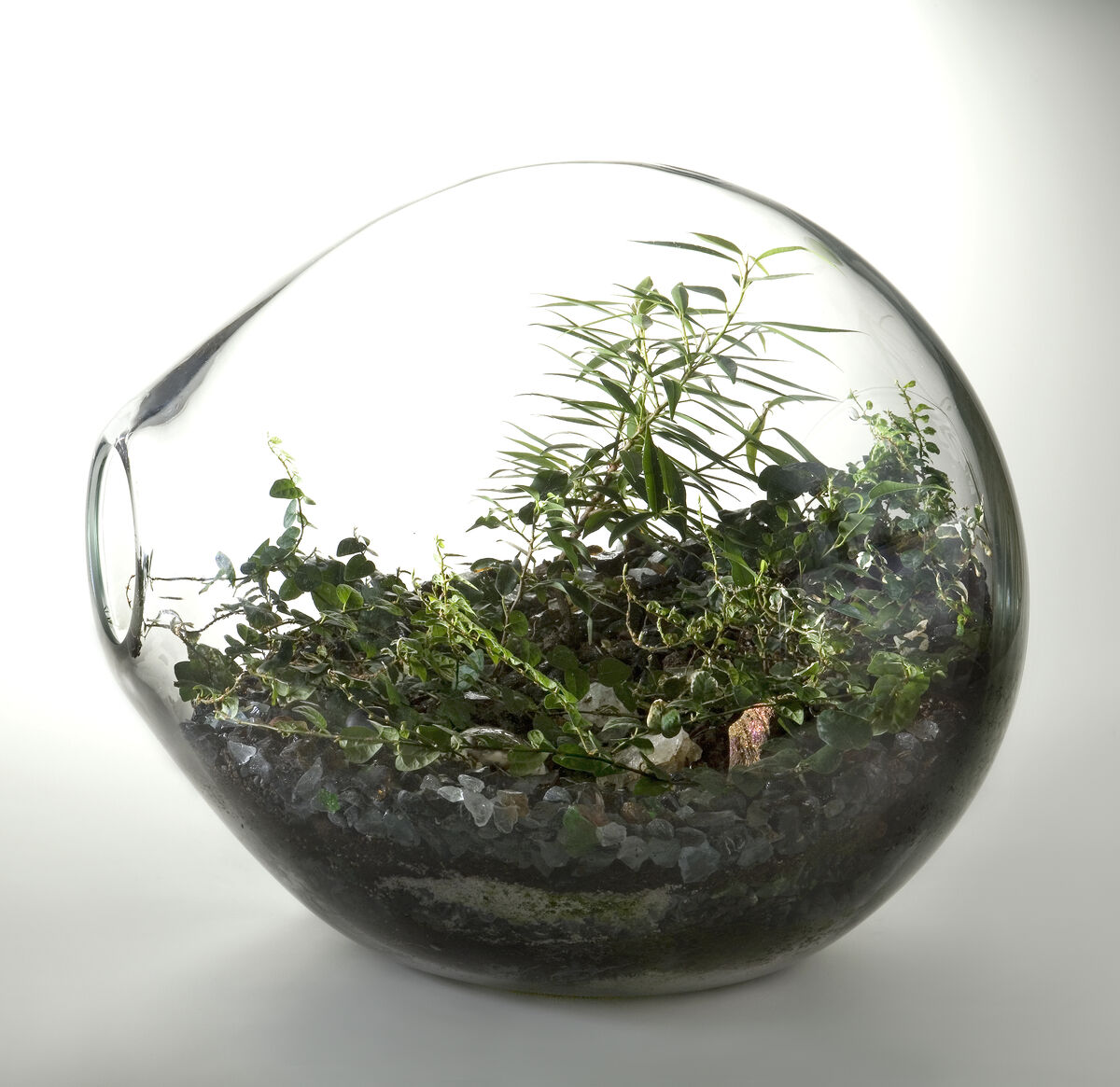 While the Wardian Case was a practical invention that allowed city-dwellers to enjoy growing plants in their homes, the 1970s terrarium was a political statement. Several decades later, Hayes’s terrariums combine elements of both. They keep plants alive in apartments, sure, but they serve another purpose—that of allowing us to interact with, and control, the natural world. “It’s seductive,” she said. “It’s a perfect world you can hold in your hand.”
A combination of idealism and escapism is what elevated Hayes’s terrariums beyond those of the past, into the world of both fine art and contemporary design. After making her first terrarium out of geometric wood and glass, Hayes decided to experiment with other shapes. “I wanted to manifest what I experienced emotionally when I feel overcome with a positive charge,” she told Artsy. She settled on blown-glass containers because of the way they mimic the curve of the sky. “The container itself has this relationship to the dome of heaven—you can imagine yourself inside,” she said.
To say this form resonated is an understatement. By 2008, Hayes started seeing copycat versions popping up online. “I was surprised by the degree to which people were really studying and replicating my terrariums,” she told Artsy, “but I didn’t feel like it was in the spirit of what I do.” Rather than fixate on the appropriations, Hayes chose to see the spread of terrariums inspired by her own as a natural process—the organic growth of a seed planted in the fertile soil of millennials’ imaginations. “I’m more interested in contemplating my terrariums’ place in the zeitgeist than in taking credit for them,” she said. Hayes stopped placing plants in her terrariums around 2009, turning to inorganic materials instead. For a series called “Crash Sites” from 2013, Hayes filled blown glass orbs with material like corroded transistors, geodes, and mineral dust. She re-applied this concept in “Gazing Globes,” a commission for Madison Square Park that ran from February to April in 2015. The show consisted of 18 spheres suspended atop white pedestals (incidentally reminiscent of the Tiara Casa terrariums of the 1970s) and filled with little landscapes made out of radio parts, crystals, and transistors, all covered in iridescent dust made from pulverized CDs. Rather than the magical winterscapes Hayes hoped to evoke, many saw imminent disaster in the globes. Reviews of the show lauded Hayes as a futurist, who had taken the concept of gazing globes—thought by the Victorians to ward off evil spirits—and turned it into a cautionary tale about climate change and death.
Located in the middle of a park in New York City, “Gazing Globes” was the most public place Hayes has ever shown her work. While equally beautiful and evocative, these globes didn’t turn into a trend the way her living terrariums have. As it turns out, millennials don’t want a token of global warming in their homes. They want something to remind them that, even in the middle of an urban metropolis surrounded by pollution and computers, life is able to thrive in seemingly impossible conditions.
Kate Groetzinger
Related Stories