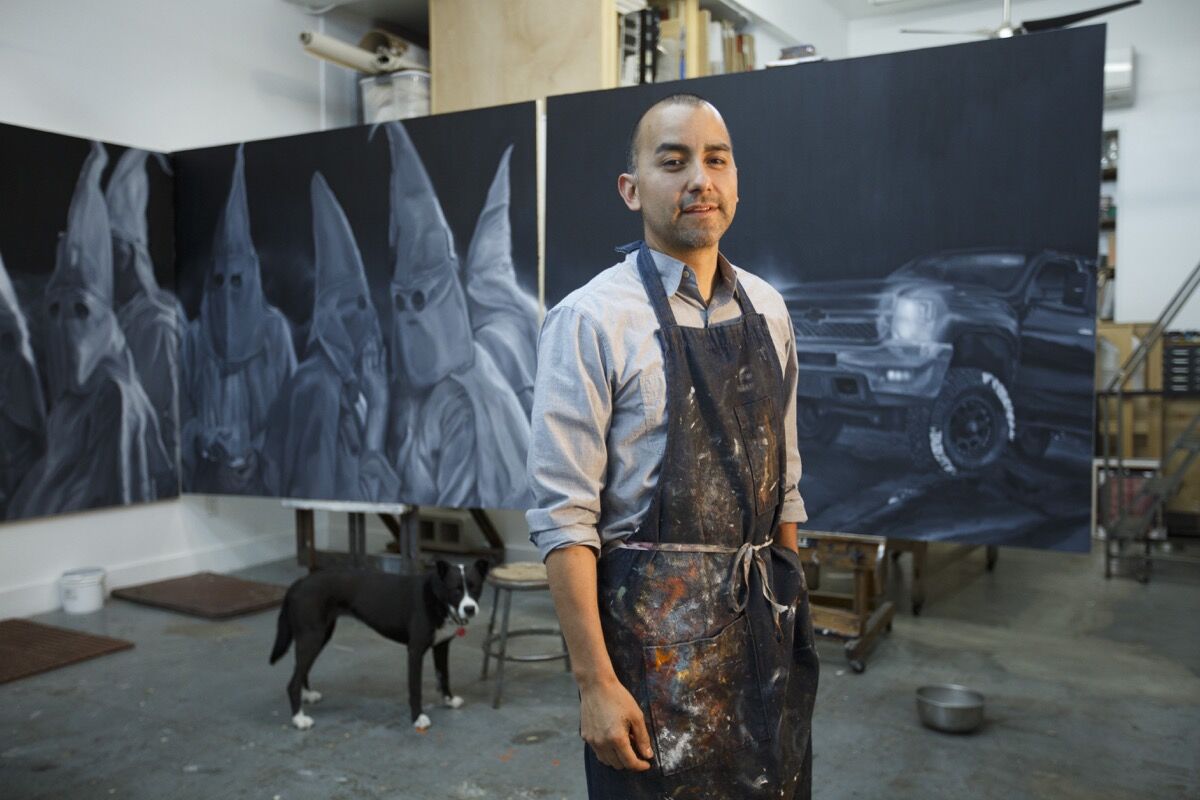 Vincent Valdez in his studio, 2016. © Michael Stravato. Courtesy of the Blanton Museum of Art.

In
Vincent Valdez
’s The City I (2015–16), evil is so banal that it uses a smartphone. The four panel, 30-foot-wide painting shows 14 hooded Ku Klux Klan members (including a baby wearing a Klan robe) gathered at nighttime, a glimmering city just beyond them. One holds a beer can and makes a “Heil Hitler” salute, while another wears a delicate bracelet. Beside them, we see a Chevy driving up the road with its lights on, illuminating a dog. Valdez rendered the scene in haunting black, white, and shades of gray, while the details suggest a distinctly 21st-century setting: This hate group might have assembled just last night.
“My intention was to shed light on an alarming topic that I felt I was witnessing outside my studio doors,” Texas-born and -based Valdez told Artsy. “Being Mexican-American in this country, it’s evident to me that there exists both overt and covert racism.” He believes that Americans haven’t yet reckoned with the depth of their prejudices and the country’s violent foundations.
The City I is the centerpiece of a solo exhibition of the artist’s paintings opening today at the Blanton Museum of Art at the University of Texas at Austin. Valdez will also show The City II (2016), which depicts a heap of rubble—and, according to the artist, symbolizes the state of American cities—as well as examples from his “The Strangest Fruit” series. The name alludes to a Billie Holiday song in which she croons: “Southern trees bear strange fruit / Blood on the leaves and blood at the root.”In Valdez’s painting, Latino men float across blank canvases, their bodies contorted as though they’ve just been hanged. (Valdez aimed to commemorate the lives of Mexican and Mexican-American men who were lynched throughout the country’s history.) But if the show offers portraits of both perpetrators and victims, it’s the former who get a lot more wall space. 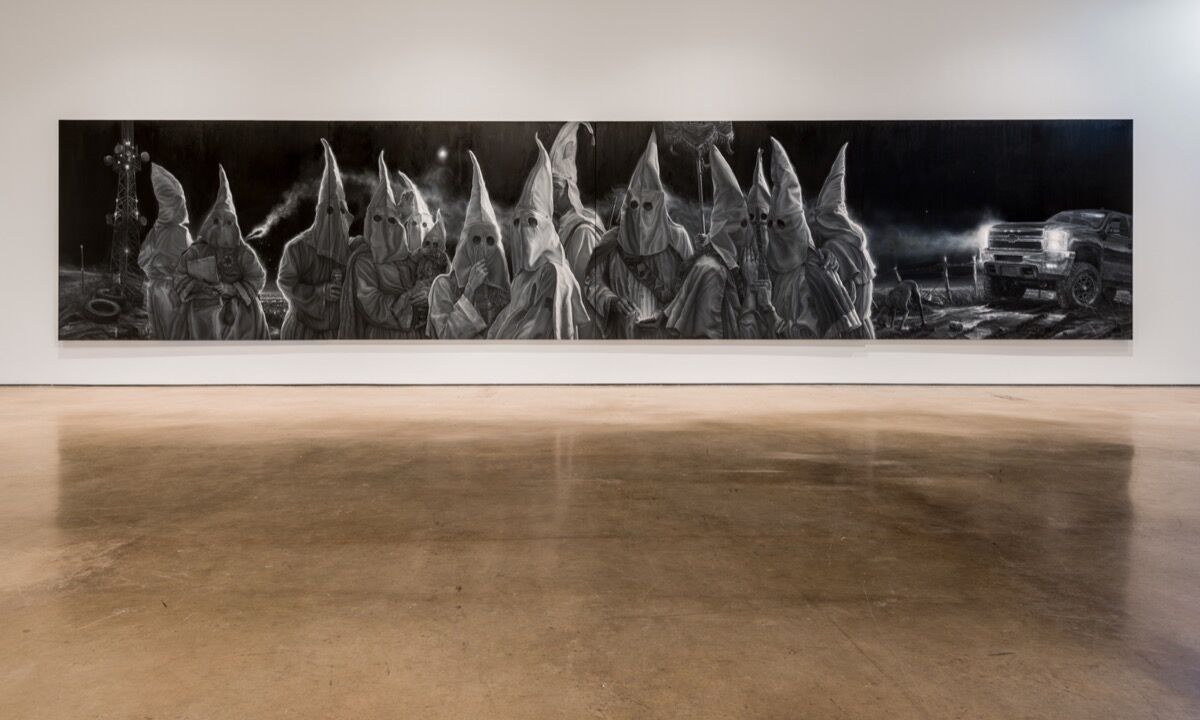 After a couple years of intense art-related protests—over
Dana Schutz
’s painting of Emmett Till at the Whitney Museum of American Art,
Sam Durant
’s Scaffold sculpture at the Walker Art Center, and others—the Blanton is eager to preempt as many complaints about these works as possible. The museum has developed an in-depth exhibition page, which includes eight chapters that attempt to answer any potentially damning questions a viewer might develop.
In fall 2017, the museum staged roundtables to discuss The City with faculty and community members drawn from a variety of disciplines and fields (from an assistant professor in the Department of African and African Diaspora Studies to the regional director of the Anti-Defamation League). And for the duration of the exhibition, the Blanton will host conversations between the museum’s staff and community members.
Blanton director Simone Wicha told Artsy that she and her staff are presenting the work as part of a larger effort to ensure that the museum honors “multiple voices and histories that haven’t been told.” She views the exhibition as both an attempt to show artists of diverse backgrounds in the museum, and as a means of inciting serious conversations about race on campus. 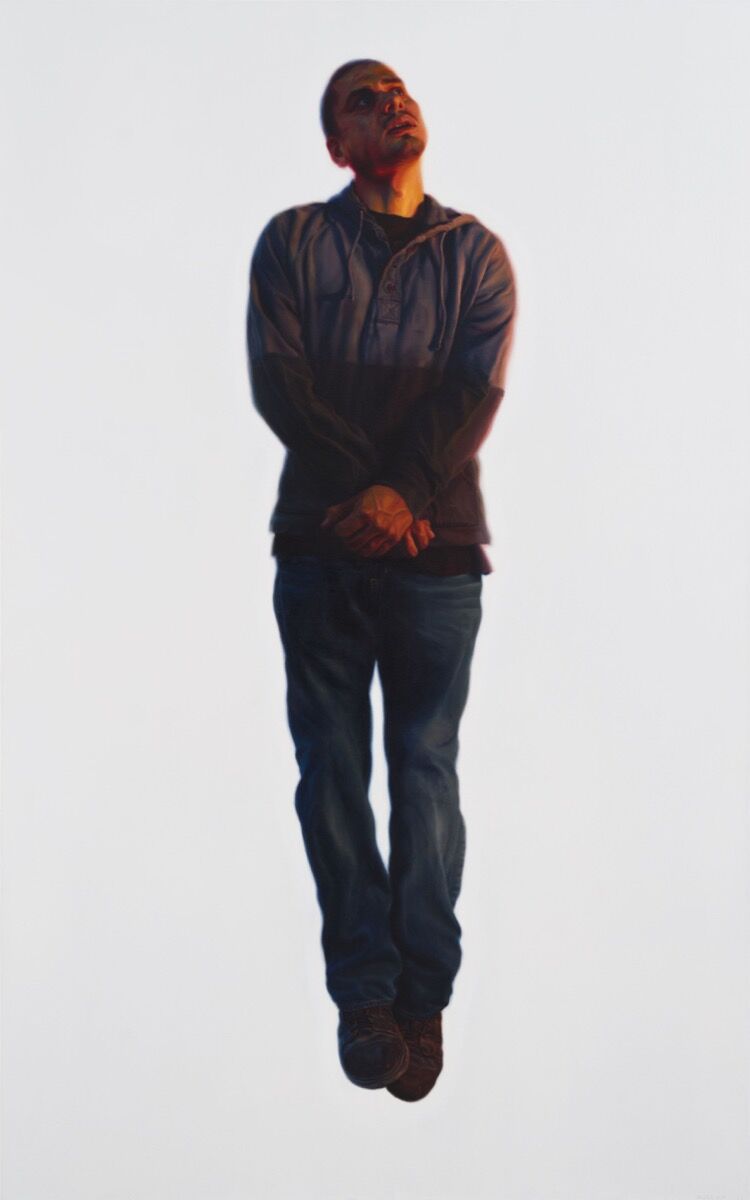 Vincent Valdez, Untitled, from the series “The Strangest Fruit,” 2013. © Vincent Valdez. Courtesy of the Blanton Museum of Art. 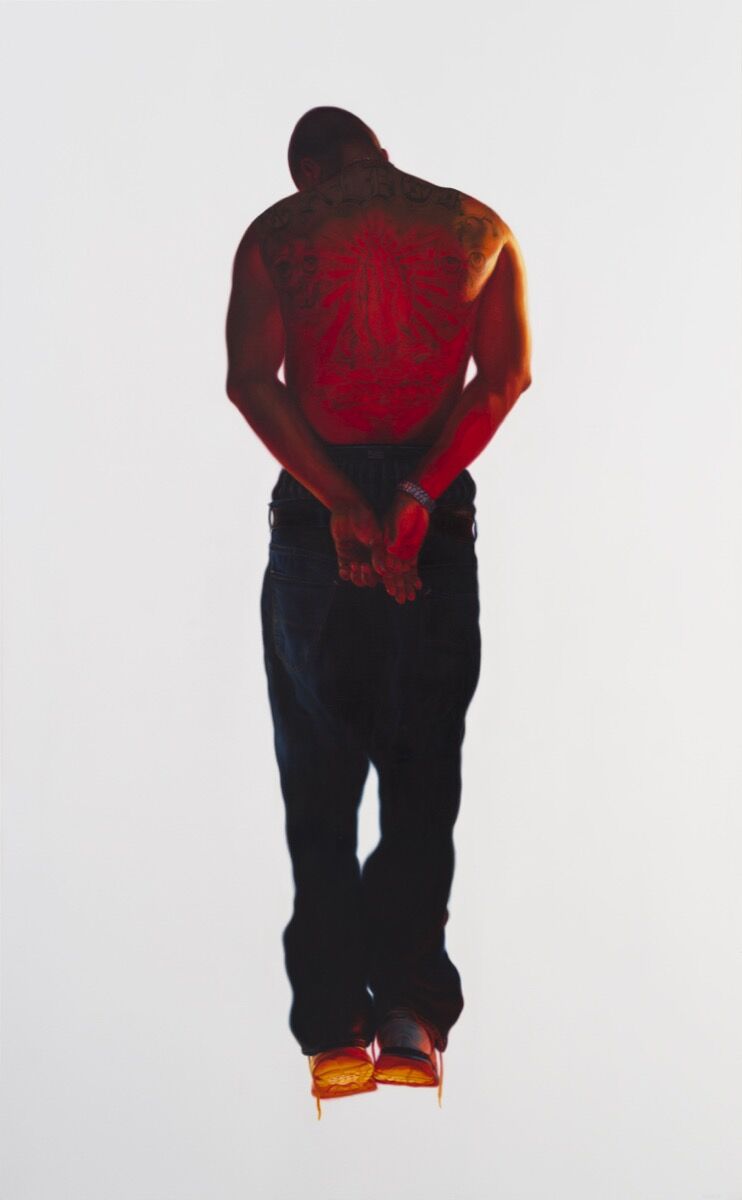 Vincent Valdez, Untitled, from the series “The Strangest Fruit,” 2013. © Vincent Valdez. Courtesy of the Blanton Museum of Art.

Advertisement
Valdez, of course, is not the first artist to select the Ku Klux Klan as subject matter.
Regionalist
artist
Thomas Hart Benton
depicted the white supremacist organization in a 1933 mural for Indiana University, in attempt to acknowledge and condemn the state’s history of racial violence. Last year, students lobbied for its removal, arguing that its presence in a lecture hall forced class attendees to look at such troubling images. (The painting stayed, but the university no longer hosts courses in the room.)
Norman Lewis
’s America the Beautiful (1960) depicts a procession of Klansmen against a stark black background. In the late 1960s,
Philip Guston
began painting the Klan in a grotesque, cartoonish style; in The Studio (1969), a hooded figure stands at an easel, suggesting Guston’s own sense of guilt and shame. In 1990,
Andres Serrano
—an artist of Honduran and Afro-Cuban descent—photographed Klan leaders hidden behind their regalia.
Though it just opened today, the show has already garnered strong sentiment online. One commenter on yesterday’s New York Times article about The City I wrote: “What we saw in Charlottesville was unvarnished [sic] and better serves Mr. Valdez’s point. I’m afraid the Blanton missed the mark here. This is no Guernica, no 3rd of May. Yawn.” In other words, the painting is far weaker than
Pablo Picasso
and
Francisco de Goya
’s politically-minded masterpieces—and much less galvanizing than the events that are now unfurling daily on television and throughout the media. 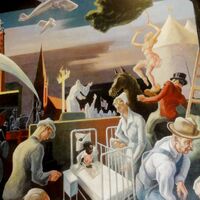 4 Images
View Slideshow
A subsequent commenter offered an opposing assessment, finding that the painting made too much of an impact: “I would avoid a museum that displayed such a painting,” they wrote. “Even the photograph in this article is too frightening for me and I would never want a child to see such a photograph or painting.”
Valdez, for his part, hopes viewers will consider just how strongly racial anxieties still plague the country. Militarizing the border and ripping apart families are today’s most damning evidence of Americans’ fears, he asserted. “I aim to bring an awareness into institutions that are sometimes considered safe spaces, somewhat sterile in their ability to confront and respond to the world,” Valdez said.
Alina Cohen
Cover image: Vincent Valdez in his studio, 2016. © Michael Stravato. Courtesy of the Blanton Museum of Art.
Related Stories