In Thailand, a Buddhist Artist Is Building the Bizarre Temple of His Dreams Of the more than 30,000 temples in Thailand, the White Temple may not be one of the most wondrous, but is certainly the most bizarre.
Located 15 kilometers south of the city of Chiang Rai, the Buddhist temple is the shimmering masterwork of Thai artist Chalermchai Kositpipat, who began building it in 1997. Crafted from plaster, but resembling an otherworldly confection created with royal icing, the White Temple is a work in progress that could take another 50 years to complete.
As it stands today, the centerpiece is the main hall, an ivory-white building embedded with small mirrors—its color, to represent purity and the mirrors, a symbol of Buddha’s shining wisdom. It sits behind a sweeping bridge that’s flanked by two titanic demons that protect the temple’s entrance. Below, hundreds of stucco hands reach up to passersby as they cross; some clutch empty bowls, all are gnarled in agony, as if transported from a
Bosch
painting. In addition to the ornate ubosot, or main ordination hall, the sanctuary contains a crematorium and a lavish bathroom building covered from floor to ceiling in gold leaf. 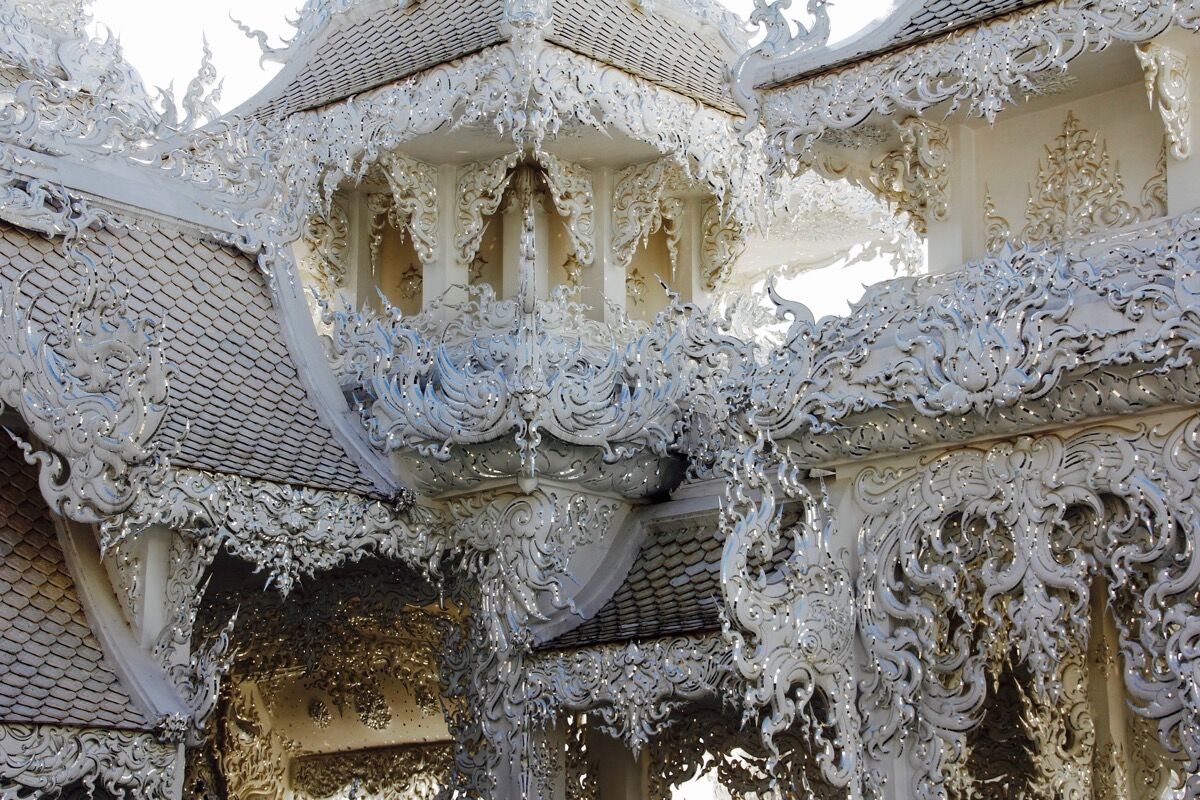 Known locally as Wat Rong Khun, the White Temple is a testament to Kositpipat’s devout Buddhism, though also a reflection of the unconventional ways that localized religious traditions can mesh with hyper-modern, global culture.
Walking through the gardens, which sprawl over more than six acres, it’s easy to feel lost in some remote outpost. But in reality, you’re never more than a few blocks over from cafés and gift shops. Mopeds and buses that traffic the bordering highway can be heard from the chapel’s entrance.
It comes as some surprise, then, that despite the bustle, Wat Rong Khun serves as a functioning monastery. Visitors are likely to see monks clad in orange robes passing among the hundreds of camera-toting tourists each day.
Each of the existing three buildings—the artist intends to build nine, in all—is filled inside out with with detailed ornamentation and an uncanny mix of imagery from both traditional Thai art and pop culture. Among the manicured lawns, a mask of Pinhead from the Hellraiser movies is impaled on a post. Inside the halls, a mural depicts Po from Kung Fu Panda and Spiderman fighting in an apocalyptic war, while the Twin Towers fall behind them. 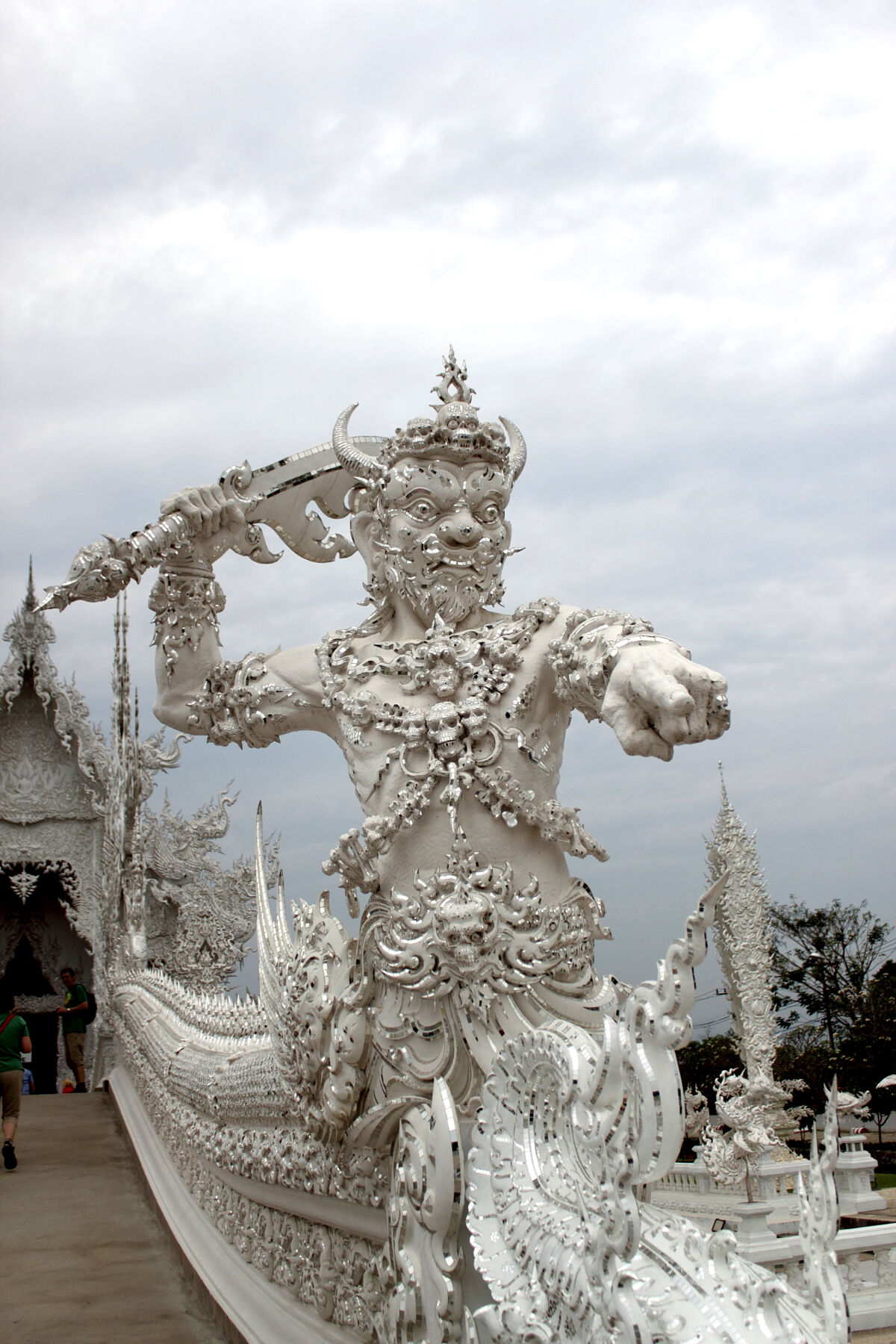 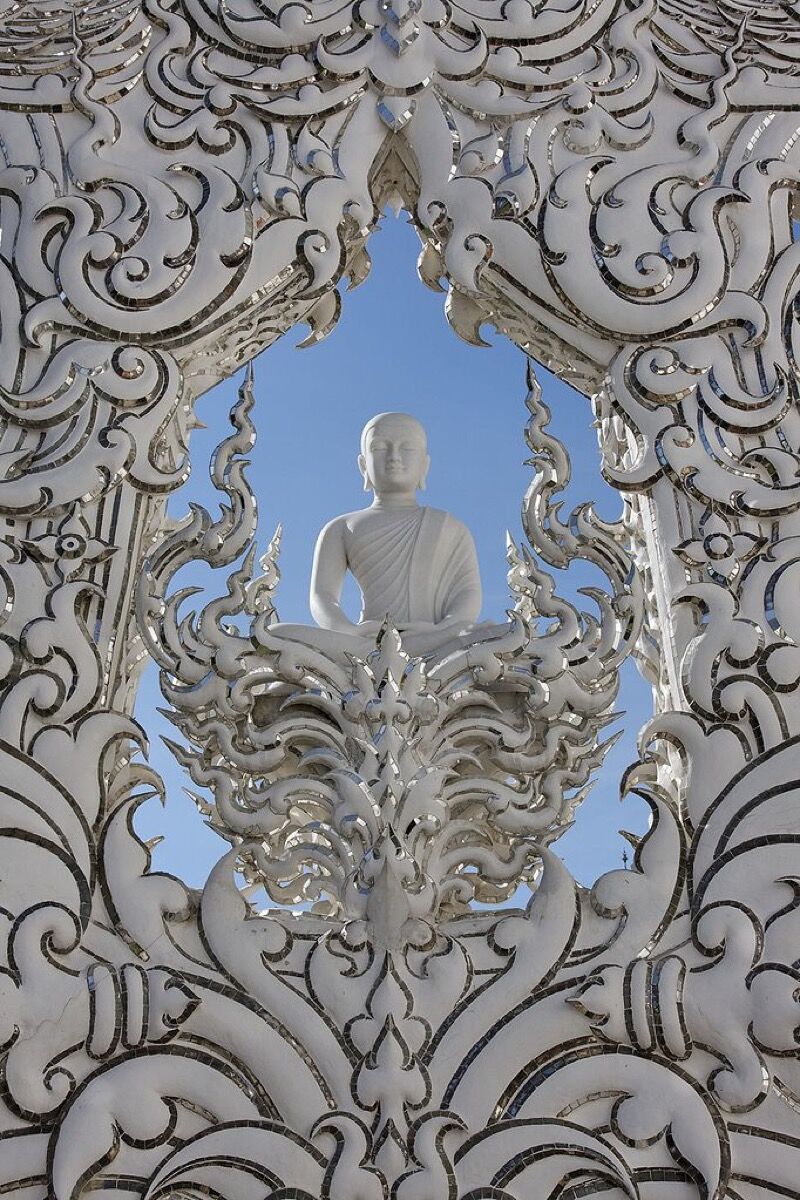 Advertisement
As offbeat as some of the more modern imagery may seem, there is still a clear foundation in Thai art. The three-tiered roofs of the sanctuary’s buildings are typical of Northern Thai architecture. Statues of Kinnara, the benevolent half-human, half-bird creatures that feature in Buddhist mythology, and Naga, the giant serpent that sheltered the meditating Buddha from torrential rains, dot the grounds. Elsewhere, masks of anguished faces that hang from tangles of Spanish moss reflect cycles of dukkha, or suffering, that must be surpassed to achieve enlightenment.
Such a massive project has only come together thanks to immense resources, manpower, and dedication. A team of 120 volunteer artists, architects, and builders have been working to bring Kositpipat’s vision to fruition. To fund construction, Kositpipat has paid 40 million baht ($1.2 million) out of pocket. Admission is only B50 (the equivalent of a dollar and change) and donations are capped at B10,000 ($300) to avoid the influence of large donors.
Notably, Wat Rong Khun does not receive government funding. The controversial nature of Kositpipat’s imagery has been known to rile some in the country’s religious community. From 1988 to 1992, he helped complete a series of murals for London’s Wat Buddhapadipa, the first Thai Buddhist temple in the U.K. The murals include depictions of world leaders, including Ronald Reagan, as soldiers in the demon Mara’s war with Buddha.
“I got complaints from everybody—from the [Bangkok] government, from monks and from other artists, saying that what I was doing was not Thai art,” he told CNN in 1998. 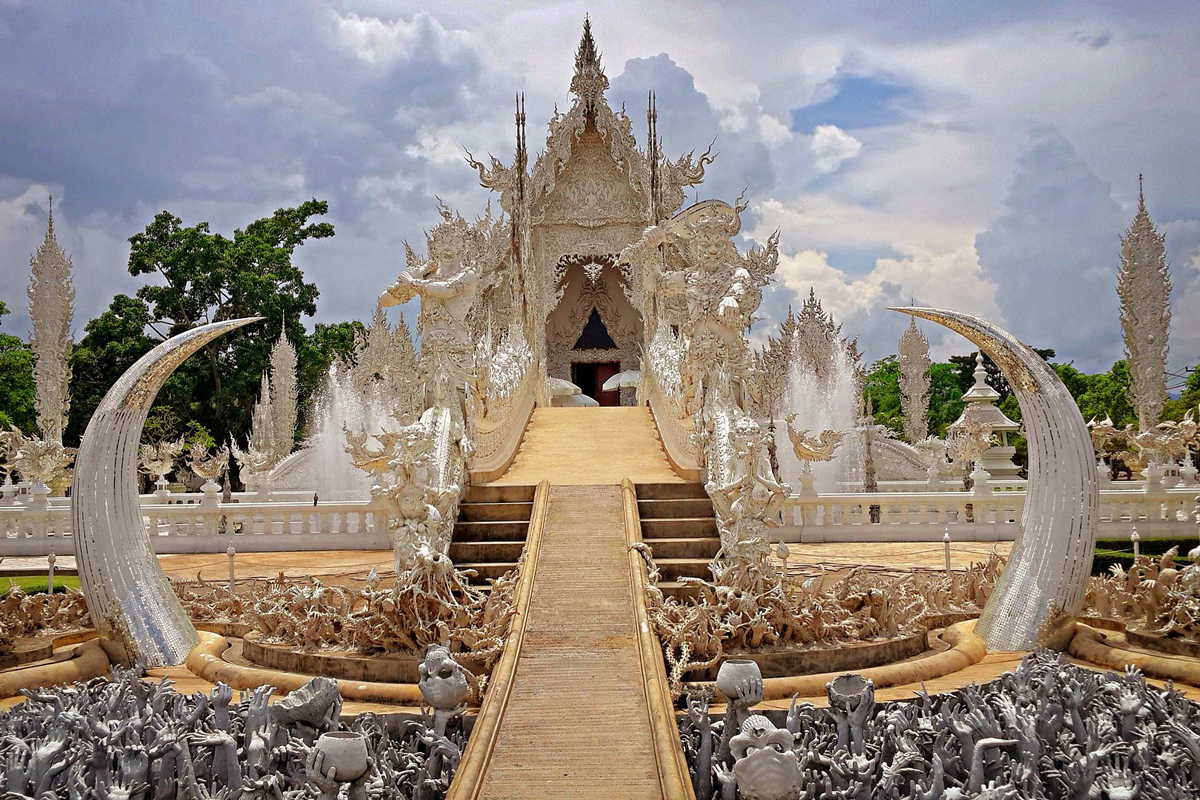 Kositpipat has built a reputation for his outsized personality as much as for his unconventional take on traditional art. Visitors to The White Temple can take pictures posing with a cardboard cutout of the artist. Once, when asked by an interviewer of his favorite work, he replied through a wide smile, “If I don’t like it, I don’t make it. That’s why I love everything done by me.”
Despite his boastful personality though, Kositpipat, now 62, still meditates daily. He’s openly expressed hopes that his work will provide a beacon for Buddhists worldwide to explore their spiritual practice. “The White Temple will continue to be built even after I die,” he said in an interview. “The White Temple is my life’s work, my purpose in life, my contribution to the world. I want to make gorgeous art for this world, for everybody to come here and feel it’s beautiful, impressive, gorgeous. To admire.”
Mitch Sawyer
Related Stories