Artsy Editors
Oct 22, 2015 6:35pm
FIAC opened in Paris on Wednesday with 162 galleries offering a wide range of presentations, from tightly curated group exhibitions to solo shows of emerging talents from the Continent and beyond. We scoured the fair’s booths to pick out the 10 you shouldn’t miss. 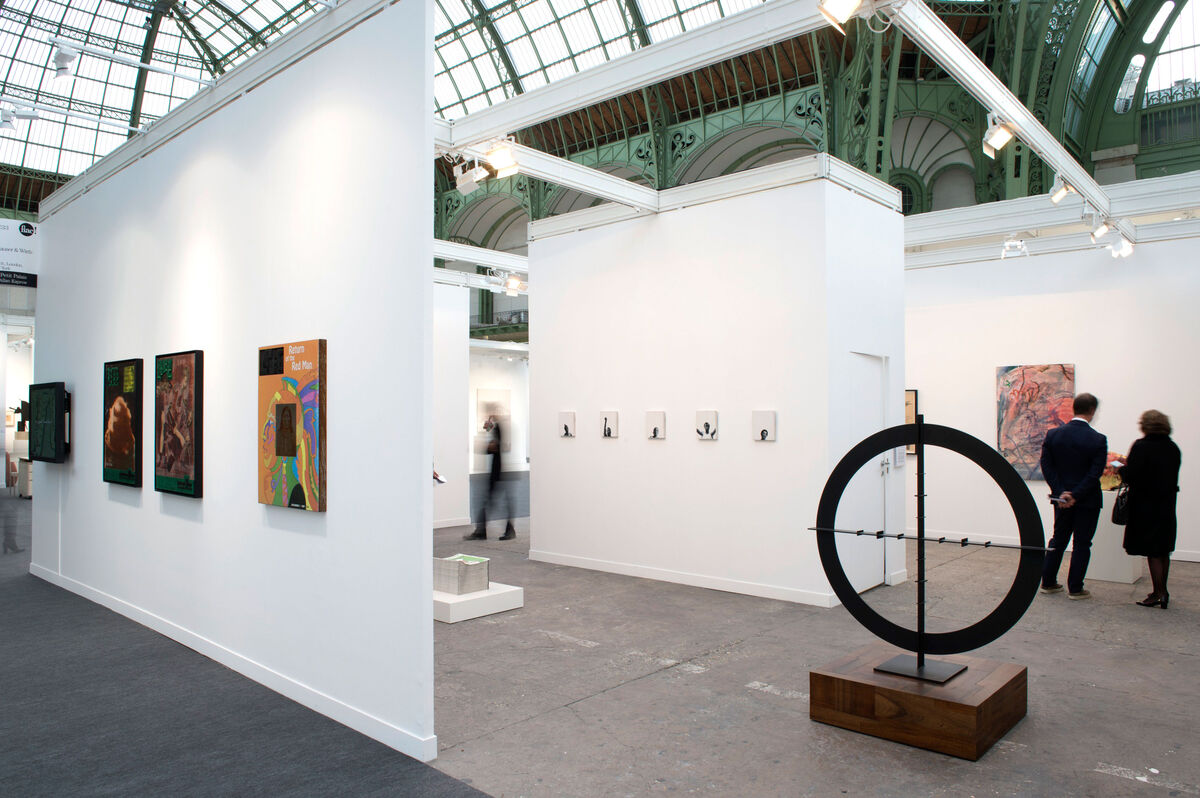 WHY YOU SHOULD STOP

Gallery co-presidents Iwan and Manuela Wirth were named #1 on ArtReview’s annual Power 100 survey this morning, making them only the second commercial gallerists—along with Gagosian—to hold the top spot. The recognition no doubt stems from Hauser & Wirth’s boundary-pushing emphasis on curating institutional-quality shows in its spaces worldwide. They’ve extended that practice to art fairs, too, as evidenced by their FIAC presentation. Mounted by former MOCA L.A. chief curator-cum-Hauser & Wirth partner Paul Schimmel, the show quietly reflects back on the January terrorist attack against Parisian satirical newspaper Charlie Hebdo.
“As soon as it came out, I knew that this was something that I wanted to do and I asked a member of our staff to go and acquire these issues right off the newsstand,” says Schimmel of the exhibition’s central stack of Charlie Hebdo’s January 14th issue, which depicted the Prophet Mohammed holding one of the “Je Suis Charlie” signs that became a calling card of support for the slain staffers. “It was a political assassination of artists,” Schimmel adds of the attacks. “Throughout the history of art, artists have been incarcerated, killed, and, maybe most tragically, made unable to speak.” 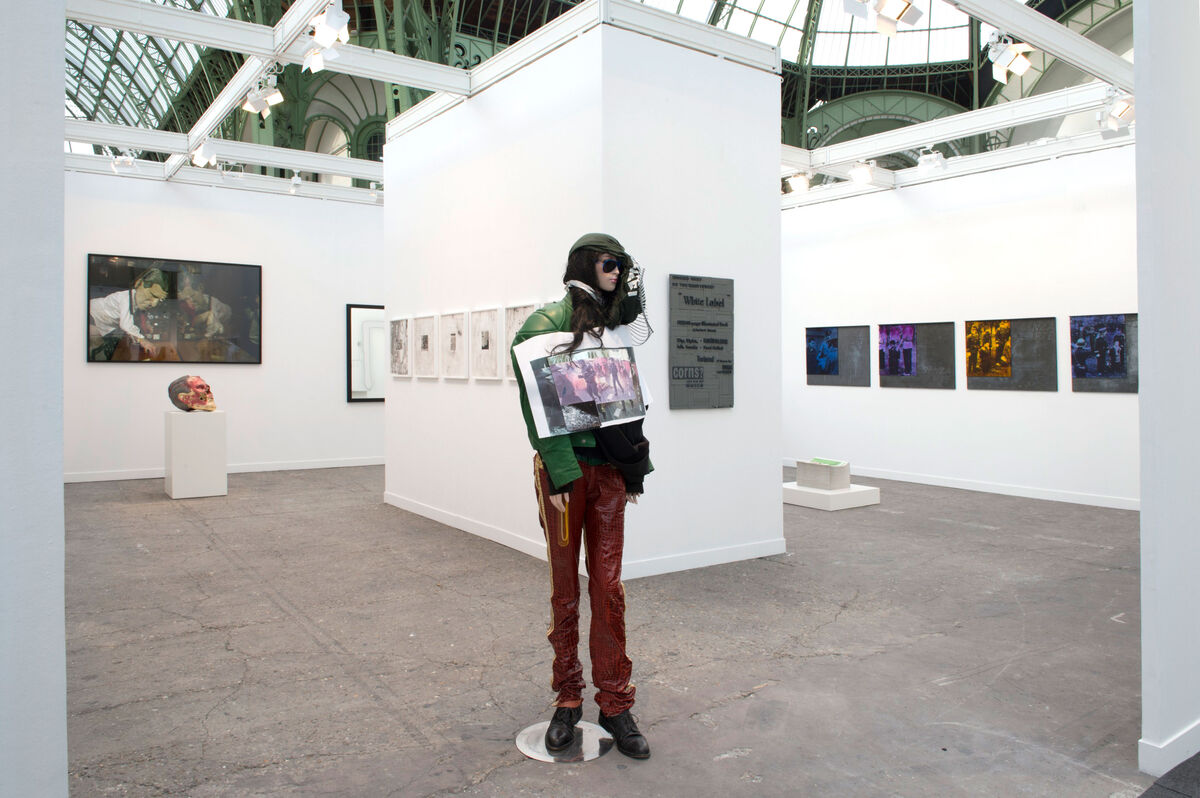 Advertisement
The artists he chose from the gallery’s stable aren’t necessarily ones you might initially associate with radical or even political work. But from
Leon Golub
’s works in protest of the Vietnam War to works by
Paul McCarthy
that confront America’s George Bush years and the war in Iraq, the resonance is very real. McCarthy’s piece as well as a sculpture by
Isa Genzken
, which portrays her days as a student revolutionary, were the starting point of the show.
Though Schimmel says he enjoyed rifling through the gallery’s holdings as he has with museum collections in the past, the most important point of the show is its having been “organized without a commercial venue as its primary goal… We are in a wonderfully creative period where private foundations do exhibitions, museums commission new work, and galleries can do historical exhibitions that are museological in nature,” the curator adds. Museological indeed—the booth is is among FIAC’s least eye-grabbing, hanging its hat instead on quality and content. “It’s good to bring nuance to art,” says Schimmel. Agreed. 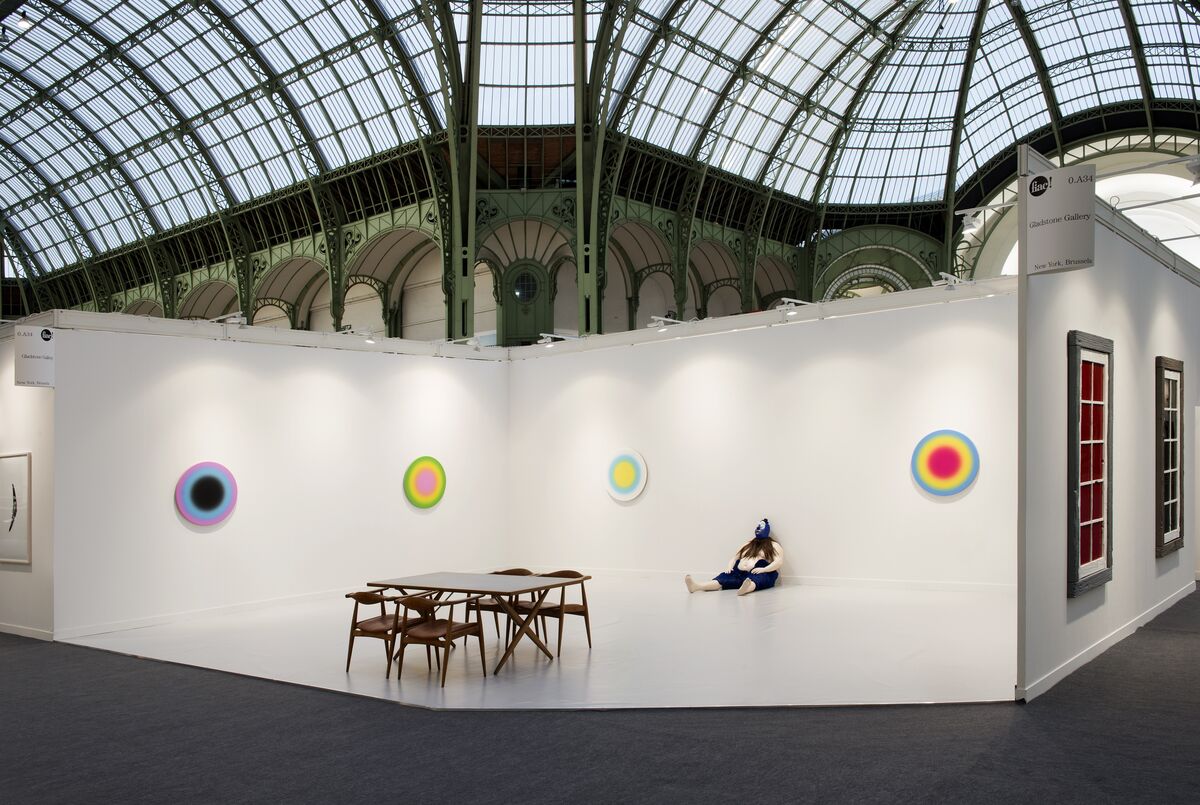 Centered on
Ugo Rondinone
’s 2000 clown sculpture If there were anywhere but desert. Monday, the welcomely sparse solo also features a selection of target paintings and window works, in celebration of the artist’s current show at the Palais de Tokyo, “I ♥ JOHN GIORNO.” Conceived as an artwork in and of itself, the exhibition reprises the work of New York underground art hero (and Rondinone’s partner)
Giorno
, also including works by
Angela Bulloch
,
Matthew Higgs
,
Pierre Huyghe
,
Elizabeth Peyton
, Michael Stipe,
Rirkrit Tiravanija
, and
Andy Warhol
, among others. 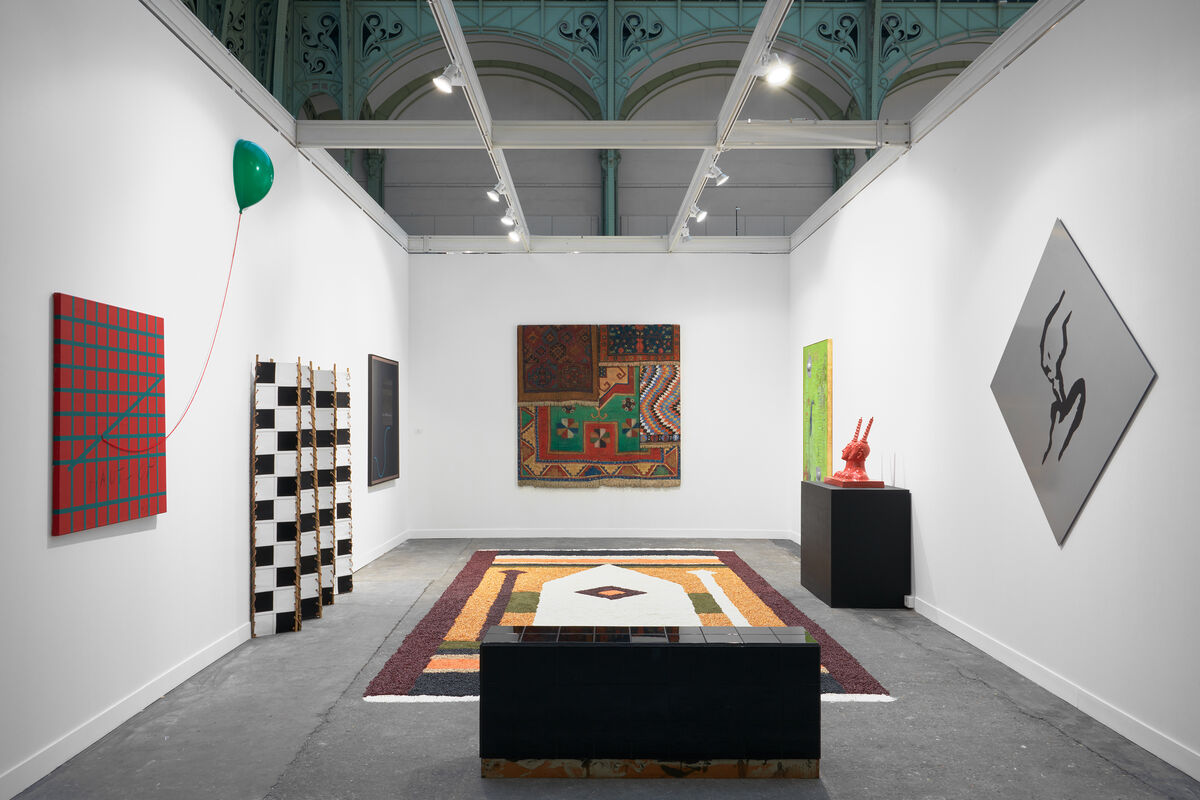 The late Turin-born, Paris-based artist
Aldo Mondino
’s Raccolto in preghiera (1986)—a 13-foot-long prayer rug made from various colored beans, lentils, rice, corn, and flour—takes up the majority of the booth’s floor space. Though close with Arte Povera bigwigs like
Alighiero e Boetti
, Mondino was “always a bit on the side of the movement,” according to director Margherita Belaief. “He was a little bit too eclectic.” Bortolozzi also shows a painting from 1965 by the artist. 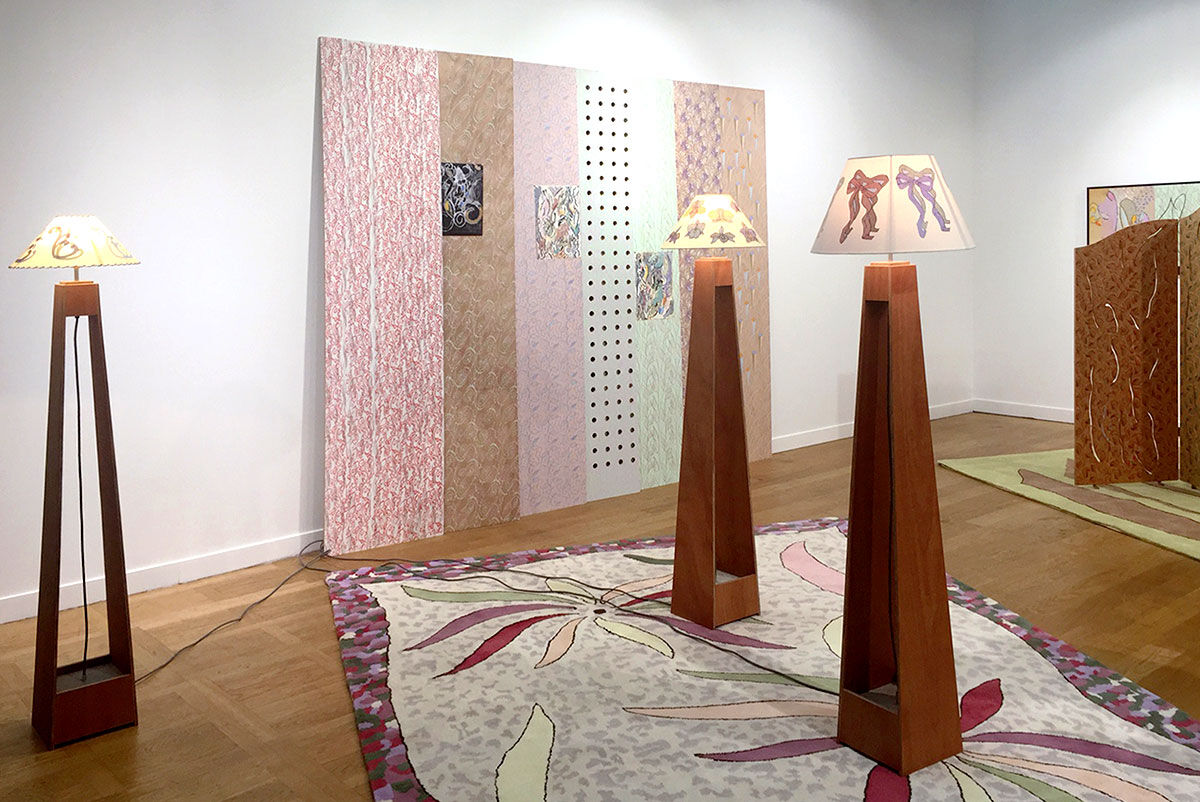 Marc Camille Chaimowicz
has a knack for creating supremely pleasant—and whimsical—environments and his solo booth with Kreps is no exception. Comprising wallpapered dressing screens, rugs, paintings, and furniture with motifs ranging from ice cream cones and roses to pages pulled from French literature, the presentation plumbs the space between design and art while recalling a set on which one of the artist’s notable performances might well be played out. 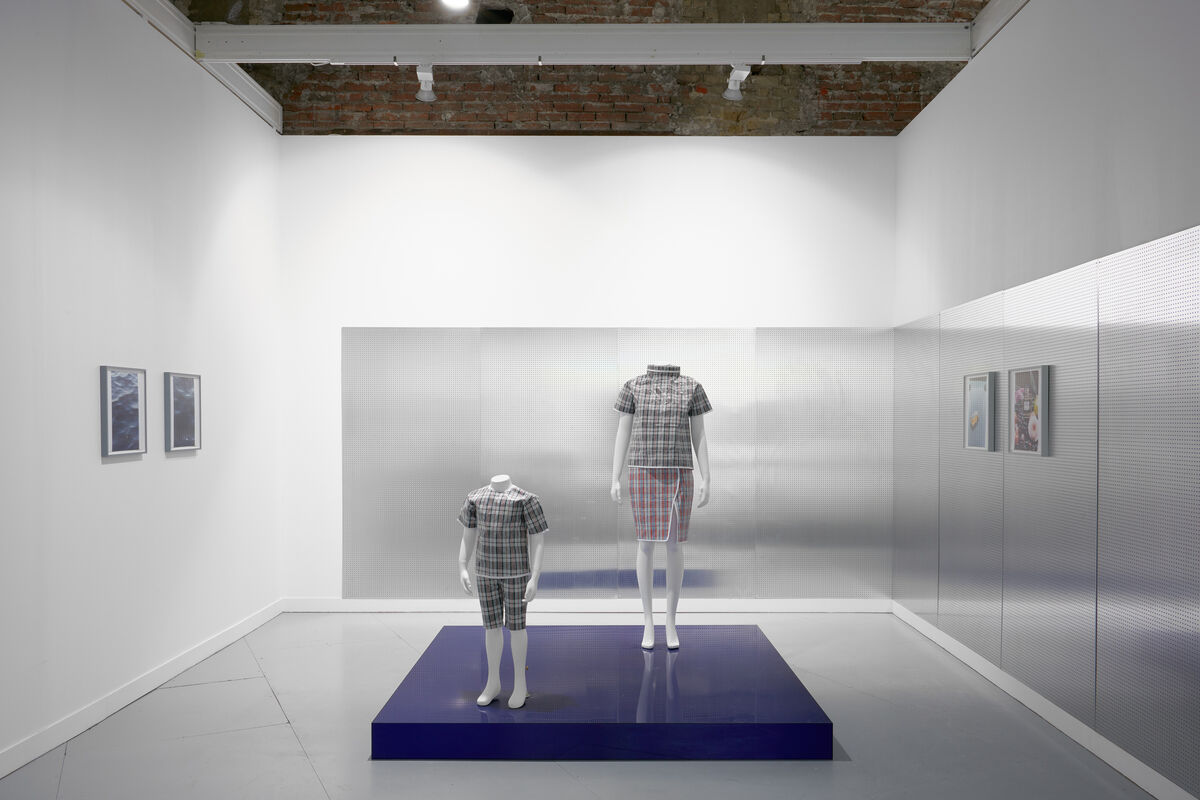 The 27-year-old Berlin-based Vietnamese artist Sung Tieu’s central installation, Alien Refugee Collection (2015), was sparked by fashion label Céline’s appropriation (in fabric) of the woven plastic bags most typically seen being carried by refugees. It hits hard both for its timely reference to the refugee crisis across Europe and its nuanced reflection on the way immigrants take on and contribute to the culture of their new homes. “Do you have anything smaller?” asks a collector of Rosemarie Schwarzwälder, gesturing to the 20-foot-long, 12-foot-tall monster of a canvas by artist-of-the-moment
Katharina Grosse
that anchors the booth. It’s flanked by two cast-puddle works by
Daniel Knorr
—one impression taken from the Pont Neuf and one from Pigalle, in a gesture meant to juxtapose Paris’s favorite locale for lovers with its place for purchasing one temporarily. “I woke up with a flash of what the booth could look like in the middle of the night and called Katharina immediately,” says Schwarzwälder. Where curb appeal is concerned, the booth is hard to beat. Should the red velvet stage curtain that conceals Brown’s booth be closed when you pass by, don’t be discouraged. Soon enough it will glide open (as it did while the New York dealer motioned, as if controlling it telepathically, to welcome Stedelijk Museum director Beatrix Ruf to the stand when I arrived) to reveal a sumptuous salon-style hang of works by
Martin Creed
,
Ella Kruglyanskaya
, and Nick Relph, with two small rooms on either side of its central room allowing for more focused viewing of the rest.

Venice Biennale favorite
Pamela Rosenkranz
shows two works smearing blown-up Bellini paintings with the average-European-skin-tone pigment she developed for her pool in the Swiss Pavilion. Meanwhile,
Mélanie Matranga
(who currently has a solo up at the Palais de Tokyo) shows silicone casts of Parisian ceiling friezes and a glue-encased double bed—sheets, pillows, and all. 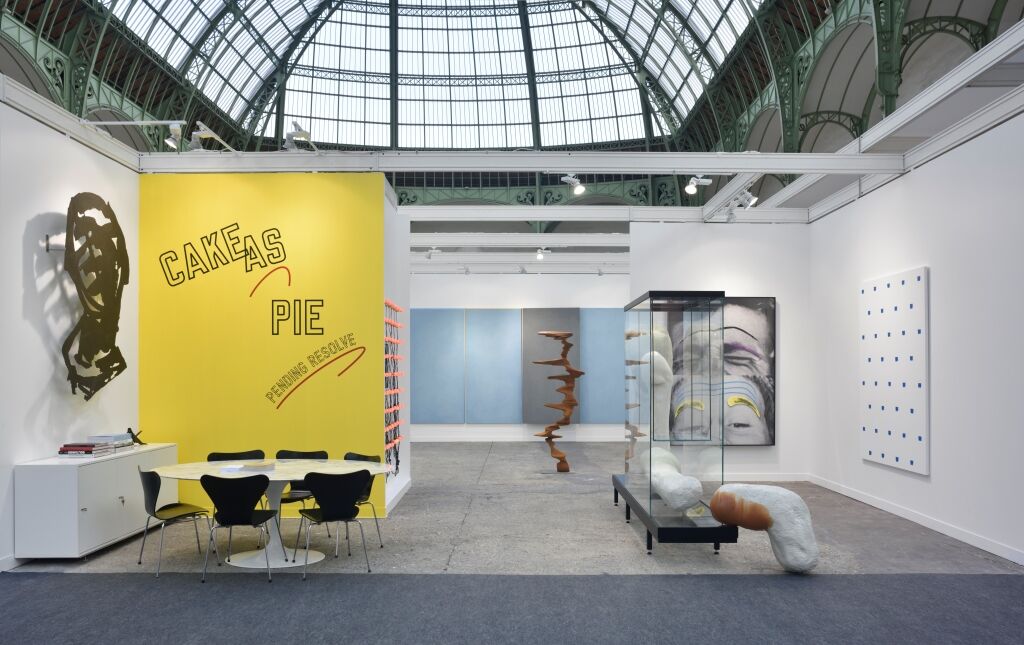 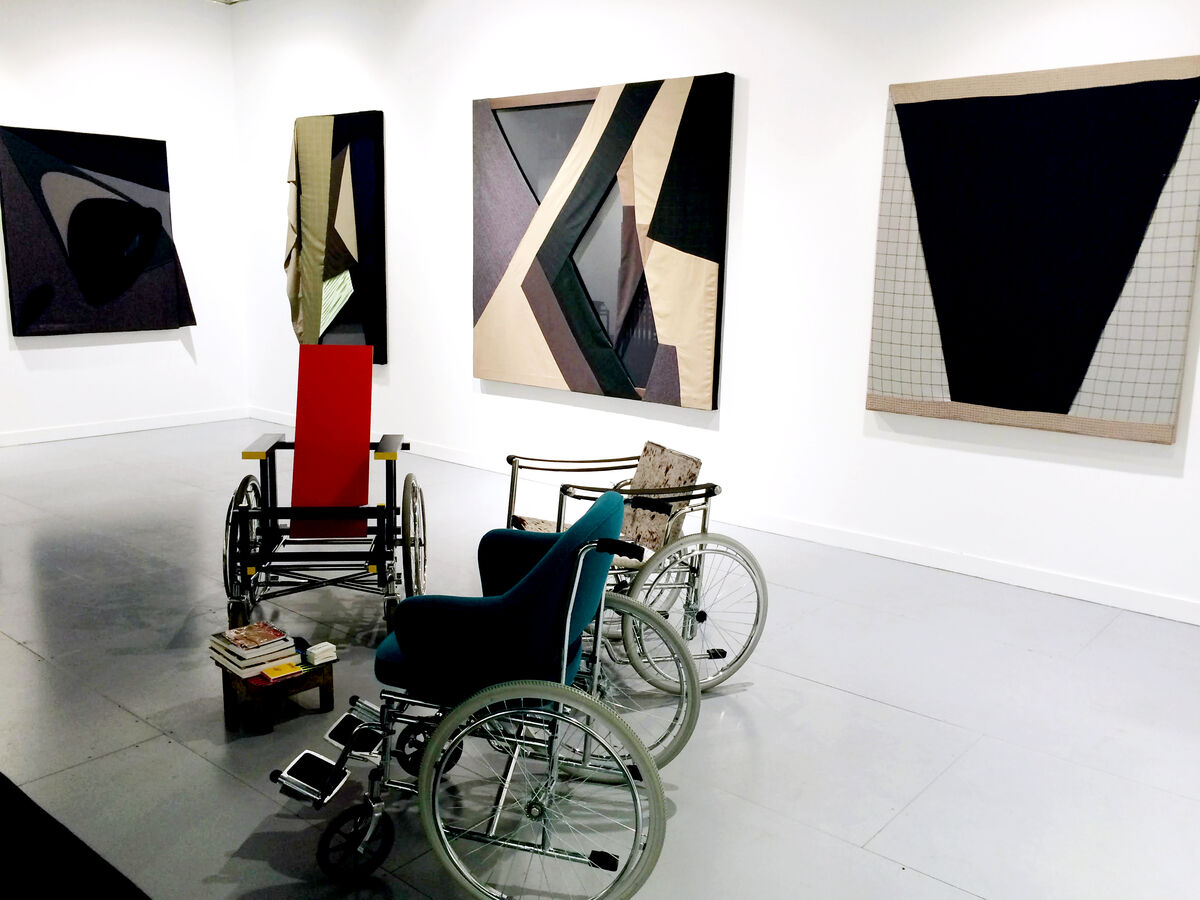 Seven portraits hang in this presentation of the Rio-based artist
Laura Lima
’s work. But rather than the pseudo-surrealist figuration that’s been flooding the scene of late, Lima works with tailors to create stretcher-bound suits to represent her subjects. The works are shown alongside a series of wheelchairs that Lima created, based off of famous designs by
Le Corbusier
and
Gerrit Rietveld
, among others.
—Alexander Forbes
FIAC is on view in Paris from Oct. 22–26, 2015.
Related Stories