The 10 Best Booths at ZsONA MACO

Artsy Editors
Feb 4, 2016 9:08am
Mexico City was stamped as the number one place to visit in 2016. And based on the throngs of smiling collectors who spilled into ZsONA MACO on Wednesday morning and equally ecstatic gallerists gushing, “this is my favorite fair”—it appears the art world would agree. For the fair’s 13th edition, 123 galleries from 25 countries are spread across a single floor of the Centro Banamex. And though the fair is among Latin America’s most international, the presence of local galleries—and challenging work by Mexican artists—was undeniably strong. Here are the 10 booths, with galleries hailing from Los Angeles to Guadalajara to Mexico City itself that make a trip to the DF well worth it.

Surely one of the fair’s most eye-catching booths belongs, jointly, to Berlin dealers alexander levy and DITTRICH & SCHLECHTRIEM, who’ve teamed up for a second time at the fair. The booth was designed by German minimalist painter
Klaus Jörres
whose black-and-white floor-work serves as its focal point. And it opens with
Julian Charriére
’s black-and-white double exposure, shot on a former soviet nuclear weapons test site in Kazakhstan. But it’s the twentysomething Swiss artist’s brand new work, Metamorphisme, that steals the show. “He created fossils of the future,” says André Schlechtriem of the work, made from lava mixed with old computer motherboards and USB sticks. According to Schlechtriem, Charriére made piles of “electrotrash” and covered it with liquid stone before slicing the formed rocks to the pieces that hang vertically in the booth’s center.

With works by Debora Delmar Corp 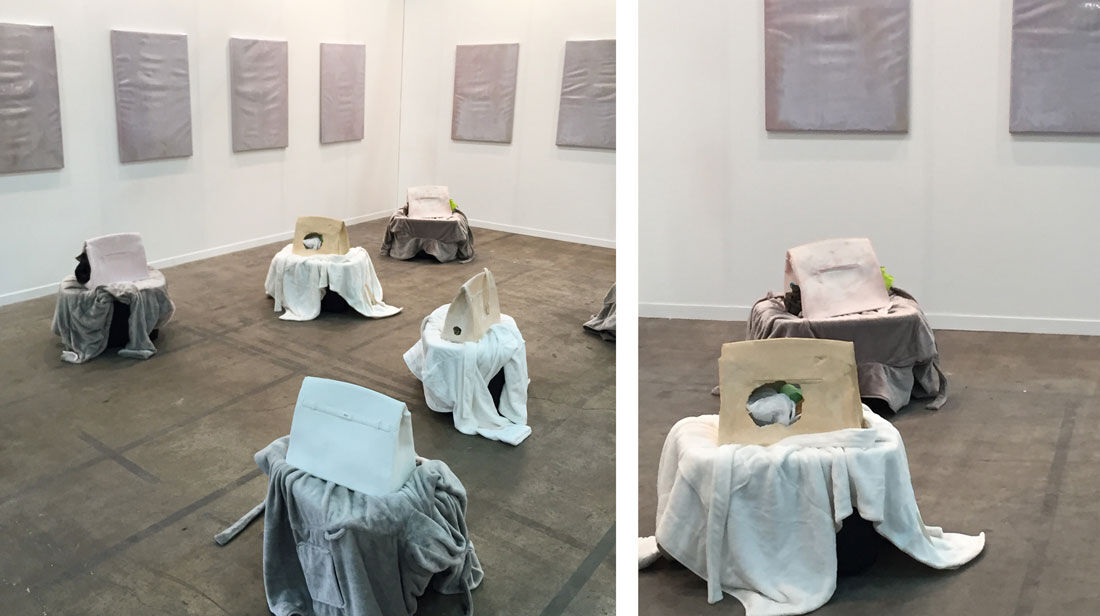 Advertisement
Last year at ZsONA MACO, at DUVE Berlin’s booth, young Mexican artist Debora Delmar (who shows under the moniker
Debora Delmar Corp
) offered up her personal “D D” logo to any collector willing to purchase—and permanently brand themselves—with a double-D tattoo. This year, she’s again made her presence felt at the fair in both a duo booth with DUVE (where she shows alongside
Ivan Comas
) and a solo booth with ltd los angeles. I caught her lingering among brand new work—knock-off Birkin bags dyed with powdered Mexican juice extract—at the latter’s booth. Though Delmar stumbled across the faux bags at a market in Los Angeles, the work has strong ties to her cultural heritage. “In Mexico, you find a lot of this knock-off clothing,” says the artist. “It becomes a symbol of status and you wear it to pretend to be in this social class, but it’s known that it’s not real. It’s a simulacrum of this identity.” The Birkins have been arranged throughout the booth based on stock images of luxury goods in living rooms, reflecting her research into the psychology of buying. “Curatorially, we’ve gotten a lot of reaction,” says director Shirley Morales of the work, which sells for $6,000–$7,000. “People are really into it.” By design, you might say.

With works by Xavier Veilhan 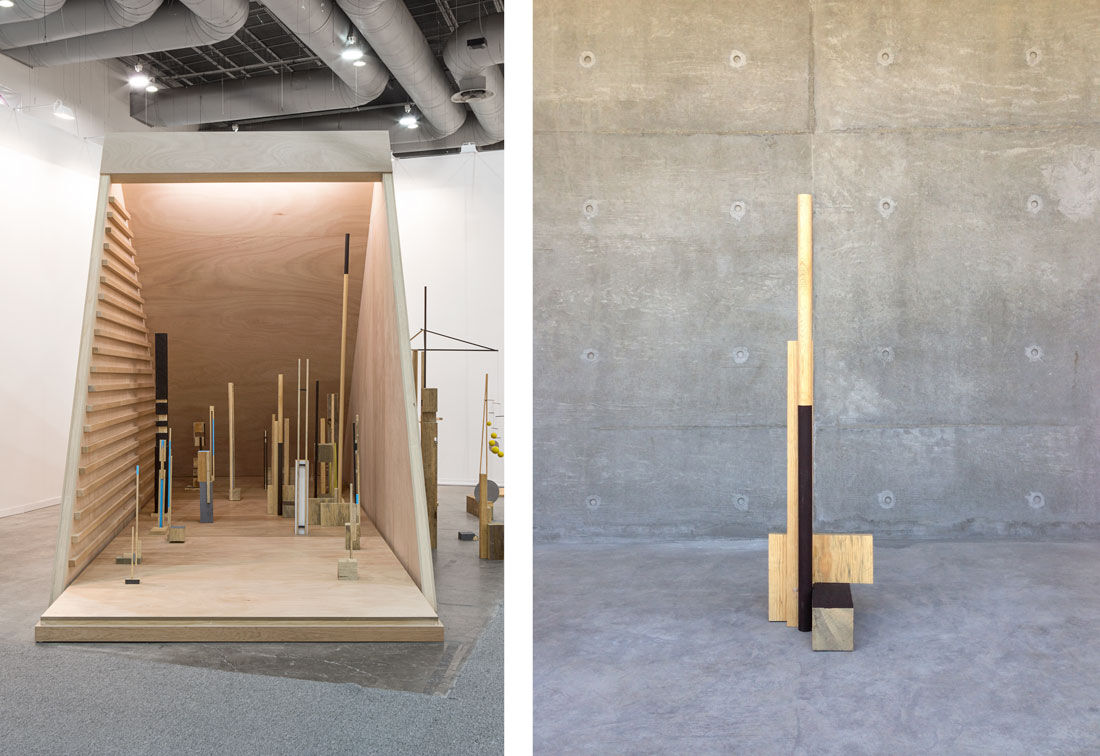 In the ’70s, seven artists created the garden of concrete sculptures known as Mexico City’s Espacio Escultórico. During a recent residency at Fundacion Casa Wabi in Puerto Escondido, Mexico, Paris-based artist
Xavier Veilhan
built a stone replica of one of the monuments, filling it with handmade, wooden-and-stone works that lure the viewer to climb inside. (You can’t. I tried.) “He usually works with machine-made sculptures, so this is very new work,” says Andréhn-Schiptjenko director Ebba von Beetzen. Espacio Escultórico, which has long held the artist’s attention, relates to Veilhan’s ongoing project “Architectones,” in which he makes site-specific pieces for iconic architectural buildings, including
Le Corbusier
’s Cité radieuse in Marseille and Mies van der Rohe’s German pavilion in Barcelona. 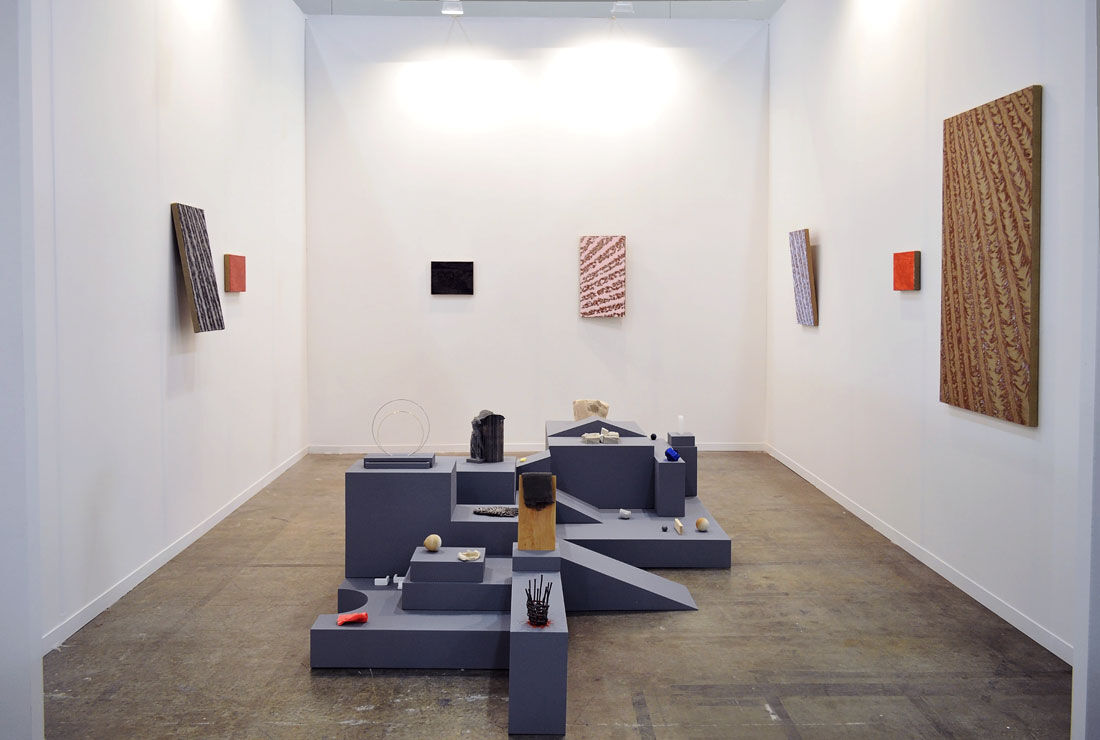 Strips of iron woven like sweaters, wax imprinted with bite marks, and memory foam holding the shape of the artist’s belly button are among the peculiar bric-a-brac adorning the sculptural centerpiece of, Guadalajara-based, Páramo’s booth. “Every piece has a personal meaning for her,” says the gallery’s Paulina Flores Toscano, motioning to a spool of string comprised of the Brooklyn artist,
Barb Smith’s
, unraveled clothing. (The sculpture separates into three pieces, priced from $12,000–$15,000.) The surrounding walls are lined with work by another New York-based artist,
Ezra Tessler
, whose paintings after Delacroix, embellished with clay and priced between $200–$7,500, jut out from the walls in the artist’s effort to integrate into the atmosphere of the room. 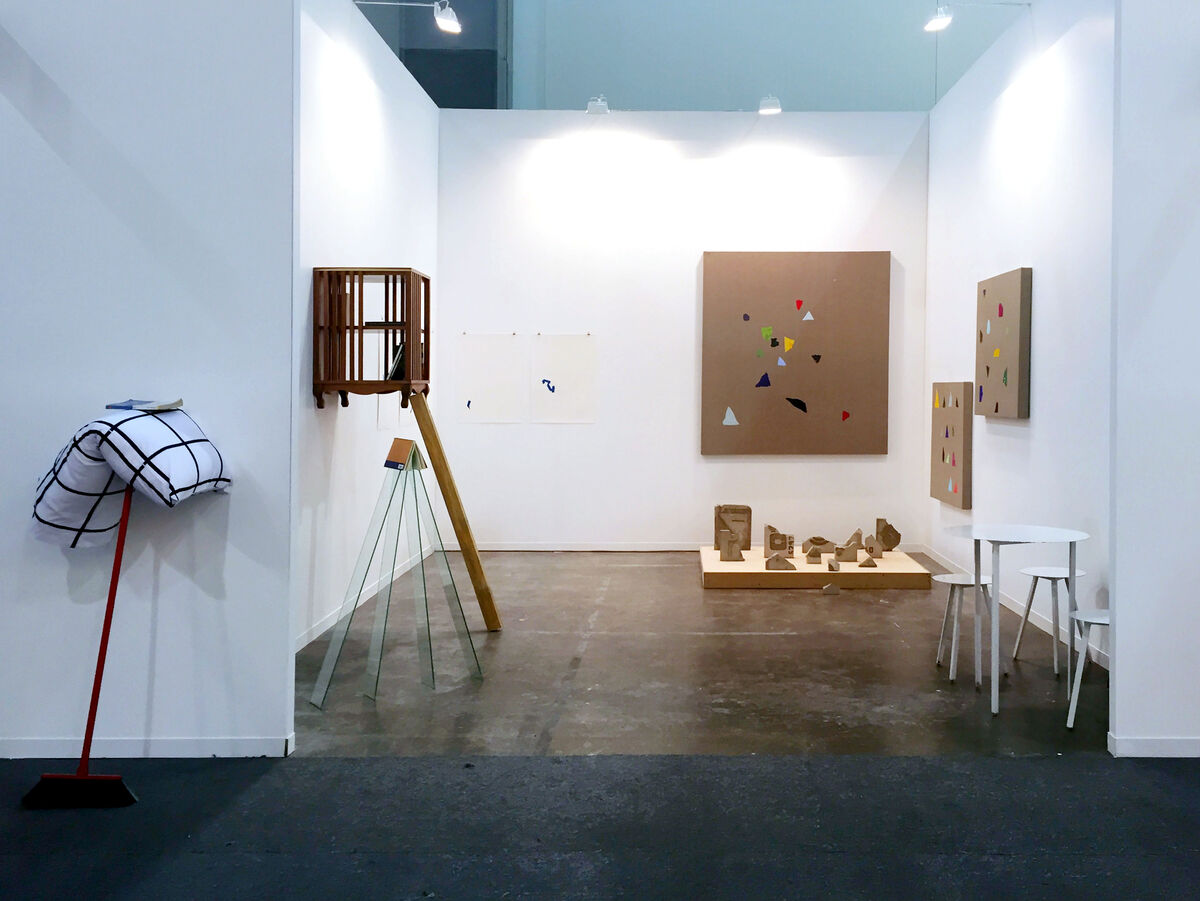 Work by 30-year-old Cartagena-born artist
José Olano
—precarious structures leaning against booth walls—is the highlight of Panama-based DiabloRosso gallery’s presentation. “He works with everyday objects to create structures based on balance and fragility,” says director Johann Wolfschoon, in reference to the wooden sculpture (Toda historia no es otra cosa que una infinita catástrofe de la cual intentamos salir lo mejor posible, 2016) propped up against the left wall of the booth. Filled with books loosely based on disasters—including one by Gabriel García Márquez, perhaps the most important Colombian writer—the work addresses world issues through common materials. In the back of the booth, paintings by
Ana Elena Garuz
feature alongside Chilean artist
Ignacio Gatica
’s sculptures, which Wolfschoon describes as “an archaeological discovery of a future society.” (They depict obsolete objects including a dictionary, WiFi signs, and a letter that has disappeared from Spanish language keyboards.)

Mexico City-based collective Tercerunquinto covered the exterior wall of Proyectos Monclova’s booth in ripped layers of wallpaper for their latest site-specific installation. The collective’s three artists—Julio Castro Carreón, Gabriel Cázares Salas, and Rolando Flores Tovar—are best known for interventions in public spaces, often addressing political issues. (Hidden within the wallpaper abstraction at ZsONA MACO, the symbol of the Partido Revolucionario Institucional (PRI), the most dominant political party in Mexico, just barely emerges.) “There is this clash of the domestic, private space, which is reflected in the wallpaper, and on the other hand, this super political sign which is only slightly visible,” says gallery director, Polina Stroganova, of the work, an edition of three priced at $25,000. Inside the booth, Mexican artist
Raul Ortega Ayala
’s Babel Fat Tower sits among wooden sculptures by
Edgar Orlaineta
. Ayala’s replica of
Pieter Brueghel the Elder
’s 1563 painting, The Tower of Babel, is sculpted in animal fat and lit by three heat lamps—the fat destined to melt through the course of the fair in a commentary on global food politics, waste, dystopia, and ruin. 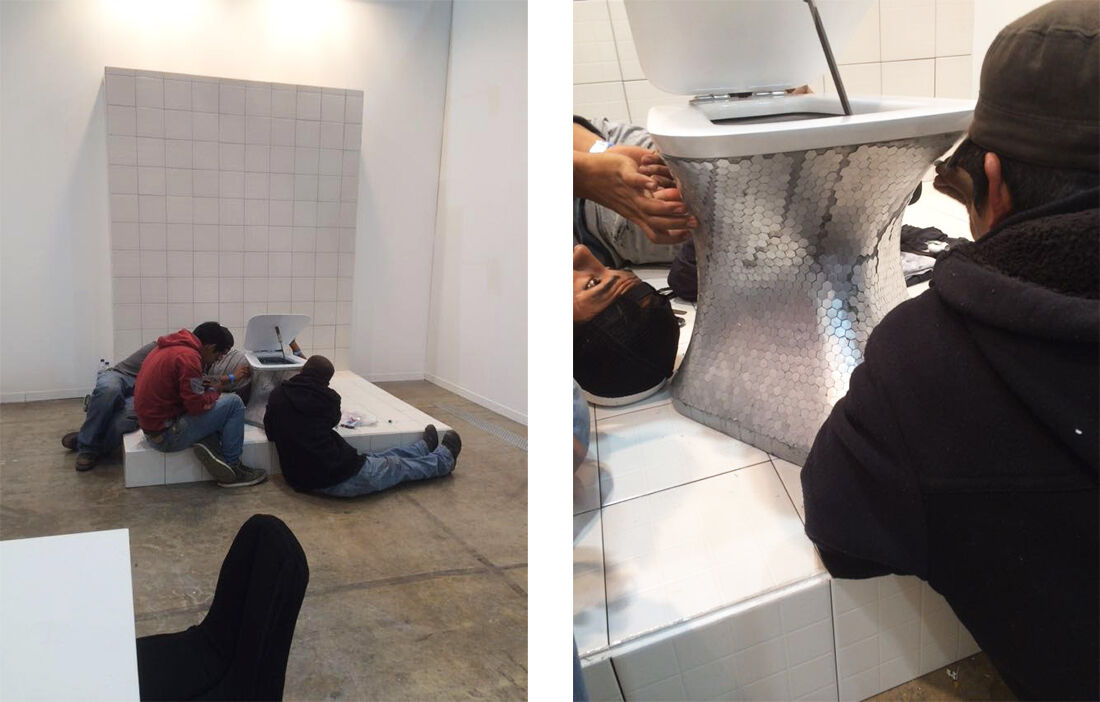 Throughout ZsONA MACO’s opening day, four Mexican workers placed finishing touches on a functioning luxury toilet in the shape of Carlos Slim’s Museo Soumaya—a performance as part of the first-ever collaboration between artists
Yoshua Okón
and
Santiago Sierra
. “Parque is a word for the storage of weapons, so all of our artists are socially engaged and criticize structures of power,” says gallery co-director Homero Fernandez. “This is a high-end toilet, the idea is for it to be usable,” he adds. “The artists decided to finish the work here so that they can show the part of the production [of luxury goods] that nobody sees.”

Mexico City’s Kurimanzutto was a clear highlight of the week even before the fair opened, thanks to their blockbuster group show on Tuesday night celebrating the founding seedlings of the gallery. (It’s the brainchild of Mónica Manzutto, José Kuri, and
Gabriel Orozco
—and historically, many of the artists got their start at Orozco’s famous “Friday Workshops.”) The gallery’s fair booth, too, stands a cut above the rest. Fittingly, among the strongest works are the new “Roto Shakus” by Orozco. The four vertical, colorful wooden sculptures are, according to the gallery’s Bree Zucker, based on “shakus,” the standard measurement in the artist’s current home base of Japan. “They are investigating his ‘Samurai Trees’ series but using Japanese culture,” says Zucker. “He is always expanding his idea of the circle, but I love when he does something where you can feel the Orozco presence but in a totally new form.” In addition to two sculptures by
Nairy Baghramian
, who currently has a show at Mexico City’s Museo Tamayo, Zucker points to works on paper by Mexico City-based
Daniel Guzmán
who she calls “the punk of the gallery” and who is one of the gallery’s founding artists. 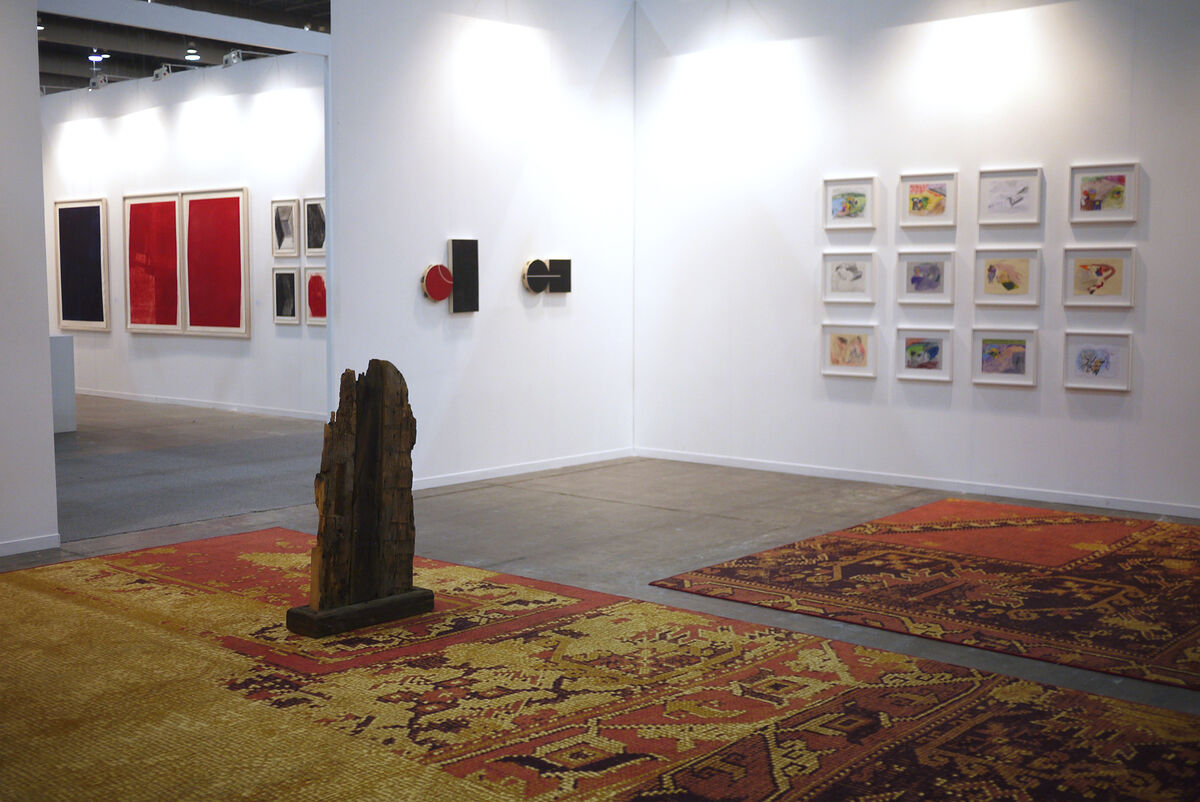 Those who love
Rudolf’s Stingel’s
ornamental rugs (installed memorably at the Palazzo Grassi during the 2013 Venice Biennale)—or the prayer rugs that the artist spread wall-to-wall at Karma Gallery last fall—shouldn’t pass up the gallery’s ZsONA MACO booth. Especially because, with a closer look, they’ll find the oil stick and ballpoint pen drawings of Walter Price, a Macon, Georgia-born, Brooklyn-based artist in his late twenties who is new to the gallery. “He went to the Navy when he finished high school as a way to get to art school,” says the gallery’s Sinisa Mackovic. Because of this, he adds, “the work is often loaded with personal anecdotes, whether from the Navy or odd jobs, like a tattoo artist apprentice or a Navy firefighter.” The drawings, somewhat sinister, depict vignettes ranging from a couple of orgies to the hats of Hasidic Jews, the latter recalling his time spent living in South Williamsburg.

Though it’s tucked away in ZsONA MACO’s furthest corner, Anonymous Gallery’s booth, with bright yellow walls and adorned with pineapple-sprouting basketballs, can be spotted from across the fair. According to gallery founder and co-director Joseph Ian Henrikson, the installation, by
Radames “Juni” Figueroa
, was first developed as a tree house to be used amongst friends in Puerto Rico. “I started asking artists for ‘banana works’,” he says of the pieces that fill the walls and shelves of the wooden structure, which is based on tropical architecture. And it’s not finished yet. In addition to performances that will take place throughout the week, “
Alex Becerra
is bringing some drawings in a pizza box later.”
—Molly Gottschalk
Explore ZsONA MACO 2016 on Artsy.
Related Stories