The 15 Best Booths at Frieze London

WITH WORKS BY MARY WEATHERFORD 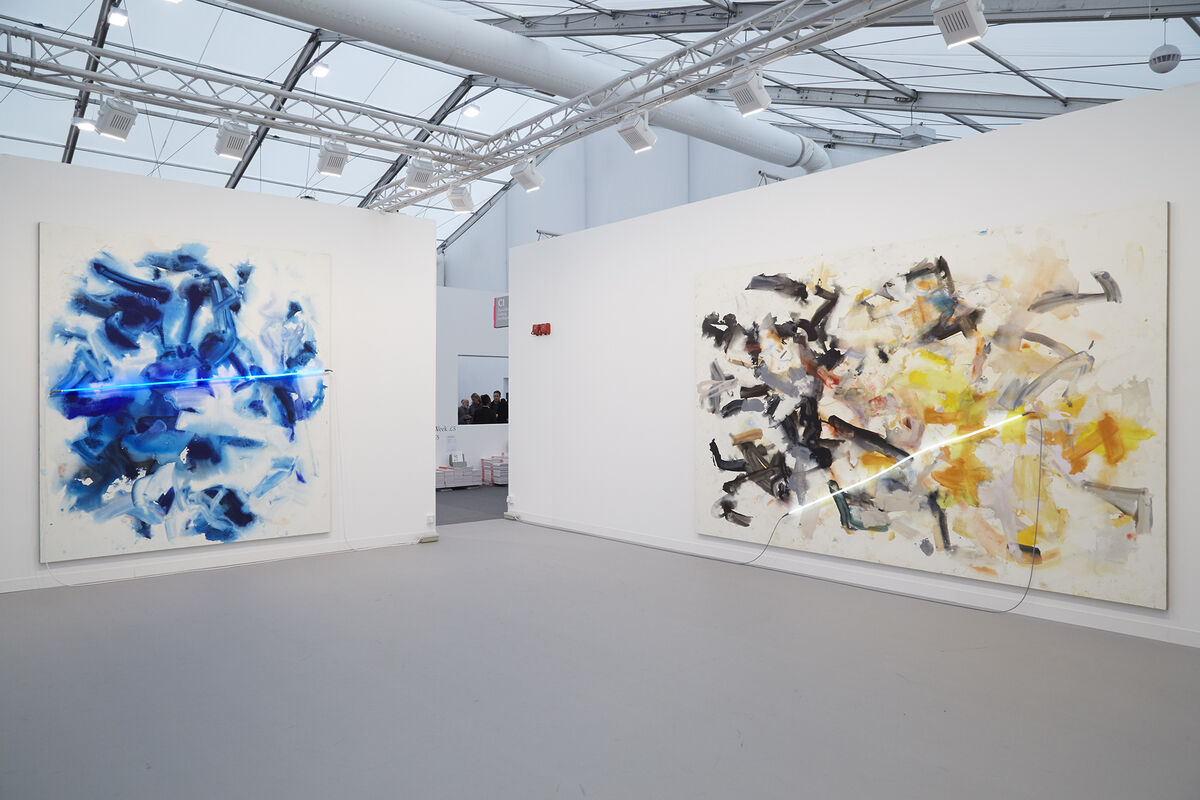 Fiftysomething artist Mary Weatherford, who follows in the lineage of American abstract painters from
Jackson Pollock
to
Helen Frankenthaler
, has been creating paintings with signature neon embellishments for the past three years. (All ten on view throughout Frieze, priced at $125,000 to $225,000, have been sold.) The new paintings, though abstract, were inspired by California landscapes from San Diego beaches to forest fires, and are made using Flashe paint on specially designed burlap-like fabric Weatherford has produced in Belgium. 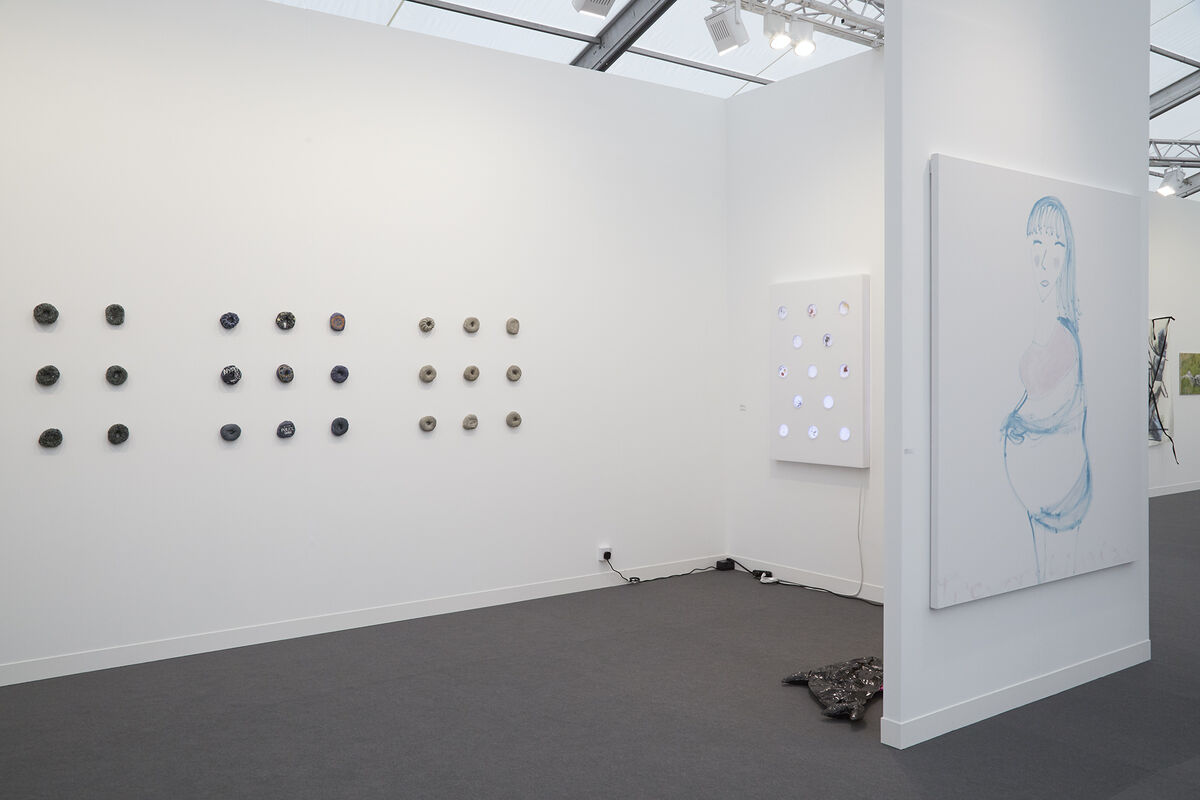 Advertisement
Josh Kline
, a standout at the New Museum Triennial this past February, and
Anicka Yi
, beloved since her solo show last April at The Kitchen, have each garnered their share of attention since the spring. Kline, currently featured in an exhibition at Modern Art Oxford (which ends this week), fills the main wall of 47 Canal’s booth with cast and 3D-printed donuts—one is handcuffed, another suited up like the NYPD. “They’re talking about the same politics that come out of his Zuccotti Park installations,” said the gallery’s Jamie Kenyon, motioning to donuts outfitted with concrete and shattered glass, and recalling the site of Occupy Wall Street in New York in 2011. On the neighboring wall, Yi’s simulations of bacteria—germs she cultivated after collecting samples from 100 women around New York City—hang side-by-side like paintings. “She’d love to be able to paint with bacteria—but it’s not so installation friendly,” adds Kenyon. The one on the left is titled after the bacteria that stems from swallowing a bad oyster, the one on the right is from avian flu—neither a pathogen one wants to bring home from Frieze.

With Works by Amie Siegel 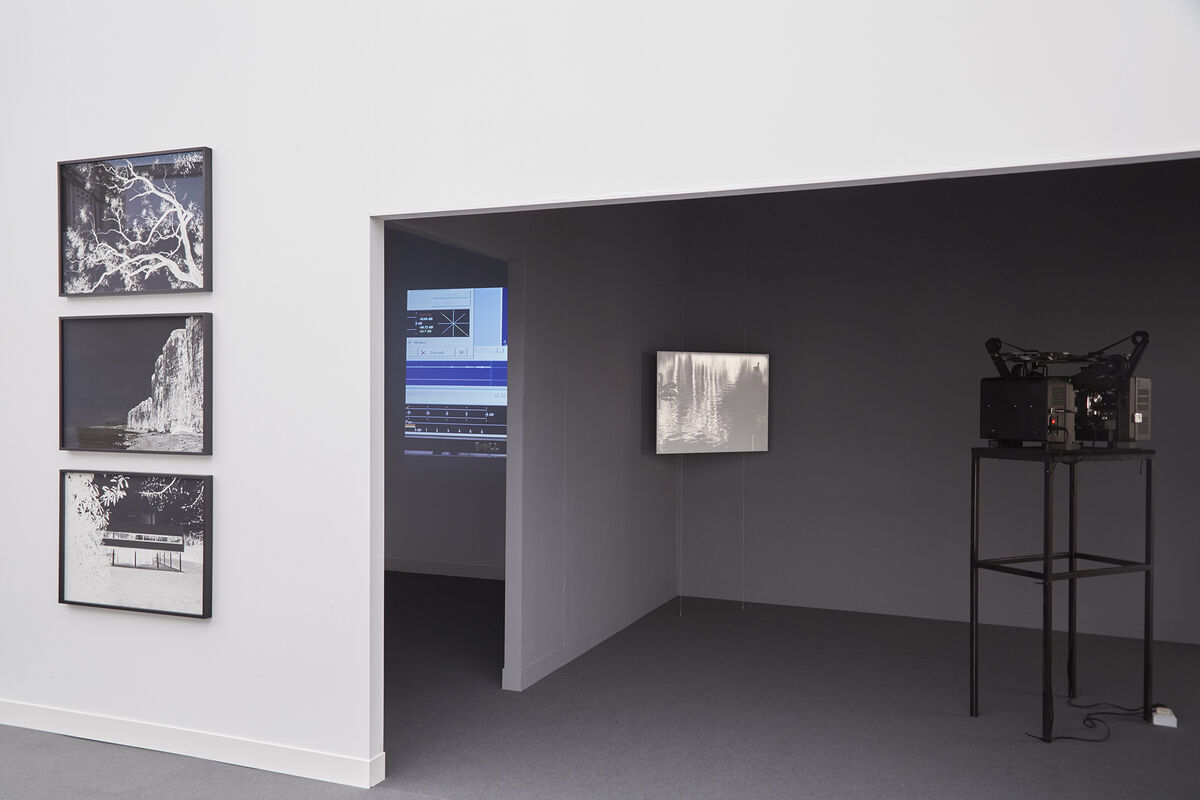 Amie Siegel is best known for Provenance (2013), a three-part installation shown at the Met in 2014, for which she traced the provenance of
Pierre Jeanneret
’s furniture designed for Chandigarh, India—modernist pieces that achieve prices as high as $300,000 for a single table—feeding her interest in cycles of value. Siegel’s work at Frieze first came about after she discovered Le Corbusier’s iconic, white Villa Savoye building in Poissy, France, and shortly after, an exact copy (except in black) in Canberra, Australia. A 16mm video installation, filmed in inverse black-and-white, combines imagery of both versions. 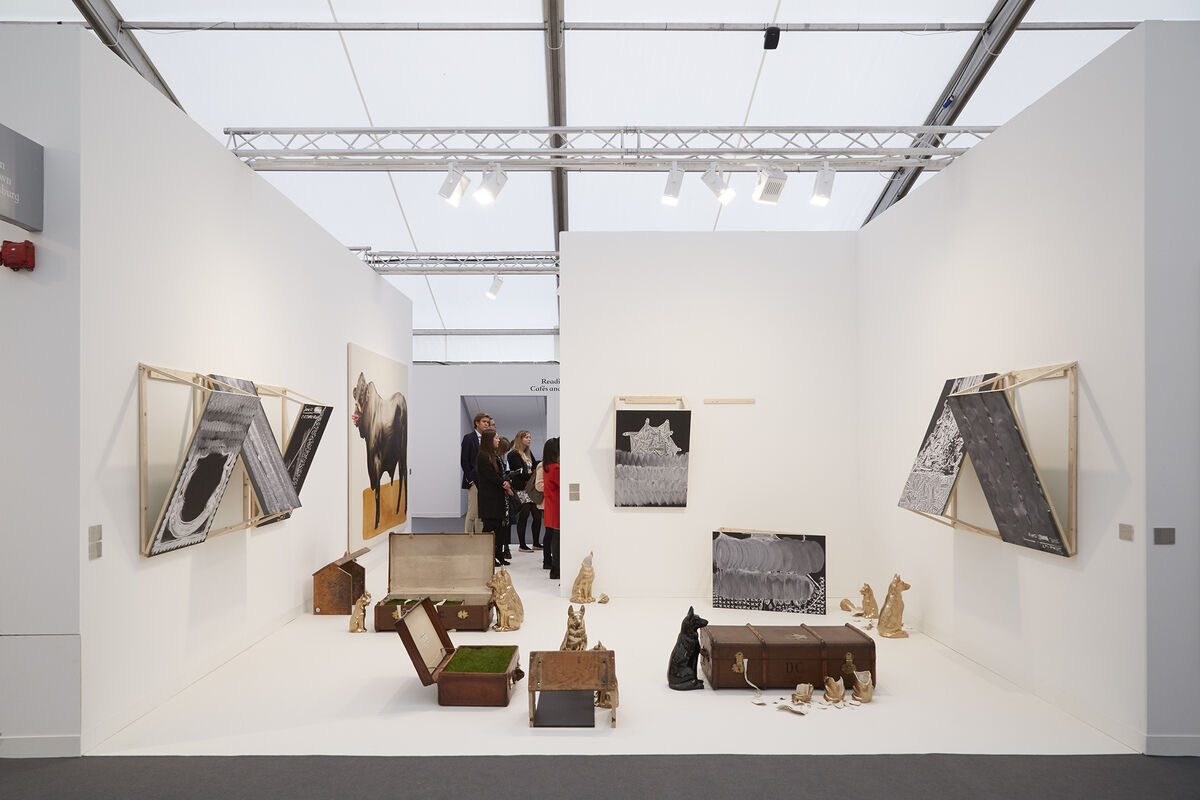 Cape Town-born artist
Kemang Wa Lehulere
’s installation at Stevenson Gallery—shattered sculptures of golden dogs, deconstructed school desks, and chalkboards—references the collective history of South Africa. “All of Kamang’s work is about examinations of history and retelling historic stories based on the idea that history is often a complete construction,” said director David Brodie, motioning to chalkboards, which remind us that, by nature, drawing can be erased. Nearby, school desks nod to the 1976 student riots in South Africa, and small gilded canines, some broken to pieces, recall police dogs used during riots and others that simply sit by and watch the events unfold.

With works by Ruairiadh O’Connell 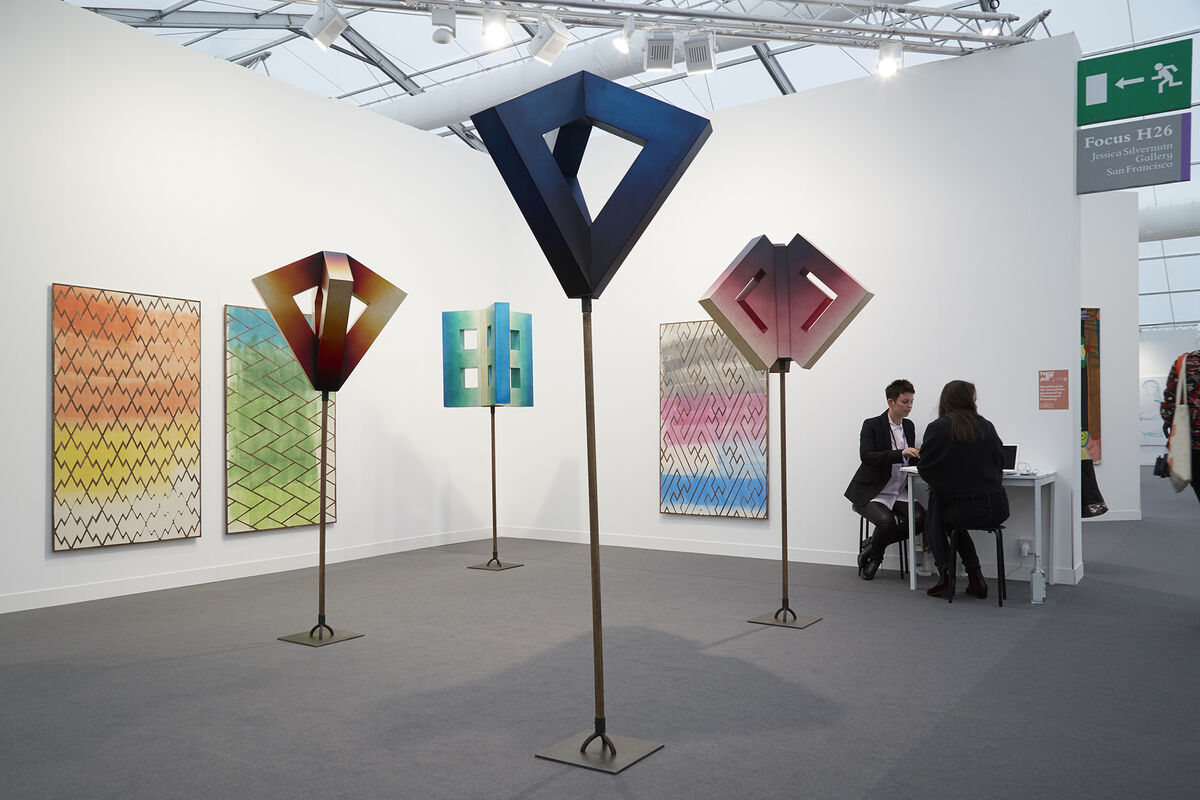 London-based, Scottish artist Ruairiadh O’Connell is no stranger to pattern—he’s pulled from casino carpets in Las Vegas and airplane seat covers from the 1950s. Now, the uniforms of 17th-century firemen, featuring zigzagging, lightning-like patterns earned Jessica Silverman gallery a Special Commendation at Frieze—awarded to only five booths. “The works are inspired by the uniforms worn by Hikeshi firemen in Edo period Japan,” says Jessica Silverman, motioning to the jesmonite and wooden panels lining the walls of her booth. The hand-stitched patterns were designed to protect firemen by trapping a layer of water within the fabric. In the center of the booth, wooden sculptures in the colors of Edo-period sunset woodcuts mimic flags waved by firemen to notify their communities of the impending danger. 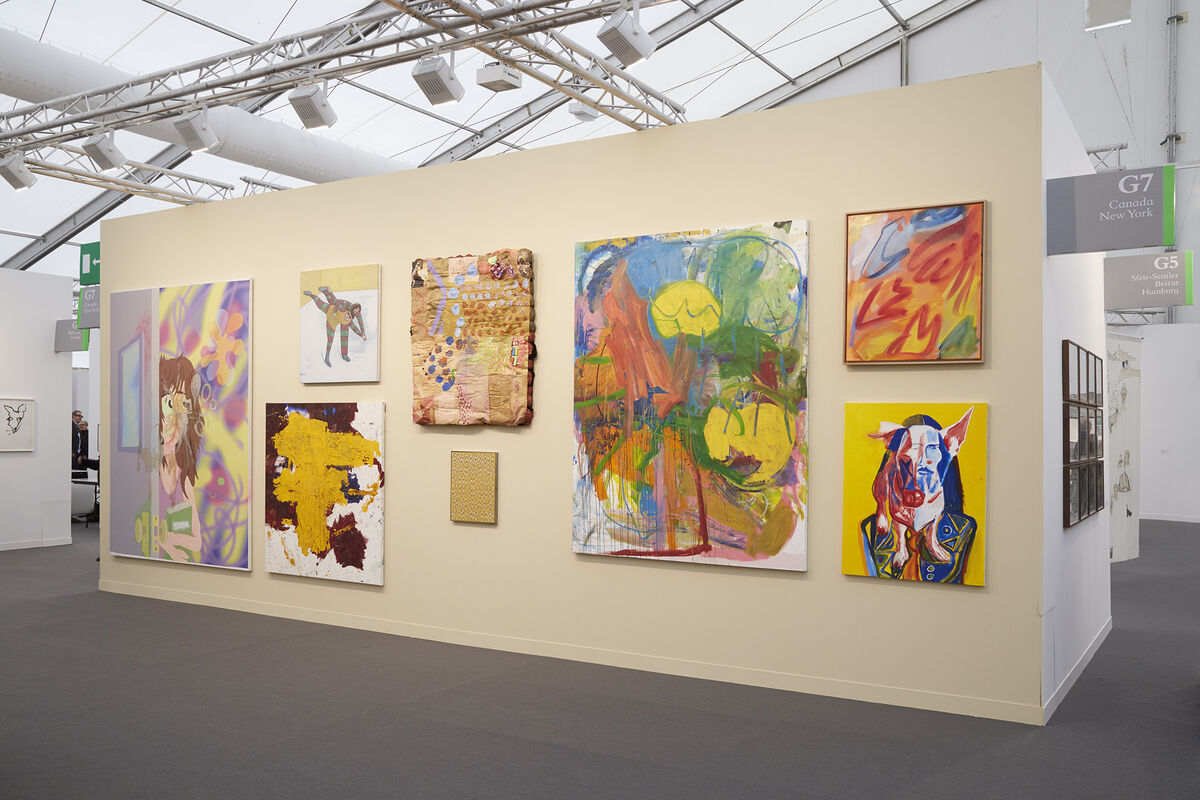 “We painted the walls beige to warm it up—to make it more cozy, like a house,” said director Phil Grauer of two giant walls covered salon style with brightly colored paintings. Though most of the works are by artists who have shown with the gallery for years—a Nike shoe and pair of socks by Katherine Bernhardt and a psychedelic oil-and-inkjet painting by
Michael Williams
among them—one small painting stands out from the rest. “The figure skater is actually by our art handler, Stuart Lorimer,” he said. “He’s not on our website, but we put him in because everyone loves him.”

“It’s moving—it’s like the board of a chess player,” said Isabella Herzig, director of Hauser & Wirth Zurich, of a booth filled with rows of plinths topped by sculptures from the likes of Martin Creed, Mary Heilmann, Paul McCarthy, Djordje Ozbolt, and a handful of equally notable others. “Every single position has its own field—you can walk through in your own path, and make your own relationship with all of the single pieces,” she said. “We tried to show the diversity in the artists that we work with and as many different types of structure in sculpture—if it’s ceramic, wood, glass, every piece is totally different.” A one-of-a-kind sculpture by Louise Bourgeois depicting an embracing couple trapped beneath a dome of glass was the standout work of the booth.

With works by Xu Qu 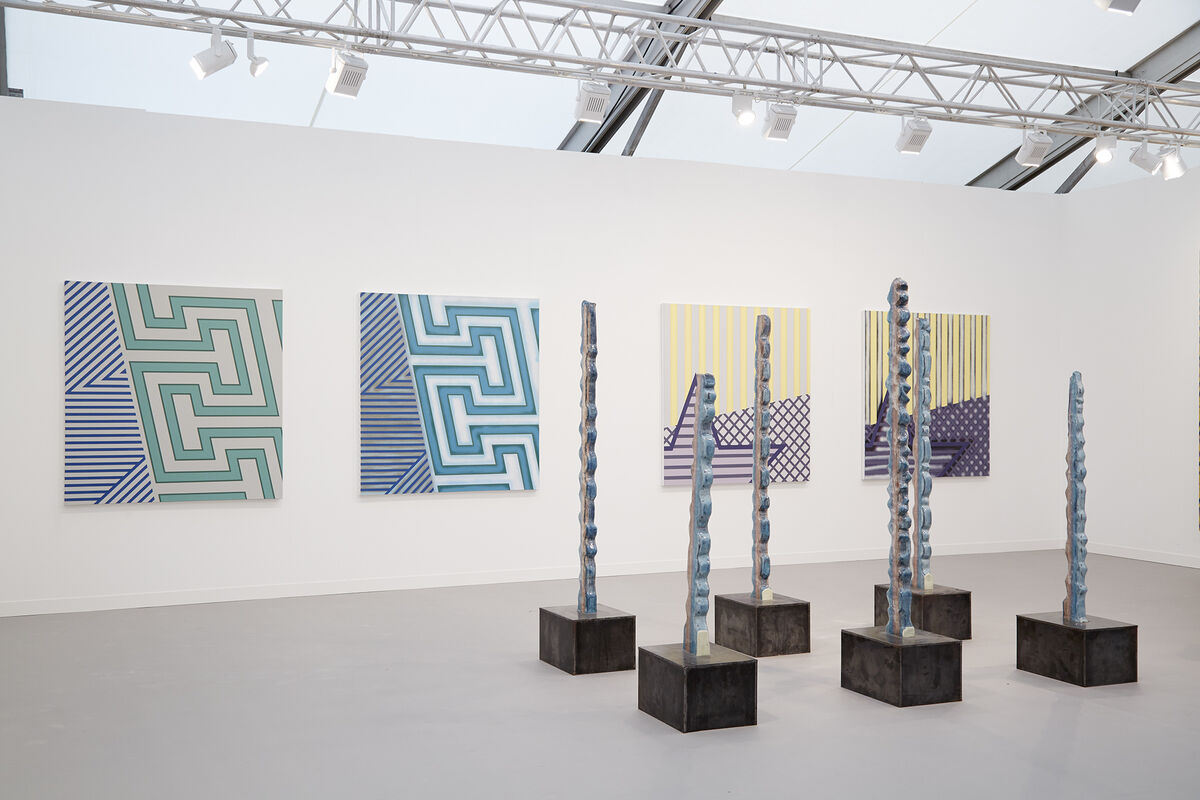 This solo booth shows Beijing-based artist Xu Qu’s series based on currencies from around the globe, complementing his newly opened exhibition, “Currency Wars,” at Almine Rech Brussels. “He will isolate a pattern or motif on a banknote and then magnify it to produce these canvases,” said director Lisa Boulet of the paintings, slipping in that Xu studied painting under
John M. Armleder
. In the center of the booth, seemingly ceramic sculptures are actually carved from stacks of Zimbabwean bank notes. “You can see the money here—it’s compressed—and then he shapes them into what he calls ‘totems,’” Boulet said of the chiseled bills. 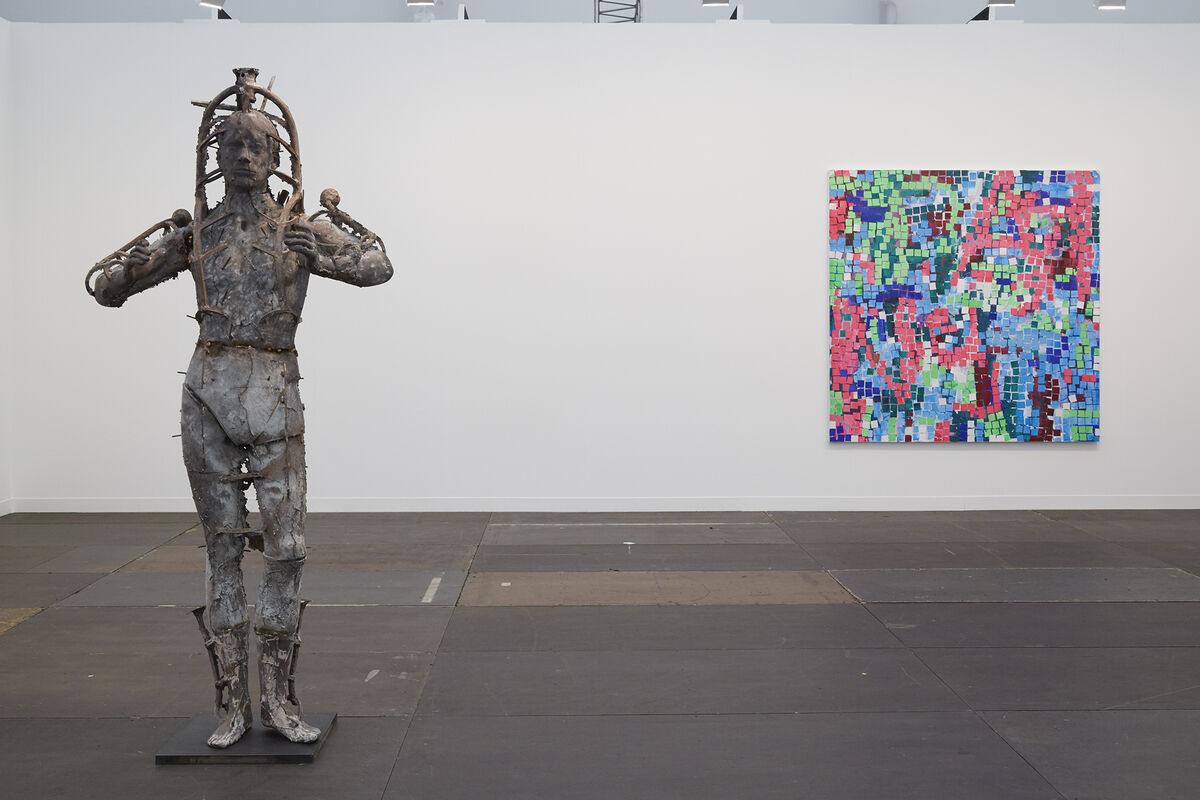 Walk past Simon Lee on day one, two, or three of Frieze London and you might not recognize the booth. “Every day we’re changing our hang. Tuesday it was Toby Zeigler, Wednesday it was Heimo Zobernig, and Thursday is
Josephine Pryde
, and Friday and Saturday is Valerie Snobeck,” said sales associate and artist liaison Clémentine Offenstadt. Austrian Zobernig showed just two works: a painting inspired by low-res pixels from the 1980s, and a 3D-printed sculpture—originally designed for the Austrian Pavilion of this year’s Venice Biennale.

With works by Chris Martin 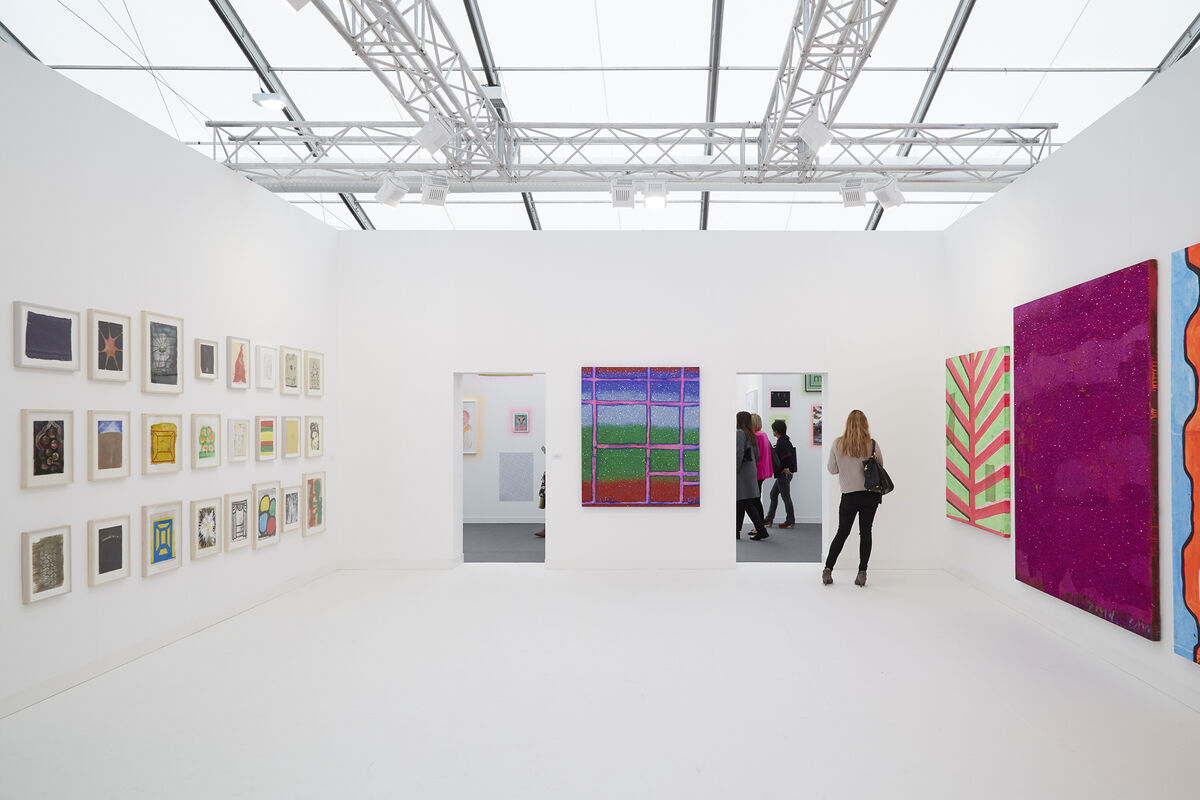 “He’s one of those that breaks rules sometimes,” Anton Kern said of 62-year-old American painter Chris Martin, whose recent works look across a wall of the artist’s drawings from the last 40 years. “Using glitter, how is that interesting? But he really makes it interesting,” he added, pointing out a layer of orange peeking out from beneath a solid coat of magenta glitter. “You see the freshness of the work.” 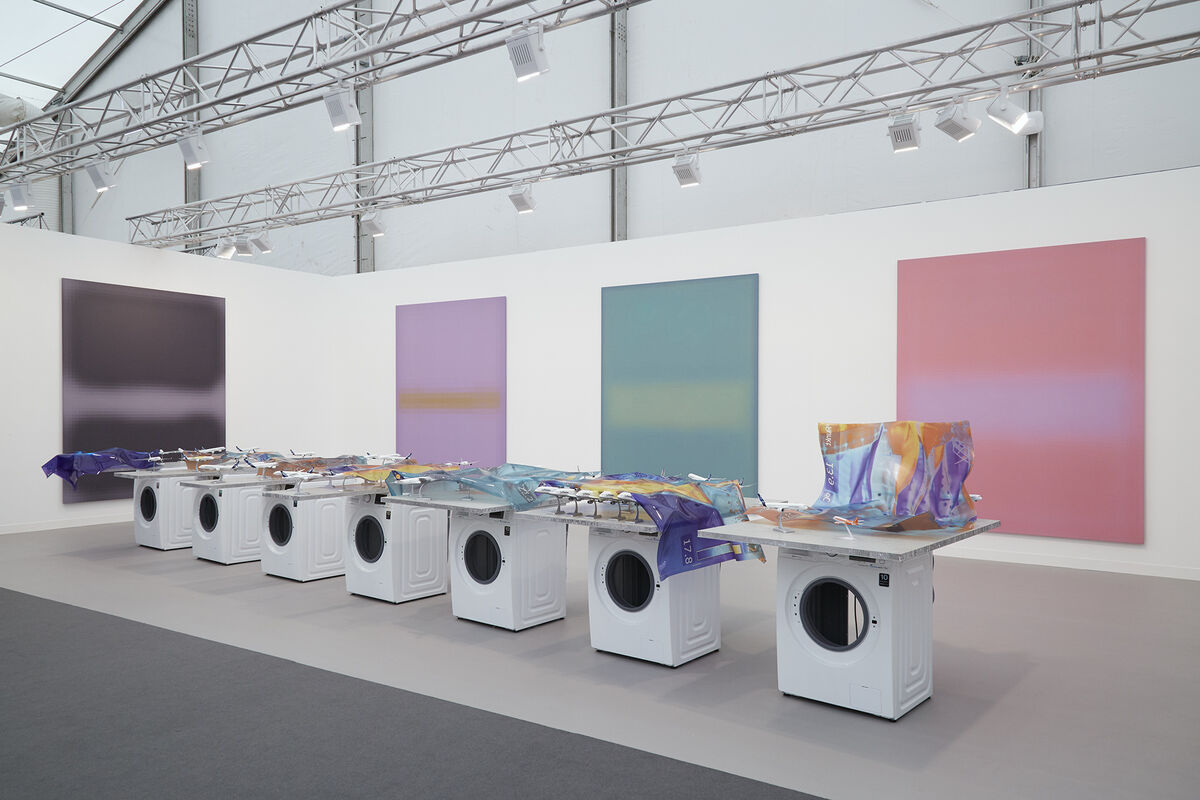 Winner of the 2015 Stand Prize and a favorite of both collector Anita Zabludowicz and curator David Gryn, Stuart Shave’s booth pairs work by Mark Flood—Rothko-esque paintings, extending his practice based on corporate logos—and Yngve Holen, whose sculptural installations look to the world of the commercial aviation industry by way of model aircrafts nestled atop infrared photographs that have been printed onto perspex, and placed atop washing machines-cum-pedestals. 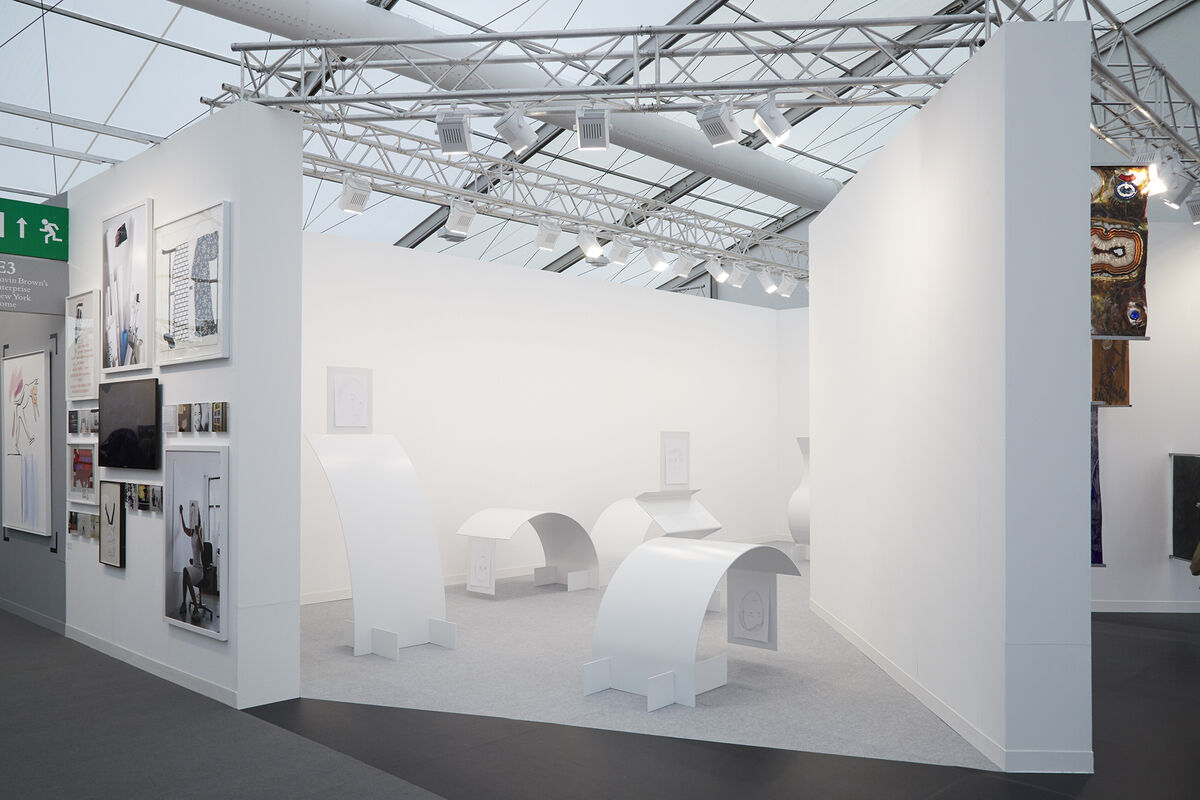 Alex Katz landscapes (a teaser for the artist’s solo show at the Serpentine next summer), glass paintings by Kerstin Bratsch, and a wall of works by
Frances Stark
surround sculptures and works on paper by Belgian artists
Jos de Gruyter and Harald Thys
in the main space of Gavin Brown’s booth. “They’ve worked together since the ’80s,” said the gallery's Thor Shannon about the Belgian duo, but this booth marks the first time the artists have worked with the gallery. Consider it a small taste of their show scheduled for November in Gavin Brown’s recently opened Rome space. Though the artists have presented versions of these works before—in their MoMA PS1 show this summer, for example—their previous sculptures have been rigid and upright. The white forms, bending and curving throughout the booth, are the first with a feeling of motion.

With works by Camille Henrot 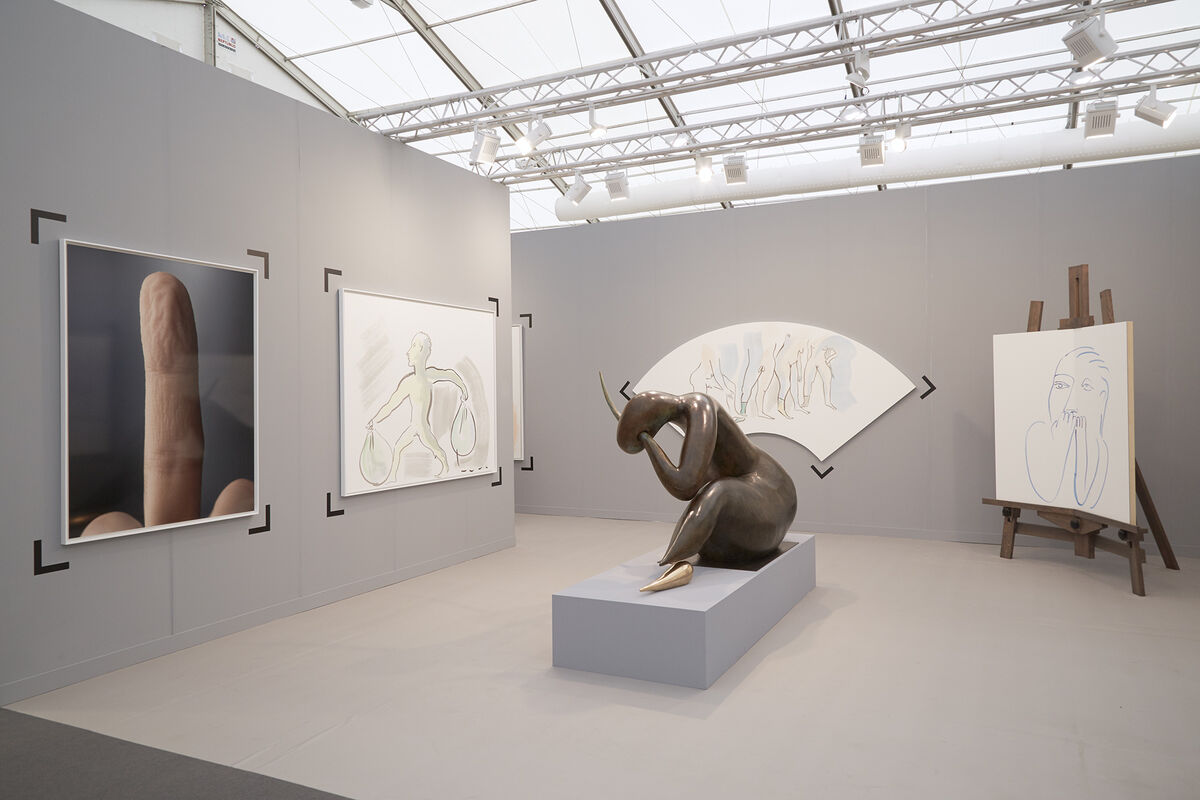 Camille Henrot’s “Minor Concerns” installation, which quickly sold out, has been the talk of Frieze London. The Paris-based artist made a name for herself when her film, Grosse Fatigue (2013) won the Silver Lion at the 2013 Venice Biennale. She has taken over kamel mennour’s booth with fine-line figurative watercolor drawings of nude men and women in expressive, sexual poses (think a naked woman and her interactions with a laptop). An easel holding a drawing showing a contemplative face overlooks the centerpiece: a woman’s figure, cast in bronze, head in her hands and holding the gaze of any who dare enter the lair of the charming and bold Henrot. 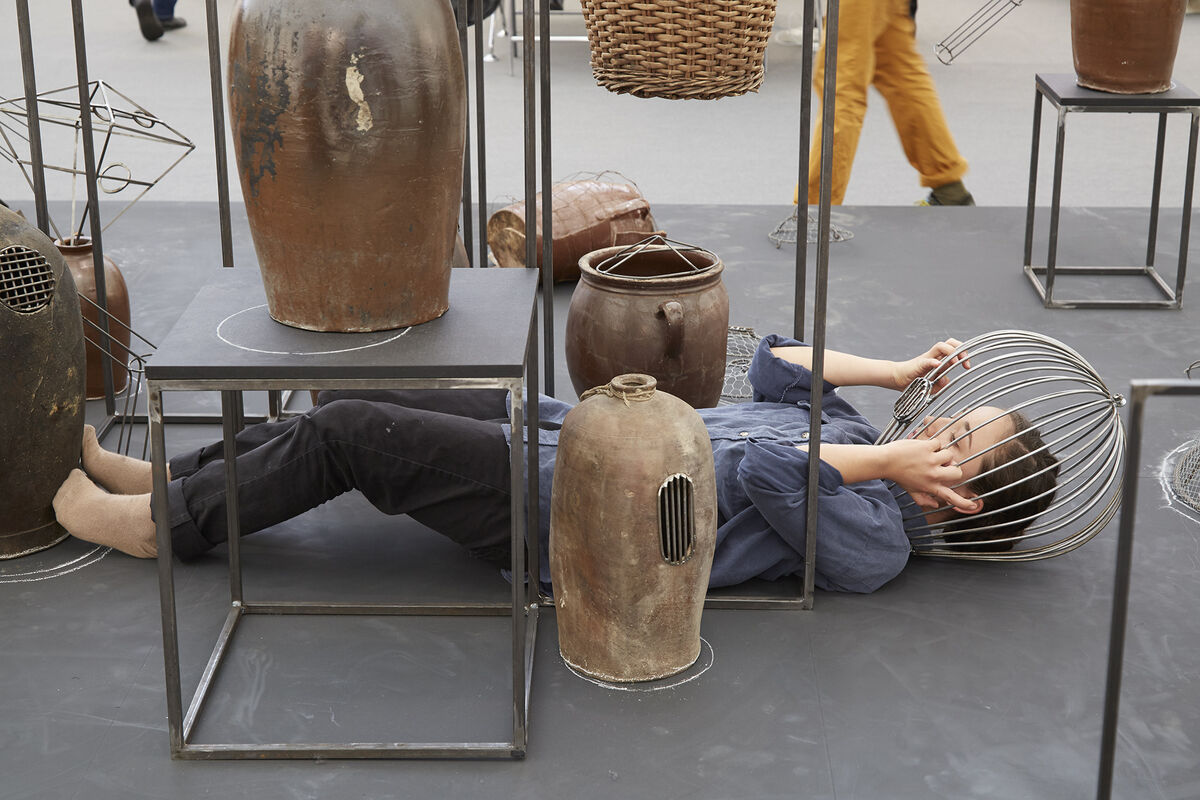 Eva Koťátková is the name to know in Frieze’s Live section. The Prague-based Czech artist drew attention during Frieze Projects in New York in 2014 with an installation akin to a children’s playground. This year, Koťátková’s installation—a collection of scattered but carefully positioned woven baskets, wire forms, and shattered jugs—centers on a performer lying on her back, her head trapped in a metal cage. 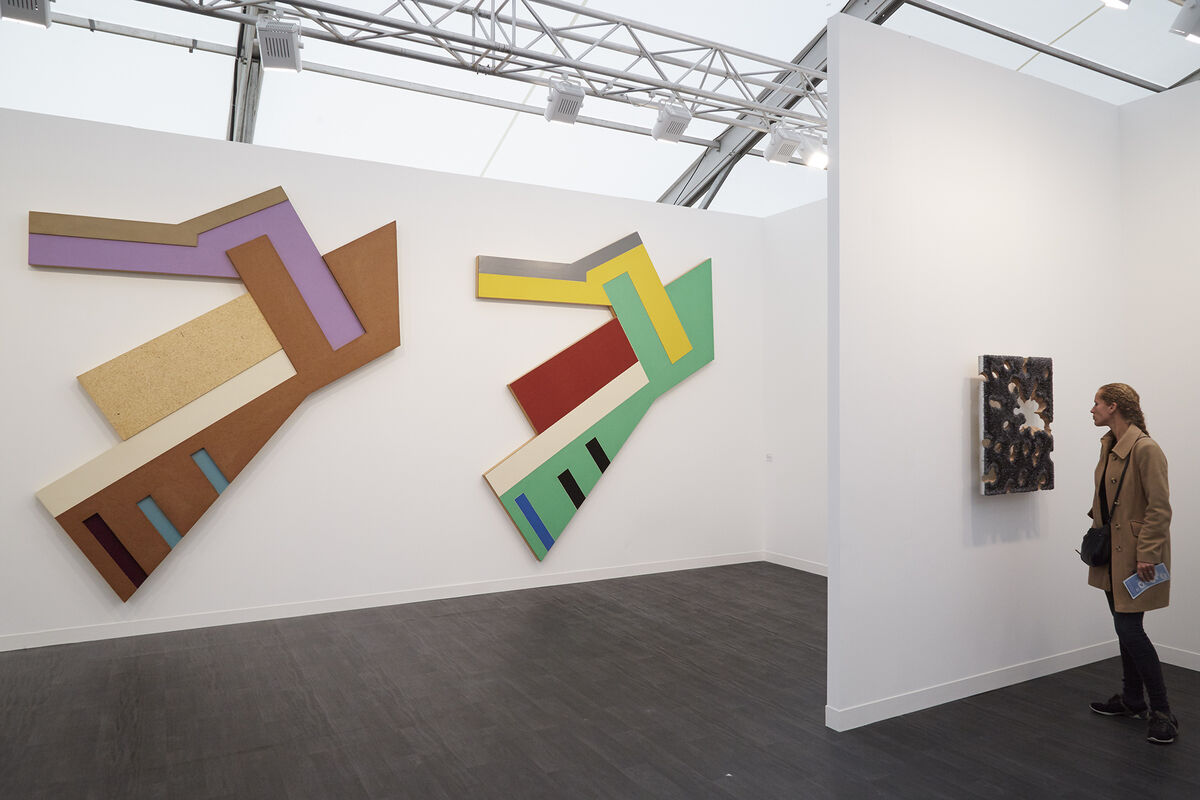 Following his 1970 MoMA retrospective (as the youngest artist to be granted one at the time), Frank Stella received an architectural book titled Wooden Synagogues while recuperating from a tennis injury. Soon after, the young artist began a series of geometric drawings and ultimately moved on to create giant cardboard and canvas 3D shapes covered with cut-out colored felt. At Frieze London, and just ahead of his Whitney retrospective, opening later this month, one wouldn’t dare walk by the three massive works (circa 1973) without stopping for a longer look.
Molly Gottschalk is Artsy’s Lead Visuals Editor.