In mid-January, the budding 25-year-old dealer had sent an ambitious—and impeccably polite—letter to “Herr Professor Albers” at his New Haven address, where the painter continued to live following his tenure as the head of Yale’s design department. “I intend to open a gallery… that will exclusively occupy itself with concrete painting and objects,” Mayer wrote to the artist he considered to be “one of the oldest and most prominent representatives of concrete painting.” He requested that Albers send along 30 or so works to include in his inaugural show, which he planned to open in a mere two months, offering up collector and critic Albert Schulze Vellinghausen and ZERO founder
Heinz Mack
as character references.
Albers promptly accepted the invitation and on April 10th of that year, Mayer opened “Josef Albers aus: hommage to the square und strukturale konstellationen” at the newly christened (op)art galerie esslingen, which was later to become the Düsseldorf institution Galerie Hans Mayer.

By 1965 Albers was long established in both the U.S. and Germany, having done teaching stints at the
Bauhaus
, where he began as a student in 1920 and remained until its closure under Nazi pressure in 1933—racking up the longest tenure of those who were involved—and at
Black Mountain College
, where he taught for 16 years before spending nearly a decade at Yale. His influence was made clear in the works of newly prominent American painters who had been his students, among them
Robert Rauschenberg
,
Richard Anuszkiewicz
, Eva Hesse, and
Kenneth Noland
.
The 76-year-old painter had also settled into his iconic “Homage to the Square” series, which he produced in prolific quantities from 1950 on—and which formed the core of Mayer’s exhibition, as well as his retrospective at the Met six years later, the first at the museum devoted to a living artist. 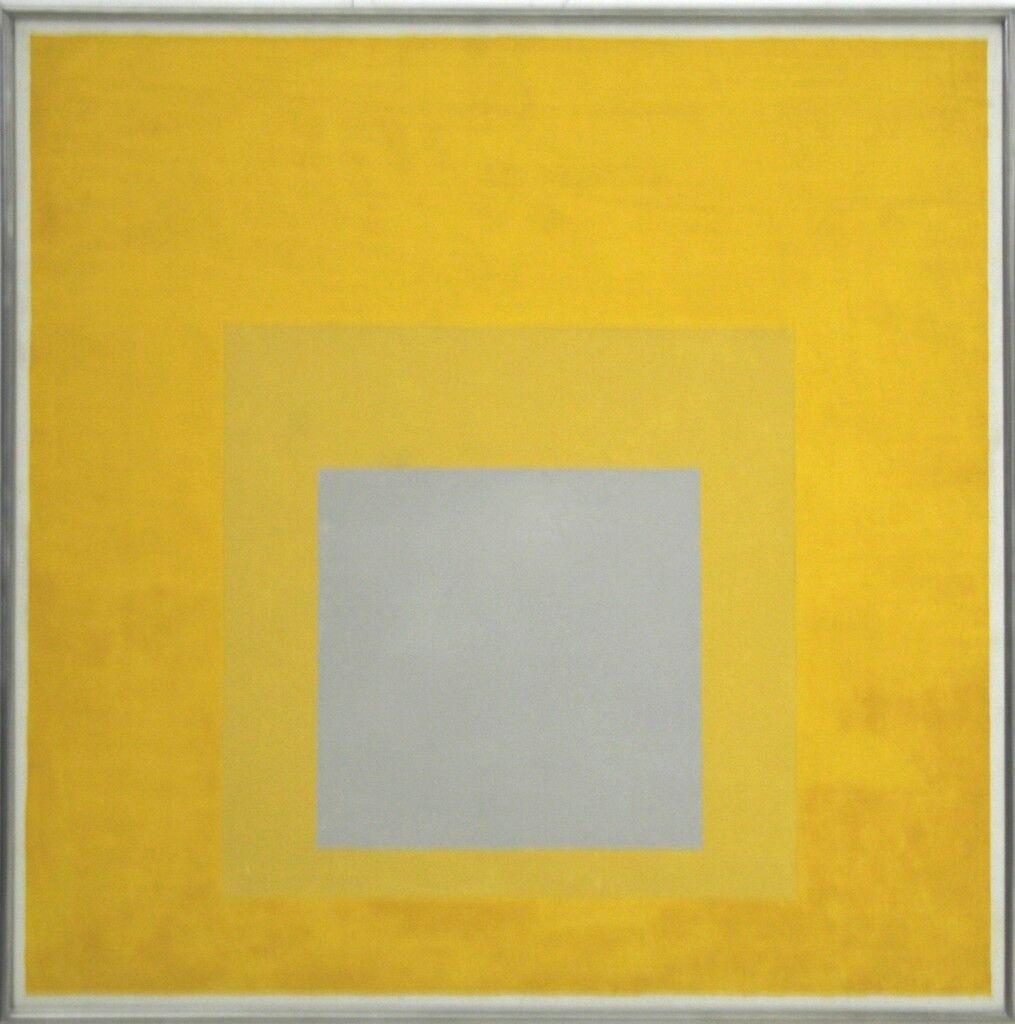 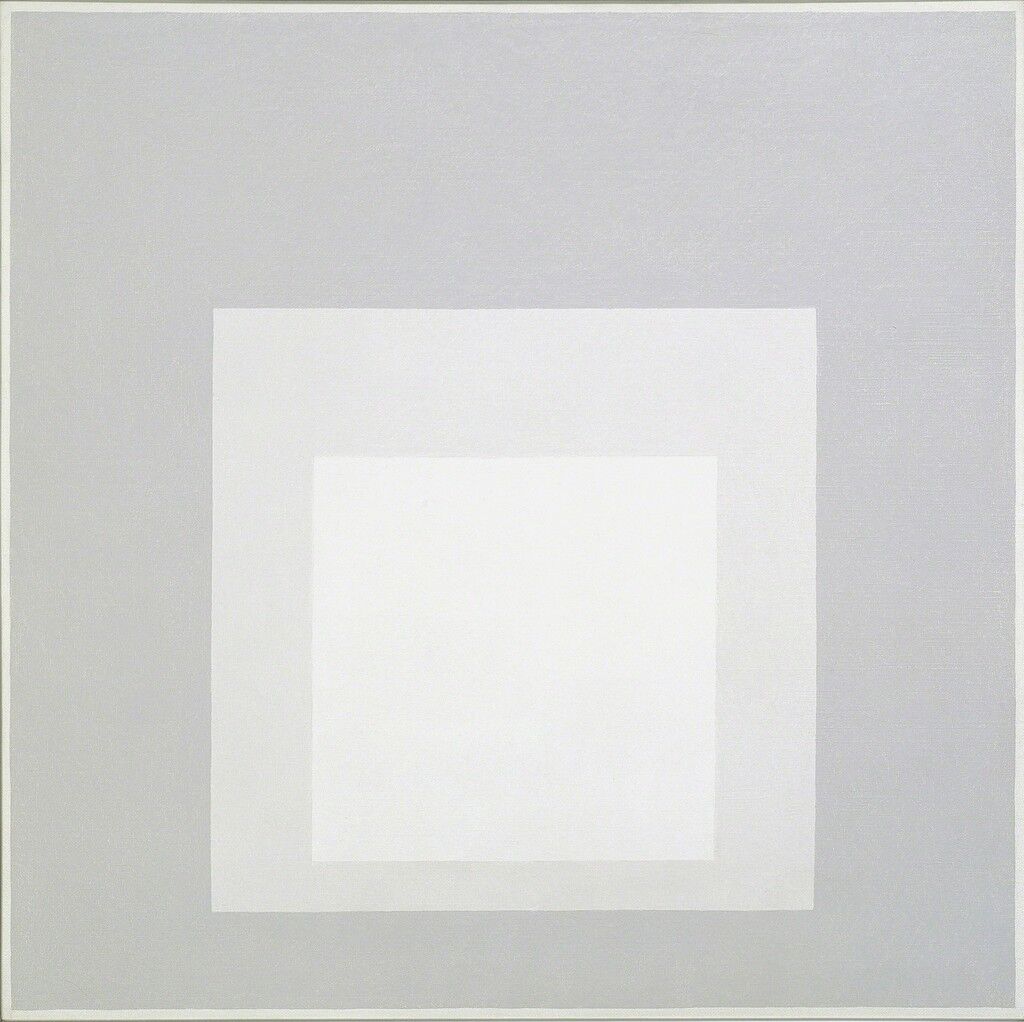 Hommage to the Square 'Opal', 1964
Galerie Hans Mayer
Advertisement
Albers’s work stands at the junction of several nuanced movements in the history of mid-20th-century abstraction, in a moment when its bulk stemmed from the domain cleared by
abstract expressionism
, however much later artists dared to diverge from its influence. The series in question, in particular, draws together in conversation the Suprematism of Malevich and the spatial experiments of Mondrian with movements that sprang up during the course of Albers’s work on the “Homages”—from the
op art
and
concrete art
that Mayer already espoused to
post-painterly abstraction
and
minimalism
.
By rendering the iconically
hard-edged
square soft around the edges, Albers injects a certain ennui into its structure. Notwithstanding his own rigorous parameters for creating these works, which rarely strayed from three or four compositions, his impulse to experiment and his inquisition into the endless possibilities afforded by the arrangement of layers of color yielded paintings that go beyond their origins. Devoid of the sharpness of the crisp edge, Albers’s squares become fields in which the color itself turns into the most important quality. Each shape is both bolstered and undermined by its relation to those that surround it, its soft edges creating a sensation of bleeding or contracting. Each “Homage” is an experiment unfolding, not constrained solely to its idea but becoming an autonomous object. 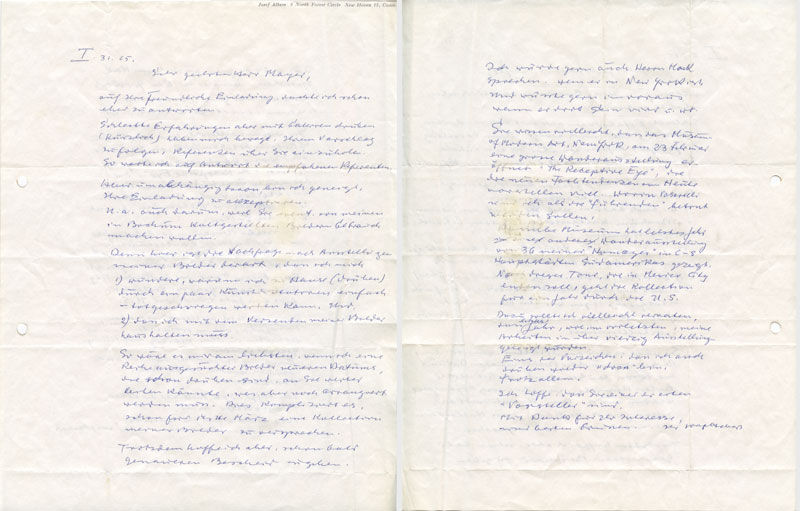 In this way Albers maintains a foothold in abstract expressionism while paving the way for his more strictly geometric successors, making his work a striking choice to herald in Mayer’s program. The “Homages” do not yearn for the viewer as do later optical works, which garner their energy through the act of perception; they retain an almost bewildering objectivity. It was this “discrepancy between physical fact and psychic effect” generated by the confluence of form and color that Albers considered “the origin of art.”
Mayer advanced the movement of geometric art over the course of his gallery’s evolution, whose first few years alone included exhibitions by
Max Bill
,
Ludwig Wilding
,
Walter Leblanc
,
Antonio Calderara
,
Nanda Vigo
,
Julio Le Parc
, and
Victor Vasarely
. His later repertoire expanded to include key American artists—he hosted a historic showing of
Andy Warhol
’s work in 1969—and Mayer grew to become one of the most respected importers of the American avant-garde. And it all began for the well-mannered young German with an impressive exhibition in a humble space, one evening in 1965.