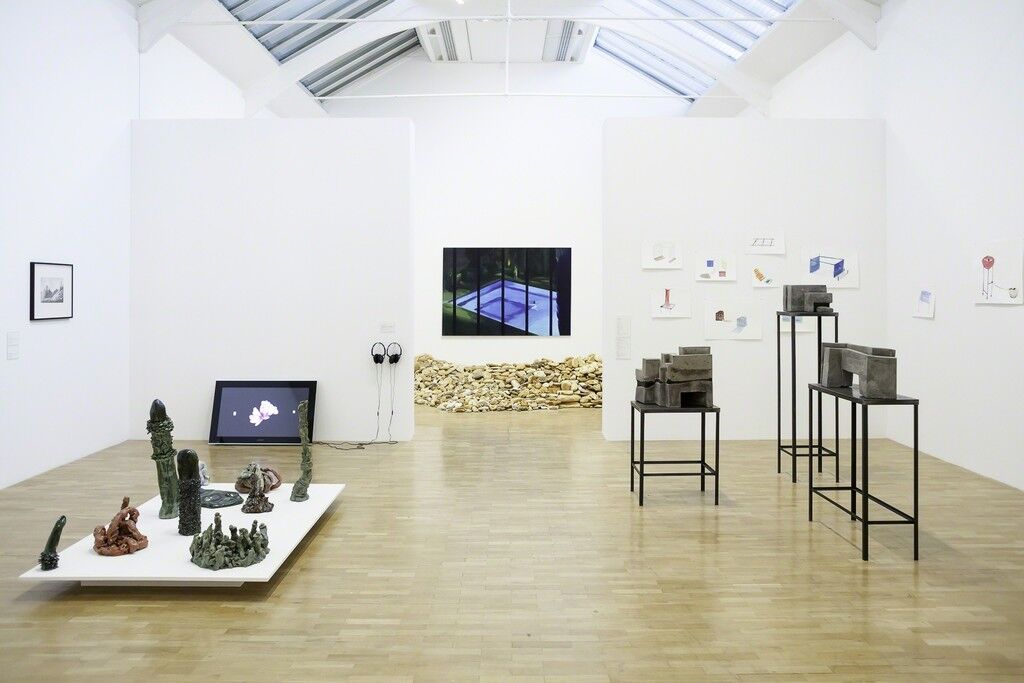 The first three works I encounter at the Whitechapel Gallery’s triennial exhibition of new art made by artists based in London are, in order: a colorful,
constructivist abstraction
painted directly onto the wall at the show’s threshold; a squiggle of bricks and mortar co-credited to the artist and her bricklayer father; and a short video that collages found footage of dancing dustbin men, beat-boxing builders, and singing bus drivers. Taken together, this triangle of works illustrates both the pleasures and the frustrations inherent to any visitor’s experience of an exhibition of this scale and diversity. 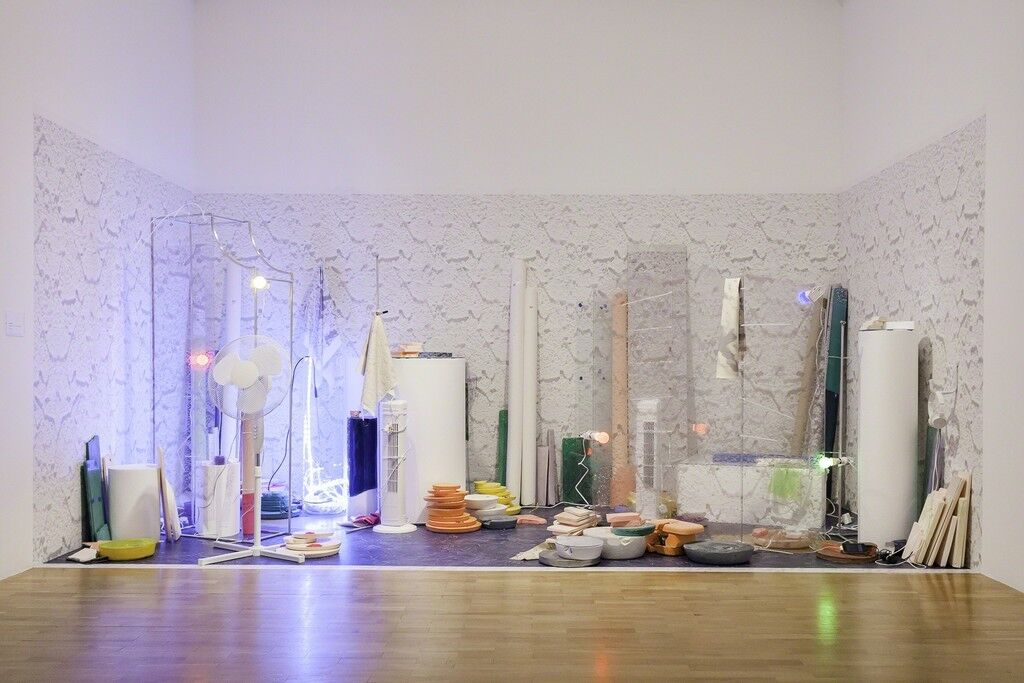 In retrospect, it’s easy to identify links between them—as explorations into the relationship between labor and creativity, for example—but to do so is to ignore, or worse, to suppress, the jarring dissimilarities in tone that distinguish the works. The austere precision of Lothar Götz’s wall painting Connection (2015), for example, could not be further removed from the uplifting spirit of enthusiastic YouTube amateurism that defines Sam Curtis’s Did anyone ever tell you you’re beautiful when you’re following orders (2012). Neither is it easy to reconcile its celebration of creativity’s irruption into the workplace—mundane processes enlivened by dance, song, or performance—with the industrial-construction aesthetic of Demelza Watts’s All in a Day, Brian (2015), which lists its materials as “8 hours of the artist’s father’s labour, cement, sand, bricks.” In this case (and although the wall text and list of works seem to disagree on whether Brian should be co-credited as an artist), labor is something that you pay for, like cement, and thus at the disposal of the artist. Intentionally or not, the piece suggests the segregation of work from creative expression, where Curtis’s film celebrates their reconciliation.
Whether you find these dissimilarities stimulating (each work casts its neighbor into a new relief) or irritating (the attendant difficulty to address each work on its own terms) will determine your enjoyment of the 2015 edition of the London Open. Its 48 participants were whittled down from over 2,000 respondents to the open call to artists aged 26 or over and resident in London, by a panel comprising critic Ben Luke, artist
Angela de la Cruz
, collector Nicoletta Fiorucci, gallerist Jake Miller, and Whitechapel Gallery curators Daniel Herrmann and Poppy Bowers. 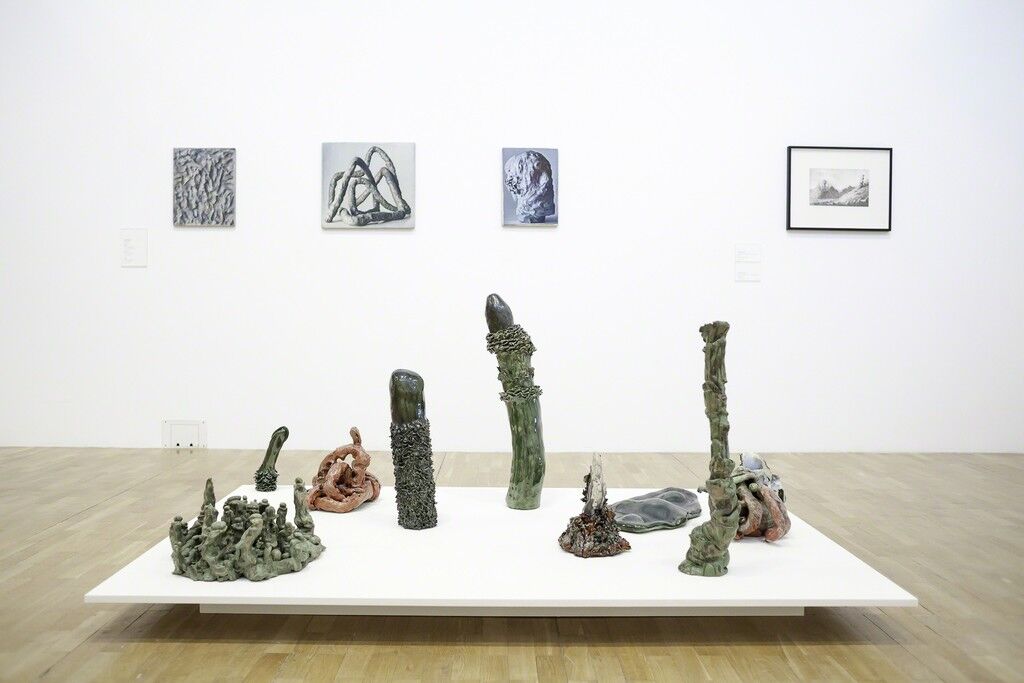 Advertisement
Considering the number of applications and the fact that submissions are theoretically open to artists of any stripe, it’s disappointing—though perhaps not surprising—to see that a particular style of art-making and presentation predominates. Familiar to anyone who has attended a graduate show at a London art school in the past eight years, it’s a mode premised upon the migration of digital images into the material world and characterized by certain tropes: incongruous, misshapen objects juxtaposed with treated or corrupted images; a flattening out of art history so that a single work compresses numerous visual languages.
The London Open aims to serve as a snapshot of the art being made in the city at any one time, identifying new themes and approaches, so the attempt to put together an at least loosely coherent presentation is understandable. Nevertheless, my own hope on visiting such exhibitions is to discover an artist whose work surprises, and while there is little here from outside the mainstream of the capital’s contemporary art discourse, there are works that succeed in transcending it. Holly Antrum’s Catalogue (2012-14) seems at first to be an archival portrait of an ageing artist, along the lines of
Tacita Dean
’s Michael Hamburger (2007) or
Camille Henrot
’s visit to
Yona Friedman
’s apartment (Film Spatial, 2007), but is enlivened by a playful, mischievous air of experiment. The filmmaker plays off the subject, and vice versa, and the result is something altogether more interesting than one might expect of a film that seems so on-trend in its exploration of archives and catalogues.

Upstairs,
Dominic Hawgood
’s LED light box Rise Up You are Free (2014) appropriates the clenched fist symbol designed by graphic artist Frank Cieciorka and adopted by the Black Power movement. This most unequivocal gesture is here rendered ambiguous, complicated by the white balaclava clutched in the fist, the seductive, branded glossiness of the image, and what might be a titular reference to Corinthians. Recalling artists as different as
Jeff Wall
and
Ed Atkins
, the work nonetheless discomfits and provokes.
This retro-aesthetic—symbols of historic struggles, the reclamation of ageing artists—is also apparent in Frances Scott’s The Aphotic Zone (2014), a five-channel video installation that apes
Chris Marker
and Tarkovsky but succeeds, just about, in making something fresh. If there is something to take from this overstocked but intermittently exciting exhibition, then, it is this determination on the part of the capital’s emerging artists to revisit, recycle, and reposition.
Ben Eastham
“The London Open 2015” is on view at Whitechapel Gallery, London, Jul. 15–Sep. 6, 2015.
Follow Whitechapel Gallery on Artsy.
Related Stories