The 50 Gallery Shows You Need to See This Spring

For “In the Gutter,”
Kantarovsky
’s second solo show with Tanya Leighton, the painter brings a new level of absurdity—and a darker palette—to the whimsical, mysterious cast of characters he’s become known for.

Steciw has shifted from providing incisive commentary on stock imagery to creating curious yet immaculate abstract works couched in carefully crafted frames; new works, some over four feet, will hang in clusters.

In his first solo show since the stunning three-hour theatrical work The Humans (2014),
Singh
offers “The School for Objects Criticized,” a witty light-and-sound installation in which a slinky, an abstract sculpture, and a bottle of bleach are among seven protagonists that critique the artist’s latest exhibition; the work takes cues from Molière’s The School for Wives Criticized (1663).

Altmejd
continues his “Bodybuilders” series with bronze sculptures that depict figures in the throes of ecstatic combustion; here, hands melt lovingly into faces and legs stretch high into space.

While the all-female group show model is on the ascent, this one delivers a smartly curated lineup of mid-career artists (many not from the gallery’s roster); a mix of mediums and styles ranges from the entrancing patterning of
Sascha Braunig
to the vivid figurative works of
Ella Kruglyanskaya
to intricate embroideries by Junko Oki.

“Made in Oven” at Rodolphe Janssen

In a true ode to spring, Janssen collides its artists’ spirited ceramic vessels—think: an Dan McCarthy facepot—with the theatrical creations of Belgian florist Thierry Boutemy, whose environments have bolstered the fashion world for years (on catwalks, in Vogue shoots), as well as Sofia Coppola’s 2006 film Marie Antoinette. 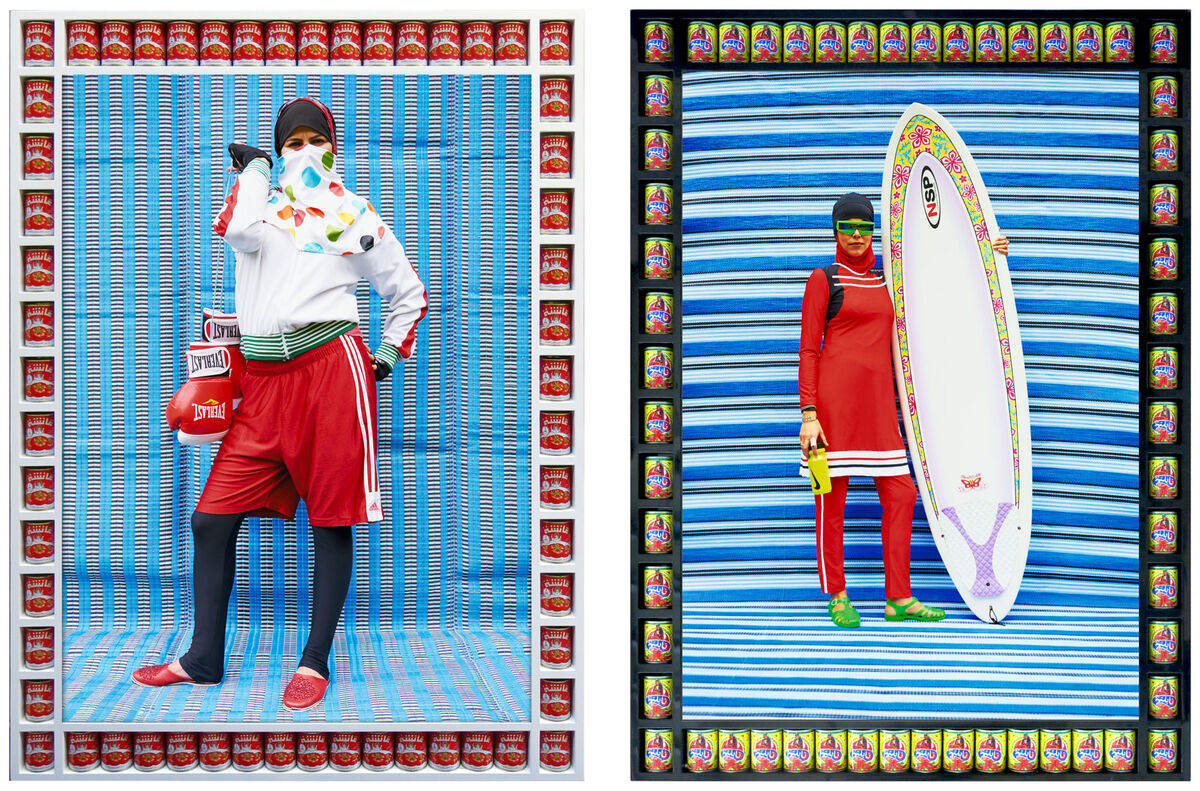 Hassan Hajjaj at The Third Line

In “La Salle de Gym des Femmes Arabes,”
Hajjaj
responds to the gender-segregated gyms of his native Morocco by transforming the gallery into a fitness club for women—and filling it with bold, bright photographic portraits of its customers (one sporting a hijab and boxing gloves, another with a head scarf and surfboard). 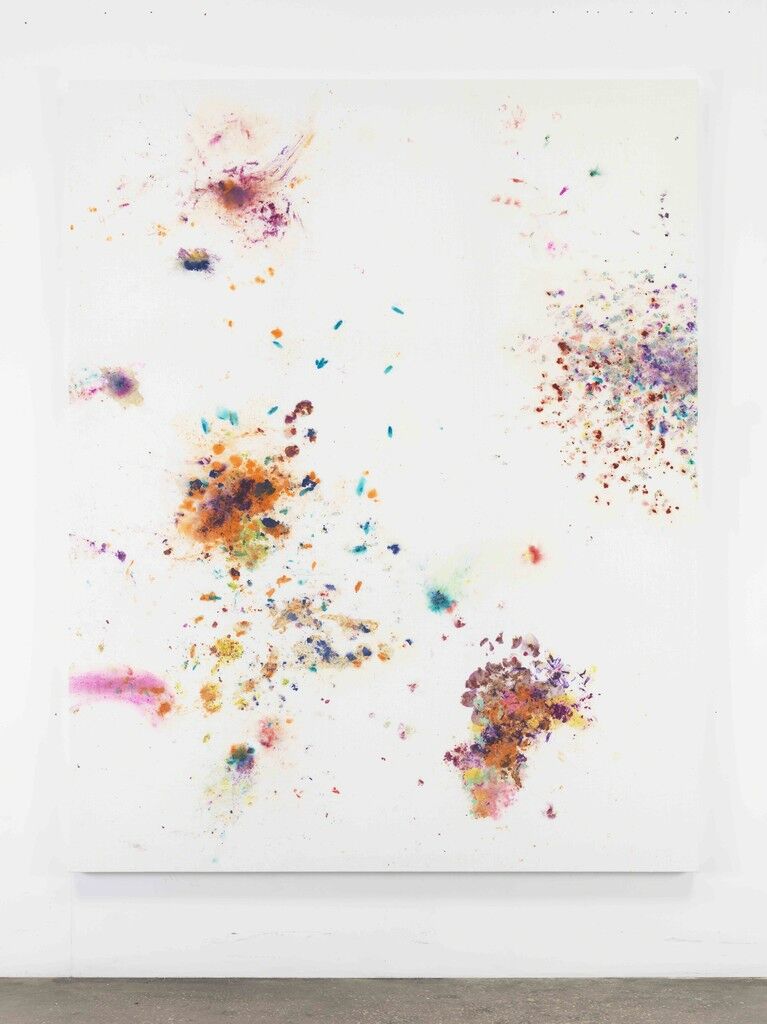 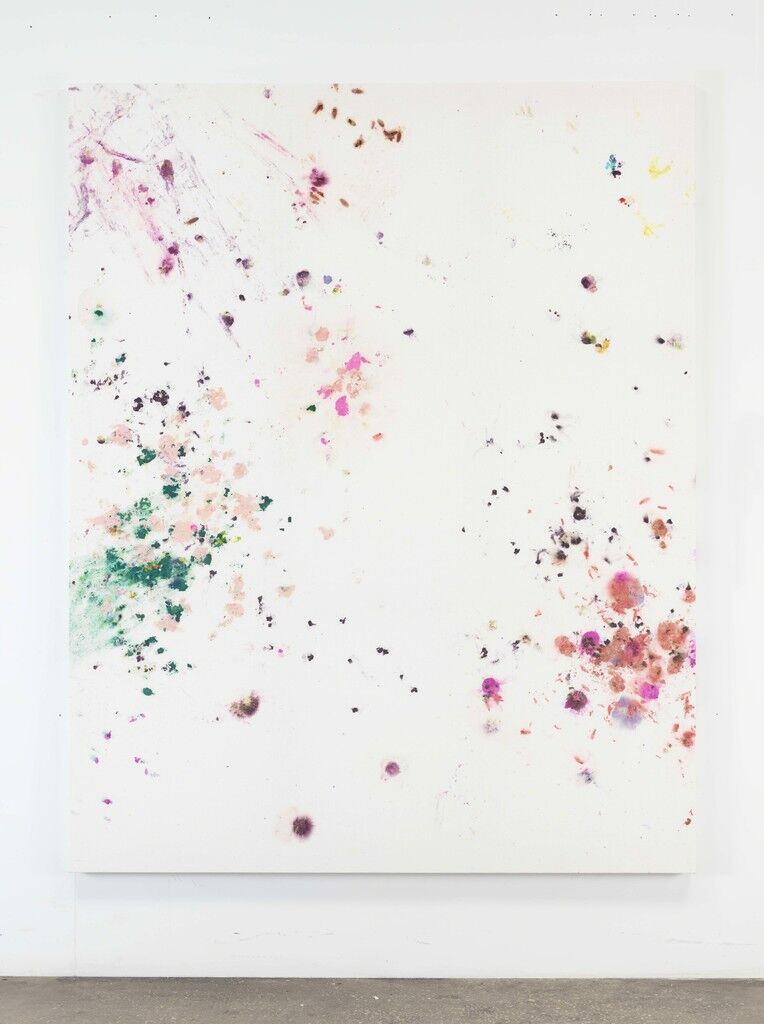 Dan Colen
Why don't we do it in the dumpster?, 2014
Gagosian Gallery 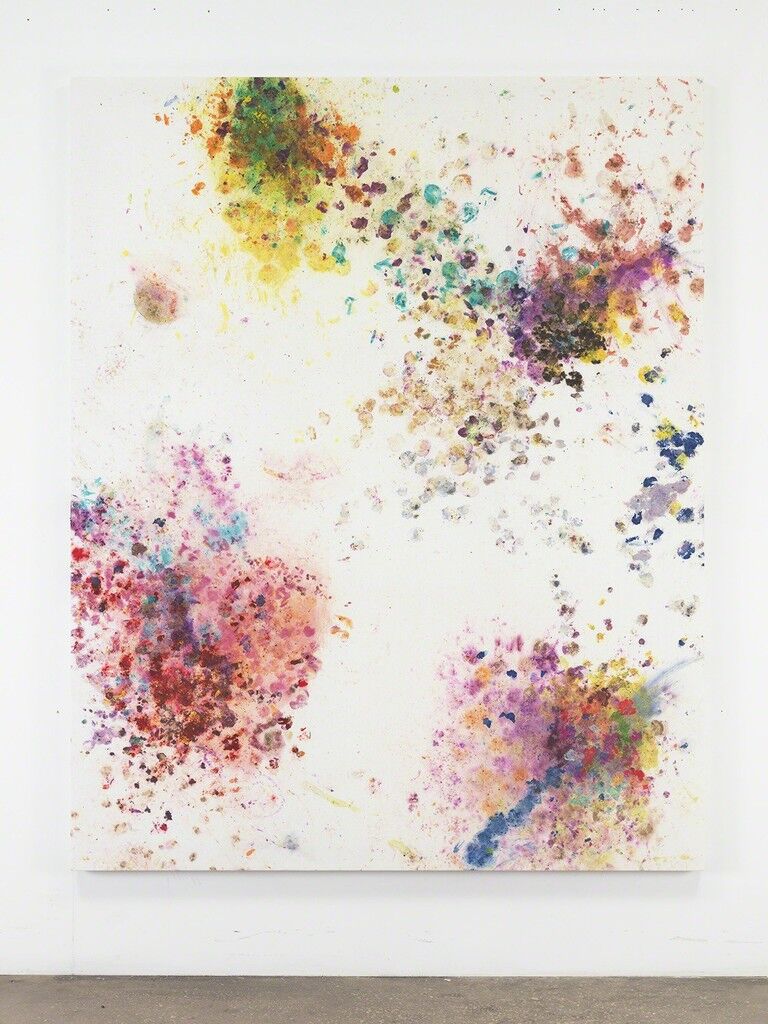 Titled “I Cried Because I Love You,”
Emin
’s debut in greater China promises to be a sprawling two-venue, confessional journey—inspired by a marriage ceremony in the South of France in which she wedded a rock—envisioned by the artist as a panoramic view of her varied practice, including paintings, embroidery, and her beloved neons.

Colen
’s recent work, which features in his first solo show in Hong Kong, has him employing New York bodega flowers and unexpected objects (bowling pins and billiard balls among them) to expel natural and artificial color onto canvas.

The Milan- and London-based gallery inaugurates its new Hong Kong space with a show of
Yan
’s signature portraits, which depict the adolescent faces of artists who have inspired the Chinese painter.

Coinciding with his first solo museum show, “Becoming Imperceptible” (which begins at Contemporary Arts Center New Orleans and travels to Museum of Contemporary Art Denver),
Pendleton
’s first solo show with the Spanish gallery is a site-specific presentation of new paintings and works on paper that relate to his 2015 critical anthology The Black Dada Reader.

Across a range of
Jaar
’s neon text-based works, the centerpiece is JOHANNESBURG 2026 (2016)—an expansive, 27-foot-long installation positing Johannesburg as a mighty port city of the future, with greatness to rival that of Carthage, Axum, and other urban centers from antiquity.

For his third show with the gallery,
Ligon
spotlights spoken words (“bruise” and “blues”) from a Steve Reich recording in neon; the light effects echoe the composer’s musical style.

In “Stumbling Pioneers,” the frontier (in particular,
de Balincourt
’s native California, where he returned after a 20-year hiatus to make these works) inspires paintings that conjure the West’s alluring mix of adventure and idealism.

For her first solo exhibition in the U.K., Johannesburg-based
Sunstrum
presents new wall-scale drawings and an animated video that fuse mythology, cosmology, and geometry (
Nancy Spero
is a touchstone); compositions intermingle goddesses, astronomical maps, and images of volcanoes caught mid-eruption.

The
famed cartoonist
’s anatomical drawings find a charged balance somewhere between refinement and obscenity; each mixture of ink and correction fluid feels as detailed as a
Dürer
engraving featuring contemporary characters (family members and Serena Williams among them).

Kelly
’s iconic feminist work Post-Partum Document (1973–79) is resurfaced in a show devoted to her early photographs, films, and prototypes from the 1970s, tracing the first six years of her son’s life and the intimate relationship between mother and child.

The term “dawn patrol” (used to reference both early-morning military missions and surfers seeking untouched waves) inspires a new series of paintings from
Smith
, who’s covered canvases in striations of blue and white paint that resolve as rolling waves.

For her first solo exhibition in L.A.,
Cameron-Weir
expands the scale of her dystopian sculptures, which fill the sprawling 14,500-square-foot space with a curved adobe wall affixed with neons, a hydrotherapy tub brimming with white sand, and other works that eerily blend the natural and the artificial.

“Revolution in the Making” at Hauser Wirth & Schimmel

The gallery inaugurates its highly anticipated L.A. space with a bang—a show featuring the powerful abstract sculptures of 34 pioneering female artists, created between 1947 and the present; with some 60 works on loan from museums, artists’ estates and private collections, it promises to be a veritable museum-quality show.

From Jack the Bellboy (1975), a wax painting
Schnabel
considers his first mature work, to a 2015 abstraction made from materials found in Mexico, this show of 12 paintings and approximately 40 drawings offers a concise survey of a leading painter.

Lukas Geronimas at the Landing

After his sculptures made eye-catching appearances in group shows at Andrea Rosen and 247365 last year,
Geronimas
mounts his most ambitious solo show to date, which debuts new works including the over-10-foot-tall Yin Yang Shelf and the graphite-swathed Custom Work Table, embedded with carvings that recall school-desk doodles.

In their first show with the gallery since 2009, artist duo
Jennifer Allora and Guillermo Calzadilla
present a show focused on three works that represent the breadth of their collaborative multimedia practice and explore existential themes—a sculptural installation made from acrylic lecterns, dinosaur bones, and the remains of extinct species; a performance in which three vocalists whistle at a four-billion-year-old rock; and a sound work based on recordings of breath.

In “Alhambra,”
El-Salahi
’s first show with Salon 94 since becoming represented by the gallery, the 85-year-old Sudanese legend presents paintings inspired by his recent travels to southern Spain, filled with joyful flamenco dancers, rich earth tones, and a nod to the country’s Islamic history.

Coinciding with MoMA’s Broodthaers retrospective, Kasmin offers an unprecedented show in the U.S. including 20 artist books created between 1957–1975, and 26 editioned works from 1964–1975—plus an iconic installation featuring a living African gray parrot and an audio loop of the artist reciting his poetry.

The centerpiece of
Parma-Smith
’s new show is Last Judgment (2016), a 25-foot-wide, multi-panel painting with whole sections peeling tidily to reveal a solitary female figure or lush sacred geometries beneath a seascape at sunset; also on view is a series of smaller ink-on-paper works.

With the show’s installation conceived by
Hammons
himself, this broad-ranging survey fills the galleries with traditional Japanese court music as it spans five decades of work from the tirelessly inventive artist, who has made everything from prints of his body on paper in margarine to drawings with Kool-Aid.

Hendricks
has directly addressed iniquities in the portrayal of black subjects with his portraiture, and new paintings in this show—like In the Crosshairs of the States (2016), in which a man in a grey hoodie is viewed unsubtly through the barrel of a gun—reveal a sharpening in the artist’s critiques.

Ahead of their first major museum solo show at MCA Chicago in June, the Ho Chi Minh City-based collective presents a new show including The Living Need Light, The Dead Need Music (2014), a video work that blends documentary and reenactment in a musical meditation on funeral rites.

Marionettes dance and play instruments around a sleeping sculpture of Cardiff inside an old trailer in one installation by
the duo
, while in a second, viewers’ shadows create soundscapes through activating dozens of salvaged speakers.

As her 101st birthday approaches,
Herrera
is first and foremost an active and influential artist, which will be more than evident through this new show of fresh abstract paintings in contrasting colors—which inaugurates the gallery’s newly built space in Chelsea.

Following her 2015 solo show at MIT’s List Visual Arts Center and inclusion in the New Museum Triennial, the 32-year-old artist presents new works motivated by art workshops she runs with children at a mental hospital in Prague, where she is based; the show comprises stone sculptures, collages, and giant wire sculptures inspired by the children’s drawings.

Sherman
has minted a veritable army of alter egos in her signature portrait photography over the past decades; ahead of her survey at The Broad this June, she offers a show of various signature types she has shot, including a return to the familiar terrain of early Hollywood.

Two weeks after the MacArthur Genius’s retrospective opens at the New Museum, the masterful
figurative painter
shows us new work in response to everyday life in New York City, ranging in scale from the monumental to the minute.

With a solo show at L.A.’s Hammer Museum under his belt, the
Seattle-born artist
shows large-scale objects that balance architecture, sculpture, and installation; surveillance and the utilitarian design demands of the American West are strong undercurrents throughout the work, on view for the artist’s first show with the gallery in Paris.

“One can’t have it both ways and both ways is the only way I want it,” says Czech of this show of large-scale photographs from two discrete series, “Critics Bouquets” and “Poems by Repetition.” 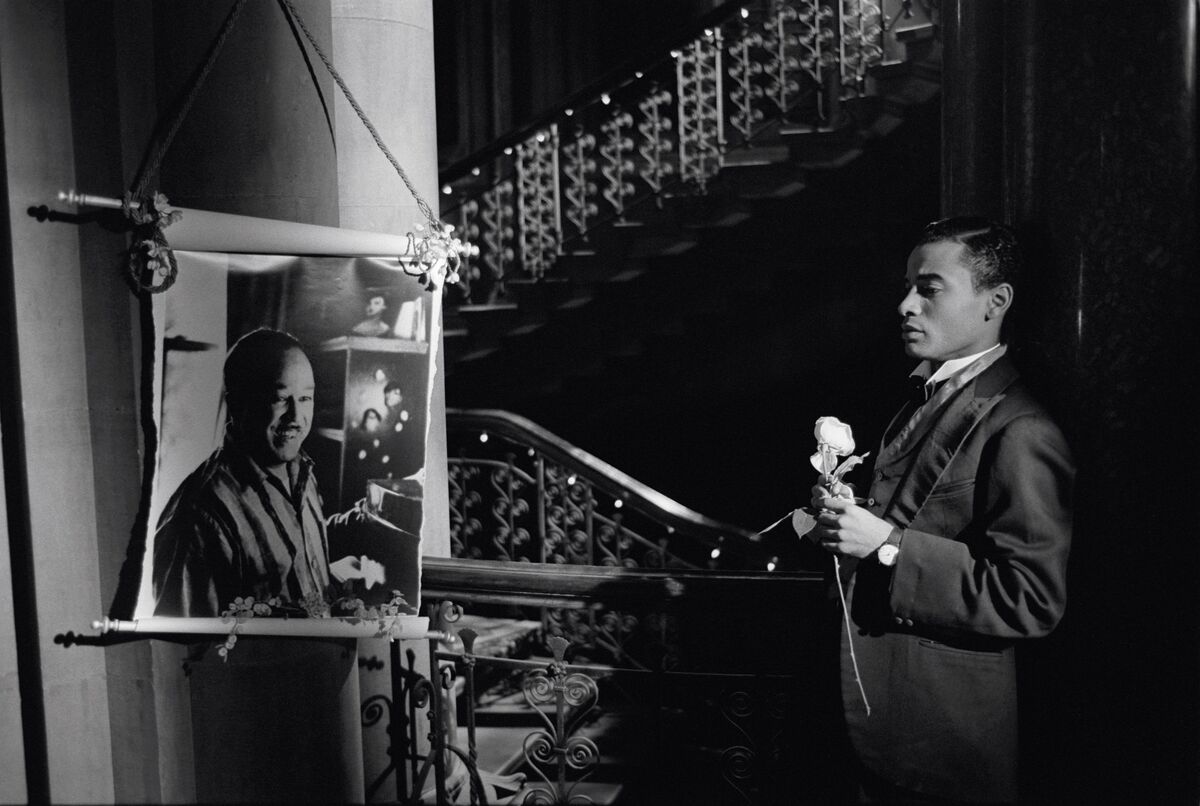 Titled “Vintage,” this exhibition offers a retrospective glimpse at the accomplished
British filmmaker
’s cinematic photography, including photographs taken during the filming of  his 1989 film Looking for Langston, a fantastical exploration of the artistic community, race, and sexuality in Harlem during the 1930s and ’40s.

Expect intricate new assemblages of wire and spun fibers from
Gomes
, whose attitude towards her materials suggests they’re nearly living.

Mariko Mori at SCAI The Bathhouse

The
Tokyo-born powerhouse
mounts a show of new sculptures inspired by scientific theories purporting that our universe has no beginning or end and the eternal cycloid form—manifested in otherworldly, dynamic swoops of aluminum covered in a pearlescent sheen—as well as photo-paintings based on drawings of the ocean from Okinawa.
Artsy Editors
Explore exhibitions around the world on Artsy.
Related Stories

Why Ibrahim El-Salahi Belongs beside Picasso in Art History 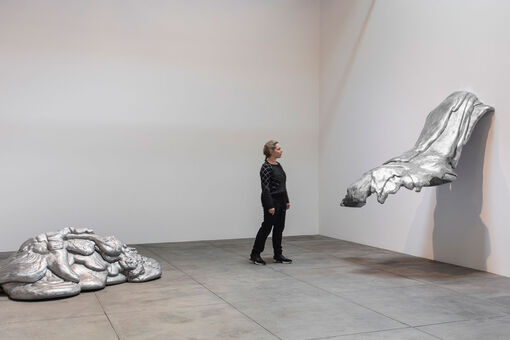 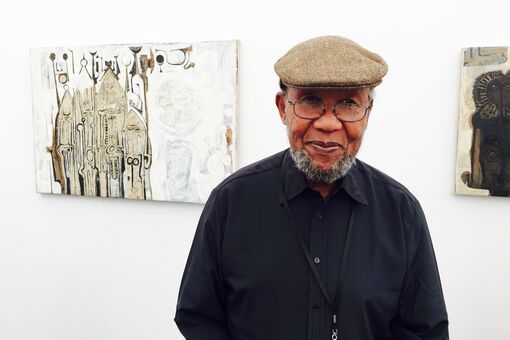