Artsy Editors
Sep 16, 2016 9:04am
The ninth edition of Art Berlin Contemporary (abc) is in full swing at Station Berlin, bringing collectors to a city that buzzes with artists year-round. The fair, known for its high-quality solo presentations of brand new work, is notably smaller than in its previous iterations, with only 65 exhibitors—compared to some 100 last year—from a total of 12 countries. Director Maike Cruse described the fair’s decision to “reduce participants to raise the quality,” concluding that: “I’m happy with the development.” We sought out the eight best booths amidst the smaller but decisive group.

WITH WORKS BY FABIAN KNECHT 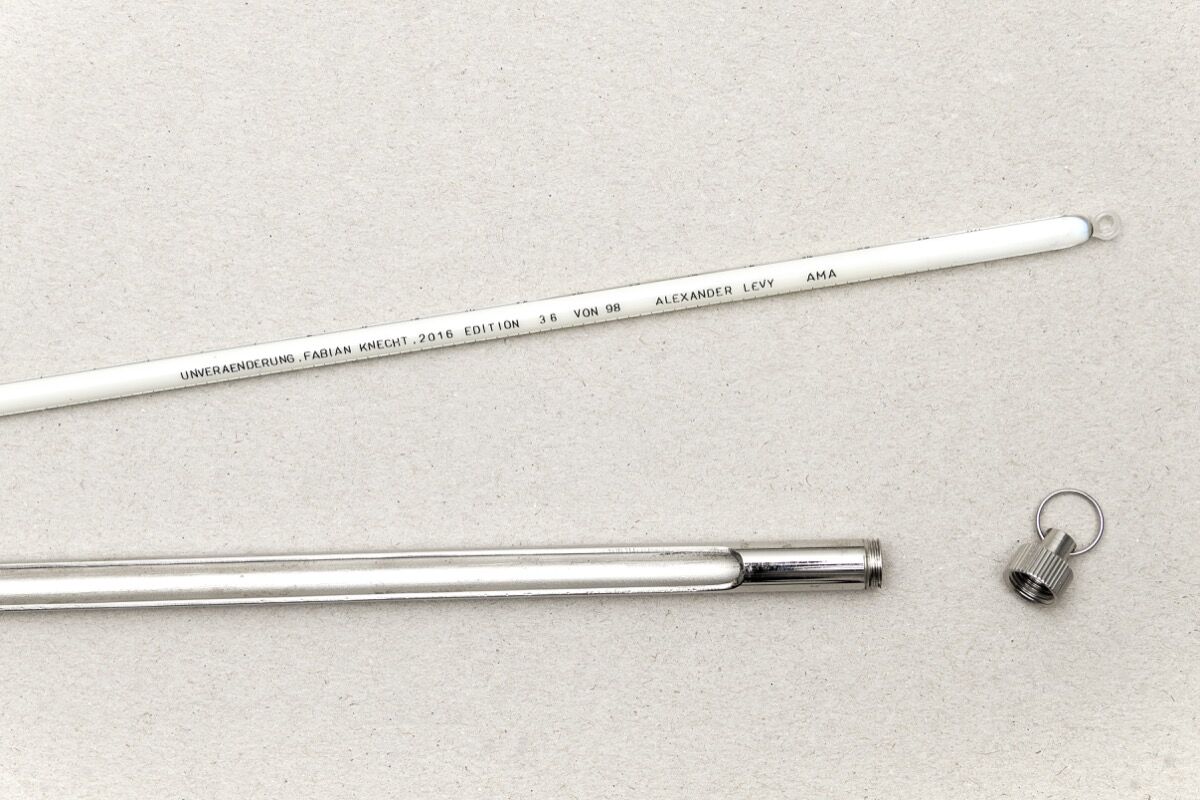 German performance artist
Knecht
is best-known for setting the roof of the Neue Nationalgalerie on fire in 2014, thick smoke filling Berlin’s skies. At Alexander Levy’s booth, his edition of 98 handmade glass thermometers are elegantly delineated across the wall, each displaying temperatures that have purposefully been reduced by 2° Celsius. Titled UNVERÄNDERUNG (meaning “unchange”) and priced at €300 each, they refer to the UN’s controversial goal, established in 2010, to limit increased global temperatures to this degree—a figure deemed moot having already been exceeded in the northern hemisphere. “He’s referring to how people deceive themselves in daily life,” said the gallery’s Lydia Ahrens, and highlighting the urgency of climate change.

WITH WORKS BY MONIKA SOSNOWSKA 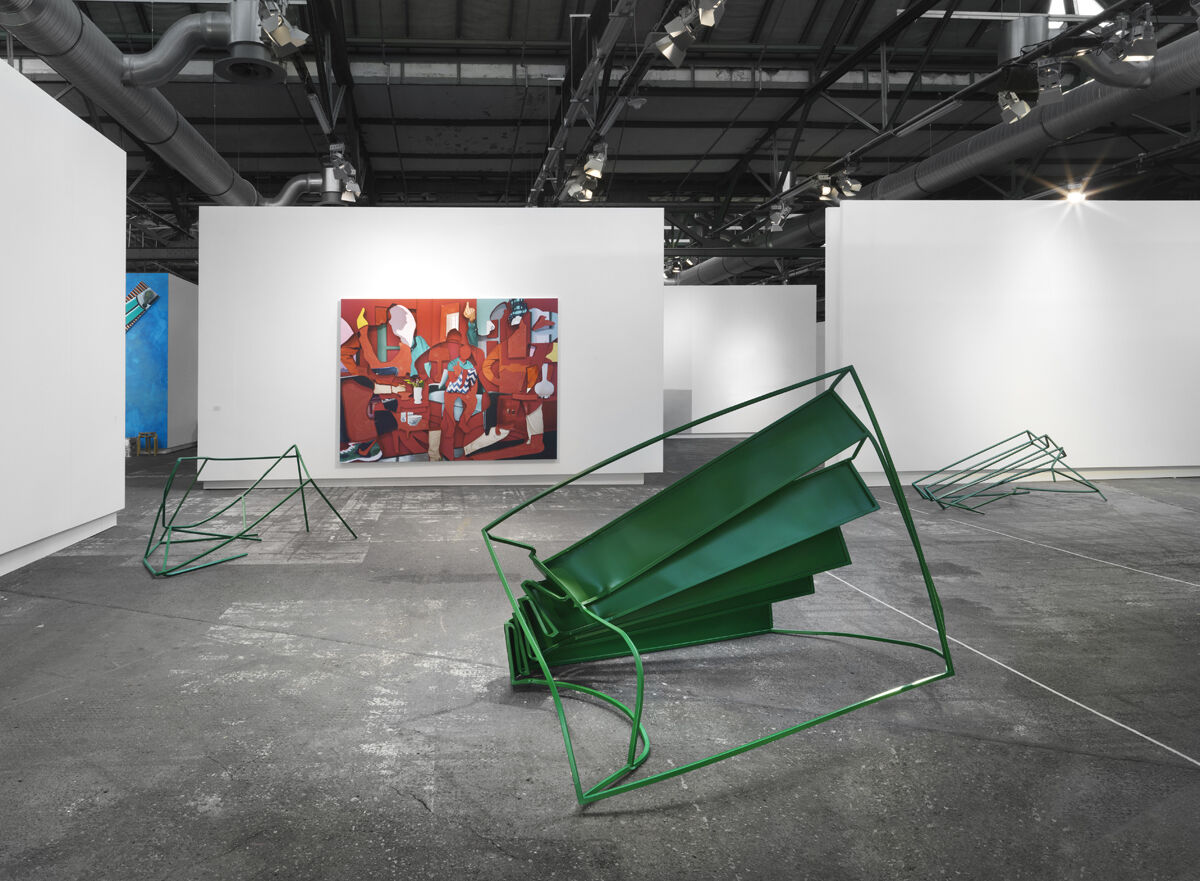 Advertisement
From the ongoing series “Market” (2013), Warsaw-based artist
Sosnowska
’s sculptures refer to Jarmark Europa, which was the largest open-air market in Central and Eastern Europe after the fall of communism in Poland. The market, allegedly known for its black market dealings, closed in 2008; taking the fated market stalls as her starting point, Sosnowska’s leaf-green, powder-coated structures depict these forms bent, compressed, and twisted, their deformities ushering them into the realm of abstract sculpture. “It’s a bigger series and the others are all sold,” said the gallery’s Svenja Schuhbauer of the works, which are priced between €65,000–75,000 depending on scale. As of Thursday afternoon, however, the three works in the booth remained unsold.

WITH WORKS BY LAURE PROUVOST 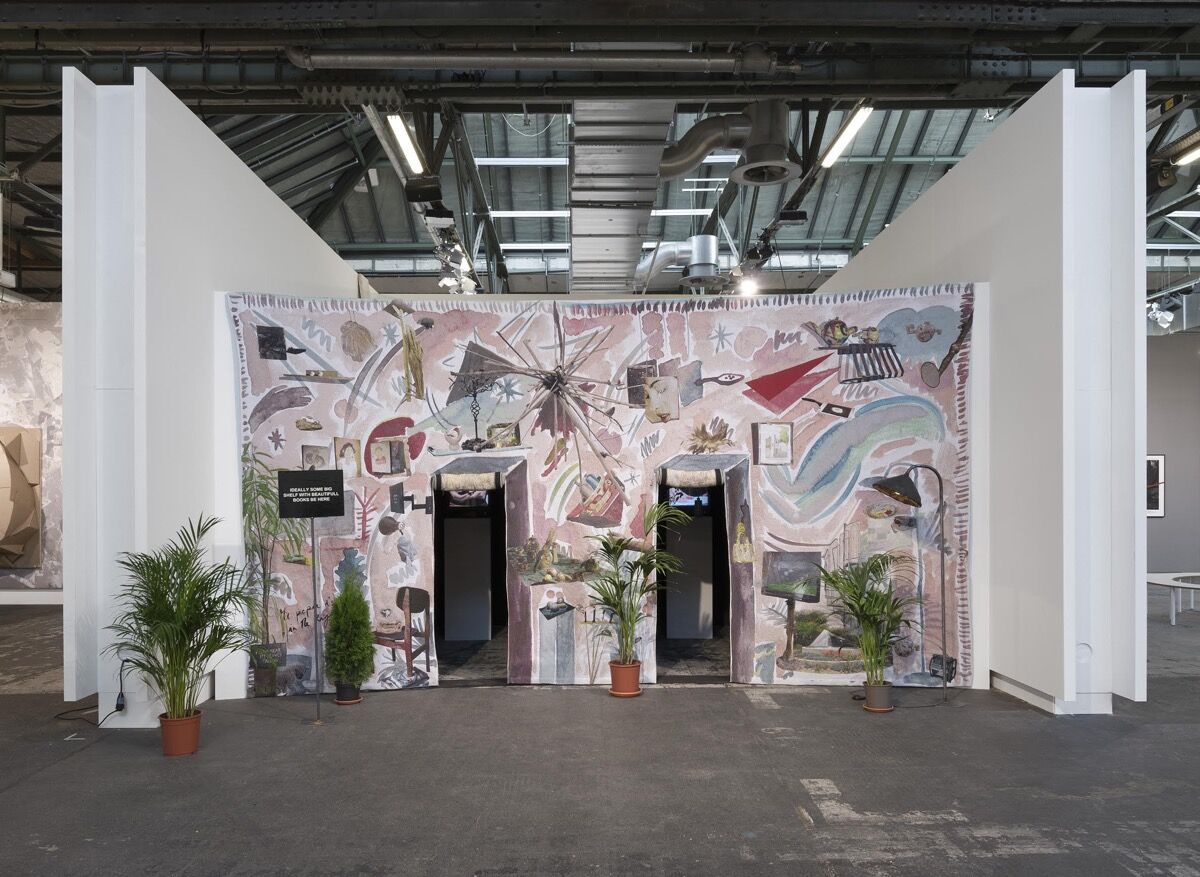 Installation view of Laure Prouvost’s behind the lobby doors, the pepper is in the right eye at Carlier | Gebauer’s booth at Art Berlin Contemporary, 2016. Photo by Trevor Good, courtesy of Carlier | Gebauer.

Commissioned for
Prouvost
’s upcoming presentation at Kunstmuseum Luzern, a giant tapestry at Carlier | Gebauer merges fiction and reality with countless embroidered embellishments—depictions of plants, lights, and eggs on a griddle, to name but a few. According to gallery co-director Marie-Blanche Carlier, the images are “a landscape of her work and past installations” where “there is the idea of a shadow world.” Behind the tapestry, a confessional-like booth results, where you can enter private dark cells to watch two videos. One of them, I Need to Take Care of My Conceptual Grand Dad (2010)—an edition of three priced at €9,200 each, of which two are already sold—shows Prouvost lovingly handling a book by
John Latham
, whom she assisted early in her career. On Friday of the fair, Prouvost will perform From the Sky (2014), mirroring imagery from the video which depicts her searching for signs of God.

WITH WORKS BY TOMASZ MRÓZ 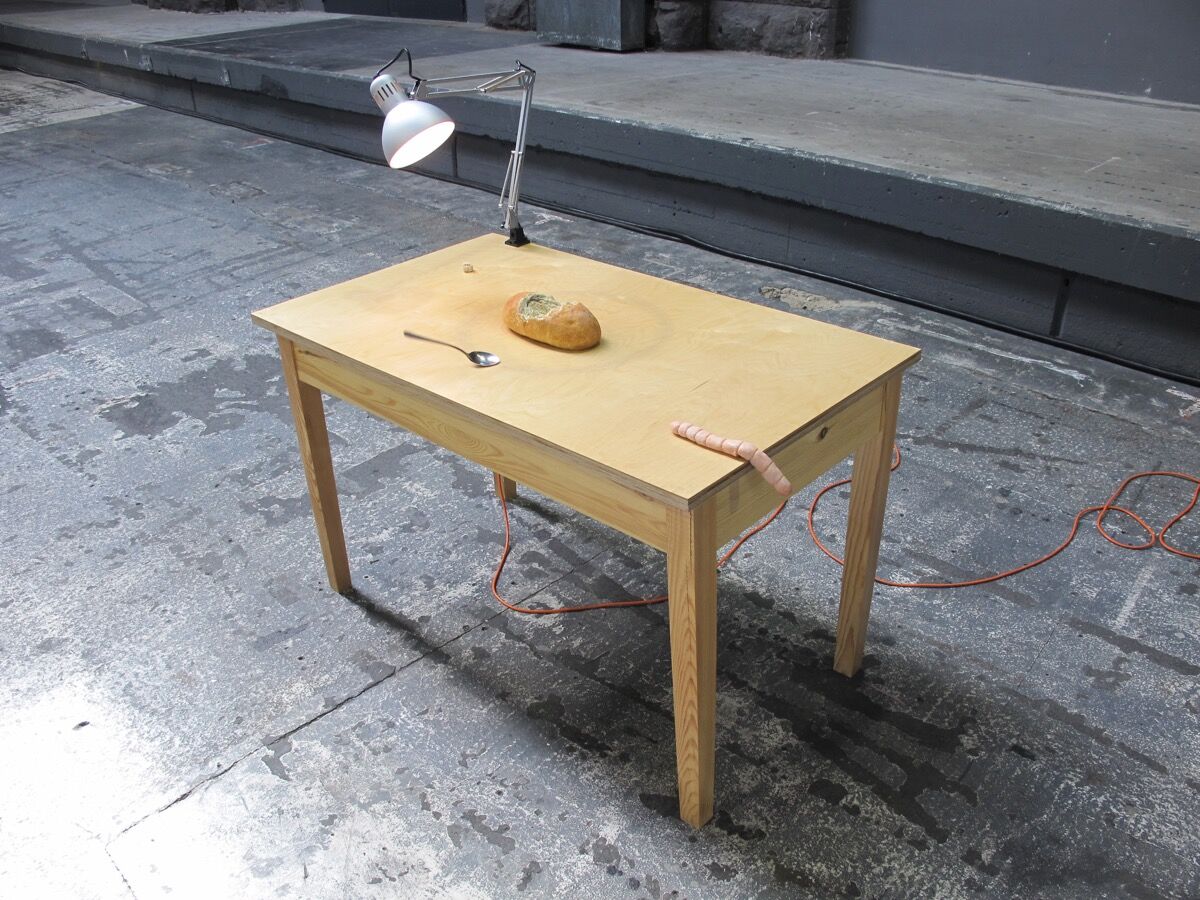 Mróz was a founding member of the renowned Penerstwo group (comprised of some of the hottest young Polish artists), many of whom studied under the pivotal teachings of pedagogical artist Leszek Knaflewski. At Piktogram’s booth, Mróz’s kinetic sculptures take on surreal and even disturbing Kafkaesque qualities. In Mother (2016; €6,500) a worm-like form is bedded down in a manger of hay, occasionally wriggling at both ends. The booth’s larger work (priced at €9,500) sees a half-eaten loaf of bread being circled by a clattering silver spoon, while a pink phallic form wriggles to escape off the edge of a table. This showing precedes his upcoming, equally surreal exhibition at Zachęta National Gallery of Art in Poland, where, gallery director Michał Woliński said, “banknotes are being printed and destroyed; some also levitate.”

WITH WORKS BY KIRSTEN JUSTESEN

Having trained in classical sculpture at the Royal Danish Academy of Fine Arts,
Justesen
, now in her seventies, went on to become one of Denmark’s pioneering figures in the feminist avant-garde scene of the ’60s. “She’s very famous but only within particular circles. We think that her work is amazing, and not only interesting to a Danish audience,” said Avlskarl gallery manager Fanny Christoffersen. Justesen’s photographic work invariably implicates her own body, and in Sculpture#2 (1968/2010), she inverts the atypical monumental nude. An edition of 6 +1 AP priced at €8,000, the work sees the artist’s naked form huddled, cramped, and attempting to hide within a cardboard box. An additional black-and-white image, Mer-Maid/Hav-Frue (1990; €10,000) shows Justesen vacuuming the seashore, waves lapping against the sodden machine, in another inversion of female stereotypes.

WITH WORKS BY ROMAN SIGNER 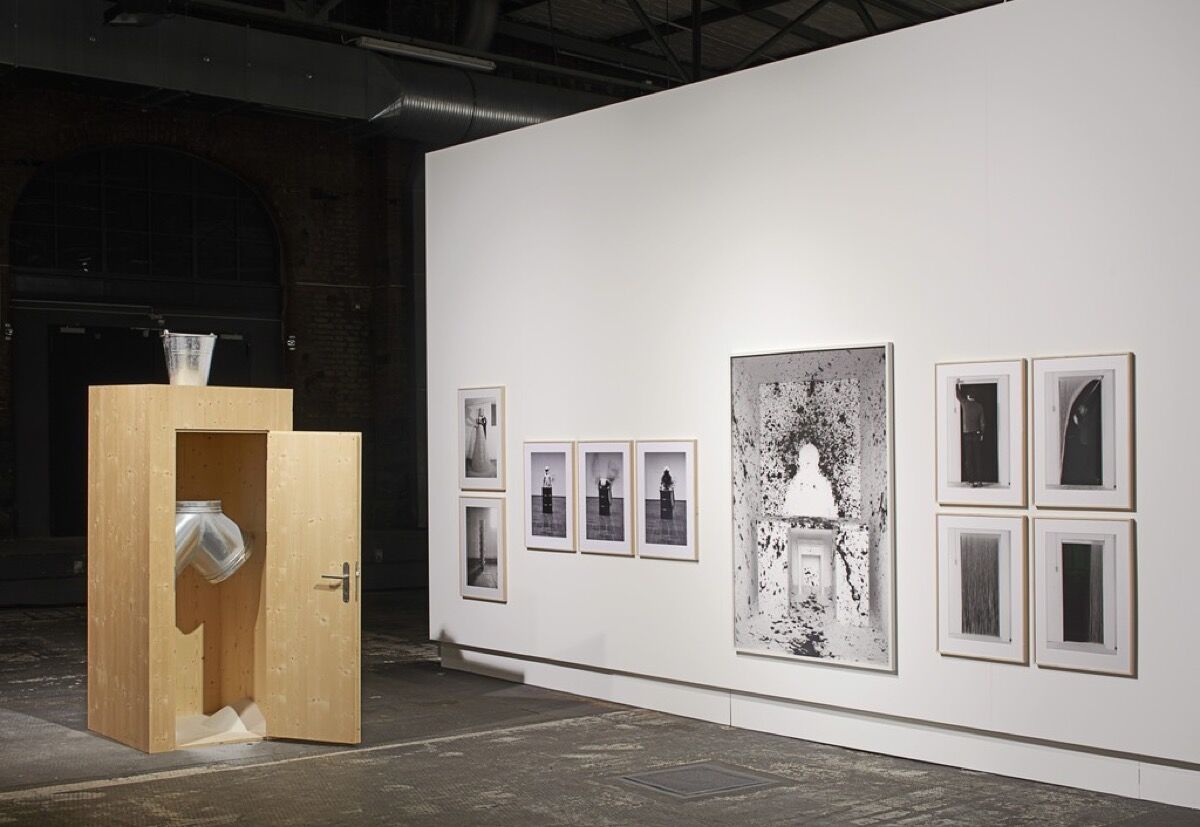 Pivotal in the ’60s to the development of time as an aspect of sculpture,
Signer
, now nearing his eighties, has what gallery director Isabell Ertl described as “the humour that Swiss people sometimes have.” Testament to this is his 2015 work Hose, priced at €87,600, which sees a two-way metal tube installed in a wooden portaloo-like cabinet. Sand was poured through the top of the tube, reminiscent of a pair of trousers, where it gathered in two piles at the bottom. According to Ertl, Signer’s work is not performance, but rather what the artist describes as “actions or events; you have the past and present in the same time frame.” Also on view, historical black-and-white photographs, priced at around €5,400, depict Signer’s participation in the 48th Venice Biennale.

WITH WORKS BY SEAN SNYDER 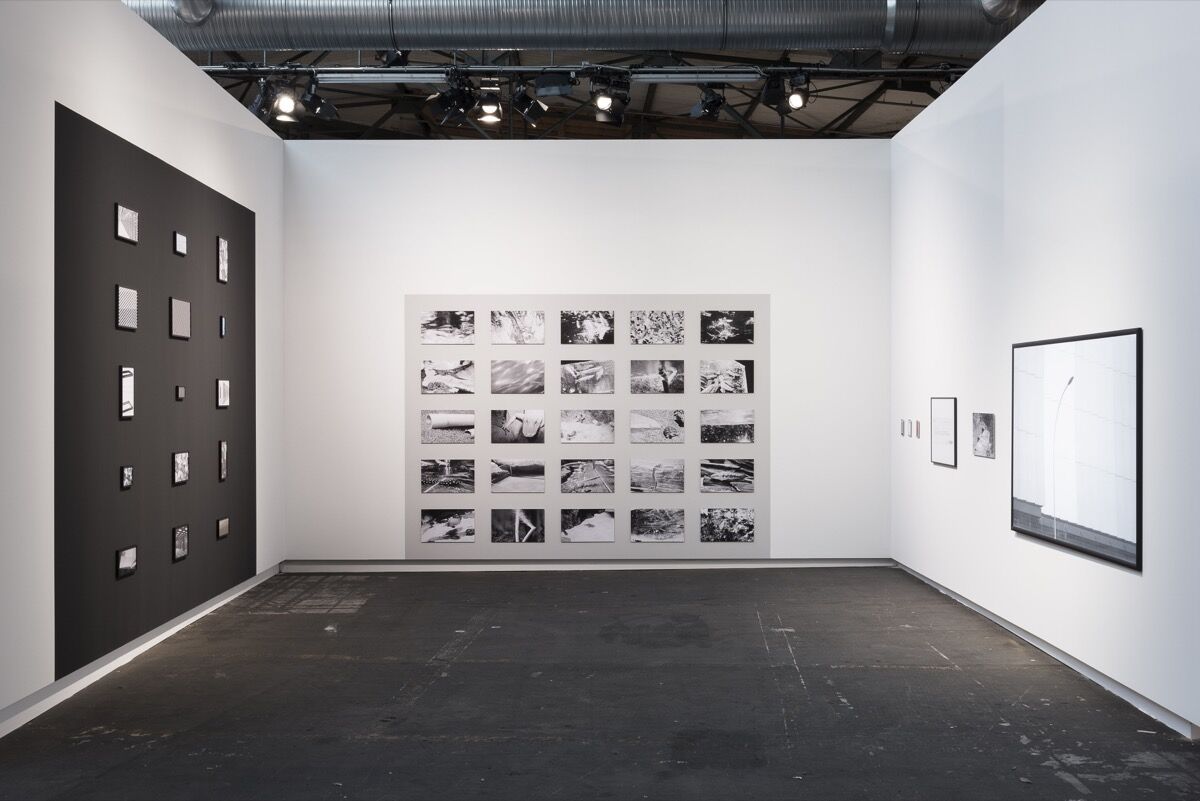 At Galerie Neu’s booth, works by Snyder, and even the way they’re hung, explore the notion of the mathematical “Golden Ratio,” which historically was believed to produce the most beautiful shapes and forms. The divine number is rounded up to 1.618033987, after which the exhibition is partially titled. “People believed that everything in nature was in the Golden Ratio, but it was later proved invalid by science,” said the gallery’s Marie-Christine Molitor of show’s concept, which also looks into 21st-century screen ratios. A light-box work, Storage (29.977 Latitude, 31.132 Longitude) (2016; €19,000), depicts the outside of a bonded warehouse in Geneva, its title reproducing the exact global positioning of the storage unit. “He’s interested in data, storing; myths about where all of the paintings and gold in the world is being stored; where does it come from, who does it belong to, nobody knows,” Molitor added.

WITH WORKS BY AYA HAIDAR 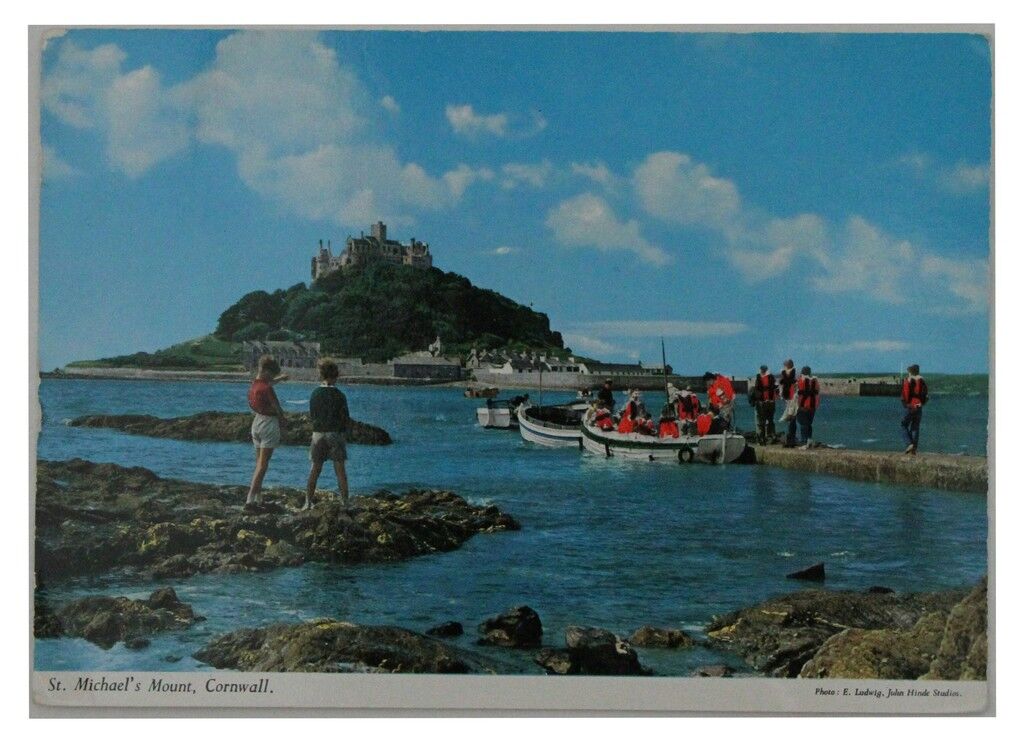 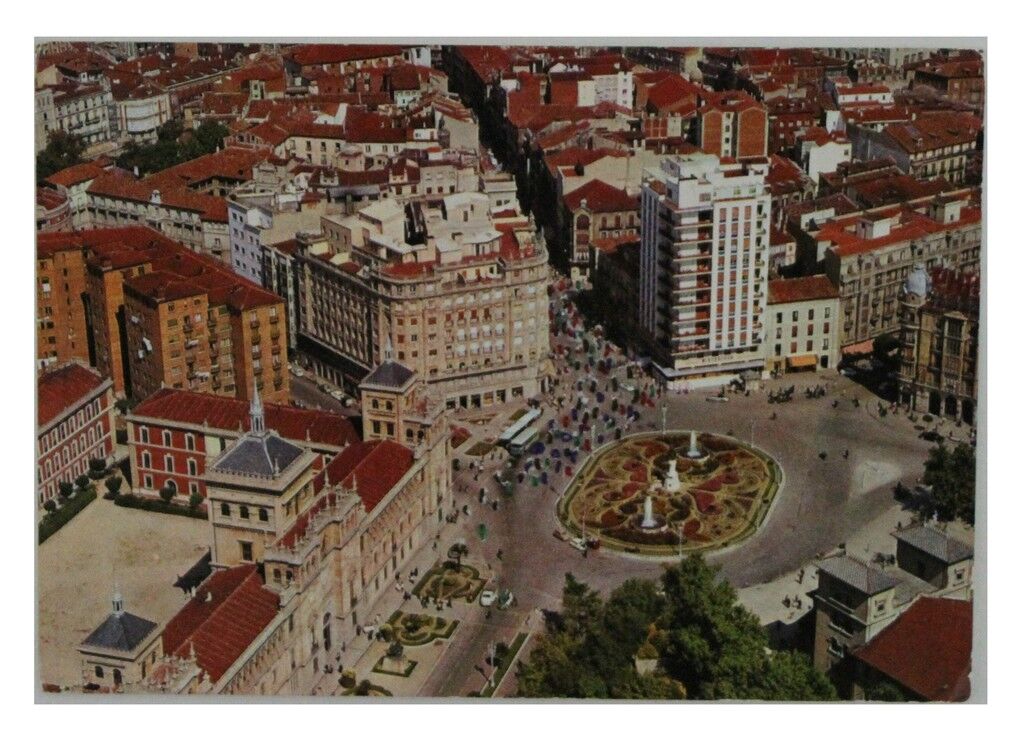 Aya Haidar
Postcard Stand 1: Untitled 1, 13, 17, 33, 43, 46, 52, 53, 57, 61, 85, 86, 2016
ATHR
Recent Slade School of Art grad
Haidar
’s poetic works see embroidered postcards stacked in racks atop white plinths. According to Athr’s Maryam Bilal, the artist “moved to England because of the war in Lebanon, so being a refugee is always a theme of her work. She wants the embroidery to expand elements in the postcards, cities, and landscapes that she finds most beautiful.” Within the works (each stand priced at £1,800) picket fences are sewn with black thread; swimmers lounging around municipal swimming pools are given lobster-red lifejackets. The series, titled “Wish You Were Here,” is “about this feeling of wanting to go home,” Bilal noted.
—Louisa Elderton
Related Stories