The 8 Best Booths at Art Cologne

Artsy Editors
Apr 14, 2016 7:15pm
The 50th anniversary edition of Art Cologne is in full swing, with 218 galleries from 24 countries exhibiting at the Koelnmesse through Sunday. While this edition of the world’s oldest art fair presents what’s likely its strongest assemblage of established international galleries to date, some of the most exciting moments come on its top floor, where young galleries present the next generation of blue-chip artists in the making. We scoured the booths to pick out the eight best presentations on display.

With works by Grace Weaver 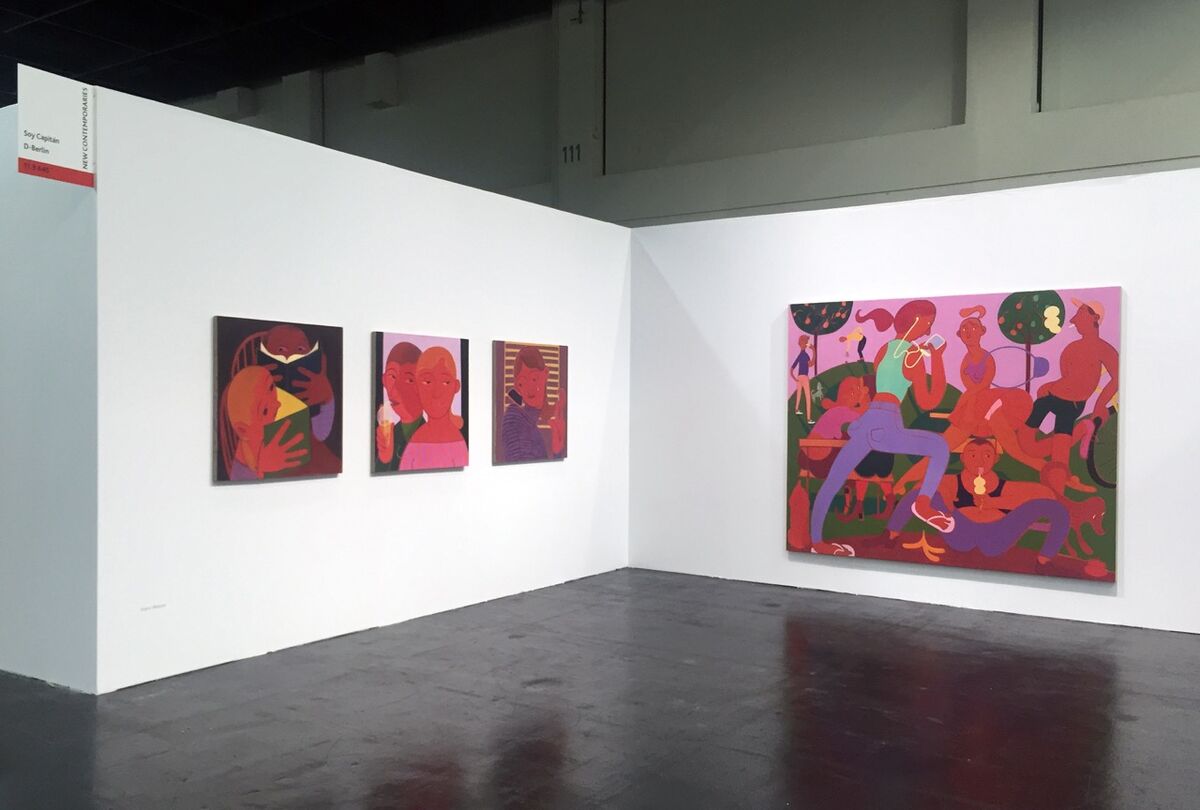 The German art world isn’t known for its love of color. So it was a risk to present a solo booth of vibrant canvases by twentysomething American artist Weaver, a standout among the recent crop of figurative painters coming into the spotlight. “She is quite well-known in the States, but it was important to build a base for her here,” says gallerist Heike Tosun of the outing, which was off to a banner start. Weaver created the booth’s largest work (lust for lite, 2015) last summer while working in the Berlin gallery, in preparation for her solo show that September. It sold for €12,500 at Art Cologne. The artist also debuts a series of drawings (available for €2,600 apiece) at the fair. “She never considered them as works for some reason. But when I was preparing for the solo booth here, I asked if she would consider making some, and I was blown away,” says Tosun. “You can really focus on her image-making, which then allows you to look at the paintings in a different way.” The booth also features three smaller paintings for €5,000 each, two of which had sold by Thursday afternoon.

With works by Michael Müller 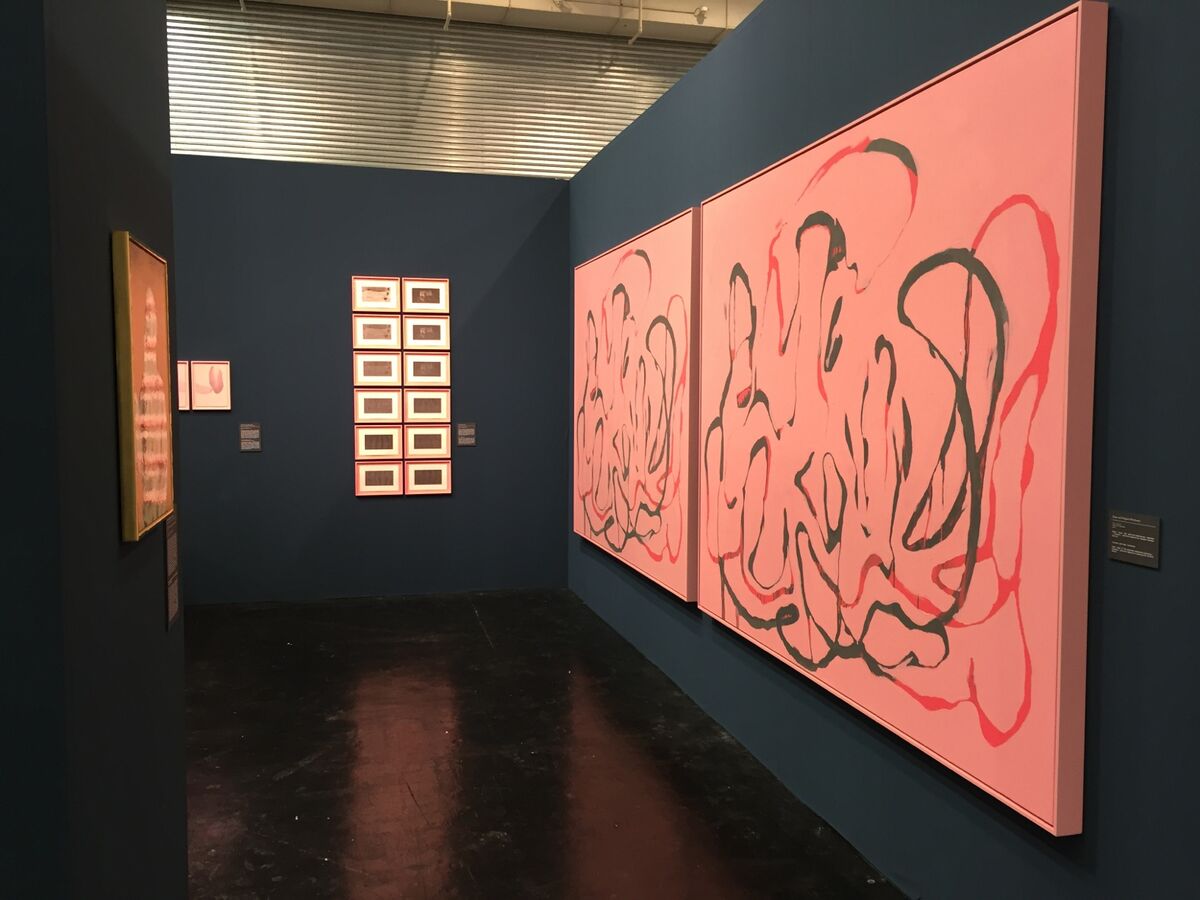 Advertisement
There are solo booths and then there are solo exhibitions.
Müller
’s is definitively the latter. The booth’s works break down the line between an original and a copy, foregrounded by a 2015 work recently shown at Müller’s recent survey at the KW Institute for Contemporary Art. The piece features a self-portrait in pencil on paper of the artist posed after Courbet’s L’Origin du monde and a piece of marble chiseled with the Wikipedia definitions of his first and last name. Nearly all the other works are created on pink sheets of A4 paper. “The first time I used the pink paper was many years ago due to the Financial Times,” Müller says. In his current project, however, pink represents cherry blossoms and the short lives of samurai (symbols the color is tied to in Japan). The work includes a copied image of a Shinto shrine, a sacred temple that is traditionally rebuilt every 20 years. Müller has Xeroxed a piece of wood from this process of reconstruction 100 times, until only a gray block is visible (12 are on view at the fair). In other works, priced from €7,000–40,000, Müller addresses the theme of originality in various ways. In one, he draws renowned forger Elmyr de Hory and one of his faked masterpieces; in another, he has an assistant copy an abstract painting he’s created; in a third, he has recreated
Gauguin
’s copy of
Manet
’s Olympia (1863). “I had a copy of the Gauguin copy made in China,” says Müller. “And I included these devils that are from the only painting that
[Henry] Fuseli
is known for, and which he made many variations of.” Give yourself some time for the booth and its detailed wall texts. It’s about as close to a real art experience that a fair can offer. 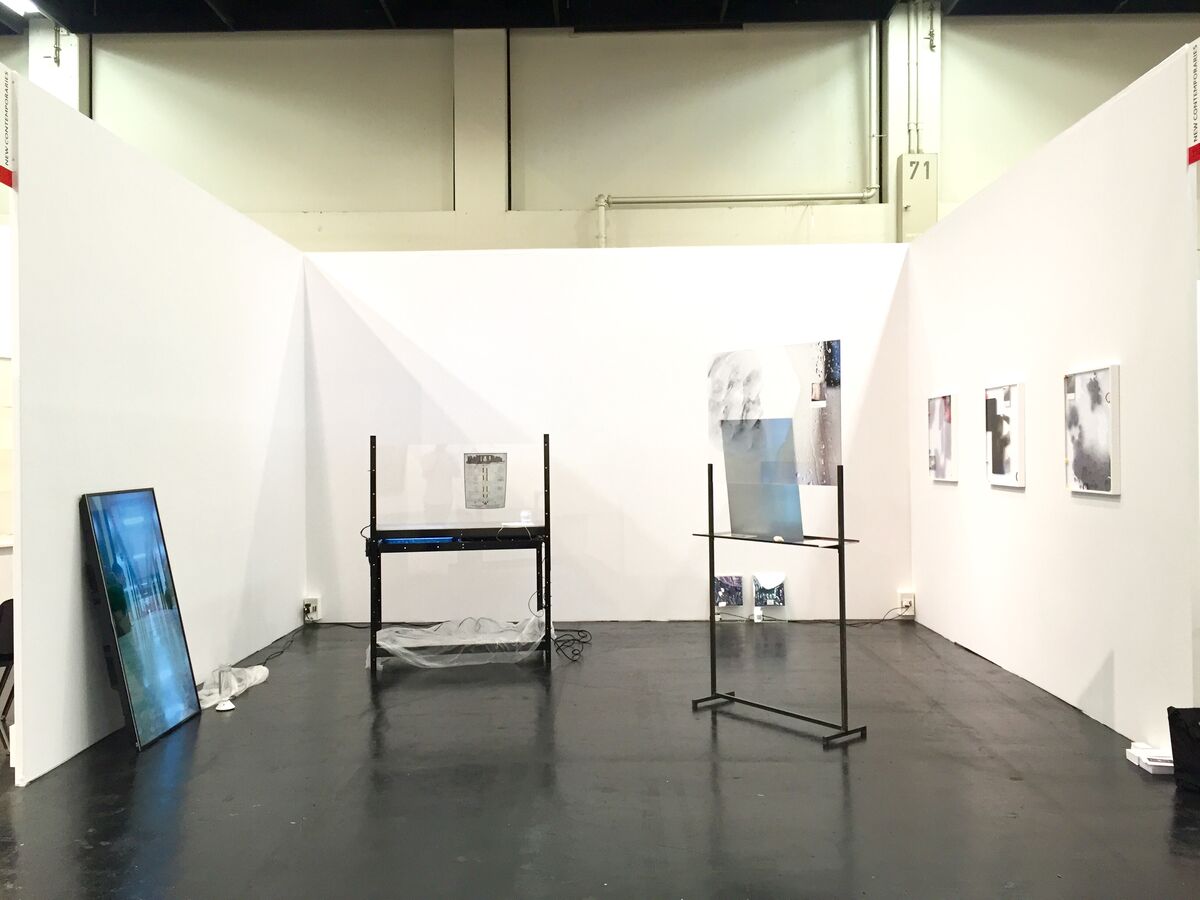 “The fair has been getting really interesting, especially in the New Contemporaries section over the past few years. I’ve been completely blown away walking around and seeing what’s on view,” says gallery director Adam Thomas of their first outing, the compliment all the more weighty considering that he’s half of the duo behind London’s beloved SUNDAY Art Fair. At Supplement’s booth,
Pattison
shows a video and a sculpture based on “MIT-henge”—the moment twice per year when the sun sets directly through the window at the end of the technology institute’s “infinite corridor.” “One of the architecture students in 1975 discovered that this took place and every year since then students and professors come together to watch it and celebrate,” explains Thomas. The works are accompanied by vaporizers which emit a mist of melatonin, the hormone that is produced when you sleep. (“We’re having a hard time staying awake,” Thomas jokes.) Melatonin production is inhibited by the blue light emitted by LED screens (which has led to the popularization of apps like f.lux and Apple’s recently released Night Shift feature for iOS), and Pattison’s screens shift to a warm tone as soon as the sun sets in Cologne, each day of the fair's run. “He’s interested in how a good night’s sleep has become a luxury,” Thomas adds. Meanwhile,
Pirecki
’s works combine snippets from her Instagram feed, earplugs, hair ties, and chewing gum on top of embossed likenesses of those objects, nearly all chosen for the way in which they are shaped by the body when used.

With works by Henrik Vibskov 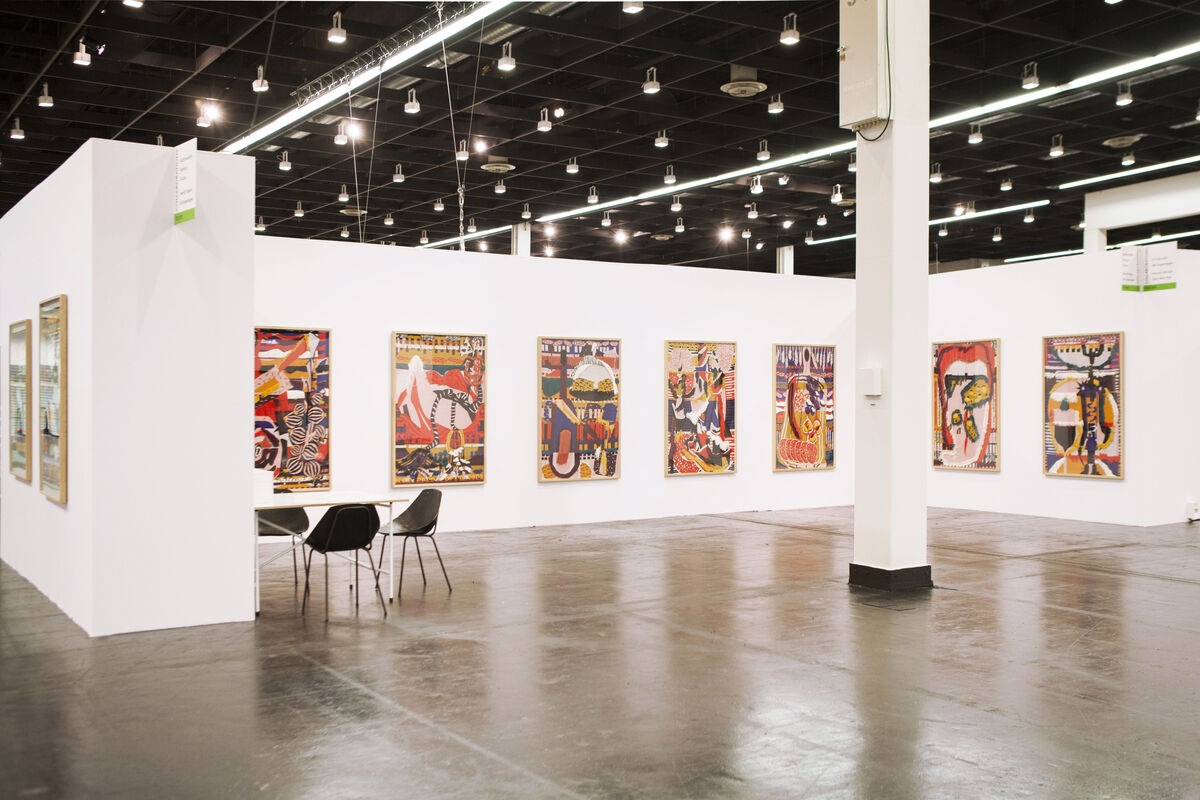 Copenhagen-based Vibskov’s creative output is more often seen on the runways of Paris Men’s Fashion Week (where he’s the only Scandinavian designer on the official show schedule) than along the aisles of an art fair. “These works are related to fashion. They’re hand-knitted embroidery on top of machine-knit backdrops,” says Ruttkowski;68’s Nils Müller. “The whole series has something to do with meat.” There are “meat-filled palm trees,” where blood sausages hang from the fonds; a sausage plate; and a butcher’s knife. “They’re really naïve in their form; that’s how his world functions,” adds Müller of the works, one of which had already sold for €10,500. (Smaller pieces and wood cuts are available for €3800.) This coming December will mark Vibskov’s third solo exhibition at the Cologne gallery, which is participating at the fair for the first time in collaboration with Wertical, a magazine founded by Müller and his girlfriend, which pairs interviews with artist portraits by the gallerist (who is also a photographer).

With works by Julius von Bismarck 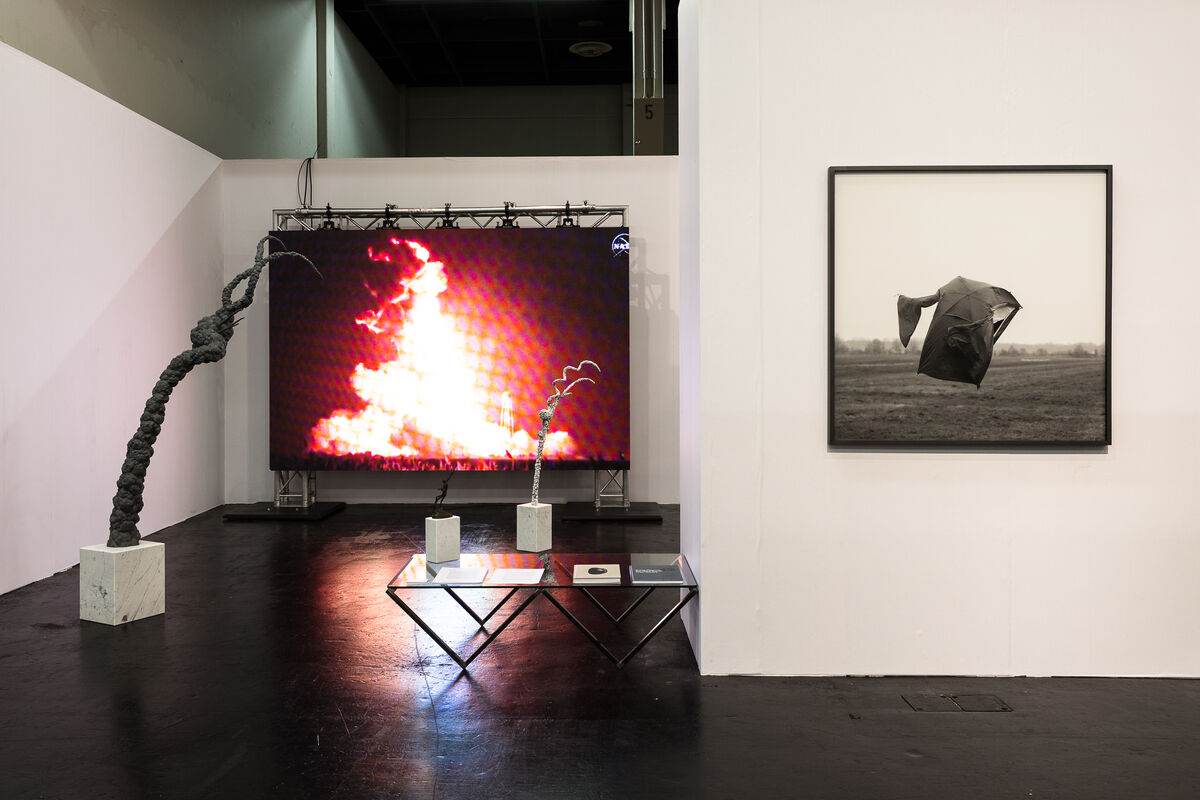 Von Bismarck continues to impress with his latest series of works based on failed rocket launches. A several-meter-wide LED panel screens Escape Shapes (2016; priced at €10,000), a compilation of every major rocket disaster from the last 70 years in a 40-minute loop. “He pulled footage from the NASA archives, from TV documentaries, even private people who had happened to capture the disasters,” says Alexander Levy. Von Bismarck has also created sculptures based on images of the exhaust and explosion of the space shuttle Challenger in 1986, among others (€16,000). “He’s trying to capture all the energy lost in that moment into this one object,” explains Levy. “Rocket science is such a symbol of the competition between nations to go further or faster than each other. But in these explosions you lose everything; you have to completely start over.” In addition, a series of photographs of tents flying through the air is priced at €15,000. 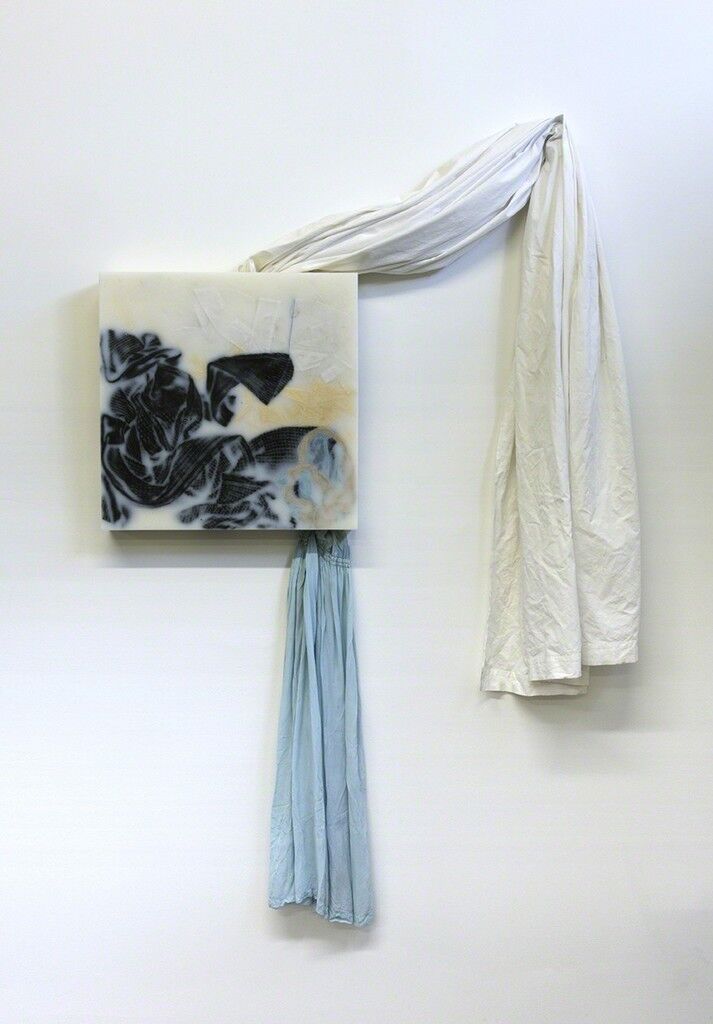 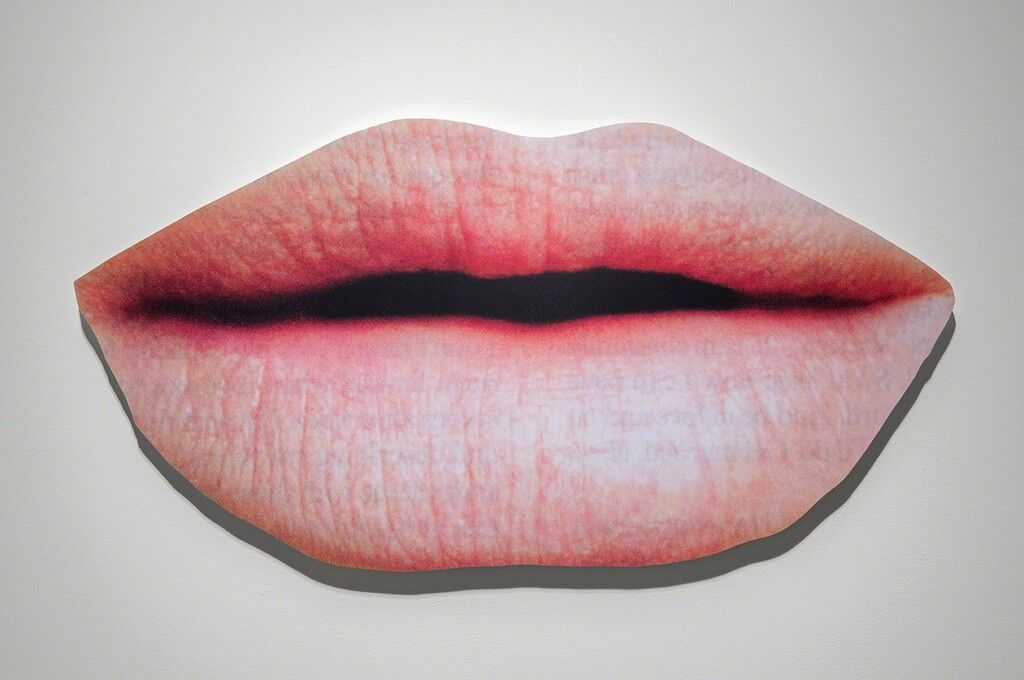 Elizabeth Zvonar
LIPS, 2015
Daniel Faria Gallery
This standout women-only show of six artists actually got its start at Art Toronto, where gallerists Daniel Faria and PSM’s Sabine Schmidt met last October. “Sabine visited the gallery and liked what I was doing. My program is mostly women, so she suggested that we create this booth,” says Faria. “Häussler was a natural choice to include. She’s mid-career but she grew up in Germany and had many shows here in the ’90s.” The artist’s works see nightgowns and negligees captured in wax, giving the surface a marble-like quality. “She’s always worked in wax, but she recently started letting the pieces of clothing spill out of the wax. The idea is that these things hold onto memories but that as time goes on those memories slip away,” explains Faria. A structure created by Schmidt’s artist Husain sees paintings by Moran, as well as those by Husain herself, installed on wooden bars throughout the space. “Nadira grew up in Paris with an Indian father of Muslim background and French mother,” explains Schmidt of the genesis of the paintings, which the artist creates on fabric typically used for clothing and scarves in India. “This series features feminist comics like a woman sitting on a man’s face,” adds Schmidt, noting the different station of women in France versus India. 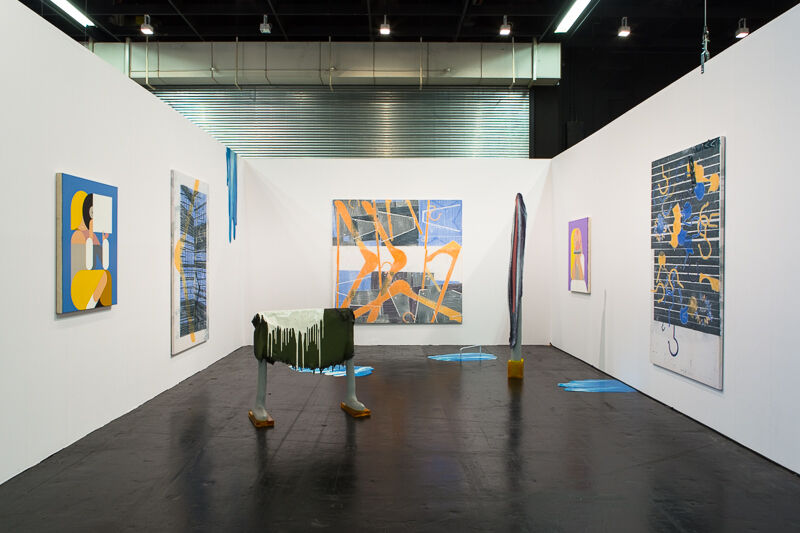 Installation view of DUVE’s booth at Art Cologne, 2016. Photo by Maria Litwa, courtesy of the artists and DUVE Berlin.

“The concept was to present very process-oriented works. Each of the artists has an intense way of making their work,” says DUVE’s Karim Crippa of the stand. Hurzlmeier’s figurative works, which play with how women are depicted in art history, are deceiving in this regard. Their flat, saturated surfaces are created by no fewer than 40 coats of paint. “He works on some paintings for three years,” says Crippa. Arnold’s works involve cutting individual strips of polyester to form a pattern—here, hangers and blind-like slats—which is then printed onto a new piece of material using an aggressive varnish which extracts pigment from the original strips.
Füllemann
’s sculptures freeze fabric or puddles of material in hapinstance forms. “He likes to let mistakes happen with the material,” Crippa adds of the sculptor, who won a Swiss Art Award in 2011 and who the gallery will show during Gallery Weekend Berlin later this month.

With works by Chris Duncan 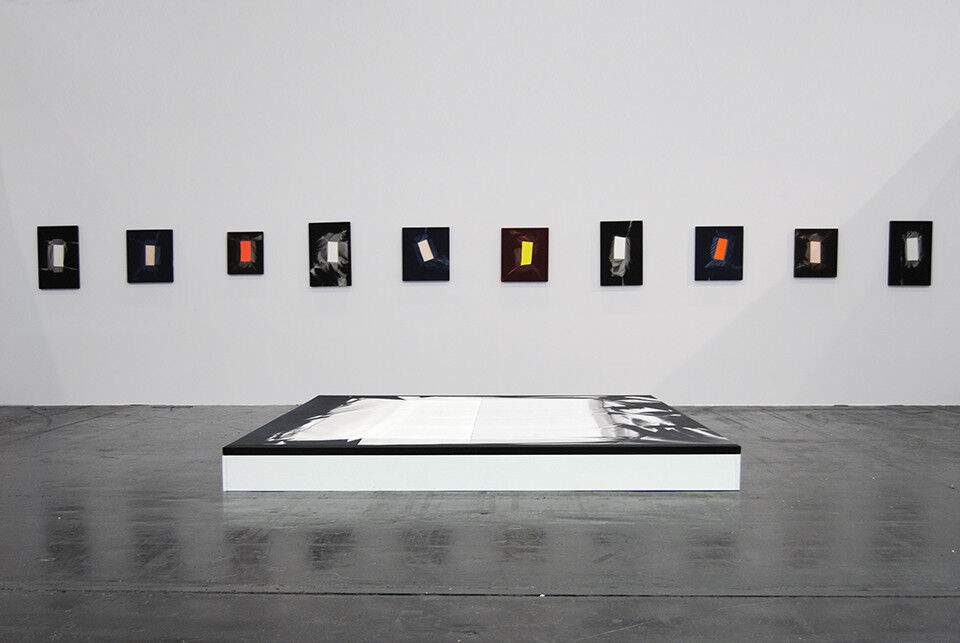 Duncan’s covetable canvases originate from what’s perhaps the simplest practice on view at Art Cologne. He exposes each to sunlight for periods of four to eight months, letting its rays sear an image onto the surface. The smallest works, available for €4000, were wrapped around a brick and placed on Duncan’s studio roof. Others were hung in front of a window, giving the pseudo-photograph a distinct depth and materiality. (They’re on offer for €14,000.) The largest piece in the booth, which rests on a plinth at its center, was created by draping the canvas underneath a large skylight. Though these works are simple in their creation, their effect isn’t. “There’s something incredibly poetic about them,” says V1’s Jesper Elg. “I had a couple of the small ones hanging in my office, which sold. But I had a very hard time taking them down and letting them go.”
—Alexander Forbes
Explore Art Cologne 2016 on Artsy.
Related Stories