The 8 Most Influential Artist and Writer Duos, from Picasso and Stein to Rilke and Rodin

Rob Sharp
Feb 22, 2016 9:56am
The French poet and writer Charles Baudelaire frequently championed the work of the great
Romantic
painter Eugène Delacroix, calling him “the most original painter of both ancient and modern times,” and returned to his work throughout his life. On February 17th, “Delacroix and the Rise of Modern Art,” the most significant exhibition of the painter’s work in London for 50 years, opened at the city’s National Gallery. Below, we explore how that pair forged their bond, and highlight some other famous creative connections between artists and writers. 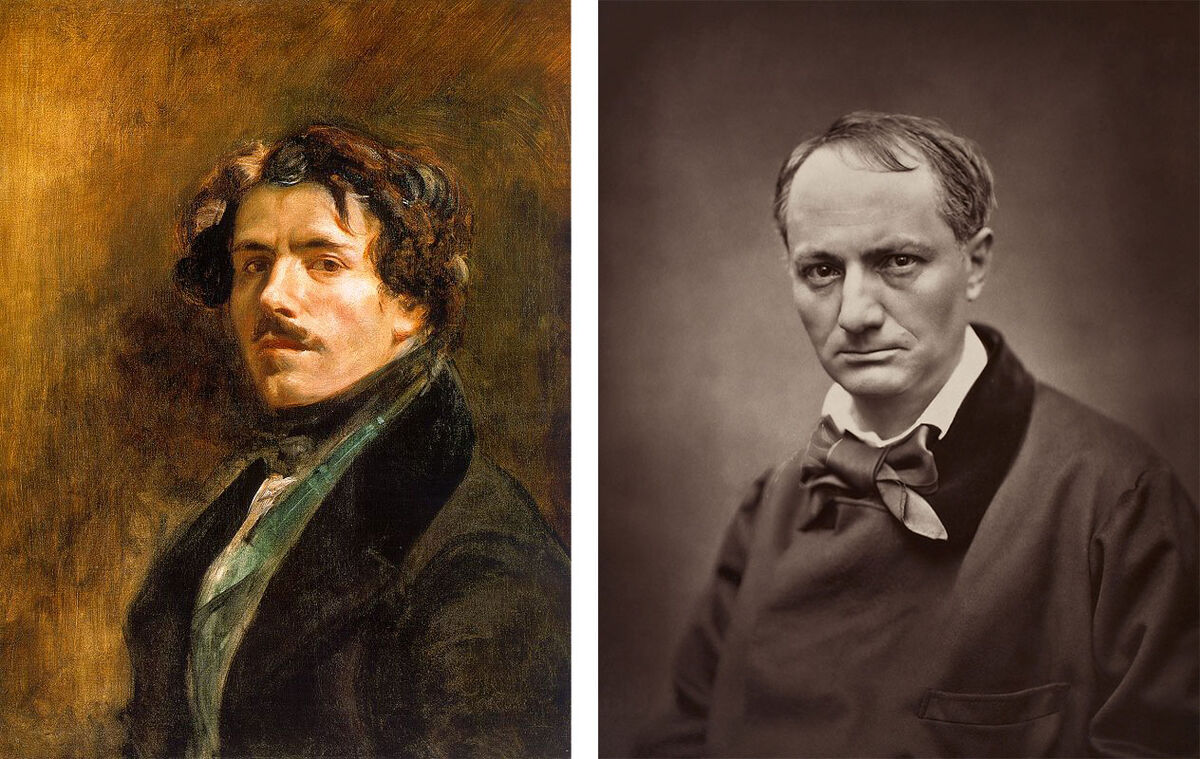 Baudelaire’s critical prose is peppered with hagiographic references to Delacroix. His review of the 1845 Paris salon compliments the painter on his technical skills. A review 10 years later contains multiple positive insights into Delacroix’s work, calling him “essentially a literary painter” and comparing him to Shakespeare.
Baudelaire attended Delacroix’s funeral in 1863, “wasted by syphilis” and “addicted to opium,” according to Ross King’s 2006 book The Judgement of Paris. Soon afterwards, the artist
Henri Fantin-Latour
began his celebrated 1864 painting Homage to Delacroix, which includes depictions of some of Delacroix’s admirers, including
Whistler
and
Édouard Manet
, alongside Baudelaire. 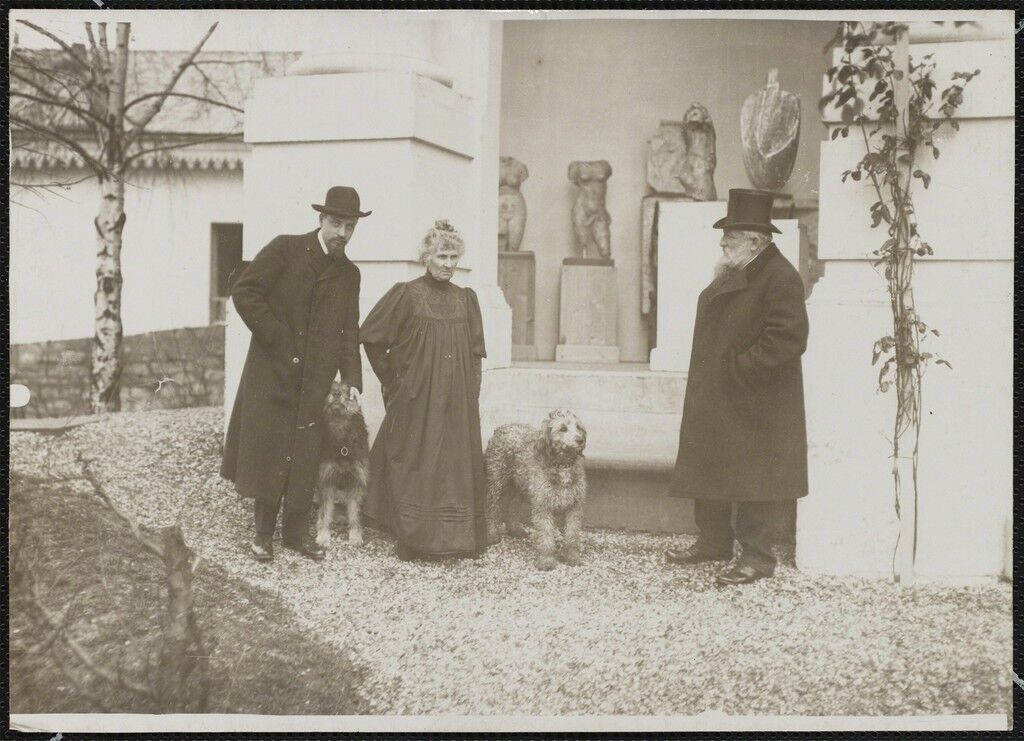 Albert Harlinque
Rodin, Rose, Rilke dans le jardin de Meudon en compagnie de deux chiens (Rodin, Rose, Rilke at the Meudon garden in the company of two dogs), No date
Musée Rodin
Advertisement
When the young Bohemian poet Rilke traveled to Paris to meet Rodin in 1902, the sculptor was at the height of his fame. Rilke had approached Rodin about writing a book-length essay on the artist’s work, which was published in 1919. He also briefly worked as Rodin’s secretary. According to art scholar William Tucker’s introduction to a 1954 translation of Rilke’s work, the poet “approached Rodin as he had earlier (and disastrously) approached Tolstoy, as an older artist of enormous reputation, whose example might give him a firmer hold on his own lyric gift.” 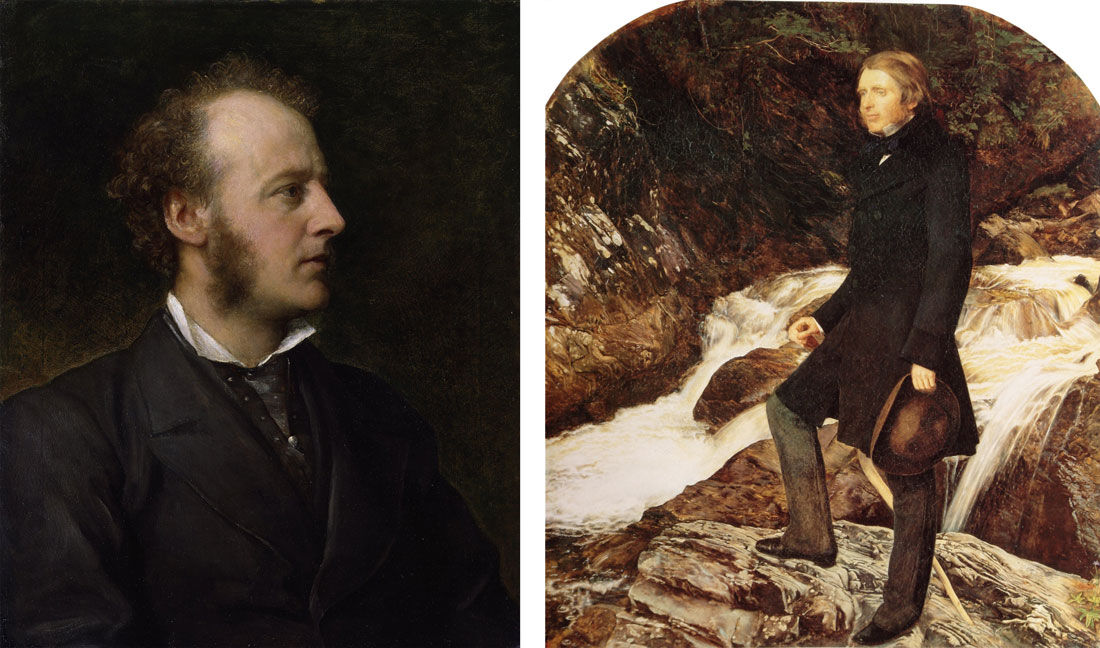 This artistic pairing has largely been dwarfed by its forming one side of art history’s most notorious love triangle. Euphemia Gray, originally the wife of the critic Ruskin, left her husband without the marriage being consummated, and later married Ruskin’s
Pre-Raphaelite
protégé Millais. Ruskin had been a prominent defender of the Pre-Raphaelite Brotherhood, and served as a patron to Millais’s early work. The artist painted both Ruskin and Gray, the latter with whom he went on to have eight children. 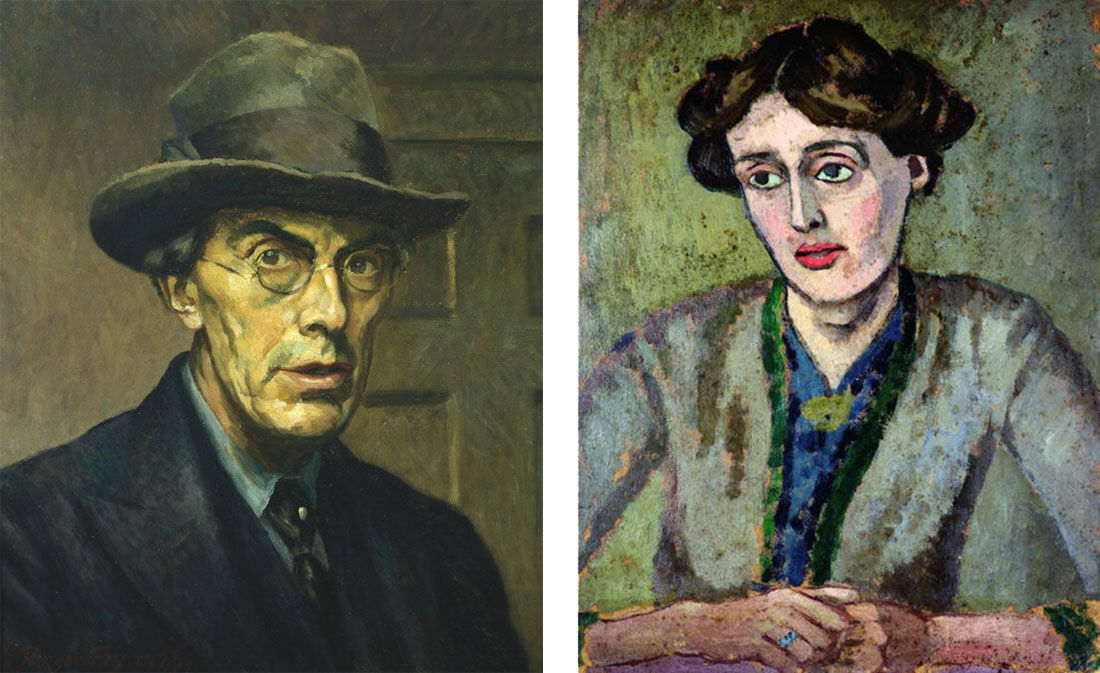 Woolf’s last book before she died in 1941, Roger Fry, a Biography, records in experimental form the life of her fellow Bloomsbury Group member. It’s hard to unpick all the relationships in such an intensely incestuous gang of creatives: Fry had an affair with Woolf’s sister, his fellow artist
Vanessa Bell
, whose portrait he had painted in 1916.
In a review, the New York Times called Woolf’s book “a finely sympathetic, searching, and objective voyage into the unknown.” With unwavering modesty, Woolf barely mentions herself in the volume, except in two excerpts of brief correspondence. In one letter to Woolf, Fry bemoans his disillusionment with socializing in high society. 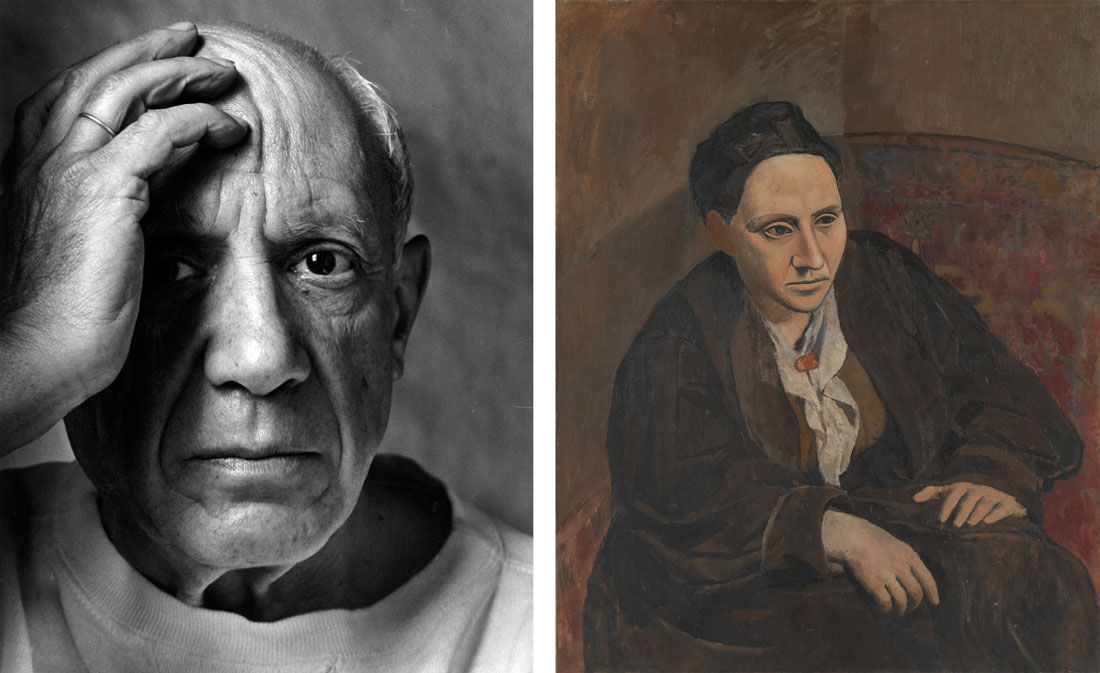 Picasso’s relationship with Stein was multifaceted—she was a patron, artistic subject, and dutiful correspondent. He began his portrait of Stein the year they met in 1905, at the end of his “Rose Period,” and she claimed to have sat for him more than 90 times. They mutually agreed on the resulting “harsh, austere depiction,” in the portrait, according to Laurence Madeline’s preface to a 2005 edition of Stein and Picasso’s correspondences. “The radicalization of a primitivist tendency common to both of them…was to become the cornerstone of their respective oeuvres,” writes Madeline. Stein was later referred to as “the Cubist of Letters.” 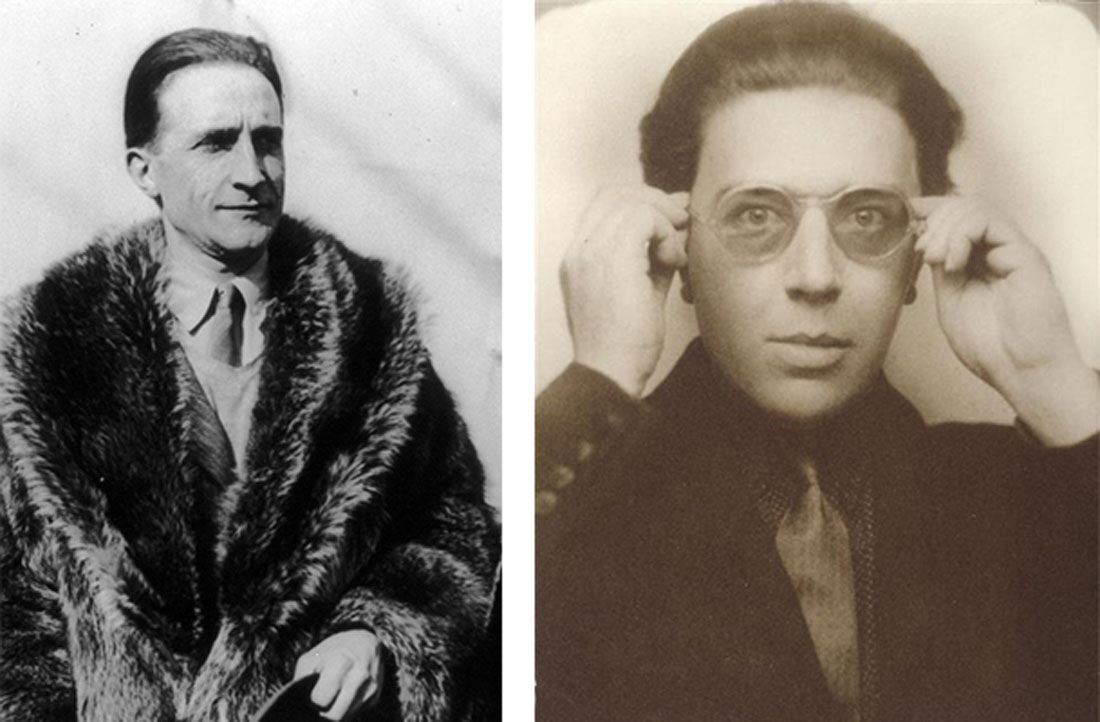 The French writer and
Surrealist
lynchpin Breton was a long-term collector of and advocate for Duchamp’s work. The artist designed the door to Gradiva, a Paris gallery that Breton managed in the late 1930s. The pair collaborated on an aborted attempt to document Surrealist history in New York magazine Flair some 20 years later. Upon Breton’s death in 1966, Duchamp is quoted as saying in 1995’s Revolution of the Mind: “For me, he incarnated the most beautiful youthful dream of a moment in the world.”

The influential critic Rosenberg and the
Abstract Expressionist
artist Krasner worked alongside each other for the Public Works of Art Project, a program that employed artists during the Great Depression. The two traded intellectual blows, though they remained friends. Rosenberg introduced Krasner to writers such as Baudelaire and Rimbaud. The latter poet was a source of inspiration to Krasner, and she inscribed his poem “A Season in Hell” on the wall of her studio. In a 1977 video, Krasner suggests Rosenberg could have been a “closet painter.” 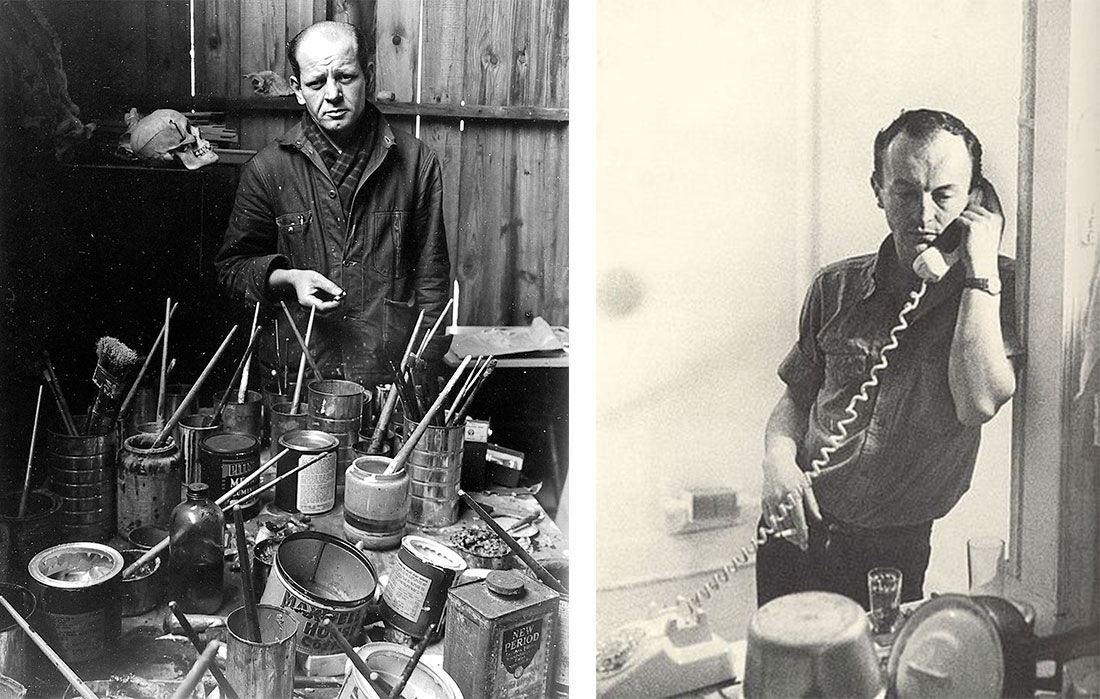 O’Hara joined New York’s Museum of Modern Art as a special assistant in 1955, and later worked as an associate curator there. His 1959 book on Pollock, the first monograph on the artist, was in the “poetical” school of criticism, according to Marjorie Perloff’s 1977 work on O’Hara, Poet Among Painters. At the time of O’Hara’s death in 1966, the poet was working on a major Pollock retrospective at MoMA. The painter also influenced O’Hara’s poetry, including Poem (the eyelid has its storms…) (1955), an attempt to capture what the poet calls “the tragedy of linear violence” in Pollock’s “all-over” paintings.
Rob Sharp
“Delacroix and the Rise of Modern Art” is on view at the National Gallery, London, Feb. 17–May 22, 2016.
Related Stories