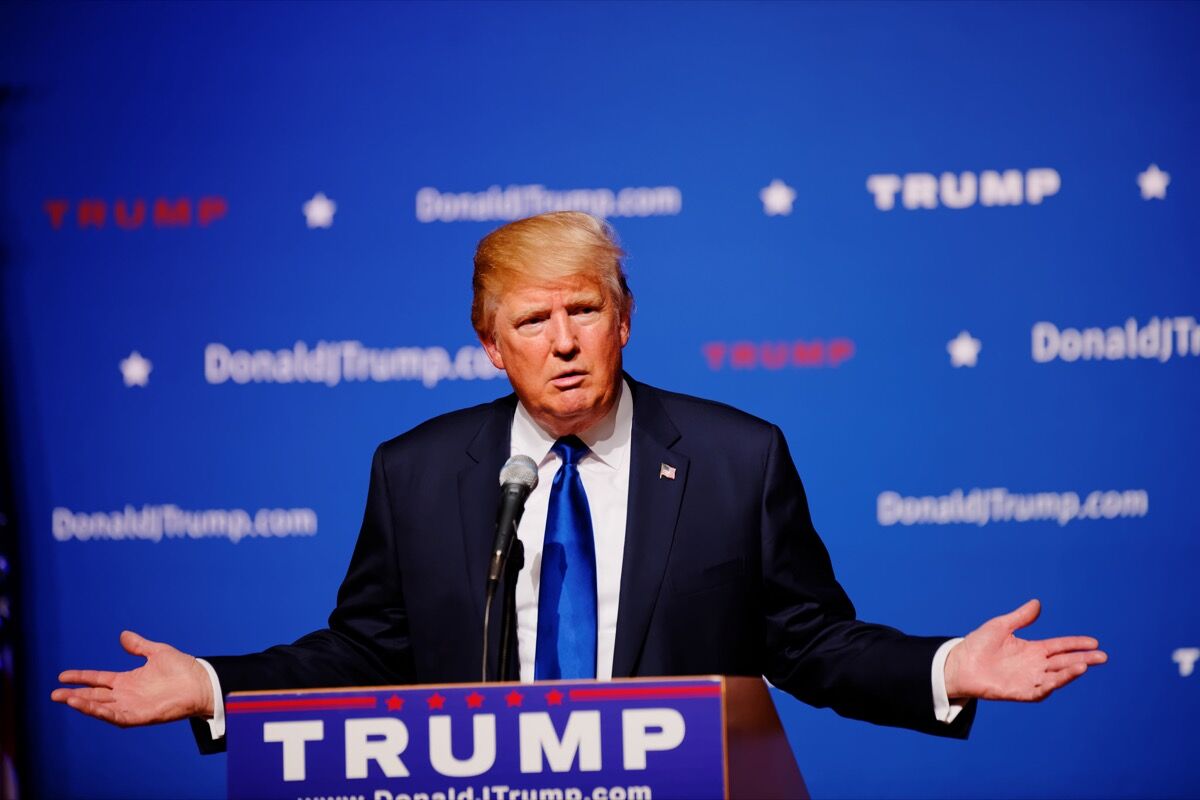 Writing in the Washington Post earlier this week, columnist Philip Kennicott wondered how the arts would fare under a Donald Trump presidency. The column is “a sketch of how the arts might accommodate to a new political reality,” a work of fictional realism in which Kennicott conjures a creative community struggling under the pugilistic rule of an authoritarian Trump presidency. Kennicott doesn’t focus his imagination on works of art themselves, but rather thinks about the systems in which art is created and exists. In his telling, the economic uncertainty wrought by a Trump presidency has caused corporations to siphon philanthropic funds, leaving nonprofits in dire straights, all while a general climate of censorship has artists and institutions scared to satire the new president.
In short, he imagines a total collapse of the arts world as it currently exists—all within two years. But would this happen? And aren’t there more important things to focus on than the art world should Trump be elected?

This Isn’t about the Art World

There are many worrying economic and social factors that caused the rise of Trump, and no shortage of things to fear should he be elected president. Though the polls currently have Hillary Clinton cruising to victory in November, it would be a mistake to think of Trump’s defeat as a certainty or treat the groundswell of disaffected white men who handed Trump the nomination as vanquished should he lose. Conventional wisdom scoffed when Trump declared his candidacy, but as the Republican primary results came in, the media think-pieces slowly shifted from “Why Trump Can’t Win” to “What Would Happen If Trump Wins.” If the former represents a failure of imagination tinged with bias, the latter can often be an inverse reaction, a hyperactive imagination tinged with nightmares rather than anchored to analysis.
In order to prevent the most horrific events from occurring, it is crucial to imagine them as actual so that steps can be taken to halt them from ever manifesting in the real world. Kennicott does create his future with commendable surety, though I doubt many in the art world are backing Trump or need convincing that his presidency should be vehemently opposed.
Regardless, if Trump wins the presidency, the fate of arts funding shouldn’t be the first, second, third or twentieth concern. The arts can’t be disentangled from Trump’s general bent towards authoritarianism or his general incompetence. They would no doubt fare poorly under his administration, perhaps even to the degree outlined by Kennicott. One interesting twist in his tale is to picture a scenario in which Trump doesn’t defund the National Endowment for the Arts—a dream of conservatives for years—but rather turns it into an organ for funding right-wing art.  But some of Kennicott’s suggestions—like that a judge would award a $140-million-dollar judgement for libel against a group satirizing administration officials—strain the imagination.
Perhaps that strain is a good thing, but the mental weight should be lifted elsewhere. Trump is a man who has stirred up xenophobia and nationalism, clearly has no grasp of international politics, doesn’t know how to fund the wall that is the center of his campaign, wants to slash taxes on the rich, advocates for abolishing the Department of Education and the Environmental Protection Agency—and seemingly changes his policies on a whim. And yet he is one of two people who could be the next president of the United States. (Saying this is not endorsing Hillary Clinton.)
This election isn’t about the arts. Yes, works of art offer important criticism of political events, provide ways to mobilize against the status quo, and allow us to imagine a path beyond a two-party binary. But if we’re conjuring the very real possibility of a Trump presidency, one can’t neglect the tangible impact his policies would have on minorities, women, and other marginalized groups. Of course a climate of censorship and intimidation, mixed with Trump’s disdain for the first amendment and proclivity for authoritarianism, may well impact the arts in important ways that can’t be ignored. And of course Kennicott isn’t arguing the arts are the reason not to vote for Trump. But with stakes as high as these, it’s important to maintain focus on the most fundamental issues with his potential presidency.

This major caveat aside, if we are going to imagine the arts under Trump, let’s refrain from speculation unanchored by analysis of the candidate’s own policies. Let’s also factor in the history of Republican attitudes towards the NEA and other arts organizations. Doing both these things elucidates broader points about Trump and produces analysis of his candidacy with resonance beyond the art world. Mainly, it becomes clear that though Trump sometimes seems remarkably unhinged compared to his establishment counterparts, many of his articulated policies are standard Republican ideas minus any sugar-coating or false rhetoric.
In response to questions put to the candidate in the Washington Post by reporter Alyssa Rosenberg, Trump indicated how he’d treat the NEA. “The Congress, as representatives of the people, make the determination as to what the spending priorities ought to be,” he told Rosenberg. Trump’s answers in this interview have a clarity and coherence that lead one to believe they were typed by polished PR hands rather than the horse’s mouth. Still, taken at face value, they spell trouble. Though federal funding for the arts is already so low it’s practically irrelevant, a deferral of the NEA’s fate to what could well remain a Republican Congress would be a bad thing for the agency.
Just look to the budget proposal of House Speaker Paul Ryan—seen now as the stalwart representative of the Republican establishment—put forward in 2014. It called for the ending of all federal funding to the National Endowment for the Arts, the National Endowment for the Humanities, the Federal Institute of Museum and Library Services, and the Corporation for Public Broadcasting. Ryan argued that funding these agencies is too far afield from the core mission of the federal government and that they should look to the private sector for budget dollars.
Meanwhile Breitbart—the conservative news organization whose chairman, Stephen K. Bannon, recently took a leave of absence to be the CEO for Trump’s campaign—has also run anti-NEA stories which claim the organization funds leftist art that the website sees as contrary to American values. The connections of these pieces to the truth is tenuous at best. Interestingly, in a hatred for the NEA, one finds an overlap between classic fiscal conservatives, like Ryan, and members of the new or alt-right like Bannon. It is seen both as not the purview of the federal government and as supporting an assault on “traditional” family values.
The desire to defund the NEA dates back to well before Trump’s or even Ryan’s ascendance. Congress in the 1980s slashed the budget drastically, and the culture wars of the ’90s saw Republicans battling with President Bill Clinton over funding for numerous agencies, the NEA among them. Though Republicans failed to defund the agency back then as hoped, and the support witnessed for the agency then makes it doubtful they would succeed today, they still dealt the NEA a major blow (to the tune of a 39% budget decrease, funding eventually restored). More lastingly, they have instilled in the agency a cautiousness to engage with overtly political or controversial subject matter. This reticence for controversy, which persists to this day, has kept the spotlight off the NEA and its funding actually rose during George W. Bush’s administration. This truce between the NEA and the executive and legislative branches is certainly weary.
Another scenario Kennicott outlines is an attack on art institutions that show works with a political bent and a subsequent failure of Trump to condemn the violence. This has happened before, under President George H. W. Bush, typically seen as far more moderate. Artist
Dread Scott
’s 1988 work What is the Proper Way to Display a U.S. Flag? asked visitors to stand on the stars and stripes as they wrote answers to the work’s central question. It prompted a right-wing furor. In response Congress passed a law against so-called flag desecration (it was overturned by the Supreme Court) in an attempt to make Scott’s work illegal. The artist received threats on his life. President Bush didn’t defend the work on first amendment grounds or talk about its importance in fomenting a national dialogue. Instead, he called it “disgraceful.” Running that through Trump’s thesaurus yields more colorful and violent language. But in articulating a Trumpian future, we should always look back at the past so as not to forget who uttered the words to begin with.
Isaac Kaplan is an Associate Editor at Artsy.
Related Stories