George Philip LeBourdais
Mar 25, 2016 7:29pm
San Francisco has the best of the world’s culture—or so the Panama-Pacific International Exposition (PPIE) of 1915 would have it. The PPIE not only marked the completion of the continent-splitting Panama Canal and assembled some of the world’s most provocative works of art, it also strove to show San Francisco resurgent after the destruction wrought by the 1906 earthquake. An exhibition at the city’s de Young Museum last year, celebrating the centennial of this historic event, opened with an artwork that revived San Francisco’s claim as a cultural beacon: a mural by local painter
Arthur Frank Mathews
titled The Victory of Culture over Force (Victorious Spirit) (1914). 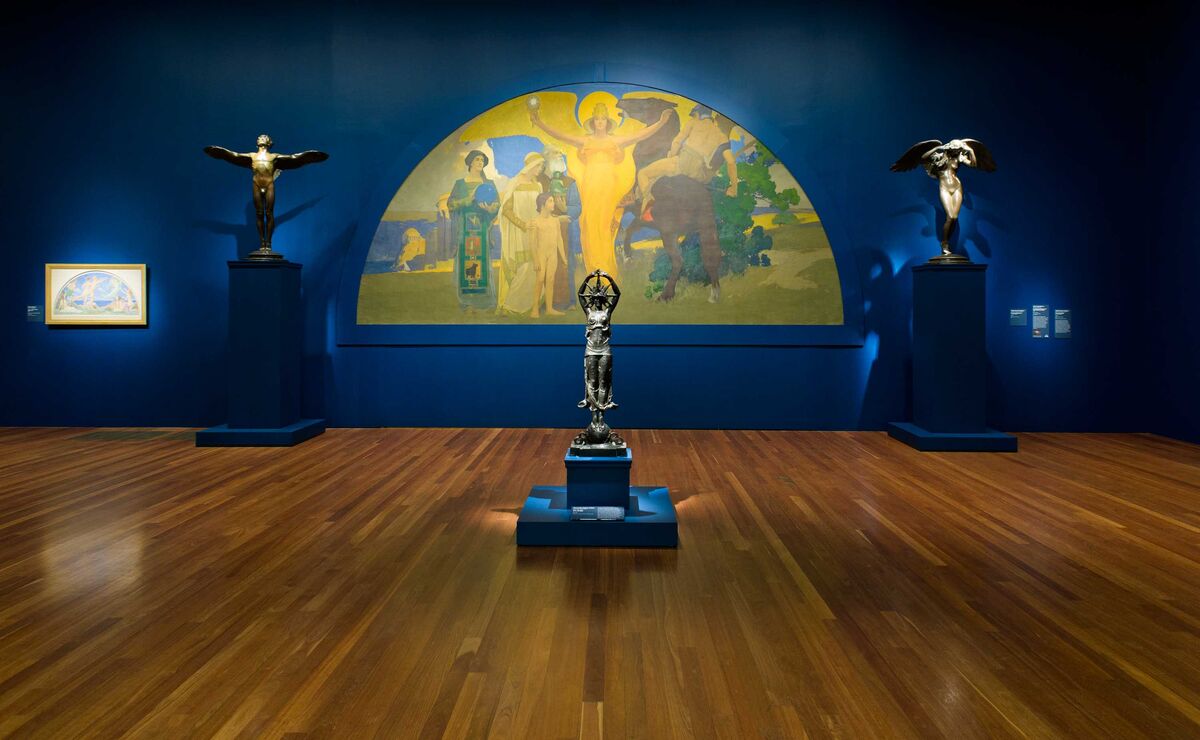 Installation of “Jewel City: Art from the Panama Pacific International Exposition” at the de Young Museum. Courtesy of the museum.

With a central angelic figure sheltering, at left, personifications of Youth, Philosophy, Religion, and Art from a sword-wielding cavalryman at right, the mural’s historical reference is to the menaces of materialism and war. With a brightly rendered San Francisco Bay and a bent and puffy California Oak slanting across its background, this freshly revealed work also evokes the city’s contemporary struggle: nurturing art, culture, and knowledge while weathering the dramatic change swept in by the tech economy. What is the state of art in the San Francisco Bay Area today as it brokers deals between these sometimes oppositional forces?

The Bay Area was a beacon for artists, political revolutionaries, and counter-cultural ideals before it became the epicenter of forces that have changed the way people interact and do business across the world.

In one ranking of art’s most influential cities in 2015, a hundred years after San Francisco’s triumphant showcase, the City by the Bay fails to crack the top 15, falling below Detroit, “America’s Berlin,” a place full of creativity and cheap rents. The Bay Area has one of those things, but not the other. San Francisco is the most expensive rental market in the country (across the Bay, Oakland is fourth), while home prices in and around Palo Alto, some of the priciest zip codes in America, constantly defy sanity.
At about one million dollars per bedroom, buying a house leaves little money, one imagines, for an art collection, and scant space to install one. But the Bay Area and Silicon Valley now make up the second largest concentration of billionaires in the world, and the art establishment has for some time been wagering that some of that wealth would find itself back into the community, drive a new collector base, and counteract the crippling impact of rising costs. Photo of San Francisco from Telegraph Hill by (matt), via Flickr.

Advertisement
When Stephen Wirtz Gallery, a mainstay of the Bay Area art community for decades, shuttered its doors in August 2014, it seemed an elegiac answer to the question of whether once-bohemian San Francisco was losing its soul. Wirtz was a high-profile casualty of the spiking rents that forced so many galleries out of addresses like 49 Geary, the long-standing central pillar of San Francisco’s gallery culture and a champion for art along with the nearby San Francisco Museum of Modern Art (SFMOMA). (Stephen Wirtz has since reformulated online-only as Wirtz Art, run out of a home in Oakland.)
Two years later, with tech investments cooling, a series of openings paints a brighter picture. SFMOMA itself will reopen in May after a three-year closure for renovation, with a dramatic redesign from architecture firm Snøhetta, as the largest modern and contemporary art museum in the country. Meanwhile, other museums around the Bay are thriving. The de Young and Legion of Honor, the two Fine Arts Museums of San Francisco, draw big annual crowds to their ambitious exhibition programs; the Asian Art Museum has just announced a $25 million expansion by renowned Thai architect Kulapat Yantrasast; and across the Bay, the Berkeley Art Museum and Pacific Film Archive is settling into a slick and more central new home.
SFMOMA will also have a pair of shiny new neighbors to further raise the city’s art profile. Gagosian, one of the premier contemporary galleries in the world, will open a new space next to John Berggruen Gallery, which after 45 years at Grant Avenue is moving to a new home across from the museum. “The Bay area is home to some of the greatest collectors and collections of contemporary art in the world,” says Larry Gagosian, adding that with the opening in San Francisco, “we are excited to participate more fully in this informed and lively art scene.”
Targeting a class of tech entrepreneurs interested in collecting the kind of blue-chip works it offers, Gagosian will parallel Pace, which is about to secure its foothold in Silicon Valley. After developing the Art+Technology program at its Menlo Park location, Pace will soon finish construction on a new location in Palo Alto, where their first show will exhibit works by
James Turrell
. 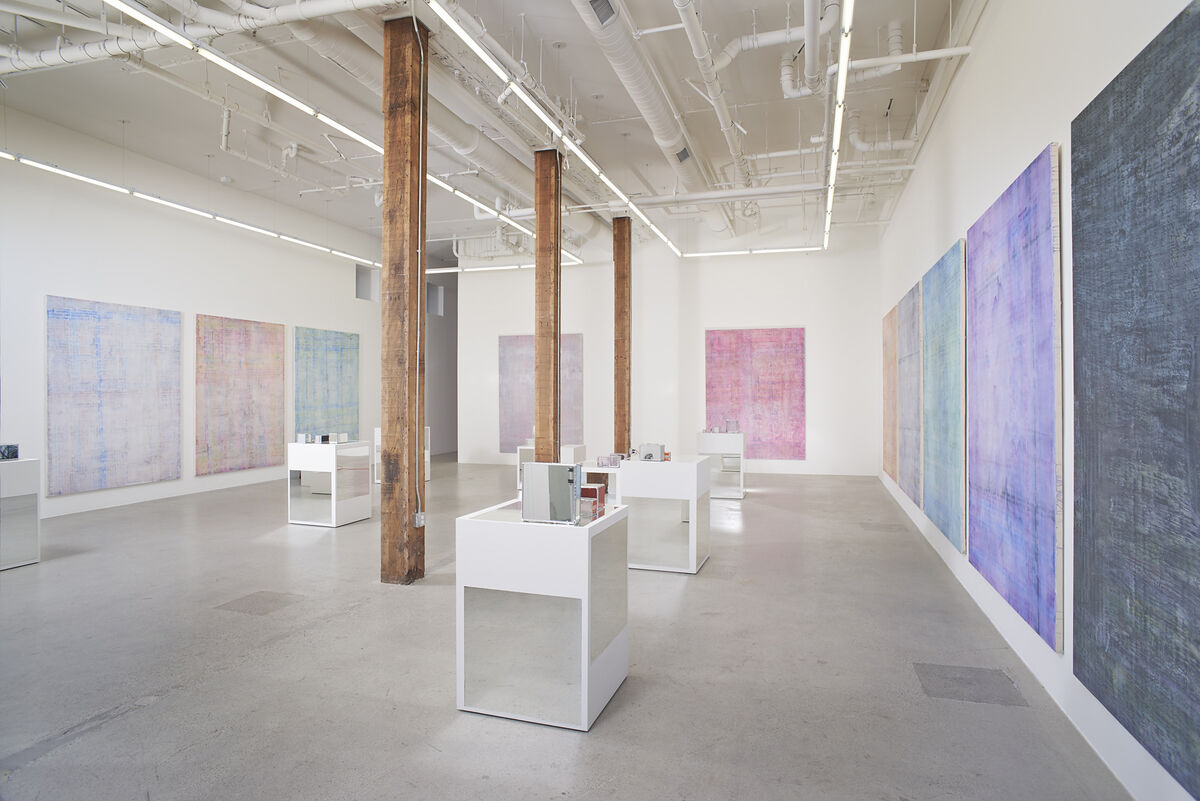 Frish Brandt, president of Fraenkel Gallery, one of the finest photography galleries in the world, senses “the air crackling with new possibilities” when she thinks of these developments. She has felt the atmosphere at their original 49 Geary location change quite a lot since joining the staff in 1985, she says. While remaining dedicated to their roster of coveted photographers—including
Robert Adams
,
Katy Grannan
,
Hiroshi Sugimoto
, and Bay Area-based
Richard Misrach
— Fraenkel has also recognized the need for experimentation amid the region’s shifting culture.
“We have artists like
Richard T. Walker
who we wanted to show and promote, and we needed more walls and a fresh location to do it,” says Brandt, explaining the creation of FraenkelLAB, a project space opening on Market Street. Located on San Francisco’s major thoroughfare, and with an inaugural show curated by filmmaker and provocateur
John Waters
, FraenkelLAB is set to expand both their artist roster and their audience. “It’s a chance for people on the street, who don’t have time to visit or who don’t know about the galleries at 49 Geary, to get excited about new and challenging work,” she says.
Brandt feels a similar excitement for Jessica Silverman and her gallery in the Tenderloin district. For 10 years, Jessica Silverman Gallery has committed to the Bay Area, cultivating long-term relationships with artists and collectors both within the city and from elsewhere. Silverman is delighted those commitments are “finally paying off, now that the entire art world has its eyes on San Francisco,” as she says. “For years, our most loyal collectors and supporters came to San Francisco to see us in the gallery rather than only seeing us at art fairs.”
While the city’s tech firms have changed the way many people encounter culture, Silverman stresses that “face-to-face encounters with art,” like her recent exhibition of colorful, palimpsest-like paintings by
Dashiell Manley
, are irreplaceable. “I love technology,” Silverman says, “but I can honestly say that there is nothing more gratifying than people standing in your space, experiencing the real scale and sensual details of ambitious work.” 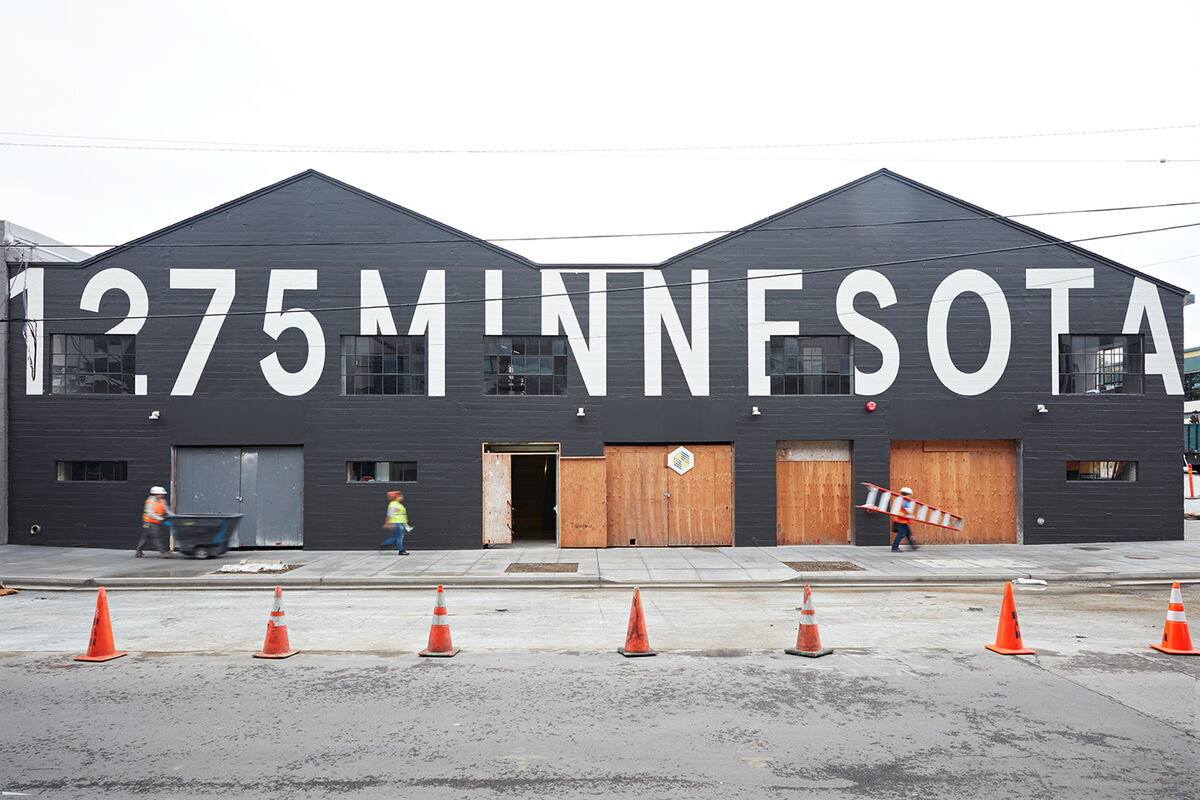 Courtesy of the Minnesota Street Project.

The movement of galleries away from downtown has also helped to cement another, more affordable arts center South of Market: DoReMi, a cultural affiliation uniting the Dogpatch, Potrero Hill, and the Mission neighborhoods. Its freshly cut cornerstone is the Minnesota Street Project, three converted warehouses at the city’s industrial edge that will comprise the non-profit San Francisco Arts Education Project, temporary exhibition spaces, dining from Daniel Patterson Group, and 10 commercial galleries, including vital, younger spaces like Et al and a number displaced from their original locations by rising rents.

With artists also moving into 30 new studios in an adjacent complex, Minnesota Street offers space at half to a third of the cost of downtown counterparts and, crucially, indefinite leases that remove the threat of eviction. Andy and Deborah Rappaport, the philanthropists behind this new cultural center, consider such security essential to the health of the arts. Silicon Valley venture capitalists, the Rappaports are also long-time patrons of the arts who believe that, despite the increasing market importance of art fairs like San Francisco’s fledgling FOG Design+Art, the experience of art in a gallery is essential to appreciating the work and to forming enduring relationships between artists, curators, dealers, and patrons.
Reflecting on the first artwork she and Andy bought—a $50 woodcut of a German art critic at the Provincetown, Massachusetts, art auction—Deborah emphasizes that cities need galleries that can take the time to befriend, educate, and excite young collectors. Given the Bay Area’s current problem with affordable real estate, Rappaport says she realized it was time for them to find a solution—and to find it fast, before people committed to creating art began to leave. “Sometimes things need the nonprofit model; sometimes they need a profit-driven market solution; we needed something in between,” says Rappaport, describing the innovative, break-even plan for Minnesota Street. “We looked everywhere for good models, but in the end we had to come up with a San Francisco solution to a San Francisco problem.”
Careful not to retread tired ground with the term “entrepreneurial spirit,” Rappaport instead channels a new way of doing philanthropy that benefits not just specific artists or organizations, but, she hopes, civic health as a whole. Patricia Maloney echoes the sentiment. Founder of the online art magazine Art Practical, Maloney is now executive director of the nonprofit art space and gallery Southern Exposure (SoEx), a fixture of the Potrero Hill neighborhood since 1974. When we spoke, she recounted a recent experience with a multi-faceted mirrored sauna—part of the recent SoEx installation Steam Work by artist Michael Parker—that provided a case in point. Zach Klein, a SoEx board member and co-founder of the video-sharing site Vimeo, had brought members of his current company DIY (a creative projects site for kids) to the installation. As they entered Parker’s “steam egg,” members of the team, echoing the lingua franca of the tech world, began describing a heightened sense of connectedness, both with others moving through the installation and with the space itself. As Lisa Martin, Communications and Outreach director at SoEx, reiterated, this experiential aspect of art has the potential to connect long-time members of the arts community with newer arrivals to the Bay Area.
As with the open spaces at Minnesota Street, SoEx creates an environment where visitors can see artists at work and watch an installation take shape in real-time. Advocating for this porousness between art and daily life, Maloney wants to enable “experiences that shake people out of the status quo in a way that increases arts patronage, but that can also positively change the values and aspirations of people who are exposed to them.”
To help such experiences take root and grow, the San Francisco government might take a look across the Bay. While the city of Oakland is not without its own challenges, it was through official support that the Oakland Art Murmur, a walk between eight galleries in 2005, became the full-throated, monthly cultural event of 25,000 visitors that today is Oakland First Fridays. The region will need more initiatives like that one, and increased support from the government and tech industry, to ensure the health not only of the larger gallery imports—the Gagosians and the Paces—but also of spaces with deep cultural roots, like the Mission District’s Galería de la Raza.
The Bay Area was a beacon for artists, political revolutionaries, and counter-cultural ideals before it became the epicenter of forces that have changed the way people interact and do business across the world. Despite the clash of cultures that continues to unfold in cities around the Golden Gate, there are many reasons to be optimistic about art’s victorious spirit there.
George Philip LeBourdais
Related Stories