The Brooklyn Museum’s African Mask Show Is a Complex, Powerful Exploration of Identity 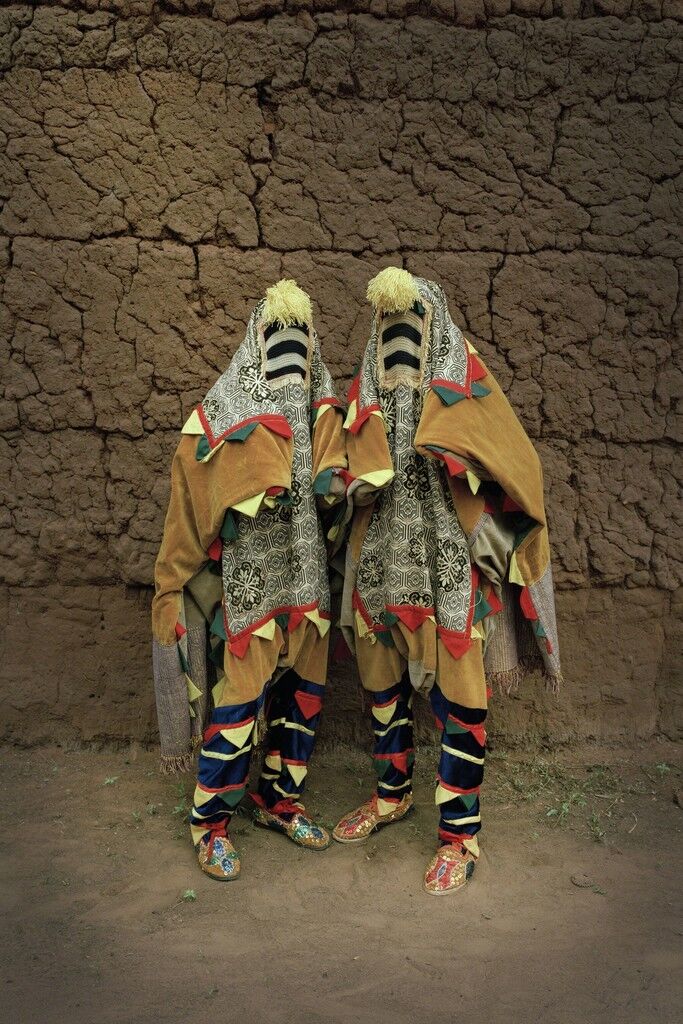 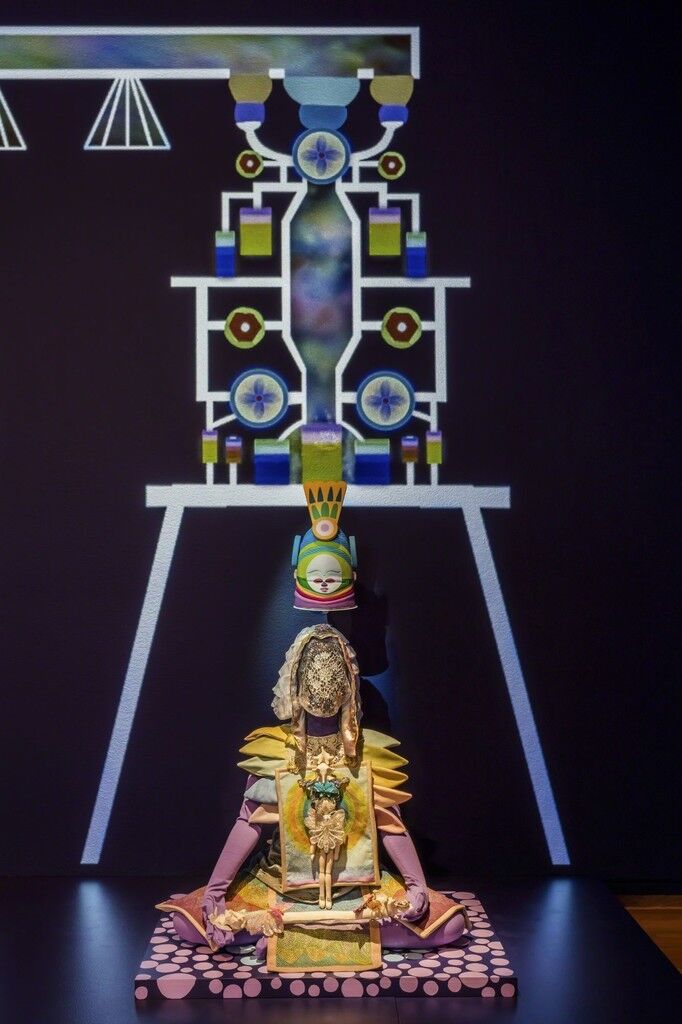 Saya Woolfalk
Installation view of ChimaTEK: Virtual Chimeric Space (detail) , 2015
"Disguise: Masks and Global African Art" at Brooklyn Museum, New York
The first gallery in which the Brooklyn Museum’s new exhibition “Disguise: Masks and Global African Art” unfolds is gray-toned, like an old photograph. Stunning masks from various African cultures, dating from the early 19th to late 20th centuries, stare inanimately at visitors from the walls, atop pedestals, and inside vitrines. An enlarged 1922 commercial photograph of more masks, displayed for potential purchasers like specimens, covers the gallery’s back wall.
But the primary clue that this is not your typical taxonomic march through a museum’s African masks collection lies in the title of this introductory gallery: “Becoming Artifacts.” “This room is the way that we’re used to seeing African art, and it is actually the most unnatural way to experience it,” explains Kevin Dumouchelle, the museum’s associate curator of Arts of Africa and the Pacific Islands, who organized this iteration of the exhibition, which originated at the Seattle Art Museum.
“On one hand, we’re trying to step back and actually make the experience of seeing African art in a museum a little strange,” Dumouchelle says. “These masks, they become sculpture, but they’ve been divorced from costume, divorced from music, divorced from performers.” He is not shy about critiquing the Brooklyn Museum’s own treatment of African masks, through a small display of ephemera from an early-20th-century exhibition the wall text calls “offensive and Eurocentric.”

7 Images
View Slideshow
“Disguise” serves, in part, as a corrective to all of this—and it does so beautifully. One of its goals is to re-animate historical African masks by showing them alongside a rich array of works—sculpture, photography, installation, video, digital media, and sound art—by 25 globe-spanning contemporary artists from Africa or African descent. These artists help show us that African masks are not lifeless objects made only to be looked at, but rather are potent, animate forms with active uses. In turn, the masks show us that the contemporary artists’ works exist on a long continuum of African mask-making and masquerade, which Dumouchelle describes as a “genre that is a platform for artistic creativity and engagement with the issues of its time, and of our time.”
Remixed music of the Igbo people emanates from Nigerian artist
Emeka Ogboh
’s multipart sound installation, Egwutronica (2015), marking the transition from the introductory gallery into the rest of the exhibition (or from the past into the current moment). It infuses the galleries, alerting visitors that they are in a space with living art that addresses manifold, often difficult, issues. Notions of identity, racism, and manifestations of power are among the concerns raised by these works—as well as the metamorphic aspect of masquerade, which transforms the wearer/performer into someone or something else in order to reveal deeper truths about the world around us.
Angolan artist
Edson Chagas
transforms himself with economy and elegance in his “Oikonomos” series of photographs (2011), featuring portraits of himself with various shopping bags covering his head. He wears these bags like masks, obscuring his own identity with their messages of rampant consumption and globalization, including a particularly poignant one on a plastic bag that screams: “OBAMA The First Black USA President!!” In a decidedly maximalist vein, American artist
Saya Woolfalk
harnesses installation, video projections, and sci-fi into a gorgeous, otherworldly presentation that suggests the flux and hybridity of contemporary identities. 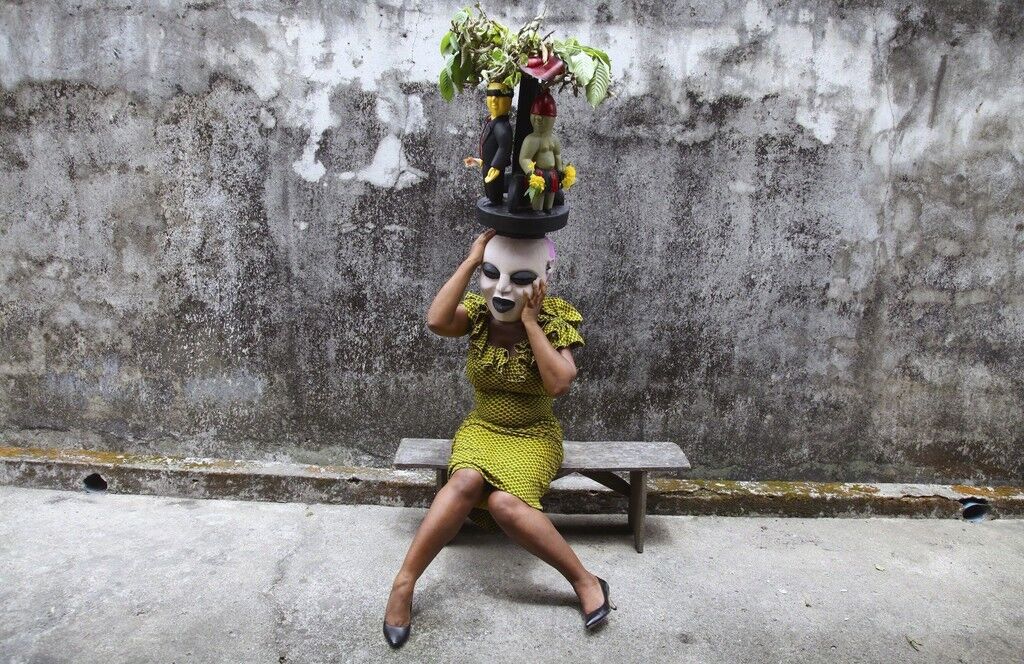 Zina Saro-Wiwa
The Invisible Man, 2015
"Disguise: Masks and Global African Art" at Brooklyn Museum, New York
Advertisement
Further on, in a section devoted to the continual evolution and reinvention of mask-making and masquerade traditions, British-Nigerian-American artist
Zina Saro-Wiwa
presents a moving, personal video, titled The Invisible Man: The Weight of Absence (2015). A portrait of loss, it stems from her own experience of losing important men in her life, including her father, an activist murdered for his work by the Nigerian government. It is centered on herself and her fellow Ogoni women, who are filmed slowly, gracefully performing the exhaustive weight of such absences with expressive faces, gestures, and bodies. Its centerpiece is a powerful, Janus-faced mask, whose two sides represent the pain and the anger that these losses provoke.
Ushering both this mask and this video into being was Saro-Wiwa’s formation of an all-women masquerade group, representing a radical break with the traditions of this male-dominated cultural form. In so doing, she connects with her Ogoni culture while pushing its masquerade practices into new territory—and, as Dumouchelle hopes, closer to all of us. Outlining another of the exhibition’s goals, he explains: “It’s about having artists of African descent really reclaim the narrative [of Africa and its cultures] and using this tradition to talk to us today about contemporary issues: about racism, homophobia, corruption, inequality. All of these issues are addressed through this universal language of masquerade.”
Karen Kedmey
“Disguise: Masks and Global African Art” is on view at the Brooklyn Museum, Brooklyn, Apr. 29–Sept. 18, 2016.
Related Stories

The Case against the Universal Museum 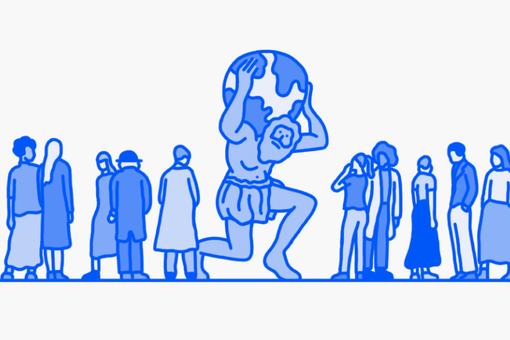 The Case against the Universal Museum
Isaac Kaplan
Apr 26, 2016