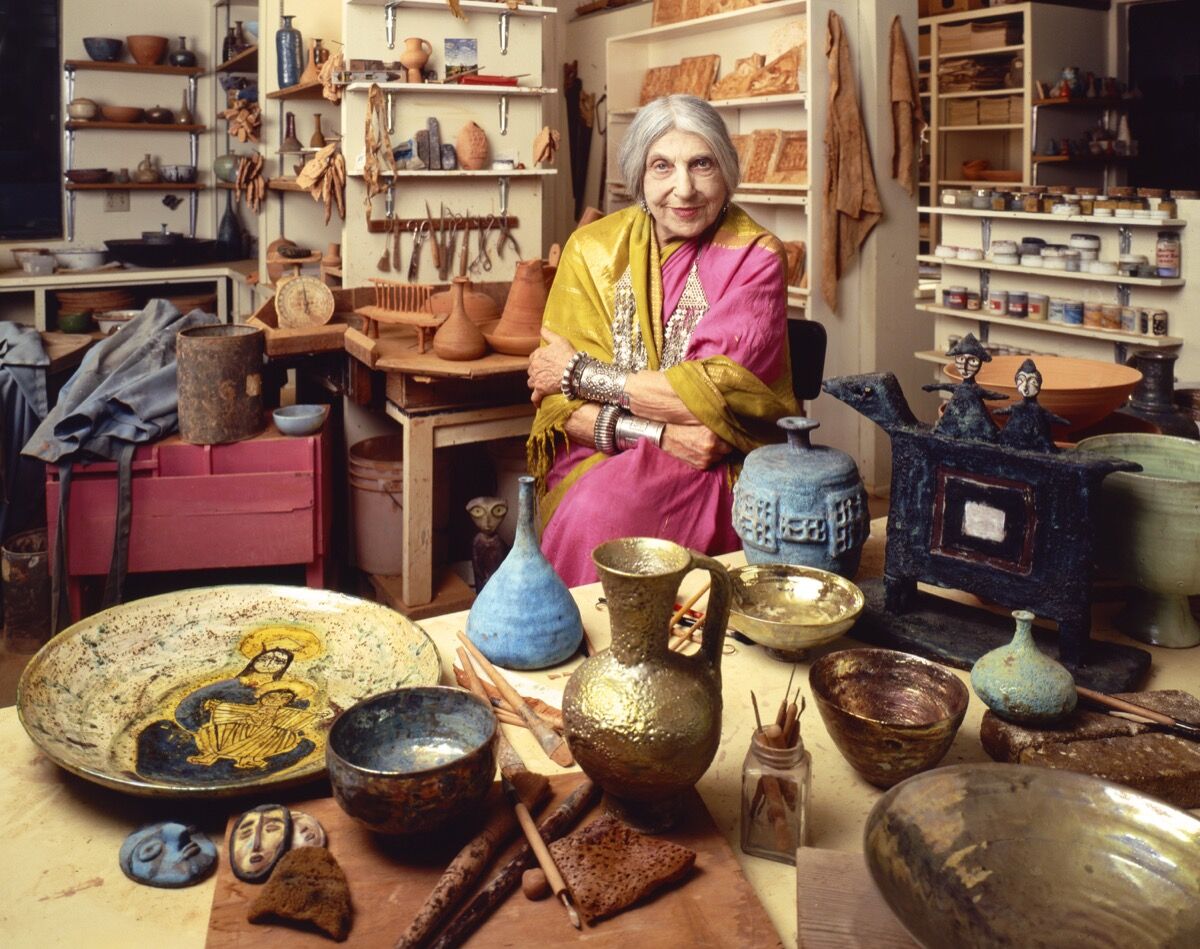 Portrait of Beatrice Wood in her Ojai studio, 1983, from the Jim McHugh Artist Archives.

“I owe it all to art books, chocolates, and young men,”
Beatrice Wood
would often tell those who made the cacti-stippled pilgrimage to her Ojai, California studio before the artist passed away in 1998. There they’d find the fabled artist, in the last years of her life, swathed in a sari while working the potter’s wheel, and flanked by all manner of sacred objects: healing crystals, Hindu icons, and her signature opalescent vessels. There were young male assistants on the clock and stacks of Hershey’s bars in the refrigerator.
For Wood, who lived to the age of 105 and made work up until her penultimate year, “art books, chocolates, and young men” became the trifecta to which she attributed her longevity, and an abbreviation for the rich ingredients that made up her life. But the tagline, as her devout fanbase will tell you, doesn’t do Wood—or her work—justice.
Wood was a member of the New York Dada group and a pioneering sculptor. As a woman artist primarily working in ceramics, she also represented a demographic and a medium that were both marginalized during her lifetime. “More people know her for sleeping with
Duchamp
than for making her own work,” the artist
Arlene Shechet
told me when we discussed Wood’s legacy. “That needs to be rectified.”

Wood was indeed a lover of Duchamp, who she met in New York in 1916. They were part of a legendary menage-a-trois with Henri-Pierre Roché that would go on to inspire Francois Truffaut’s French New Wave film, Jules et Jim (1962). More significantly, though, they had a lifelong creative dialogue that, in its first year, helped shape Dada.
Though a 1993 documentary later dubbed Wood the “Mama of Dada,” she is rarely listed among the movement’s pioneers. But in 1917, both she and Duchamp submitted works to the Society of Independent Artists’ first exhibition, which would double as Dada’s coming out. While Duchamp’s contribution to the show—a found urinal turned on its head and titled Fountain (1917)—would later be seen as a watershed moment in the history of modern art, it was Wood’s Un peut (peu) d'eau dans du savon (1917) that caused public uproar at the time.

“She was sort of the sensation of the show,” explains Francis Naumann, a Dada scholar, dealer, and dear friend of Wood’s. “Her work was attacked by the press.” The offending painting showed a woman’s naked torso with a real piece of soap affixed “at a very tactical position,” Wood would later explain. She and Duchamp also founded the seminal Dada journal, The Blind Man, with Roché. In one issue, Wood penned an article defending Duchamp’s Fountain. “The only works of art America has given are her plumbing and her bridges,” she mused. The quote is often erroneously attributed to Duchamp himself.
While Duchamp no doubt served as a mentor to Wood, her rebellious creativity didn’t start—or end —with him. “Beatrice was a romantic, but she never allowed a man to control her life—ever,” explains Naumann. “She paid her own bills from the very beginning to the end.”

Wood was born into a wealthy San Francisco family in 1893, but in her 20s she renounced their fortune, setting into motion a life of autonomy that was rare for women of her generation. She also distanced herself from Duchamp’s orbit. After her irreverent debut in the New York art scene, Wood relocated to Montreal then California, where she began making the shimmering ceramic vessels and satirical figurative sculptures that she’s become known for—at least in some circles.
“She could have been doing a lot of other things that would have gotten her recognition earlier, but ceramics was then, and really still is, a marginalized material, language, and form,” explains Shechet. Wood started using clay, somewhat haphazardly, at the age of 40. Spurred by a desire to create a teapot to match a set of plates she owned, she enlisted in a pottery course at Hollywood High School, then went on to apprentice with ceramicists Gertrud and Otto Natzler. Wood was soon applying her signature panache to the medium, forging vessels and chalices jeweled with hand-hewn details (little blobs of clay arranged into intricate, uneven patterns; naked figures pared down to silhouettes) and coated in glazes that give the effect of churning crystal balls. 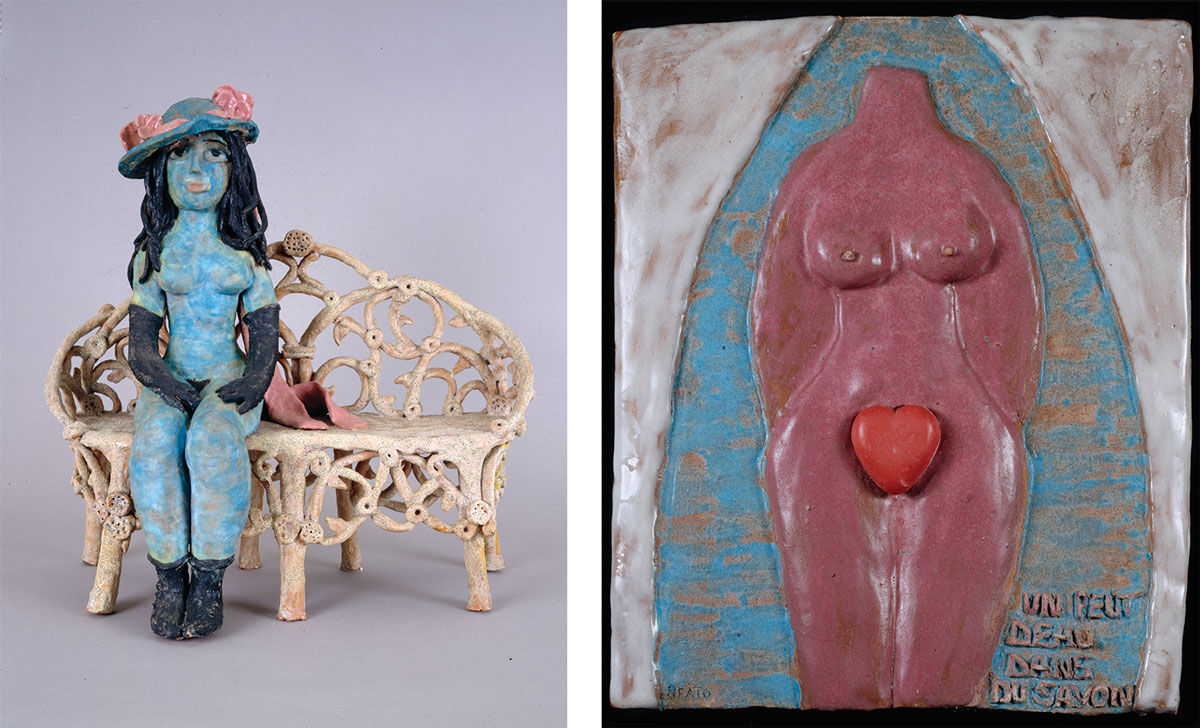 Advertisement
“I just loved how it was very basic and very exotic at the same time; that each piece seemed to be hard-won,” Shechet recalls of her initial attraction to Wood’s work. “She was also taking a somewhat Persian aesthetic and glaze technology at a time when the information that American potters were pulling from, if it was from the East at all, was from Japan. She was just on her own path.”

It was a path that led Wood to Ojai, a hippie town east of Santa Barbara nestled against the Topatopa mountain range where Krishnamurti, a leader of Theosophy (a mystical philosophy that Wood ascribed to) also lived. There she began a new body of work: knobbly figures that drew from the Dada spirit, the folk art that she collected voraciously, and her experience as a woman. “Now, in pottery I make figures,” she once said. “And a lot of people think they’re perfectly horrible. Maybe they are. I’ve no idea. But I purposely keep these figures unschooled.”
In one work, Career Woman (1990), three nude ladies, smiling ear-to-ear, stand atop the comatose body of a man wearing a suit. In another, Men and their Wives (1996), couples gather around a table—but the symmetry is off. Four traditional duos bookend a threesome: a woman (said to be Beatrice herself) flanked by not one, but two men. The sculptures are both hilarious and incisive. Today, they also read as ardently feminist—mini manifestations of the independent life Wood led.
But Wood was a complicated and contradictory figure, and she would never describe her work as feminist. “She was a feminist on almost every level,” explains Naumann. “But she would never admit to that because of her connection to the romantic period. Part of her held onto the 19th-century ideal of a relationship—a husband, a white picket fence, all of that. But that never happened for her.” One day, Wood went so far as to tell the Hollywood actress Bette Midler, who had made her own pilgrimage to Wood’s studio, that women should sit at the feet of their men. “Apparently Bette Midler hit the ceiling, started screaming, and flew out of there—to Beatrice’s delight,” recalls Naumann. “She loved to provoke.” 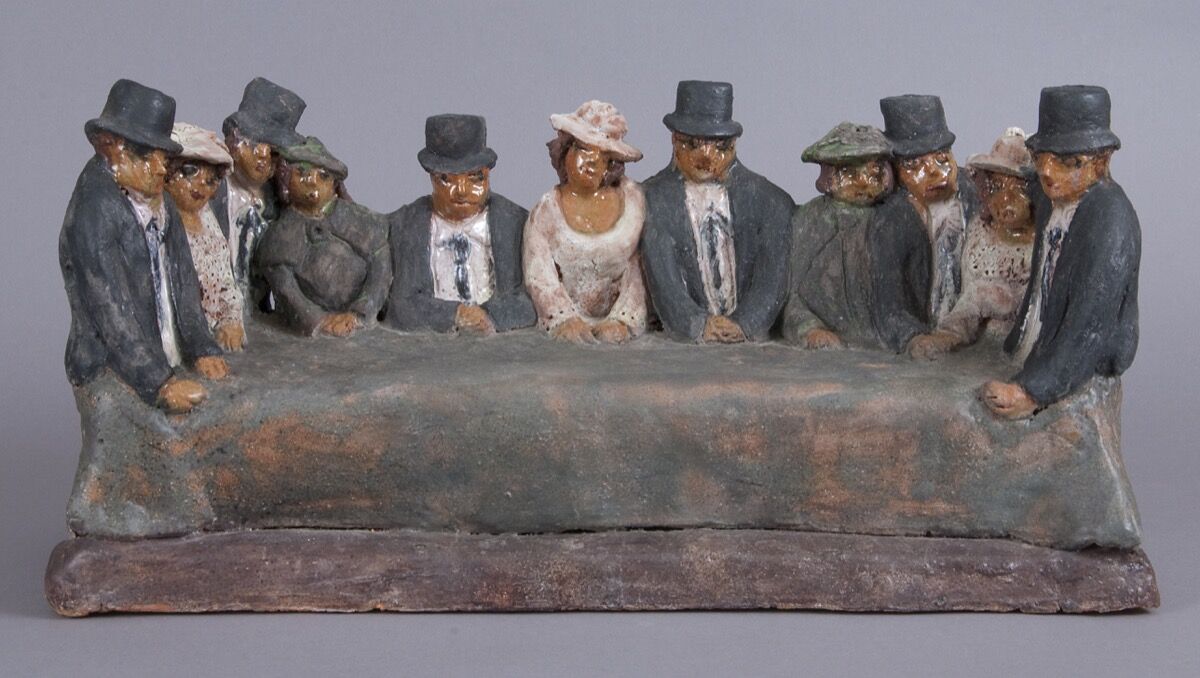 A taste for provocation was a character trait that Wood owned up to. In 1985, she wrote an absorbing autobiography called I Shock Myself, which tracks the many turns of her life, propelled by an inexhaustible joie de vivre. “She wanted to publish her diaries, too, and give them the title Diary of a Red Hot Mama,” says Naumann, laughing. “She thought that would really draw attention.”

In the last 20 years of her life, between the late 1970s and her death in 1998, Wood’s work did receive attention, thanks to support from several influential dealers—namely Naumann, who was based in New York, and Garth Clark, in L.A. Her prices rose, and for the first time since relinquishing her family’s fortune, she was making a healthy income. “In her diary, up through her 70s, she worries about infrequent sales, even having enough money for groceries,” explains Kevin Wallace, the Director of Beatrice Wood Center for the Arts, a small museum run lovingly out of Wood’s former Ojai home and studio. “But, by the time she passed away, her estate had about $3 million in it.” It was during this period of prosperity that Midler paid her visit, and that Jasper Johns bought one of Wood’s works.
But the momentum wouldn’t survive the artist’s death. After her passing, the prices of her work plummeted. “The success was great for Beatrice, but it also encouraged speculation,” explains Naumann. “Amateur speculators realized that she would soon die, so they just kept buying her work. Then of course, they flooded the market as soon as she died, and the prices went down staggeringly. In fact, I bought one of her chalices at auction for less than $10,000—the same type that were sold for over $100,000 during her lifetime.”
The Beatrice Wood Center for the Arts, which Wood envisioned as a museum and residency based in her home, was also starved of funds. Wood left her $3 million to the struggling Besant Hill School, a progressive high school next door to her studio. The Center’s “Hail Mary” was meant to be a cache of Wood’s works that would be sold strategically to support the museum. But because of the artist’s unstable posthumous market, by 2005—the year Wallace came on board to manage the museum—the profits were all but spent and the works gone, save for 20 pieces kept as part of its permanent collection. 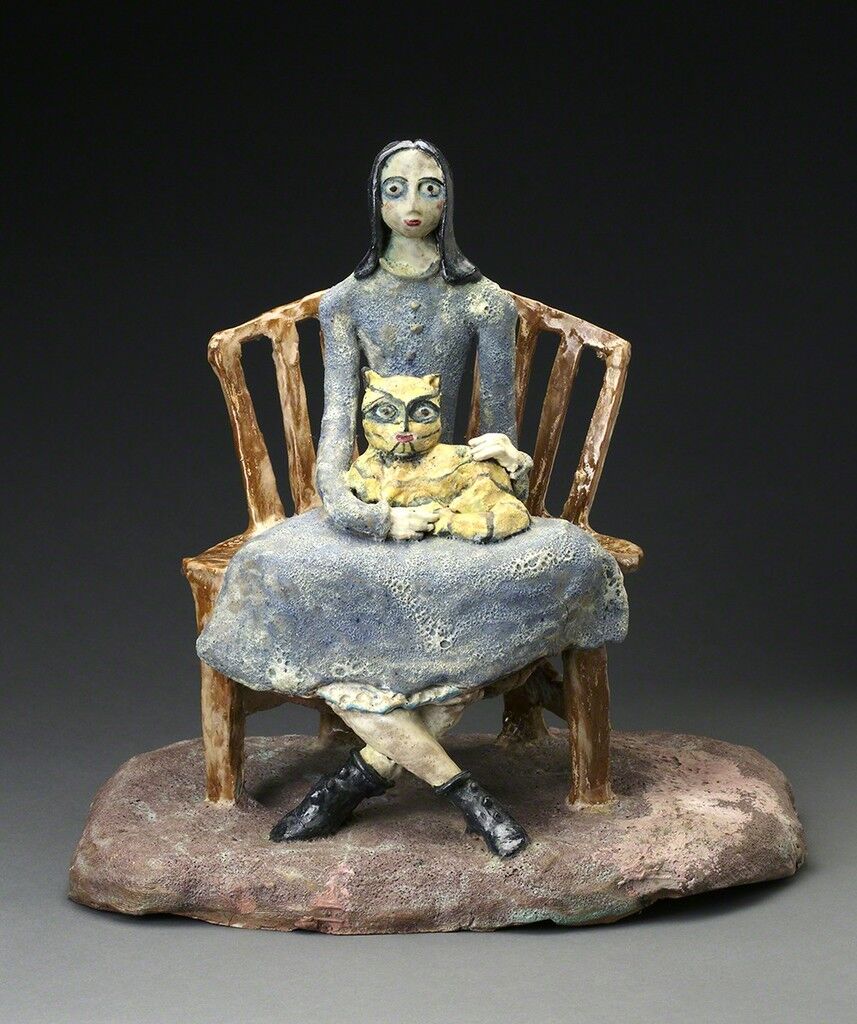 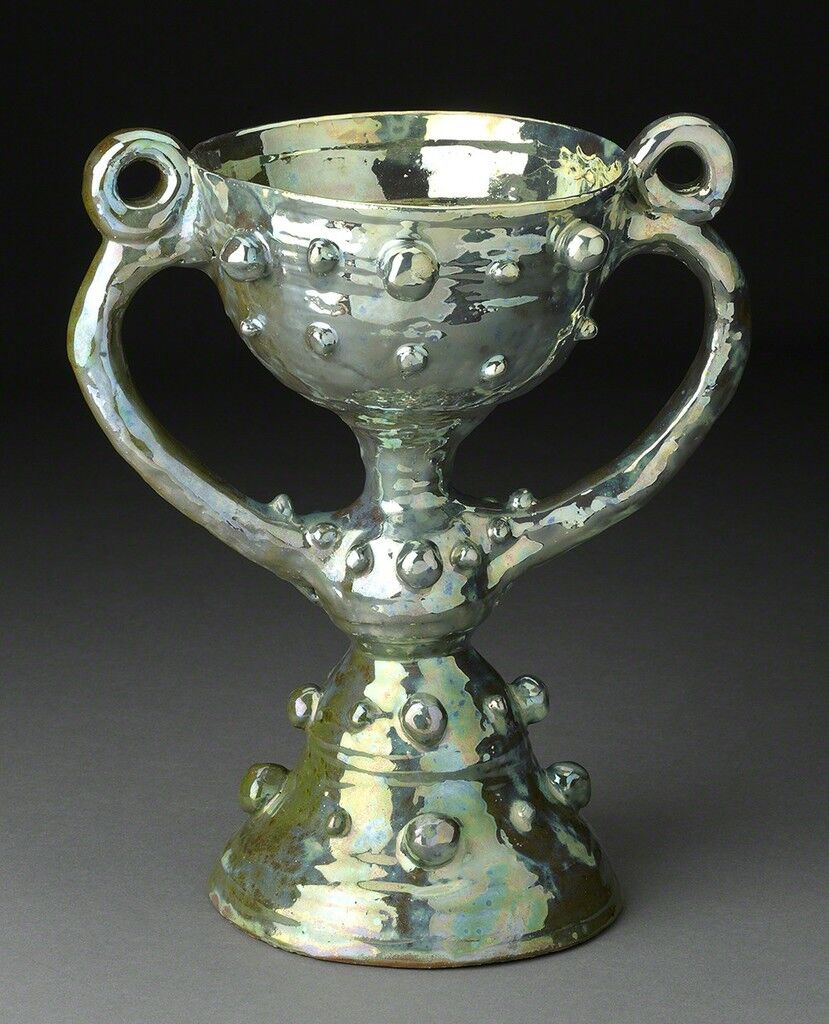 Beatrice Wood
Blue Chalice, 1985
Ferrin Contemporary
Today, Wallace and his wife, Cheryl, live in several rooms adjacent to Wood’s former home and studio. Their bedroom is a few steps from a library that houses Wood’s incredible collection of art books, and their kitchen table is covered in vessels made by the current artist-in-residence. The two greet visitors excitedly, brimming with fascinating anecdotes about Wood’s life. While only a handful of Wood’s works are on view—a elaborate chalice, a funny duo of figurative forms called Mr. and Mrs. Teapot (1980)—the artist’s lust for life and art are palpable throughout the space, especially in her former studio, which is still stacked with the minerals she used to concoct glazes (labeled “borax,” “green jewel,” “bone ash”).
“There’s a very strong sense of her presence here,” says Wallace, “and although I of course don’t have the answers about what happens to us after we die, I think that somehow her spirit merged with the place.” Perched on a shelf above jars of minerals that once housed sliced pimentos, there is a shrine to Wood; an image of her smiling face—framed by plaits of gray hair, elaborate earrings, the top of a pink sari—is draped with a lei of orange flowers.
It isn’t easy to see Wood’s work in person these days. The trip to Ojai is a long one for most, and the museums that do own her work rarely show it. But Wood’s passionate tribe of supporters, like the Wallaces, Naumann, Shechet, and many more, are committed to resurrecting her legacy—as a Dadaist, a pioneering sculptor, and an irreverent feminist of her own design. 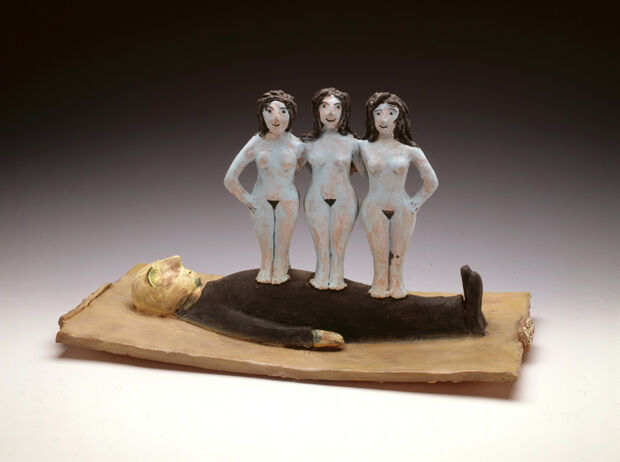 Naumann, for his part, is growing a collection of Wood’s work, part of which he exhibited in a group show at his New York gallery last year. His cache includes chalices, figures, and one very unusual piece. After Wood died, in her bed overlooking Ojai’s Happy Valley, half of her ashes were scattered across her beloved Topatopa mountain. The other half was mixed into a luster glaze that coats three vessels by the artist Nancy Martinez—Naumann owns one.
“If you touch the surface, you can feel these little bumps, which are actually her bones,” he explains, affectionately. “It might be a little creepy, but it’s something that she allowed to happen.” Perhaps the gesture was another example of Wood as provocateur. Or maybe it was an act of self-preservation—a reminder that her legacy is more than a provocative one-liner, that it is inextricably linked with the groundbreaking work she made and the staunchly independent life she led.
—Alexxa Gotthardt

A previous version of this article included a claim from Kevin Wallace that the sales of Wood's works left in her estate after her death were mismanaged by a consultant. Since these claims are contested, they have been removed from the article.
Related Stories