What Is the Future of Art?

Artsy Editors
Mar 1, 2016 11:22am
The Canadian artist and cultural theorist Douglas Coupland, who invented the term for an entire generation with his 1991 novel, Generation X: Tales for an Accelerated Culture, reflects on the changing cultural landscape—who better?
In 2014, at Art Dubai just outside the Third Line booth, I heard one visitor say to another, “You know, I think I’m really starting to burn out on conflict art,” and I thought to myself, Boy, you haven’t seen anything yet. And so it is with culture’s near future.
The battle of what it means to be an individual human being has never been so heightened: the ever-escalating clash between modernity and eternity; jihad versus McWorld; heaven versus nothingness; science versus religion; feeling versus thinking, or whatever you want to label it.
The actions of ISIS and schizophrenic American evangelical right-wing politics are manifestations of the same situation: eternalistic thinking within a bunker that’s being hammered on by ever-more powerful logarithmic and algorithmic technologies, by stunning biotech discoveries, and by a fully standardized and shipping-containerized global economy. Adding a wow-factor to this clash is the nearly overnight eclipse of the Enlightened individual by roughly three billion atomized data-generating online users (at the moment) and what they signal: a rapidly approaching era of personhood minus sentience.

Advertisement
So we’re all in this together, sharing these new dynamics—and we share that slight vertigo that accompanies our realization that it’s only going to intensify. In fact, it’s never going to go away. How will future artists respond—by making crapstraction? By living in Berlin for six months? By growing corn at bus stops? By forming bureaucratized cult-like micro-communities in their local part of town? By pretending to be more political than they really are?
Responses to these new modes of self-definition can only generate new kinds of art. Hopefully that new art will arrive from left field when you first experience it, like learning that your dad has a secret family 50 miles away, or that your mother’s a weapons dealer, or that dream where you’re in a class for a test you didn’t study for or even remember existed. But maybe another way of looking at the future of art is to ask yourself what was art in the future supposed to have been like? Your brain instantly goes to high tech—everyone’s does. Massive glowing-domed mega Chelseas stretch for a thousand miles, their dazzling casino lighting systems fueled by artists’ bodily waste and composted food scraps, while little floating unmanned hoverboards pop by every so often dispensing capsules filled with a nutrient-rich gel which, when swallowed, makes one’s brain feel like it’s getting parental approval.
Technology seems to be the one thing that pushes everyone’s button. Orthodox religions hate it. Secular capitalist cultures thrive on it—depend on it, actually. The art world looks at it with reverence, disdain, fear, and a need to codify it as quickly as possible before it codifies them—or at least to make it appear that teachers aren’t even more technologically clueless than they already seem to their students. (“Sarah, before you hand in your thoughts on my theories on time absence and accelerationism, could you quickly show me how to create a new layer in Photoshop?”)
Questions arise: Can we make technology a tool of the left again? Is it defeatist to sit back and just wait for yet one more power-inverting thingamajig out of Palo Alto? Who would you rather have had invent search engines: the U.S. government or Google? Be honest. It’s not like search engines were going to come out of North Korea.
Advertisement

Back to art: the next big tech tsunami waiting to inundate the art world is 3D printing. Wait. I know. You see the words “3D printing” and you think of some place at the mall where they make wedding cake toppers, and where 17-year-olds print out dodecahedrons and sex toys (they do; you’d be surprised). But in two years most smartphones on earth will have rudimentary, if not really good 3D scanners built in. Printer prices are collapsing. They’re essentially glue guns mounted onto a moving X/Y axis.
What are people going to do with all of this? What will ISIS do with it? What will Hollywood do with it? What will Monsanto do with it? And how will all isotopes of the left—or right—bend 3D printing to their will? We all know about 3D-printed guns, but there’s probably something far scarier than guns lurking in the weeds of the near future—and equally something of greater beauty. 3D printing is a whole new continent in need of exploration, but remember that sometimes what seems incredibly obvious still takes time. It took smartphones over a decade for selfies to become a thing. They only seemed obvious the moment they were identified.
Here on Earth, the best place to hunt for rare minerals are the spots where large collisions took place back when the planet was molten and boulders the size of plutoids careened all over the place. Six billion years later we inhabit a universe of social plutoids engaged in a cosmic ontological food fight. Who’s going to hit who with what? And what will that generate?
Evangelical Christians look to the book of Revelations for clues as to what’s to come next; the secular world looks to contemporary art, which seems to operate in a world that has calcified into a self-propagating MFA‑ocracy as orthodox as any extremist religion. But when did making art and foretelling the future become the same thing? What’s the rush? The rush is already coming at us quickly enough. The future of art has to be something that will give us bit of slow. And I hope that it happens quickly. Portrait of Douglas Coupland in his Vancouver studio by Jennilee Marigomen, with photo assistance by Walter Manning, for Artsy.

—Douglas Coupland
Portraits of Douglas Coupland in his Vancouver studio by Jennilee Marigomen, with photo assistance by Walter Manning, for Artsy.
Visit Doug Coupland’s on-site installation in collaboration with Artsy at The Armory Show from March 3rd–6th. He will also participate in the fair’s Open Forum talks series in “What’s Next?,” Artsy’s panel of short talks about the future, on Friday, March 4th, from 5:30pm–7:30pm in the Pier 94 Media Lounge.
Further reading in Art 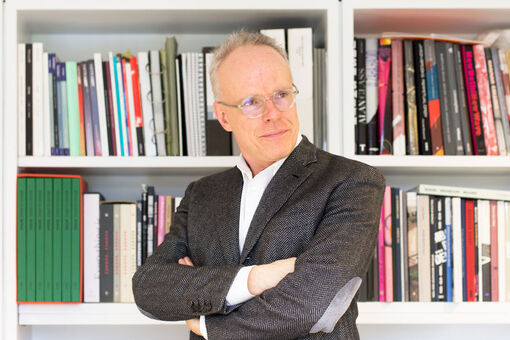