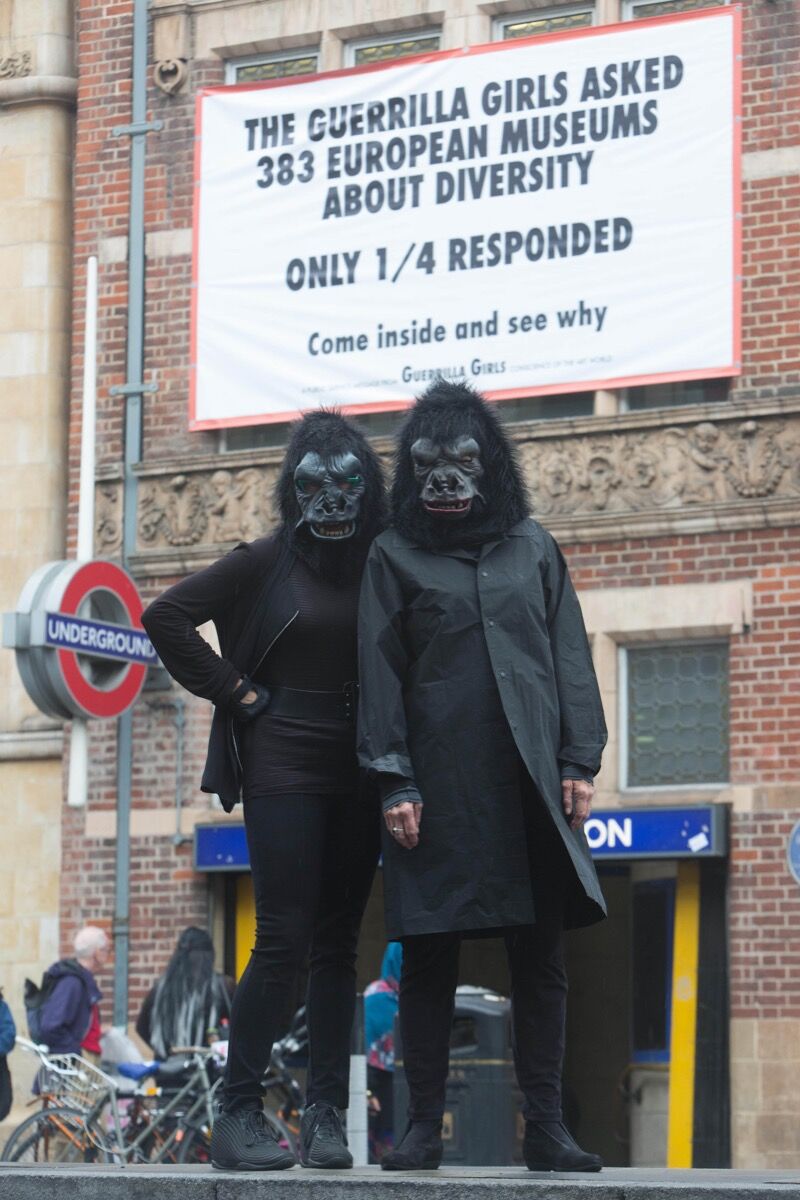 The
Guerrilla Girls
have just released the results of their latest investigation into diversity in the art world—and they’re grim. The results, which appear below, will be on view at the Whitechapel Gallery in London from October 1st. It will be the Guerrilla Girls’ first dedicated exhibition in the U.K.
Revisiting their iconic 1986 poster It’s Even Worse in Europe, the artists sent out a questionnaire on diversity to over 400 European museums. Only a quarter responded. “Those transparent enough to respond will be on the wall, and then we have a list of 300 who never responded, who will be on the floor,” laughed Guerrilla Girls member Frida Kahlo, speaking via Skype from New York a few weeks ago. I’m reminded that maintaining a sense of humor in the face of adversity has been vital to the feminist collective’s project since they launched in 1985.
So is it even worse in Europe? Has anything changed in the 30 years since the group started calling out the art world? “I don’t want to be a spoiler for the show—but the statistics don’t look so great,” Kahlo concedes.
She’s right. Their results show that only 14 of the museums that sent a response have more than 20 artists from outside Europe or the U.S. in their collections. A pitiful total of two museums have more than 40 percent women artists in their collections. Meanwhile, nine museums, including the Guggenheim Bilbao, do not represent any gender non-conforming artists in their programs. Spain is particularly poor when it comes to supporting women artists, with seven Spanish institutions of 21 admitting to less than 20 percent women artists in their collection.
Clearly, their work is far from done. 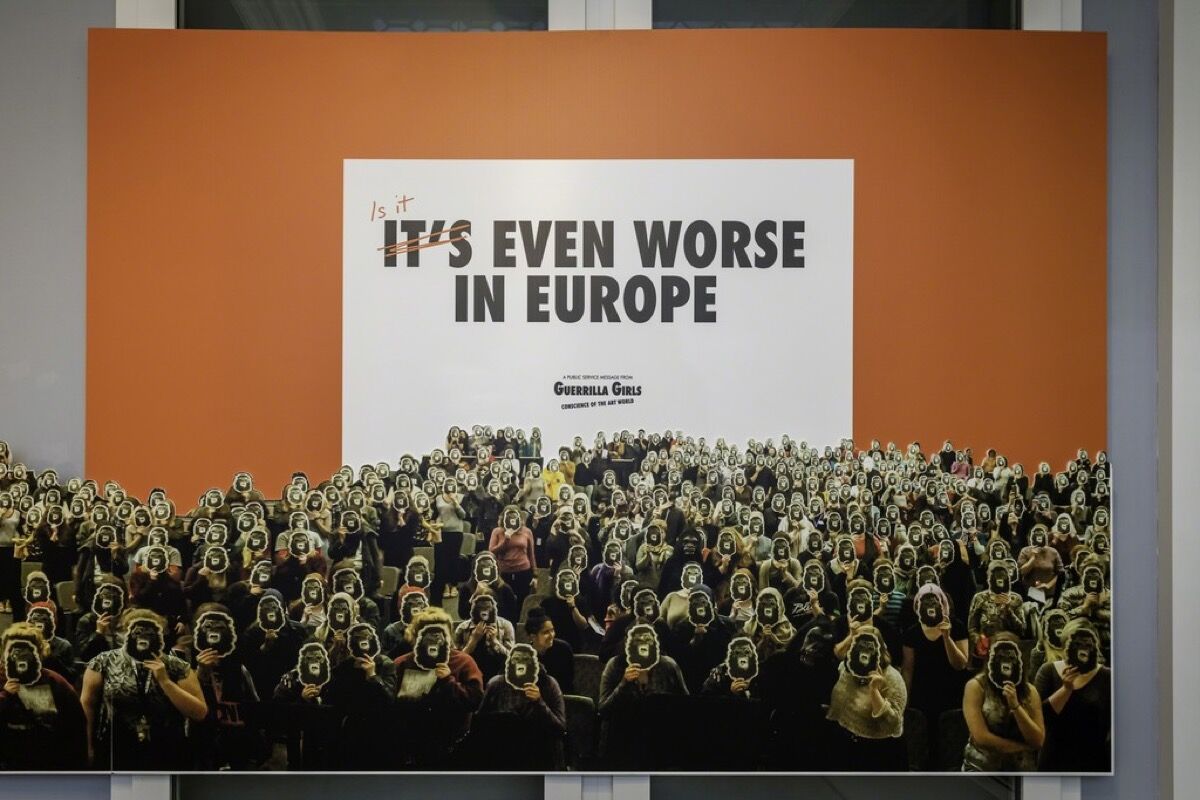 Installation view of “Guerilla Girls: Is it even worse in Europe?” at Whitechapel Gallery. Image courtesy of the gallery.

Guerrilla Girls have always called out names and made damning facts available to the public. One imagines they might be afraid of alienating the entire art establishment and having nowhere left to exhibit. But in these latest statistics, they also investigate Whitechapel’s position on diversity, revealing that between 2011 and 2015, only 13 percent of the solo exhibitions that took place at the gallery were by artists from outside Europe and the U.S.
“We are provocative, but we want to transform, not just to criticize,” Kahlo says. “So we always embarrass institutions and it’s been helpful: There are a lot of issues now that we are at least aware of. When we started, museums used to tell us that they don’t show women artists or artists of color because they don’t rise to standards. They’d never get away with saying that now.”
So who is doing well? The Witte de With Center for Contemporary Art in the Netherlands has the highest number of gender non-conforming artists in their exhibition program (78), while Poland trumped other countries with their relatively strong representation of women artists in their museum collections. Incredibly, all but one of the Polish museums that responded also have female directors. As their poster remarks, perhaps it’s even better in Poland.
The mission has been not only to hold museums, curators, collectors, and artists accountable for discrimination in the art world, but also to empower and encourage dialogue through their activism. The questionnaire gave museums the chance to voice their own concerns—funding being the thing that’s keeping most museum directors awake at night—and even to send complaints back about the questionnaire itself.
While some European museums appear to point a finger at the influence of U.S. museums, their fears about funding align with the Guerrilla Girls’ persistent concerns over the art world’s triangular economy. “Artists are being reduced to a capitalist instrument, rather than a product of culture,” Kahlo explains. “That is very dangerous, when oligarchs are telling us our art history.” 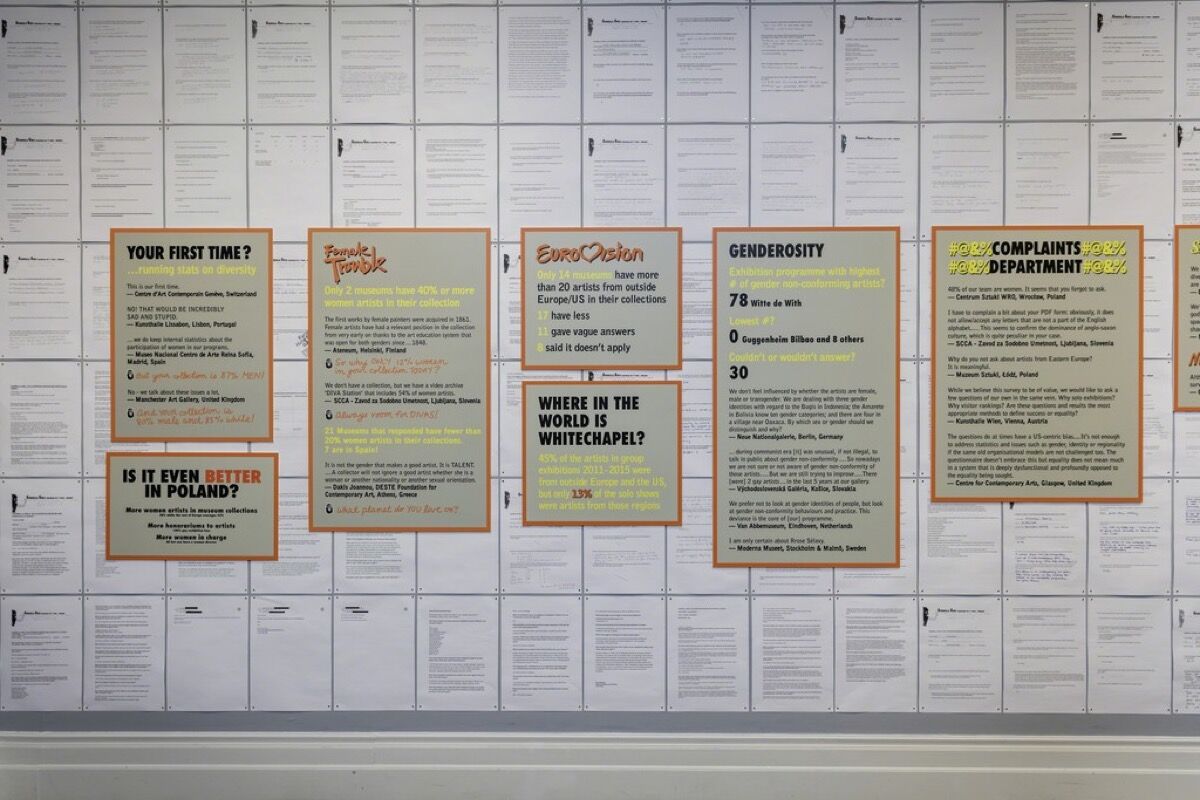 Installation view of “Guerilla Girls: Is it even worse in Europe?” at Whitechapel Gallery. Image courtesy of the gallery.

Advertisement
One way to overcome these conditions—as the Guerrilla Girls have proved through their practice—is to circumvent the conventional economic paradigm. They don’t work with dealers or commercial galleries. “Art collectors don’t buy our work,” Kahlo says. “We make posters and sell them for $20.” One gallerist in New York approached the Guerrilla Girls years ago. The artists requested to investigate the gallery’s artwork pricing, with a view to creating an exhibition based on it. “We never heard from her again after that,” Kahlo remarks.
Coinciding with the exhibition at the Whitechapel, the Guerrilla Girls will lead a week-long public project at Tate Modern, from October 4th to 9th, during Frieze Week in London. The artists are setting up a complaints desk where visitors can go to moan about art and culture at large—during the busiest week in the U.K.’s commercial art calendar. “That’s going to be fun,” Kahlo says, gleefully. It’s clear that despite the often-depressing shape of things, the Girls still find immense satisfaction in galvanizing dissenters into action.
Earlier this year, Guerrilla Girls ran a takeover of 20 art centers in Minneapolis and St. Paul, Minnesota’s “Twin Cities,” focusing on diversity issues in the arts. It happened, Kahlo explains, because the big museums in the region are run by women. While there has been some notable progress in the art world since 1985, both in Europe and the U.S., there’s still plenty of fighting to do—and much at stake.
“When we started 30 years ago, we were just pissed off,” Kahlo says. “We did some things, and a few people listened, but we didn’t have a long-range plan.” Now, their message for the next generation comes through loud and clear. “There are many other ways to be creative in the world,” she says. “You can create new networks, you can make the art world you want to live in.”
Charlotte Jansen
Related Stories