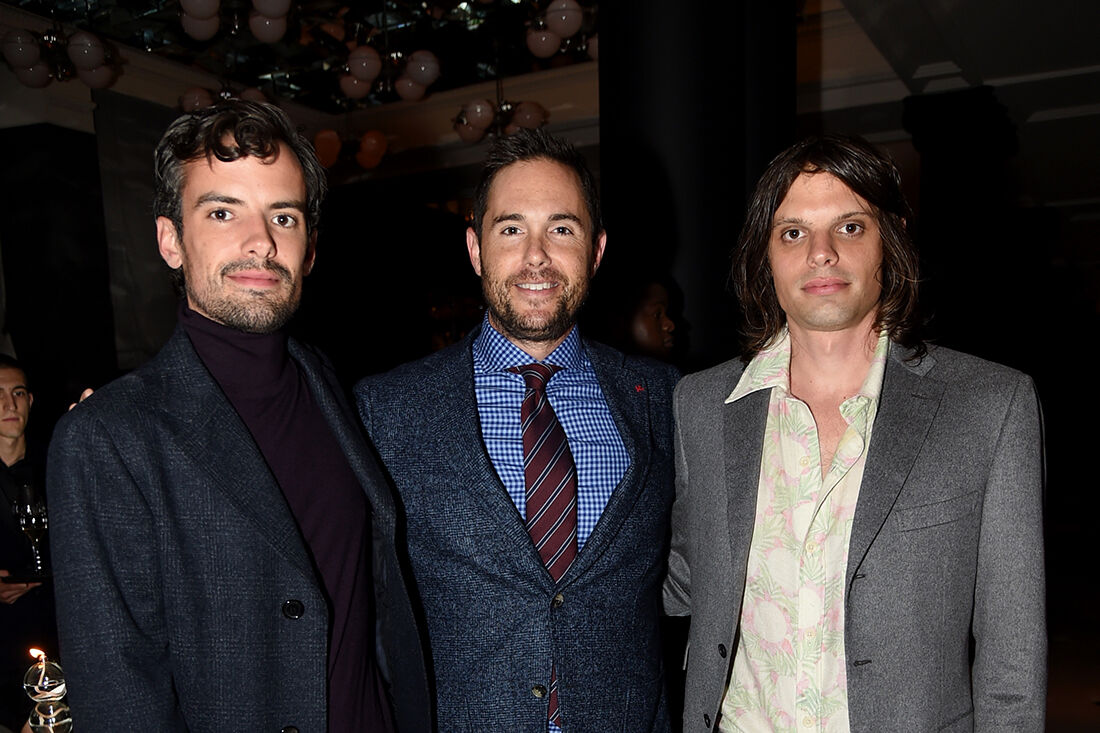 “I feel like this is the stepping stone that starts a journey. If we do it right, it could change the world,” says Nikolai (Niki) Haas on the phone from Houston, a week ahead of the art world’s annual migration to London for Frieze Week. With his twin brother Simon, Niki makes up one half of the
Haas Brothers
, a duo known for crossing the boundaries between art and design with sculptures that are playful, humorous, and often explicit. During Frieze Week, the brothers are showing an installation of two such sculptures, Fatty and Skinny (2015), imposing six-foot-tall bronzes of a cartoonish bear and a snake, respectively, set on three-foot pedestals. But rather than in Regent’s Park, the shiny duo can be found in the courtyard of the Rosewood London, a grand hotel near Covent Garden.

The project is one of the latest efforts by Joshua Roth’s Fine Arts division of talent agency UTA and was produced in collaboration with Haas Brothers’s representing gallery, New York’s R & Company. Roth’s fine art-focused efforts with UTA—he previously supported a documentary on
Maurizio Cattelan
and brought a collaboration between Kanye West and
Steve McQueen
to LACMA—have caused no small stir in the art world, where complete dealer control over artist careers is the norm.

The Haas Brothers, ‘Fatty’ and ‘Skinny,’ 2015. Photos by @michaelbonsor via Instagram.

But for the Haas Brothers, shifting between disciplines and contexts is more rule than exception. “In general, our work is about seamlessly gliding between art forms and exhibition venues,” explains Simon. “This initiative is exactly in sync with that ethos. We’re really excited to have a presence in London but also excited that it’s in a way that defines us—not in such a normal way.”

Niki agrees: “Maybe what we’re doing is unconventional or will be labeled as rebellious. But all that we’re thinking is: What should we do next? What is going to help us support our community? What’s going to make us feel like we’re growing something that could become legendary in its own right or doing something that’s good for humanity across the world? We’re not thinking about some sort of pigeonholed career.”

The Brothers haven’t shrugged off gallery support. Far from it. “It’s all just a tool,” to achieve larger goals, explains Simon. They’ve worked closely with R & Company on this and other projects. Gallery co-founders Zesty Meyers and Evan Snyderman have given them a long leash: “They were like, ‘Go make whatever you want to make. Let’s do something cool together.’ Money never entered the conversation, not even a little. Same thing with Josh,” says Niki.

“Simon and I always talk about our career as something like a Trojan horse.”

With both partnerships, the Haas Brothers are “focusing on displaying positivity,” as Niki says. “That’s the message with these two pieces. They’re just these big, bronze jokes that are the opening to a much larger conversation.” It’s an artistic strategy that’s become a signature for the duo. “Simon and I always talk about our career as something like a Trojan horse. We’re putting something in front of an audience where, inside of the pieces, there might be a message that they never quite thought would be there,” Niki continues.

At face value, it’s easy to see why that could be the case. The works in London are two from a series of six pieces that arise from a sort of grotesque joke drawing game the Brothers began 10 years ago with their older brother, actor and musician Lukas Haas. “It was our 21st birthday and the three of us were competing for two hours to make each other laugh,” says Simon.” (Think “ducks with huge dicks” and “a turtle with a bow tie, with his legs crossed and his balls hanging out.”)

Humor is the wooden skin to the Haas Brothers’ horse, at least in these still relatively early stages of their career. “We use humor in our art to start to relate to somebody,” Niki explains. “If they can sit there and laugh at a bronze sculpture like it’s a joke, that’s pretty cool. That’s the door into that person’s life. If you can make them laugh, they understand you. And as soon as they understand you, they can sympathize with you and then you can start to change the way their mind works.” As of yet, the brothers have no set agenda on how they will change the world, “but it’s going to be positive,” says Niki. “It’s going to be coming from love—as hippie-dippy as that sounds.”

“You can’t change the way everyone thinks when you’re only talking to 2% of the people on Earth.”

To many in the contemporary art world, that might sound as foreign as debuting works in a hotel courtyard in collaboration with a talent agency. So much of postwar art history has been predicated on a level of critical distance from emotion. And more recently, cynicism, sarcasm, and cleverness have crept in as major modes of expression. But, generational memory being what it is, the tide may be changing. “I think the younger generation of artists that’s coming into being right now, they’re inspired by possibility; the notion that you can be creative in any number of formats or mediums or platforms,” says Roth. Though the lawyer-cum-agent’s business hinges on that being largely true, he’s by no means alone in the proposition. Among other notable exponents of the shift back toward positivity in culture is a contingent of thinkers and art theorists who have gathered under the moniker of Metamodernism.
For Simon and Niki, scale of impact has been the chief concern when deciding the appropriate venue for their projects. “We want to bring art to the people, to change the way people think about the world,” says Niki. “And you can’t change the way everyone thinks when you’re only talking to 2% of the people on Earth.” It’s led them to the Rosewood, and to the Coachella music festival before it. But this is very much just the beginning of the conversation, the brothers explain. It’s a stage at which to say, “Hey, how are you? Nice to meet you. We’re the Haas brothers,” says Niki. “We’re going to make you laugh. But get ready, because our message from here on out is going to be all about the way we think the world should operate.”