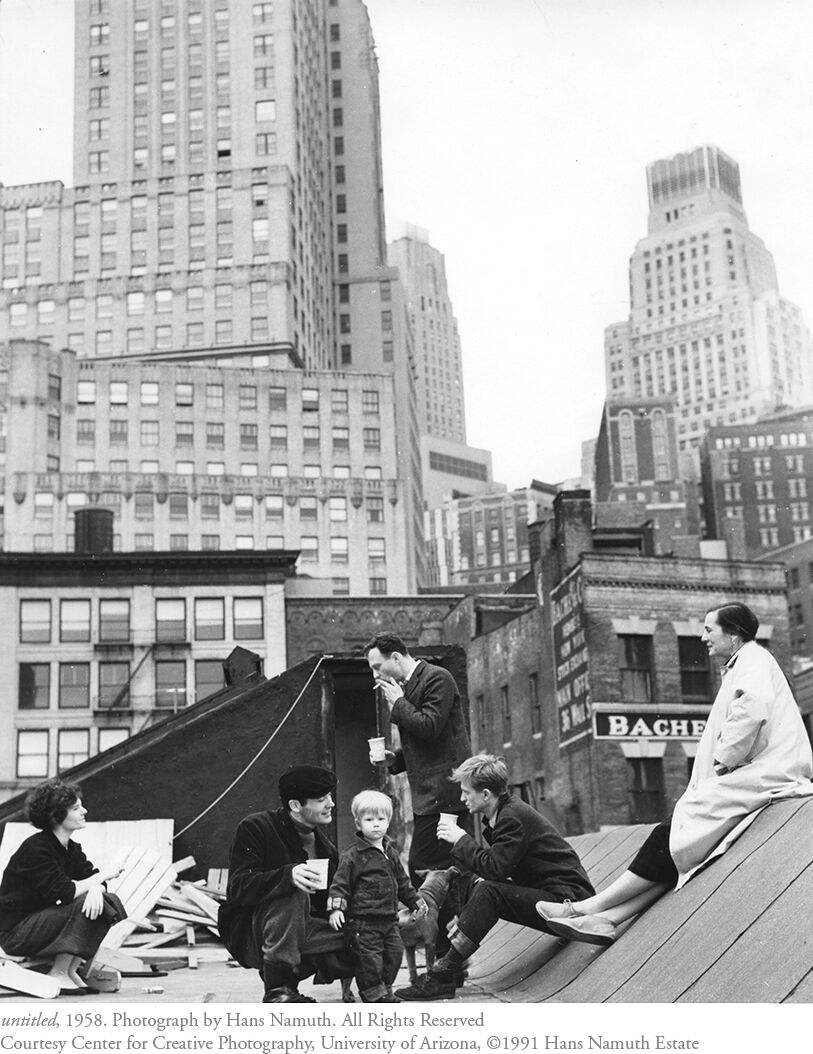 Over the centuries, the coast of Lower Manhattan has been reshaped by tides, fires, demolition, development, and various colors of gentrification. In its long, dramatic history, one chapter stands out: the brief few years when a group of artists moved in and made the rundown neighborhood their home.
When the Dutch arrived in the 1600s, Manhattan was a different land. They tamed and straightened the marshy shoreline by building a series of polders and inlets, called slips, which eased the loading and unloading of maritime cargo. Soon, the foggy isle was a bustling port. Herman Melville, who was born in the neighborhood, set the scene in Moby-Dick: “There now is your insular city of the Manhattoes, belted round by wharves as Indian isles by coral reefs—commerce surrounds it with her surf.”
Eventually, the shoreline expanded into the East River as, one by one, the slips were filled and paved over. One inlet, Catharine Slip, boasted a lively market, where fishermen sold their catch and amblers took in the sights, sounds, and, then as now, the smells. However, as the New York Times noted in 1889, the market was no match for “the hand of progress. Around it cluster memories of customs and phases of early metropolitan life that are now seldom recurred to.” 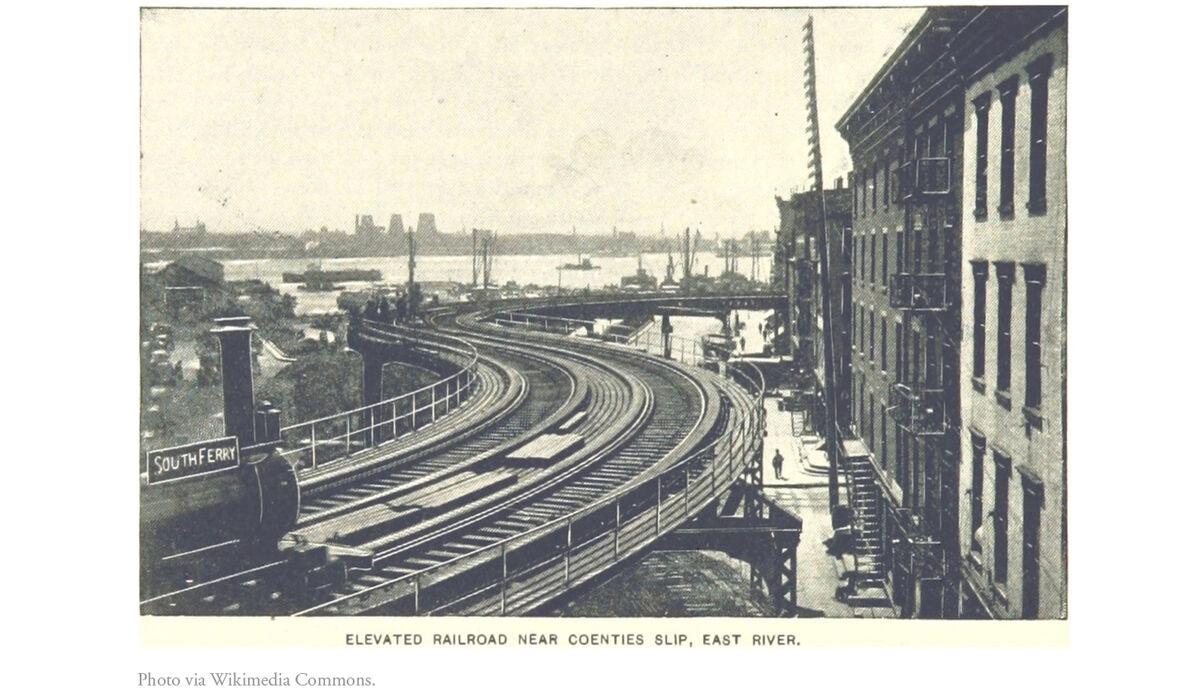 One of the largest inlets, and the last to be paved over, was Coenties Slip, now an unassuming courtyard in the Financial District, a few blocks from the modern coastline. The slip was named for Conraet Ten Eyck and his wife, Antje, a moneyed Dutch couple who lived in the area in the 1600s. (“Coenties,” most historians agree, is a contraction of Conraet and Antje.)
As commerce dried up and the shipping industry moved elsewhere, the saltwater-kissed warehouses fell into disrepair and abandonment. Yet in the 1950s and ’60s, as
Abstract Expressionism
gave way to
Minimalism
, a small group of artists moved in.
By many accounts, the first of the group was
Fred Mitchell
, who moved to Coenties Slip in 1951. He passed his loft to
Robert Indiana
in 1956, the same year
Ellsworth Kelly
moved to the neighborhood.
Jack Youngerman
and his wife, Delphine Seyrig, leased a nearby building and rented rooms to several artists, including
Agnes Martin
. By 1960,
James Rosenquist
and
Charles Hinman
called the slip home as well.
The artists sought cheap housing, space, light, and, for many of them, an escape from the uptown art scene and the so-called 10th-Street style that was overtaking Greenwich Village. What they found were big, abandoned buildings strewn with rope, masts, planks, ships’ wheels, and sailcloth—the relics of a vanished industry.
Though their practices were often wildly different, the loose collective took comfort in the creative energy of their fledgling community, one that seems to have been notably relaxed. “My time there was, on the whole, a kind of solitary struggle with my own work,” Youngerman has said, “and not competition with other peoples.” 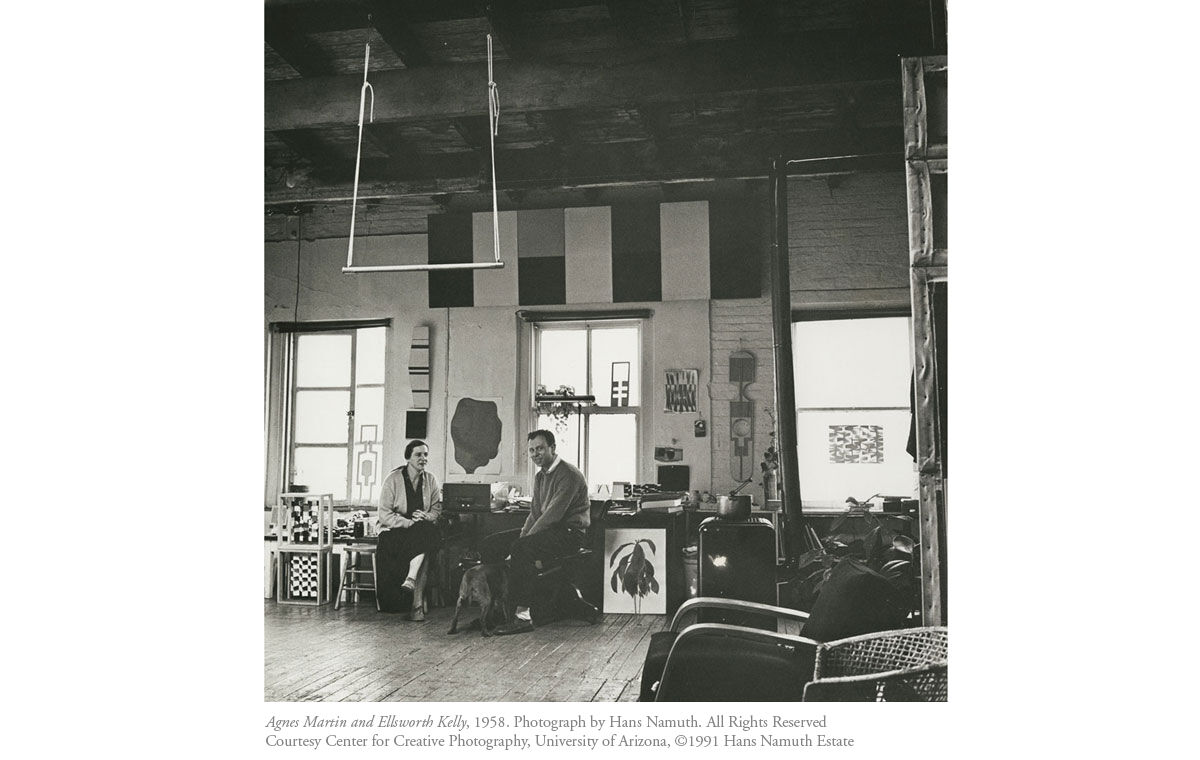 Advertisement
Surely the group also commiserated about the vagaries of semi-legal housing, which can be a powerful unifying force. Heat, hot water, and basic amenities were in short supply, though socializing—often at one of the numerous bars in the vicinity—was part of the deal. “I paint to make friends,” Martin once said, “and hope I will have as many as Mozart.” (Coming from Martin, the statement is rather surprising, given the solitude she pursued later in life.)
As with her friends in Coenties Slip, the living situation had a subtle but perceivable effect on Martin’s work, especially her early paintings. Several pieces from the late 1950s and early ’60s look like draped sailcloth, while others take on the brilliant blue of the sea. “My paintings have neither objects, nor space, not time, not anything—no forms. They are light, lightness, about merging, about formlessness breaking down form,” she once said. “You wouldn’t think of form by the ocean”—or, in those years, by the East River.
In the grander New York timeline, their Coenties Slip community didn’t last long. By 1964, Indiana had moved to the Bowery in SoHo, which was quickly becoming New York’s latest creative capital. Martin left the city in 1967, when she took an extended break from painting. She returned to the great open expanse of New Mexico—worlds away from the decrepit wharf she had called home.
Coenties Slip continued to change, too, as old buildings were razed and tremendous towers filled the skyline. Somewhat unexpectedly, art returned to the area: In the early 1970s and ’80s, the Whitney Museum of American Art rented a space downtown, paying just a dollar a year in rent—a reward, perhaps, for assistance in revitalizing the blighted area. Ironically, the 53-story building (which the museum has since left) sits atop land that once housed several of the Coenties lofts. A remarkable exhibition from 1974 paid tribute to the coincidence by showing the work of nine artists who lived and worked in the area during its quiet artistic heyday. 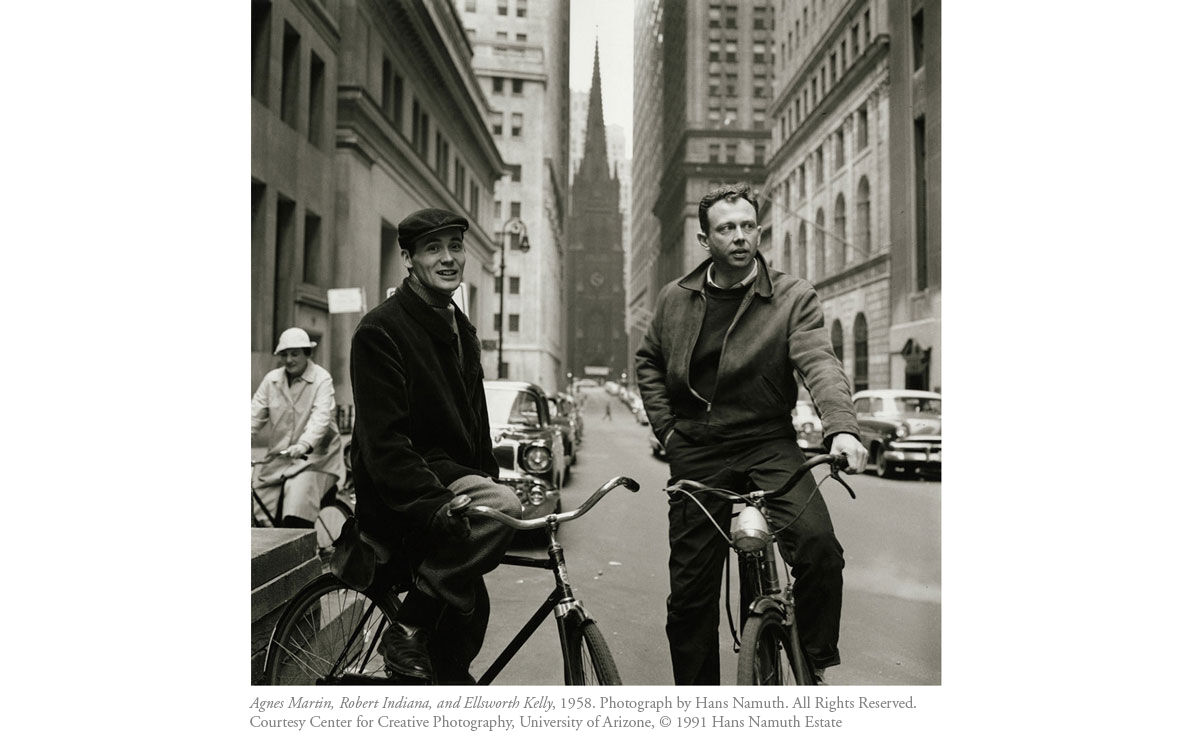 Robert Indiana, one of the show’s key figures, was deeply affected by life in Coenties Slip. His now-iconic work incorporated ship parts and lettering found scattered throughout his airy loft. “[A]lthough it was a small building, I was still on the top floor,” he said in a 1965 interview, “and when I looked out on the slip, I always looked down on the slip.”
The Melville Triptych (1961), which the artist lent to the Whitney for the 1974 show, paid homage to that view and to Melville himself: “Go from Corlear’s Hook to Coenties Slip,” Melville wrote, “and from thence, by Whitehall, north-ward. What do you see?—Posted like silent sentinels all around the town, stand thousands upon thousands of mortal men fixed in ocean reveries.”
As Indiana looked out from his loft—the same view for eight years—he considered himself to be one of those sentinels watching over the old slip. “I looked out my window,” he has said, “there it was.”
Ryan Leahey
Related Stories