Abbas, Students of the Al Azhar College attend Friday prayer in the auditorium, transformed into a mosque for the occasion. Jakarta, Indonesia, 1989. © Abbas / Magnum Photos, courtesy of Arthur Ross Gallery, University of Pennsylvania.

“My relationship with God is professional,” says Abbas. “He doesn’t tell me what to do and I don’t tell him what to do. He has his believers.” That’s good enough for the single-named Magnum photographer. God is not Abbas’s vocation, but rather a major subject of his work, one that’s sent him across the globe to capture faith-based cultures and humanity in the throes of conflict—often turning his lens on their troubled interaction.
His reportage began during his formative years, which took place during the Algerian War of Independence (1954-62). But he didn’t turned toward the subject of religion until after covering his native Iran’s 1978-79 Islamic revolution. “Religion was of no interest to me. The Iran Revolution was,” he explains. But he “could see the waves of passion raised by the revolution were not going to stop at the borders.” Those waves of passion were the rising tides of Shia Iran, which led to a theocratic government replacing the Shah and his secular officials in power. The face of the revolution, Ayatollah Khomeini, became nearly synonymous with Abbas’s portrait of him; the Ayatollah fills the frame, his brow furrowed. Since then, the photographer has gravitated toward religion’s many expressions. 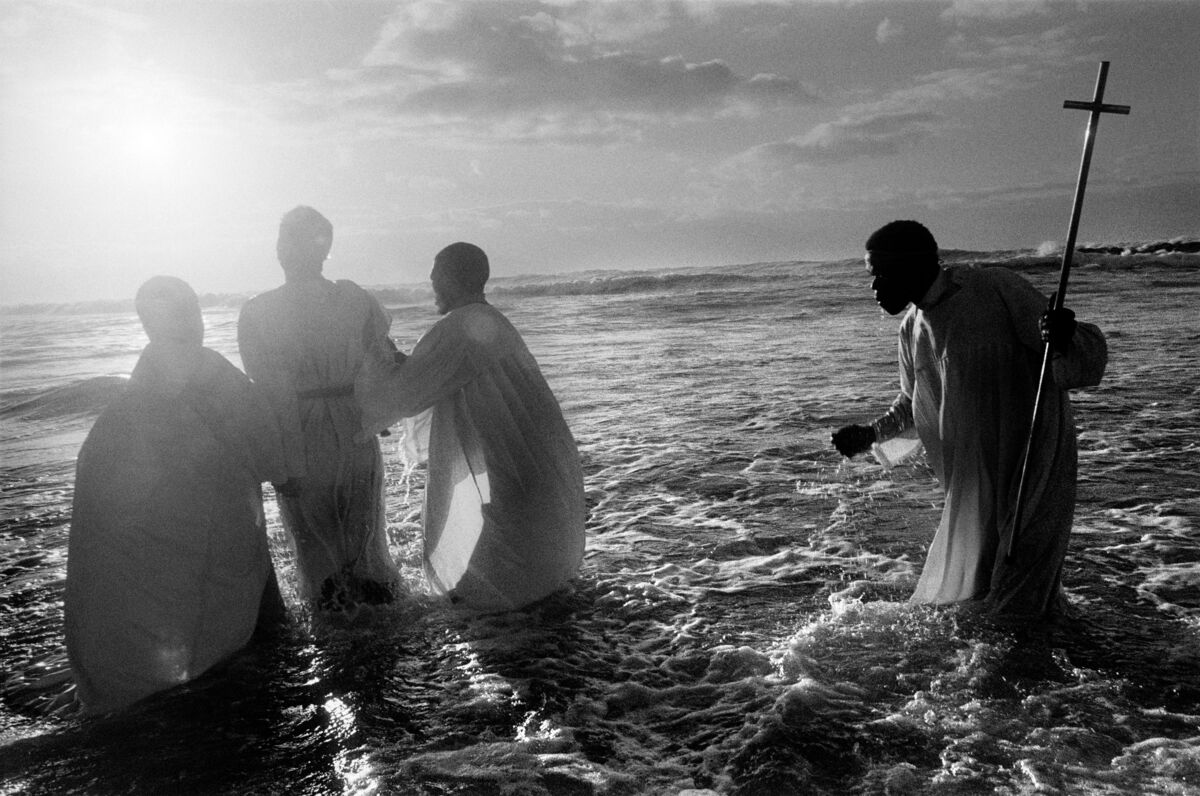 Abbas, Every Sunday, at dawn, priests of the Zion Church, from the Khayelitsha black township, take their newly converted congregation to the sea to be baptized through immersion. Cape Town, South Africa, 1999. © Abbas / Magnum Photos, courtesy of Arthur Ross Gallery, University of Pennsylvania.

Abbas has amassed an extensive body of material during the three and a half decades that he has framed faith—enough for quite a few books, including two tomes on Islam. Given this long exposure, one might think Abbas could provide answers or at least insight about the current climate of religious extremism in parts of the Middle East. Yet he says, “My aim is not give answers but ask questions,” by capturing “suspended moments.”
In a new exhibition, on view at the University of Pennsylvania’s Arthur Ross Gallery through March 20, 2016, “Abbas: Children of Abraham,” the photographer presents 66 images in his first comprehensive series of the three kindred religions: Islam, Christianity, and Judaism. While the septuagenarian Abbas has been shooting these since the 1970s, our times call for introspection around both the ruptures and tensions that exist between the religions and their common ground. “Look what’s happening in the world—my god!” he exclaims, with a weary chuckle. The series expresses a narrative, one Abbas conjured from his archives, though he won’t put words to the story’s arc, preferring that viewers use their eyes. “For me, photography is photo-graphy—writing with light,” he says. 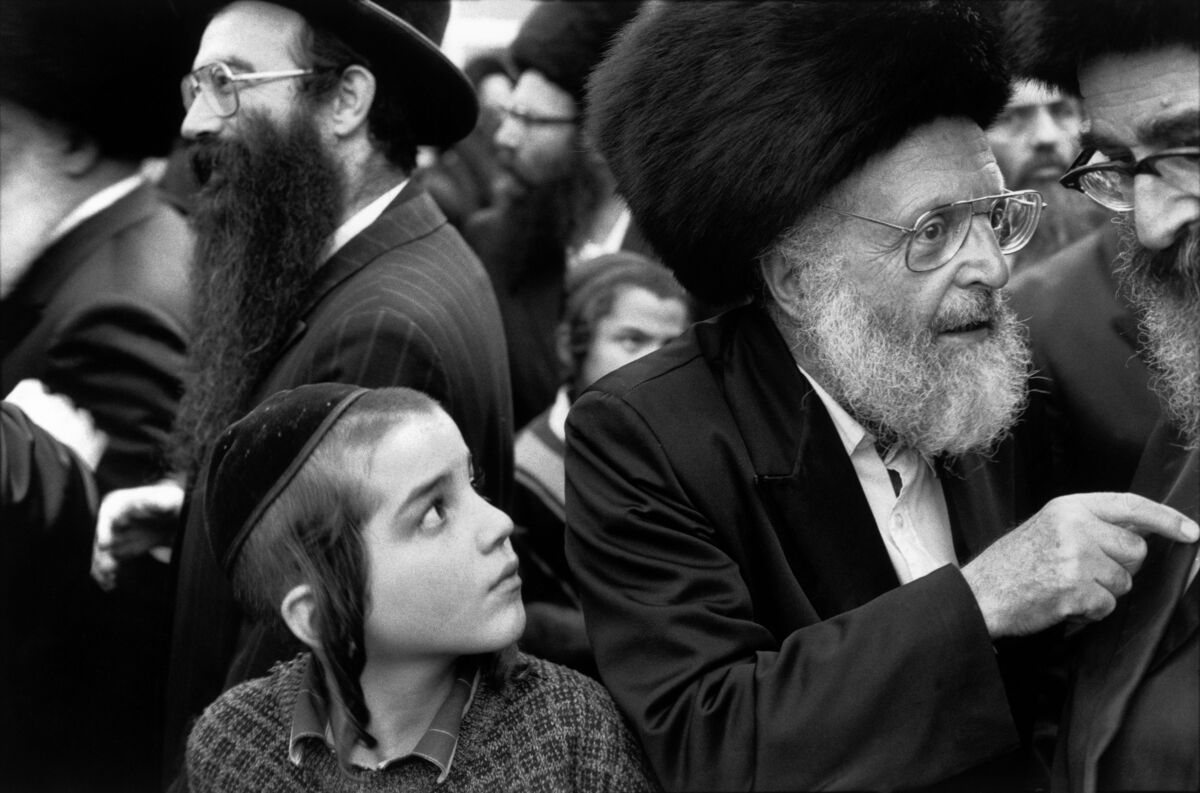 Advertisement
Even the most intimate of the photographer’s images—some digital, most silver gelatin shot on 35mm or 50mm cameras—are arresting. In a 1987 portrait, a woman in full Niqab hovers over a microscope with spectacles balanced atop her facial veil. A family mourns the death of President Gamal Abdel NASSER (1970), an image of a woman and her family framed in a Cairo window, echoes
Rembrandt
’s Syndics of the Drapers’ Guild (1662). (Abbas captured the image spontaneously while passing and made the art-historical connection years later.) In another image, a Cuban woman holds up a bible, in 1997, before proselytizing the faith. 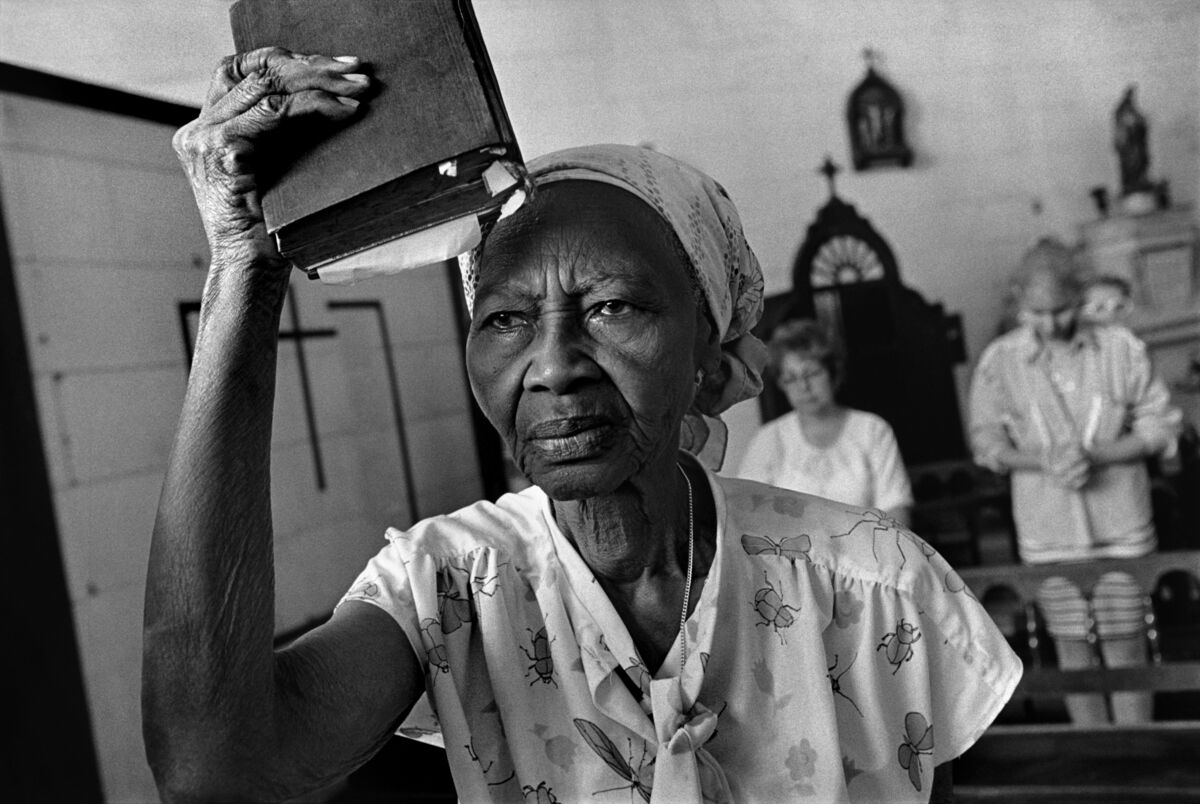 Abbas, Church of Cristo de Buen Viaje. A woman listening to a sermon raises her Bible as a flag, before going to visit homes to take in “the Lord’s words.” Havana, Cuba, 1997. © Abbas / Magnum Photos, courtesy of Arthur Ross Gallery, University of Pennsylvania.

“I have to understand what’s happening there,” Abbas says. “When I photograph people, I’m not interested in the person but what they represent.” This may seem like a cold calculation, but that critical distance is both a fact of the photographer occupying a position as outsider, and a necessary survival mechanism. “You can never become the other—you can only pretend to become the other,” he explains.  “Even then, if you’re immersed a long time, you have the option of leaving. They don’t.” Among the numerous communities Abbas has temporarily embedded himself within are Chinese Muslims, Ethiopian Jews, and Minnesota evangelists. “You have to be able to operate, put an emotional curtain between what’s happening and you,” Abbas says. “It doesn’t mean you don’t feel it, but you keep it inside.” 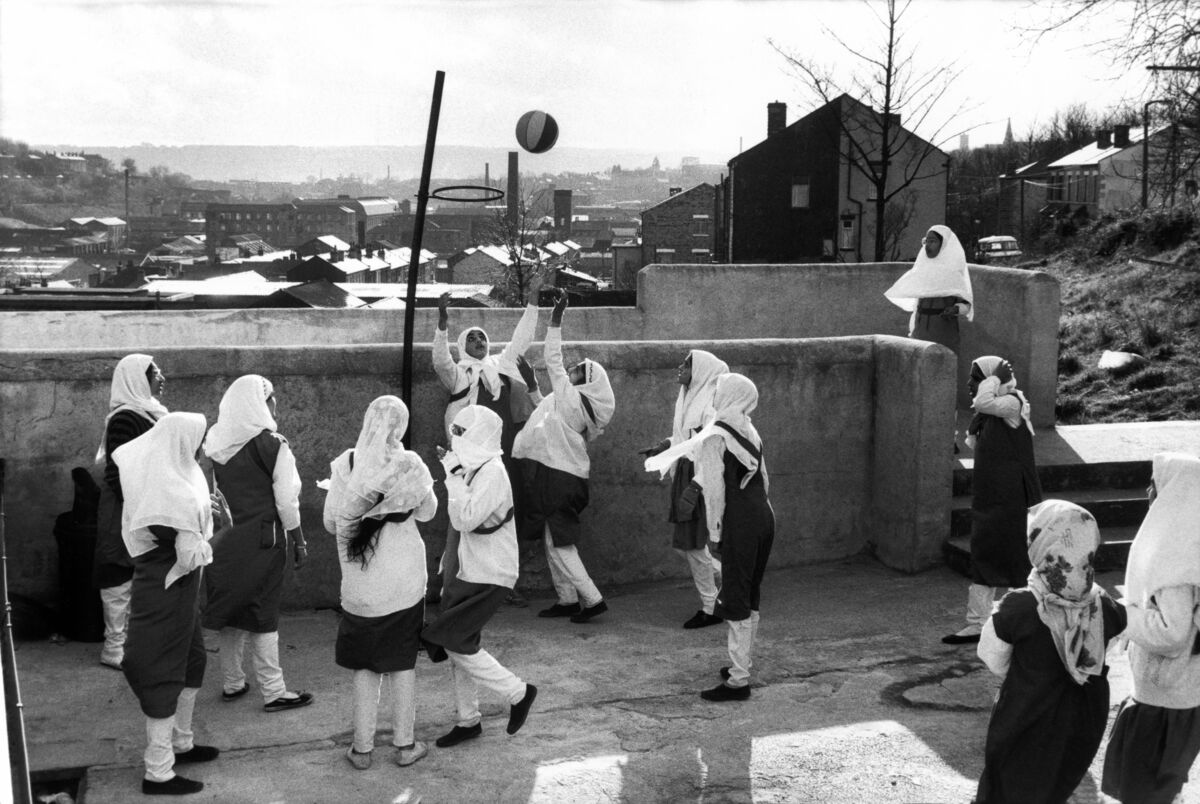 Despite the hatred, the deaths, and the displacements that can result from the three religions Abbas captures, people can’t seem to escape a yearning for a higher power. “I’m not saying God created man,” hes says, “I’m saying man created God to his needs, not to his image but to his needs.” Abbas’s journey has put him smack in the center of the violence, and yet “it’s made me more tolerant,” he says, “because it made me understand why people need to believe in God.” He concedes, though, “It’s probably made me more intolerant in what they do in the name of God, all the stupidities.”
Does a show like “Children of Abraham” offer resolution? “I can tell you that people read photography in totally different ways,” Abbas notes, evading a conclusive answer. Yet in times where priests and pundits, mullahs and mouth-pieces so often spout divisive ideologies, the charged silence conveyed in Abbas’s images speak with greater reason, conviction, and reverence. He is, after all, a professional.
—Julie Baumgardner
Related Stories