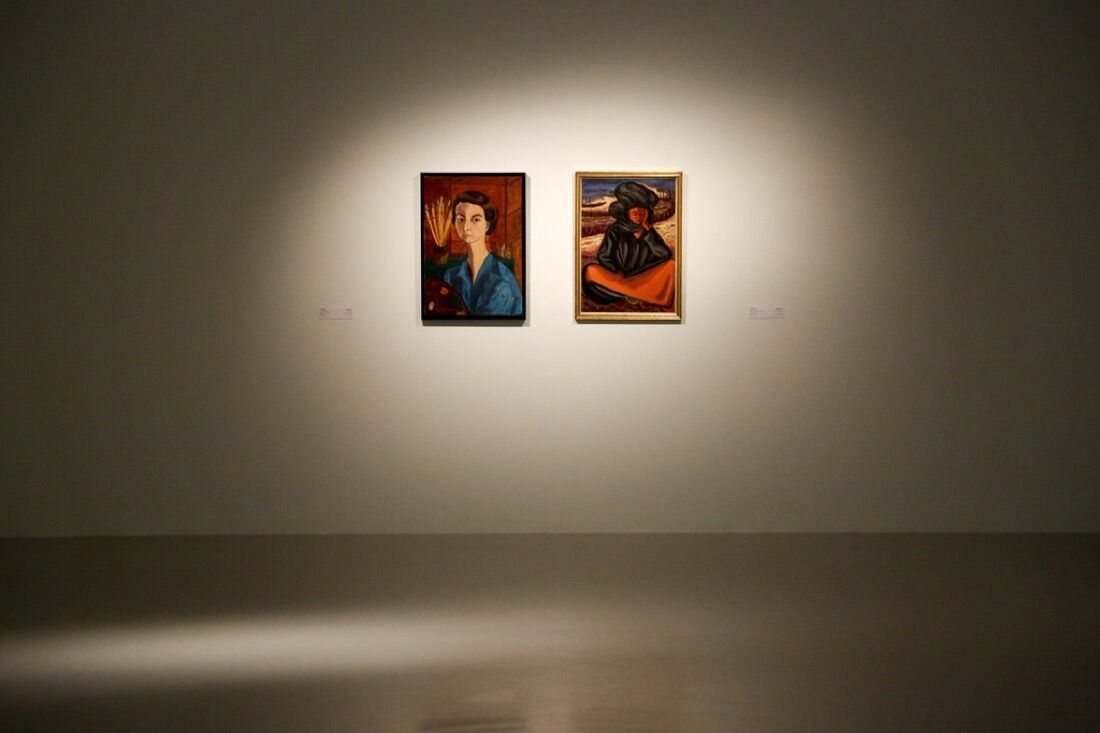 Installation view of "Focus: Works from the Mathaf Collection" at Mathaf: Arab Museum of Contemporary Art, Qatar (2015-2016). Courtesy of the museum.

Since Mathaf: Arab Museum of Modern Art’s inception, the world has seen the museum’s unmatched permanent collection of modern Arab art in exhibitions only a handful of times, and even then only in bits and pieces. These include the museum’s opening in December 2010; “Forever Now,” which showcased the work of five Arab modernists in 2012; and a permanent display of its collection inaugurated last year—although with only a selection of works by 100 artists, assembled rather haphazardly. Currently, the Mathaf is presenting its newly initiated “Focus: Works from Mathaf Collection” series, which features five solo exhibitions presented simultaneously, each drawing attention to a particular artist (primarily working in the second half of the 20th century).
The scarcity with which Mathaf stages exhibitions from its permanent collection is puzzling and distressing because the institution is one of the world’s only museums focused on modern Arab art, holding over 9,000 pieces in the genre. For over three decades, Qatar’s Sheikh Hassan bin Mohamed bin Ali Al Thani has been collecting modern Arab art, culminating in the priceless trove that formed Mathaf. When the museum opened in 2010, the collection contained 6,300 pieces, with the earliest work dating back to the 1840s. 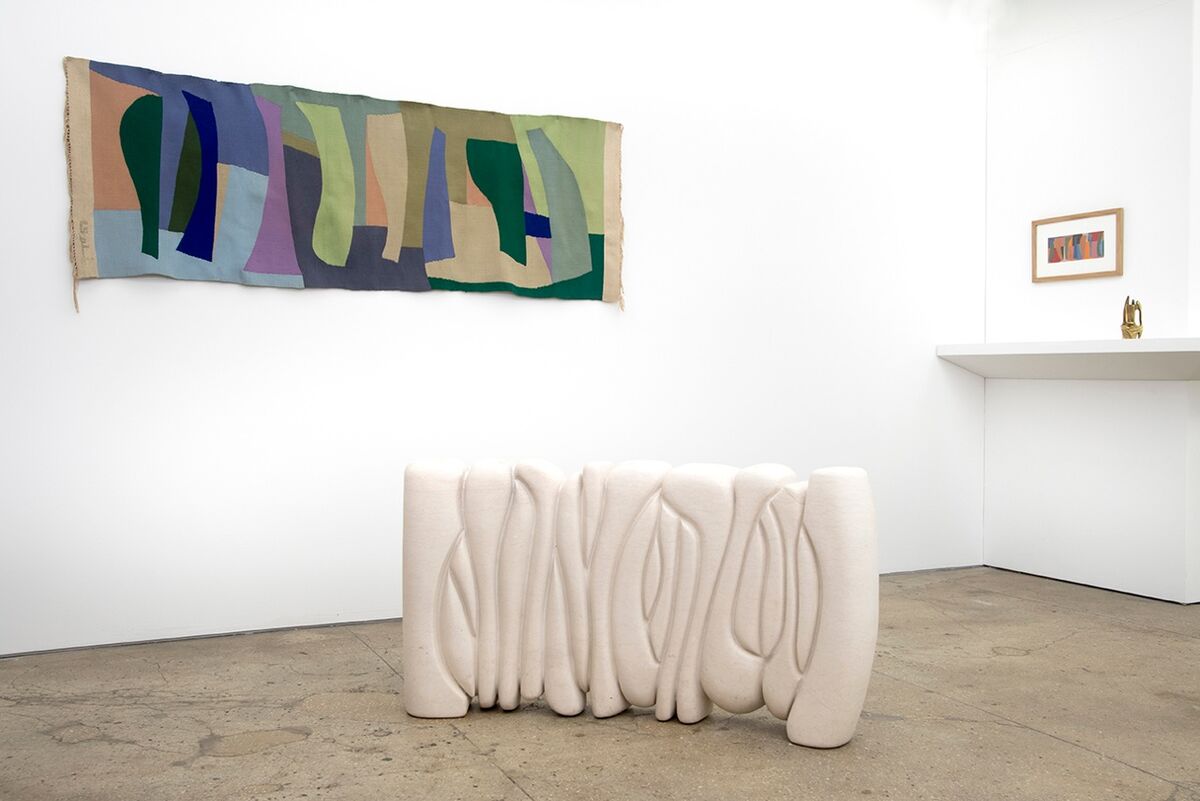 “Focus,” which runs until February 14th, 2016, consists of five solo exhibitions featuring the work of Lebanese
Saloua Raouda Choucair
(who currently has her first solo U.S. exhibition, at age 99, at CRG Gallery in New York this month), Egyptian Inji Efflatoun, Moroccan Farid Belkahia, Qatari Faraj Daham, and Saudi
Abdulhalim Radwi
, each put together by Mathaf curators, with the exception of Daham’s showcase, which was conceived by guest curator Mayssa Fattouh. The choice of which Arab modernists to present was left to each curator. The standout rooms are those of Belkahia, Choucair, and Efflatoun, which are informative, eye-opening, and powerfully transportive. Through the chosen works, one is able to explore the eras, thoughts, and themes that dominated these artists’ respective practices. 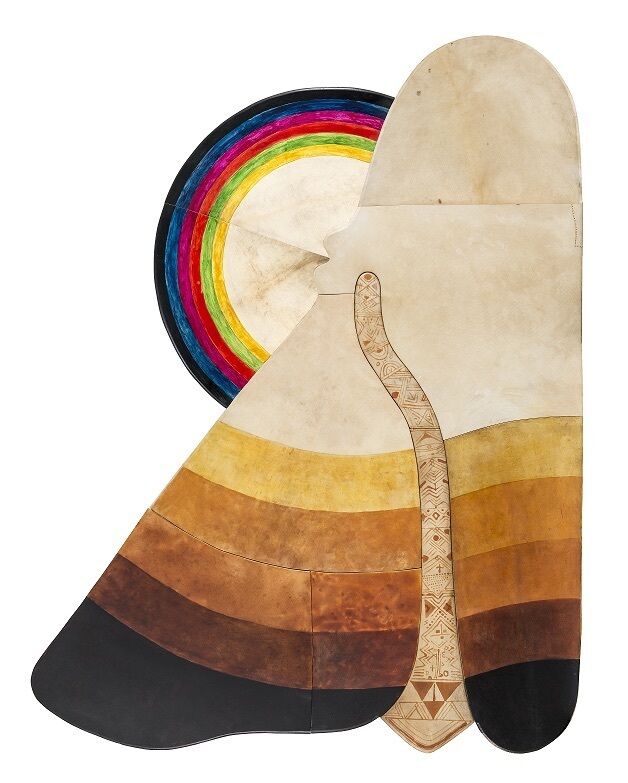 Farid Belkahia
Aube (Dawn), 1983
Mathaf: Arab Museum of Modern Art
Advertisement
Director Abdellah Karroum chose Belkahia after pondering the notion of beginnings, something that the late artist had discussed in the weeks before his death last year. The artist, known for his abstraction, replaced the canvas with leather, copper, or wood, and substituted paint with materials such as henna and saffron. In his often large-scale pieces, he incorporated letters from the Touareg and Berber alphabets and the khamsa, the hand of Fatima, daughter of the prophet Mohammed. Karroum and Sheikh Hassan visited the artist in his Marrakech studio and listened to Belkahia “talk about birth, emergence, and aube [“dawn” in French].” It was during this visit that Mathaf acquired several works, many of which are currently on display in a wonderfully curated gallery that exudes ideas of origins. Two highlights in this space are a series of six panels that detail the transformation of a hand as a symbol of beginnings and a wall of drawings, that, says Karroum, is part of Mathaf’s strategy “to show a process and reveal an archive.” 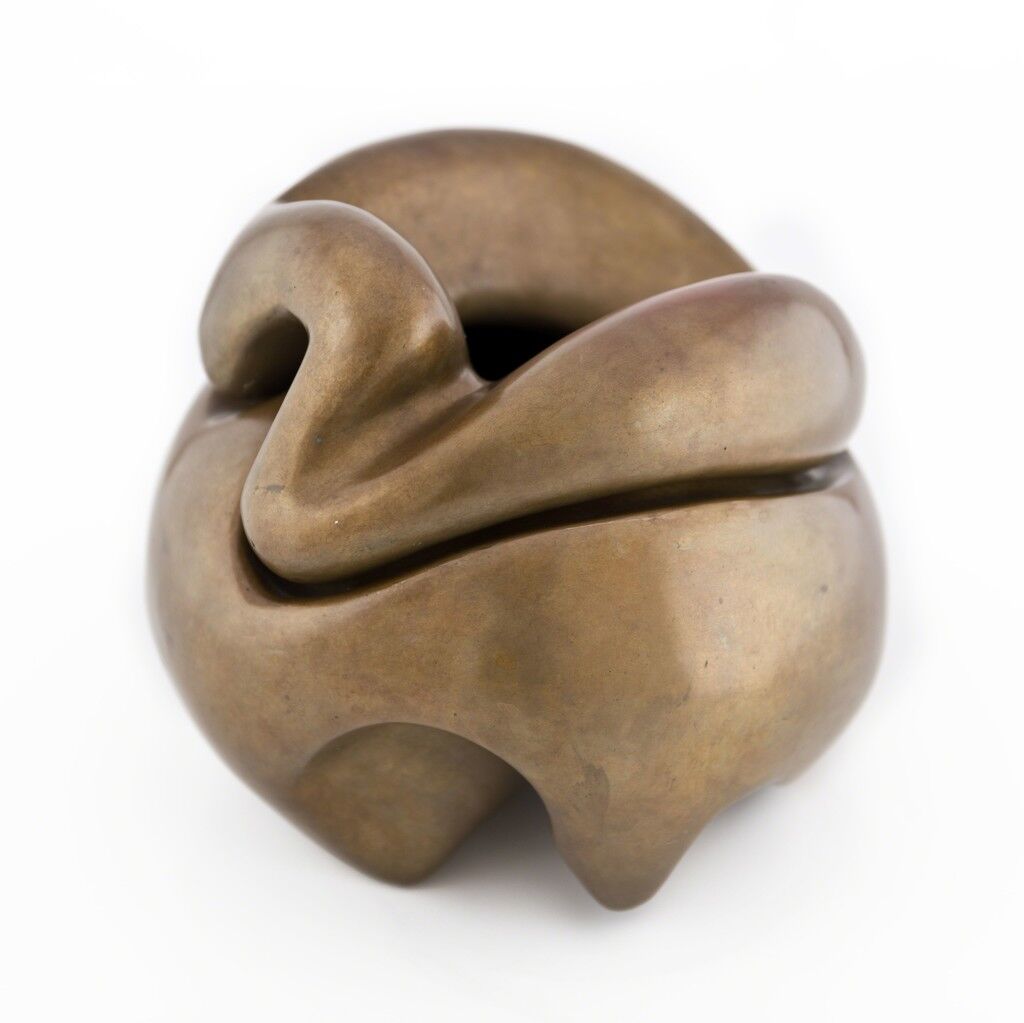 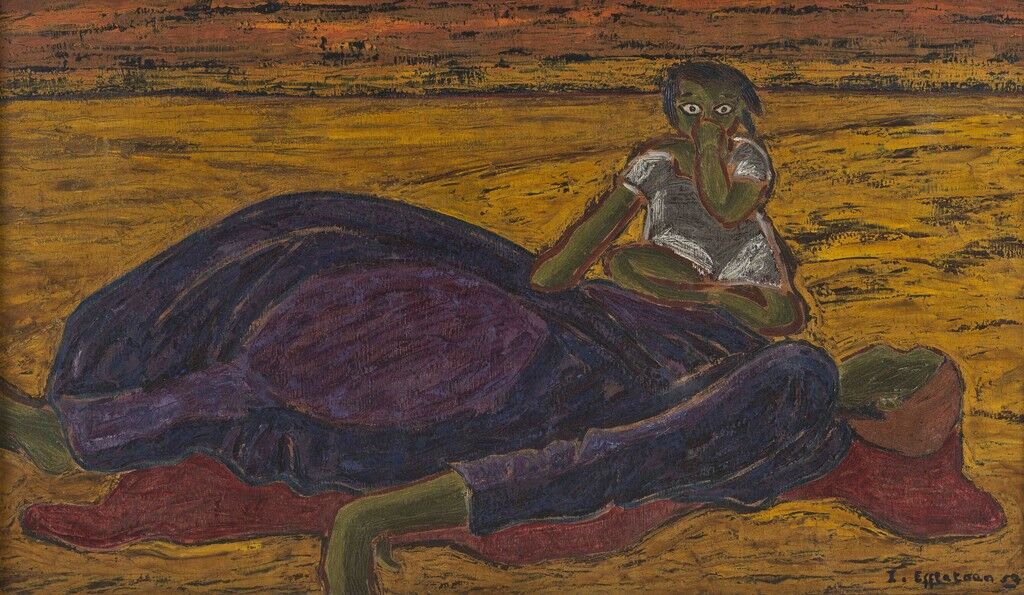 Inji Efflatoun
Inji Efflatoun, 1957
Mathaf: Arab Museum of Modern Art
Choucair, on the other hand, didn’t make such drawings, instead writing notes in French, Arabic, and English on scraps of paper “with lots of mathematical equations,” says Laura Barlow, a curator at Mathaf. An abstractionist who drew inspiration from geometry, Sufist belief, Islam, and Arabic poetry, Choucair was a pioneer—a woman and sculptor at a time when non-representational work was unappreciated in the Middle East. “I think that she’s a very strong character and really knew what she wanted to achieve,” says Barlow, who visited the artist’s studio in April. “Her sculptures have a very strong holistic essence and there is the idea of pushing boundaries for knowledge and learning. You can see that she has implemented this across everything she’s done.” Sheikh Hassan acquired work by the artist in the ’90s and commissioned her to enlarge some pieces. Titled “The Meaning of One, the Meaning of the Multiple,” Choucair’s solo presentation in “Focus” includes a mix of pieces—from gouache paintings and Plexiglass sculptures to bronze and brass works. 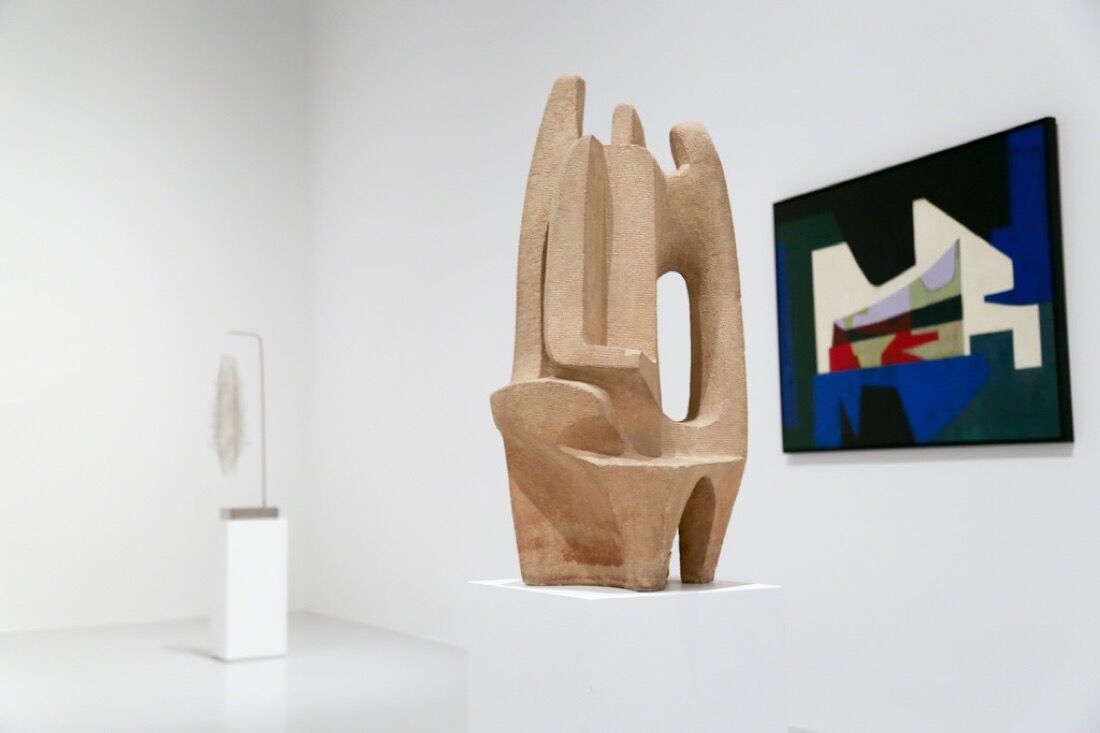 Installation view of "Focus: Works from the Mathaf Collection" at Mathaf: Arab Museum of Contemporary Art, Qatar (2015-2016). Courtesy of the museum.

Pioneering is to Choucair what activism was to Efflatoun, who was wholly concerned with the human condition. This is evident in her solo showing, curated by Mathaf’s Leonore-Namkha Beschi, which features paintings of jailed women, many of which underwent restoration in Mathaf’s new laboratory. These works were inspired by Efflatoun’s imprisonment in the late 1950s, when then-President Gamal Abdel Nasser sought to purge Egypt of communists. The room is theatrical—an intentional effect, says Karroum.
“The ‘Focus’ shows require a lot of research, are demanding and time-consuming,” says Karroum. “This is not one exhibition. It is five solo shows.” In the spring, he says, a new set of exhibitions will be staged with the help of guest curators—suggesting Mathaf is suffering from being somewhat understaffed. “If you show me where the researchers and curators are, we will hire them,” says Karroum, whose team is also working on Mathaf’s online encyclopaedia, as well as a major publication due in December, which will feature 400 works from the collection. The Moroccan-born director says that, in a decade, several tomes will document 5,000 works of the over 9,000 in the museum’s holdings. Though nothing surpasses the experience of seeing and feeling an artwork in person, a publication may come close, especially in that it can cultivate greater scholarship around such prized works. The “Focus” series is a great start, but for the world’s only museum with such a robust collection of Arab modernist works, more can be done.
—Myrna Ayad
“Focus: Works from the Mathaf Collection” is on view at Mathaf: Arab Museum of Modern Art, Oct. 11, 2015–Feb. 14, 2016.
Follow Mathaf: Arab Museum of Modern Art on Artsy.
Related Stories