The Most Remarkable Art-Historical Discoveries of 2016

Abigail Cain
Dec 22, 2016 4:55pm
Sometimes it takes cutting-edge technology to uncover new secrets about centuries-old artworks. Sometimes it takes years of good old-fashioned detective work. And sometimes, it's nothing more than luck. From a Caravaggio in a French attic to a cache of 14,000-year-old cave drawings, here are the 10 most notable art-historical discoveries of 2016.

Archaeologists unearthed an 8,000-year-old figurine in Turkey, one of a rare few that have been found in one piece. 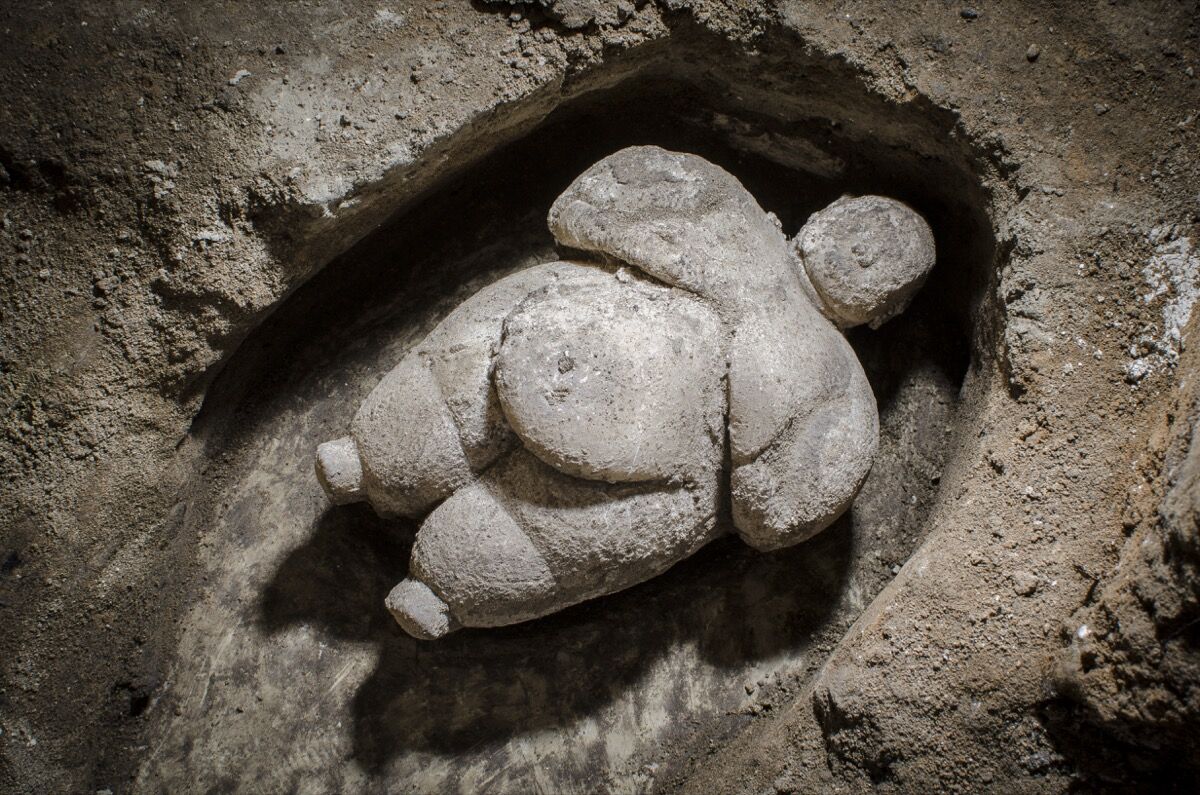 The discovery was made at a Neolithic site in Çatalhöyük where a series of ancient houses were built one on top of another, leaving behind a trove of artifacts. This year’s major find was a female figure, expertly carved out of marble sometime between 6300 and 6000 B.C.E. Weighing just over two pounds, the sculpture is six inches tall and depicts an elderly, full-bodied woman in surprising detail. Artifacts of this sort are often associated with fertility goddesses, although one archaeologist has suggested that this particular figurine represents an actual person who achieved great status within Çatalhöyük’s egalitarian society. While this is not the first statuette uncovered at the site, most previous finds have been crafted from clay and worn down over the years—making this well-preserved marble figure a particularly remarkable find.

A French family found a long-lost Caravaggio in their attic.

Advertisement
The owners of the house had gone upstairs to investigate a leak. Instead, they stumbled upon a remarkably well-preserved canvas depicting Judith beheading Holofernes.
Caravaggio
is said to have completed two versions of this bloody biblical scene—one is currently on display in Rome, the other has been missing since the 17th century. Although it’s unlikely that scholars will ever reach a consensus on the 400-year-old painting’s attribution, several experts—including top Caravaggio specialist Nicola Spinosa—have been adamant in their opinion that this is the missing work by the Italian master. In pursuit of the truth, Milan’s Pinacoteca di Brera displayed the painting in question alongside several accepted Caravaggios in an exhibition this fall titled “Caravaggio: A Question of Attribution.” A Caravaggio of this sort could be valued at up to €120 million, but the painting will still be worth tens of millions of euros even if its origins remain disputed. Although the canvas was first discovered in 2014, it was kept hidden from the public until March 31 of this year to allow for conservation and in-depth research, including weeks of examination by the Louvre.

A doctor’s note revealed precisely how much of his own ear Vincent van Gogh lopped off. 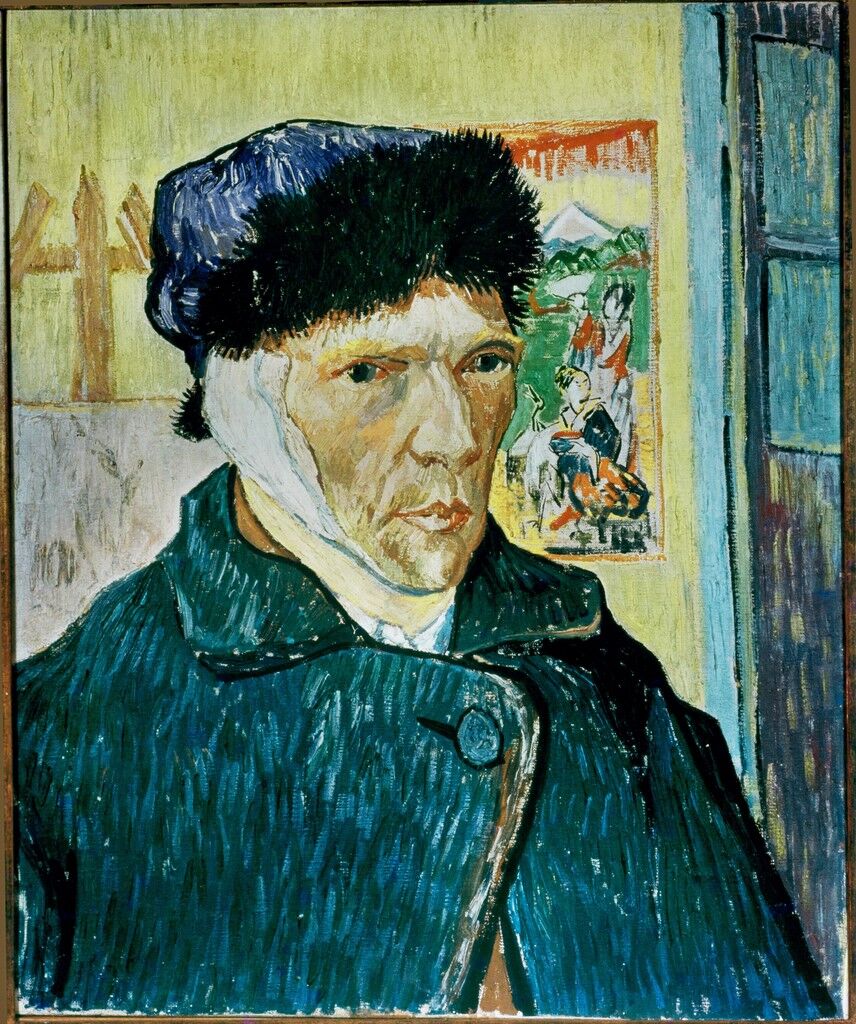 Vincent van Gogh
Self-Portrait with Bandaged Ear, 1889
The Courtauld Gallery, London
It’s been a longstanding debate among scholars: how much of his ear did the Dutch painter cut off that fateful December night in 1888? Amateur historian Bernadette Murphy, who began digging for clues in 2009, announced this year that she’d found a definitive answer. During her research, she uncovered a diagram drawn by Félix Rey, the first doctor to treat
van Gogh
when he arrived at the hospital in Arles, revealing that his patient chopped off his whole ear. The document went on view for the first time at Amsterdam’s Van Gogh Museum this year as part an exhibition focused on the painter’s mental illness. It also served as the centerpiece of Murphy’s book, Van Gogh’s Ear: The True Story, which resolved another contentious question concerning the artist’s life—the identity of the girl to which van Gogh gifted his severed ear. Long assumed to be a prostitute named Rachel, it turned out that she was actually a maid in a brothel whose given name was Gabrielle Berlatier.
A second, more contentious, van Gogh discovery this year came in the form of a sketchbook published last month. The Van Gogh Museum is now pitted against two respected experts who claim that the 65 ink drawings are authentic—a scholarly clash some have labeled “unprecedented.”

China’s iconic Terracotta Army may have been influenced by the art of Ancient Greece. 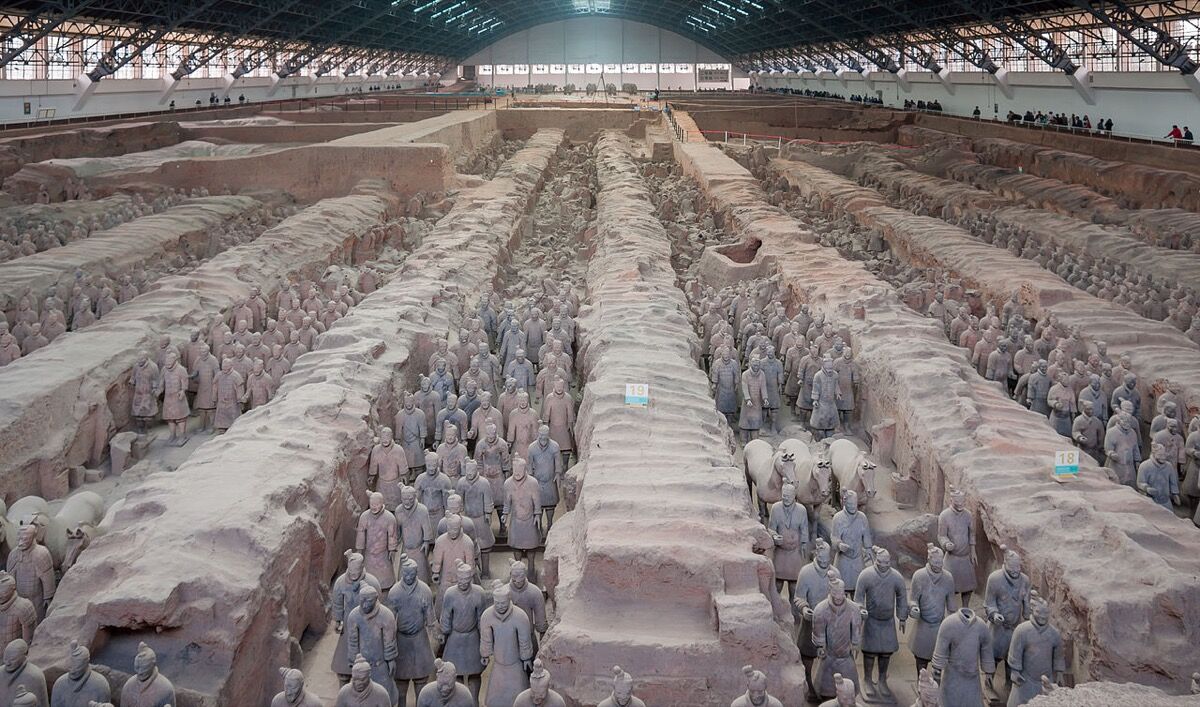 New DNA evidence suggests that close contact between East and West began much earlier than was previously thought—even before the official opening of the Silk Road in the 2nd century B.C.E. This altered timeline has sparked a new theory: The 8,000 warrior figures crafted for the mausoleum of China’s first emperor were inspired by ancient Greek art. These sculptures have always been notable for the intricate and lifelike detailing of hair and armor; even their ears are individualized, according to a 2014 study. And before the Terracotta Army, China had no tradition of life-size sculptures—in fact, previous terracotta soldiers were no more than 10 inches tall, a shift that some researchers have now attributed to Greek influences. One historian went so far as to hypothesize that a Greek sculptor may have been on site to train local artisans, although that claim has received pushback from other experts who note there is no concrete evidence for such a relationship.

Researchers attributed a painting in Missouri to Hieronymus Bosch, bringing the total number of recognized works by the Dutch master to 26.

This year marked the 500th anniversary of
Bosch
’s death—as well as the culmination of a six-year, $3.3 million undertaking focused on studying and cataloguing all of the influential painter’s works. As part of that effort, the Bosch Research and Conservation Project (BRCP) closely examined a small painting from the Nelson-Atkins Museum of Art in Kansas City previously thought to have been painted by a student or follower of Bosch. Instead, researchers re-attributed The Temptation of St. Anthony (c. 1500-10) to the artist himself and noted that it was likely the wing of a dismantled triptych. Opinions from other experts are forthcoming, but the BRCP is highly regarded among scholars. If confirmed, the painting would be the 26th surviving Bosch work worldwide and the fifth in a U.S. collection. “It’s the same painting, and all of a sudden you see it with more affection,” Julián Zugazagoitia, director and CEO of the Nelson-Atkins Museum of Art, told the New York Times. “It’s like your child who just won the Nobel Prize.”

A missing Albrecht Dürer engraving turned up at a French flea market. 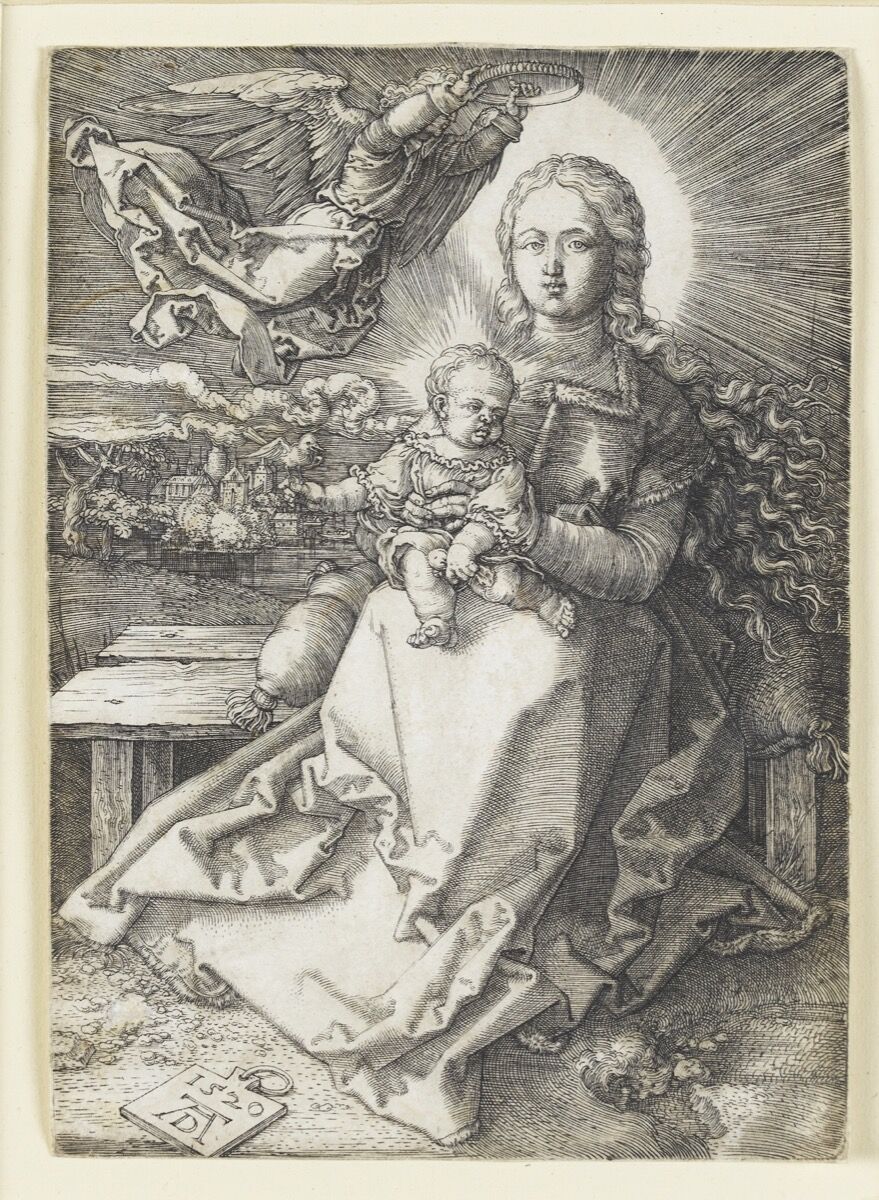 A retired archeologist spotted the work, a copperplate engraving entitled Maria Crowned by an Angel (1520), at a stall in Sarrebourg. Unaware of its origins or importance, the vendor sold it to him for just a few euros. That’s when the archeologist noticed a Staatsgalerie Stuttgart stamp on the back and realized that the work had once been part of the museum’s collection. As it turned out, the
Dürer
was listed on the Lost Art Database of the German center Kulturgutverluste—it had gone missing some 70 years earlier, presumed to be a war loss. The work, which is still in excellent condition despite its long disappearance, has been returned to Staatsgalerie where it will eventually be exhibited. 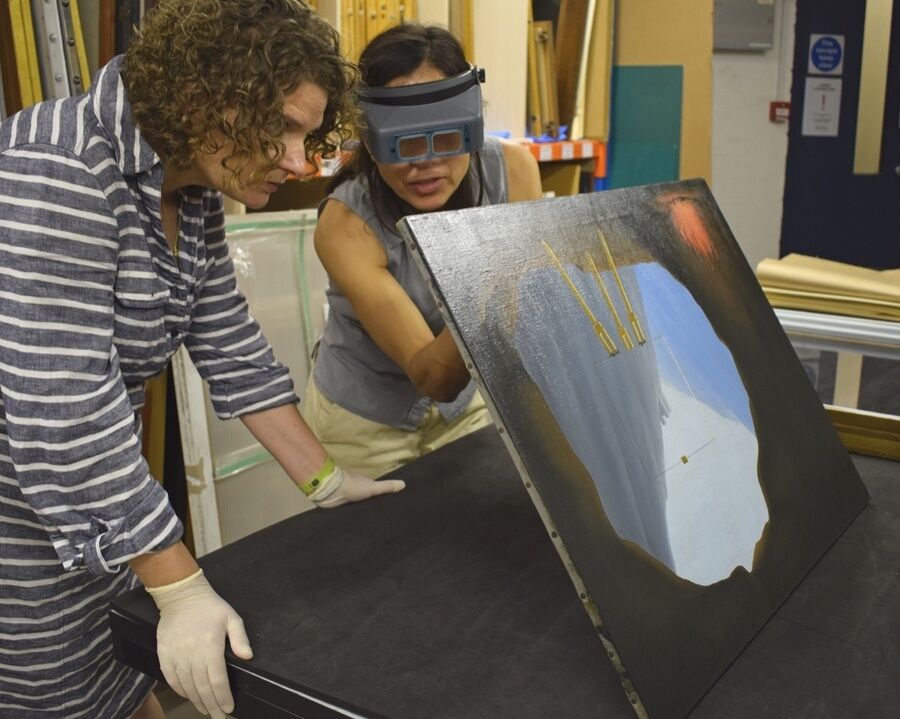 Magritte
’s La Pose enchantée (1927) had been missing for more than 80 years when MoMA researchers uncovered a section of the large-scale work beneath another painting by the famed Surrealist. A second piece was discovered under the artist’s Red Model (1935) at the Moderna Museet, Stockholm. Then, in February of this year, a third section was uncovered during routine conservation work on Magritte’s La Condition Humaine (1935), soon to be loaned to the Centre Pompidou from its home in the Norfolk Museums Service. This discovery leaves only the upper-right-hand quarter of the painting to be found. “Then this exciting art world jigsaw puzzle will be complete,” Norwich Castle Museum and Art Gallery curator Giorgia Bottinelli said in a statement.
Similar technology allowed a team of researchers in Australia to solve a long-running mystery concerning
Degas
’s Portrait of a Woman (1876–80) in the collection of the National Gallery of Victoria. Since 1922, a black stain has been steadily expanding across the work’s surface to reveal another painting underneath. But it wasn’t until August of this year that scientists were able to discern the details of this hidden image, following a 33-hour scanning process. The underpainting is now believed to be a portrait of one of Degas’s favorite models, Emma Dobigny.

Radar scans indicated that new rooms may be hidden behind the walls of King Tut’s tomb.

The search for the rooms began in July 2015 when Egyptologist Nicholas Reeves suggested that anomalies in his replica of the tomb were in fact “ghost” doorways—entryways that had been sealed and covered before Egyptian King Tutankhamun was buried. Reeves hypothesized that the additional rooms could contain the tomb of Queen Nefertiti, whose final resting place has never been found. The Egyptian Ministry of Antiquities allowed Japanese radar specialist Hirokatsu Watanabe to scan the Luxor structure in November 2015, and finally announced his findings this spring. Heralded as “the discovery of the century,” Watanabe’s analysis indicated two concealed chambers in the pharaoh’s tomb, likely containing preserved grave goods. Following this announcement, a second team of radar technicians organized by National Geographic conducted their own scans. Their data directly contradicted Watanabe’s, turning up no evidence of hidden rooms and sparking intense controversy among Egyptologists the world over. Conclusive answers will have to wait until the Ministry approves another scan of the tomb. 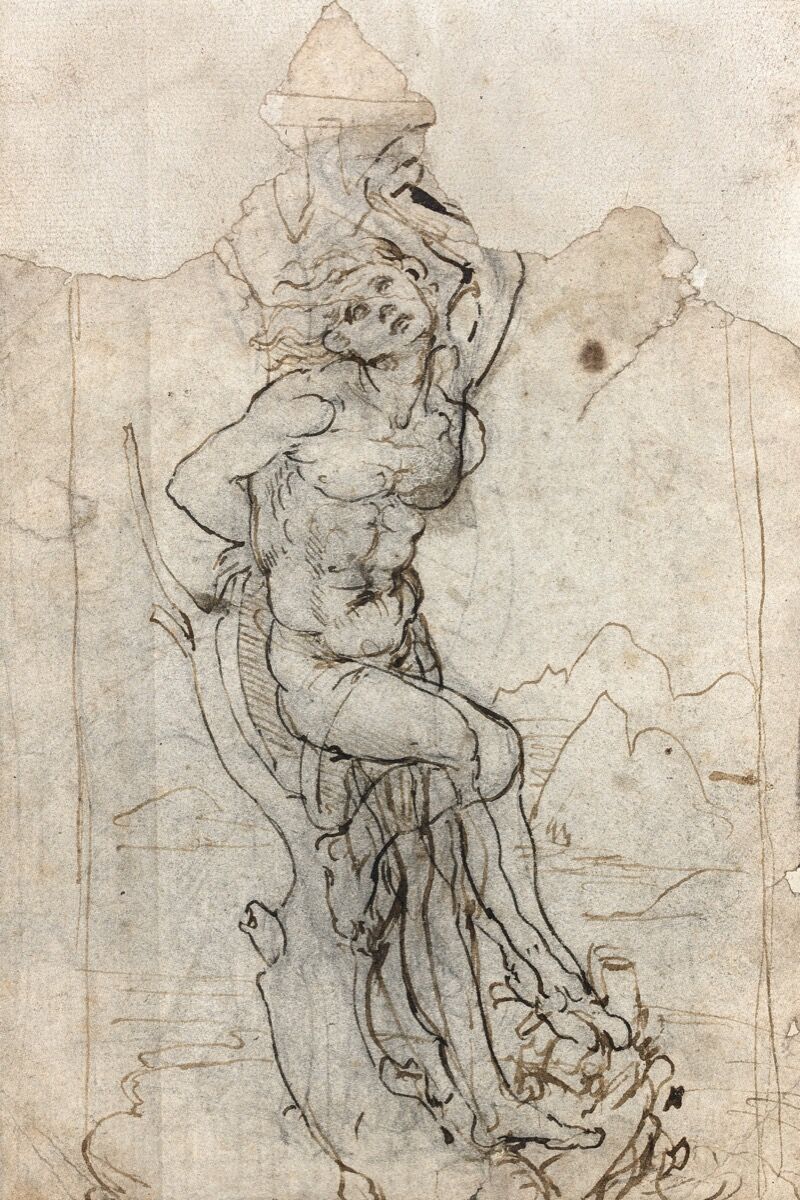 Leonardo Da Vinci, Study for a San Sebastian in a landscape. Image courtesy of Tajan.

In March, a retired doctor walked into French auction house Tajan toting a file of unframed drawings. One of them, a pen-and-ink study of St. Sebastian tied to a tree, immediately caught the eye of director of Old Master pictures Thaddée Prate. Prate sought a second opinion from an independent dealer and adviser, then a third from Carmen C. Bambach, curator of Italian and Spanish drawings at the Metropolitan Museum of Art. Both experts attributed the work to
da Vinci
, with Bambach confidently labelling it an “open-and-shut case.” The drawing has been dated between 1482 and 1485 and valued at $15.8 million. The last time an undisputed Da Vinci drawing was discovered was 2000, when Sotheby’s auctioned off a study of Hercules and whirlpools done in chalk and ink.

Archeologists uncovered a cache of Paleolithic-era cave paintings in Spain, some of which could be 14,000 years old. 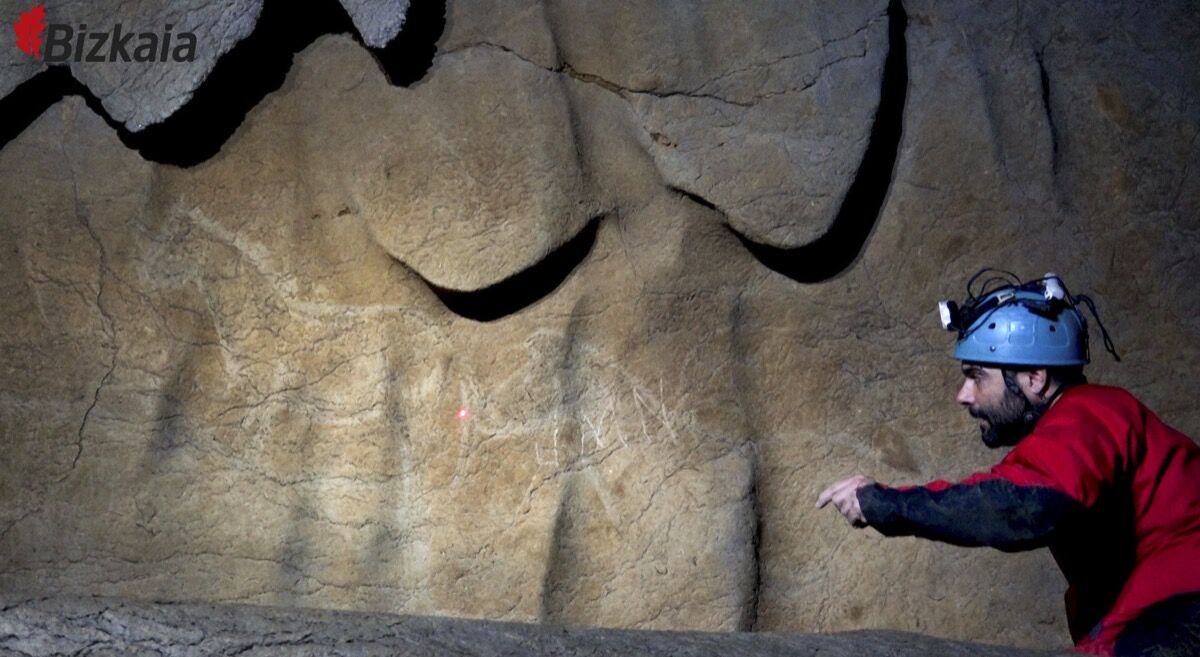 The Atxurra caves, located in the Basque Country in northern Spain, were first identified by researchers in 1929. However, extensive exploration of the site has been hampered by issues of accessibility; the newly discovered drawings were found 1,000 feet underground. This trove of images, notable for the large quantity of figures, comprises some 70 depictions of hunting scenes featuring animals such as deer, goats, and horses. One image shows a bison impaled by 20 spears, ostensibly the record for most spear markings in any European cave painting to date. Although the site is closed to the public, researchers plan to eventually create and distribute 3D versions of the drawings online.
Abigail Cain
Related Stories