The New Zealand Pavilion Uncovers the Art of the NSA 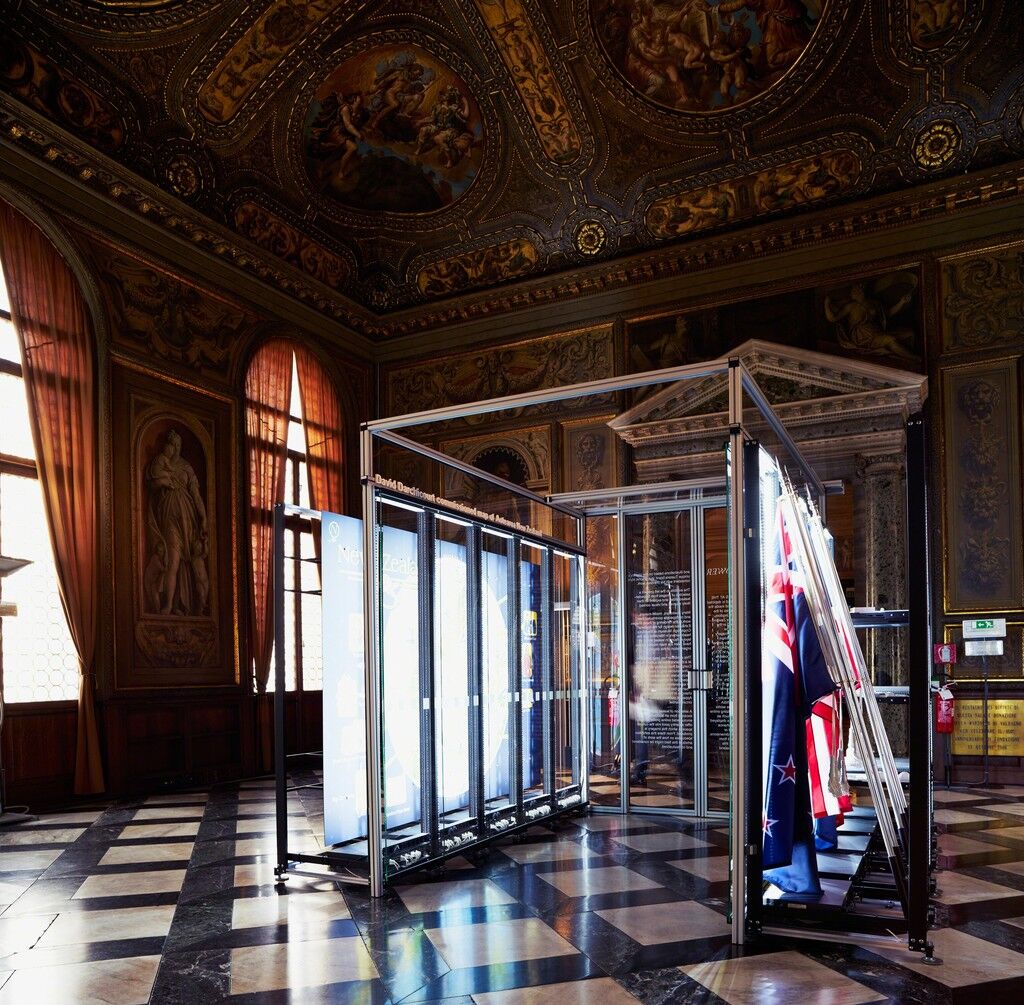 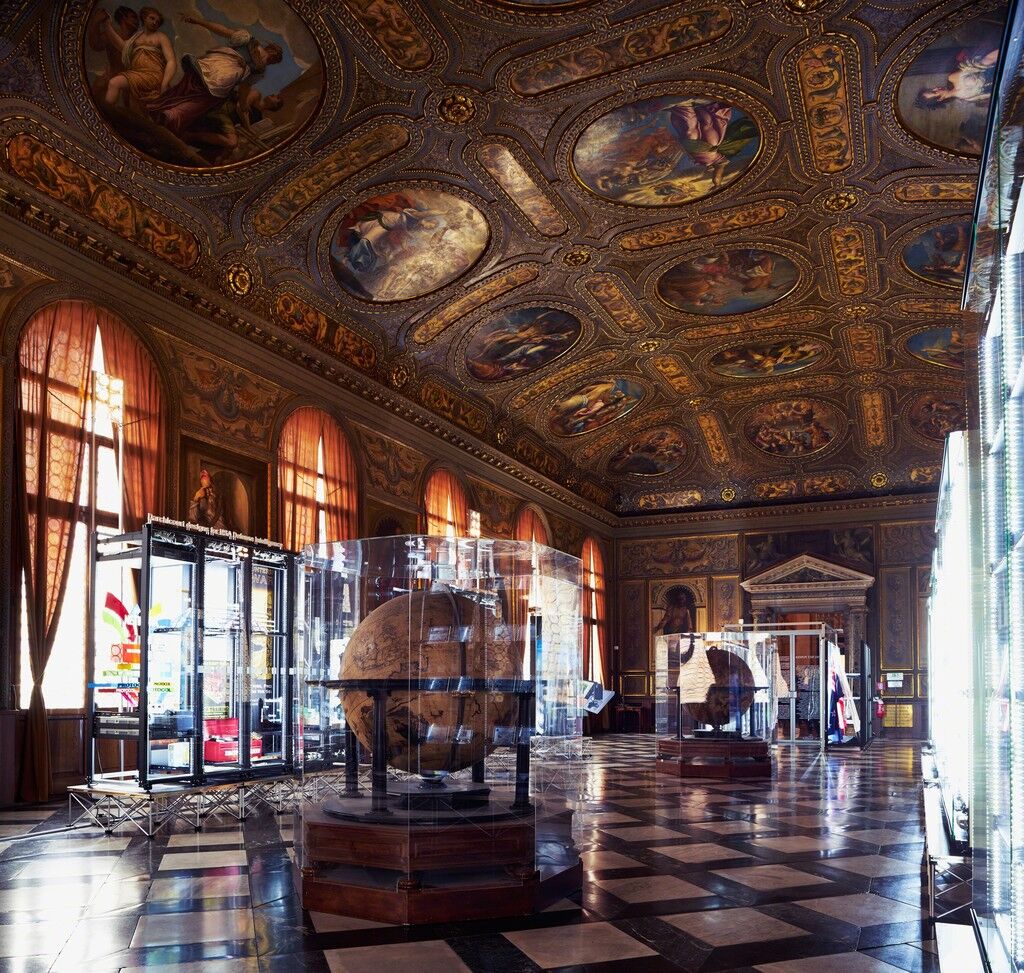 Simon Denny
Secret Power (Installation view), 2015
56th Venice Biennale
Enter
Simon Denny
, who in two concurrent exhibitions (one in Venice and one at New York’s PS1) has examined these forces with a keen eye and an aptly absurdist lens. In “Secret Power” at the Biblioteca Nazionale Marciana, which serves as the New Zealand Pavilion for the 56th Venice Biennale, he presents rows of internet server racks transformed into exhibition vitrines whose contents mine the visual culture of the National Security Agency (NSA) and the “Five Eyes” intelligence alliance—a cohort comprised of the U.S., U.K., Canada, Australia, and New Zealand—revealed in documents leaked by Edward Snowden in 2013. 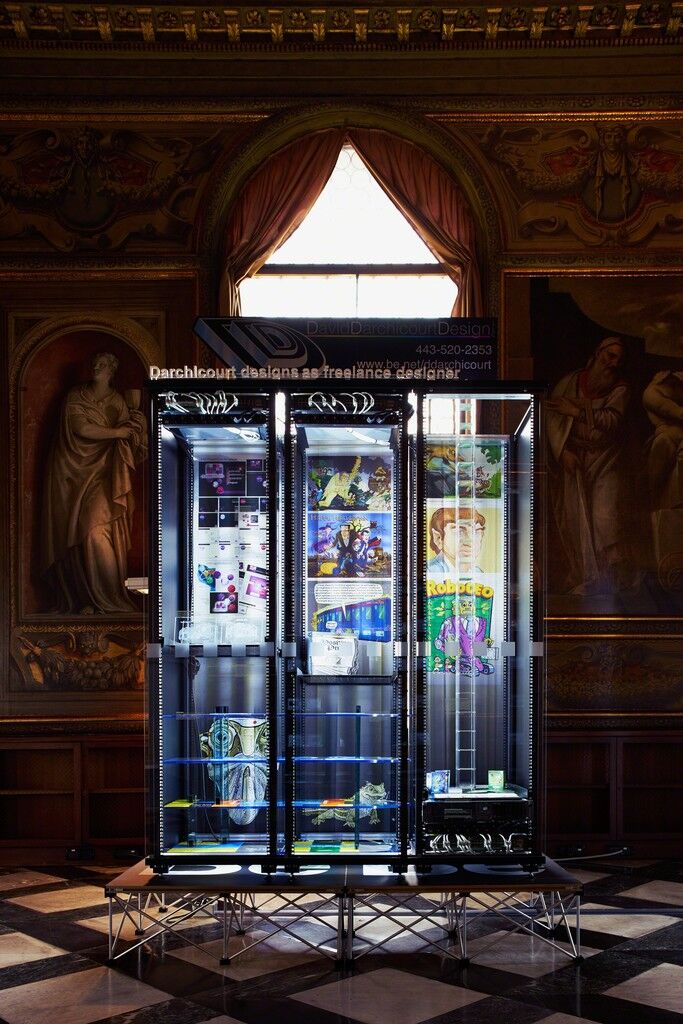 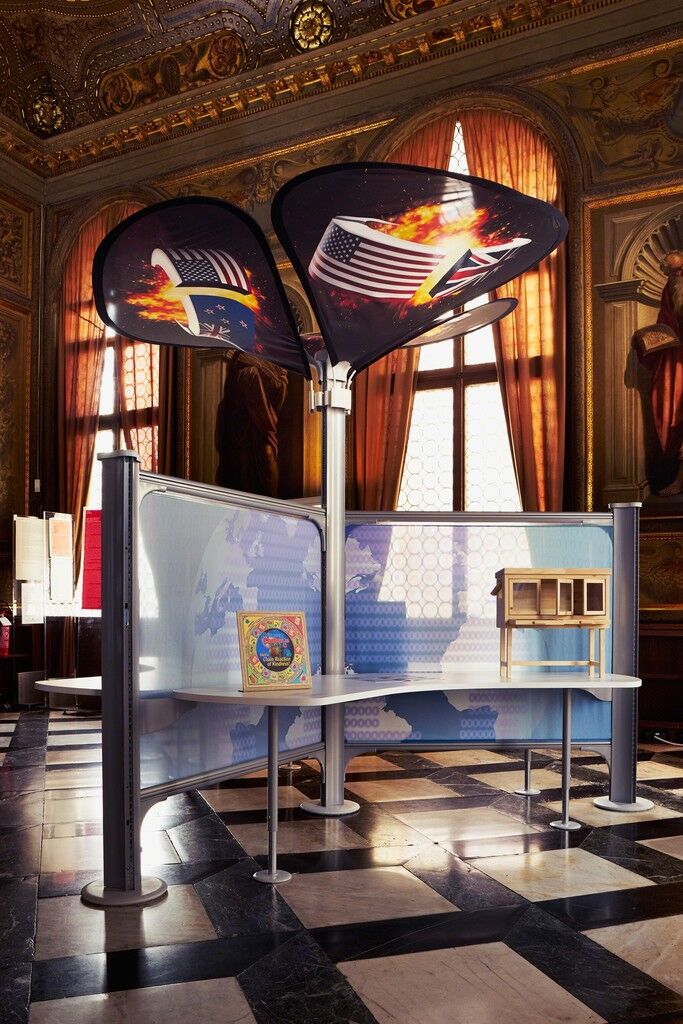 Simon Denny
Secret Power (Installation view), 2015
56th Venice Biennale
Emitting a constant, nefarious hum, Denny’s glass boxes are positioned alongside the library’s extraordinary collection of Renaissance-era maps and globes, underwritten by the then-Venice elite, who sought to consolidate their authority through information about the world’s borders mapped out by adventurers like Marco Polo. Their division of territories is practically unrecognizable to a contemporary eye. Both maps and vitrines (and the vaunted, stately architecture of the library itself) demand the reverence that comes with knowledge and power, and yet at their core, Denny suggests, are abstractions and fantasy.
The contents of the artist’s vitrines center on one David Darchicourt, the agency’s former designer and creative director, who Denny discovered on the professional resume-building site LinkedIn. (That this title exists in an organization mandated to pursue facts may, in itself, warrant a few raised eyebrows.) Upon entering the main room at the Marciana library, visitors are faced with a pair of swinging transparent doors, which recall those at some generic government security checkpoint, through which the flags of the “Five Eyes” are visible. The exhibition’s introductory text, superimposed on the clear doors and thus barely discernible, establishes the slippery visual vocabulary that Denny invokes throughout. 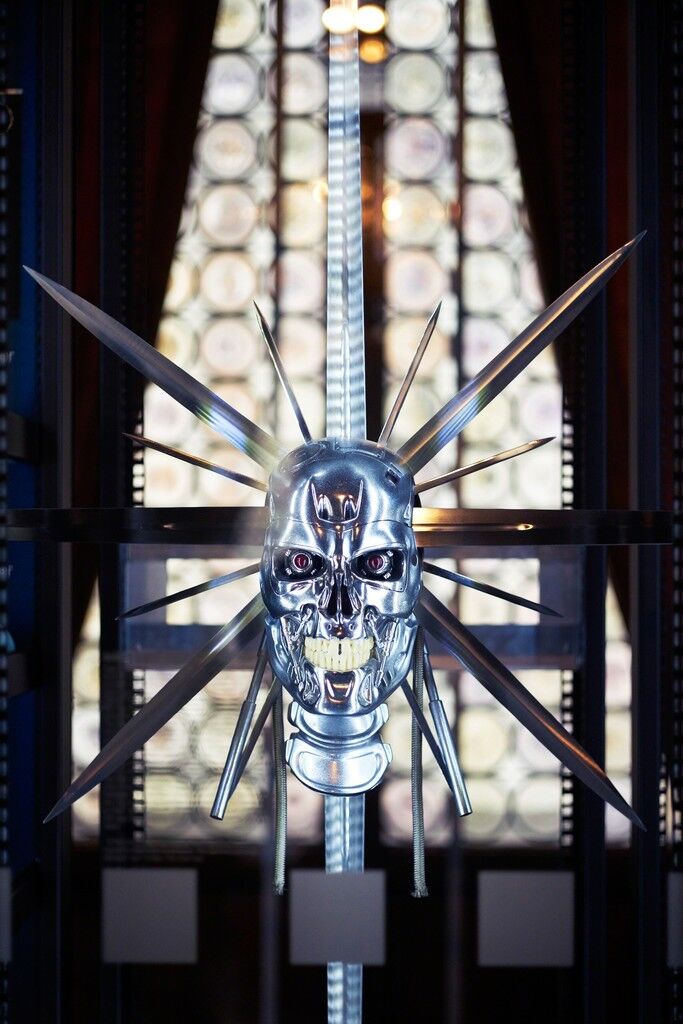 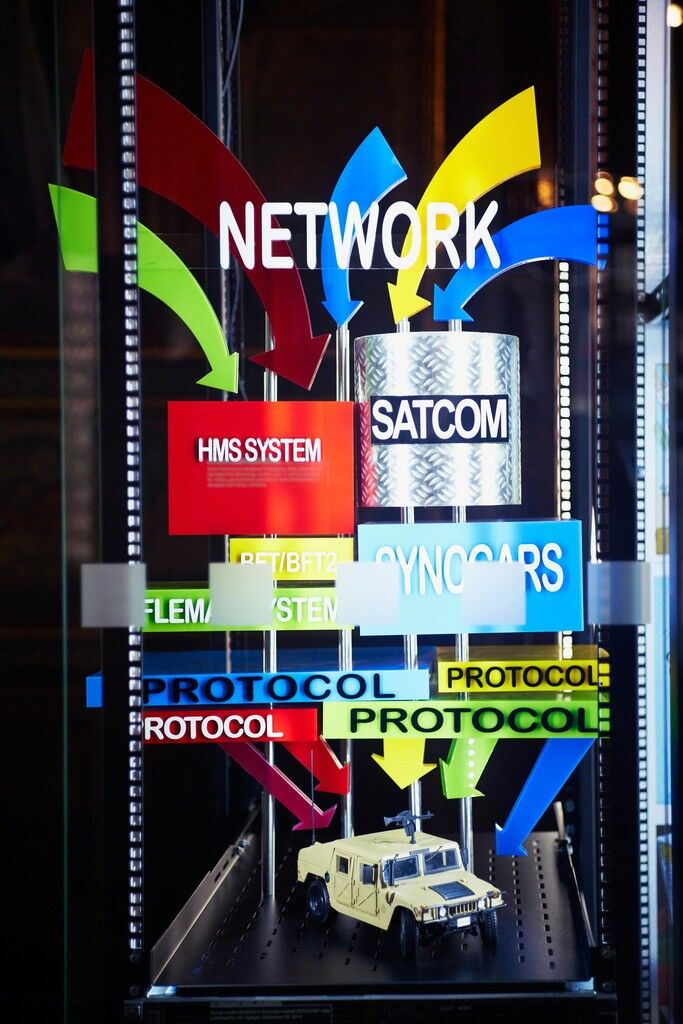 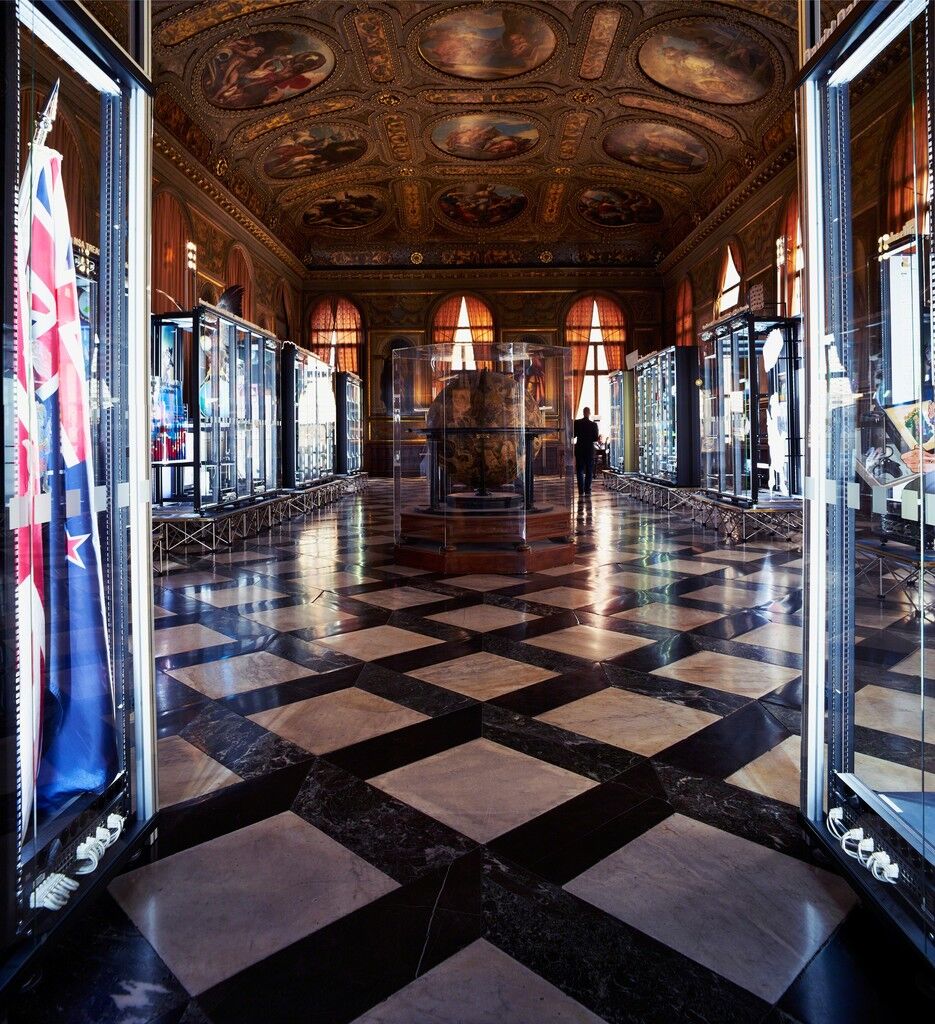 Simon Denny
Secret Power (Installation view), 2015
56th Venice Biennale
Advertisement
Beyond the doors, vitrines are populated with an onslaught of imagery drawn from the NSA’s internal communications, the stuff of PowerPoint presentations and information mapping, which, perhaps not surprisingly, bear striking resemblance to those in Darchicourt’s design portfolio. One explores slides from the NSA’s “Treasuremap,” the nickname for its effort to map the entire internet. At its center, the menacing silver skull of the Terminator is suspended, blades protruding from all sides. This was Treasuremap’s internal logo. Denny’s resounding achievement is to draw a line between fantasy (in the form of sci-fi, cartoons, and gamer culture), shady government operations, and the heady world of Silicon Valley—where corporate ideologies can become loosened from reality. 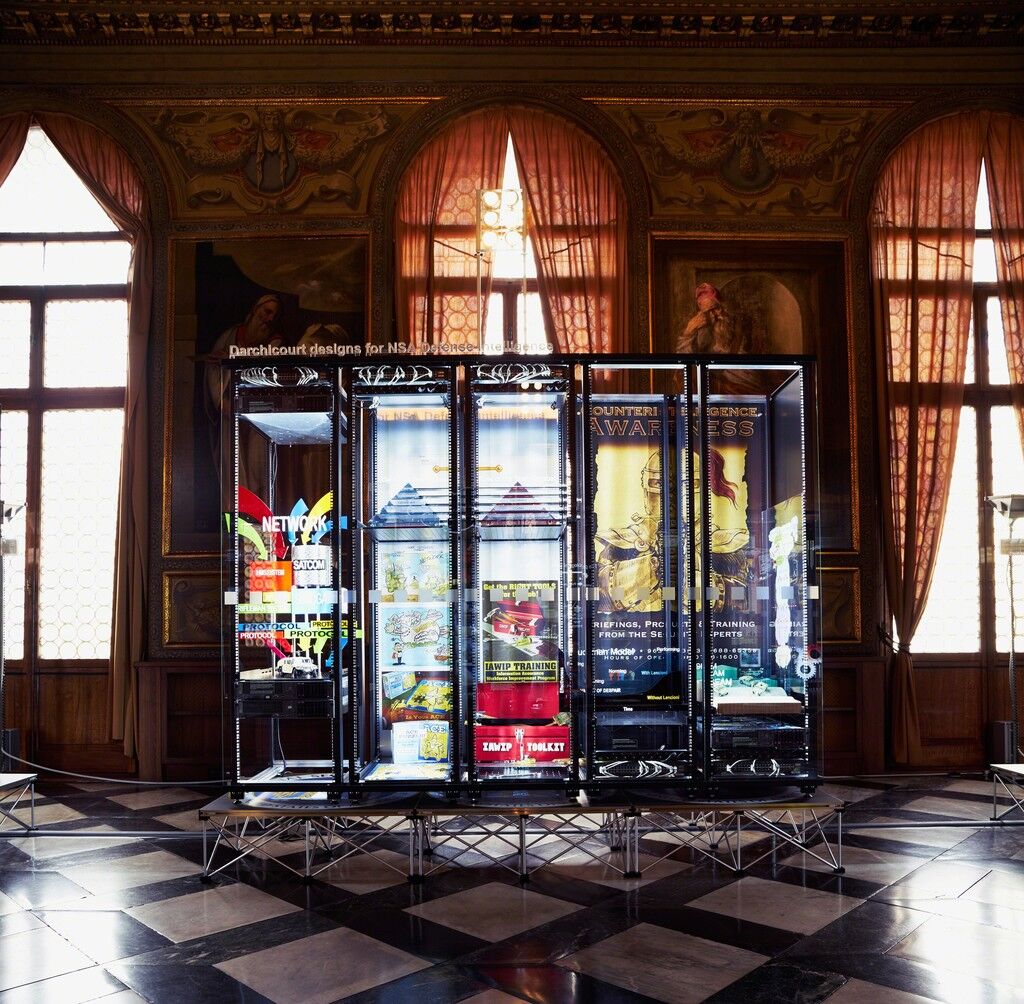 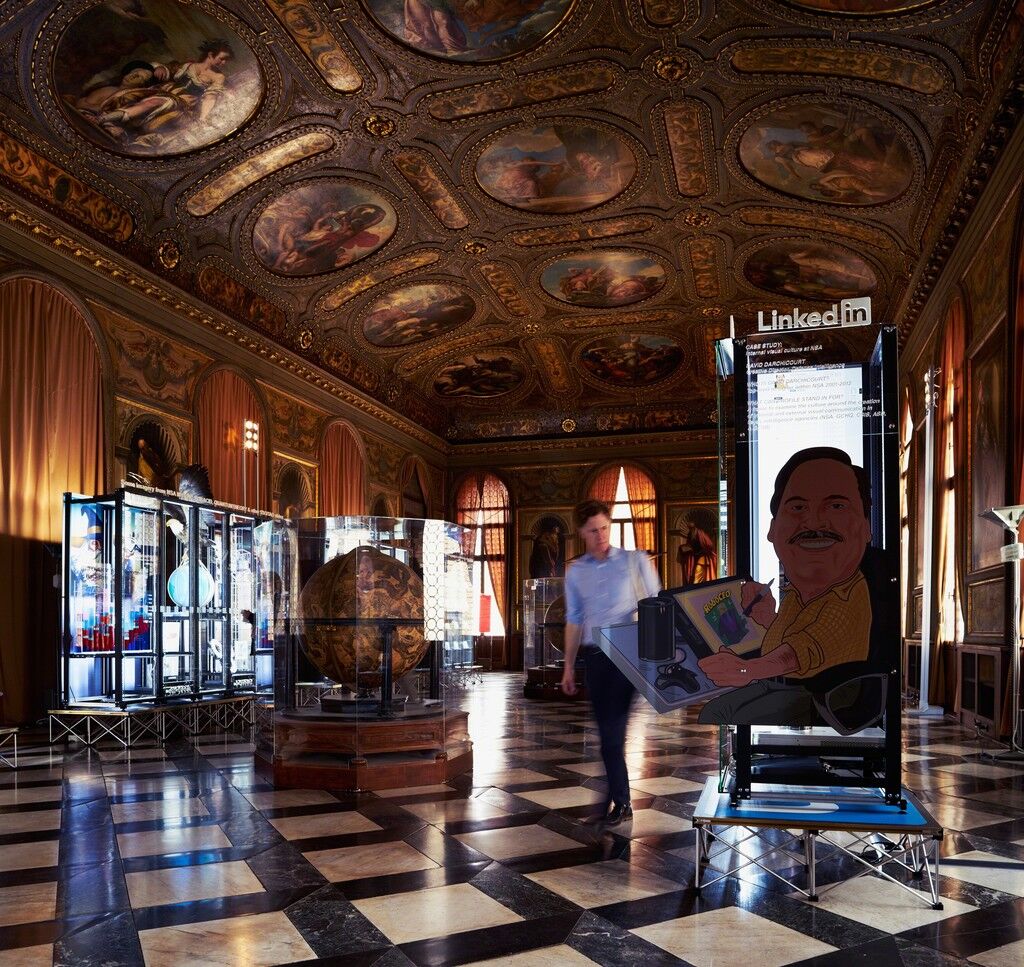 Simon Denny
Secret Power (Installation view), 2015
56th Venice Biennale
In his exhibition at New York’s MoMA PS1, an installation mashup that draws visual references from corporate conferences, trade shows, sci-fi and various corners of internet culture, TED talks, too, come under the artist’s scrutiny. The TED talk, “where the world’s leading thinkers and doers gather to find inspiration,” sprang up alongside Silicon Valley, and is a very particular phenomenon of our current era whose performative element has surfaced in works by
Christian Jankowski
and
Hito Steyerl
. But it’s their visual and linguistic vocabulary that Denny is interested in. At PS1, a glossy platform that depicts a green land mass and blue sea butts up against a backdrop in which corporate buzzwords swirl alluringly amid TEDx logos—change, innovation, think, building. Denny reveals the carefully tuned formula of these exercises in messaging, which have the same benign, pop-like feel (and opiate effect) of the cartoon figures that spell out internal NSA communications.
At stake in all of this are issues of truth and fiction, individual freedom and national power. Not all the activities of those in seats of power—including government spooks, corporate CEOs, even nonprofit directors—should be approached with blanket skepticism, of course. But in the messaging, both internal and external, peddled by these leaders, Denny finds common territory, and plants a powerful seed of doubt.
Tess Thackara
Explore the 56th Venice Biennale on Artsy.
Related Stories