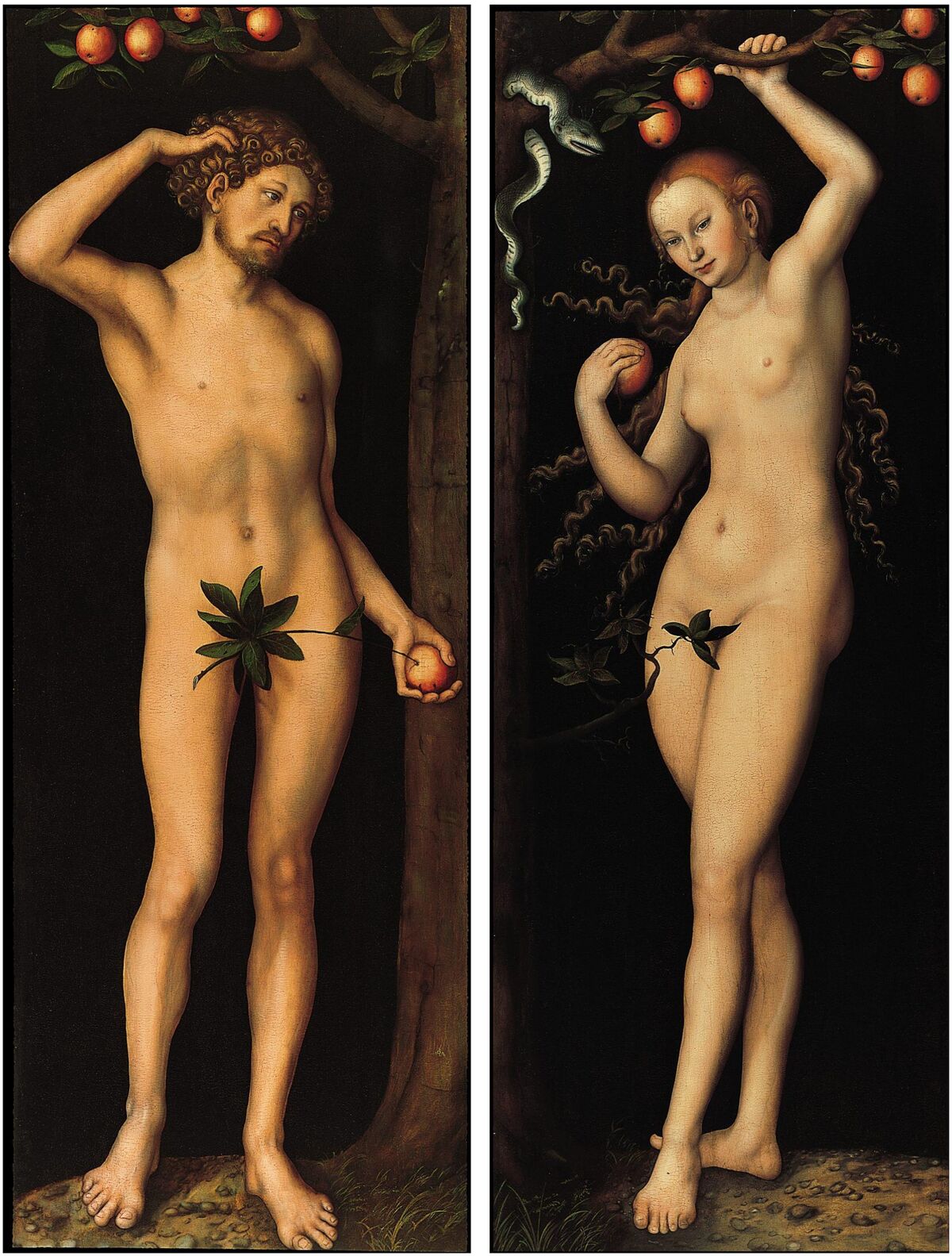 After a series of court rulings over nine years, the lawsuit against the Norton Simon Museum mounted by Marei von Saher, sole surviving heir of the Dutch-Jewish art dealer Jacques Goudstikker, is slated to proceed to trial. The battle centers around claims by von Saher that two
Lucas Cranach the Elder
paintings, stolen by the Nazis during World War II and currently on view at the Norton Simon Museum in Pasadena, California, should be restituted to her. The case against the museum has caught the attention of the art world, not just because of the artwork’s storied past and value (which is in the tens of millions), but because of the case’s complicated and contentious legal history.

Lucas Cranach the Elder painted the two panels in question, Adam and Eve, in 1530. They passed through the hands of many well-known art collectors, eventually ending up in the collection of infamous Nazi leader Hermann Göring. Before that, Dutch art dealer Jacques Goudstikker (father-in-law to the heir bringing the current lawsuit) purchased Adam and Eve from the Soviet Union itself, at a 1931 auction. The historical point would go on to have legal significance: The Norton Simon Museum contends that the Soviet Union had confiscated the paintings from the aristocratic Stroganoff-Scherbatoff family during the 1920s, although that argument is disputed by Goudstikker’s heir and her legal representatives.
Undisputed is the fact that the Nazis eventually forced Goudstikker to sell much of his famous art collection. (Under U.S. law, forced sales are viewed as thefts.) As the Nazis moved towards the Netherlands, Goudstikker fled Europe with his wife and young child in 1940. While on a boat that was taking him and his family to the U.S., Goudstikker fell to his death. After World War II, Goudstikker’s widow and then-heir, Desi Goudstikker, attempted to trace and recover the family’s collection with the assistance of her late husband’s “Blackbook,” which listed his art assets and holdings.
Adam and Eve were recovered when U.S. forces found Göring’s cache of stolen art, following the war’s end in 1945. They subsequently returned the works to the Netherlands. At that time, Allied nations returned works to their countries of origin, which made ownership determinations. Official records show that in 1966 the Netherlands sold the Cranach paintings to the heir of the Russian family, George Stroganoff-Scherbatoff. Eventually he sold the works through a dealer to the Norton Simon Museum in 1971.

Expanding the Statute of Limitations

In Marei von Saher’s legal complaint, filed in May of 2007 in the Federal Court for the Central District of California, she claims that the Cranach paintings should be returned to her. (The sole surviving heir, von Saher married the late Edo Goudstikker, son of Jacques and Desi.) According to the museum, von Saher is time-barred from bringing the suit because the statute of limitations expired decades ago. On the other hand, as the Commission for Art Recovery notes, von Saher alleges “that her claim is timely because of California Code of Civil Procedure §354.3, which extended the limitations period for the recovery of Nazi-looted art in museums and galleries until December 31, 2010.”
Statutes of limitations are enacted to prevent fraudulent and stale claims from arising after evidence has been lost or facts have become blurred due to the passage of time or the defective memory, death, or loss of witnesses. However, this rationale has been scrutinized for Nazi looted art cases. Due to the brutal nature of Nazi pillage of both private and public art collections across Europe, some argue that it is reasonable and fair to extend limitations periods. Furthermore, victims brutalized by the Nazis did not always have access to proper restitution procedures and some faced resistance as they struggled to recover their rightful property.
Ultimately, von Saher was given the opportunity to move forward with her legal case. On April 2, 2015, the U.S. District Court for the Central District of California denied the museum’s motion to dismiss and found that under California law, the clock is reset each time allegedly stolen property changes hands. Von Saher’s claim was timely: Legislation passed by California in 2010 greatly relaxed the usual statute of limitations for those seeking the return of allegedly stolen cultural property held by California museums or art dealers.

Was the Claim Relinquished?

Although von Saher overcame statute of limitations issues, there are major substantive issues to battle at trial, slated for the fall. The Norton Simon Museum has consistently argued that Desi Goudstikker had an opportunity to claim ownership of her property through the Dutch restitution committees. The museum contends that Desi made “a deliberate and well-considered decision in the late 1940s and early 1950s to forgo filing a claim with the Dutch government.” By not filing her claim, Desi voluntarily relinquished her rights to the paintings.
Von Saher paints an entirely different picture, countering that Desi was not afforded a meaningful opportunity to recover her family’s property. Rather, Desi did not lodge a formal claim for Adam and Eve because she feared Dutch authorities would not give her a fair hearing. In fact, in 2006 the Dutch government found that those making Holocaust art-restitution claims were dealing with a restitution procedure that was “generally … legalistic, bureaucratic, cold and even callous”.
Von Saher argues that this bias goes to the heart of the problem. Desi was not given a proper chance to recover her family’s property because of the unfairness in the Dutch recovery procedure during a time when European nations were in financial straits.

Another key issue at hand in the trial is the Act of State Doctrine, which bars U.S. courts from reviewing actions taken by foreign governments. Von Saher asserts that U.S. courts have jurisdiction to rule in this case because the Cranach works were never subject to any internal restitution process in the Netherlands. The Norton Simon Museum claims that when the Netherlands awarded the paintings to the Stroganoff heir, a final determination was made by an official foreign government body, but von Saher argues that the sale was effected in order to avoid potential litigation with Stroganoff, and that no official determination was actually, giving a U.S. court jurisdiction to hear her case as it does not question the validity of a foreign government's exercise of its sovereign authority.
Additionally, von Saher claims that allowing her case to move forward is in accord with policy concerning art restitution. Under the 1998 Washington Conference on Holocaust-Era Art Assets Principles, to which the U.S. is a signatory, efforts should be made for fair and just solutions for the return of Nazi-looted art.
The Norton Simon Museum is firmly arguing against von Saher’s claims, urging the court to determine that the Cranach paintings were subject to restitutions proceedings in the Netherlands, and were rightfully determined to belong to the Stroganoff-Scherbatoff heir. The museum asserts that although the paintings were purchased by Goudstikker in 1931, this purchase was not legitimate as the paintings were stolen by the Soviet Union from the Stroganoff-Scherbatoff family.
This aspect of the case is particularly interesting in light of last week’s news regarding works purportedly stolen by the Soviet Union in Konowaloff v. Yale, 15-921. The U.S. Supreme Court rejected an appeal from a man who sued Yale University for return of
van Gogh
’s The Night Café (1888), claiming it was stolen from his family during the Russian Revolution. What bearing, if any, this ruling will have on the Norton Simon Museum case is yet to be seen, but it is yet another example of the ever-evolving complexities that surround restitution law—which the final ruling on Adam and Eve may impact significantly.
Leila Amineddoleh

A previous version of this article stated that, in 1998, the Dutch government found that those making Holocaust art-restitution claims were dealing with a restitution procedure that was “generally … legalistic, bureaucratic, cold and even callous.” The Dutch government did this in 2006. This previous version also stated that Allied Forces made ownership decisions before returning works to their countries of origin. Allied Forces only returned works to their countries of origin, who then made ownership decisions.
Related Stories