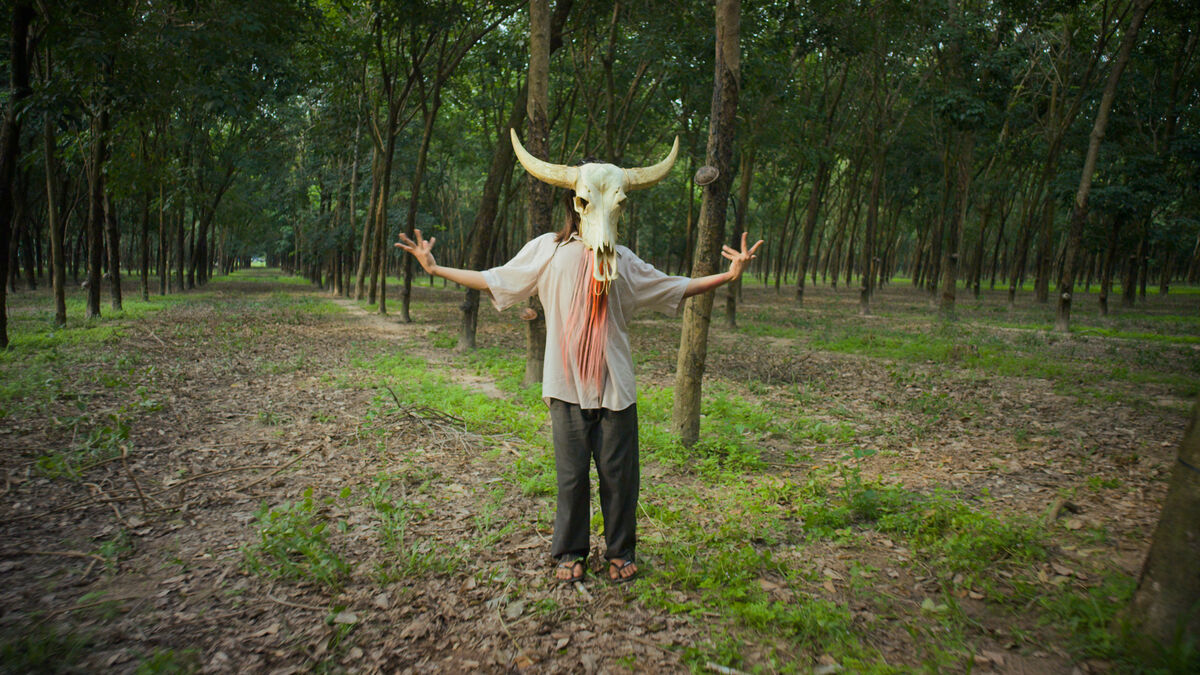 What cultural traditions are shared by South Vietnam and the Louisiana Gulf Coast?
It’s a potentially reductive question in the era of globalization, but the answers suggested by
The Propeller Group
are as poetic as they are provocative. Originally conceived for “Prospect.3: Notes for Now,” the third Prospect New Orleans biennial, the Propeller Group’s film The Living Need Light, The Dead Need Music (2014) tracks an impressionistic path through Vietnamese funerary rituals and traditions, with a brass band soundtrack and second line-style parade that readily call to mind their close New Orleans cognates. The work forms the centerpiece of the collective’s new exhibition at James Cohan’s Grand Street location, their first since joining the gallery’s roster last year.
Formed in 2006, The Propeller Group consists of
Phunam Thuc Ha
,
Tuan Andrew Nguyen
, and Matt Lucero. Artists each in their own right, together they have produced a range of multimedia projects under the guise of their Trans-Pacific collective. The trio are fascinated with the language of advertising, reveling in its slick artificiality yet taking advantage of its latent capacity to reach a wider audience, slipping into cracks that other art cannot reach. New York audiences may remember their brilliant Television Commercial for Communism (2011), produced in collaboration with top international ad agency TBWA\Vietnam and featured in the 2012 New Museum Triennial. While their practice jumps freely between sculpture, public installation, and commercial media, the artists seem most at home in the world of film. This fact may not come as a surprise, considering they also run their own production agency TPG Films. 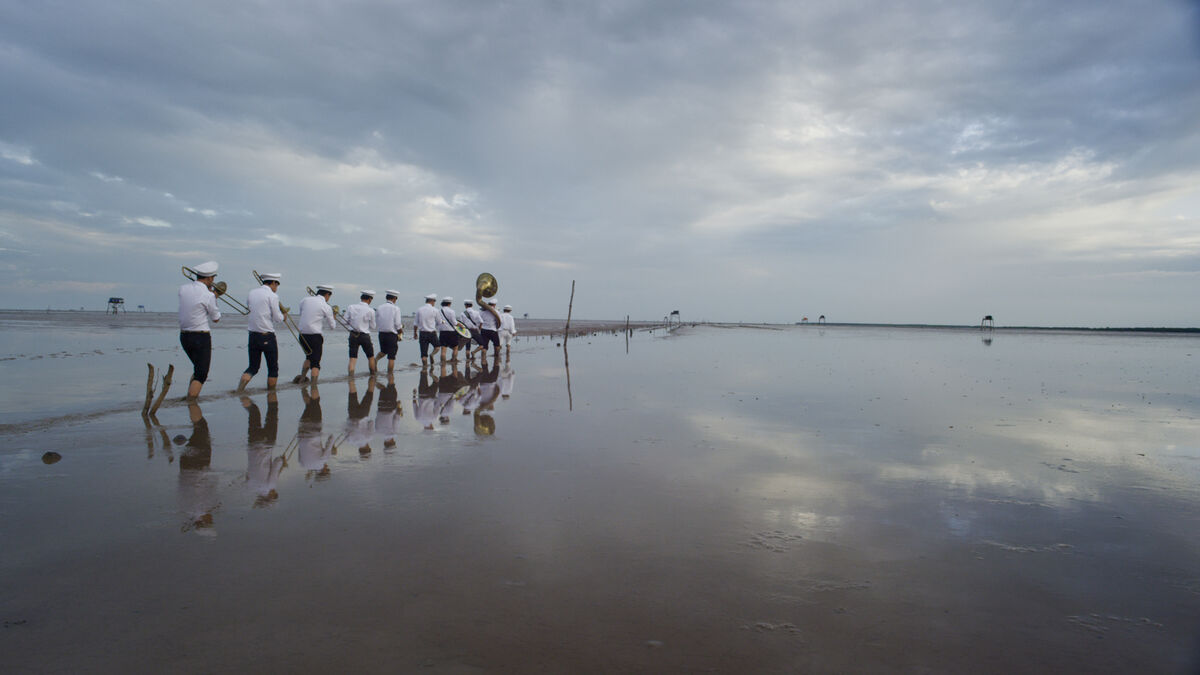 Drawing its title from a Vietnamese proverb, The Living Need Light, The Dead Need Music is a lush 20-minute immersion in the real and imagined rituals surrounding a death in southern Vietnam. The film centers loosely on a young gender-ambiguous teenager who, starting with a deadly encounter in a claustrophobic back alleyway, guides us in parallel through her funeral procession and her double life as a glammed-up street performer. The narrative is deliberately impressionistic, leaving ample room for recurring, mysterious symbols—an ox skull, a snake carved from driftwood—and luxurious shots that track slowly through verdant swamps, forests, and aboveground cemeteries. If that latter description sounds like it could apply to the Louisiana bayou as well, it should.
No matter how beautiful you make it, asking your audience to sit through a 20-minute video in a gallery can be a tall order. The collaborators seem keenly aware of this and set a generous, hypnotic pace intended to ease viewers in slowly, “as opposed to bombarding you, like so much imagery does today,” Lucero says. Key to this effect is the Group’s choice to shoot every scene in the film, from its documentary passages to the staged tableaus, using overcrank—essentially capturing more frames than necessary so that the footage can unfold in slow motion without losing its sparkling, cinematic quality. The effect is such that you are lulled into a state of near-sublime visual pleasure, only then to realize the incipient sadness of what you are watching. 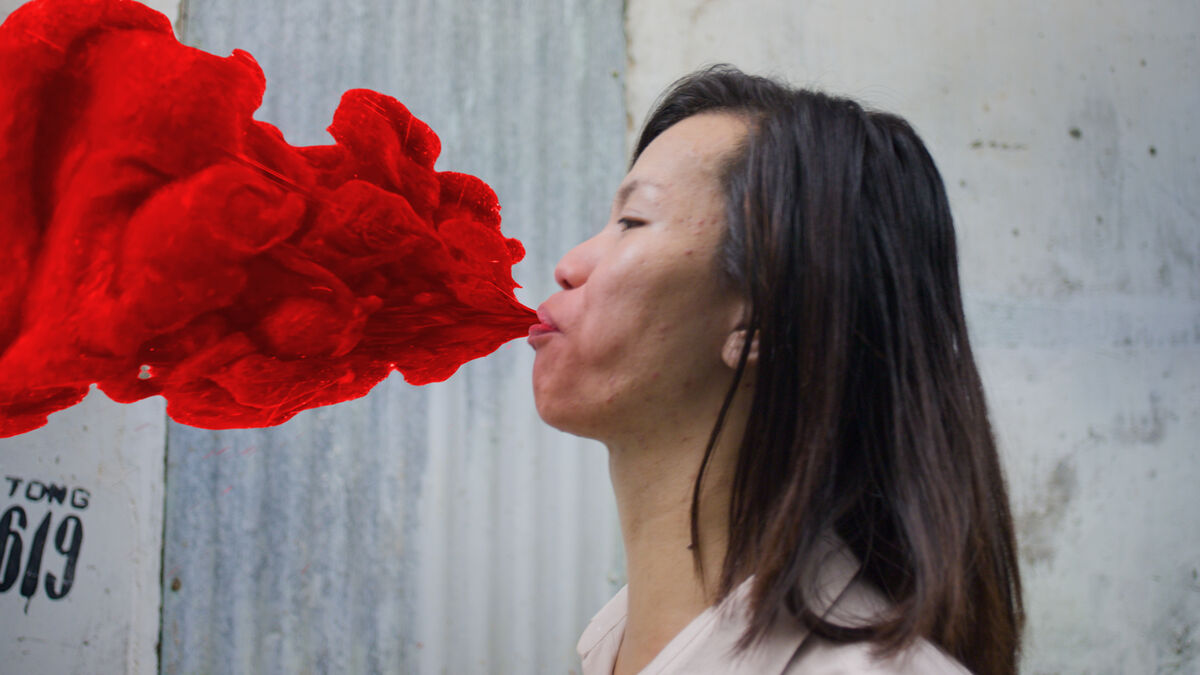 Advertisement
Despite its funerary context, however, The Living Need Light is not exactly somber. Full of dancers and snake charmers, the celebrations that follow death are exquisite and exuberant, and the narrative structure is such that we find beauty, even freedom in death, particularly for our protagonist who cannot inhabit her identity to its fullest in the realm of the living. Moreover, the music of the film forms a strong, emotional backbone to the entire piece; it begins with a Vietnamese song, transitions into sultry jazz, and climaxes with a New Orleans standard, played by a brass band as they process through quicksand in the haunting final segment. “We’re interested in music as the narrative threading the whole thing together,” Lucero explains. The visuals and songs coalesce into a transcendent whole that calls to mind another great wizard of music and video art, Ragnar Kjartansson.
While the film more than holds its own, it would be remiss to skip the second work on display in the James Cohan show, which also makes its New York debut, The AK47 vs The M16 (2015). Originally conceived for the 56th Venice Biennale in collaboration with Grand Arts, Kansas City, the project comprises video and sculpture, which together explore the history of two machine guns, one Soviet- and one American-made, that saw their first wide use in the Vietnam War. The artists created a series of 21 sculptures by firing the guns so that their bullets would collide and mutually destruct, capturing the explosion in a ballistic gelatin specifically designed to mimic the properties of human flesh. Under its vitrine and sealed in resin, the one sculpture on display feels unsettlingly static and mundane given the violence it contains, a tension amplified by the almost annoyingly beautiful slow-motion video of the collision displayed nearby. 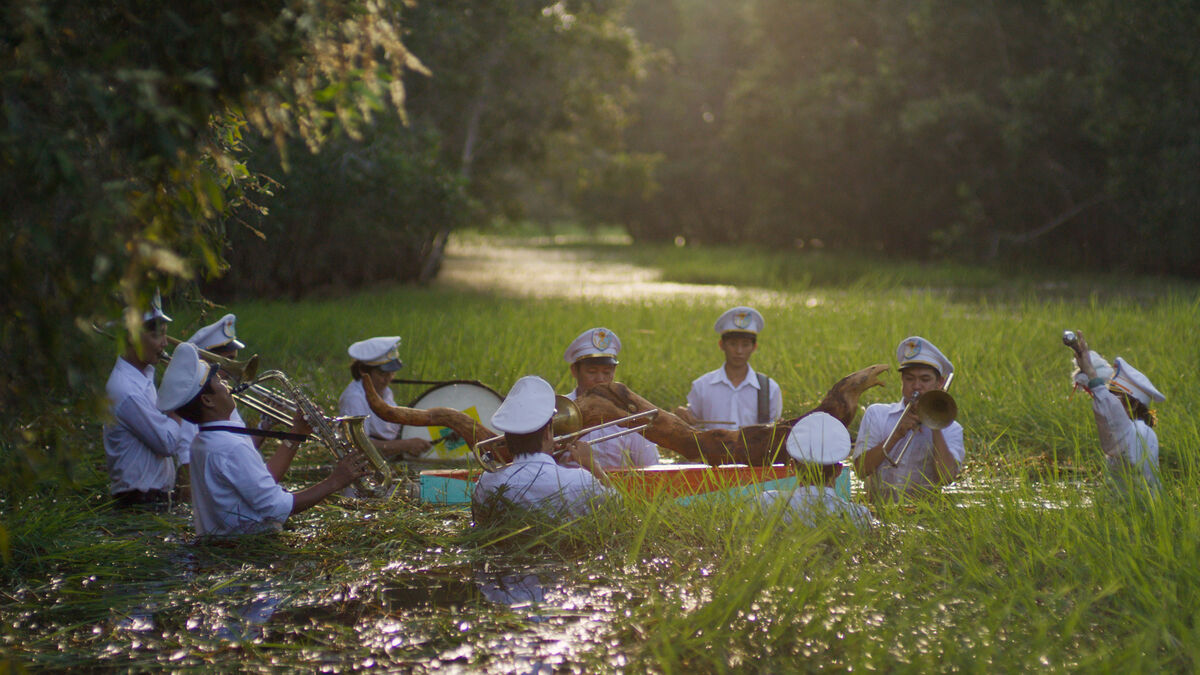 Despite their generally perceived indebtedness to the world of advertising and commercial film, The Propeller Group are anything but cynical, remaining steadfast in their earnest belief that art can reformulate the past into something productive for the future. They refuse to be pigeonholed by medium just as much as they reject an overemphasis on identity politics, instead using their gorgeous work to tease out the ways that joy and suffering are mediated through mass media and experienced throughout the globe. Ultimately, even their most research- and labor-intensive works are left open-ended. It’s up to the viewer to make sense of each work as well as the absurdity of the world they throw into stark relief.
Jared Quinton
“The Propeller Group: The Living Need Light, The Dead Need Music” is on view at James Cohan, 291 Grand Street, New York, Apr. 8–May 15, 2016.
Related Stories