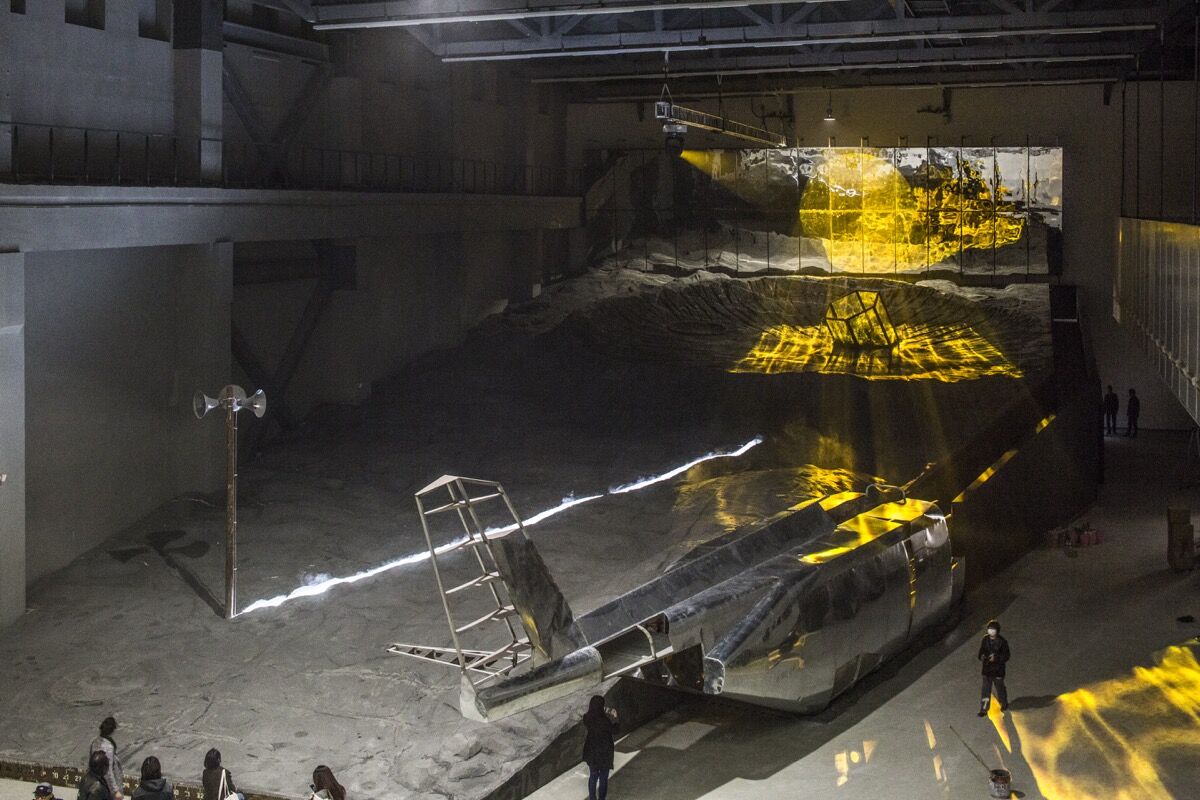 Installation view of MouSen+MSG’s The Great Chain of Being — Planet Trilogy, 2016. Photo courtesy of the Shanghai Biennale.

At Shanghai’s Power Station of Art, the impact of an unknown object has created a vast crater in a barren moonscape. Entering through the fuselage of a ditched communist-era fighter jet, visitors take a winding path into the fearsome bowels of a mysterious planet, picking their way through the detritus and echoes of industry, technology, and civilizations. The darkened walkway culminates at the underside of the mysterious embedded object, revealing itself to be a glass cabinet of curiosities, swarming with thousands upon thousands of bees.
Titled The Great Chain of Being—Planet Trilogy (2016), the dramatic installation is one of more than 100 artworks by 92 artists on show at the just-opened 11th Shanghai Biennale. Devised by acclaimed theater director Mou Sen, The Great Chain of Being—Planet Trilogy houses sound, light, and installation works by more than 40 artists, including students at the China Academy of Art. It makes a fittingly collaborative centrepiece for an exhibition hinged on possibilities; causal relationships and reciprocal forces; and alternative avenues to current economic, political, and social relations.
The biennale, “Why Not Ask Again: Arguments, Counter-arguments, and Stories,” is the creation of Delhi-based artist and curatorial group
Raqs Media Collective
. Its members, Jeebesh Bagchi, Monica Narula, and Shuddhabrata Sengupta, were heavily inspired by Liu Cixin’s cult science-fiction trilogy, most commonly referred to by its first title The Three-Body Problem (2008). Liu’s trilogy draws on the orbital mechanics phenomena of the same name: the difficulty of predicting the gravitational forces created by three masses as opposed to two. It depicts humans’ first contact with extraterrestrials who have moved from the far-away Trisolaran galaxy to Cultural Revolution-era China, and onward to a projected future.

In much the same way, this Shanghai Biennale spans multiple territories—from Shanghai to Ramallah, Dhaka, Lahore, and beyond. Identifiable perspectives range from the kind of curious objectivity Liu’s incoming aliens might take—in
Tao Hui
’s video Talk about body (2013), the artist, disguised as a young Muslim woman, describes his physical self in anthropological terms to an assembled audience—to possibilities spanning both fantasy and reality.
Lin Ke
’s Star Travel (2013), for example, imagines an interstellar journey via Photoshop drawing tools. Continuing the Shanghai Biennale’s space theme is Argentinian artist
Tomás Saraceno
’s Sonic Cosmic Webs (2016). The piece comprises two signature spider webs, one of which is offset by a light projection of a bottomless void. It weaves black hole-like funnels and constructions beyond the capabilities of mankind. What might we learn from these not-so-humble arachnids, the exhibition asks; what worlds and what knowledge are hiding in plain sight?
Other works take a more tangible approach to our current reality. Lines of economic, social, and cultural connection within Asia receive particular attention. Take Belgian artist
Heidi Voet
’s Alibaba and the 40 Thieves (2016). A contemporary cultural translation of folk tales from The Thousand and One Nights describing Ali Baba’s greed and King Solomon’s flying carpet, the wall-mounted installation features an astonishing array of mostly lurid rugs sourced from Jack Ma’s global e-commerce platform, Alibaba. Similarly concerned with creating connections in this most complex of regions is
Zheng Bo
’s interactive Sing for Her (2013–2016), a huge megaphone positioned outside the museum which invites visitors to the Biennale to sing together with migrant workers in Shanghai and Hong Kong, bringing together various disparate groups.
The push and pull of global political and economic forces is a theme explored extensively in “Why Not Ask Again.” Artists and culture more broadly are positioned as a third, unpredictable point of influence and the catalyst for disruption. The ground floor exhibition hall is dominated by
Sun Yuan and Peng Yu
’s installation So Far (2016), a new commission for this year’s Shanghai Biennale. Three enormous pairs of crocks have been hung between forklifts, giving threat to their unknown contents. Alongside, Lee Mingwei’s performance piece Our Labyrinth (2015) sees a dancer gracefully move piles of rice around the space with a broom, pushing the grains into concentric shapes in the most hypnotic of ways.

Advertisement
Up on the second floor,
Wang Gongxin
’s installation work, The Dialogue (1995), focuses viewers’ attention on ripples of causality: Two light bulbs slowly see-saw into and out of a pool of ink, gently touching the surface so that the resulting waves in this dimly lit room are only visible at close range. Taking a more expansive and poetic approach to this idea of interconnectivity and transmission is Stockholm-based American artist
Lisa Tan
’s film Waves (2014–2015). The work takes its title from Virginia Woolf’s novel of the same name and creates a dialogue between Woolf’s prose,
Courbet
’s sea paintings at Frankfurt’s Städel Museum, Google’s data centers cooled by the Baltic Sea, and transoceanic cables. It frames the ocean as an unfathomable, primordial force. Geopolitical links are balanced with familial ones by way of snippets of Skype conversations between the artist and her mother across the Atlantic, establishing tidal forces as both a divider and a connector.
Not all tensions and forces explored in “Why Not Ask Again” are abstract ones. And the most striking point within this purposefully open-ended Shanghai Biennale comes by way of acclaimed Indian artist
Rabin Mondal
’s iconic series “King.” Painted after and during the turmoil and turbulence of India’s 1975–77 Emergency, Mondal’s tormented, emaciated figures speak to the fragility of power and a brutal political force. Peace also has a place in this expansive exhibition, perhaps most poignantly in Kurdish artist
Şener Özmen
’s film work How to Tell of Peace to a Living Dove? (2015). As Özmen himself engages wordlessly with a bird, the artist’s young son narrates, “Frankly, dear white dove, we should have come together before our life not held in quite high esteem regressed into hell, not now!”
Raqs have placed special focus on four artists—Ivana Franke,
Regina José Galindo
, Marjolijn Dijkman, and that landmark MouSen+MSG installation—by dotting four so-called “Terminals” of their works throughout the exhibition. Seven Infra-Curatorial projects present additional perspectives from across Europe, Asia, and Africa. And beyond the Power Station of Art, “51 Personae” offers a selection of projects from beyond the traditional realms of the art world. Furthering this Shanghai Biennale’s remit of exploring possibilities and trajectories, “51 Personae” includes a small exhibition organized by a group of candy wrapper collectors as well as broadcasts by an amateur radio enthusiast. Finally, a program of performative works titled “Theory Opera” explores the intersection of philosophy, art theory, art practice, sound, and movement inside the exhibition space, adding yet more depth to this already rich biennale. 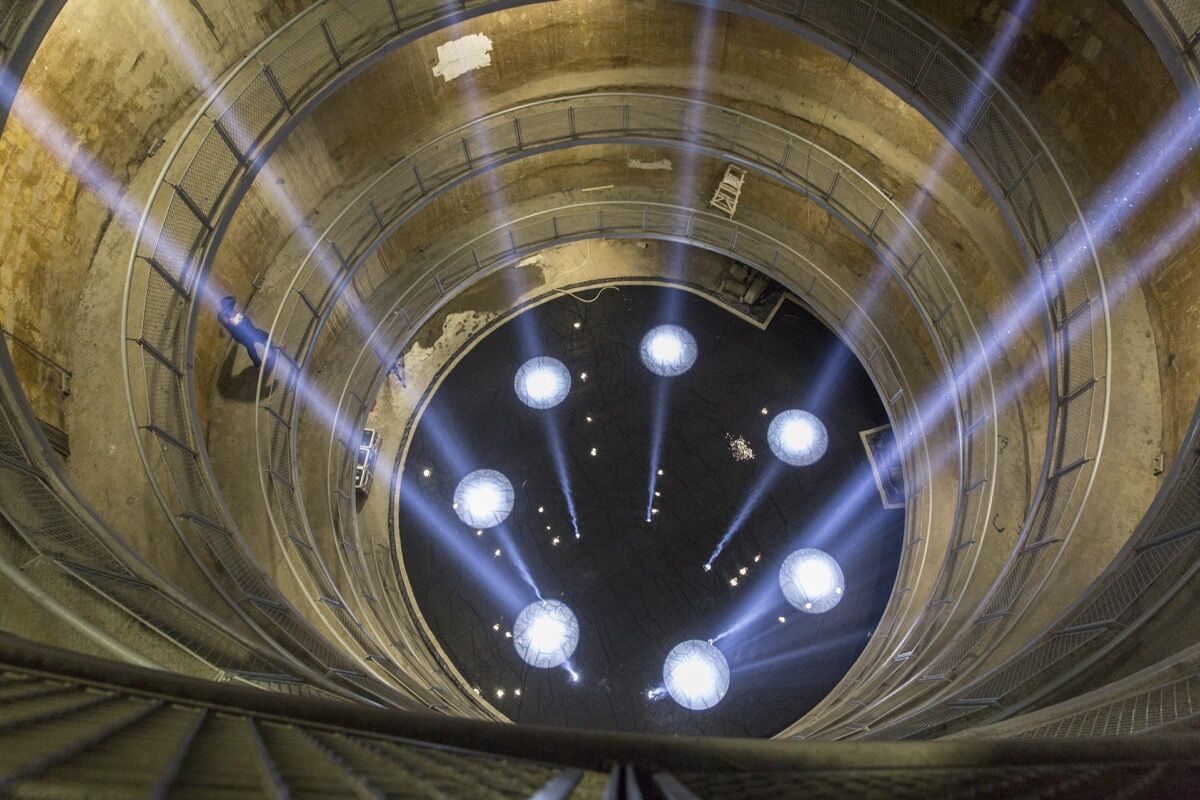 With its strong regional focus, “Why Not Ask Again” continues a palpable trend in Asia for artists and curators to examine the possibilities and realities of exchange within their own region, as opposed to the oft-analyzed dialogue between East and West. The recently opened Singapore Biennale, “An Atlas of Mirrors,” for example, reflects on the ties between Asian countries. In China, the inaugural Yinchuan Biennale is significant for debuting globally significant artists not in the country’s established coastal metropolises, but in the country’s northwest, an important destination on the historical Silk Road that still connects Asia today. In Shanghai, Raqs Media Collective further that enquiry and explore new possibilities for a diverse, complex region that is increasingly cognizant of its own potential as a driving global force, both in the art world and beyond.
Frances Arnold
Related Stories