The Art in the Smithsonian’s New African-American Museum Gives a Powerful, Nuanced Portrait of Black Experience 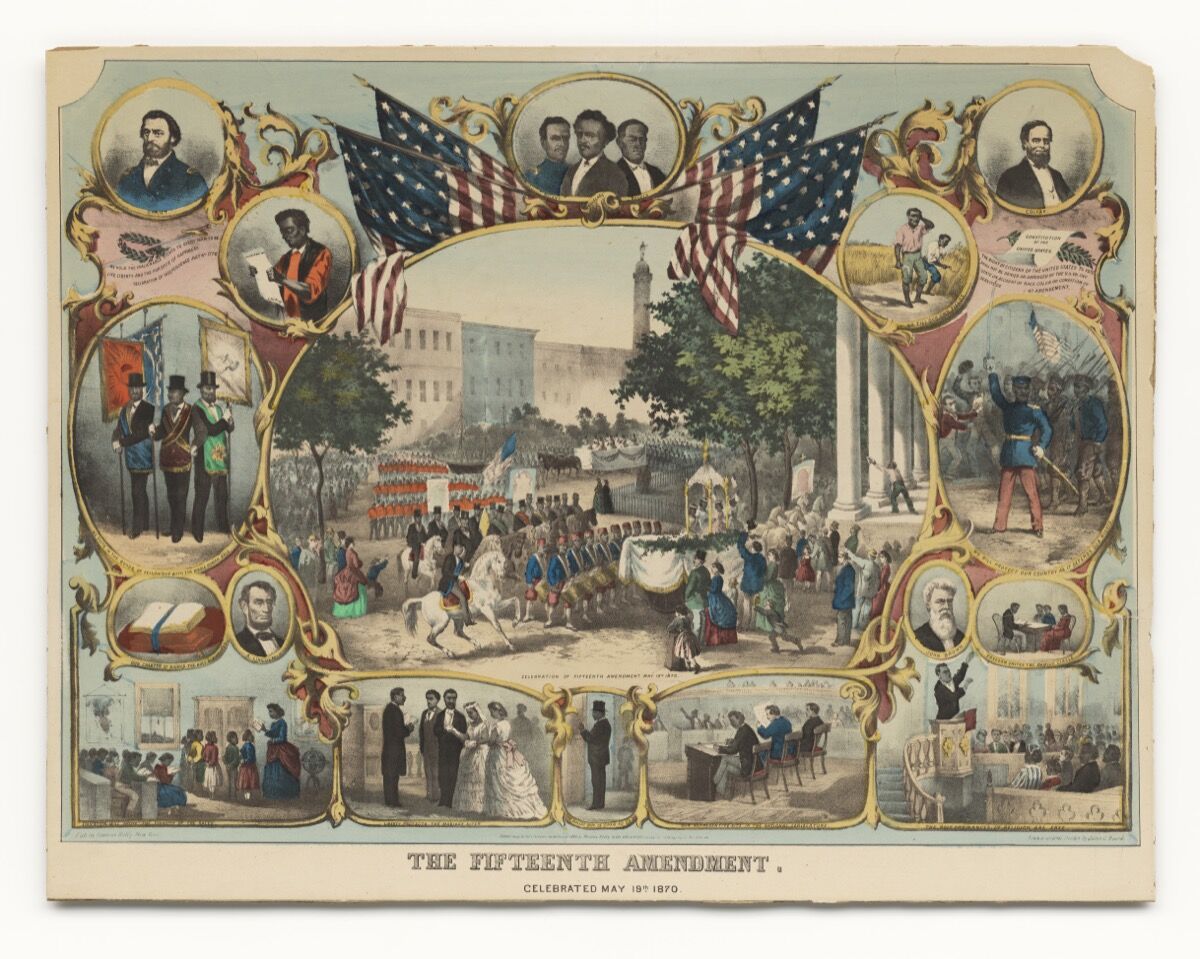 The contemporary artist
Whitfield Lovell
was once wandering around an antiques market in Louisiana when he found a deck of “Sutherland’s Circular Coon Cards” from the late 19th century. The playing cards depicted a series of flamboyantly dressed African-American men with dramatically darkened skin and exaggerated features—caricatures known by the derogatory term “coons.” Lovell bought the cards and used them to create “The Card Series II: The Rounds” (2006-2011), a series that juxtaposes each coon card with a carefully drawn charcoal studio portrait of an anonymous black woman, man, or child who lived between the 1863 “Emancipation Proclamation” and the Civil Rights Movement. Lovell’s 54 portraits can currently be found in the “Visual Arts and the American Experience” exhibition at D.C.’s new National Museum of African American History and Culture (NMAAHC).
The 400,000-square-foot museum, which exists under the auspices of the Smithsonian, will open to the public on Saturday, September 24th. It’s a monumental, bronze-colored, corona-shaped testament to the experience of Black America. Across numerous galleries, it records and institutionalizes a wide breadth of black history, collectively reframing the recherché African-American story as America’s own. Its principal architect, David Adjaye, designed the building to be experienced from the three below-ground galleries (where an exhibition entitled “Slavery and Freedom” is located) up to the four above-ground galleries (the highest of which shows the cultural influence of African Americans). This trajectory is intended to evoke the progress of a people and their country. NMAAHC has all the heft of a national museum, leveraged to display an essential, progressive history. It succeeds in broadly tracing black American life over the course of the last 500 years. 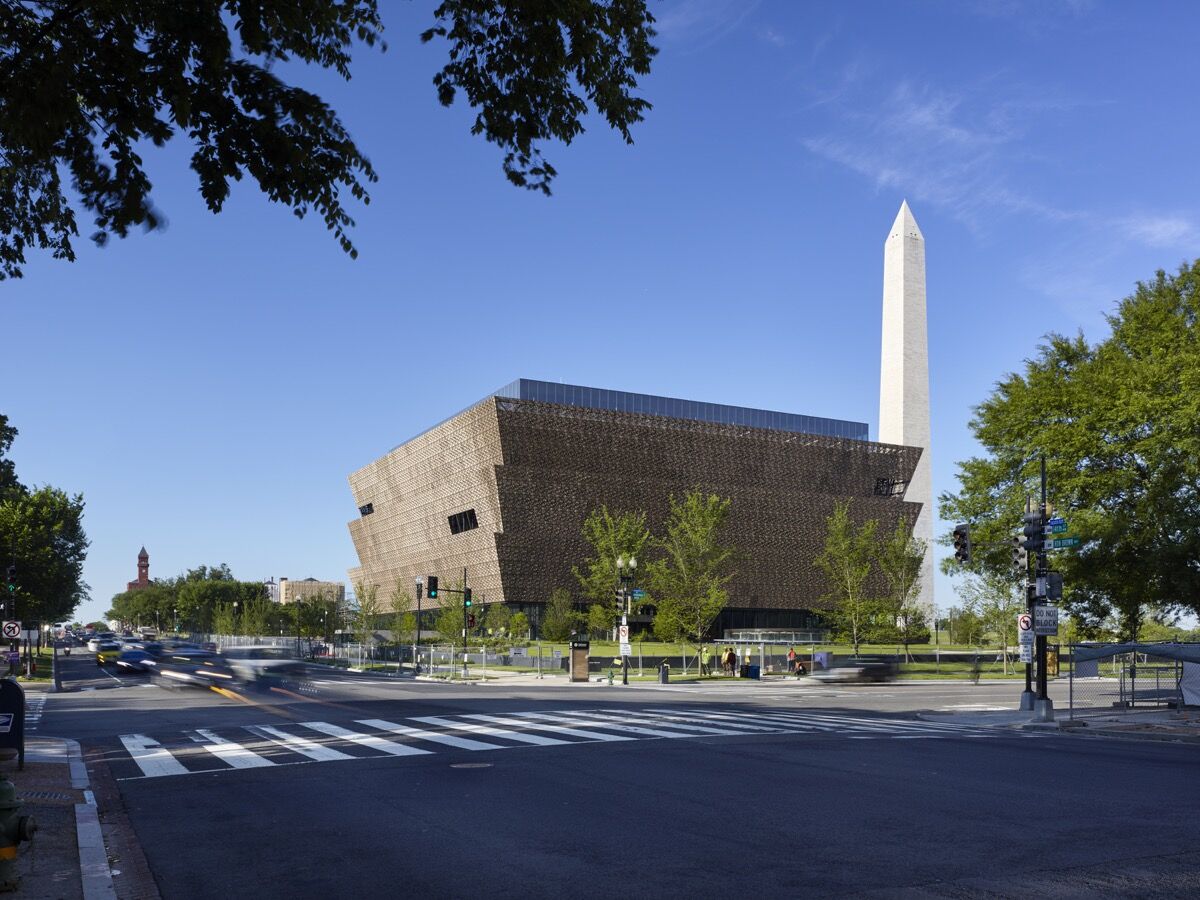 Nestled within the fourth-floor culture galleries, which are dedicated largely to music and fashion, the “visual art galleries” are devoted to fine art. Of the 37,000 artifacts the museum acquired, roughly 350 of them are art objects. NMAAHC’s art collection spans post-colonial to contemporary art, including everything from photography and sculpture to video—though painting and works on paper dominate. The earliest work in the visual art collection, Portrait of John Westwood (1807-1808), depicting a white figure, was painted by
Joshua Johnson
, a self-taught artist who was born a slave. The museum records indicate that Johnson is the earliest documented professional African-American painter. Works of painting and sculpture by
Thomas Kelly
, Henry Louis Stephens,
Thomas Nast
, and Meta Vaux Warrick Fuller also date back to the 19th century and similarly explore themes of religion and freedom.
The collection also features a modest holding of 20th-century art.
Beauford Delaney
’s Untitled (Abstraction) (1964) is a clear highlight. Its expressive swirls of green, red, and yellow are indicative of the painter’s late turn to lyrical abstraction. Thelma Johnson Streat’s Medicine and Transportation (1942–1944)—a WPA mural study depicting African-American contributions to medicine and industry—is also among the museum’s collection. Several modernist paintings directly address the legacy of racism: Archibald John Motley’s The Argument (1940) depicts black subjects as “coons” in an effort to challenge the era’s commonly held stereotypes;
Jacob Lawrence
’s Dixie Café (1948) shows a scene at a segregated restaurant in the American South; and
Romare Bearden
’s A Walk in Paradise Gardens (1955) imagines a time without prejudice.

Advertisement
Some visual artworks in the collection are attributed to unidentified artists. A 1968 plywood panel from a mural at Resurrection City (the protest encampment that formed that year in D.C.), for example, addresses a period when Civil Rights issues were at the forefront of American politics. Painted by an anonymous artist, it shows Martin Luther King, Jr., President Kennedy, and his brother Senator Robert F. Kennedy. The work is among the collection’s poignant reminders that black art, like African-American history, has until recently been assigned little value in the cultural life of this nation.
Most of the 139 artworks in the inaugural exhibition are from NMAAHC’s collection; 16 of them, including
Barkley L. Hendricks
’s photo-realistic portrait New Orleans Niggah (1973), are on loan. On view from the collection is an array of well-known black artists—
Sam Gilliam
,
Rashid Johnson
,
Lorna Simpson
, and
Alma Thomas
—alongside relatively unknown works like Pauline Powell Burns’s Violets (ca. 1890), a textured painting of the heart-shaped flowers.

Modern and contemporary figurative works dominate, and they are often mounted in ways that contest or question the notion of a monolithic black identity.
Kara Walker
’s landscape No World (2010), for instance, is installed below
Betye Saar
’s 1973 mixed-media work Let Me Entertain You. In 1997, Saar faxed one of hundreds of letters to Walker, challenging the artist’s approach to black representation and identity politics. The juxtaposition invokes Saar’s view of Walker’s work as performing black stereotypes.
Several works on view speak to the forgotten influences of black artists and collectives in contemporary art.
Edward Clark
’s abstract expressionist tondo The Big Egg (1968) establishes the artist among the earliest American painters to experiment with oval forms (later explored by artists like Jasper Johns), while works by the 1970s black artist collective AfriCOBRA—who operated loosely as the visual arts arm of the Black Arts Movement, and whose influence can be found in the work of
Kerry James Marshall
and
David Hammons
—are given prominence. One highlight of the AfriCOBRA works is
Wadsworth Aikens Jarrell
’s multi-color painting Revolutionary (1972), depicting the former Black Panther Angela Davis.

One of the stated curatorial goals of the museum’s art curators, Jacquelyn D. Serwer and Tuliza Fleming, is “to replace the moniker ‘African-American art’ with the more appropriate designation of American art.” At times, while wandering the art galleries, one may find this curatorial preference clashing with the concerns and context of the art on the museum’s walls. There is something profound and urgent in understanding the differences that have long separated the motivations of black artists from others in the canon—especially given the recent killings of unarmed black Americans, which have led many in the black community to wonder how much has really changed. It’s crucial that this context isn’t lost in the museum’s efforts. Its presentation of art, like its detailing of history, should privilege the black voice.
—Antwaun Sargent
Related Stories