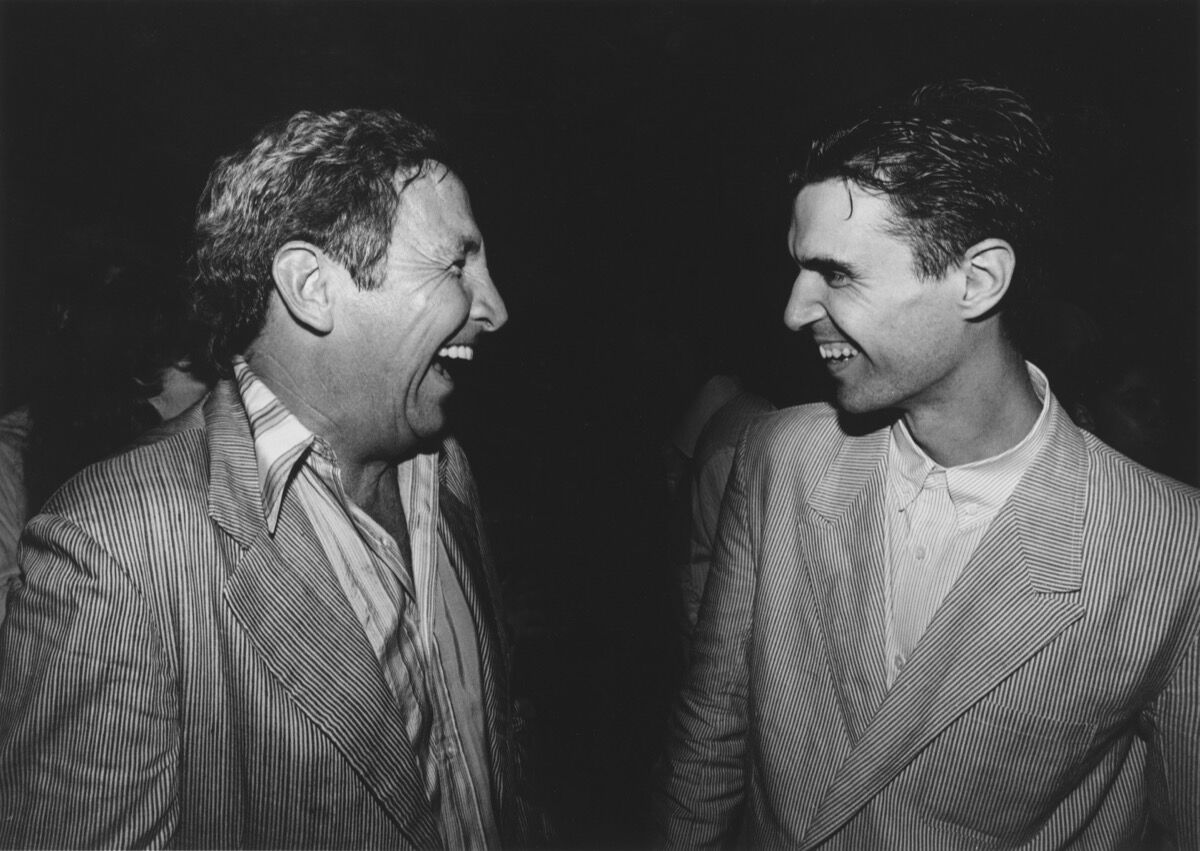 From the very start,
Robert Rauschenberg
’s career was intertwined with music. At Black Mountain College in 1952, the young artist struck up a friendship with avant garde composer
John Cage
. Rauschenberg’s White Paintings (1951) served as inspiration for Cage’s most noted composition: four minutes and 33 seconds of silence, aptly titled 4’33” (1952). During his early years in New York, Rauschenberg spent time with a group of musicians that included Cage, Morton Feldman, and Earle Brown. “I felt very natural with them,” he said, unlike with the
Abstract Expressionist
painters who were “difficult for me to talk to.”
Decades later, as an established artist in his own right, Rauschenberg would collaborate with another notable musician—David Byrne, lead singer and guitarist of the Talking Heads. Byrne had stumbled upon the American artist’s black-and-white silkscreen paintings during a visit to Leo Castelli’s West Broadway gallery in the 1980s. Struck by his fusion of
found imagery
and abstract brushstrokes, the musician began to wonder what Rauschenberg could do with an album cover.
Bryne soon found out. Rauschenberg readily agreed to take on the design of the band’s fifth studio album, Speaking in Tongues. As Byrne wrote in the New York Times, he was “pleasantly surprised” that the artist “eschewed simply reproducing a work on the album jacket in favor of re-envisioning what the whole LP package could be.” The final product is connected to a series of sculptures Rauschenberg completed in 1967, says David White, senior curator at the Robert Rauschenberg Foundation. Titled “Revolver,” these sculptural works were composed of five circular Plexiglass discs,
silkscreen printed
and lined up in a metal cradle. When the viewer flipped switches on the control box, small motors embedded in the base would rotate the discs and allow the viewer to determine the composition. 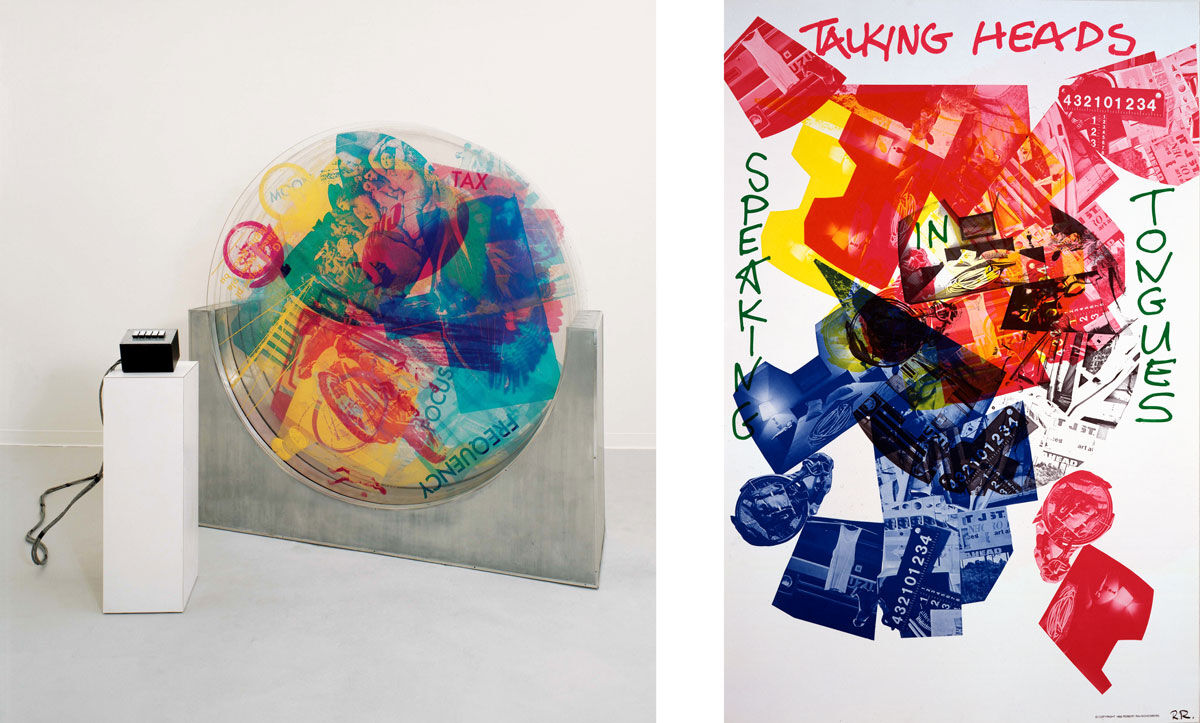 For Speaking in Tongues, Rauschenberg referenced the three-color printing process by creating separate layers of cyan, magenta, and yellow. Each disc sported a collage of images, including a wrecked car, a highway billboard, and a suburban bedroom, that could be spun to produce different effects. “In this case,” Byrne noted, “one could never see all the full-color images at the same time, as Bob had perversely scrambled the separations.”
It wasn’t easy to find a suitable place to package the record. In fact, guitarist and keyboardist Jerry Harrison spent six months in the early 1980s searching for a business that could vacu-form a clear vinyl LP. The band eventually employed the services of an Oscar Meyer hot dog packaging company. This arduous production process may have contributed to the album’s lengthy release period—although the Talking Heads’ previous four albums had been released over four consecutive years, it was another three years before Speaking in Tongues hit the stands.
Due to production difficulties, the Rauschenberg-designed cover was printed in a limited-edition run of 50,000. (Byrne himself designed an alternate cover for the remaining million or so album sleeves, a pared-down, abstract painting in blue and yellow.) Fans could own a Rauschenberg of their own for just $12.98; super-fans could pay $100 for one of the 1,000 deluxe editions signed by both Byrne and Rauschenberg and sold through art galleries.
Andy Warhol
himself purchased the album at Tower Records in the East Village in 1983. His diary entry from July 11th of that year mentions that Rauschenberg “was upset because he only got $2,000” for the job: “And I told him he was right, he should’ve gotten $25,000.” 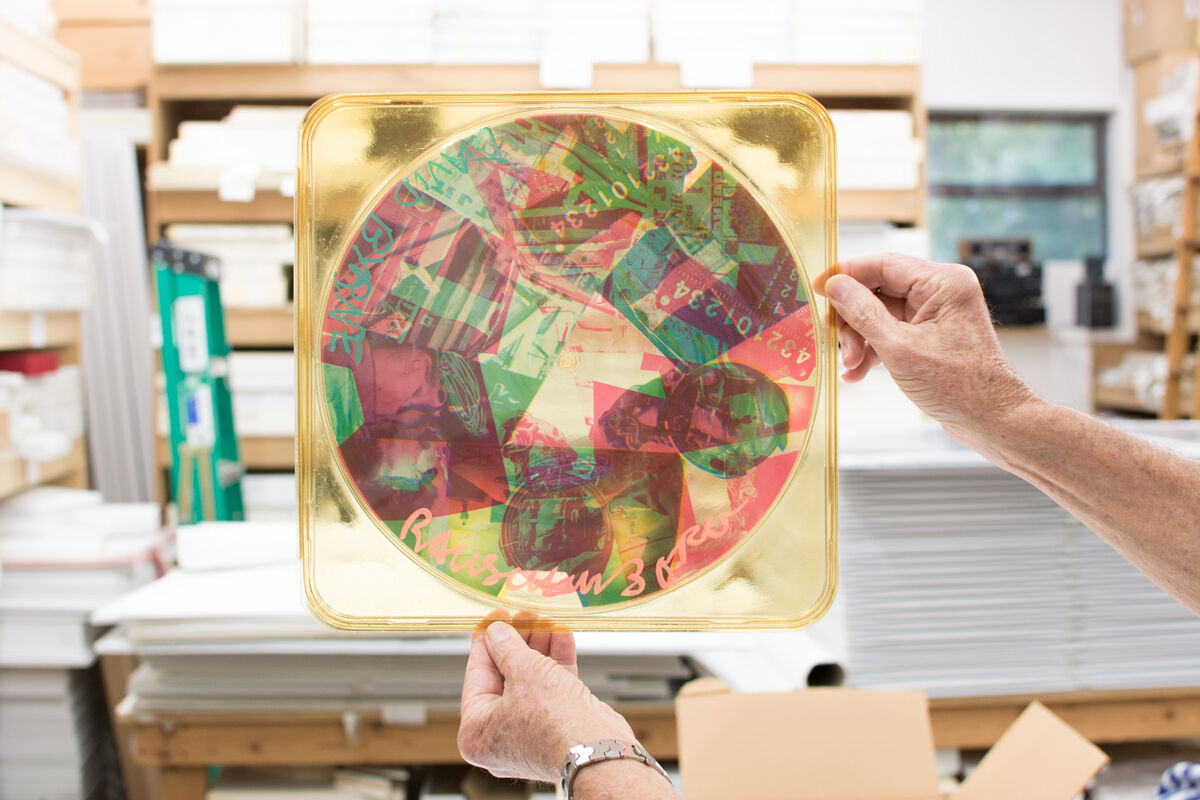 A copy of the original Rauschenberg-designed Speaking in Tongues album cover, signed by David Byrne and the artist himself. Photo: Abigail Cain

Advertisement
Rauschenberg went on to win a Grammy Award for his design, one of two the Talking Heads would rack up for their album art. The band never received a Grammy for their music, however. For the genre-bending Talking Heads—whose music was a mixture of funk, pop, and worldbeat that defied easy categorization—Rauschenberg’s work may have been the perfect visual complement. Both music and album art gathered together disparate sources to produce a certain harmony.
As for what music the artist liked himself? If you got right down to it, “he was very much a T.V. person,” the Rauschenberg Foundation’s White says. “I think that was obviously for visual stimulation.” While the artist enjoyed Erik Satie and even collected musical scores, it was the television that played from the minute he woke up until the moment he fell asleep. “When I was around him, there was not so much, ‘Oh, let’s put on some music,’” White recalled, “because the T.V. was always on.”
Abigail Cain
Related Stories