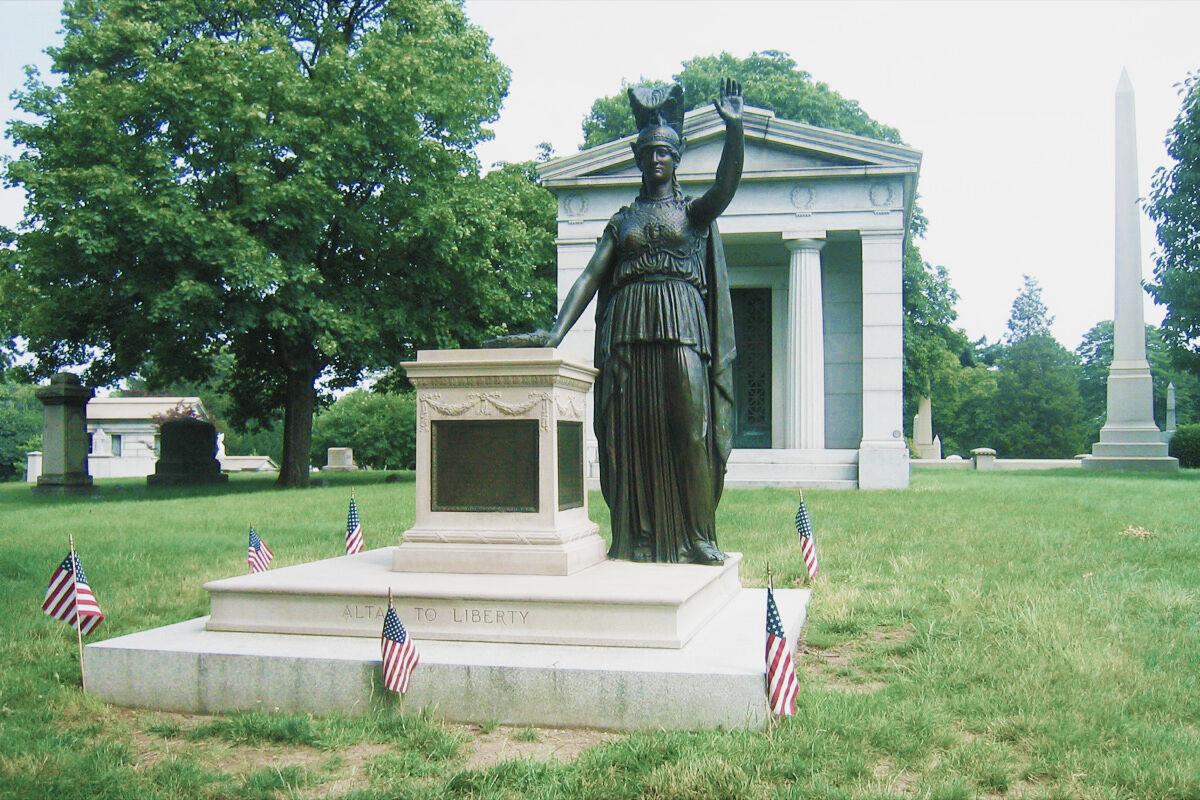 A statue of a strong, fearless woman—the Roman goddess of arts and war, Minerva—stands at Brooklyn’s highest point. She wears armor decorated with snakes and a helmet that puts Julius Caesar’s to shame. But perhaps her most compelling characteristic is the angle of her gaze. Her eyes lock with that of another legendary woman, the Statue of Liberty, who stands tall some three and a half miles away in New York Harbor. The two sculptures have a special relationship—one that is currently in danger of being broken.
“I don’t know of another relationship like this that exists between two sculptures,” explains Jeff Richman, the resident historian at Green-Wood Cemetery in Brooklyn’s Sunset Park, where Minerva is located. “But it’s not just the connection between their eyes and their gestures that makes it unique. It’s also the interaction between two historic statues—who also happen to be women—commemorating two incredibly important historical moments.”
The Statue of Liberty, as many of us know, was a gift from France to the United States. Erected in 1886, it was unveiled with fanfare to commemorate the 100th anniversary of U.S. emancipation from British rule in 1776. Since then, she’s become one of the most symbolically powerful statues the world has ever seen, inextricably linked with the country’s pledge of “liberty and justice for all.” The 151-foot-tall copper figure has also been a galvanizing emblem for immigrants the world over—a piece of art that symbolizes democracy and served to welcome those who arrived in the U.S. through New York’s Ellis Island, as they entered a new home they heard was filled with opportunities that had eluded them elsewhere.
When Charles Higgins, an Irish immigrant turned prominent Brooklyn businessman, conceived of Minerva, he had Lady Liberty—and a statue’s power to bring awareness to history—in mind. At the time, in the early 1900s, Higgins lived not far from Brooklyn’s Battle Hill, the land on which the Battle of Brooklyn—the first and biggest Revolutionary War battle after the signing of the Declaration of Independence—took place in 1776.
But according to Higgins, this historic tract (then, and still, owned by the sprawling Green-Wood Cemetery, where the likes of inventor Samuel Morse, composer Leonard Bernstein, and painter
Jean-Michel Basquiat
rest) wasn’t getting the recognition it deserved. “Higgins was an Irish-American and immigrant who took tremendous pride in the American story, and he was kind of depressed that the people in Brooklyn didn’t share his enthusiasm for preserving battlefield land and the story of this pivotal historical event,” Richman says. “He ultimately got fed up with the lack of support he was getting for the cause, so he took matters into his own hands.”
It was then that Higgins decided to purchase 10 plots of Green-Wood’s most coveted real estate: the highest point in Brooklyn and the site of one of the most important moments in New York history. There, he’d forge his family mausoleum and, more importantly, honor the site’s past with a statue that would not only commemorate the battle, but also connect it to its more prominent sister, the Statue of Liberty. 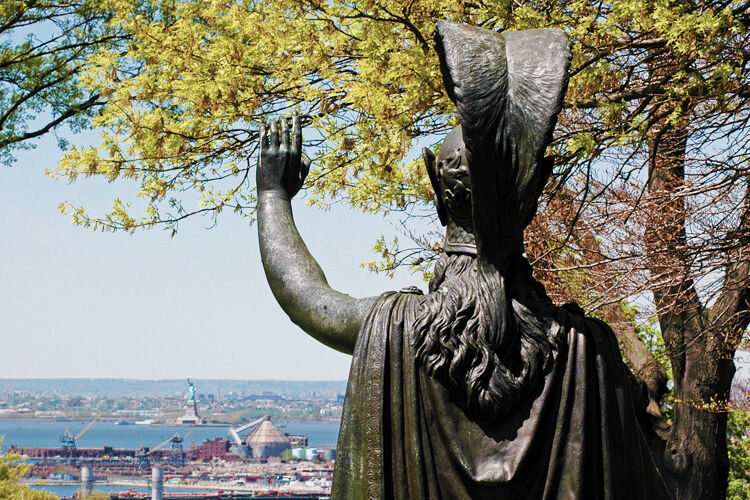 Minerva was sculpted by Frederick Wellington Ruckstull, a prominent artist in the late 19th and early 20th century (his work can also be seen across the country and in the halls of the Met). She was finally unveiled in 1920, with Higgins presiding over a ceremony that brought together other prominent men like Franklin Delano Roosevelt, then the assistant secretary of the Navy, and Al Smith, governor of New York State who would later run for president as well. “It was obviously an important event,” explains Richman. “All these powerful men celebrating this relationship between two strong female figures: the Statue of Liberty, with her right arm upraised and, according to Higgins, saluting Battle Hill, and then Minerva, with her left arm upraised, saluting back to the Statue of Liberty. It was and still is a dynamic relationship.”
But, over the years, awareness of the relationship between the two sculptures has waned. And, in step with Brooklyn real estate boom, so has respect for the line of sight that preserves their tacit rapport. “We became involved in an effort in 2005 to preserve that view, and we’ve made constant efforts since to try to get that view protected,” Richman says of Green-Wood’s ongoing attempts to defend Higgins’s original intention for the sculpture and, in turn, the full impact of Minerva’s message.
Preservation attempts were threatened when developers began focusing on Brooklyn’s South Slope, Sunset Park, and Red Hook neighborhoods as territory ripe for development. In 2005, Green-Wood’s bid became urgent when a lot on the corner of 23rd Street and 7th Avenue (land that was ironically once owned by Higgins and envisioned by the patron as a public lookout point, an idea that was quashed by his death) became the site for a planned building that would obstruct Minerva and Lady Liberty’s locked gaze. Luckily, after much public outcry from the community and a three-year battle with developers, the historical view was preserved.
That said, Green-Wood is still in the throes of legally assuring the relationship between the two sculptures, in turn preserving it for posterity. While the city did sign an “197a” plan in 2008, which “force[s] the city to consider the community’s wishes if a developer threatens the view plane,” the motion is not legally binding. “It’s an ongoing battle,” Richman says. “And now there’s the issue with Red Hook. You can see Ikea off in the distance, and potentially someone could build higher and block the view. That’s still not settled.”
In an era when arts funding is being cut and real estate investors wield tremendous power, the preservation of a gaze between sculptures of two powerful women—both symbolizing the democracy and freedom on which this country was founded—takes on new, urgent significance.
—Alexxa Gotthardt
Related Stories