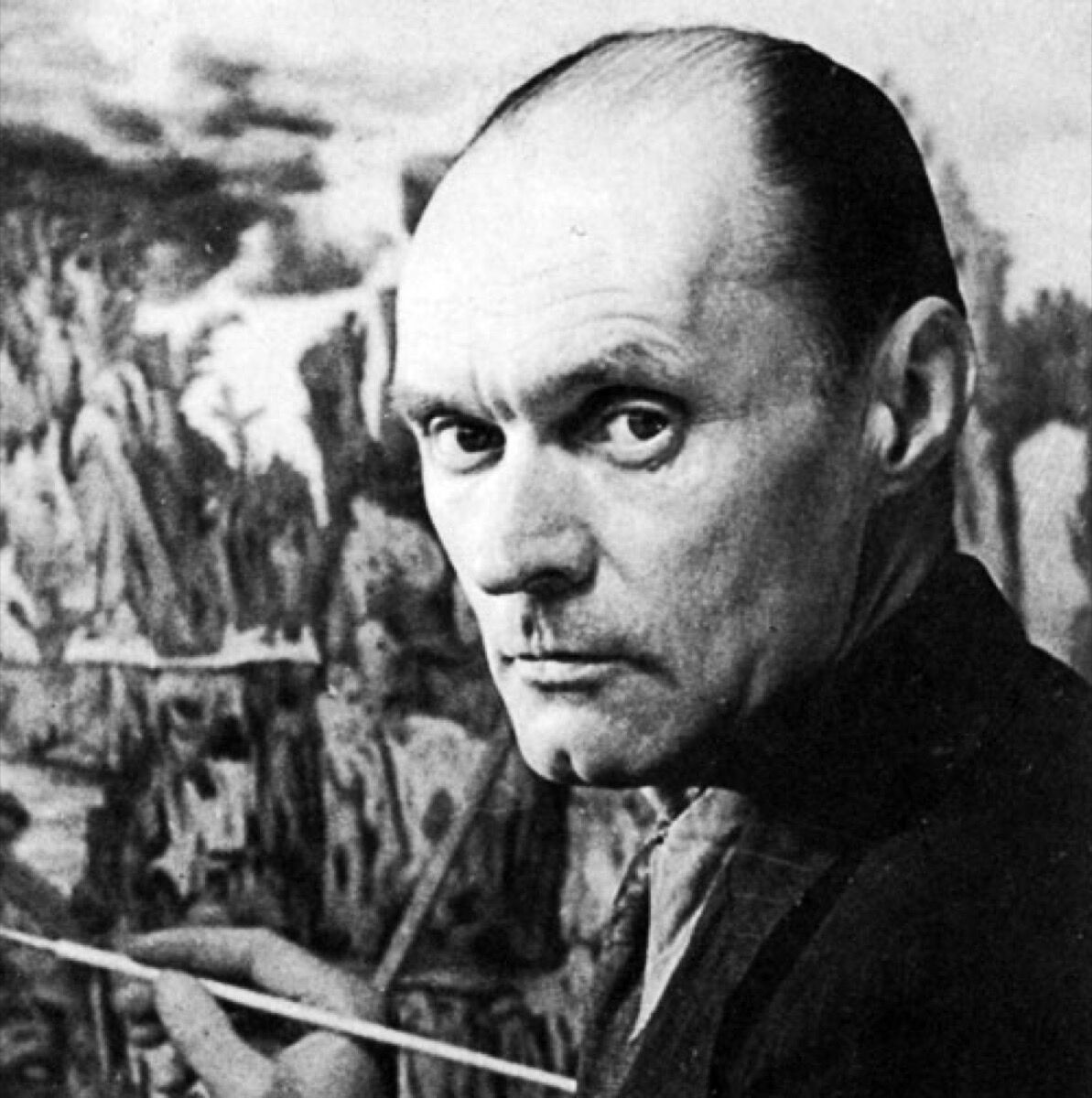 Most will recognize the names of his associates:
Salvador Dalí
,
Max Ernst
,
André Breton
. As for Richard Oelze himself, memory of the German Surrealist has faded.
Certainly, the artist never cultivated his legacy—quite the opposite, in fact. Oelze is thought to have destroyed something like two-thirds of his oeuvre; surviving early works by the painter are now few and far between. While he ran in high-profile social circles, few knew him well. Oelze was a reluctant socializer to begin with, and following stints in World Wars I and II, he became even more reclusive. For 20 years, he lived alone in an undertaker’s storage room in Weserbergland, a small town in northern Germany. As the German art critic and historian Will Grohmann once observed, “The silent
[Paul] Klee
was talkative compared to Oelze.”
Oelze had actually studied with Klee, privately, during his time at the Weimar Bauhaus in the 1920s. Born in 1900 in Magdeburg, Germany, the young painter also trained with
Walter Gropius
and
László Moholy-Nagy
. But it wasn’t until 1929, when he stumbled across the work of Ernst and
René Magritte
in a Belgian magazine, that he found his place. “That’s the first time I encountered the term ‘
surrealism
.’ I felt an instant connection,” Oelze said in an interview toward the end of his life. “My painting style didn’t need to change. It was just a confirmation that let me believe in myself a little more.”

Oelze’s work eventually made its way into numerous prominent Surrealist exhibitions: “Fantastic Art, Dada & Surrealism” at MoMA in 1936,
Marcel Duchamp
’s “First Papers of Surrealism” in 1942 in New York, and in Germany at documenta II and III in 1959 and 1964, respectively. He moved to Paris for a time, where he was scouted by New York gallerist Julien Levy and, later, visited by MoMA director Alfred H. Barr Jr. In a catalog essay written decades later, Barr remembered those moments in the German painter’s studio in 1936: “I had been much interested in Surrealism since 1927 and for weeks we had been immersed in Surrealist art but we had seen nothing quite as disturbing as Oelze’s paintings.”
The museum then acquired one work, a drawing inspired by a character from a Kafka novel, and another in 1940. The second work, a painting titled Expectations (1936), is now Oelze’s most famous. It depicts a well-dressed crowd facing away from the viewer, gazing onto an empty but ominous horizon. Mina Loy, Levy’s Parisian representative, who became romantically involved with Oelze, wrote: “Whenever I’m in a room with it, I catch myself looking at that sky—waiting for something to appear.” 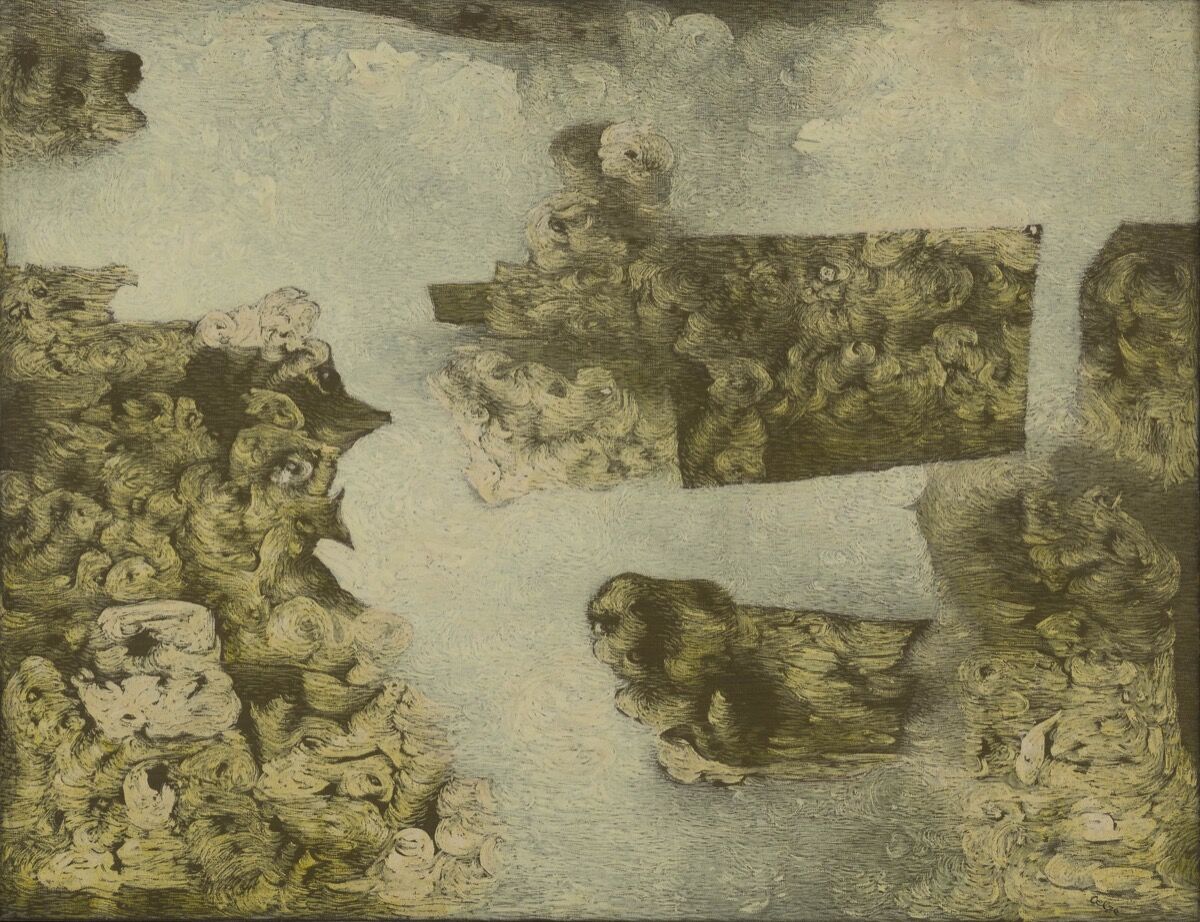 Advertisement
These career successes took place as Oelze traveled extensively across Europe. But in 1940, he was ensnared by World War II and drafted into the German army, where he served as both a map draughtsman and ground support for the Luftwaffe. He was later held by American soldiers as a prisoner of war until his release in 1945. It took several more years for Oelze to return to his artistic practice, which had been deeply affected by his wartime experience. In these post-1950 paintings, figures grow out of and collapse into each other, composed as they are of matter that exists somewhere between the animal, vegetable, and mineral. Most are in tones of sepia and gray, with shapes emerging and receding from billowing fog. Simultaneously bleak and lush, these works are the subject of an ongoing solo show at Michael Werner Gallery in London, which opens in New York on January 19th.
Oelze died shortly before his 80th birthday, painting until he was too weak to hold the brush. The Surrealist remained a recluse for the remainder of his life. “I’ve withdrawn into my own world,” he once said. “Painting is completely free from the bitter life experiences I went through in both wars. I don’t want to be in the limelight, I don’t want to be the one in the spotlight. I’d rather be the observer.”
Abigail Cain
Related Stories