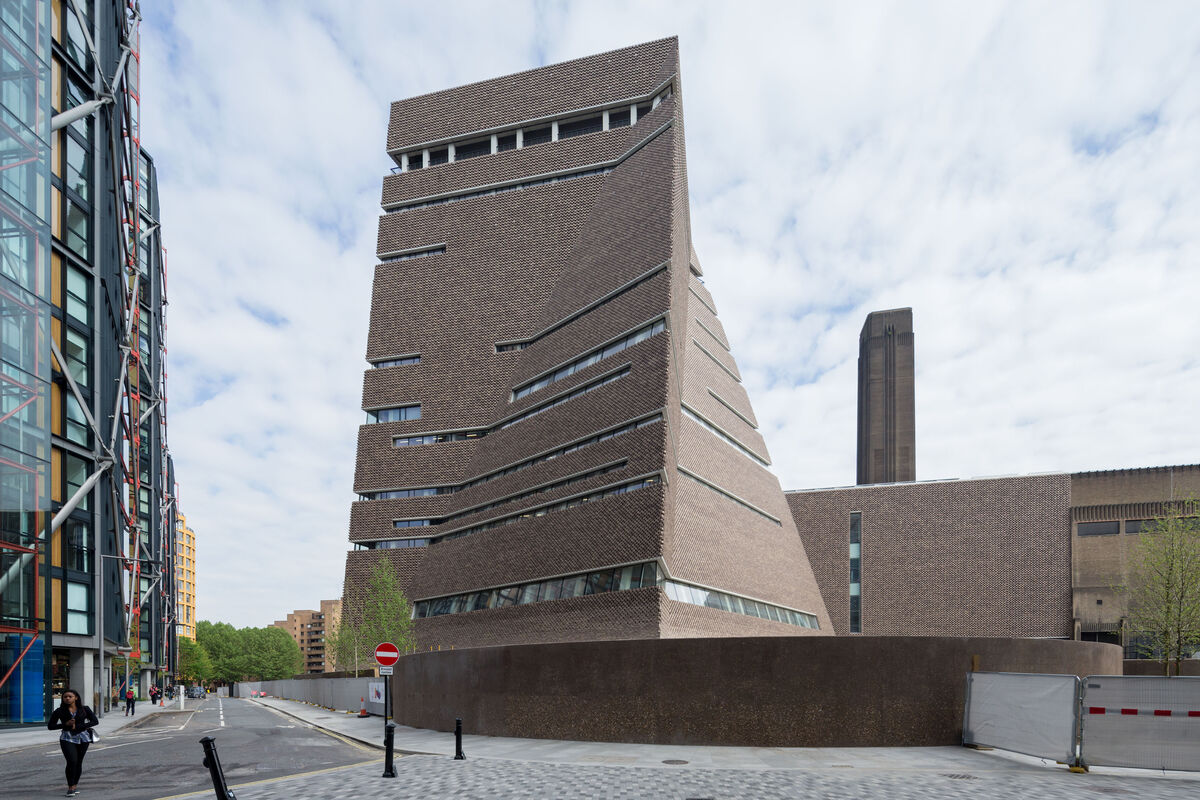 A recent survey revealed that millennials are more interested in discovering art through social media than through museums, suggesting the way that art is experienced may undergo a seismic shift in years to come. Yet the Tate Modern’s expansion demonstrates an effort to combat that reality by appealing to younger audiences.
Hot on the heels of the government’s first White Paper on culture in half a century (in which Ed Vaizey, Minister of Culture, calls for “not a revolution, but an evolution” in the arts), the museum will open its ambitious £260 million expansion in mid-June. Aside from accommodating an annual visitor base that is twice as large as the number it was designed for when it first opened in 2000, and making room for a collection that has grown by more than 50 percent over the last 16 years, the renovated space is intended to offer a more welcoming environment that gives performance greater prominence in the museum.
Inside its imposing,
Brutalist
exterior (think: superstructure of an Imperial Star Destroyer), the new wing promises to be all airy spaces and public access. The work of architects Herzog & de Meuron, designer Jasper Morrison, and landscape architect Günther Vogt (the team behind the original Tate Modern conversion from Bankside Power Station to art museum), the expansion represents not only a physical extension for the Tate Modern, but also an image rehaul. There’s a heavy emphasis on art moving from a static, “traditional” museum experience to a more fluid and accessible environment. 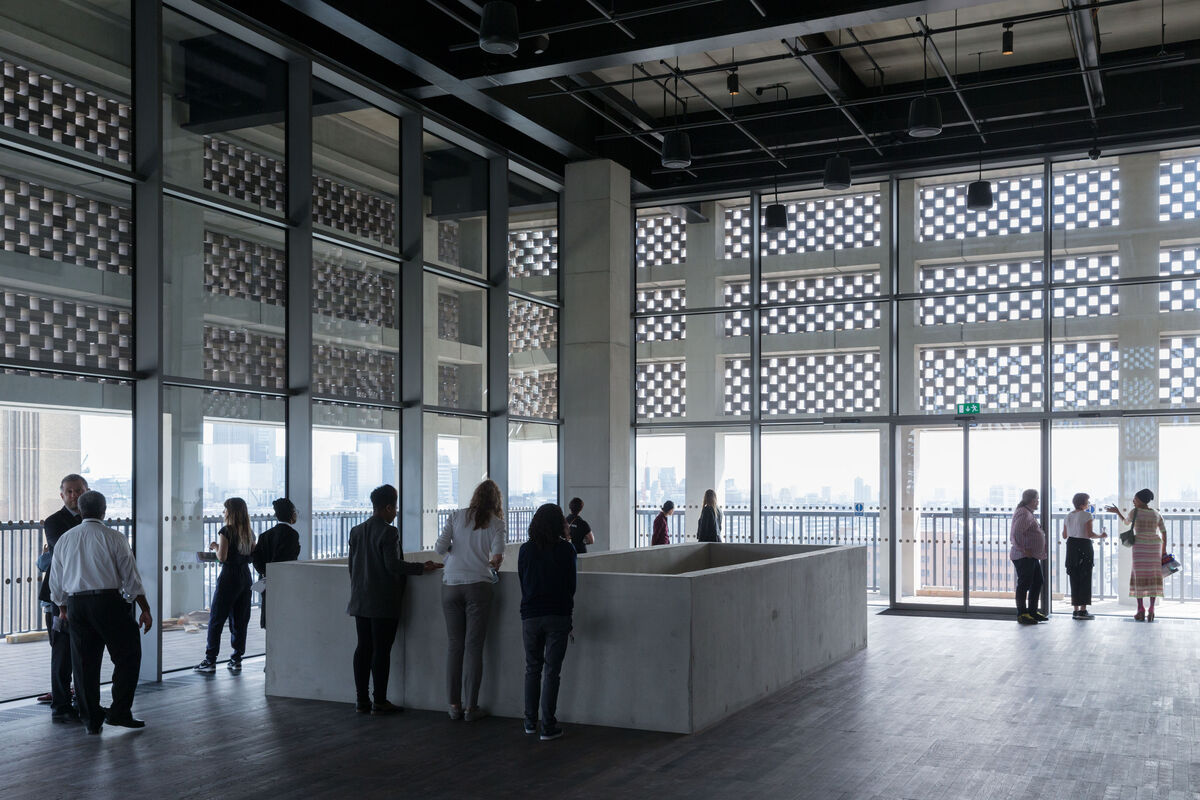 Most obviously, this includes the brand new Switch House (the Star Destroyer), built to the south of the original building and offering 20,700 square meters of extra space, increasing the museum’s gallery spaces by a staggering 60 percent and allowing for a complete rehang of the Boiler House. This rehang, explains Tate director Nicholas Serota, is designed to emphasize “the way in which art has changed and how the way in which we see the world has changed.” As Senior Curator of International Art (Performance) Catherine Wood says, art is now “an experience to be shared, live, with a community of participants. The status of the art object has shifted as a result, becoming one element within a social configuration, and experienced through time.”
The focus on fluidity is key. This quality is achieved through walkways and a bridge to join the existing Boiler House (six floors) to the Switch House (10 floors), positioning the Turbine Hall at the center of the new development.
Ai Weiwei
’s Tree (2015) greets visitors across the bridge, and, through a public terrace, piazza, and the new Clore Learning Centre, as well as the landscaping of other public spaces, the new Tate seeks to fully integrate into the community as a living organism. This experience will be enhanced by a wayfinding app for visitors to use and “Explore” spaces, designed to provide an immersive encounter with the museum’s galleries. The building will metamorphose, its organizers hope, from a self-described “closed industrial landmark to an accessible public forum,” one that taps into the half million visitors who pass through the area each week.
So how do the millennials come into the picture? With an increasing youth demographic (over half of Tate Modern’s visitors are 35 and under) and the rise of social media and new modes of public interaction, Tate is working to evolve audience engagement. According to a recent survey on museum attendance in 2015, Tate Modern came fifth worldwide, with 4,712,581 visitors (twice the number that enters New York’s MoMA each year), but this is down by a million from the previous year’s report. If most of their attendees are millennials, it makes sense to grow and cater to that audience.

Advertisement
In today’s media-saturated environment, where attention spans come at a premium, it seems that luring in the under-35s calls for the chance to chill out with lattes in specially designed hang-outs, and the opportunity to cut through all the white noise with something new for the senses. Today, experiential entertainment is the new frontier: Museum-goers want to be included. Artist
Tim Etchells
, who is heading up the first leg of the Tate Modern’s artistic collaboration program, Tate Exchange, feels the initiative will prove Tate can be interactive and exciting, “rather than a storehouse for old stuff.”
At a time when concerns are being raised about the sustainability of the voracious pace of global museum expansion (a recent report by The Art Newspaper revealed that U.S. museums spent $5 billion on expansion projects between 2007–14, in spite of a shrinking economy), the Tate’s branding as a cohesive and accessible public space falls well within the official government line, which stresses the importance of culture being accessible to all. In its 2015 Diversity Action Plan, the Tate has also specified the importance of reaching a broad audience, if the museum “is to remain relevant to contemporary society.”
This is why performance is so important. The opening in June will see a three-week live art program, including a specially commissioned 500-voice-strong choral work, as well as performances by sound artist
Tarek Atoui
and Romanian duo
Alexandra Pirici
and Manuel Pelmus. Over 3,000 school children are to attend a special preview. Perhaps the most hotly anticipated element of the expansion, the Tate Tanks—the museum’s primary platform for performance—are set to reopen. Originally the power station’s oil chambers, the raw industrial spaces were first used in 2012 for a 15-week program of live events. They are considered to be the “world’s first museum spaces dedicated to live art and performance,” and last year’s well-attended collaboration with Boris Charmatz / Musée de la danse proved just how popular the art form is.
“The space of the museum allows for a different kind of exploration of what ‘performance’ means in the field of art,” says Wood, “how it activates and challenges that field, and how art often ingests other disciplines as readymade formats. I think people are drawn to performance because it offers a sense that things might be changed, re-invented, built from scratch—and that they could be part of it rather than simply looking at it.”

One could argue that, in a city such as London, there is no shortage of dance and performance-dedicated spaces—why must Tate place its own emphasis on these forms? “Our interest in performance comes from a specific perspective emanating from art history,” explains Wood. “We are not simply replicating programming that would (or could) be done at other venues in London. Artists respond not only to the specific and unique spaces of Tate, but also to the attitude of the art museum, and its ghost-history of previous displays and exhibitions.”
What this means, Wood says, is that the museum space itself allows for a new kind of stage—one within the context of visual art. “Its form takes on a relationship to painting and sculpture, and our attention to encountering it is relatively ambient or dispersed rather than static and focused, as in a theater,” she says.
As New York’s new Whitney Museum and Tate Modern attest to, museums are seeking innovative ways in which to engage with audiences and remain relevant, and there seem to be no lack of investors willing to fund a new wing or extension, although the Tate is currently still short of its target budget by several million. (Serota is confident the remaining funds will be raised as the building nears completion.) The Tate is helping to pave the way for a new model of audience engagement through architecture, digital initiatives, and an emphasis on live art. Now it remains to be seen if its target millennial audience will rise to the occasion.
Anna Wallace-Thompson
Related Stories