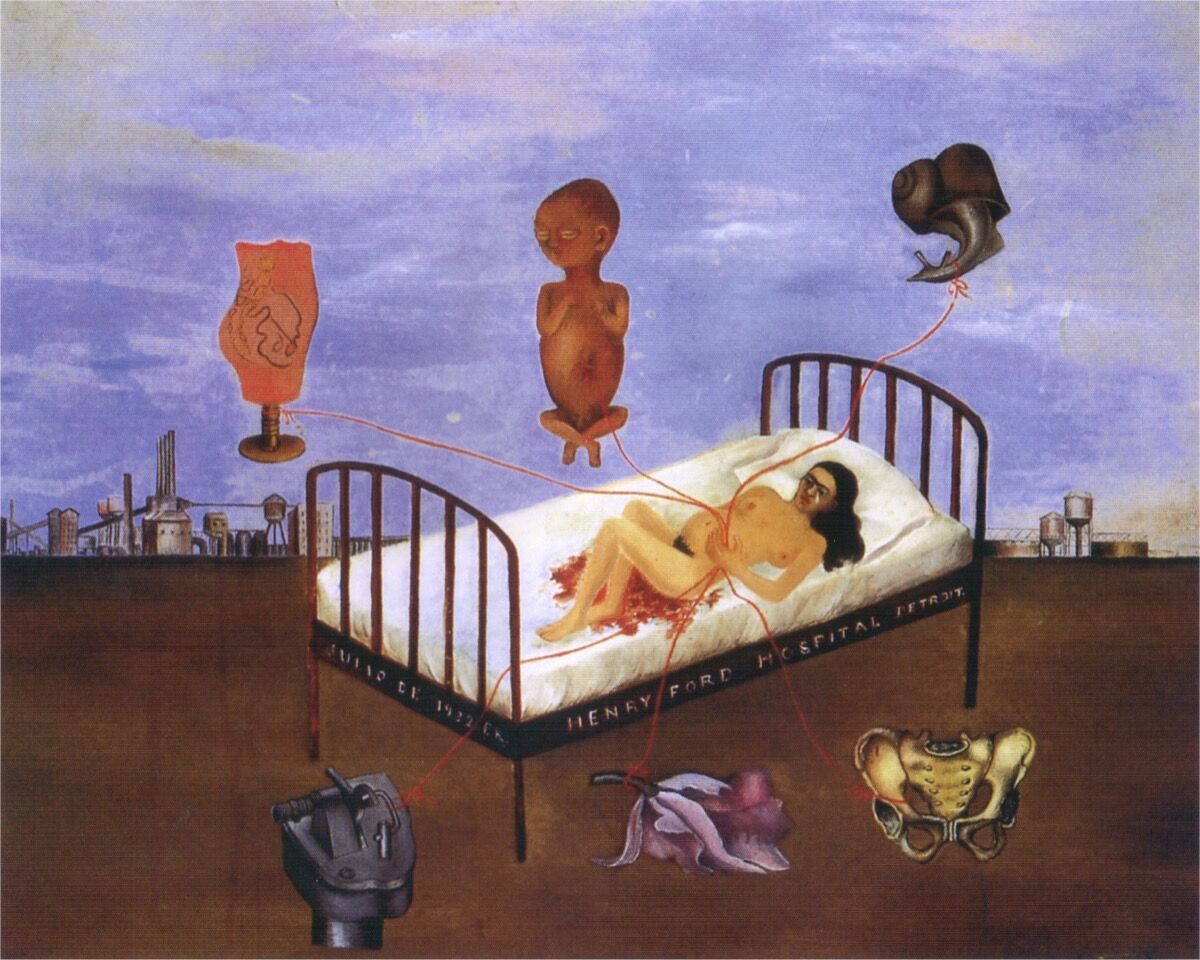 Last week, as the Mexican holiday Dia De Los Muertos approached, I found myself eyeing images of
Frida Kahlo
’s more macabre paintings. One, called Henry Ford Hospital (1932), showed the artist lying naked on a hospital bed surrounded by floating objects: a flower, a snail, and a fetus.
The resemblance of the work to other small, mystical, and gruesome paintings I had once happened upon in a vintage store was striking. As I pored over the little panels, filled with images of people prostrate on hospital beds, pursued by evil forces, or ejected from the backs of unruly horses, the shopkeeper told me they’d originated from a Mexican church altar. It sparked my curiosity—what were those tiny paintings, rendered on tin and featuring childlike portraits of people in strife? And why the likeness to Kahlo’s work?
The small panels, usually measuring around 11 by 15 inches or less, were ex-votos. The abridged translation of the term reads something like “the vow made” or “in gratitude or devotion,” but this style of painting deserves a lengthier explanation. As I delved into my research, I found that these types of narrative ex-voto paintings originated in rural Mexico and often ended up in Mexican churches as offerings of gratitude to various Catholic saints. 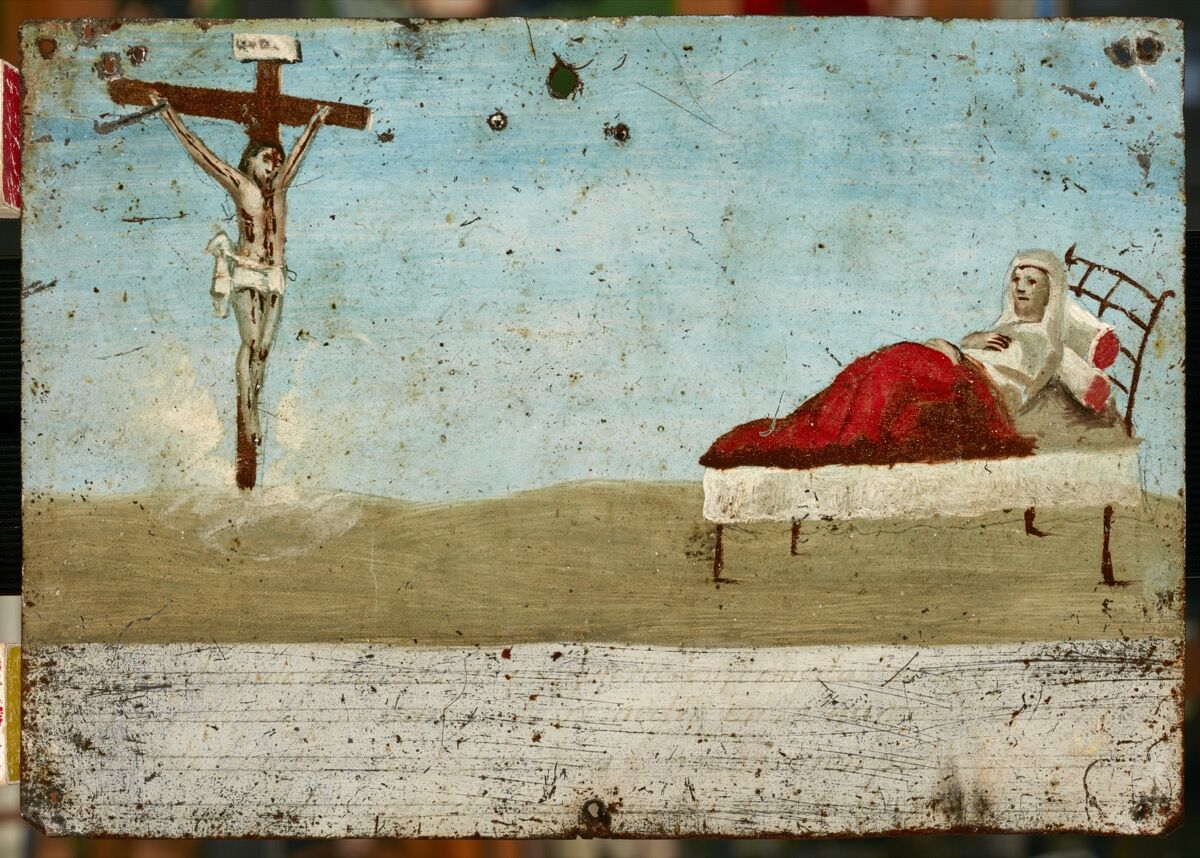 A person wishing to thank a higher power, usually for a miraculous intervention that had saved them from certain death or interminable suffering, would ask a local artist to paint her story. The resulting panel would show an image that captured the commissioner’s anguish, along with the divine presence of her savior, usually floating ethereally in space. The compositions are usually bordered by a story, penned in looping cursive or scribbled in thick paint, describing the tale.
In one ex-voto that I happened upon, a man stands in his pajamas, in a field rimmed by mountains. He’s frozen in fear and staring at a UFO that radiates a purple beam of light containing a big-eyed alien. Over the man’s head, on a puffy cloud, levitates the Virgin de Guadalupe. The few sentences painted below the scene reveal that the saint rescued the man from abduction and the life of a mute: “The day January 14, 1965 with this I give the most sincere thanks to the Virgin of Guadalupe, who gave me the miracle of regaining speech after I saw a ship with an extraterrestrial coming out of it and was left speechless.” It was signed “Sr. Juan Manuel Gutierrez..., 20 April of 1984.”
The piece, like all the ex-votos I’ve come across, is intensely personal—filled with one man’s fears, idiosyncrasies, and spiritual leanings. But the ex-voto tradition began long before the ’80s, or even Kahlo’s time in the 1930s and ’40s. In Mexico, they first cropped up in the 16th century, during the colonial era, as Catholicism spread like wildfire across Latin America. The practice became especially popular, however, in the throes and aftermath of Mexico’s successful battle for independence from Spain in the early 1800s, and again saw a renaissance during the early 1900s, during the Mexican revolutionary war. 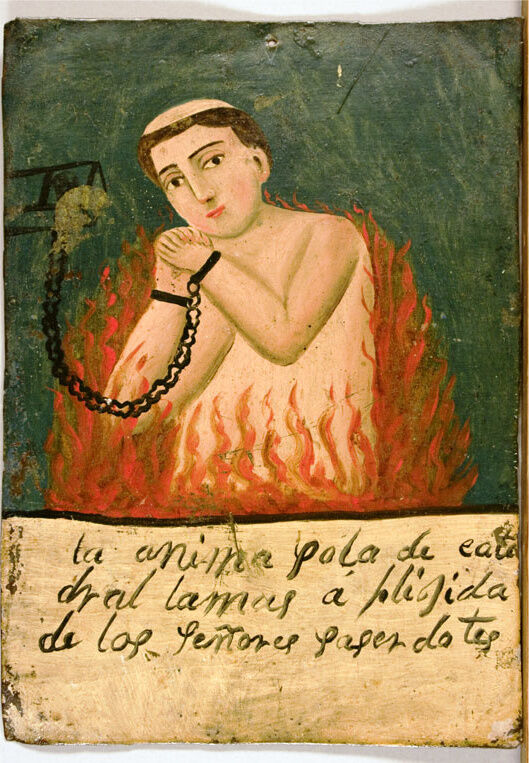 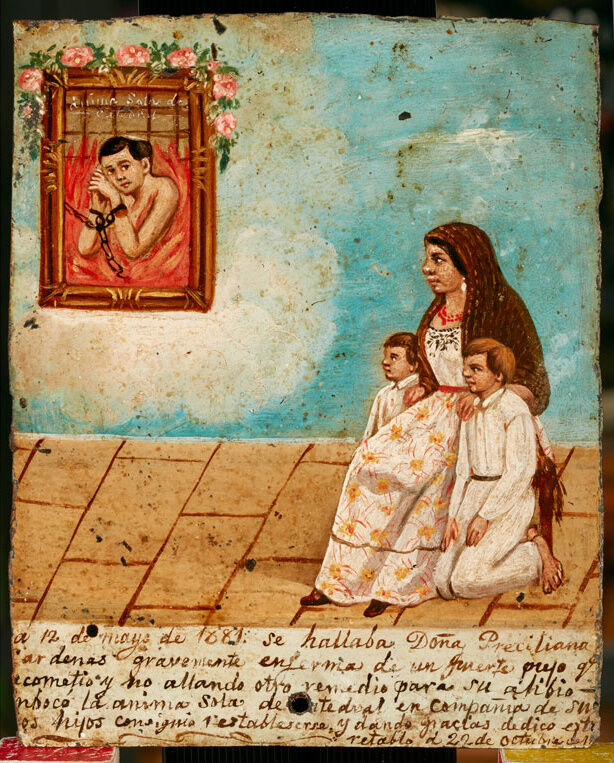 Advertisement
In one ex-voto, housed in a monastery-turned-museum in Mexico City, a bloody, messy battle fills the composition; but look closely, and you’ll see a small saint hovering in the left-hand corner. The inscription reads: “In San Nicolás on 2 December 1914, Andrés León was in great danger that day of being killed in combat. His mother invoked the miraculous Saint Nicholas and he was saved.” Amid the fear and uncertainty of wartime, ex-votos doubled as a means of communication and thanksgiving between a human and her god and saints.
The powerful mingling of Mexican culture and spiritual life—the earthbound and the divine—that the ex-votos contained caught the attention of avant-garde artists after the Mexican Revolution. Artists like
Diego Rivera
and Kahlo sought to move away from the rigid academic painting that took precedence in Mexican art schools at the time. In Mexican folk art, as in the ex-votos that filled the churches where they were raised, they saw an alluring alternative: a style that embodied both individual expression and faith.
Rivera and Kahlo became avid collectors of the little tin paintings. “The anguish of our people caused this strange flowering of painted ex-votos to rise up slowly against the walls of our churches,” Rivera once said, with his signature romantic bravado. But it was Kahlo who incorporated the surrealistic qualities of ex-voto painting into works that fused mysticism and mortality, with allusions to the earthly—making reference, perhaps, to the torment of the artist’s own physical afflictions. 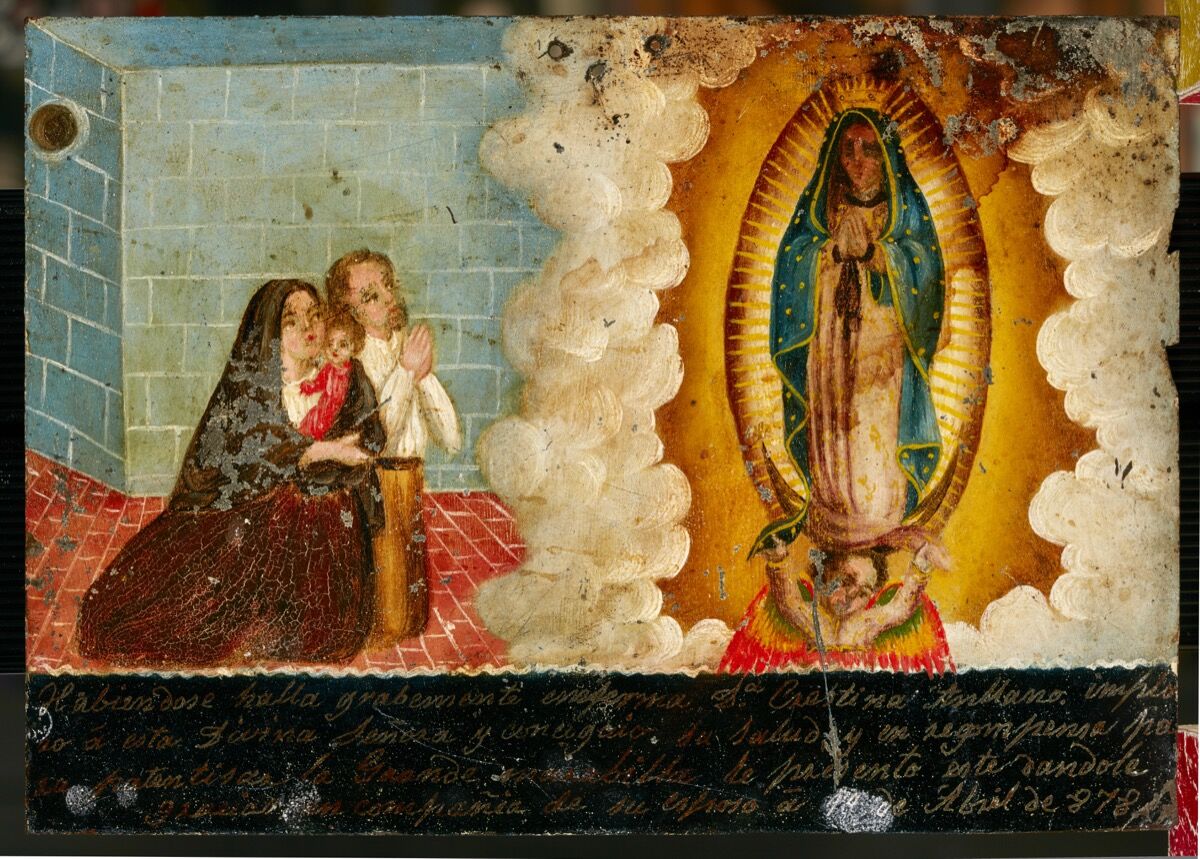 Over the course of her life, Kahlo collected over 400 ex-votos, and many of them can still be seen hanging on the walls of her famous Blue House in Mexico City. One of the ex-votos in her cache bears striking resemblance to her Henry Ford Hospital. In the small votive painting, a woman lies on a bed while a man bearing a knife hovers over her. But an elaborately cloaked saint is also in the room, and the text tells us she came through: “I thank the Blessed Virgin of Talpa for the miracle that saved my life the day. 3rd of October 1934. M. Aragon.”
Kahlo’s own Henry Ford Hospital was painted two years earlier, in 1932. At the time, the two artists wouldn’t have known each other, but there is nonetheless a powerful intimacy between the paintings, conceived by artists who shared a language of individual expression and spiritual salvation.
Alexxa Gotthardt
Related Stories